A century after his grandfather’s death, August Miller keeps the artist’s legacy alive

Oscar Miller was among the most prolific artists to ever call the East Bay home. Born in Manhattan in 1867, he died in Providence in 1921. In the intervening years, his travels took him throughout …

A century after his grandfather’s death, August Miller keeps the artist’s legacy alive 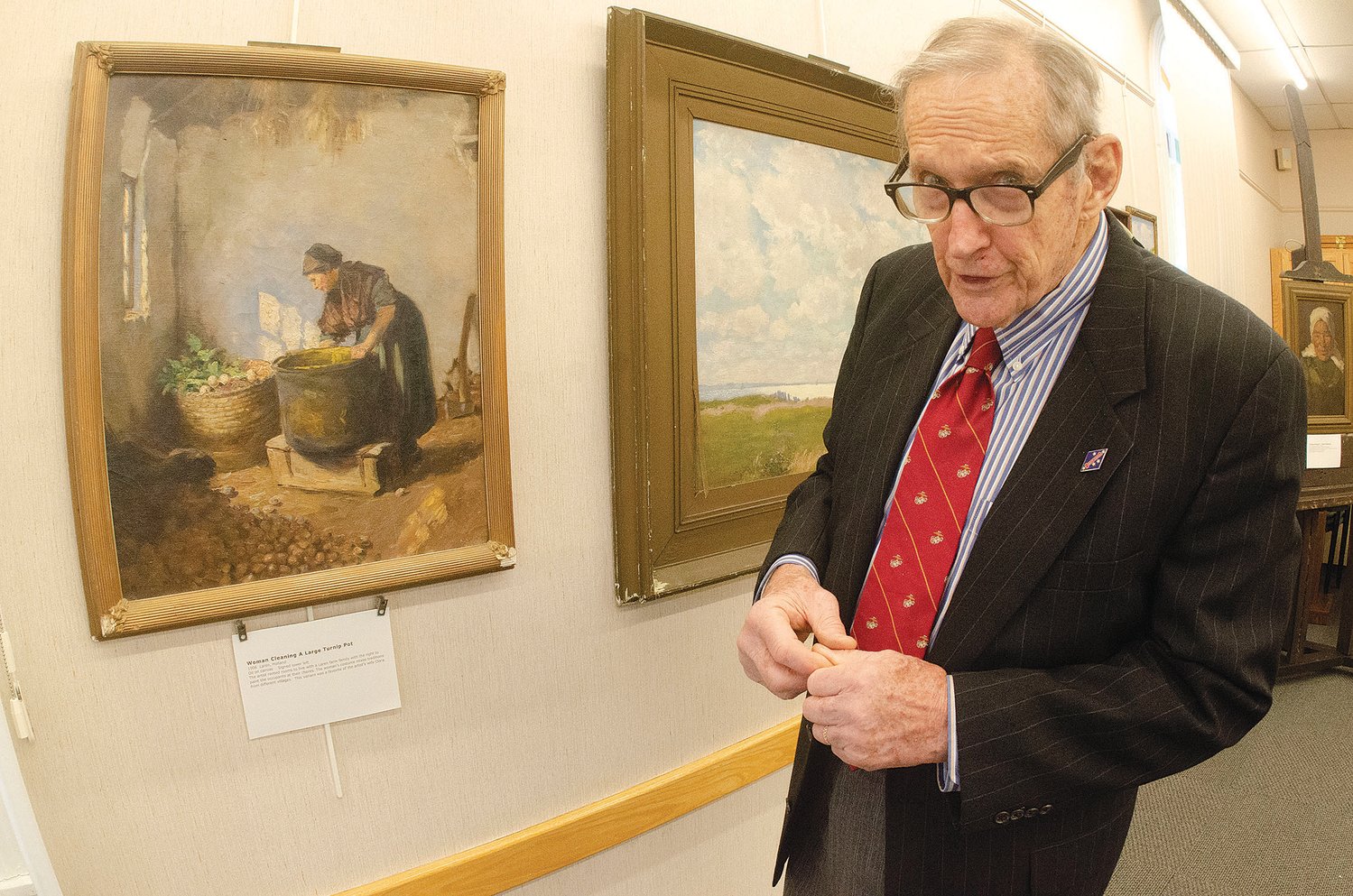 August Miller with “Woman Cleaning A Large Turnip Pot,” which Oscar Miller painted in 1906 while staying with a family in Laren, Holland. Oscar rented rooms from the family along with permission to paint them going about their daily tasks.
Richard W. Dionne Jr. 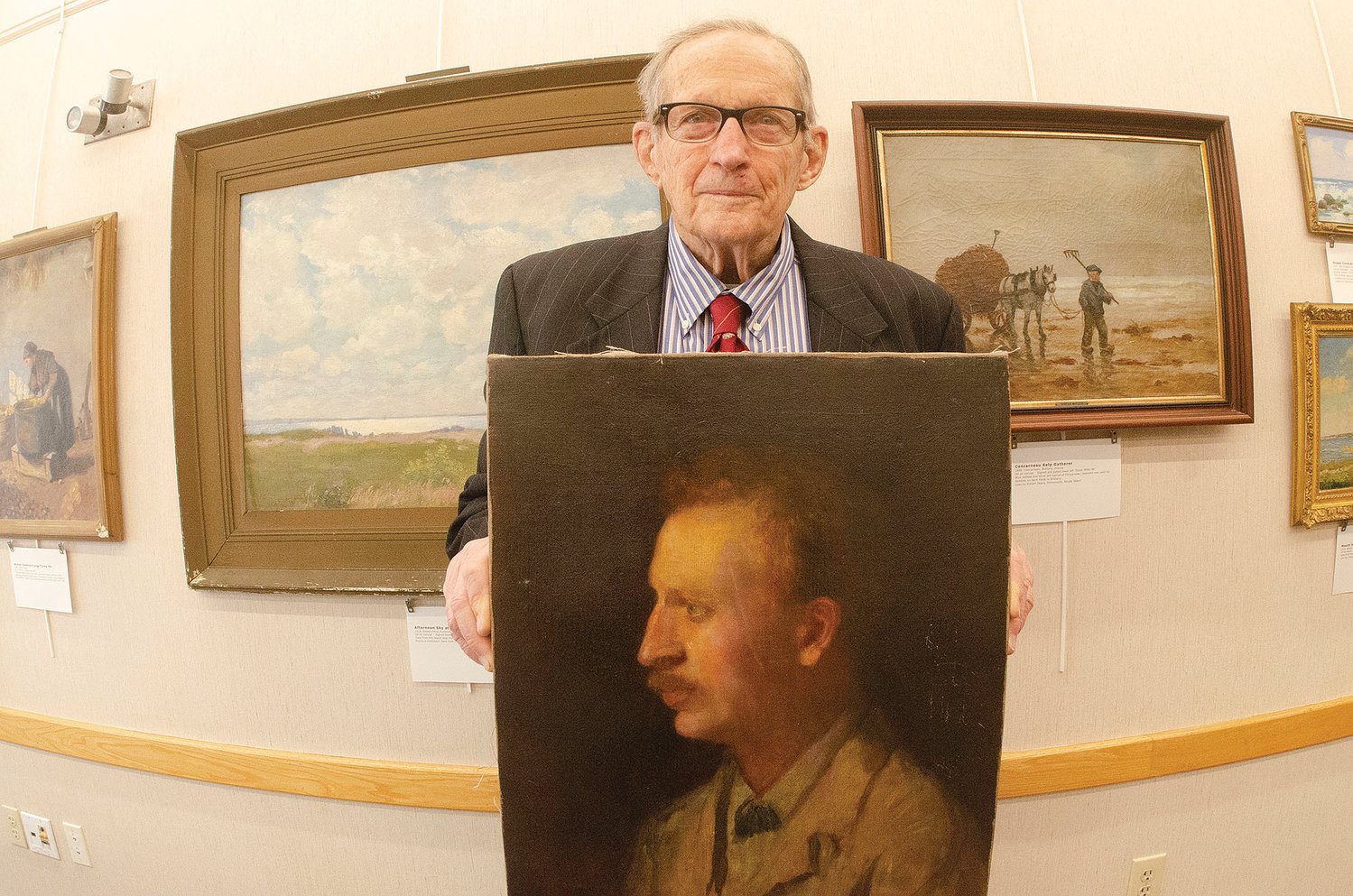 August Miller holding a portrait of his grandfather, Oscar Miller, painted by Emmanuel Fox. The other 14 paintings in the exhibit, on display through January at the Portsmouth Public Library, show Oscar’s impressive range of style and technique, developed in his years of travel throughout the U.S. and Europe.
Richard W. Dionne Jr. 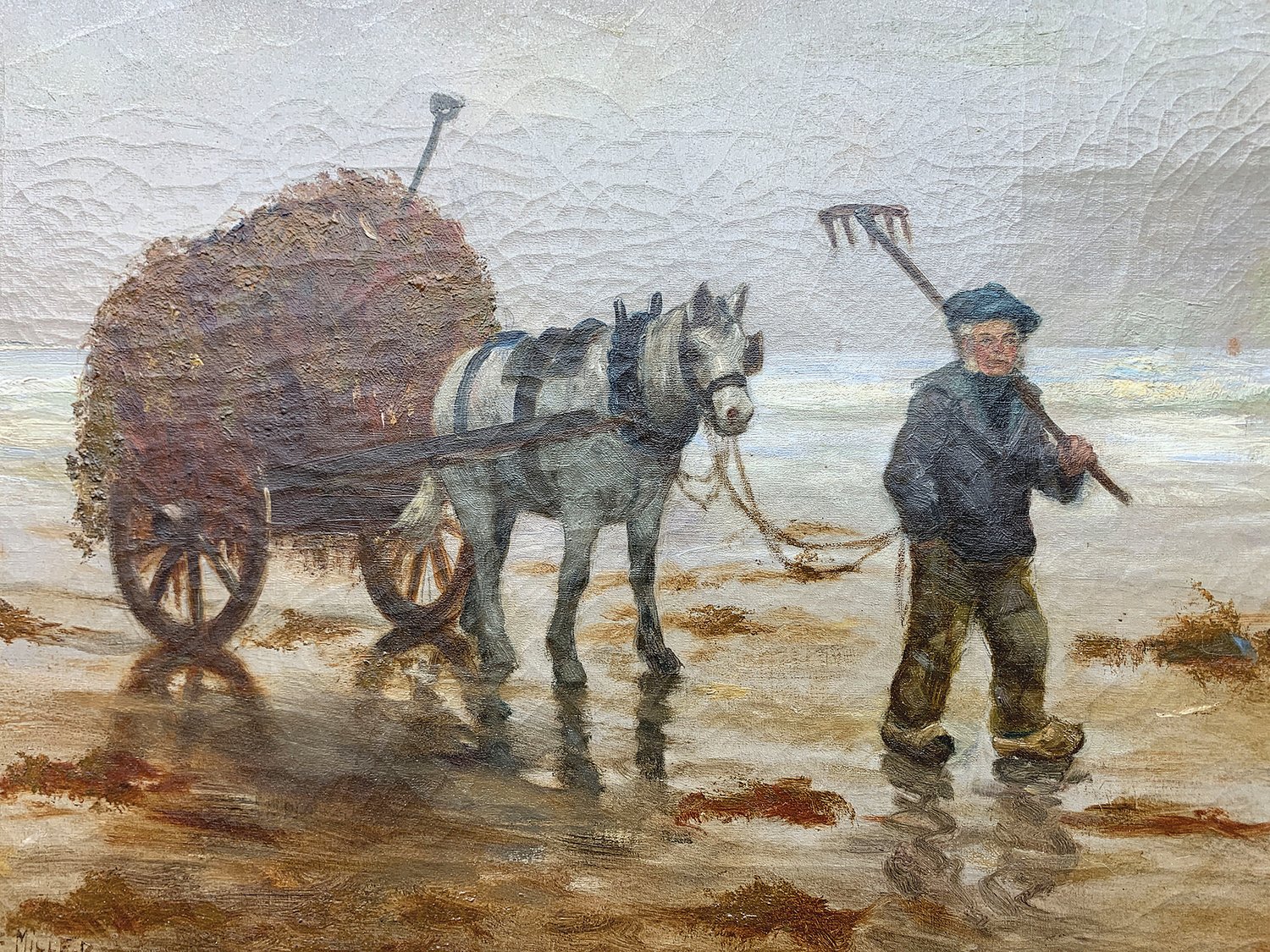 This 1896 oil painting of a kelp gatherer would have been a familiar sight to Oscar Miller during his time in Concarneau, a commune in the northwestern French department of Brittany. Local farmers would collect the seaweed for use as fertilizer in their fields.
Richard W. Dionne Jr.
Previous Next
Posted Wednesday, January 19, 2022 12:00 pm

It’s a work of art following in the trail of another artist. It’s a human story, an adventure, and a journey. And I’m 86 years old so it’s time to finish it.”
August Miller
By Christy Nadalin

Oscar Miller was among the most prolific artists to ever call the East Bay home. Born in Manhattan in 1867, he died in Providence in 1921. In the intervening years, his travels took him throughout Europe, especially France and the Netherlands, where he created some of the most enduring of the 1,500 or so works credited to him over the course of his lifetime. He exhibited at institutions on both sides of the Atlantic, including the Art Institute of Chicago, Le Salon de la Societe des Artistes Français, Museum of Fine Arts Ghent, Pennsylvania Academy of Fine Arts, Providence Art Club, and the Society of American Artists in New York. Also raised partly in New York, Oscar’s grandson August Miller is now a full-time resident of Portsmouth. Though he was born 15 years after Oscar’s death, the strength of the vivid stories, relayed by grandmother Clara Brownell May, kept Oscar alive for young August, who picked up the thread as an adult.

“I grew up with this legend who died 15 years before I was born,” said August.

A unique community by the ferry

Oscar’s talents were apparent at a young age, and he was given a paintbox by an older sister, which he would use for the rest of his life. By all accounts he was an unusually tidy man, particularly for a painter. He worked in a coat and tie and did not wear smocks; a portrait artist primarily, he was fastidious about keeping his hands clean, so he could shake hands with his clients.

Invited to paint in Portsmouth by Sarah J. Eddy, Oscar was introduced to Clara, a pianist, intellectual bohemian, and suffragette whose mother came from a prominent Portsmouth family, the Mitchels. Clara is said to have told Oscar that if she were to marry an artist, she would at least need a roof over her head; and before their September 1899 wedding, Oscar would build the family summer home in Portsmouth, at Porters Lane, on farmland belonging to the Mitchel Family

A transportation hub, the Bristol Ferry neighborhood had nurtured a community of artists (including two of Clara’s aunts), with no less than six artists’ studios in the area. It was also a center of local suffragette activity, of which Clara, Sara J. Eddy, Mary Ballou, and Julia Ward Howe were among the most active and prominent members. “My grandmother was 6 feet tall, and ramrod straight,” said August, who recalls meeting Eddy as a child. “It was a community of bright, energetic women; the heritage of Anne Hutchinson was here.”

“They were liberated women before there was women’s liberation. They were forces of nature.”

An American painter in Europe

In 1899 Oscar went back to Europe to paint; August’s father, August Brownell Miller, was born in Paris in 1902. The young family would travel between the United States and Europe for many years, generally summering in Portsmouth while Oscar would continue to develop his skills spending time in artist colonies around the Continent. At one point, en route to study at the Academie Julien in Paris, the boat Oscar was on lost its propeller.

Rather than arriving promptly near Paris, the vessel was towed to Ireland and Oscar spent some weeks traveling overland, visiting artist colonies in England en route. According to August, Oscar studied with artists in colonies from Fontainebleau to Rotterdam, learning techniques from schools such as The Hague school, the Barbizon School, and with artists including Paul de Longpré. “He became friends with the famous artists of the day, and a master of a lot of varied techniques,” said August. “I’ve seen paintings that I did not even realize were his, until I saw the signature.”

Oscar would come back to the United States for good just before World War I; sadly, his life would be cut short. “He lost his faculties and was committed to Butler Hospital,” said August. “He ground his own pigments, which likely lead to heavy metal poisoning.” Oscar died at age 54, just as he was getting an international reputation.

After Oscar’s death on Dec. 18, 1921, Clara would move to Bristol and become active in the local community and society on that side of the passage until she died in 1953 at the age of 87.

From Korea to Ann Arbor

August himself grew up in both New York and Portsmouth; his mother and one of his two sisters died in a drowning accident off the beach at Porters Lane when August was only 9, and his father, he said, was never the same after that. After graduating from Tabor Academy, August considered a number of different paths and chose to join the Marine Corps, crediting his experience with the training regimen at Parris Island with preparing him for anything. “It was invaluable experience,” he said.

He spent one year in Korea with the 5th Marine Regiment, where he became curious about Buddhism. “I saw what war could do,” he said.

After leaving the Marines, August went to Ann Arbor, Michigan with plans to study naval architecture but quickly realized he was not going to be able to spend the next several years in a drafting room, drawing boats. Academically, he pursued a degree in chemistry; athletically, his drive and focus nearly landed him a spot on the Olympic wrestling team. August would continue his professional life in the Ann Arbor area and would ultimately reach the highest levels of another sport entirely: sailing. He finished second in trials for the Olympic Sailing team in 1976, while also working as a chemistry professor. That near-miss ended up being the start of a legendary coaching career as an international Olympic coach for the Finn Class, a singlehanded one-design dinghy, first designed in 1949 for the Helsinki Olympics. Ultimately, August would coach Olympians in nearly every class; he still competes, and plans to race in the Finn Master's World Championship in Helsinki, July 1-8, in celebration of the 70th anniversary of the Finn monotype's first appearance in the Olympics.

Around 1972, August realized that his father was aging, and struggling to tell stories — stories that August did not want to see lost to time. Though his mother had begun a biography of Oscar, she died before finishing it. August began the process of collecting these stories by giving questions to his father’s caregivers to ask him at times of lucidity, and was pleased to find that the answers they collected were consistent.

August traveled to France to confirm the truth of some of these stories. One in particular that he found difficult to believe involved his father telling of sand in the streets of Paris on his walk between Oscar’s studio and his school — sand that he claimed was left there after the local prison held executions by guillotine some mornings. A visit with a group of French prison guards confirmed the veracity of his father’s stories.

August’s sailing connections became invaluable as he worked to research Oscar’s legacy, when Bristol’s Halsey Herreshoff introduced him to J. Carter Brown, a Rhode Islander who served as director of the National Gallery of Art from 1969 to 1992. “It was Carter who really told me how to approach this; I thank him for opening doors and giving me the structure.”

Over the past 50 years of research, August has developed a network of artists, historians, gallery directors, and librarians that he estimates numbers 400 or more. “Many of these are friendships that persist,” he said, citing Swedish artist Cliff Holden, who is one of many people he credits with helping him understand his grandfather through his art.

In his travels researching Oscar, August said he often felt as though Oscar’s hand was on his shoulder, guiding him — like the day he just happened to look at the right spot at the right moment, and recognized a tree in Fontainebleau Forest that was painted by his grandfather decades earlier.

In honor of the 100th anniversary of Oscar’s death, August curated an exhibit that is hanging at the Portsmouth Public Library through January. There are 15 paintings total, one of Oscar and 14 by him, each in a different palette and style, showing his incredible range. August plans additional local exhibitions, including one at Linden Place in Bristol, with dates to be determined.

A Gallery Reception will be held at the Portsmouth Public Library from 5 to 7:30 p.m. on Monday, Jan. 24.

“It’s a work of art following in the trail of another artist,” he said. “It’s a human story, an adventure, and a journey. It’s about the threads that come together. And I’m 86 years old so it’s time to finish it.”