Barrington Police are investigating a house burglary where a significant amount of cash, jewerly and expensive hand bags were reported stolen. Following are excerpts from the Barrington Police log of … 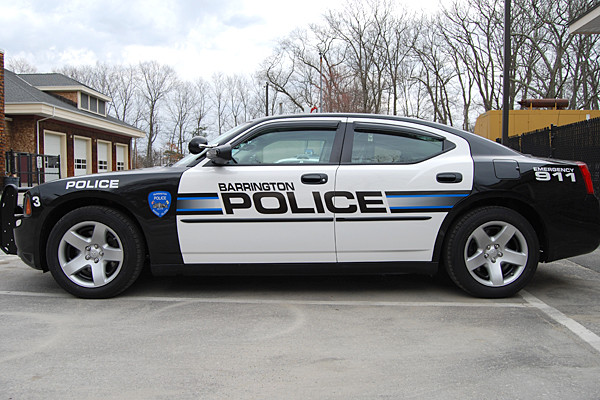 Barrington Police are investigating a house burglary where a significant amount of cash, jewerly and expensive hand bags were reported stolen. Following are excerpts from the Barrington Police log of Aug. 1 to 8.

A man came to the station at 12:44 p.m. to report that he had stopped at Dunkin’ Donuts on County Road, gone into the restaurant and left his windows down with his car unlocked. When he returned, his iPhone 12, which had been sitting in the car, was missing. Officers searched the area and looked for surveillance video, but there was no evidence to be found.

Officers responded to Vineland Drive for reports of a domestic argument in progress at 5:52 p.m. It was a verbal argument only and there was no reason for further police involvement.

A young woman from Knapton Street contacted police at 10:40 p.m. after being involved in a prank-calling incident. First, she received a call from a blocked number, and the caller provided details about where she lived and worked, and that she owned a hot tub. The caller left a callback number. When she followed up with that number, she learned that apparently a group of boys were prank-calling people and giving out someone else’s call-back information.

Officers were called to the parking lot behind the Daily Scoop ice cream shop for a report of someone allegedly doing drugs on one of the back picnic tables a little after 8 a.m. They found a 17-year-old male who quickly put something in his pocket when officers arrived. It looked like he probably was smoking marijuana. Officers spoke to him but did not press charges.

An officer stopped a vehicle for speeding on Middle Highway at 11:35 a.m. Because the car did not have an active registration, the officer followed the driver back home and seized the plates.

Officers responded to the Dunkin Donuts on County Road at 2:47 p.m., after a member of the town’s fire and rescue department alerted them that a man who was in the restaurant was requesting a free doughnut and then threatening employees when they did not comply. He eventually paid for the doughnut with Apple Pay before leaving. He left the scene before officers arrived and was not found.

Officers were called to a Greenville Drive residence for a domestic dispute in progress at 6:44 p.m. Two adults were arguing after a dog bit a girl living at the residence. Police helped settle things down and found no cause for further action.

A Regal Point resident called the station at about midnight after a Ring camera caught a young woman sitting in their driveway, with no shoes on, for about 15 minutes before walking off. Officers investigated and said the description matched the description of a woman they had encountered earlier in the evening, who had taken off her sandals because they were giving her blisters.

An officer took a report of a dog bite at a Sowams Road residence. A dog allegedly bit a visiting physical therapist doing in-home services.

Officers were called to Hamilton Avenue after a woman complained that a neighbor on her back property line had cut bushes and left a large pile of debris behind.

A Whipple Avenue resident called police after finding two bicycles in his back yard more than a week prior. The man had left the bikes leaning against a tree in case anyone came to claim them, but when no one did, he eventually called police to take them. They were brought back to the station.

A resident on Standish Avenue reported coming home from vacation and finding scuff marks on a car in the driveway. It appeared that someone might have struck the vehicle and then attempted to cover up the damage with spray paint.

At 5:47 a.m., a caller in the area of County and Federal roads reported hearing a loud screech and bang. There were no immediate signs of an accident, but officers eventually found skid marks and a damaged guardrail in the area.

Police took a dog into custody after someone complained that it had been barking for hours in the back yard of a Hemlock Drive residence, and it appeared no one was home. The investigating officer determined the 18-year-old dog looked fatigued, but there was no evidence of abuse and the dog was later returned to its owner.

A 28-year-old woman from Warren came to the station to report a damaged windshield, the casualty of a loose rock from construction along the Wampanoag Trail.

One motorist was taken to Rhode Island Hospital after complaining of back pain, following a rear-end collision at the light in front of the Barrington Shopping Center at 3:11 p.m.

Burglars left with a significant heist from a home on Church Street. Police were alerted at 10:55 p.m. by the owners, who came home after being away for about a week. They found the back door to the garage shattered and the house disheveled. It appeared that every drawer and closet had been searched and ransacked. Taken were a significant amount of cash, jewelry and high-end hand bags, such as Luis Vitton, Coach and Chanel. Police were able to gather some evidence, and the case remains under investigation.

An Ellis Street resident called the station after waking to find that a tree had fallen on their Honda overnight.

A Nayatt Road resident called police at 12:13 p.m. to allege trespassing after three people, one a neighbor from the immediate area, walked across a seawall at the rear of his property. The three allegedly had a disagreement with a hired security guard, who tried to prevent them from stepping on the seawall. Officers later caught up with two of the people who had been walking along the shore near RISD Beach and confirmed that they did not pass any closer to the resident’s property than the seawall itself. Officers took no further action.

A Meadowbrook Drive resident called police at 3:44 p.m. to report that a boater had tied up to his dock and was using the dock without permission. The boat appeared to be in need of repair and was towed off the dock a short time later.

Barrington was called to assist after a Riverside teenager told an East Providence police officer that he had been threatened with a brick by a man on a bicycle in Barrington. Officers searched the area but did not find anything suspicious.

Ask the candidates: How would you make the East Bay better?