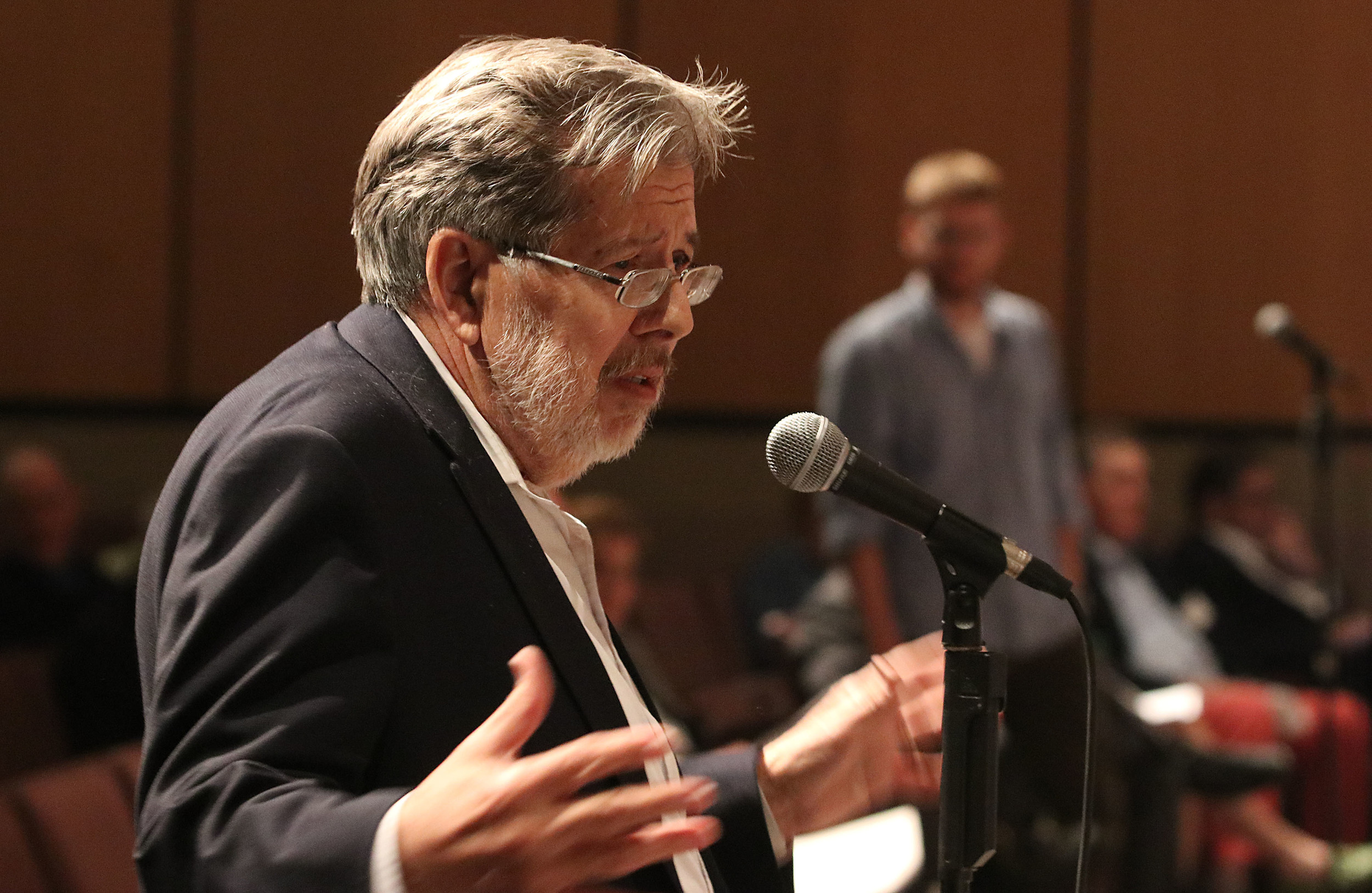 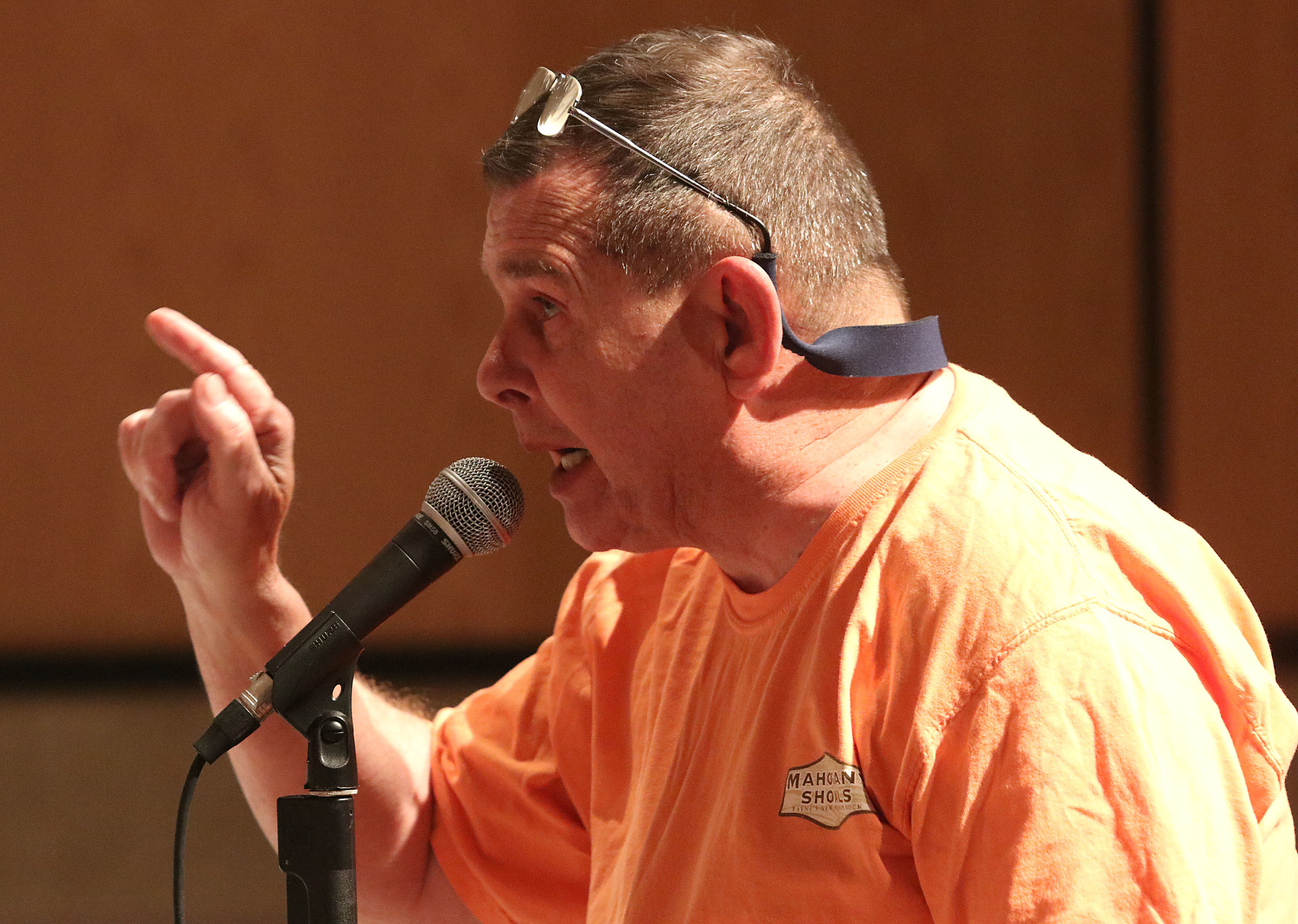 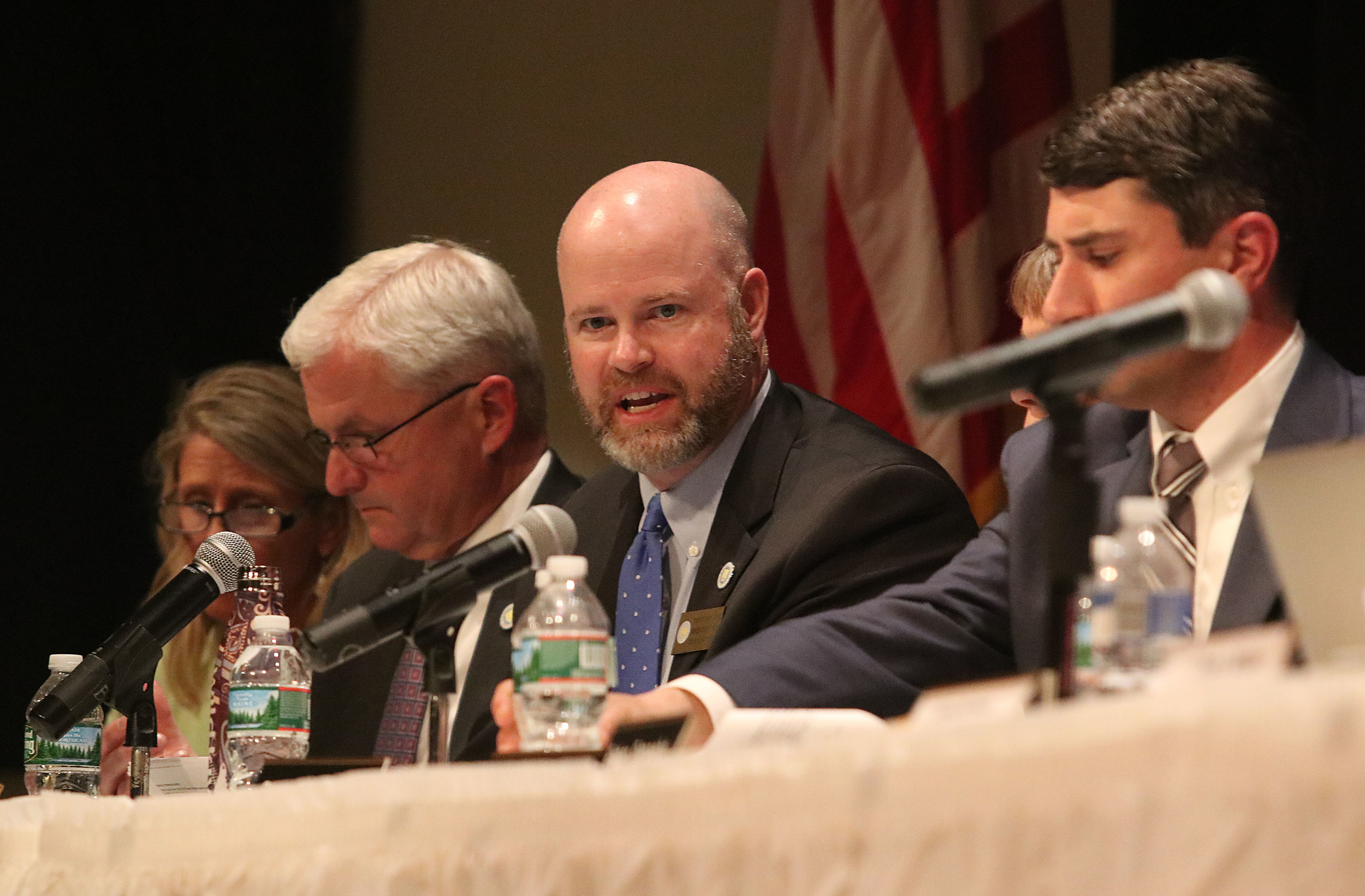 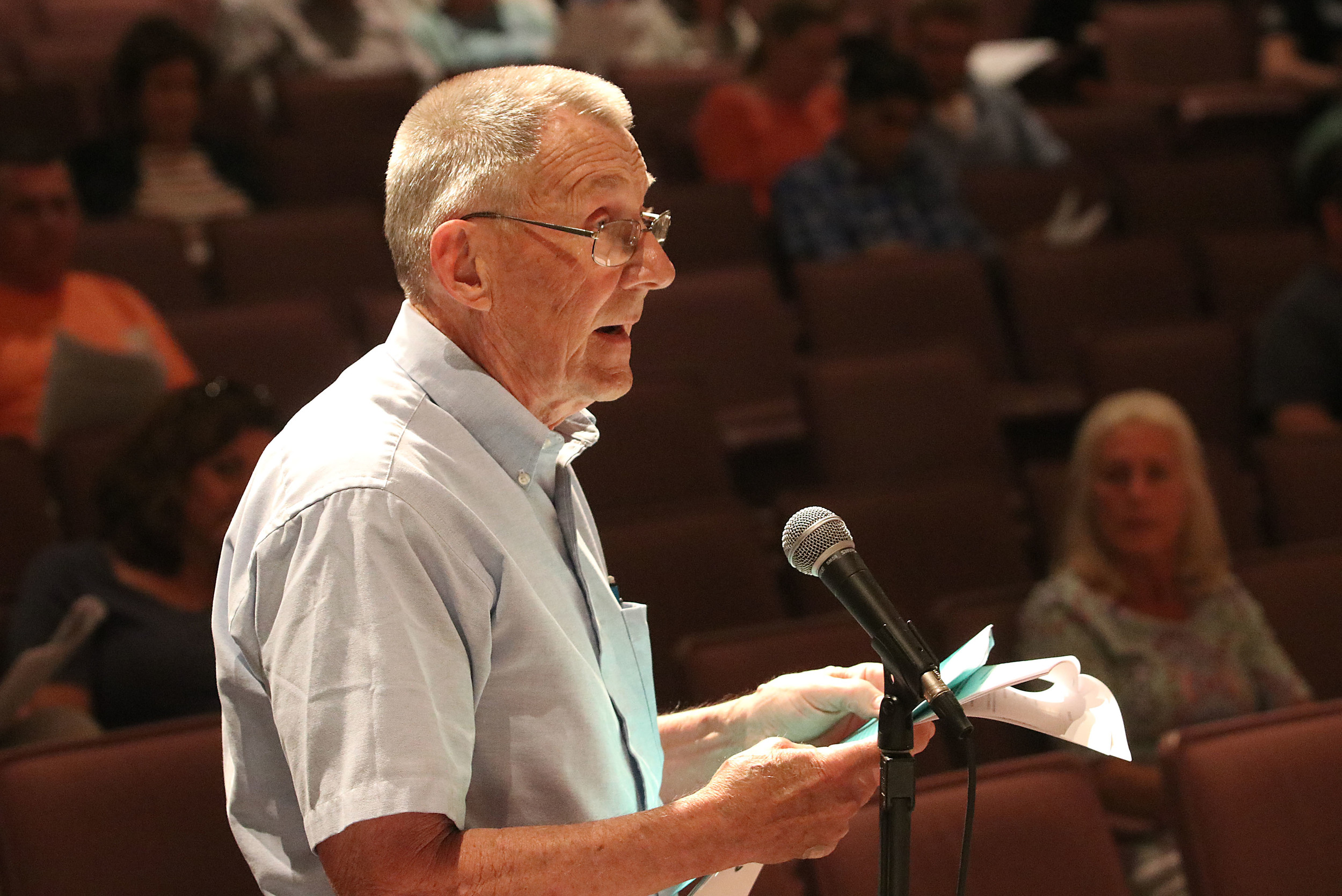 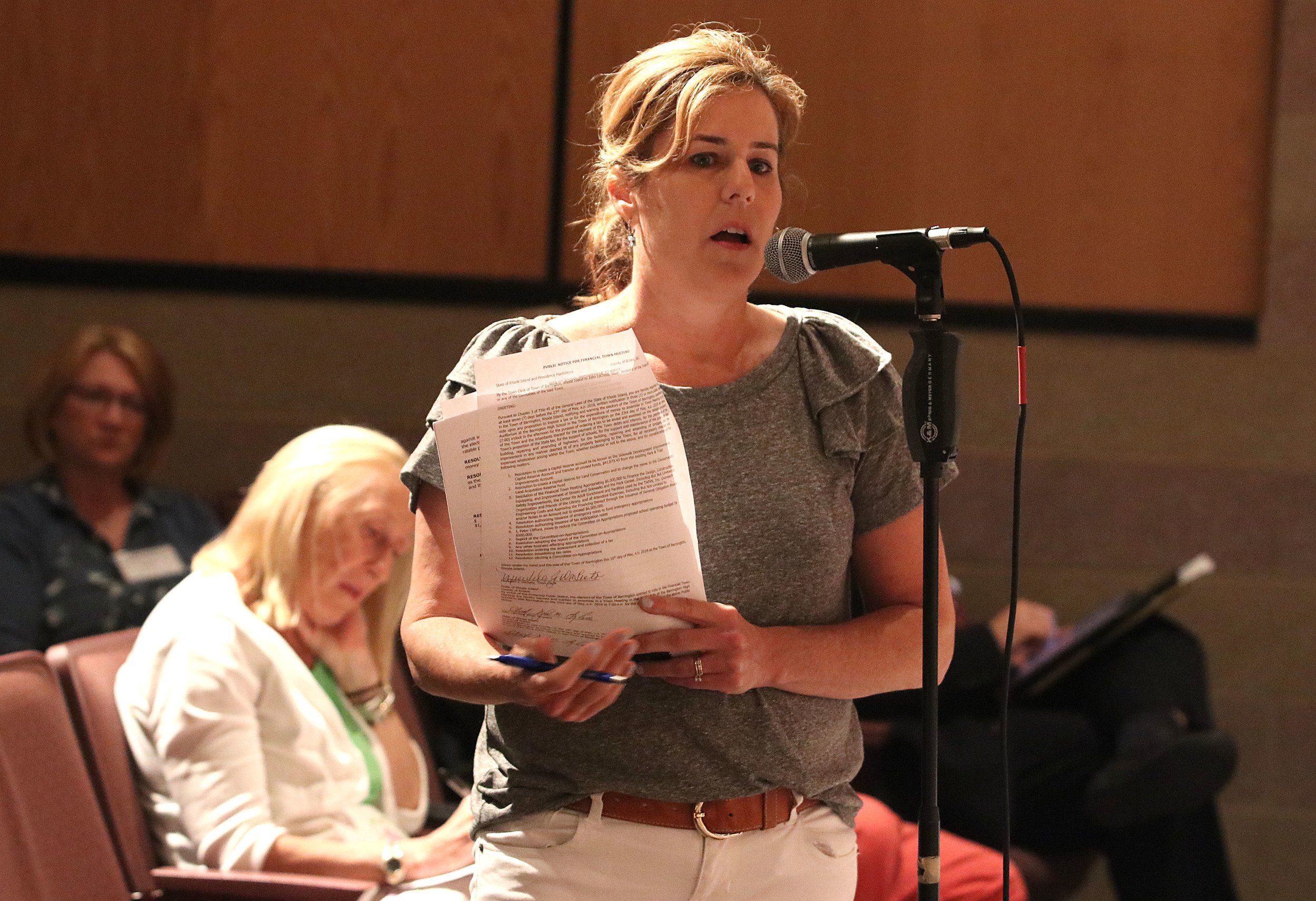 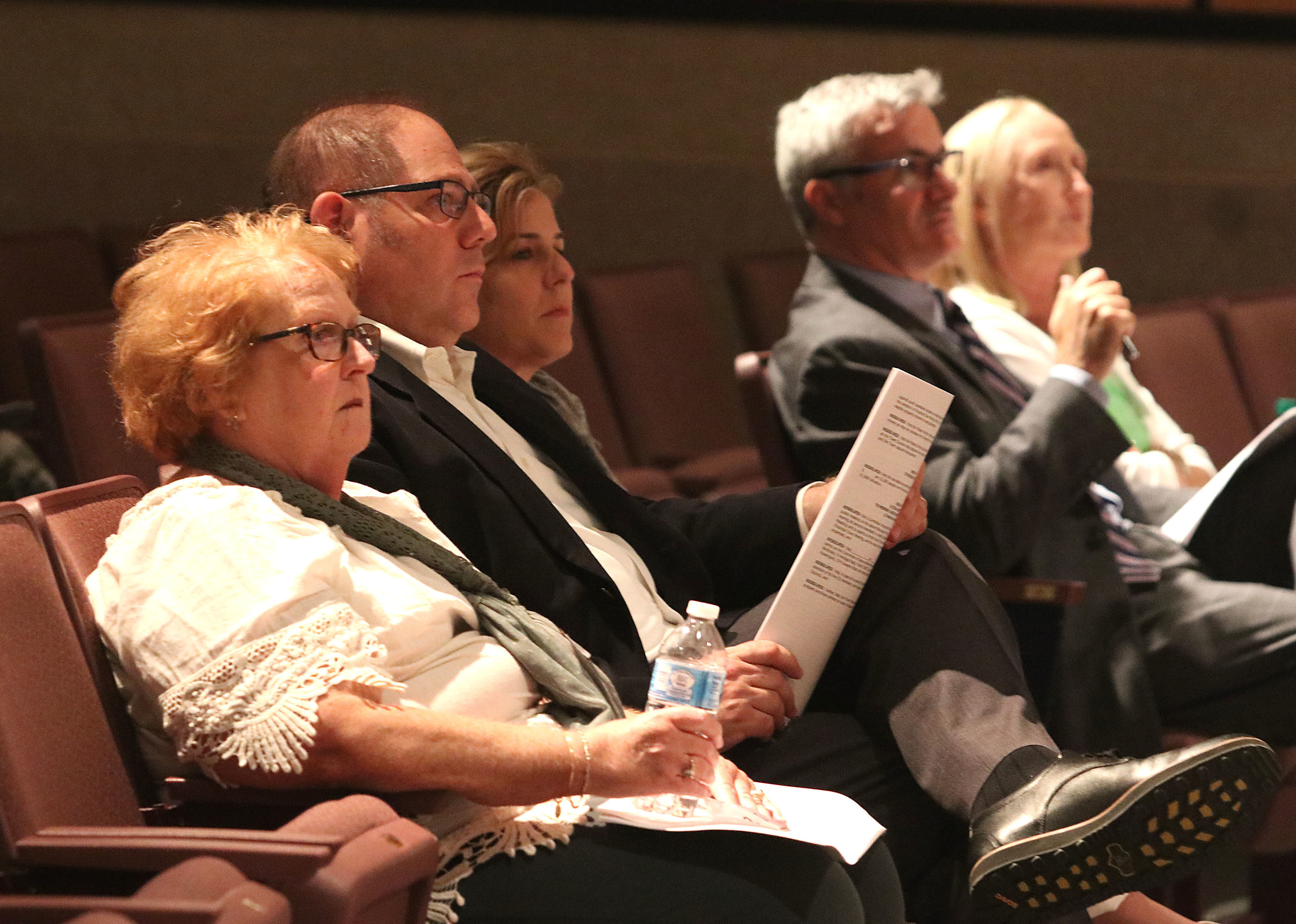 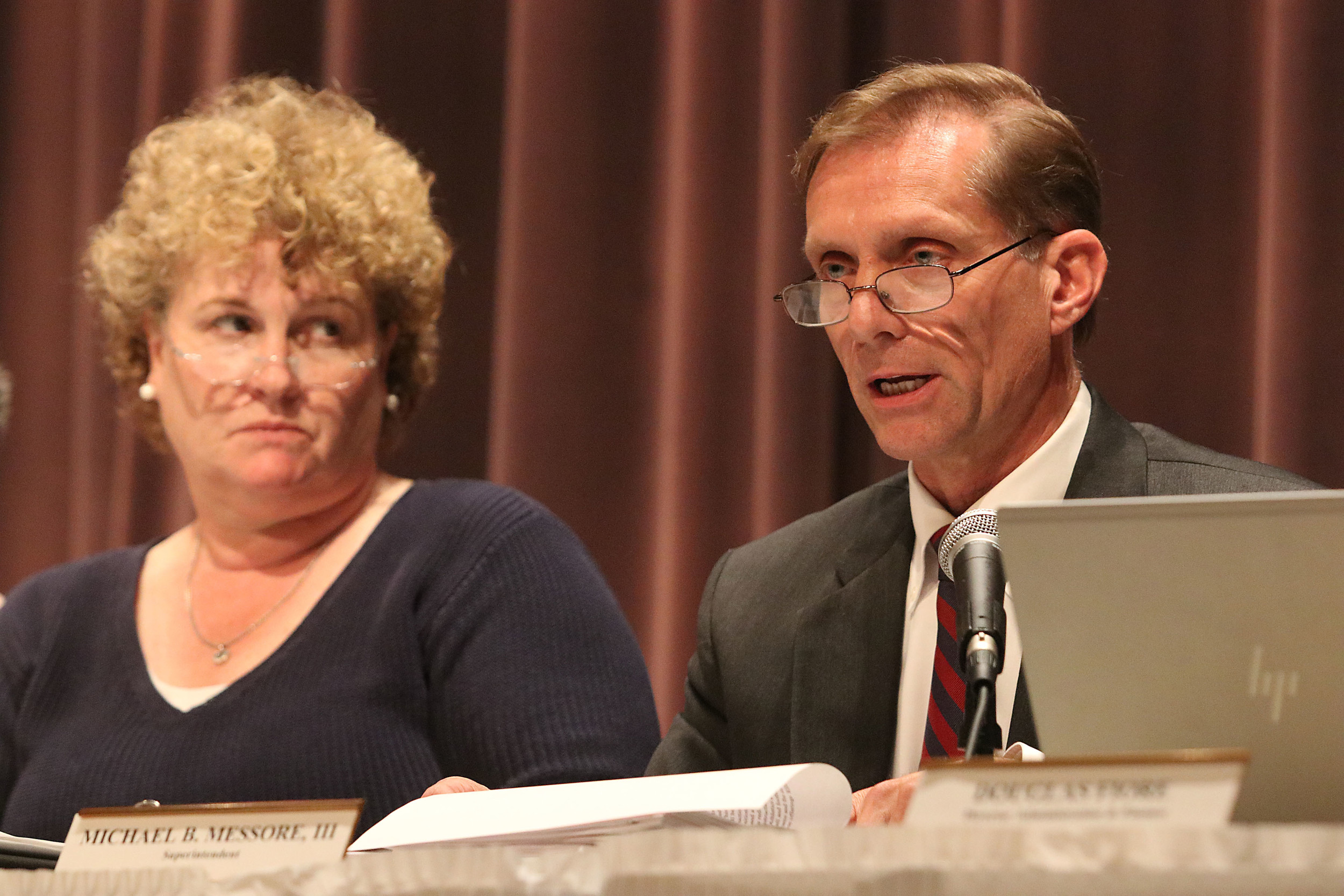 Taxpayers opened the meeting in a generous mood as they approved a $6 million bond that will pay for renovations and repairs to the Peck Center Building and new roads and sidewalks across town.

A few minutes later Barrington resident Peter Clifford offered an explanation of his motion to cut $500,000 from the budget. The amendment drew a mixed response from the hundreds of people gathered inside the high school auditorium.

Mike Tripp and Paul Dulchinos said they supported the cut.

Mr. Tripp said he has lived in Barrington for more than 40 years and has watched as the school budget has grown to more than $50 million. He spoke to school officials and challenged them on their premise that much of the budget increase is locked into contractual obligations.

"You people sign the bloody contract," he said. "It's up to you."

Mr. Dulchinos said school officials have grown accustomed to extending 2 and 3 percent raises each year to the district's employees.

"How many of us have had 3 percent raises every year over the last 10 years?" he said.

Kathy Crain and Scott Douglas spoke against the motion to cut $500,000 from the budget.

Ms. Crain said the cut represents a piecemeal dismantling of the budget. She said the school department has not added any programs, and local students are "not competing" with their counterparts in other school districts across the state. She then recommended the town begin finding new sources of revenue — "Let's tax the country club," she added.

Mr. Douglas, a member of the committee on appropriations, challenged earlier comments stating the COA rubber-stamped the proposed budgets and avoided a "deep dive" into the numbers.

He then said people should go back and read the minutes from the nearly two dozen COA meetings that were held leading up to the financial town meeting.

"Please recommend what you'd like us to do further," he said, adding that it should be the burden of taxpayers to identify what programs they would like cut if they want more budget savings.

A short time later, Ann Strong approached the microphone and said she had spent the last few hours reviewing the COA meeting minutes and was not happy with what she found. She said the appropriations committee did not take any formal votes on any of the financial details.

"I don't know how we got to this budget," she said.

Chad Mollica, a former member of the COA, spoke in favor of the cut. He said the town has a systemic problem with its budget and that "the big numbers are getting bigger." He said the trend should concern all residents, and he also challenged the school administrators for sharing an itemized list of programs and positions that would be cut should the $500,000 be eliminated.

Lisa Daft also spoke in favor of the cut. She said the committee on appropriations failed to do its job, and has allowed 4 and 3 percent increases — not including the $68.4 million middle school bond — over the last two years.

"We need to get some balance back in the budget or we're going to be in trouble," she said.

Kamika Brown, a senior at the high school, spoke against the cut. She referenced the positive impacts certain classes have made on her life. Recent BHS graduate Kate Turner shared a similar message, stating that her high school education prepared her well for college.

Richard Simms asked two questions to town officials. Mr. Simms asked Barrington Superintendent of Schools Michael Messore if it was really true that the schools have not added any new programs, as had been claimed by a prior speaker. Mr. Messore said there have, in fact, been new programs added at the schools.

"About 11 and a half percent," said Mr. Staples, adding that a large part of the increase was for the middle school bond.

Peter Orlando said he opposed the $500,000 cut. He said the Barrington school department is an institution that works. He added that economists often extoll the positive impacts of investing in education, particularly in elementary education. Mr. Orlando also said it felt like this year's FTM was a repeat of prior FTMs. He referenced German philosopher Friedrich Nietzsche's theory of eternal return, where all existence and energy has been recurring and time is limitless, so it is very likely that Barrington will continue to experience the same financial town meetings year after year. The comment drew laughs from the audience.

Eventually, recently-appointed town moderator Allan Klepper brought the $500,000 motion to a voice vote. It initially sounded like the motion was defeated, but Mr. Klepper asked for a standing vote, just to confirm.

"The motion is defeated," he said, after watching the majority of meeting attendees stand up against the cut.

"They're going to do the same thing once their kids graduate," said Mr. Dulchinos.