Oliva Middleton’s junior season at St. Lawrence University got off to a flying stop.

A junior point guard and a Barrington High School alumnus, Middleton was diagnosed with Patellofemoral … 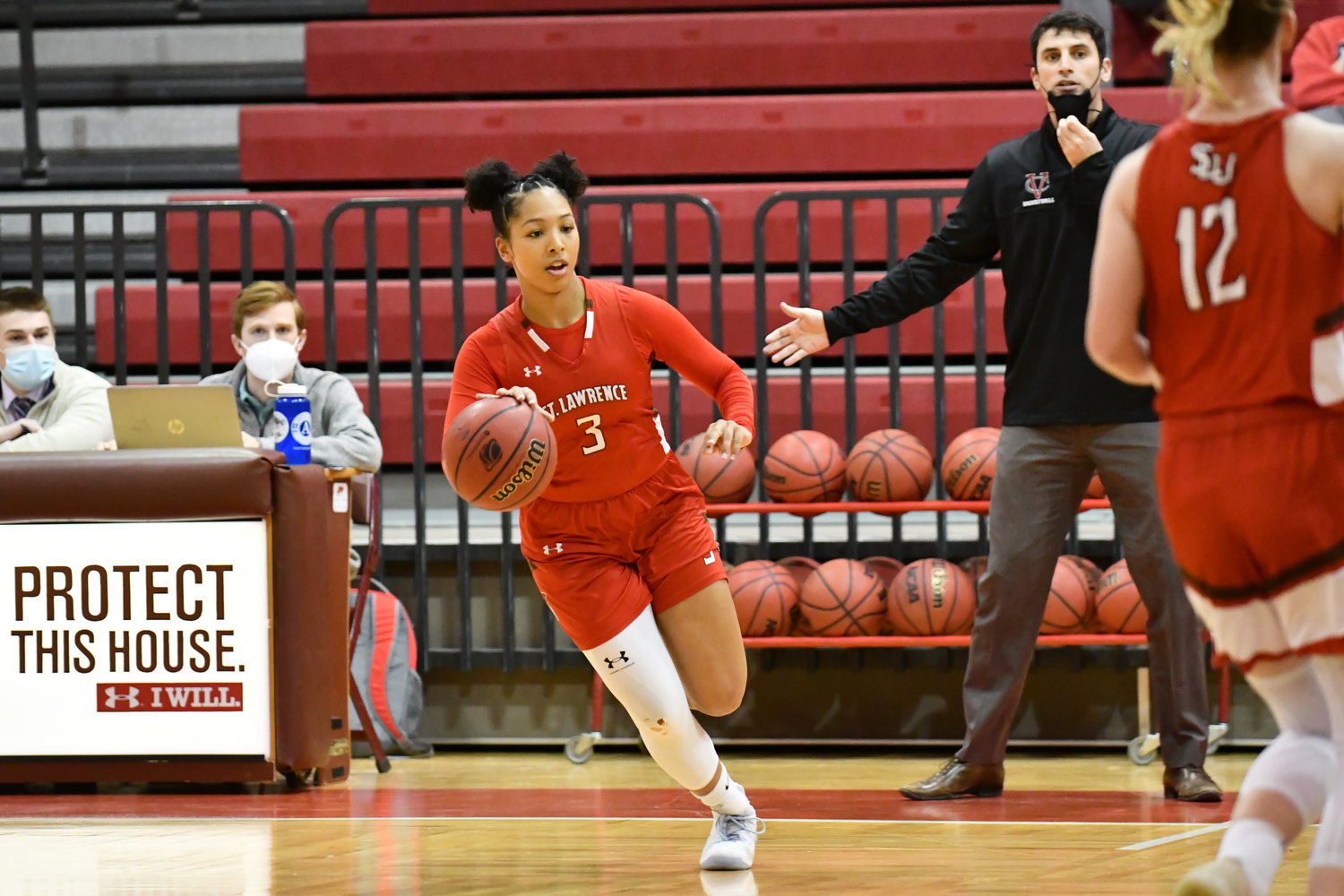 Oliva Middleton’s junior season at St. Lawrence University got off to a flying stop.

A junior point guard and a Barrington High School alumnus, Middleton was diagnosed with Patellofemoral pain syndrome (i.e. pain around a kneecap which is common for people who run and jump).

As a result, she missed the first eight games of a season during which the Saints compiled a 22-5 record (14-4 in the Liberty League).

“I was out for 12 weeks total and played my first game on December 31,” Middleton said. “I worked closely with the athletic trainers. I still have some issues with my knee that previously wasn’t the case.

“It definitely was hard to be at practice and not participate. I had to take on a new role, being supportive because some freshmen and sophomores needed help. People would come to me for questions even though I wasn’t playing.”

Once Middleton was able to step on a court, she had a commendable season as she averaged 8.7 points and 4.7 assists per game.

St. Lawrence was defeated, 70-58, by Ithaca College in the Liberty League championship game despite 15 points from Middleton.

In retrospect that paled in comparison with her sophomore season when she led the Saints in scoring (13.3 ppg.) The same was true with her freshman season when she dished out 90 assists and averaged 7.0 rebounds per game. Also as a freshman she once was voted the Liberty League Rookie of the Week.

“She started coming back around Christmas and missed our off-season conditioning program in terms of shooting the ball,” Saints coach Dan Roiger said. “Toward the end of the season she played her best ball but I know she can play better.

“Now, she has to stay healthy and work hard so she doesn’t get hurt for next season.”

Ever since Day One, Middleton has been an integral part of the Saints program. In 50 career games, she’s averaged 12.0 points and 4.3 assists per game.

“The best aspect of my game is passing,” said Middleton, who has 168 career assists. “Scoring is fun but giving an assist is probably the better part of my game.”

Arguably Middletown hasn’t missed a beat since she graduated from Barrington. Besides earning First Team All-State honors, she also earned All-Class and All-Division accolades; she scored 1,043 points; and twice played in the Rhode Island Final Four.

But basketball wasn’t her only sport at Barrington.

She was First Team All-Division in soccer and participated in the long and triple jumps.

“I was in contact with five or six schools that I was considering,” said Middleton who was named to the academic honor roll at Barrington for four years. “St. Lawrence was at the top of my list, one reason being the assistant coach (Aiden McRoberts) who was recruiting me at the time as well as (head) coach Rogier stayed in touch.

“The other schools just made phone calls and I didn’t have as much personal contact.”

At the risk of stating the obvious, what other schools lost was the Saints gain. During Middleton’s three-year tenure the Saints have compiled an impressive 46-8 overall record.

Rogier noted several reasons why he was determined to recruit Middleton.

“Number one is her athleticism,” he said. “She’s very fast and goes up and down the court and is quick horizontally. It allows her to be very good in a full-court situation to guard other people and stop them. She has basketball instincts and excellent vision.”

Those qualities make her a superb match with Olivia Barringer.

“Those two make connections where Olivia Middleton makes the pass and the other makes the catch and finishes,” Rogier said. “Olivia sometimes makes that pass to other players who aren’t expecting it.

“She can drive it and pass and is an excellent defender – probably the best defender in a one-on-one situation.”

Middleton’s versatility makes her even more valuable for the Saints.

“This past year she played more off guard than point guard,” Rogier said. “The advantage of being a point guard is the ball is in your hands. The disadvantage is once you give it up you might not get it back.

“She’s our most creative player and the goal is to get the ball in her hands where she has defenses at a disadvantage.”

What’s between her ears is another reason why Rogier wanted Middleton to be part of the SLU program.

“She has a high basketball IQ,” he said. “I think she understands the game of basketball at a deeper level. A lot of players are smart and when they watch film but when you get in games, it’s harder to be ready because you don’t know what the opponent is going to do.

“When you get in a game, some players can’t process it as fast. When opponents make unexpected moves her mind can process that information and still make the correct play.”

Middleton credits coach Lenz for having helped make her a better player.

“I think going into high school there really wasn’t anyone who could play my position and I was thrown into the fire,” she said. “That really helped my game.

“The transition from middle school to high school was tremendous. Playing with juniors and seniors and listening to coach Lenz helped make me a better basketball player.”