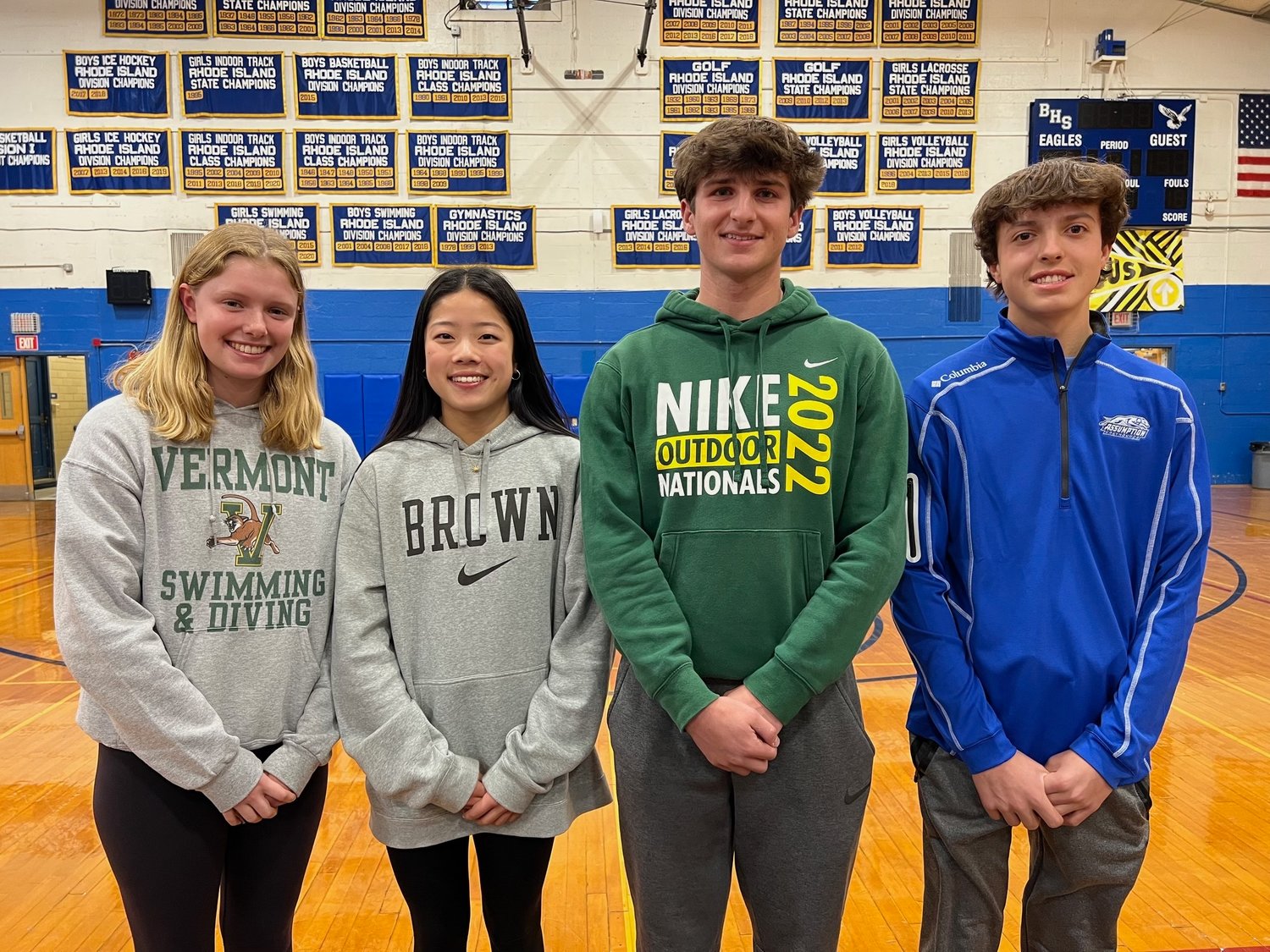 Shortly after classes dismissed for the day, Nathan Greenberg, Emily Ford, Zoe Webster and Cole Vieira met in the high school gymnasium to sign their National Letters of Intent.

All four BHS standouts will compete for their respective college sports teams: Greenberg will run track at The College of the Holy Cross; Ford will compete in gymnastics at Brown University; Webster will swim at the University of Vermont; and Vieira will play golf at Assumption University.

Emily Ford has been competing in gymnastics since she was three years old and realized early on that it was a sport she wanted to pursue in college.

“I always wanted to be a college gymnast, but I didn’t start the recruiting process until my freshman year,” Ford said.

Ford thanked her parents for their support, her high school teammates (including Shaye Robinson, Hailey Searles, and Sarah Henderson), and also praised the efforts of her private coaches at Prestige Gymnastics.

Ford said she is very excited to take her game to the next level at Brown University.

“Brown, I just loved the campus atmosphere,” Ford said. “The academics are great. The gymnastics team is great too.”

Nathan Greenberg tried a number of different sports before he discovered track.

“Last year was actually my first year (running track),” Greenberg said. “I was always pretty fast and I was doing a lot of experimenting with other sports. I did soccer freshman year. I tried some football but didn’t really like it. But I’ve always had the speed so I went out to do track and made a lot of progress really quickly.”

Running the sprint events, Greenberg showed great ability and then put his mind to improving.

“It’s a lot of work,” he said. “I usually did two days where I sprinted, then two to three days where I did my strength training. Those kind of go hand-in-hand with the progress. And I always cherish my recovery too. It’s a really important part. Just sticking to that, building it as a habit. Just never giving up on it, led to the success.”

“I think the day in the spring that I qualified for nationals, that was when I was like, ‘Yeah, I can go a lot further,’” he said. “Before that I was just trying to improve without the idea I’d be getting this far. Right when I hit that landmark that really got me going.”

A number of schools began recruiting Greenberg, who has clocked a 10.9 in the 100-meter race.

“Lafayette and URI were interested. I guess Holy Cross just showed the most interest, and they were the first school that showed interest, so I just stayed loyal,” he said.

Greenberg said he is excited to take his talents to the next level at Holy Cross.

The BHS senior wanted to thank all the people who have helped him along the way.

“Coaches, teammates, friends, family. Anyone who motivated me. Even the random people I met on the track that complimented me. All those little things just went into it, and I really appreciate it.”

Zoe Webster loves the mountains. And she loves the outdoors, so it seems suitable that the BHS senior will take her swimming talents to the University of Vermont next year.

“I loved UVM, ever since I stepped on the campus,” Webster said.

Webster started swimming when she was seven or eight years-old and took quickly to the sport.

“I know that my mom was a swimmer growing up, so I knew she wanted me in the water. I’ve loved it ever since,” she said.

Webster competes mostly in the 50- and 100-freestyle events, and started gaining attention for her fast times during her sophomore and junior years.

“It’s really prepared me, especially the swim team and having Sandy as a coach. It’s been such an amazing experience and I’m so ready to have it all again,” Webster said, referring to the upcoming swim season. “I think it’s definitely competitive (within the team). We’re always pushing each other at practice and Sandy runs very hard practices…”

Webster wanted to thank her family for their support over the years, her teammates, and her coaches from the Bayside YMCA swim team, Ray and Jen Baker.

Webster said she is interested in studying environmental science at UVM.

“It was fun. I progressed and started loving it. And I started putting a lot of hours in. It got more competitive. I started traveling all over the place,” he said.

Vieira logged lots of time on the course and at the range, improving his skills.

“It was not like I picked it up and started playing great right away,” Vieira said. “It’s a hard sport. It took time. Over time you started seeing good progression. From there it built up…”

Eventually, Vieira began contemplating bringing his golf game to the college level. About two years ago, he began reaching out to college coaches.

Vieira said he selected Assumption University because he likes the coach and the program there.

“The team’s great. It’s the best fit for my family and me next year,” he said.

Vieira said he was very happy to have his family attend the letter-signing event at the high school recently.

“It’s been a long time coming, so it’s really special for my family and I to share this moment today,” he said.