Wild, 11-goal game is won by unbeaten and top-seeded Chariho

Wild, 11-goal game is won by unbeaten and top-seeded Chariho 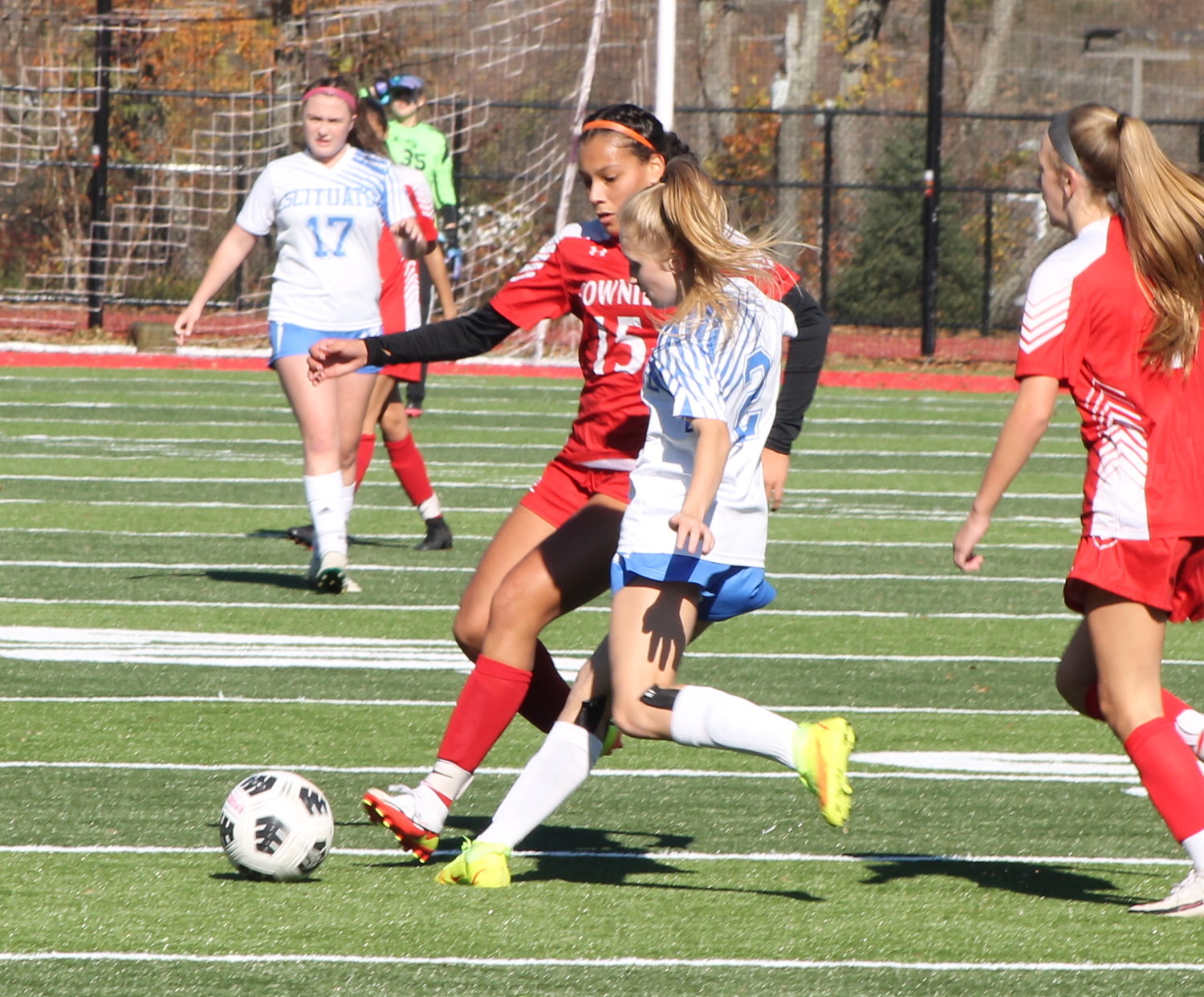 Chariho improved to 18-0-1 in league play and advanced to the D-II title game Saturday, Nov. 13, at Cranston Stadium opposite third-seeded Prout, which edged second-seeded Moses Brown, 1-0, in Wednesday’s other semi.

For East Providence, its 2021 season came to a close with a 12-4-2 overall record in D-II games, including a 3-2 win over Scituate two weeks ago in the playoff quarters. Two of the Townies’ four losses came to Chariho, which beat E.P., 3-1, in the teams’ regular season meeting earlier in the fall.

“Chariho is well coached. They have exceptional players, real good soccer players and they knew how to take advantage of the moment,” EPHS head coach Angelo Pizzi said of the Chargers’ performance in the semis.

Last week, things started promising for the locals. The Townies scored just two minutes into the contest as Jordyn Brogan delivered a cross from the right side into the middle where Olivia Williams settled, then ripped a shot past Chariho keeper Reid DosSantos to put E.P. up early 1-0.

The sequence foreshadowed some rather questionable decision making on the part of both teams’ goalies. DosSantos strayed well off her line near the edge of the 18-yard box and was unable to get fully back into position by the time Williams laced her shot on net.

Following a similar theme, Chariho found the equalizer just a minute later. E.P. keeper Kaylee Davenport failed to react at all on a seemingly innocuous shot from the edge of 18-yard box, which beat her inside the near post to the goalie’s right.

The teams traded possession for the next several minutes before the Townies went back up on top in the 14th. Briana Lopes, whose superb long-ball skills were on display all evening, took a corner for E.P., curling it directly in at the back post to put E.P. back out in front 2-1.

“The girls came ready to play. They were excited, committed to the game plan,” Pizzi said of his side in the early going of the night. “They were upbeat on the bus ride down there. They had a really impressive warm-up. They took the field and there was a lot of emotion. And after that first goal there was a lot of excitement. It showed them they could compete with this team (Chariho), an undefeated team, and we did.”

Chariho later answered with two goals in the span of four minutes to take its first lead of the night. The Chargers tied it off a scramble deep inside the E.P. 18 in the 24th then went ahead, 3-2, in 28th after a forward won a long clear just inside the E.P. half then easily chipped a shot over an onrushing Davenport, who came some 30 yards off her line to try to play the ball.

DosSantos eventually brought the rough first 40 minutes for the keepers to an end with another poor decision. She attempted to handle a long ball from the Townies that was clearly going wide of the Chariho net as time was expiring. Instead, she fumbled it out of bounds leading to an E.P. corner. Lopes’ attempt drew a handball foul on the Chargers. Brogan then drilled the penalty to even the score at three at intermission.

Chariho wasted little time out the break to take control of the game. The Chargers scored in the 47th and 49th minutes, both by Bella Pezzullo, against E.P. backup keeper Kloey Iacavone, the first a hard shot from just inside the 18 and the other off a long direct kick from 35 yards out.

“On the fourth goal we were out of position. We didn’t handle the responsibility of shepherding the ball properly. The one after that, it was just a long shot from distance we didn’t play well,” Pizzi said of the Chariho attack, especially in the second half. “They’re good on the turn, they shot it like 20 times, they ripped everything they could on frame.”

With Davenport back into the game, Chariho made it 6-3 in the 56th minute off a long free kick, a settle and shot. The Townies got one back on Lopes’ second of the night, like the Chargers’ fifth, coming directly off a free kick from some 40 yards away on the left half. Chariho later iced the contest in the 77th minute with a break-away goal as E.P. was pressing up the field looking to create offense.

“I’m so proud of our kids. They left it all on the field. They played exceptional well,” Pizzi added. “I want to especially recognize our seniors and four-year players who had great careers. They went to two semifinals and one final (a 3-2 overall loss to East Greenwich in 2020). That’s quite a run. That doesn’t happen all that often. They represented their school, the community and idea of 'Townie Pride' very well.”