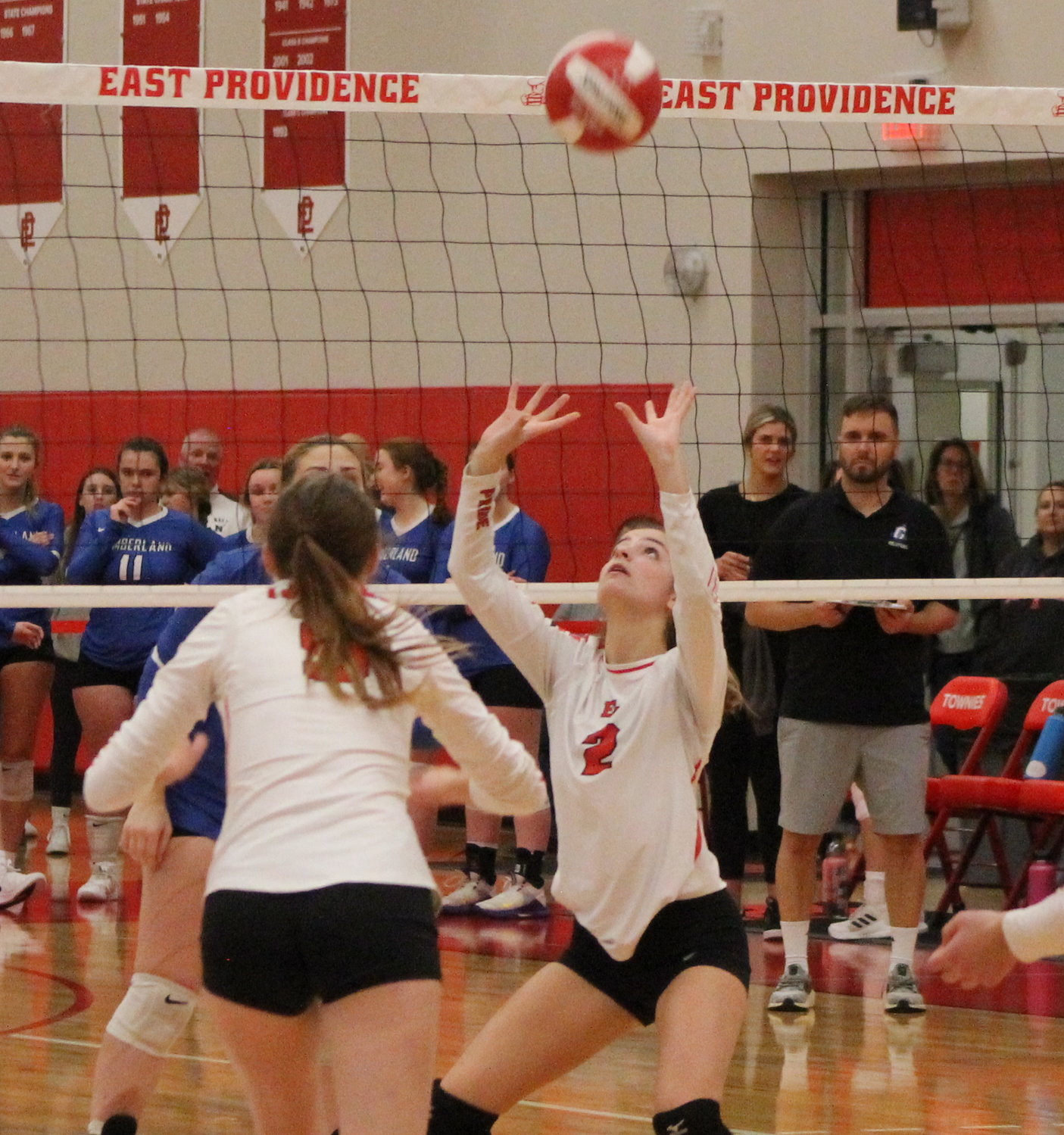 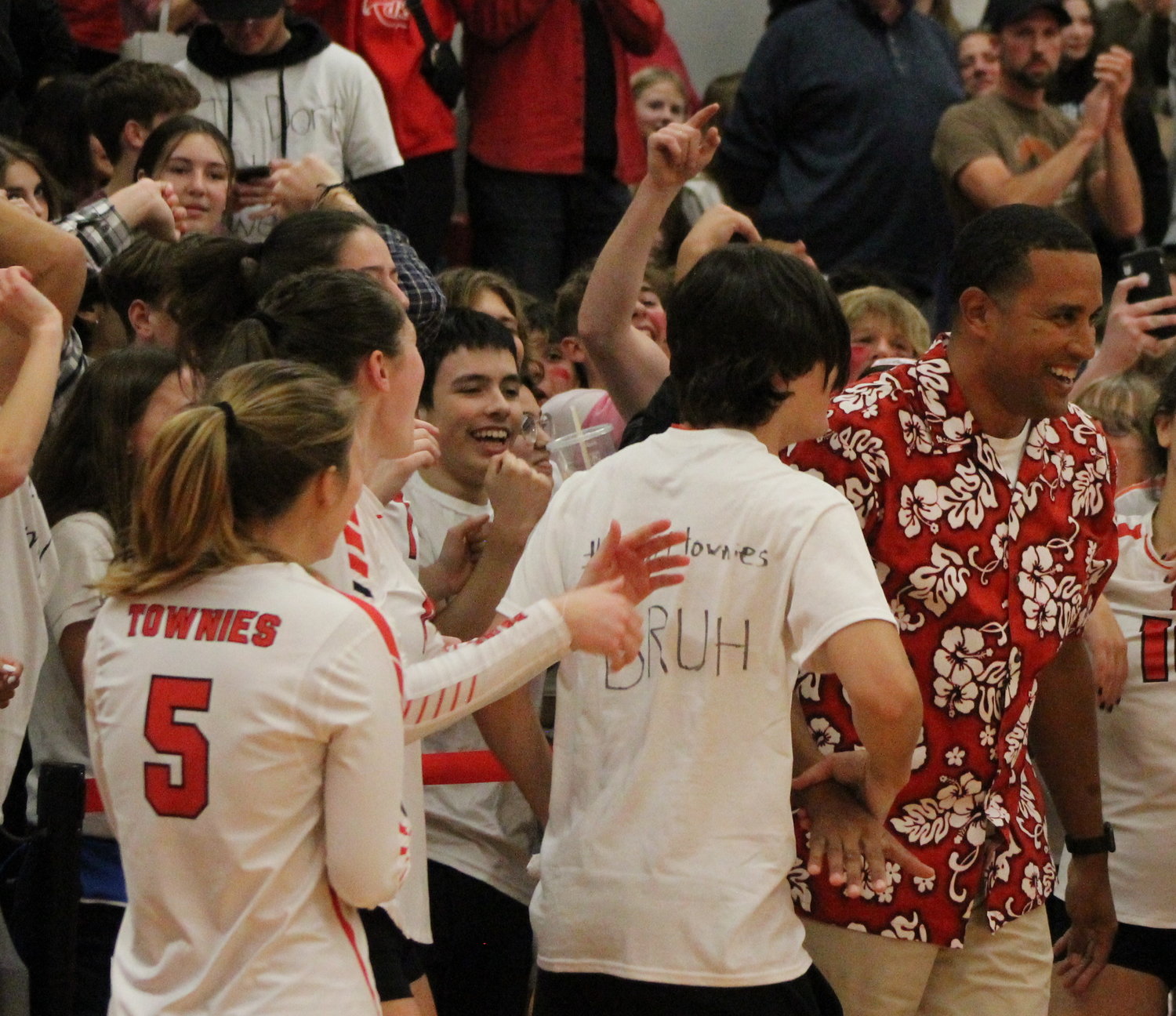 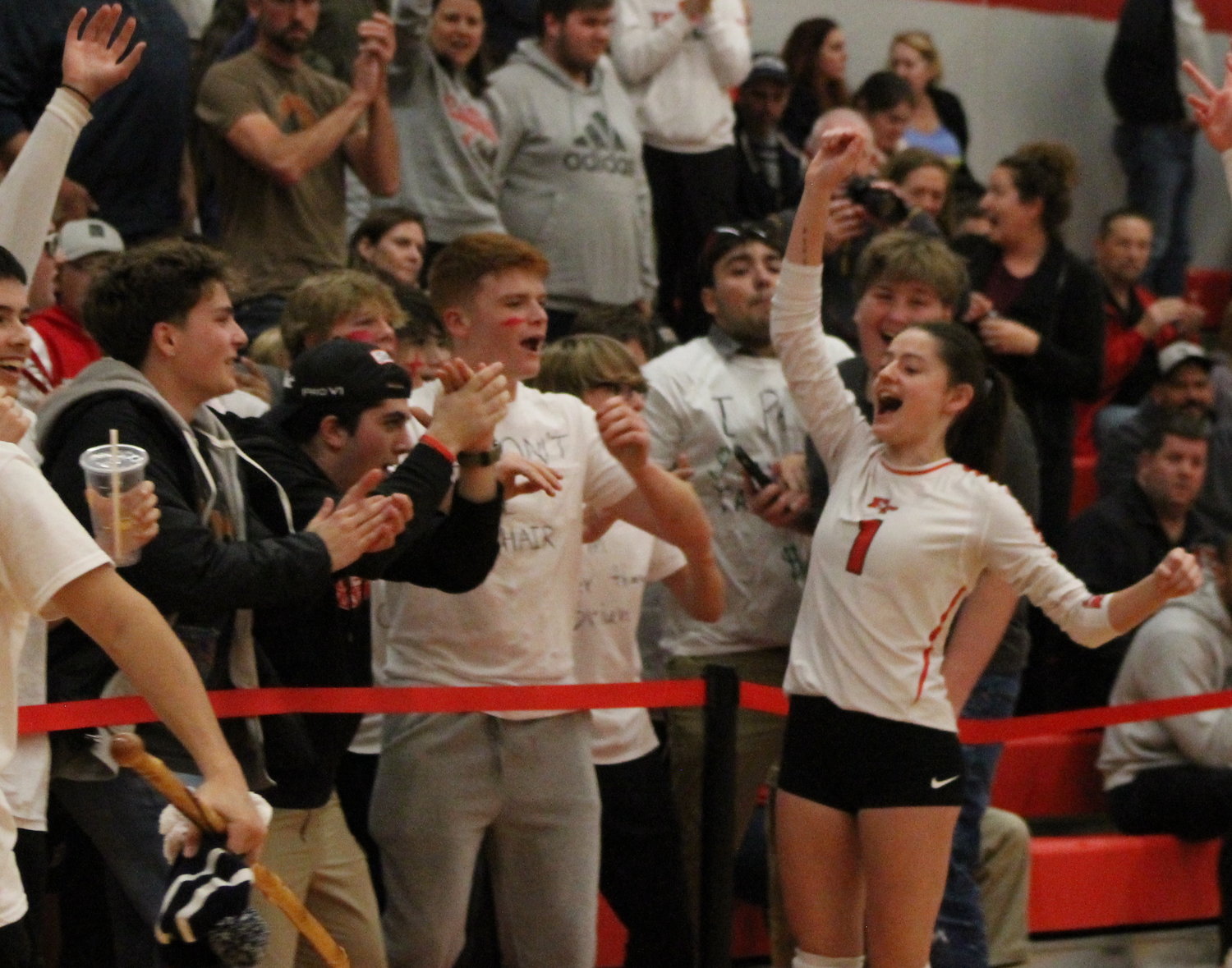 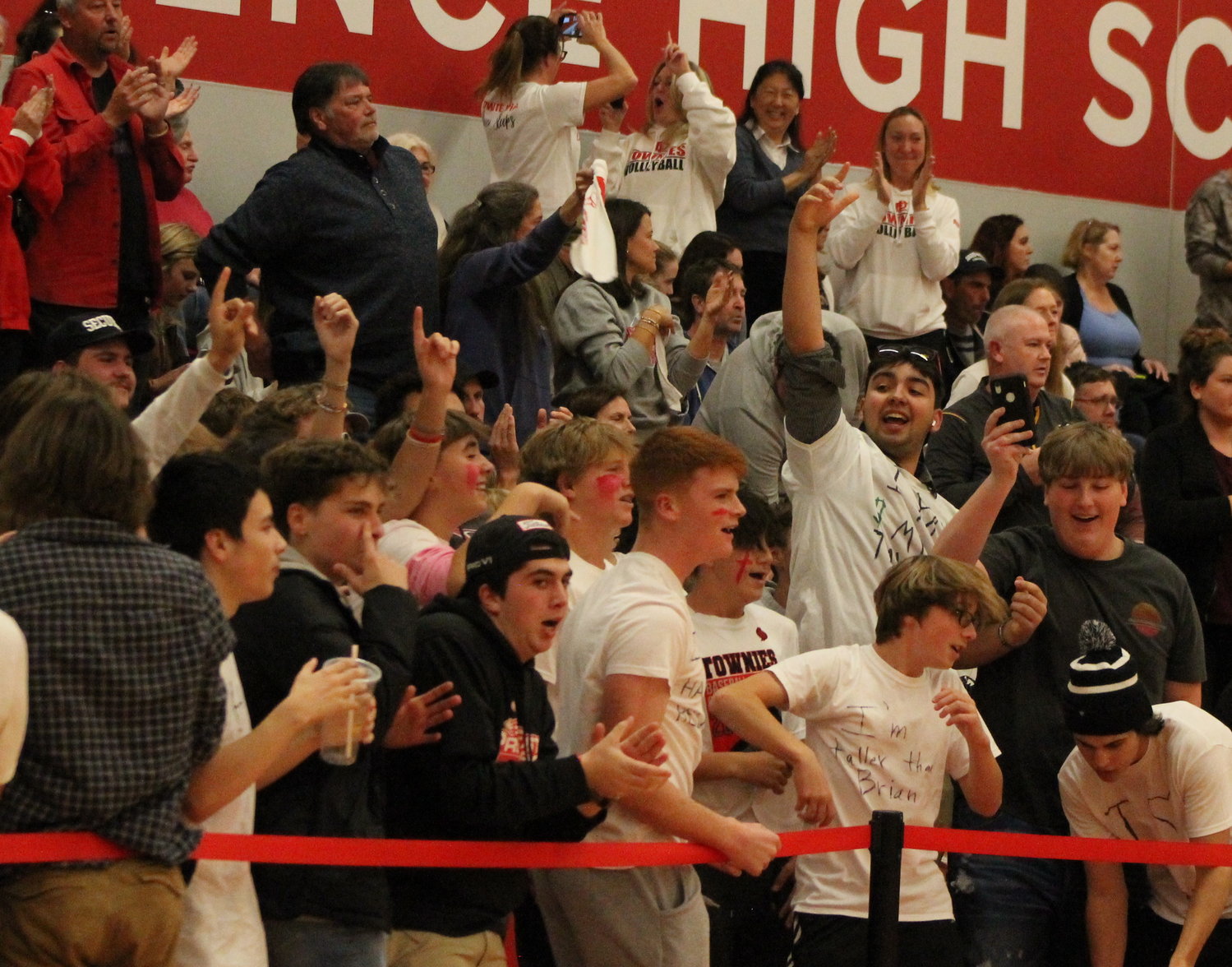 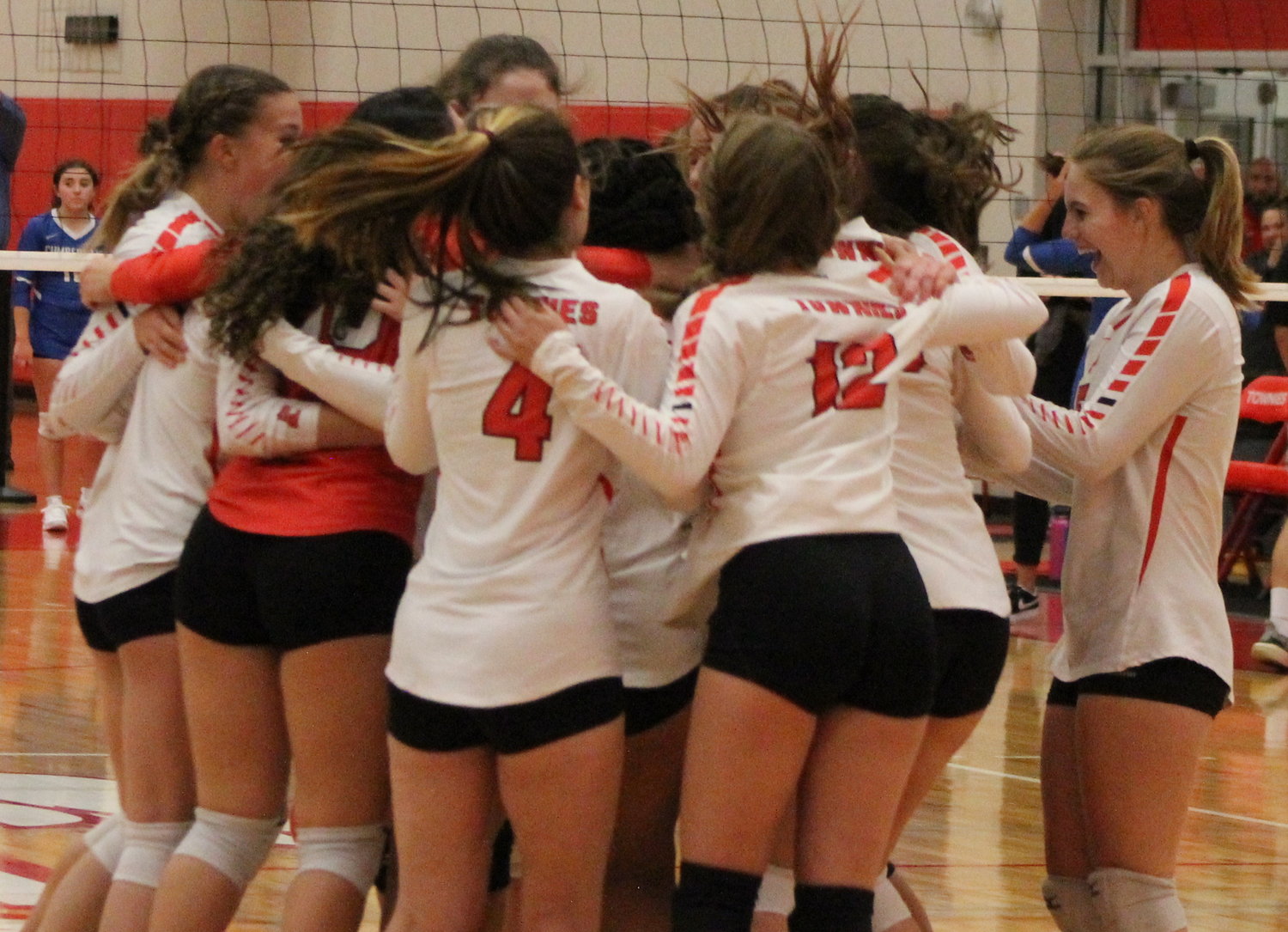 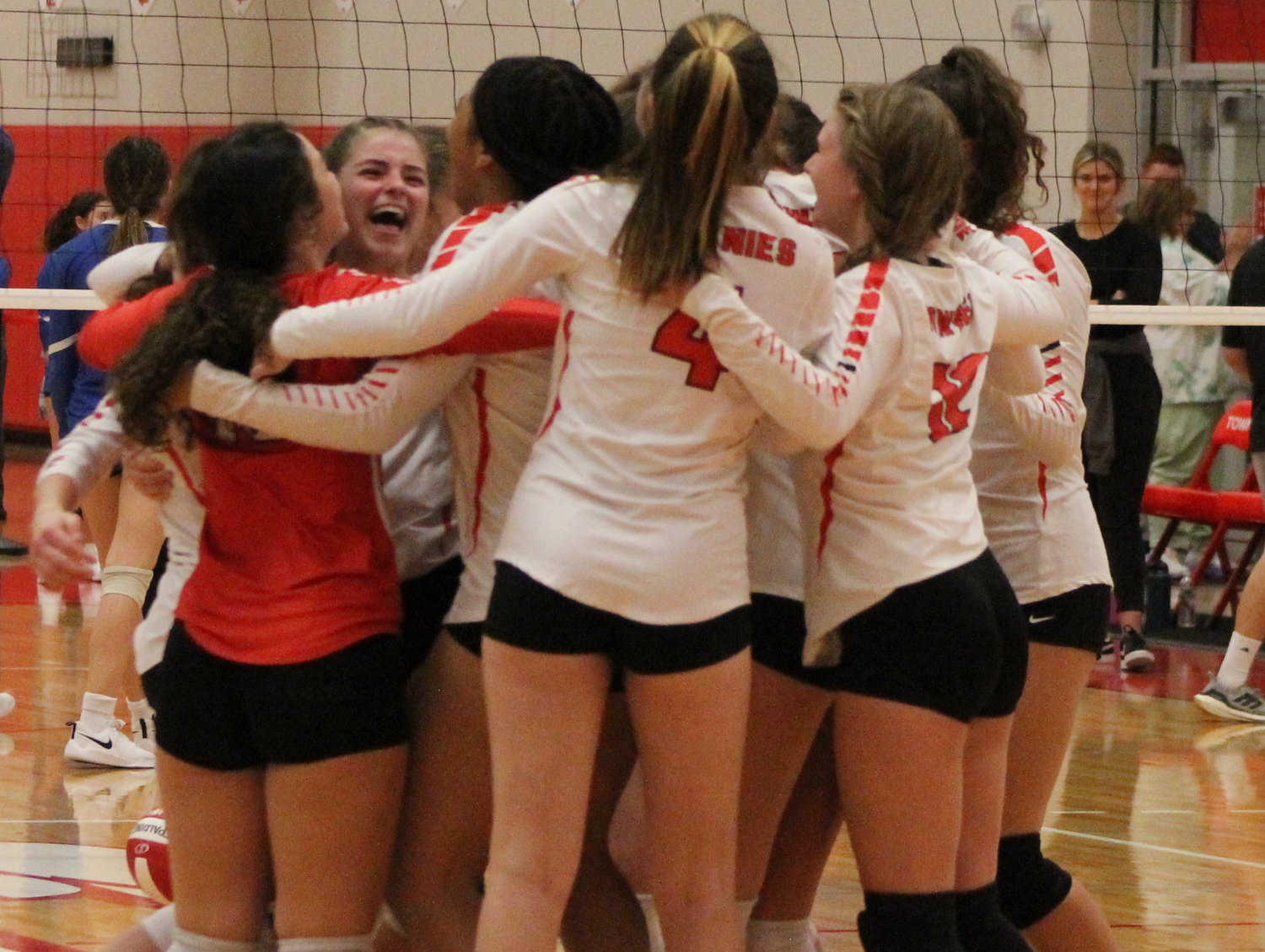 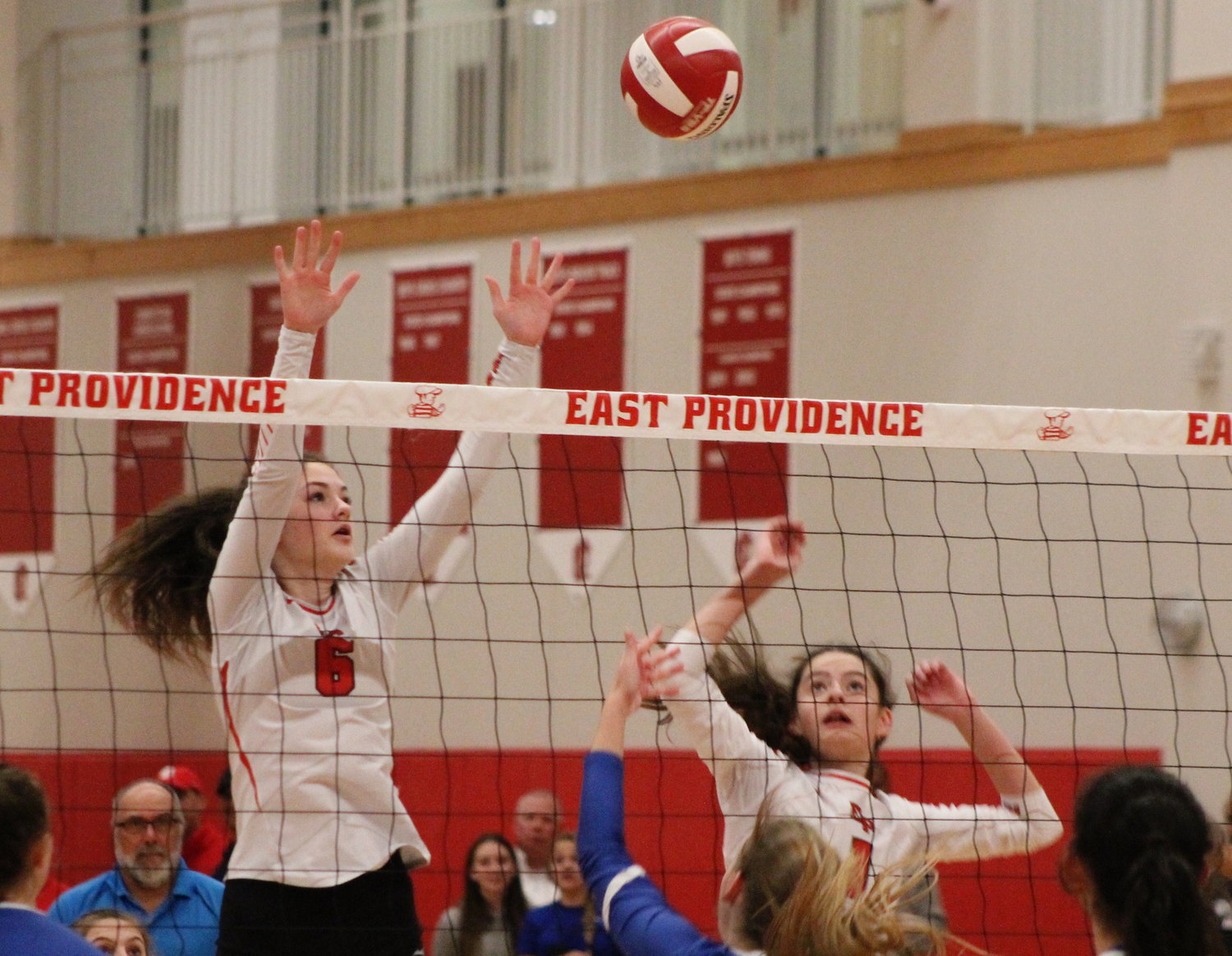 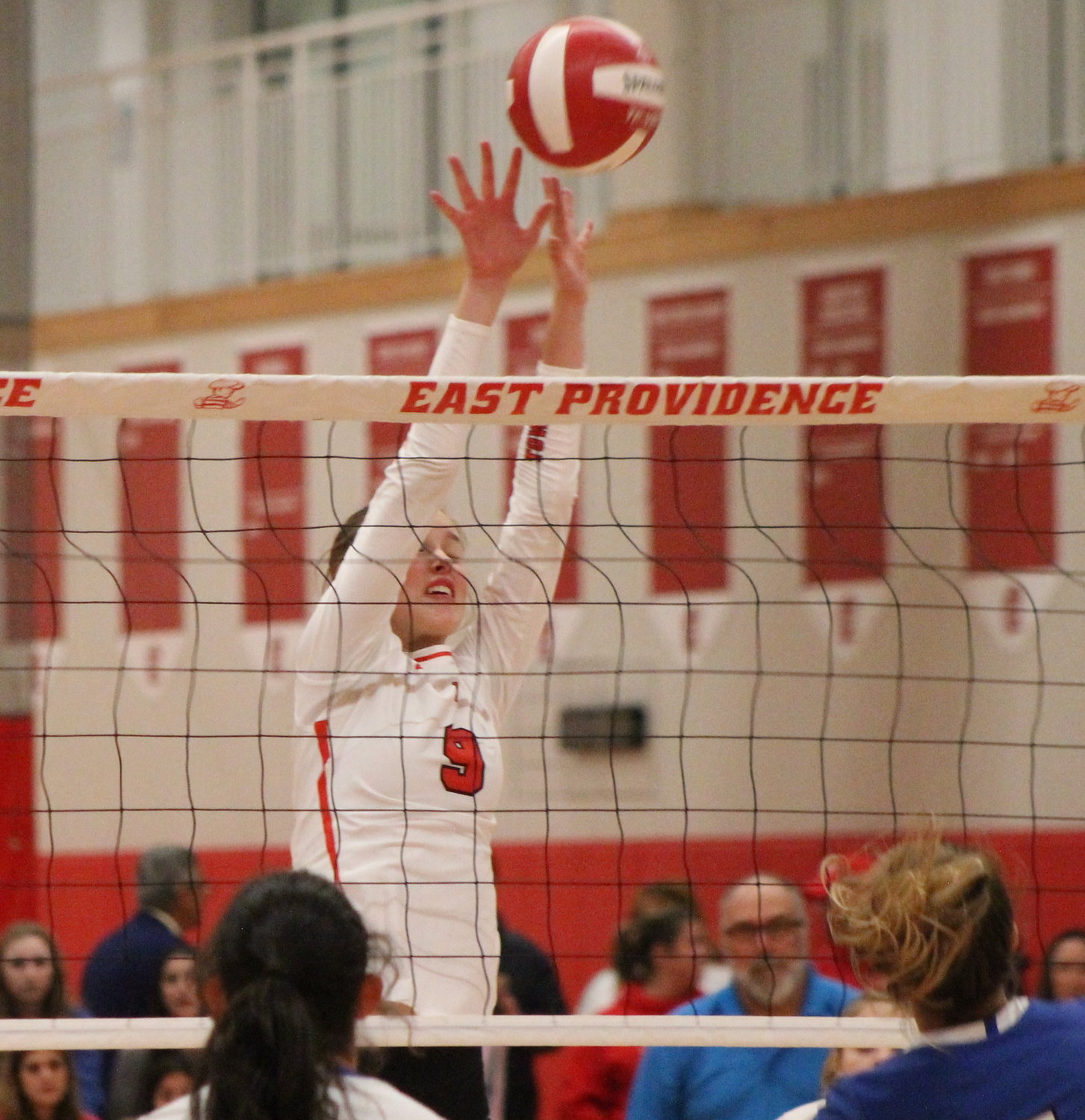 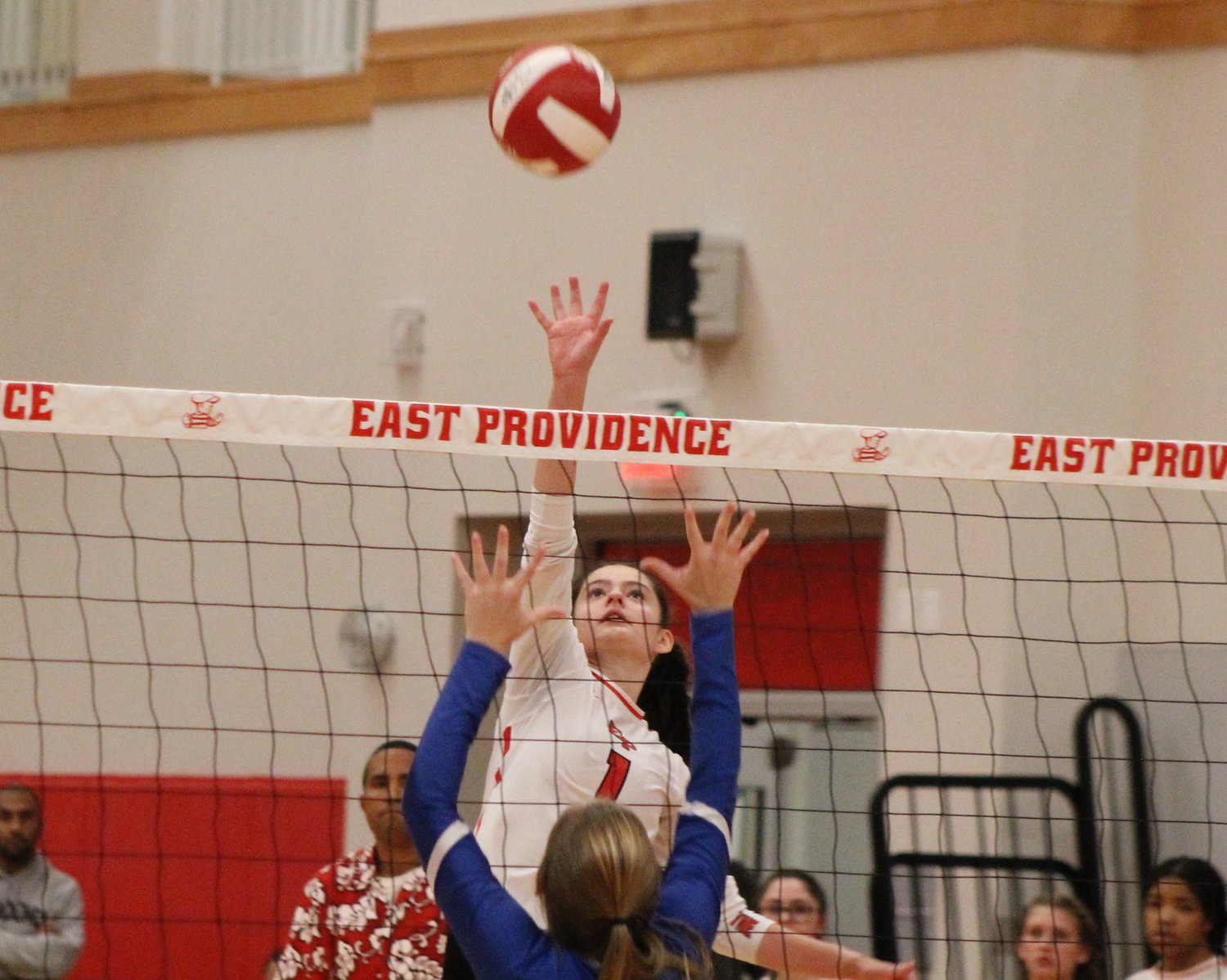 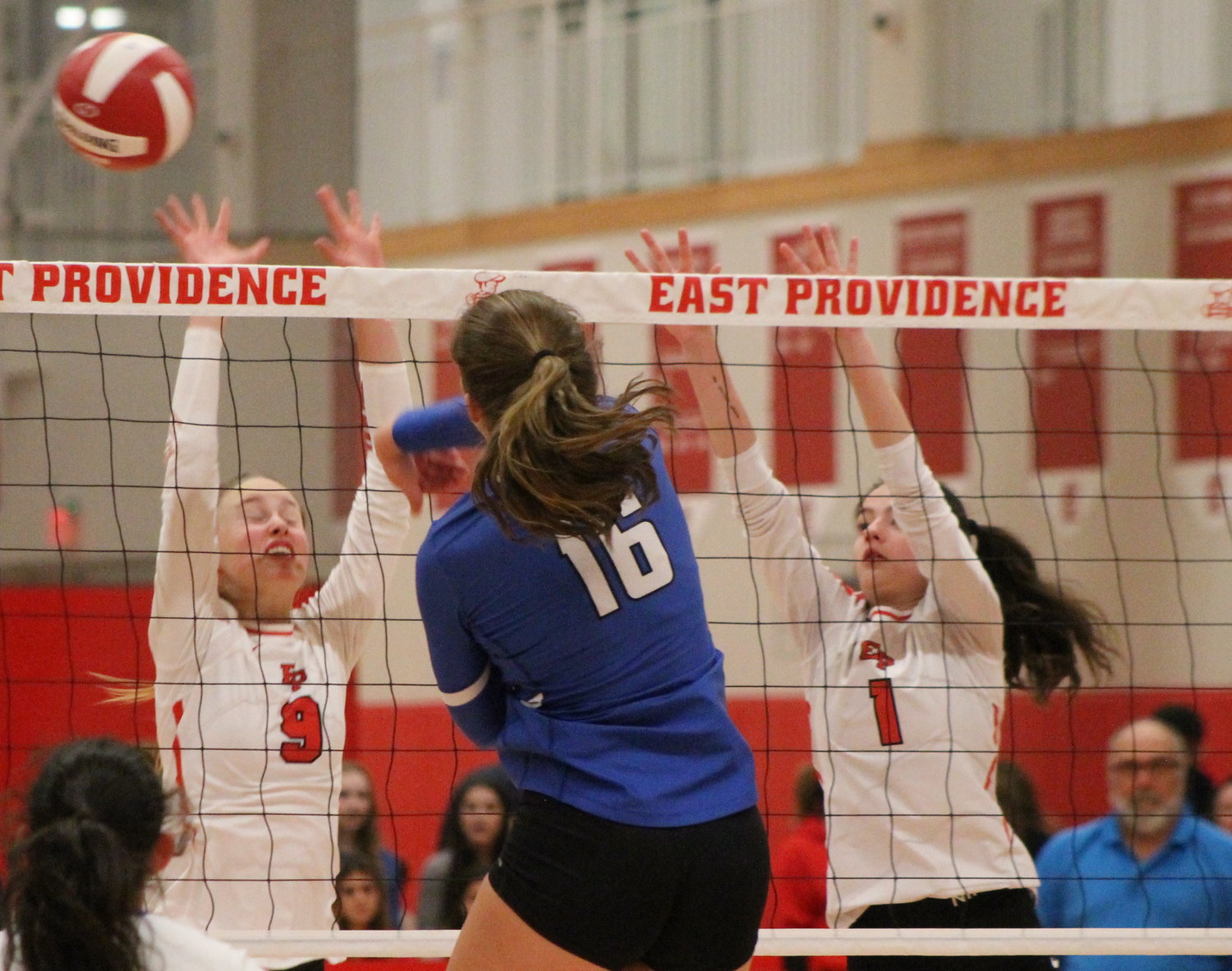 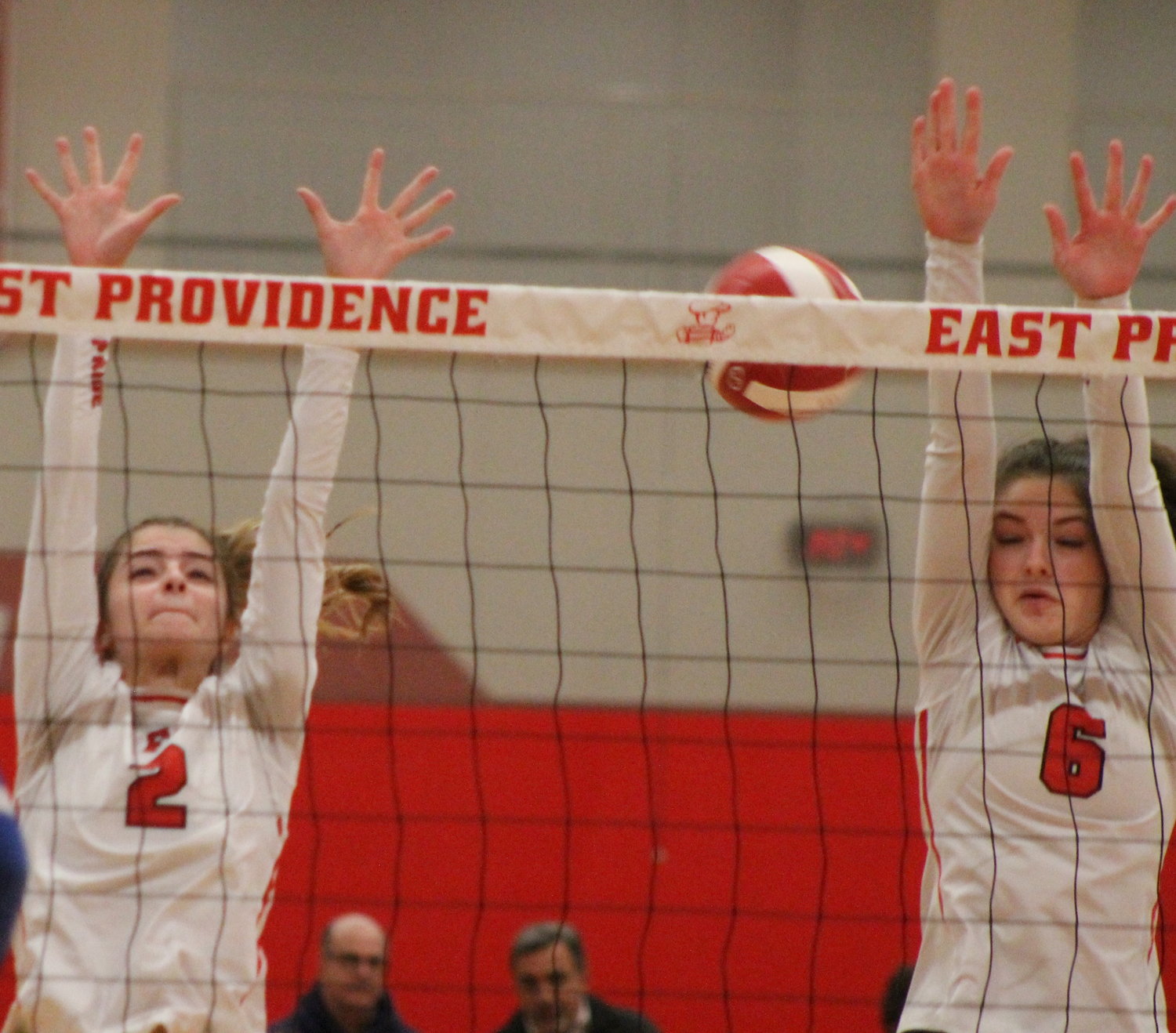 The second-seeded Townies avenged one of their only two regular season losses en route to the 3-0 victory over the visiting and third-seeded Clippers by the scores of 25-17, 26-24 and 25-22.

“The girls have really prepared. They’ve really focused in and listened to what we’ve asked them to do,” EPHS head coach Alex Butler said of his team’s performance against Cumberland.

“It’s not that they didn’t do that before, it’s just that they’ve gone to a different level of consistency to do it point in and point out,” Butler continued. “You can see it. You saw it at the start of the second game. We started off really rocky, but we fought back. There was a different look in our eyes as compared to what you saw on the other side of the net.”

“It was absolutely amazing, exhilarating,” Feola said of the Townies’ semifinal win. “We finished it out. We swept them. And we’re on to the finals.”

East Providence heads to Rhode Island College Saturday afternoon, Nov. 12, where the Townies will face either top-seeded and unbeaten Chariho or fourth-seeded Middletown at 4 p.m. The Chargers, who are the only other team to be the locals, host the Islanders Thursday night, Nov. 10.

“All that work…it all comes back to all that work they’ve done each day throughout the year. And now we get to play the last day of the season,” Butler said of the  championship match. “Chariho is great, great defensively. They keep everything up. Middletown is a young team with some explosive players. Either team I’ll be happy to go on the court and play.”

In the semis, the Townies were pretty much in command throughout the Game 1, winning by the rather comfortable eight-point margin.

Game 2 was quite different. The Clippers spurted to a 6-1 lead and were first to double figures. Cumberland eventually held a 16-9 advantage before East Providence began to rally. The Townies would cut their deficit to 20-19, but the visitors pull back out in front again, eventually reaching game point, 24-20, on an E.P. serving error. That miscue, though, would prove to be the last at the line for the Townies pretty much the rest of the way.

East Providence got the serve back on a Cumberland passing errors at 24-21. Escudero then caught fire, serving for three of her aces over the next five points. The Clippers added hitting and passes errors in the run as the Townies reached game point to take a commanding 2-0 set lead. They did, in fact, take the second game when Feola ended it with a kill off a Cumberland block attempt.

“More so than anything I thought the difference tonight was serving and passing. I told them the first touch is the most important whether it’s the serve or it’s the pass. And I thought (Cumberland) really struggled with their passing game,” Butler said.

Game 3 was also relatively tight. The score remained tied through 8-all then the Townies began to pull away. E.P.’s lead later reached 20-15 on an Emma Nordquist kill. She then served for the next point and the Clippers committed a passing error to make it 22-15.

The guests had one last run in them, getting back to within a point (22-21) following a series of unforced miscues of all types by the Townies. A dink kill by Kate Bernhardt stemmed the tide a bit for EPHS, which would close out the game and the match by winning three of the next four points. A Cumberland passing error accounted for the final point of the night.

The Townies saw their record improve to 16-2 overall in league outings, including a 3-0 sweep of Mt. Hope in the quarterfinals the week prior.

For Cumberland, the Clippers season came to a close with a 14-4 overall mark.

‘Death with Dignity’ being considered in Rhode Island