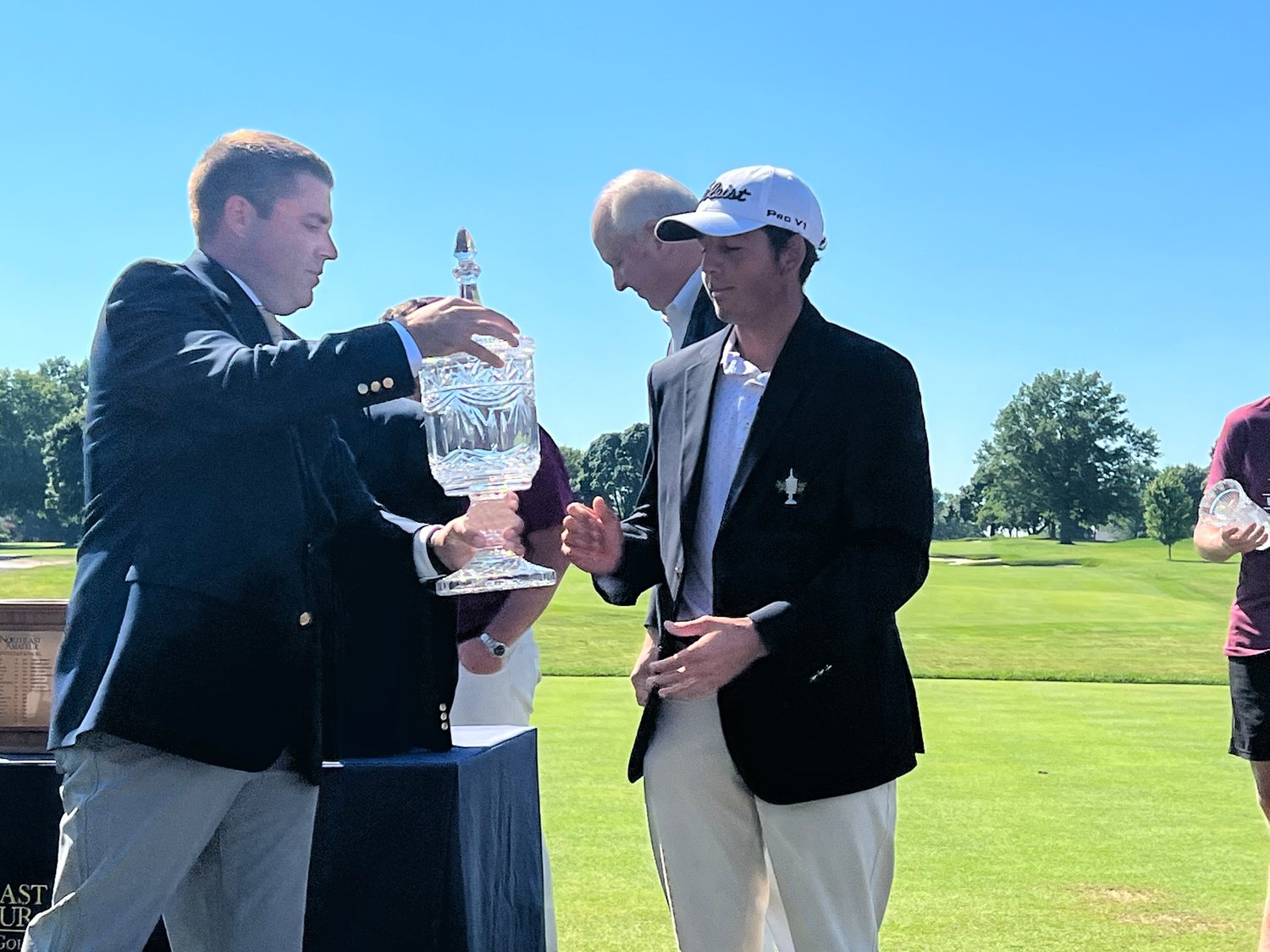 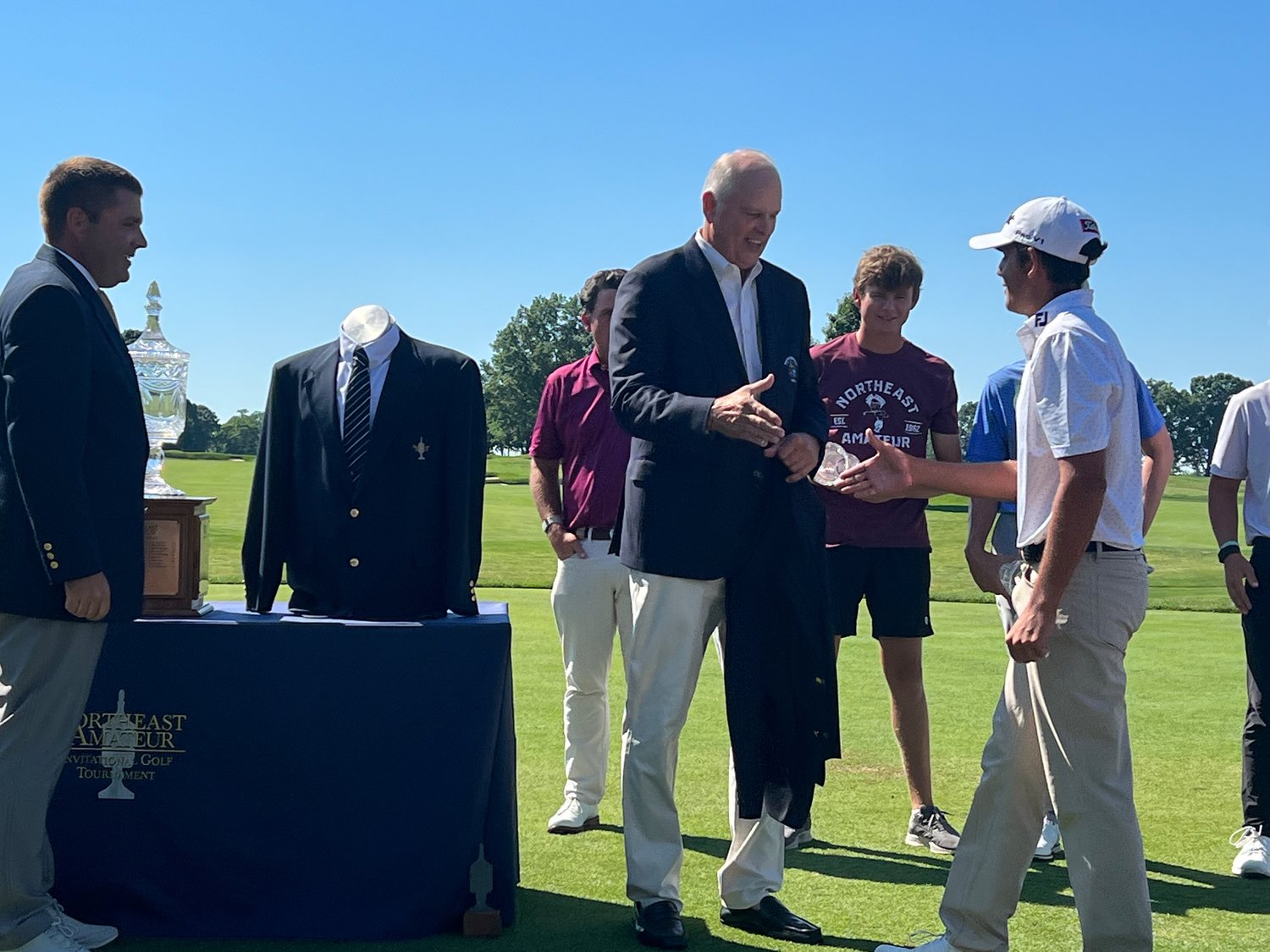 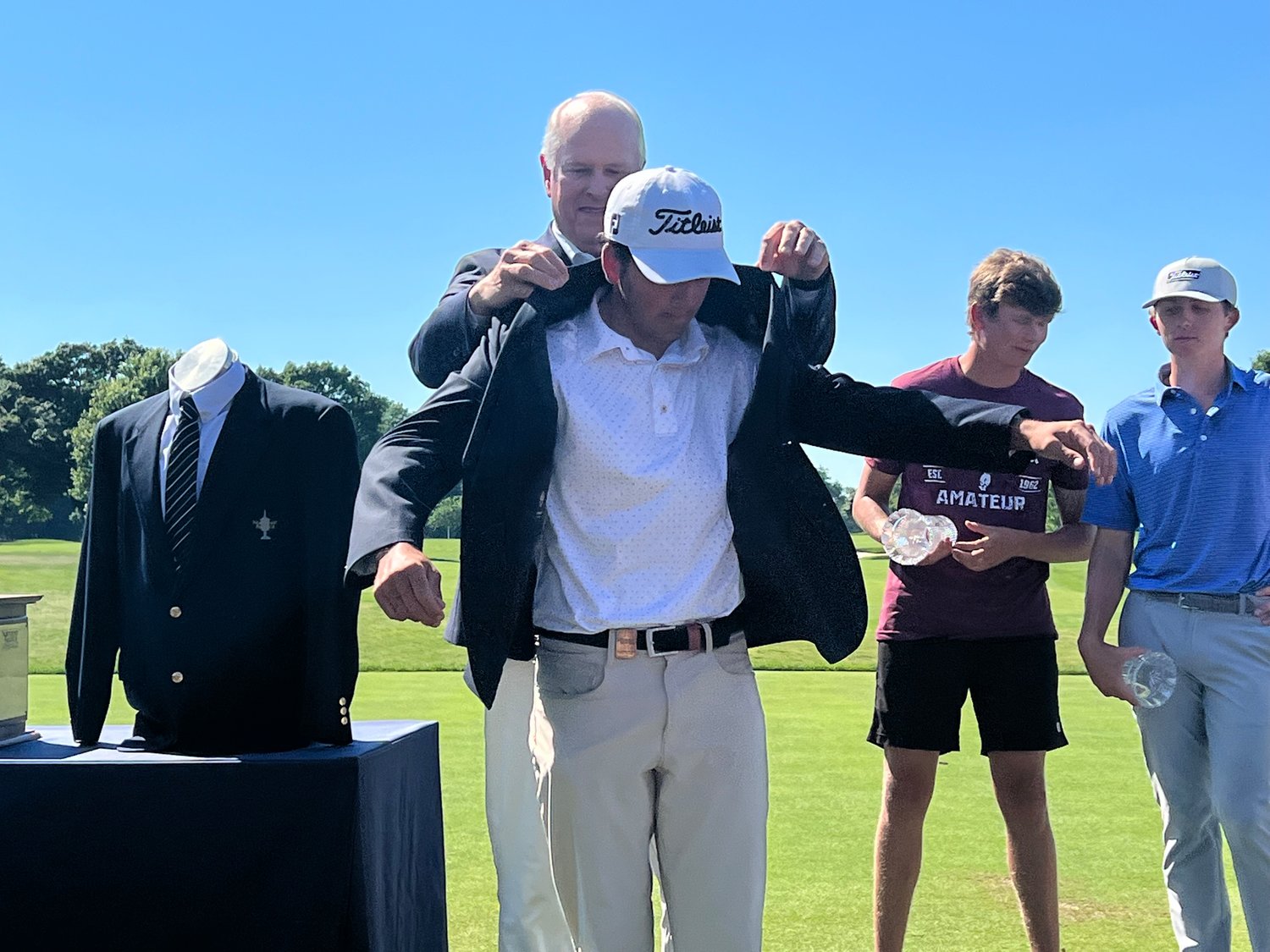 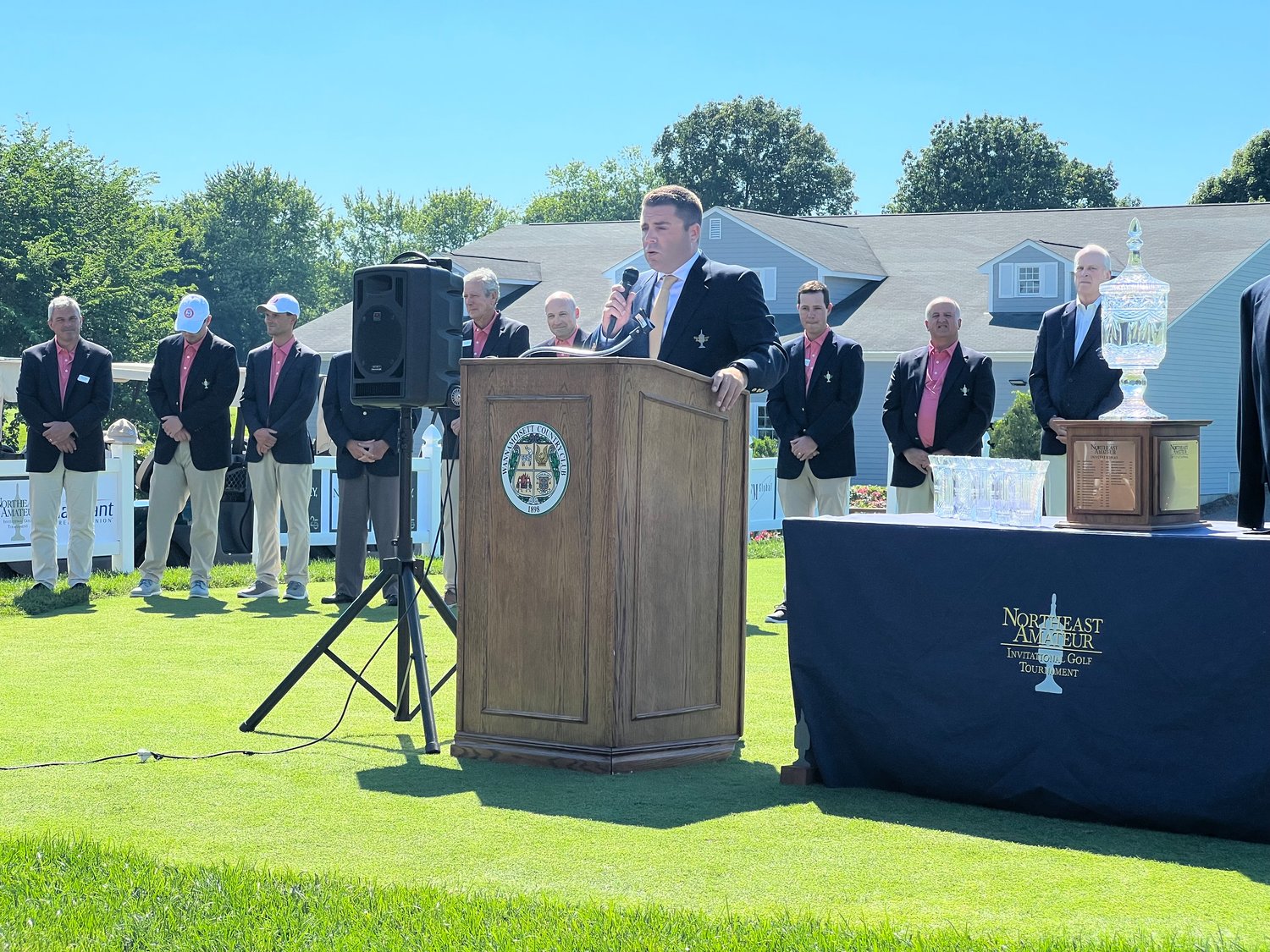 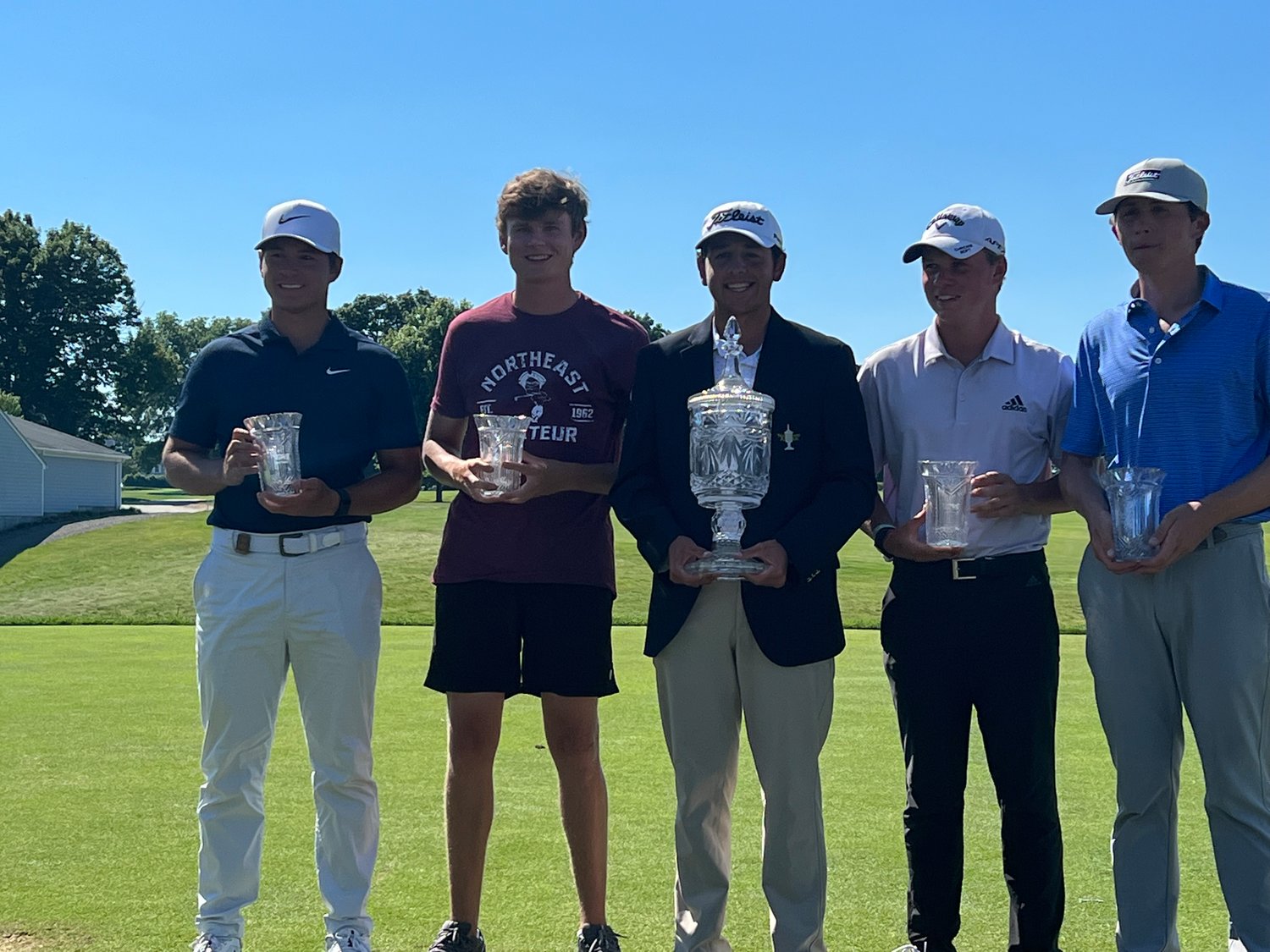 EAST PROVIDENCE — Mother Nature had nothing on reigning Northeast Amateur Invitational champion Dylan Menante as he completed a defense of his title under sweltering conditions Saturday afternoon, June 25, at Wannamoisett Country Club in Rumford.

Menante was near-ideal as the weather this week, running away with the 2022 championship in a new event record score of 19-under par.

In becoming just the fifth player in the 60-year history of the event to repeat, he finished with a 257 total. Menante started off with a torrid, 7-under 62, then carded matching 64s before "settling" for a 67 as temperatures skirted 90 degrees for Round 4.

More scores
Australian Karl Vilips carded a 6-under, 63 Saturday to vault into second place at -10, 266 total. Caleb Surratt, recent high school grad from North Carolina, finished solo third at 8-under, 268. The highlight of the University of Tennessee-bound freshman’s final round 67 was a hole-out eagle from 96 yards on the downhill par 4 11th.

Bryce Lewis, who will be teammates on the Vols with Surratt in the fall, finished in a share of fourth place with reigning NCAA champion Gordon Sargent. Each finished at -6, 270. Sargent, who just completed his freshman year at UT’s in-state/Southeastern Conference rival Vanderbilt, fell out of second place with an even-par final round 69. Lewis carded a 3-under, 66 Saturday.

Two players with local ties, former state junior amateur champion Patrick Welch and Wannamoisett member David Chatfield, had solid weeks. Welch, who will enter his season at Oklahoma in the fall, finished in a four-way tie for 10th at 3-under, 273. Chatfield, about to embark on a pro career after graduating from Notre Dame, was also among a quartet tied for 15th at 1-under, 275.

Making “waves”
Menante, who took an 11-stroke lead into the final round, bettered the previous Northeast Am scoring record of 15-under par, set first by Massachusetts native and Oklahoma State’s Peter Uihlein in 2011 and then matched by the University of Southern California’s Justin Suh in 2018.

Menante’s nine-stroke final margin of victory equaled the all-time best of the aforementioned Cook, who won his second title in 1979 by the same amount and an 8-under, 268 total.

One last news item on Menante, if he returns to Wannamoisett next summer for a possible “three-peat,” he will do so representing the University of North Carolina. He, literally, made waves in the collegiate golf world when he announced he was departing the Pepperdine University “Waves” for the “Tar Heels” on the eve of the Northeast.

Menante helped the Waves win the 2021 NCAA team title and was a key contributor as Pepperdine returned to match play portion of the 2022 tournament. The two-time All-American and two-time reigning West Coast Conference Player of the Year joins a loaded UNC squad that also made the 2022 NCAA team match play and returns four starters to the team. The Tar Heels are likely to vie with Sargent’s Vanderbilt side, among a few others, for the No. 1 overall seed in the 2023 national tournament.

More notes
Surratt’s eagle on the 391-yard, 11th was hit with what he called “a half 60-degree” wedge after he drilled a driver down to the flat of the hole, center/left in the fairway. His approach landed about sixth feet in front of back-right pin and trundled into the cup.

Gavin Walsh, of North Attleboro and a caddy at Wannamoisett, had the distinction of being the scoreboard standard bearer for final round two-ball Saturday of Northeast champion Menante and NCAA champ Sargent.

The 60th edition of the Northeast was the first to be played since the club underwent a multimillion renovation, most notably taking out dozens of trees, revamping the original Donald Ross-designed green complexes and bunkering as well as the creating of newer tee boxes allowing the course to be stretched as much as possible. The work was done by Andrew Green of A.H. Green Design.

In addition, 2022 was the Northeast’s initial summer as part of the new “Elite Amateur Golf Series,” which is bringing together amateur golf’s seven “major” championships under a single competition that awards players points towards exemptions into future USGA, PGA TOUR and Korn Ferry Tour events.

Last but not least, Brad Tilley of Easton, Conn. earned the Joseph Sprague Award, named for the late local golf legend and  East Providence resident, for finishing as the low mid-amateur in the field at 1-under, 275. A mid-amateur is a player 25-years of age or older who has a USGA handicap index of 3.4 or lower.

Tilley, 39, in a "reinstated" competitor who played collegiately at the University of Virginia then professionally on the PGA Tour Canada and PGA Tour Latinoamerica before regaining his amateur status in 2017.