PORTSMOUTH — From an upgrade of a road leading to campus to air conditioning for its field house, the proposed capital improvements at Portsmouth High School have drawn the most scrutiny from … 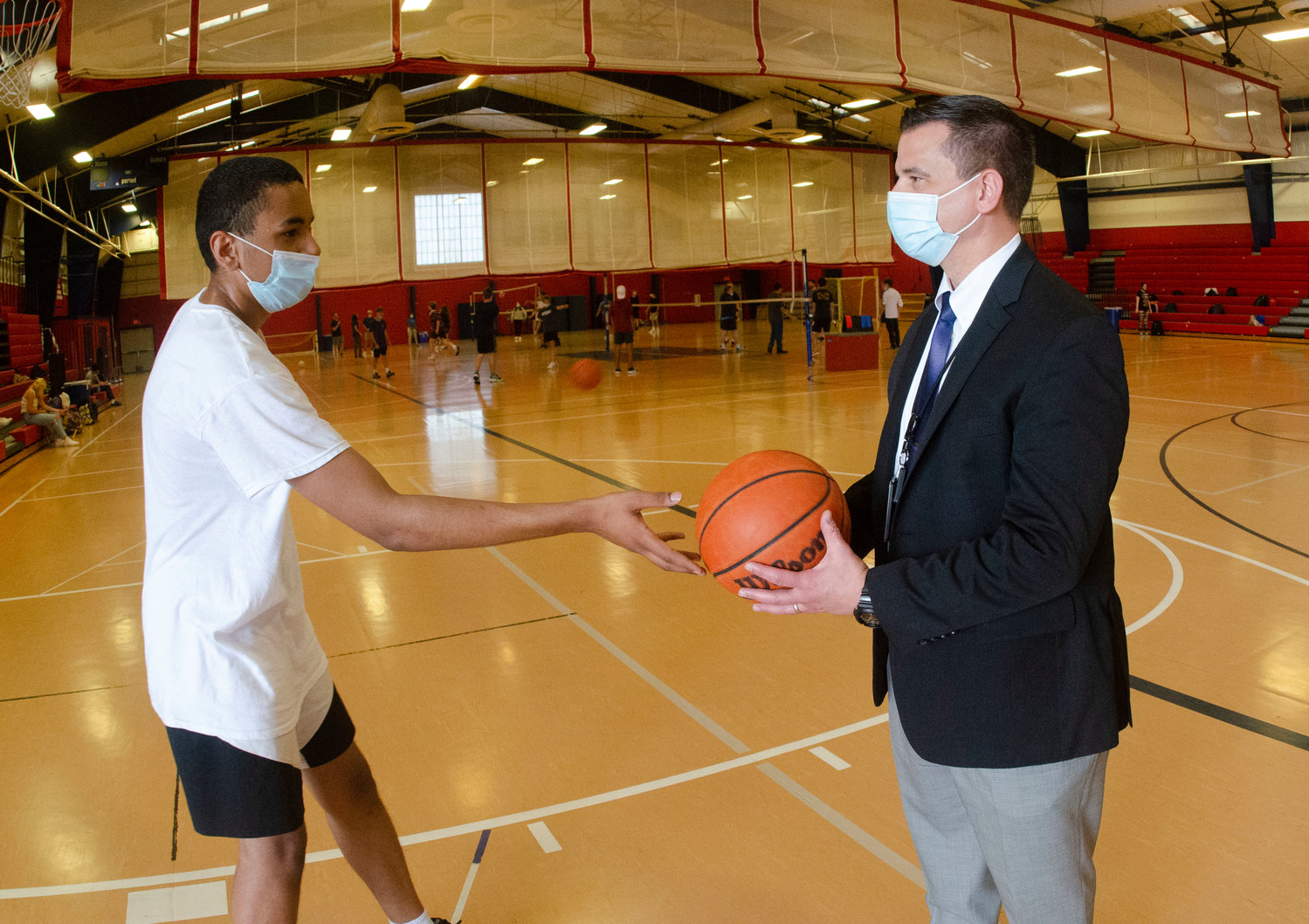 Darin Grady, a junior at Portsmouth High School, chats with Superintendent Thomas Kenworthy inside the field house during a recent gym class. The school district wants to install air conditioning in the building so that the floor is safe during the warmer months, and to prevent rusting of the exercise equipment upstairs.
Richard W. Dionne, Jr. 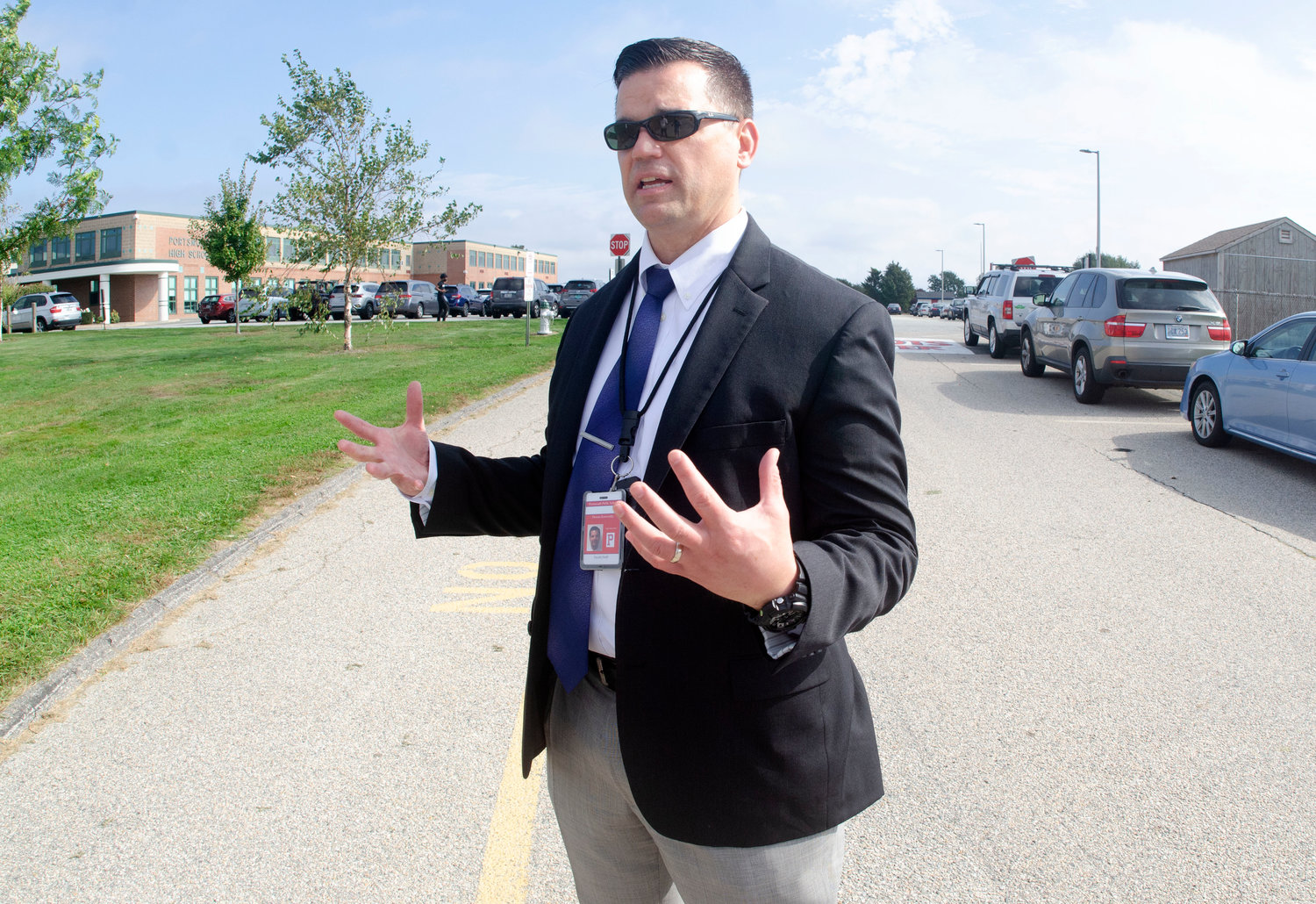 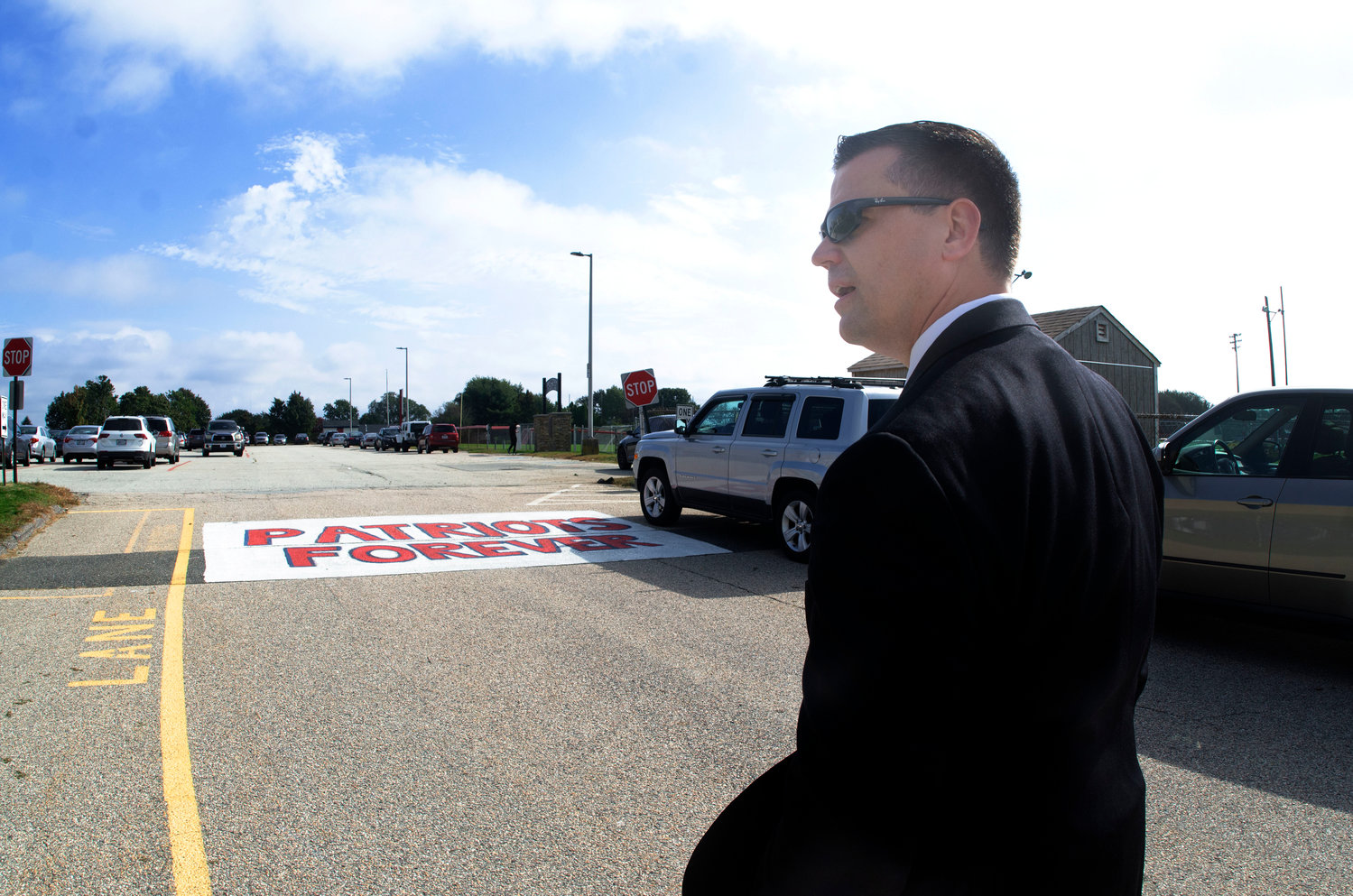 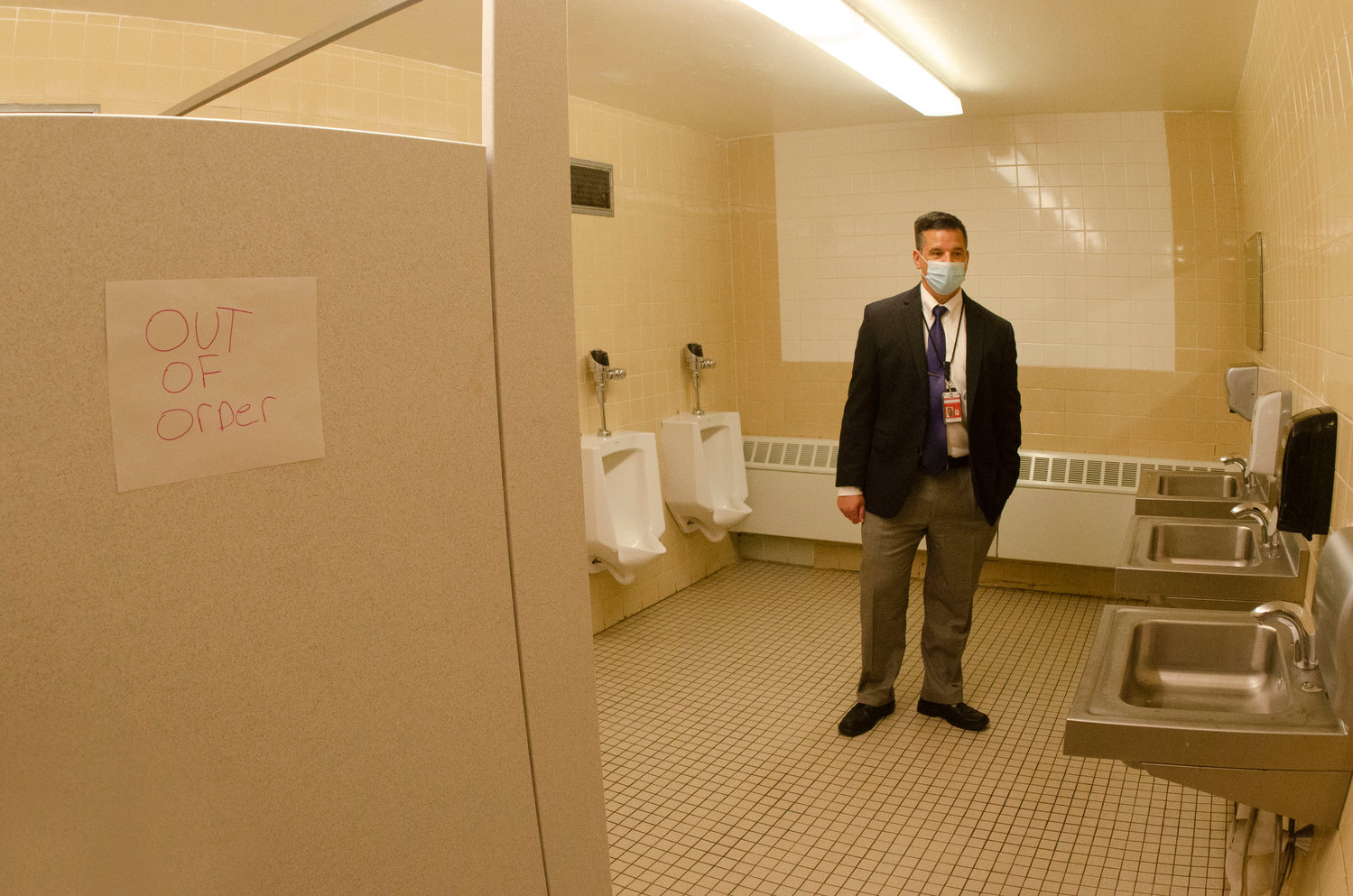 All of the schools’ bathrooms would undergo complete renovations if voters pass the bond on Nov. 2, which is needed for state approval of the capital improvements.
Richard W. Dionne, Jr. 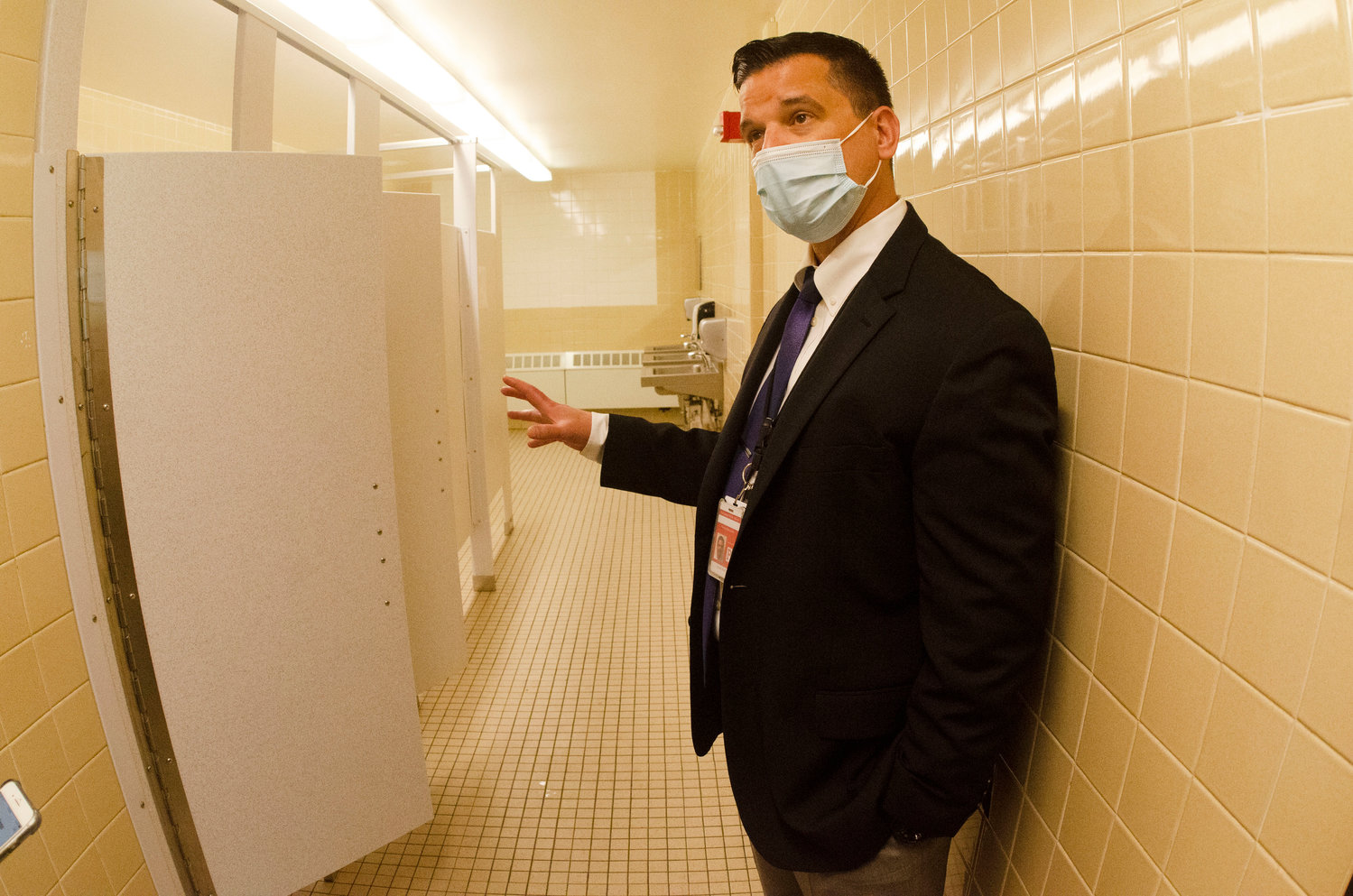 All of the schools’ bathrooms would undergo complete renovations if voters pass the bond on Nov. 2, which is needed for state approval of the capital improvements.
Richard W. Dionne, Jr.
Previous Next
Posted Monday, October 25, 2021 8:01 am
By Jim McGaw

PORTSMOUTH — From an upgrade of a road leading to campus to air conditioning for its field house, the proposed capital improvements at Portsmouth High School have drawn the most scrutiny from local residents, according to Superintendent Thomas Kenworthy.

With that in mind, Kenworthy invited a reporter to PHS to make the case for the upgrades that are part of the  $21.44 million bond (Question 1) that voters will decide on Nov. 2.

If Question 1 doesn’t pass, the district will not be able to get its plan approved for much-needed health and safety improvements at all four schools, he said.

“Approval from the state is pending approval of the bond,” he said. “Just like anything else, with any major purchase you make, you have to prove you have the financing. We would have to pull back and decide what our next steps are going to be. That doesn’t sound like the end of the world, and we could do that, but the real unfortunate part is we’re already two years beyond having any sort of approved plan with the state. We started this discussion two years ago and we had to change it up with COVID.”

The district, he noted, originally proposed $65 million in major capital improvements, but scaled things back after the pandemic hit to focus on health and safety issues. Without voter approval and a state-approved plan, the district won’t be eligible for any reimbursement, which figures to be significant: 40 percent of the town project cost would go back to the town.

Voter and state approval would also allow the work to proceed much faster than it would through ongoing maintenance and capital improvement requests in the budget, he said. “If the bond passes on Nov. 2 and our plan gets state approval, boom — construction starts next summer. Over the next three summers, we would be doing this work,” Kenworthy said.

Without approval, the same work would take “10 to 20 years,” and that doesn’t take into account any other needed improvements that may arise during that time, he said.

Here are the improvements specifically targeted for PHS:

The improvements slated for this one-way road, which enters the school from Turnpike Avenue to the west, has prompted many questions from residents, according to Kenworthy.

“There are three roads leading into the high school and we’ve gotten some questions on why a road project is on here,” he said. “This one is completely on school property, so we own and are responsible for everything —  maintenance, upkeep, top to bottom. The other two, Education Lane and Patriots Way, are town roads with houses and streets off them.”

The PHS campus has a parking crunch, and the plan not only addresses safety issues on Memorial but would add additional spaces for vehicles, he pointed out.

“Especially when you have kids parking on both sides, it’s definitely a safety concern,” he said. “The plan would be to widen it, put full sidewalks on both sides, and refinish it. That would extend all the way to the area in front of the field house. Overall, it adds 25 additional parking spaces.”

The fact that installing air conditioning in the PHS field house wasn’t included in the original $65 million capital improvement project, but made its way into the $21.44 million, has also raised questions.

“When we pulled back and decided to focus on health and safety, we started by pulling all those projects from the original plan. But then, there were a few other things we felt we could get in there,” Kenworthy explained. “And then when COVID hit, what became allowable under ‘health and safety’ also expanded a little bit.”

The field house was built in 2004, thanks to voters’ approval. “This was actually the last School Department bond — 17 years ago,” the superintendent said.

Over time, however, it’s become clear that air conditioning would make the building not only safer, but more functional, he said.

“The HVAC system itself is working fine, but there isn’t air conditioning and from June through the summer and into September, the humidity really makes the floor a safety concern,” he said.

Making the building a temperature-controlled environment would also help prevent equipment in the upstairs weight and exercise room from rusting, he said.

AC could also mean increased revenue for the district. “It would increase the potential for us to be able to rent it out more,” Kenworthy said.

In addition, there’s been talk about establishing an island shelter at the PHS field house; it was a topic of discussion just this month during a public workshop hosted by the town and the Southeast New England Program Network regarding local climate resilience planning. An AC system would go a long way toward making that a reality, Kenworthy said.

The one common denominator among all the schools are full renovations of all bathrooms, at a cost of $4.6 million — an average of about $575,000 per building. That’s a figure some residents can’t get their heads around.

School officials, however, argue that all bathrooms are beyond their useful life, and the renovation plans are well beyond mere plumbing and fixture replacements. They involved extensive reconfigurations to accommodate full compliance with the Americans with Disabilities Act (ADA), single-user accommodations, staff restrooms, and janitorial facilities.

The renovations require the complete demolition and reconstruction of the concrete floor slab, walls, and ceilings, as well as all sanitary piping, all domestic water piping and all vent piping. All fire protection and electrical systems will be removed and replaced with new devices and fixtures. The work also includes new roof penetrations for venting, as well as completely new exhaust and ventilation systems.

“I don’t think there’s ever been a complete renovation of these,” Kenworthy said while showing the bathrooms in the east wing of PHS, which opened 58 years ago. “These bathrooms are first on the list for the high school.”

Although there have been fewer questions raised by residents about the proposed work at the two elementary schools and the middle schools, Kenworthy also touched on those upgrades.

“The two elementary schools would be getting brand-new HVAC systems to allow air conditioning in the classrooms; I think people are happy about that,” he said.

The proposed elevator at Hathaway is a must in order to comply with ADA, he said. “If there’s a student with a mobility concern — and it happens year to year — we have to move the classroom,” the superintendent said. “Or, if in the middle of the year a student breaks his leg and he was in an upstairs classroom, we have to swap it out. It causes all sorts of disruptions during the school day.”

The superintendent was asked how he feels about the chances of the school bond being approved.

“We know with anything like this, there’s going to be a certain percentage of people who are against the concept of getting a bond to do this type of work. I think we’ve made the arguments as to why now is the right time, and it makes sense for Portsmouth to do that,” he said.