After recently notifying 10 couples that weddings they had scheduled this spring and summer at the Meeting House at Tiverton Four Corners could not take place there, the owner of the venue, Rosalind … 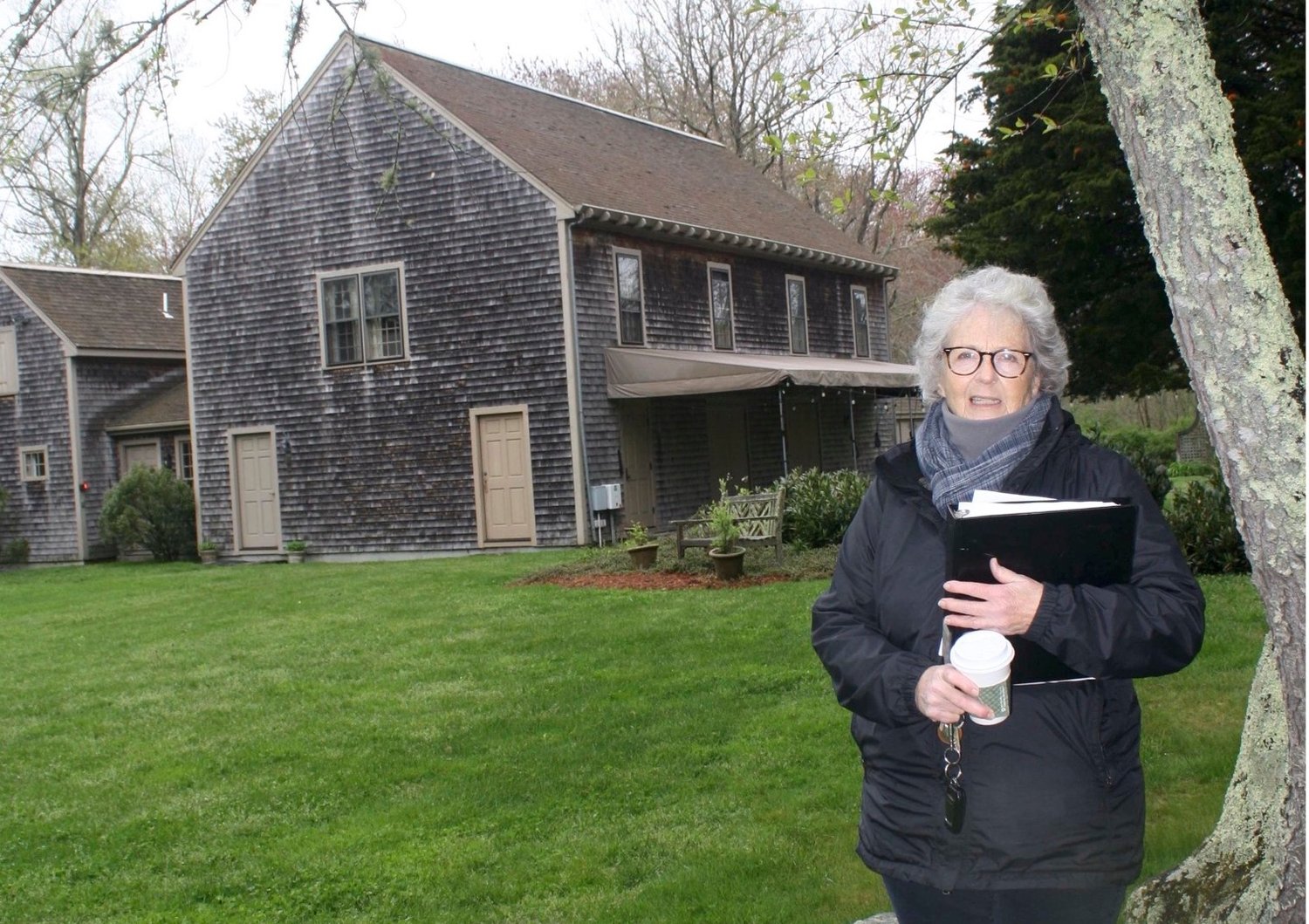 Rosalind Weir outside the Meeting House at Tiverton Four Corners.
Posted Wednesday, May 11, 2022 8:55 am
By Ruth Rasmussen

After recently notifying 10 couples that weddings they had scheduled this spring and summer at the Meeting House at Tiverton Four Corners could not take place there, the owner of the venue, Rosalind Weir, said she is pondering ways to resolve the zoning dispute with town officials that made the cancellations necessary.

While Weir has tangled with town officials in the past on business-related matters, the latest skirmish began in late September 2021, when she received a town-issued Notice of Violation saying use of the Meeting House as a for-profit commercial event venue was a violation of Tiverton’s zoning regulations. Weddings, the notice said, are not part of the zoning ordinance’s permitted uses and are therefore “illegal and unauthorized and must cease immediately.”

Weir says she scheduled no additional weddings after receiving the notification, but she did not immediately cancel the contracts already in place because she was sure a satisfactory solution could be worked out with the town.

“I really thought, ‘This is a mistake,’ said Weir. “Then a long period of time went by where we were back and forth in discussions with the town.”

It was not until late April that she realized a resolution was not forthcoming, so she started making calls. The most difficult conversations were with couples who had May weddings planned at the venue. “We did find everybody a place,” she said. “And people were very nice about it, oddly.”

She believes the historic rural setting and park-like grounds surrounding the main building are ideal for couples seeking a low key alternative to traditional, grander locations. The building was designed by her late husband, Jim Weir, an architect who wanted to replicate the simplicity of traditional Quaker meeting houses.

The Meeting House is known for the variety of arts events, exhibits, theater performances and festivals held there each year. “There have been far fewer weddings,” Weir said. “I think the most we ever had in any one year was 24.”

For many reasons, Weir is perplexed and angry by the town’s stance. She says weddings have been held continuously at the property — from 1998 through 2021 — with the exception of a hiatus during the peak of the pandemic. Town officials were well aware they were taking place and seemed to have no objection, she said, since they routinely approved her applications for tent permits.

Weir uses the word “vendetta” in describing the latest action by local officials. She said the town closed her business several years ago due to a dispute relating to septic capacity. She prevailed in a 2017 lawsuit that she initiated, and the town settled for $150,000. She believes the settlement created a “burr in some backsides” and she is still feeling the repercussions of that resentment today.

Part of her anger is directed toward the town administrator, Chris Cotta, as she believes several of his public comments, including those relating to insufficient parking and an inadequate septic system at the venue, are incorrect. She also disagrees with his assertion that the town has argued against the use of the Meeting House for weddings for the past 13 years.

Asked to respond to Weir’s comments, Cotta said he does not dispute her statement that the number of parking spaces available conforms to code requirements, but he noted too that parking has always been a “bone of contention” as it relates to the Meeting House and weddings. He said it is debatable that spaces available to Meeting House guests on contiguous parcels are more than sufficient for weddings and other large events, as Weir claims.

“There are only so many spaces available [at Tiverton Four Corners] and you can’t have two functions using the same parking space at the same time. That’s the crux of the issue.”

Cotta also conceded that Weir’s statement that the septic system she installed on the property in recent years is sufficient and will accommodate 130 people “is probably correct.”

“So that’s why this goes back 13 years. She disagrees — but this has been going on a long time.”

The primary issue, he said, is what the building is zoned for and what is permitted there.

“That is different than what she is saying,” he said. “Right now her building is permitted for an artist’s gallery. She can come in and ask for a different use, which she has not done.”

Additionally, because the property is in a watershed area, he said an environmental review study is required if the business applies for a Special Use Permit.

He denied that he and other town officials have a vendetta against Weir or her business.

“I don’t have an ax to grind with her, because I was appointed in 2020. I did not review the files until we issued the Notice of Violation last year for having a wedding with no permit. We have a new solicitor who was not part of the 2017 [dispute]. We have a new planner, and a new building official. All of us are new.”

Cotta acknowledged, however, that those who were familiar with the history of the business and the property weighed in with town officials.

“They came to us and said, ‘You can’t allow this to go on, because it is a zoning violation.’ And we looked into it, and they were right.”

Weir said she is continuing to examine options and that she trusts the town is supportive of the desire for businesses to do well.

From the start, the work she and her husband decided to undertake at Tiverton Four Corners was a passion project. Their involvement, beginning decades ago, was critical to the transformation and preservation of the village and is key to what it is today.

“With professional backgrounds in design—Jim’s in architecture and mine in garden design, the preservation and restoration of the village was a good melding of our interests,” Weir says. “I am most happy that it is artists, arts events and boutique retail that have remained the catalysts for attracting people to Four Corners.

“The whole village has been well preserved, because the owners—and it’s not just us—everybody’s kind of pulled an oar here to make sure this village stays intact…If you look up and down the east coast, there are only a handful of villages that have been preserved. And they can only be preserved because they can be made into useful spaces.”

What was that boat on stilts doing?

Waving the flag in Little Compton

What was that boat on stilts doing?