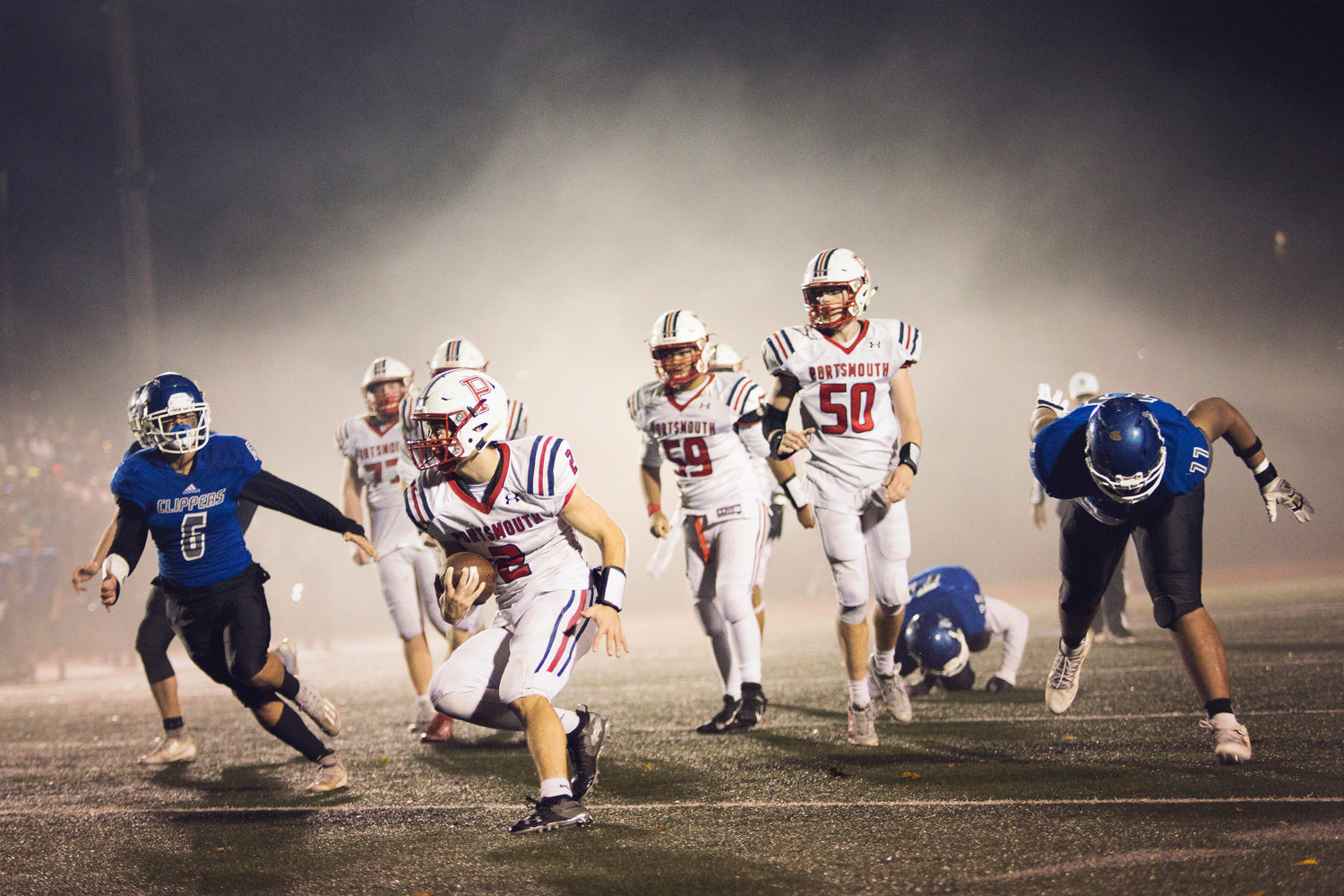 Patriots quarterback Benny Hurd carries the ball as the fog envelopes Portsmouth and Cumberland players during the second round of the Division I playoffs on Friday. Portsmouth prevailed, 24-7, and will face North Kingstown in the semifinals at 3:30 p.m. Saturday, Nov. 20, at Cranston Stadium.
JULIE FURTADO 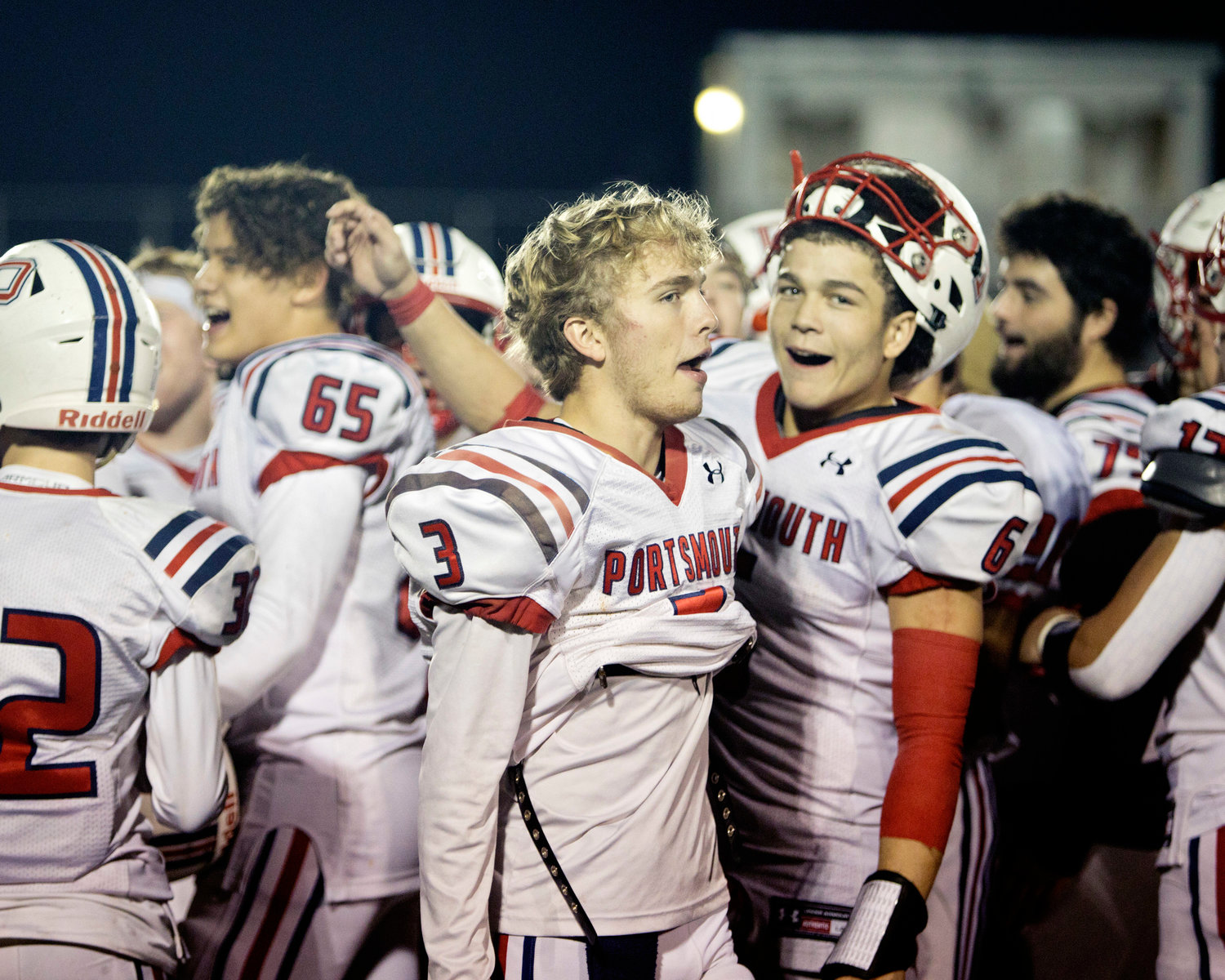 Andrew Perry (3) and Marcus Evans celebrate with their team after winning.
JULIE FURTADO 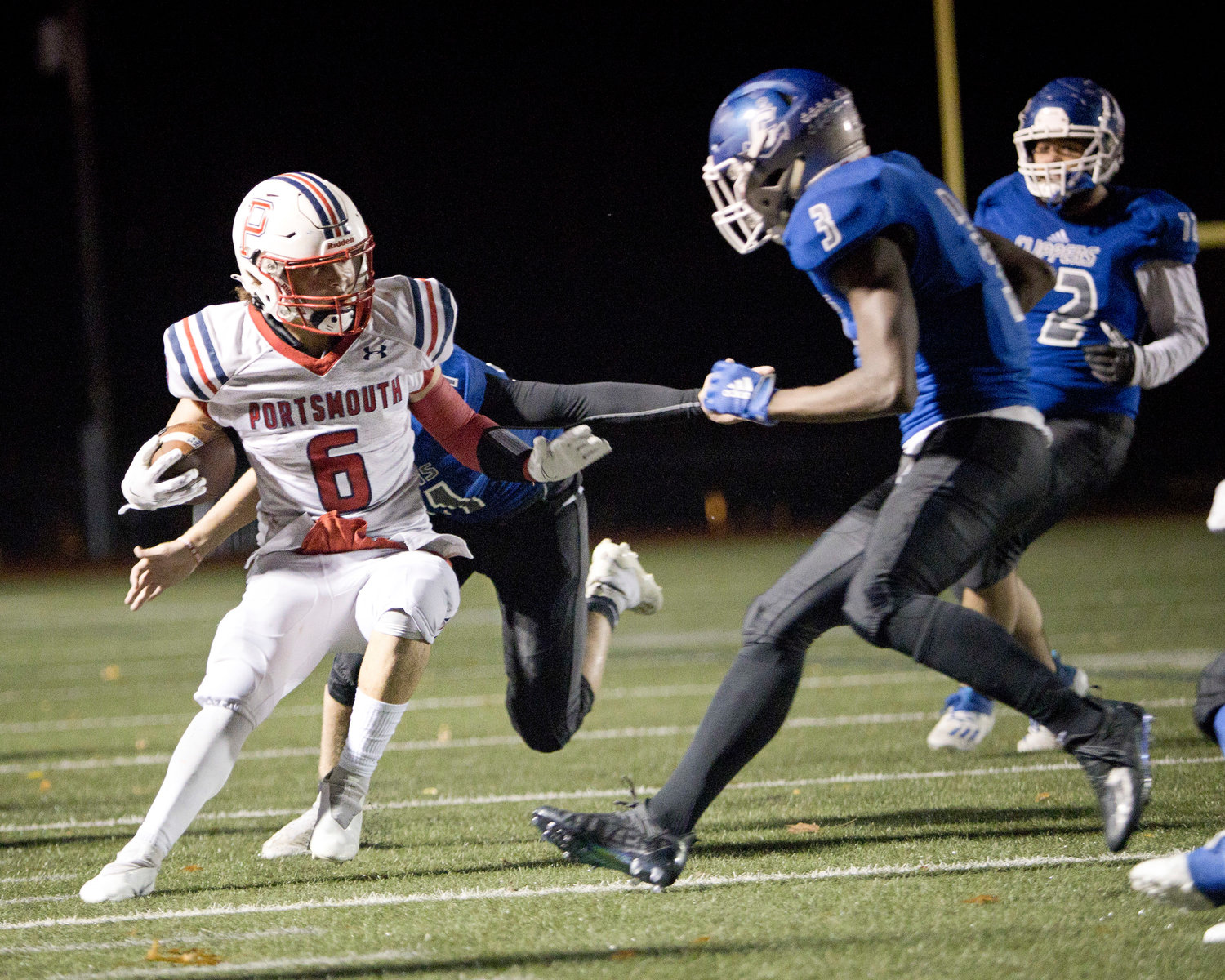 Marcus Evans is pressured by the Cumberland defense during Friday’s contest.
JULIE FURTADO 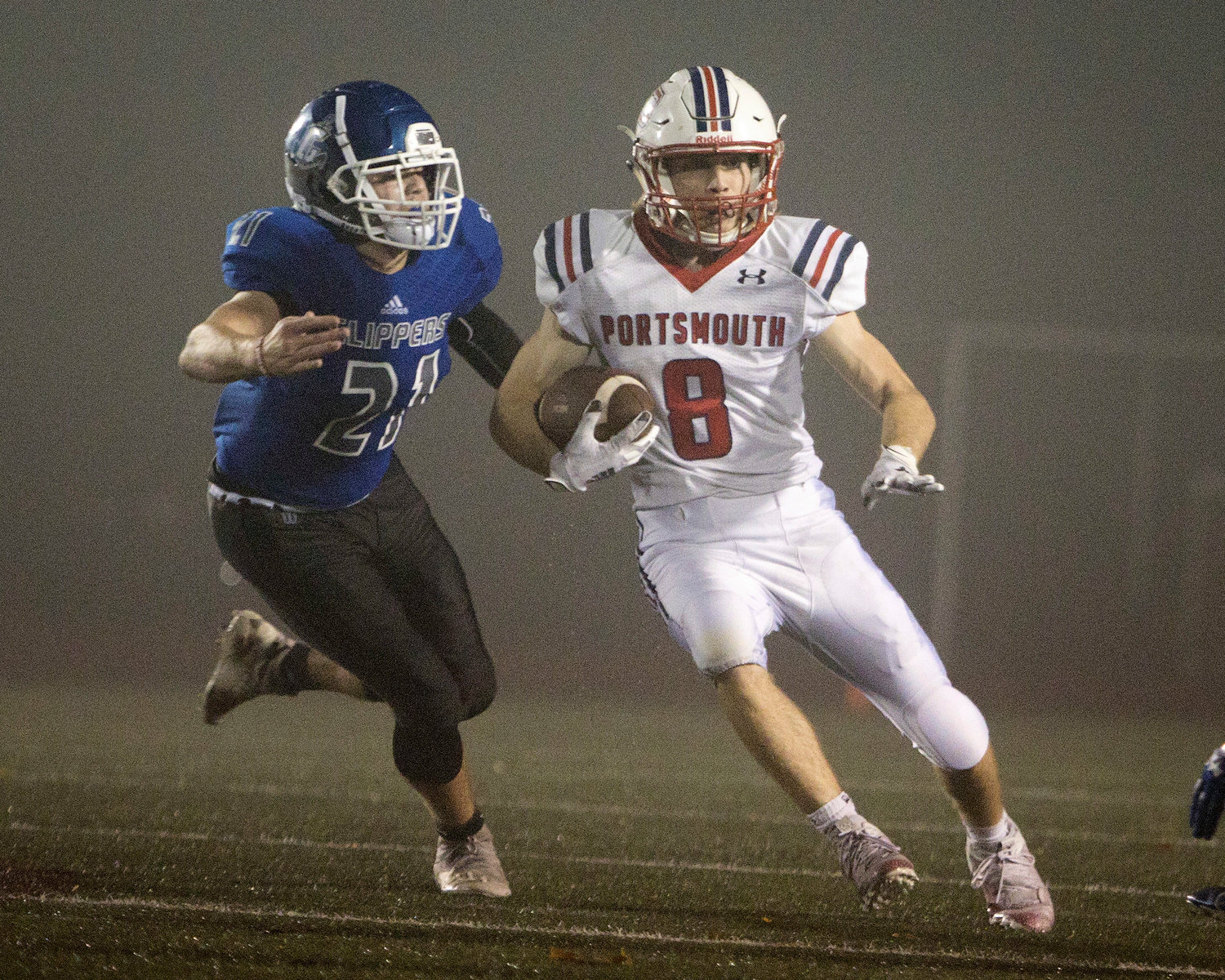 Jack Cianciolo looks for an opportunity while pressured by a Cumberland opponent.
JULIE FURTADO 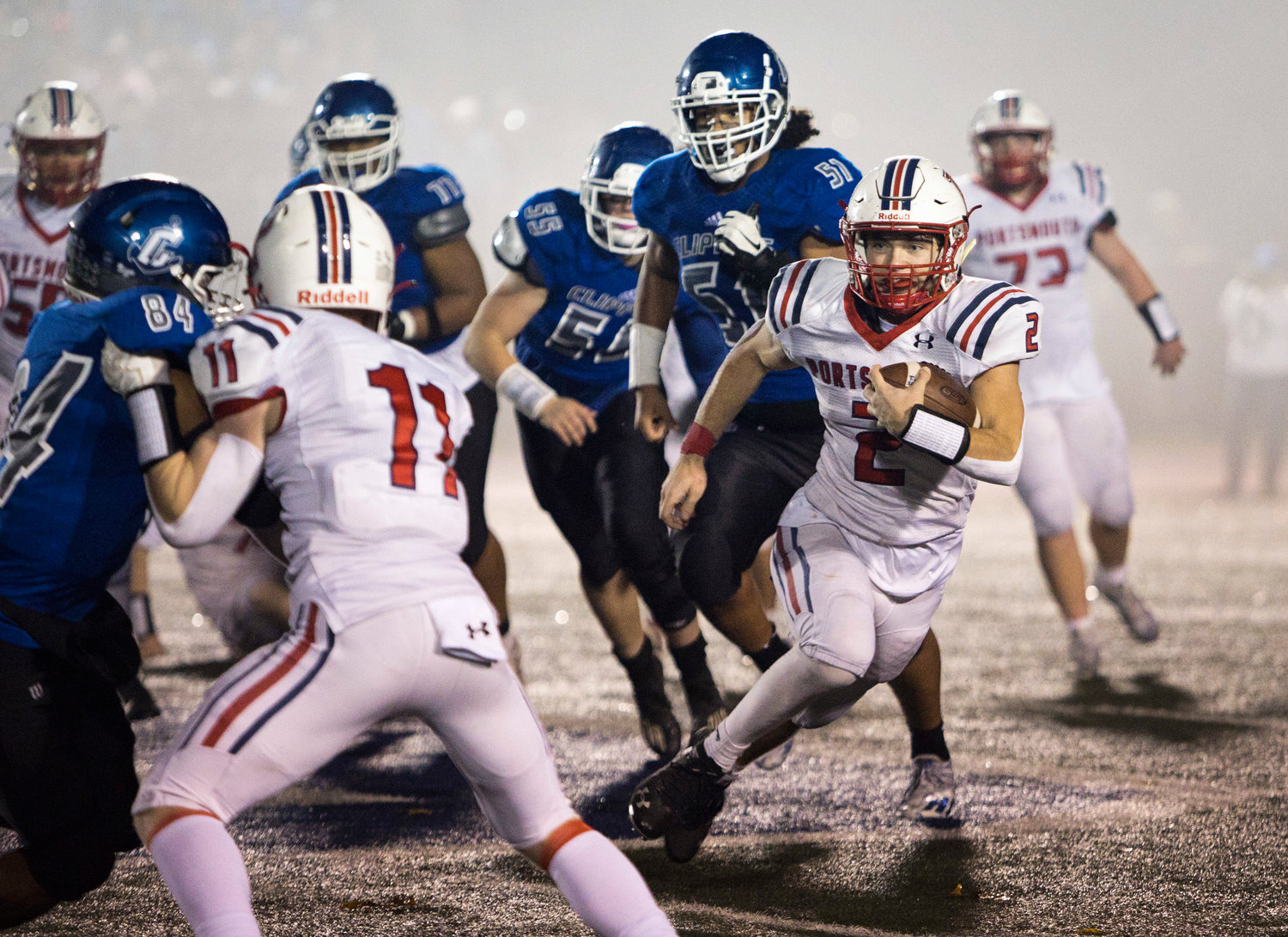 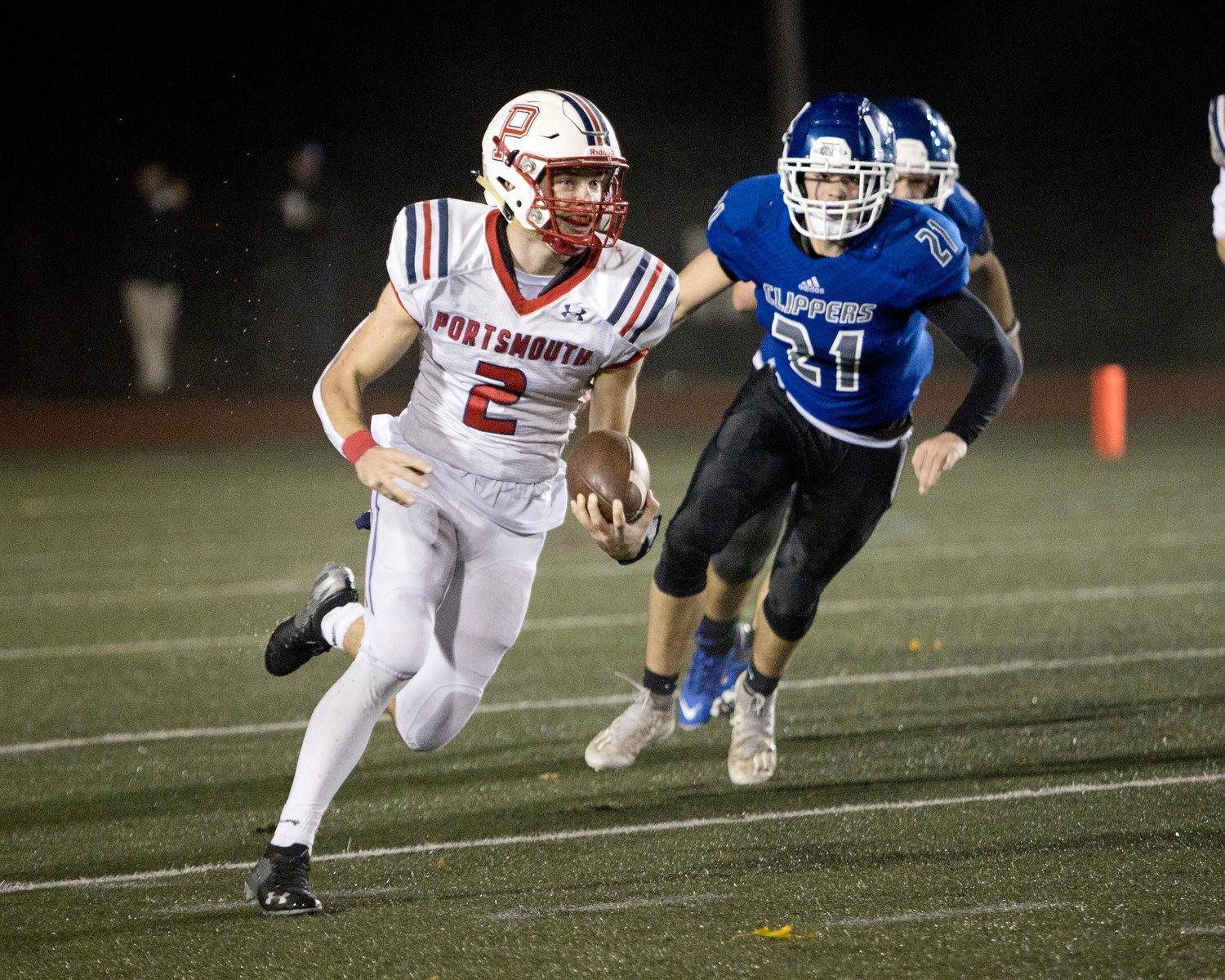 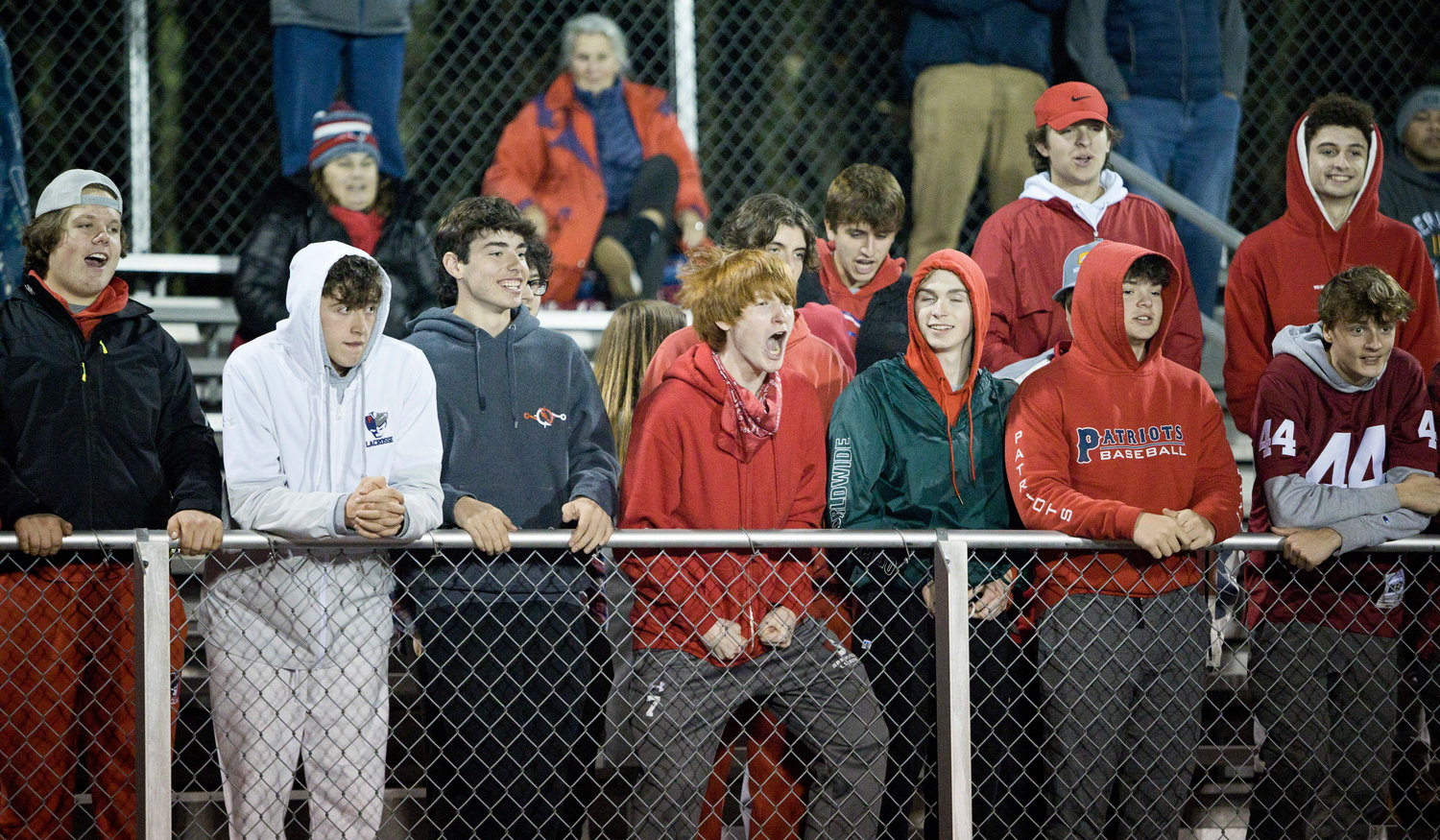 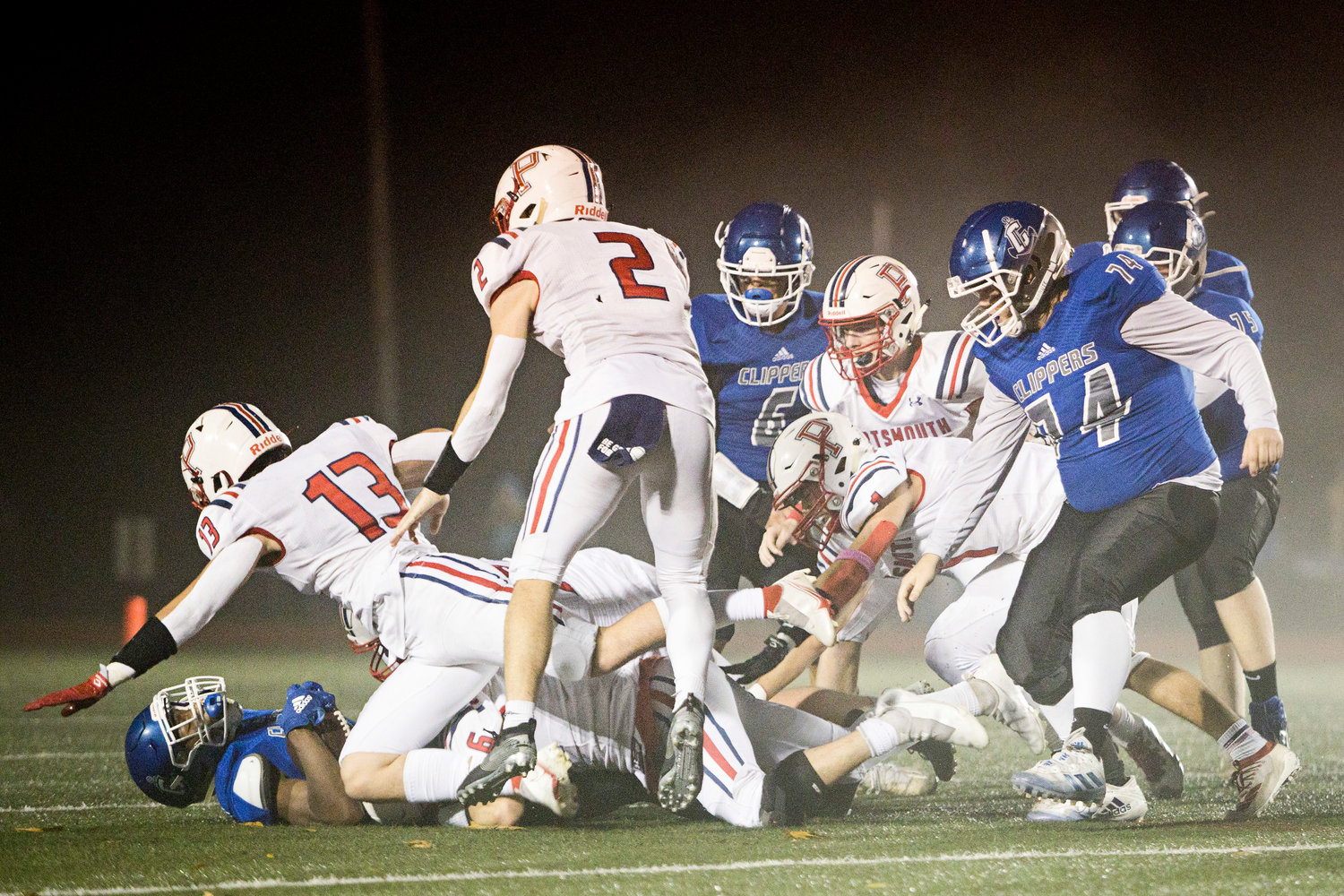 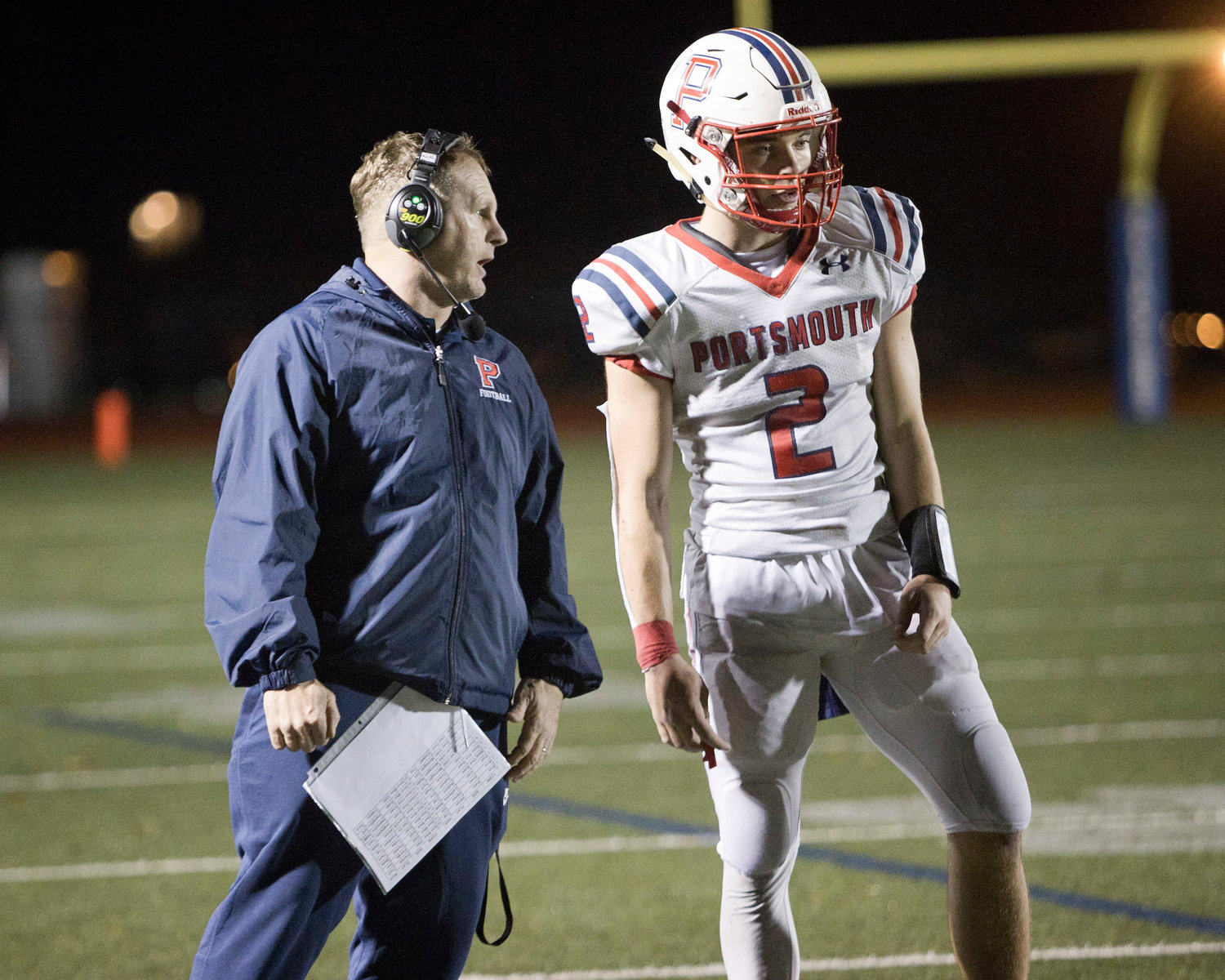 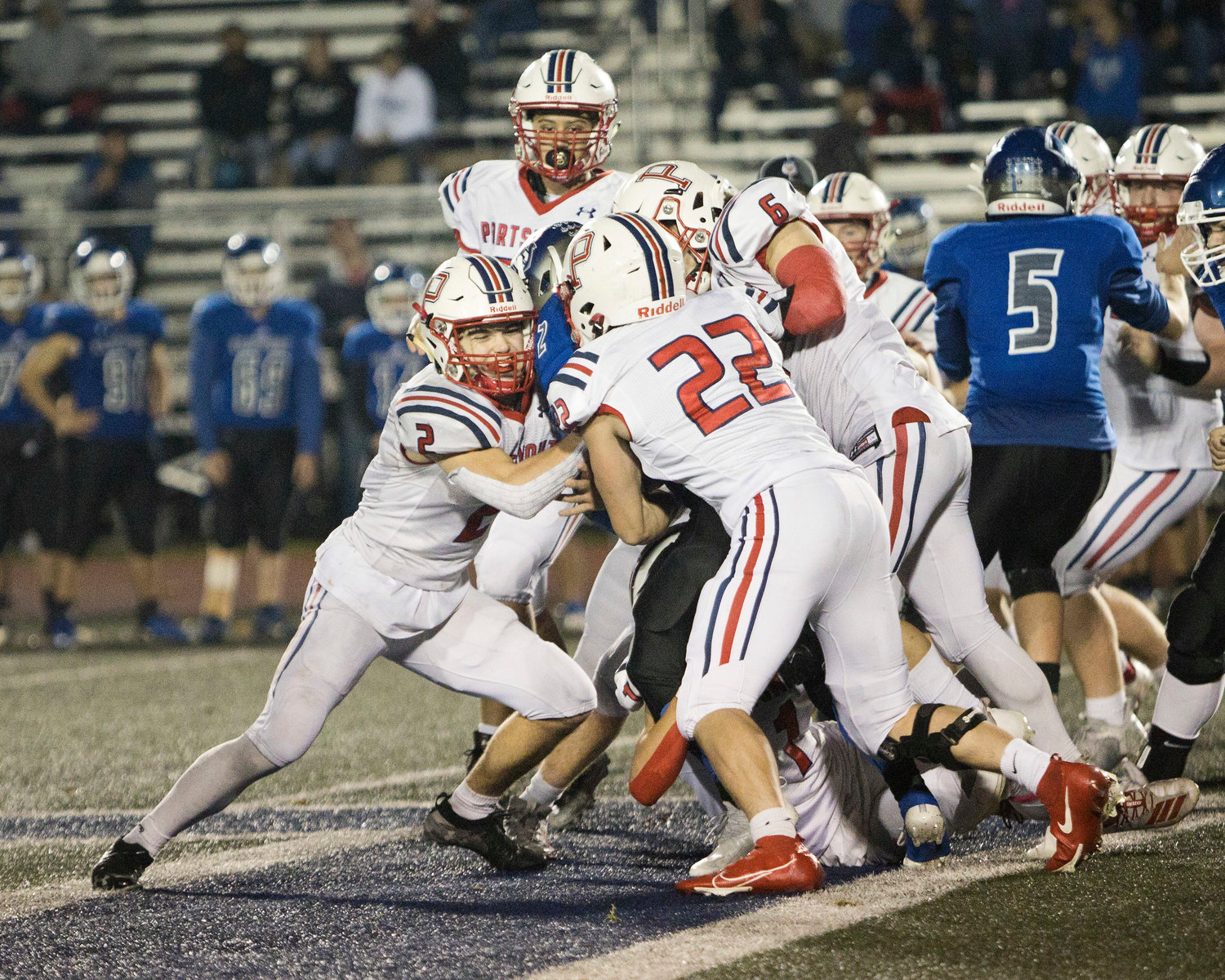 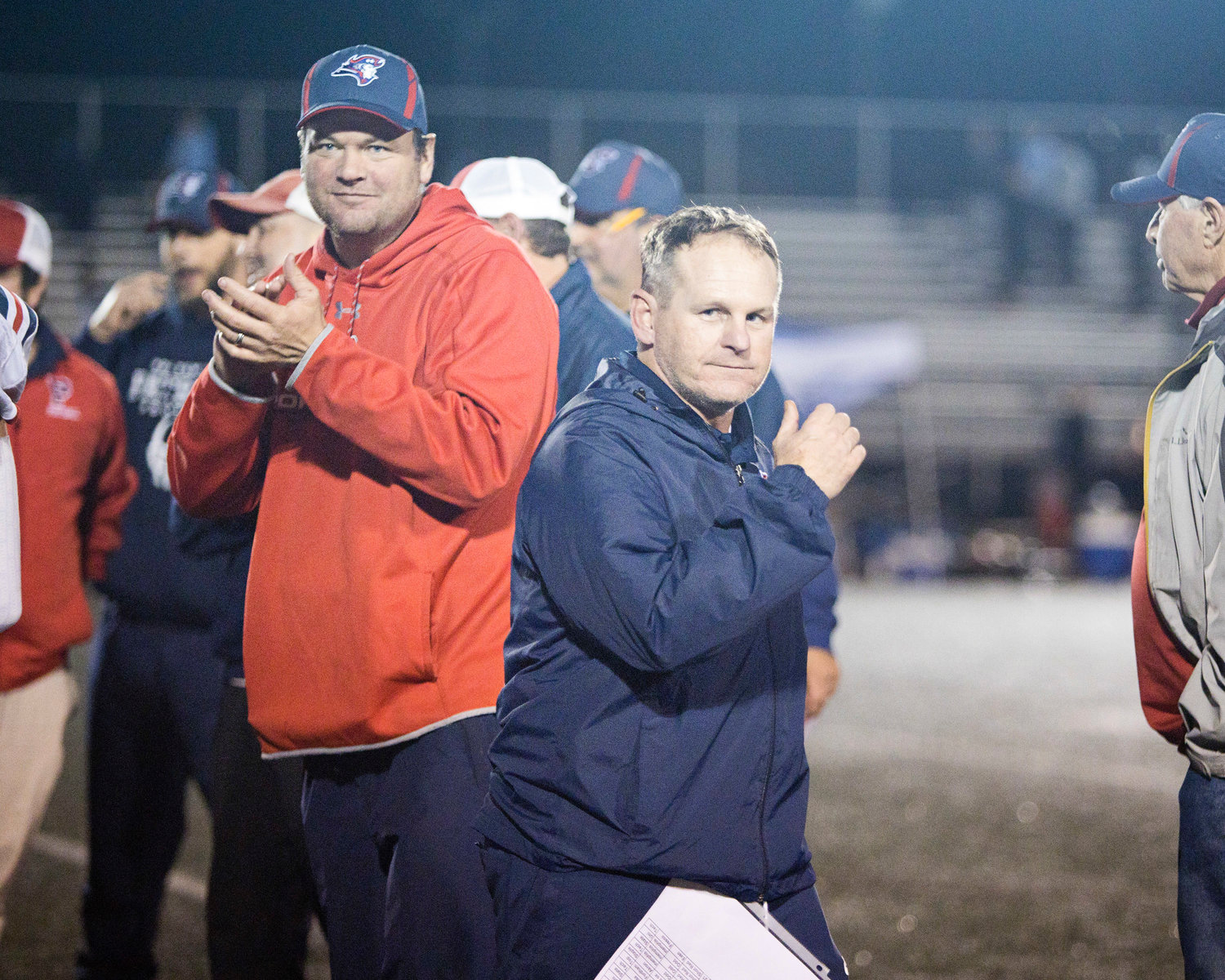 Coaches Ben Hurd (left) and Dustin Almeida react after their team beats Cumberland 24-7 in the second round of the Division I playoffs.
JULIE FURTADO 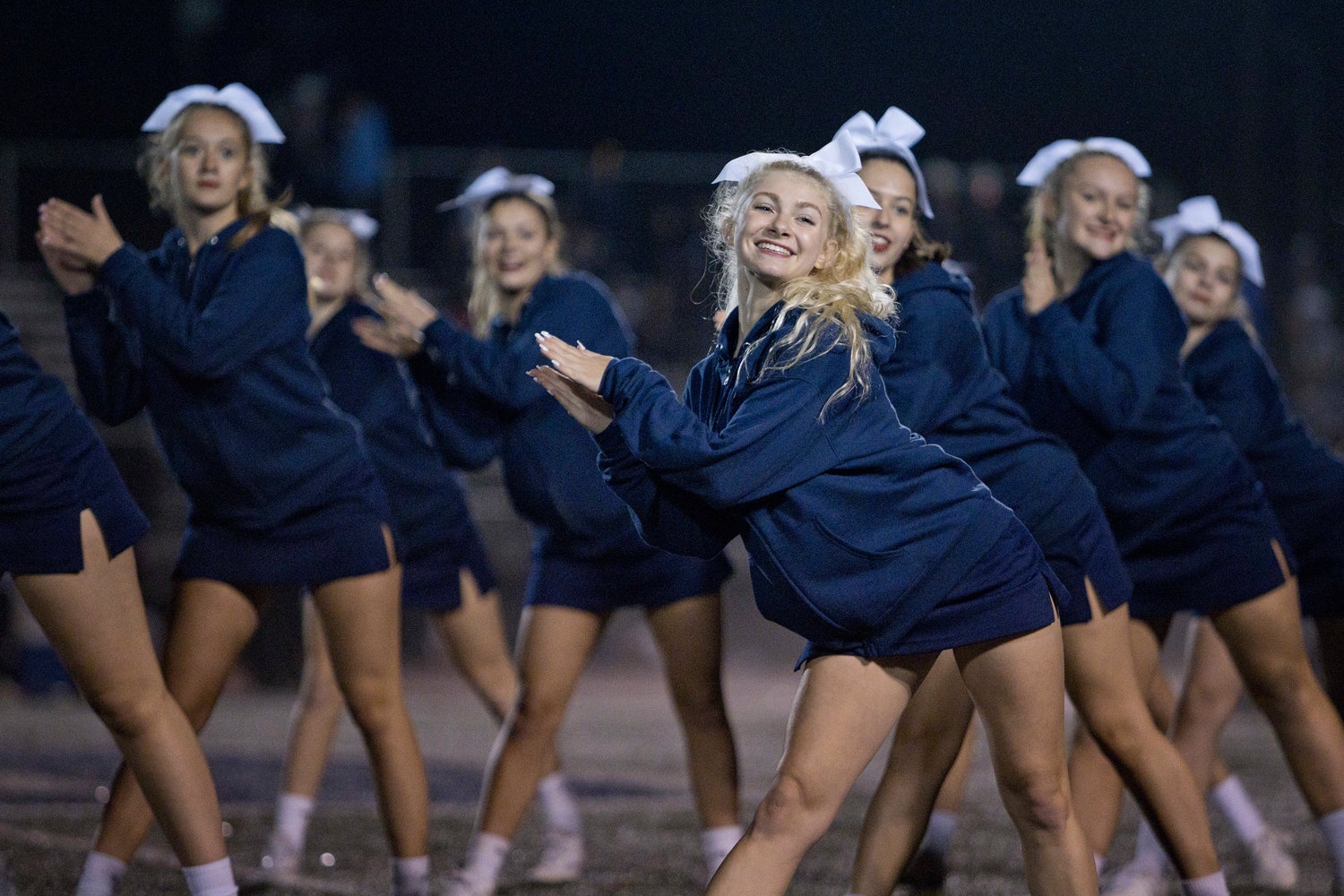 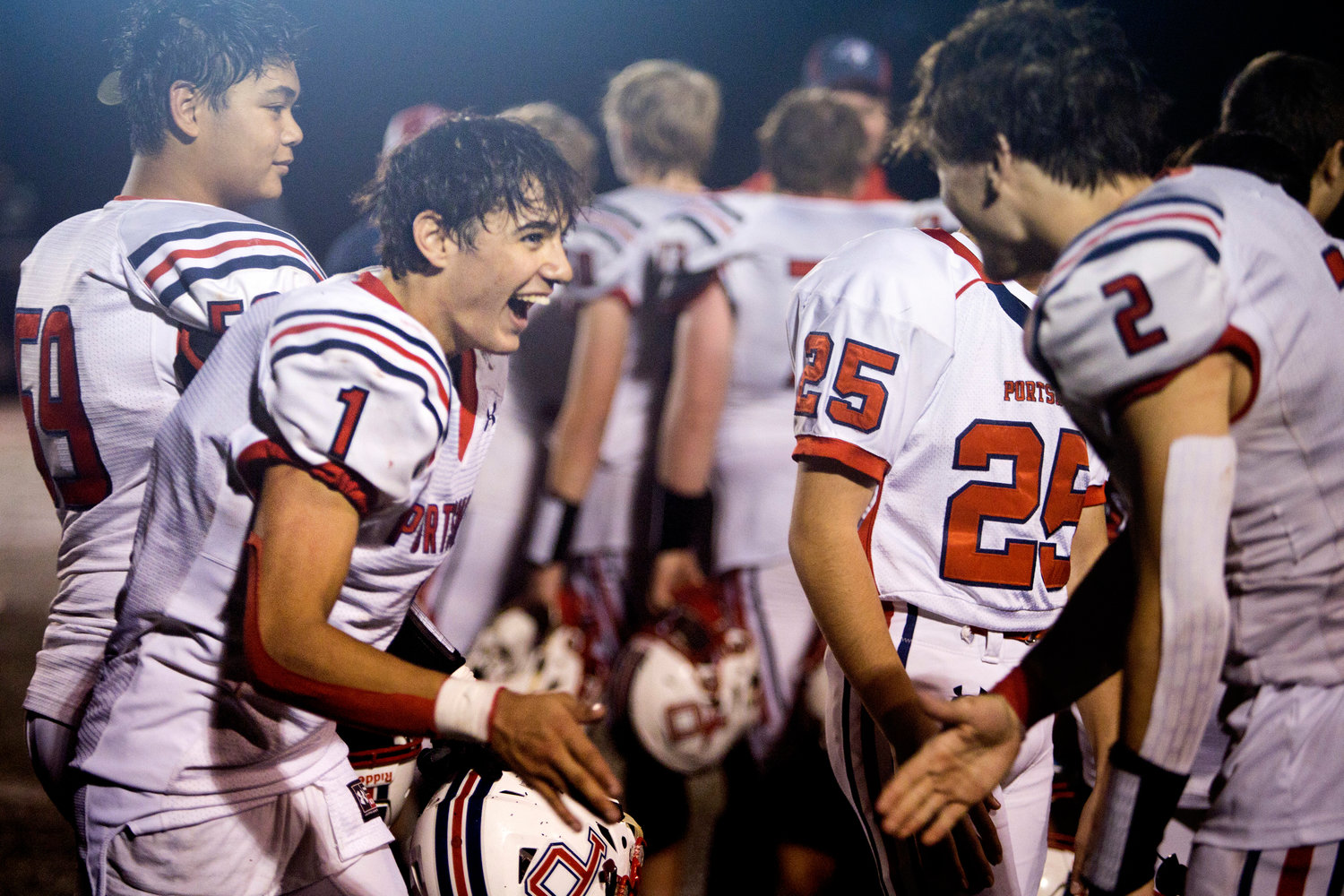 Benny Hurd looks for a pass as a Cumberland opponent attempts to stop him.
JULIE FURTADO
Previous Next
Posted Monday, November 15, 2021 3:12 pm

PORTSMOUTH — The Portsmouth Patriots will have a chance to avenge their last-second loss to North Kingstown in the regular season when they face the Skippers in the Division I semifinals this Saturday, Nov. 20.

The Patriots advanced via an impressive 24-7 win in the second round against Cumberland on the road Friday night.

On a foggy night following heavy rains that subsided before game time, the Patriots used a strong running game that took precious time off the clock, wearing down the Clippers’ defense and giving the home team few opportunities to score.

Portsmouth started the game with an eight-minute drive that ended with Marcus Evans running the ball into the end zone.

He wasn’t the only one who had a successful rushing game. Quarterback Benny Hurd scored two touchdowns and gained nearly 180 yards on 19 carries, while Dylan Brandariz, Connor Conheeny and Jack Cianciolo also ran the ball well.

The Patriots advanced to face North Kingstown, seeded No. 2 in Division 1-B, in the semifinals on Saturday. The Skippers lost to Bishop Hendricken in the semifinal round of the state championship playoffs, which placed them in the Division I semis.

North Kingstown beat the Patriots during the regular season, 31-28, with a field goal in the game’s waning seconds.