PORTSMOUTH — Austin, a tall teenager sporting a mustache and long curly hair that his Batman cap can barely contain, holds a bucket containing a special blend of feed and molasses and … 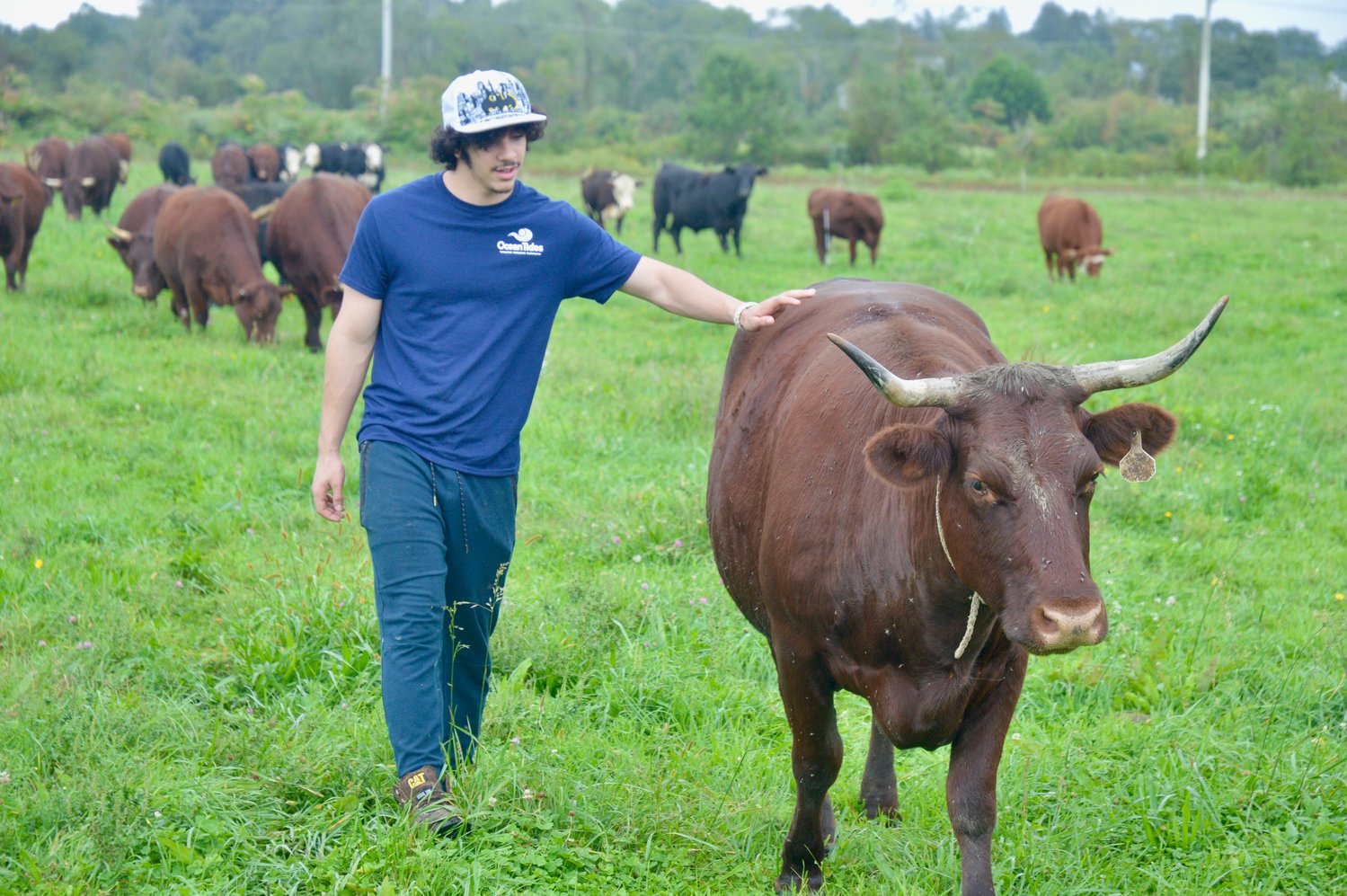 Austin, a student at Ocean Tides School in Narragansett, gains the trust of Fern, the leader of a herd of cattle at Cloverbud Ranch on Jepson Lane. Students visited the farm on seven Wednesday mornings this fall to build communication skills, relationships and trust through bovine therapy.
Jim McGaw 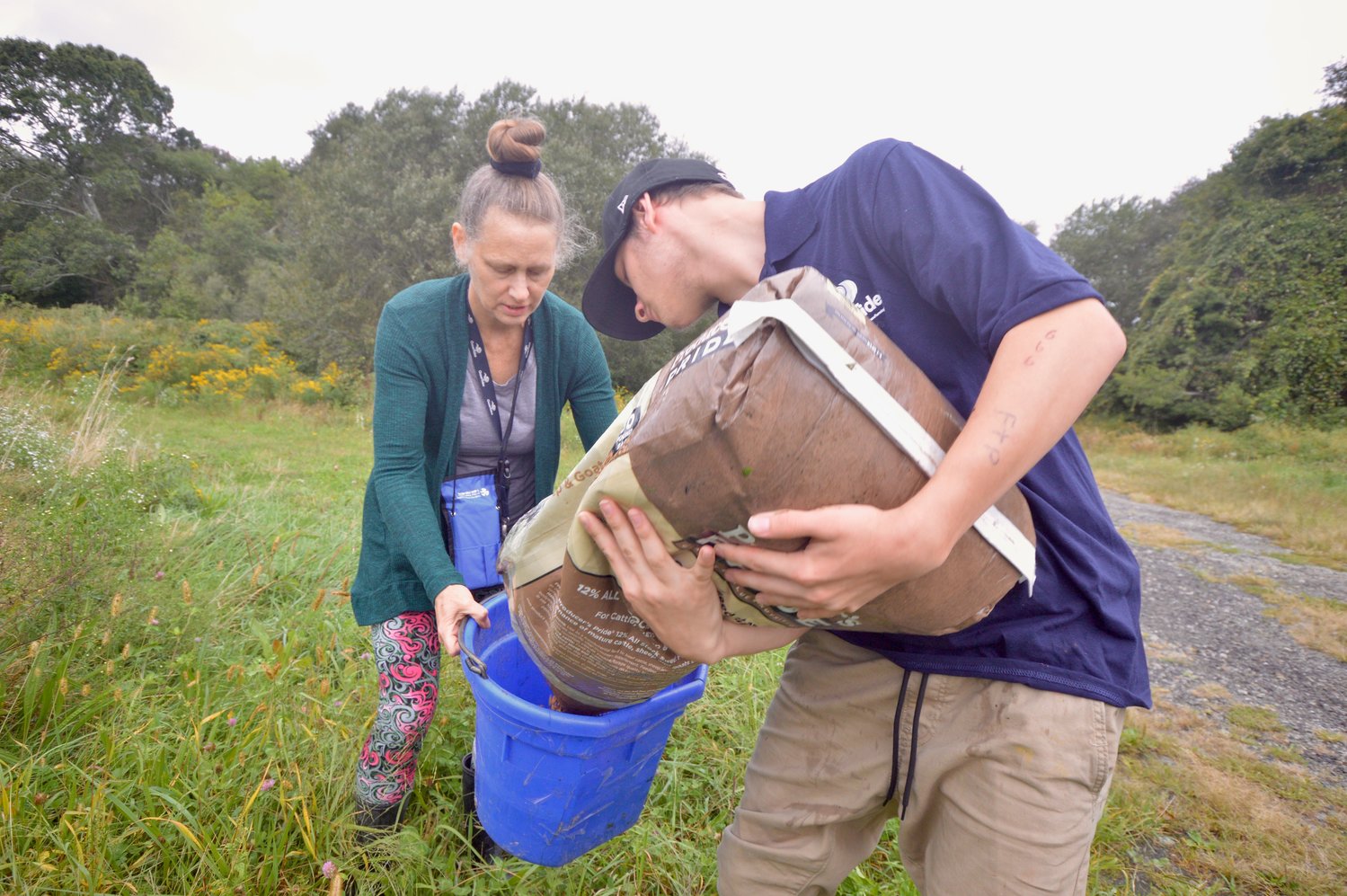 Susan Vogl, director of social services at Ocean Tides School, holds a bucket as one of her students, Chris, pours a mix of feed and molasses to entice the cattle at Cloverbud Ranch.
Jim McGaw 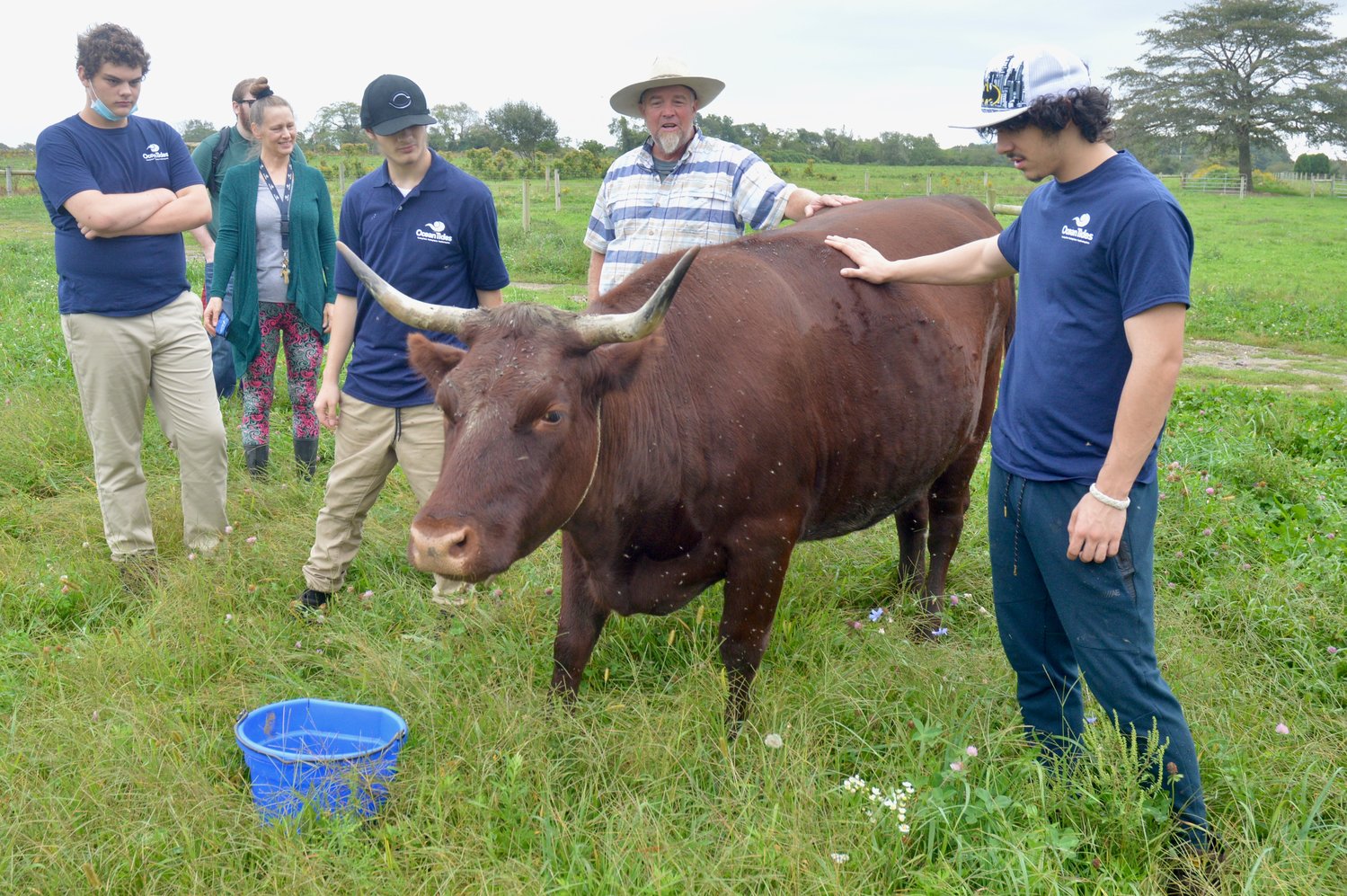 Fern, the herd leader at Cloverbud Ranch, is surrounded by Martin Beck (center) and students and staff from Ocean Tides School.
Jim McGaw 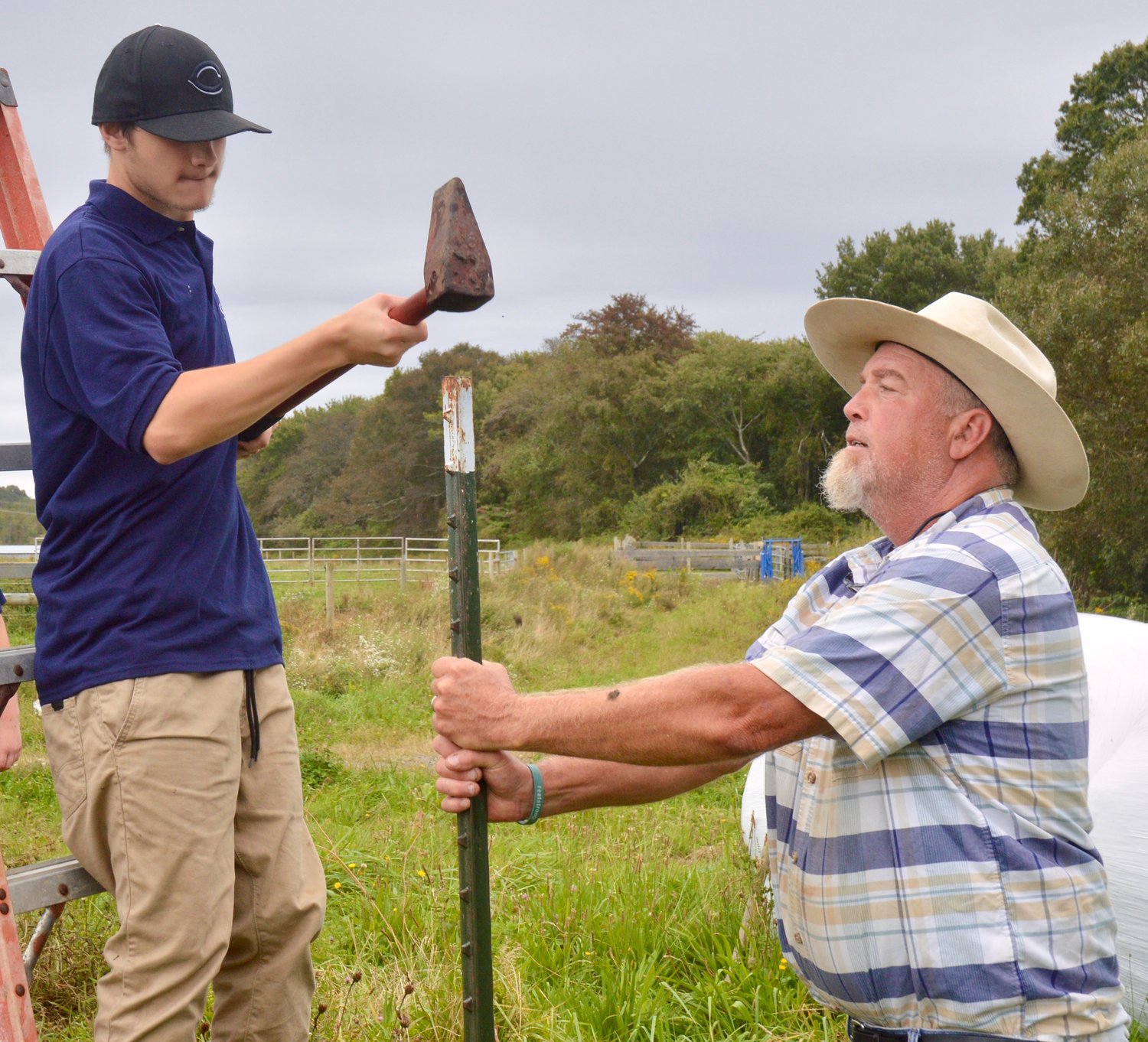 Chris, a student at Ocean Tides School, pounds a fence post which is held by Martin Beck, who operates New England Grass Fed at Cloverbud Ranch. “I’m mindful of that and want to do something that provides a benefit and a blessing to people like these boys, who come from really difficult backgrounds,” Beck said.
Jim McGaw 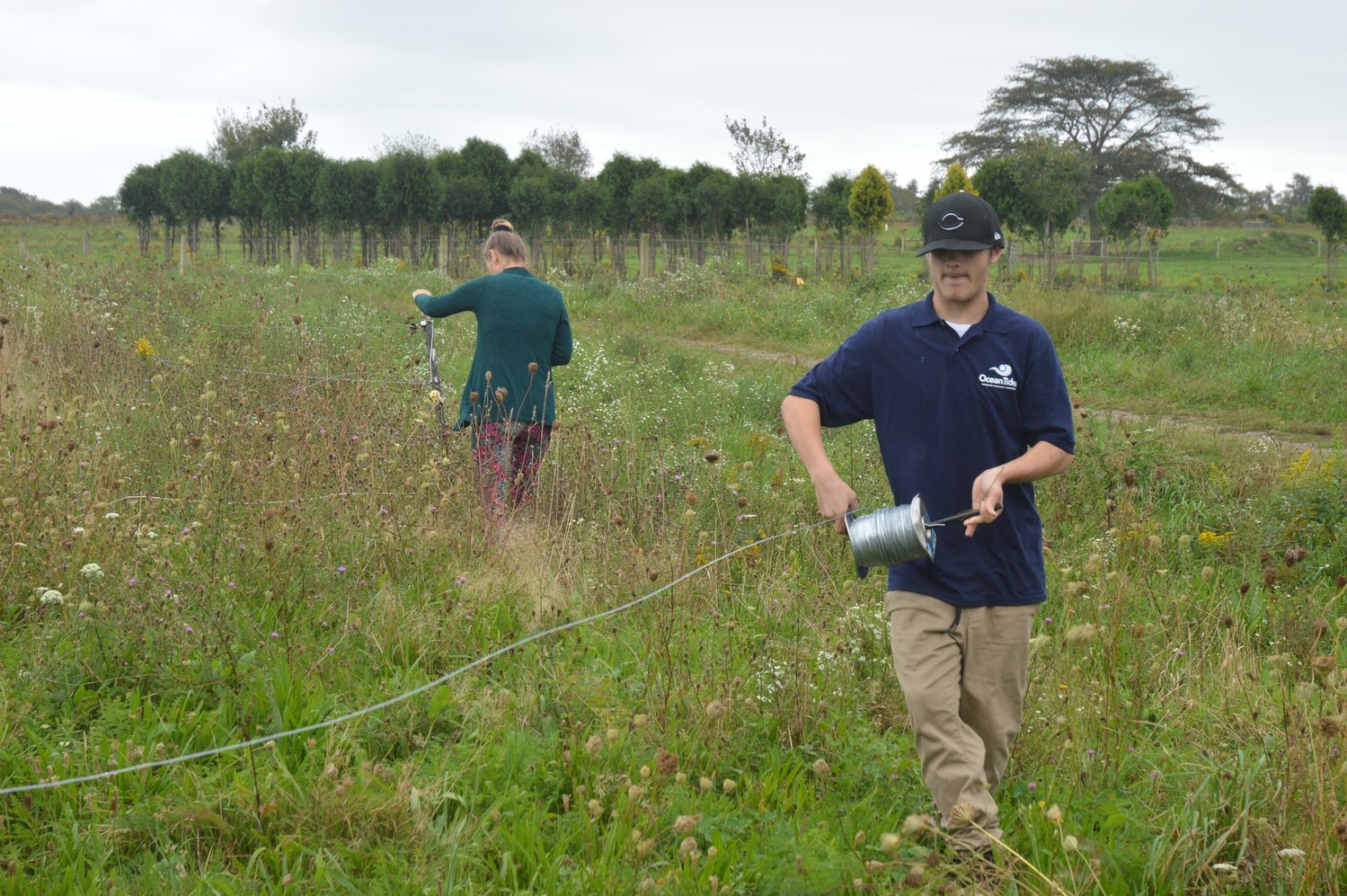 Chris spools some wire that was used to fix one of the fences on the ranch. Susan Vogl is in the background.
Jim McGaw 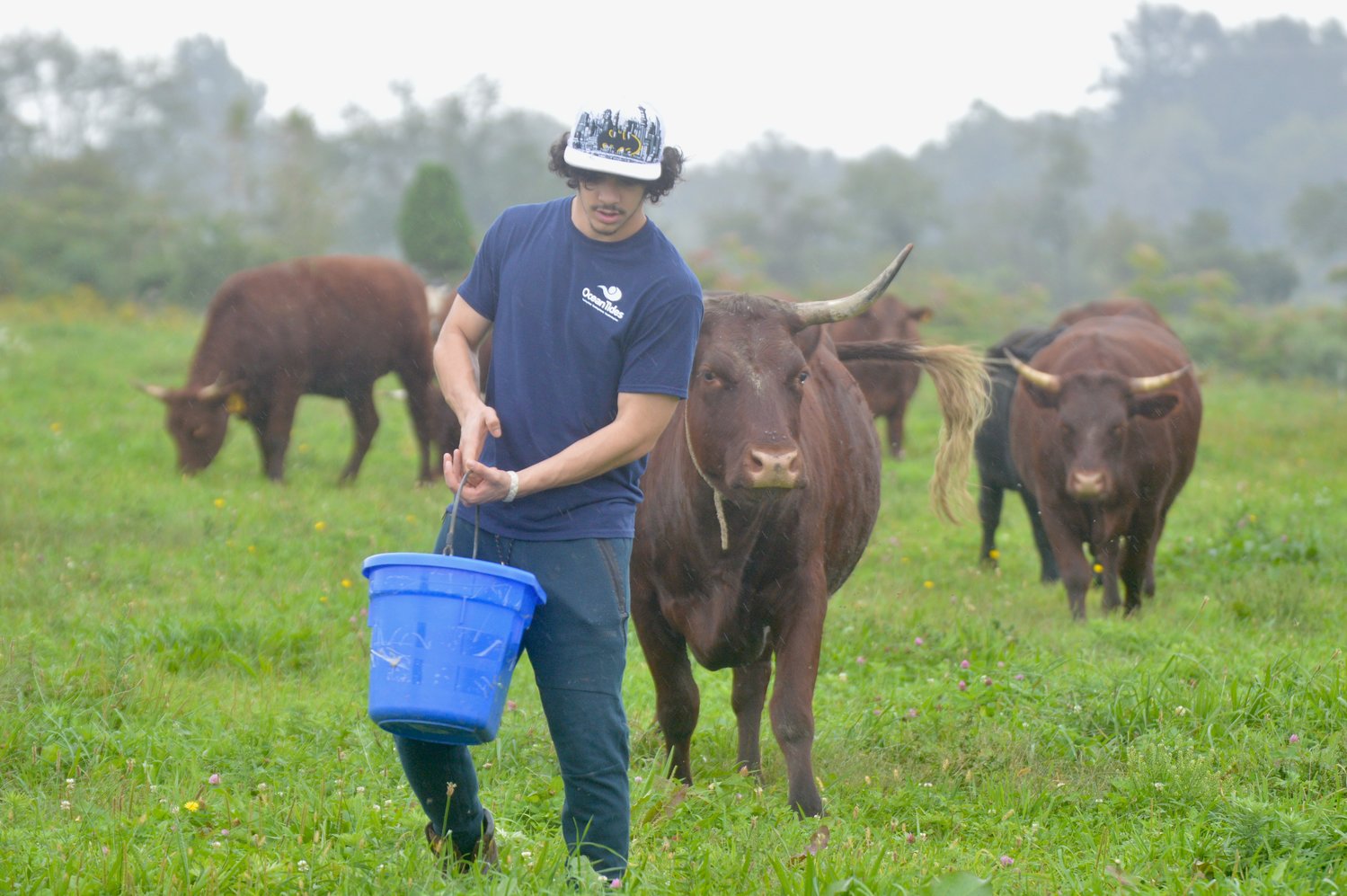 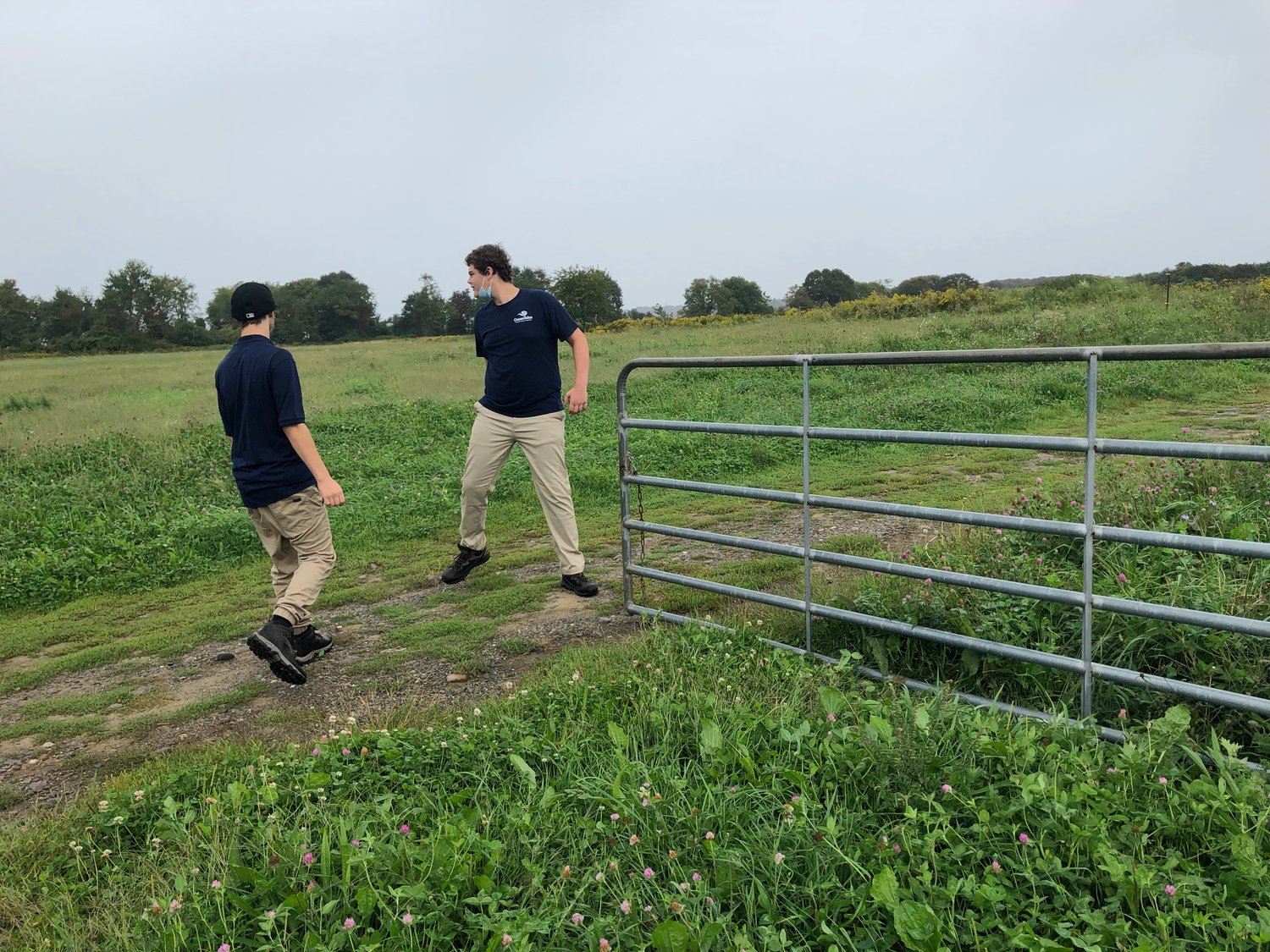 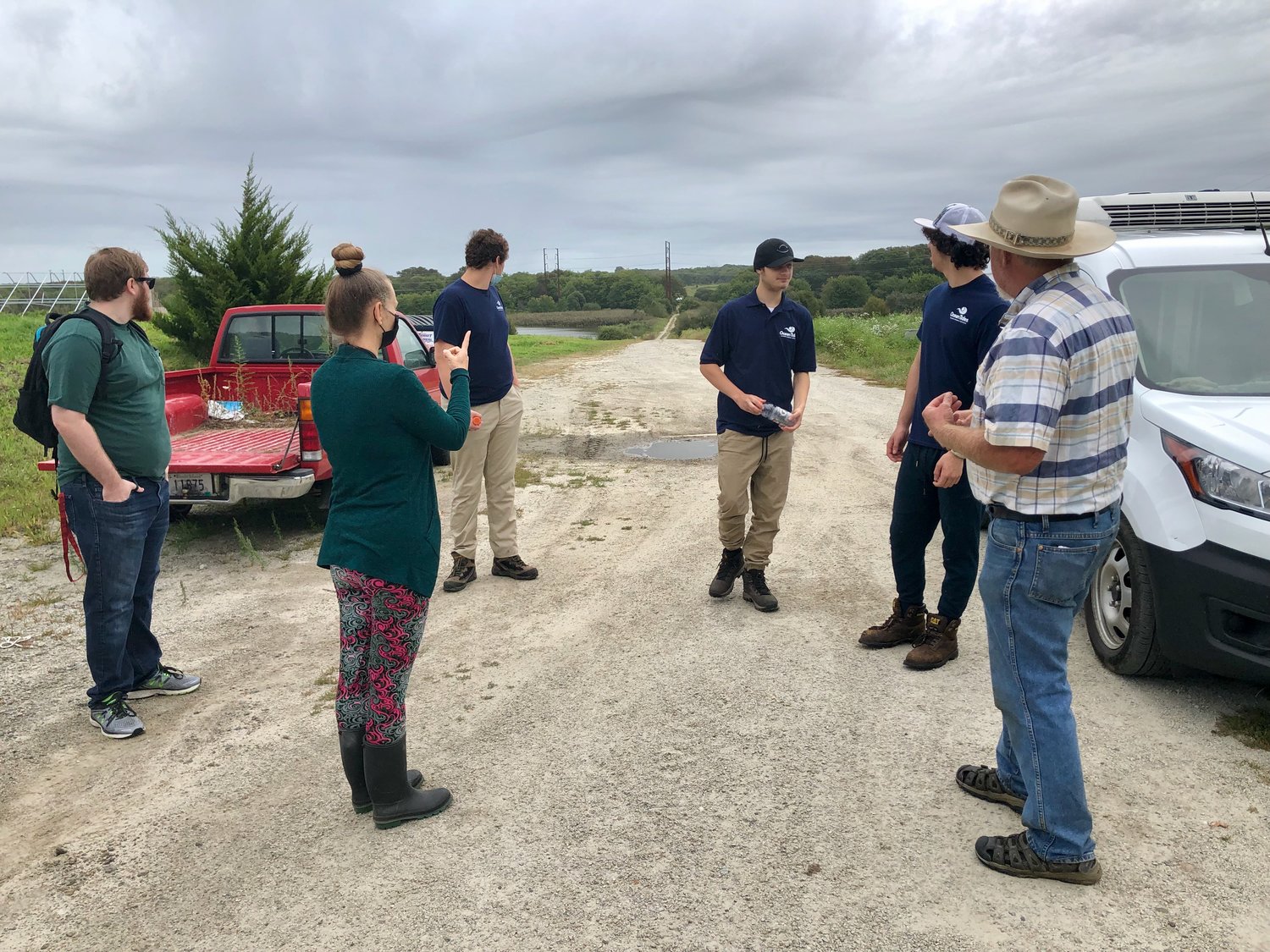 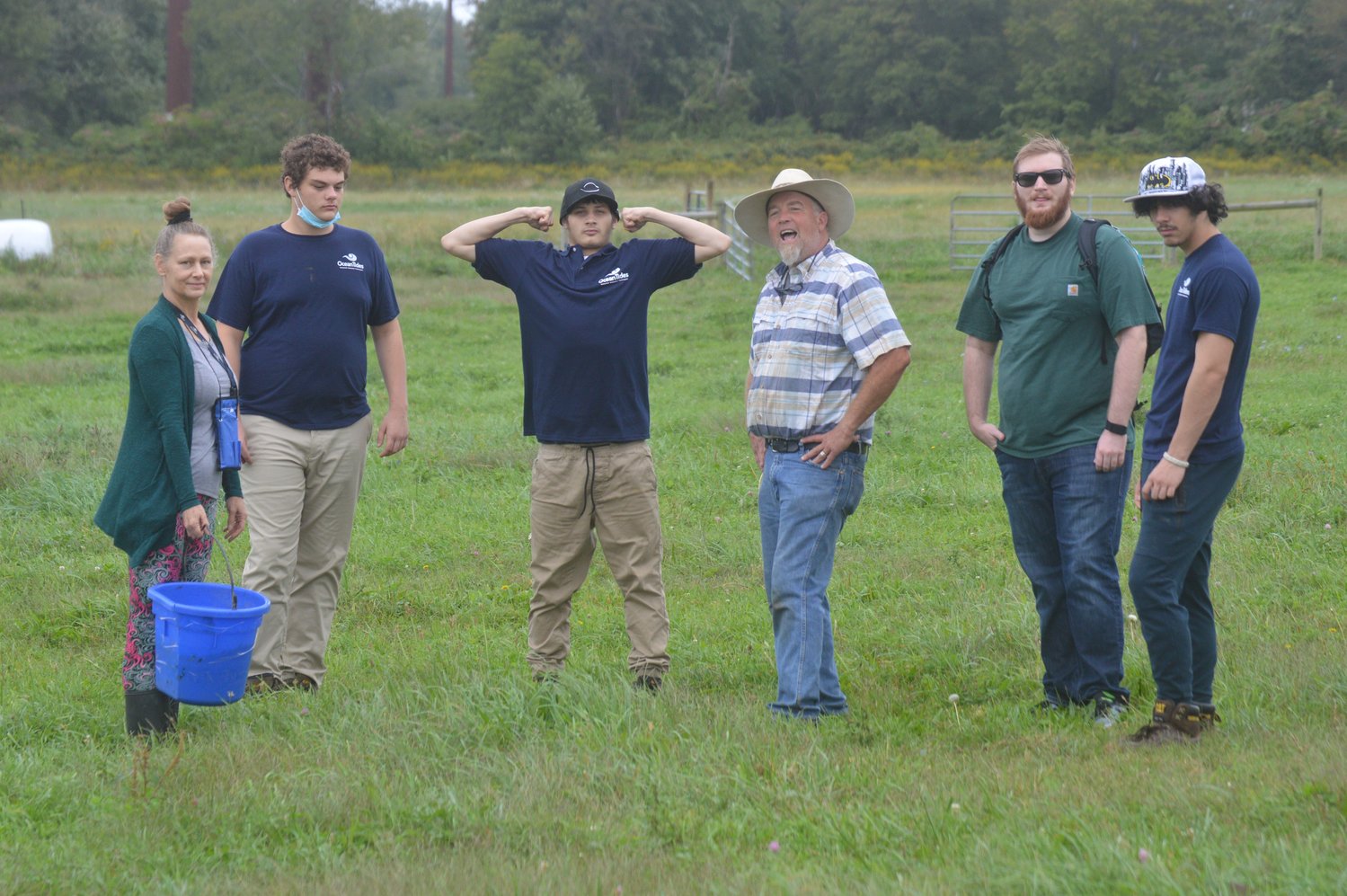 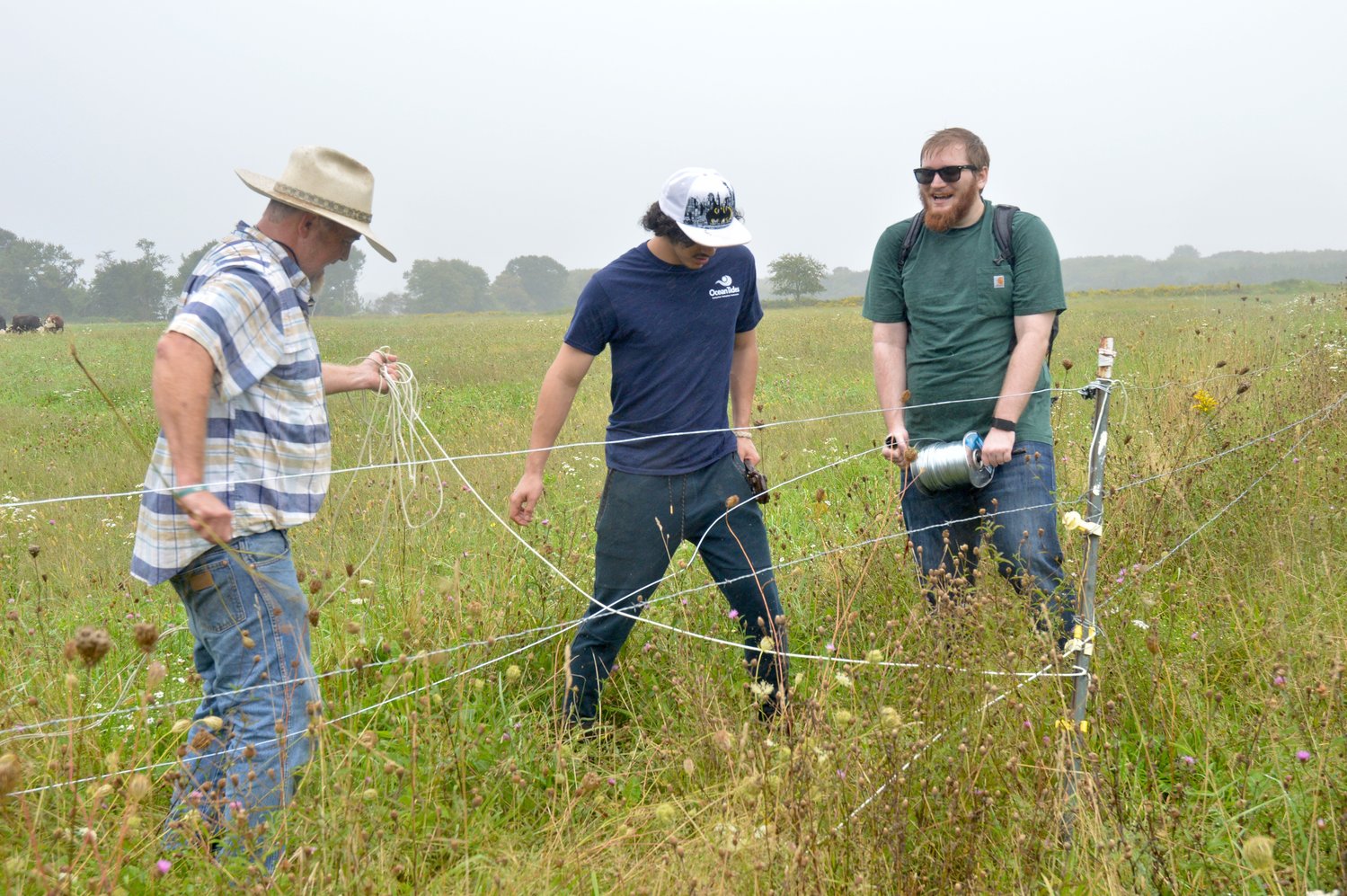 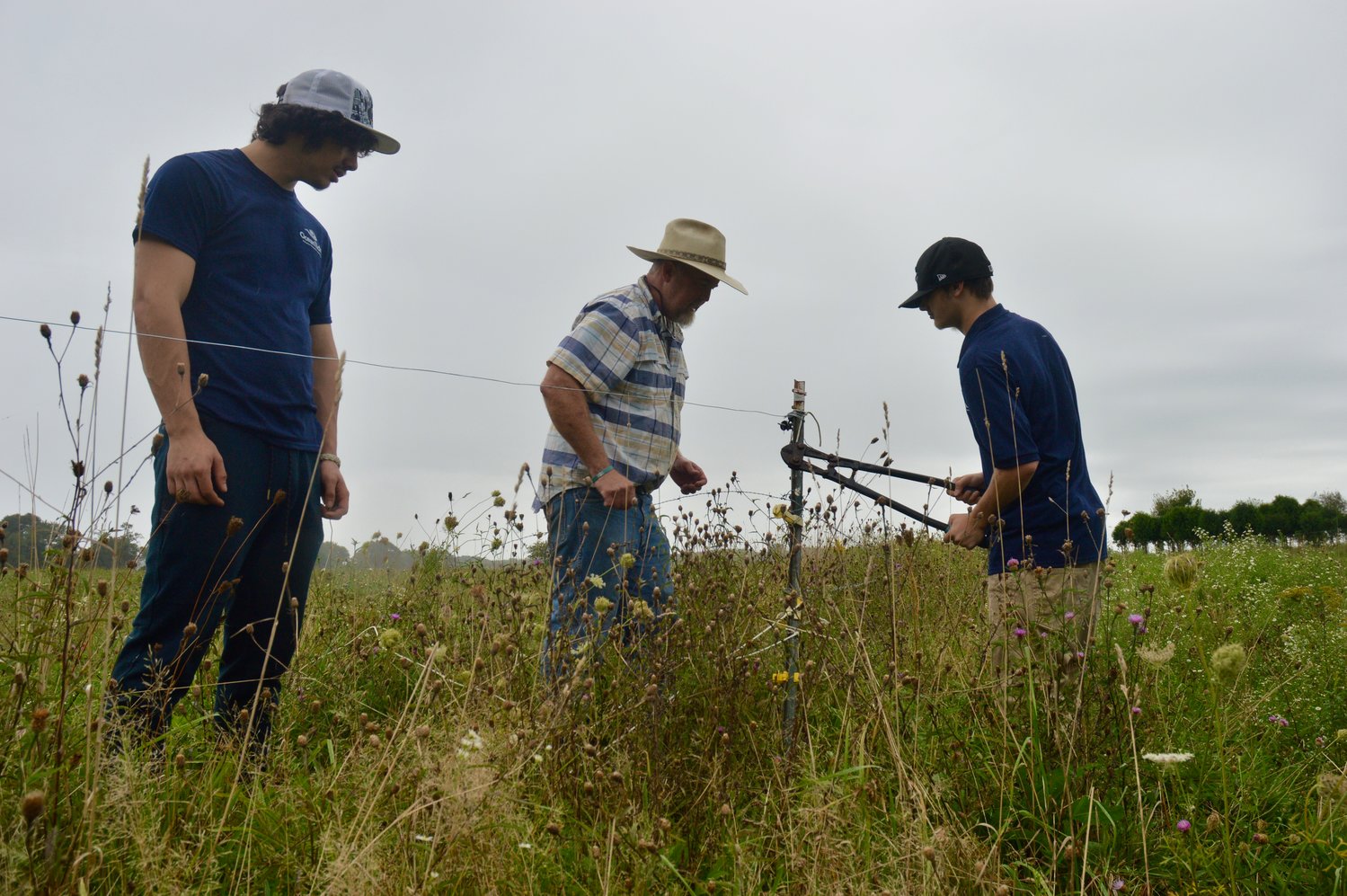 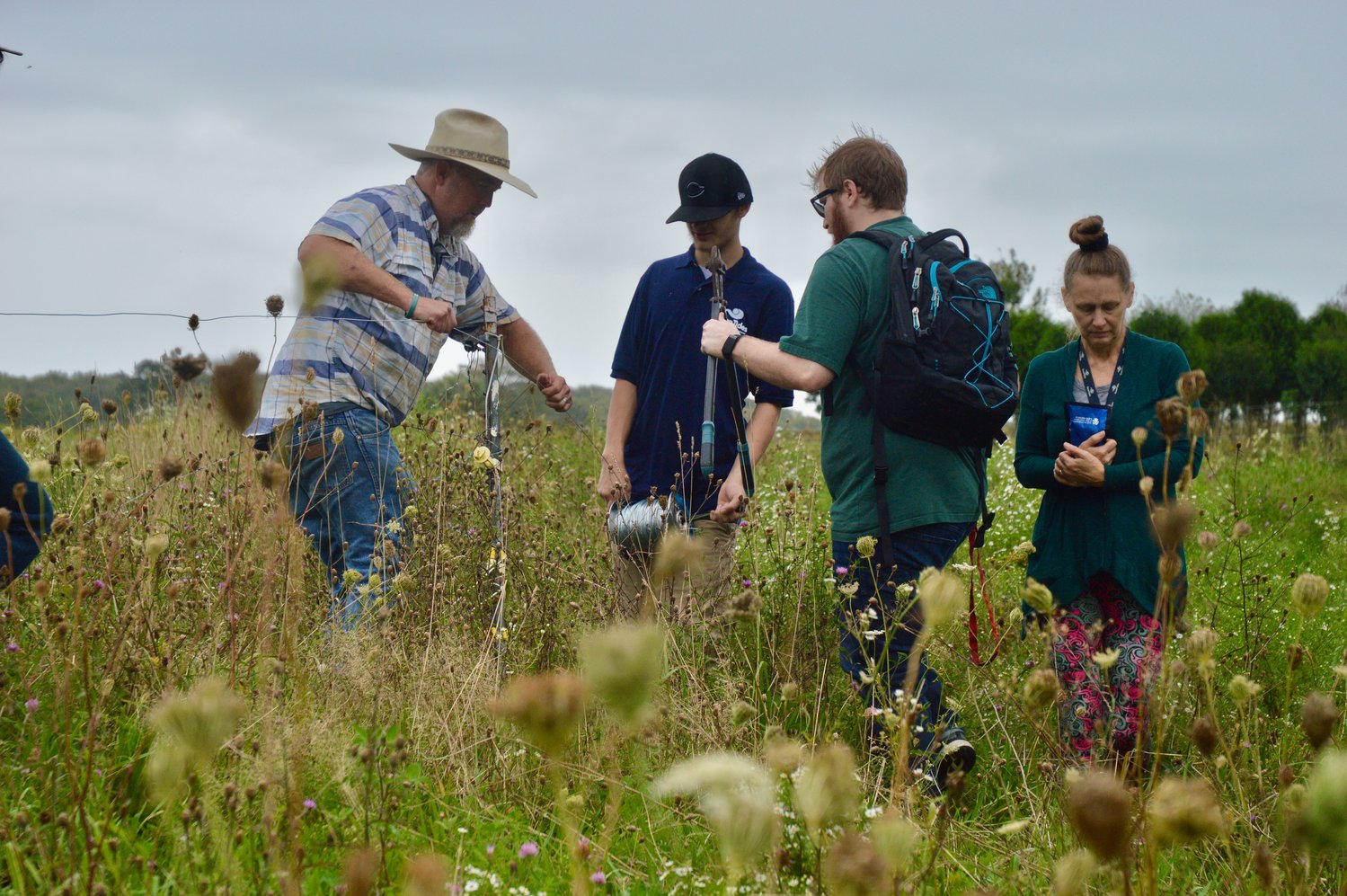 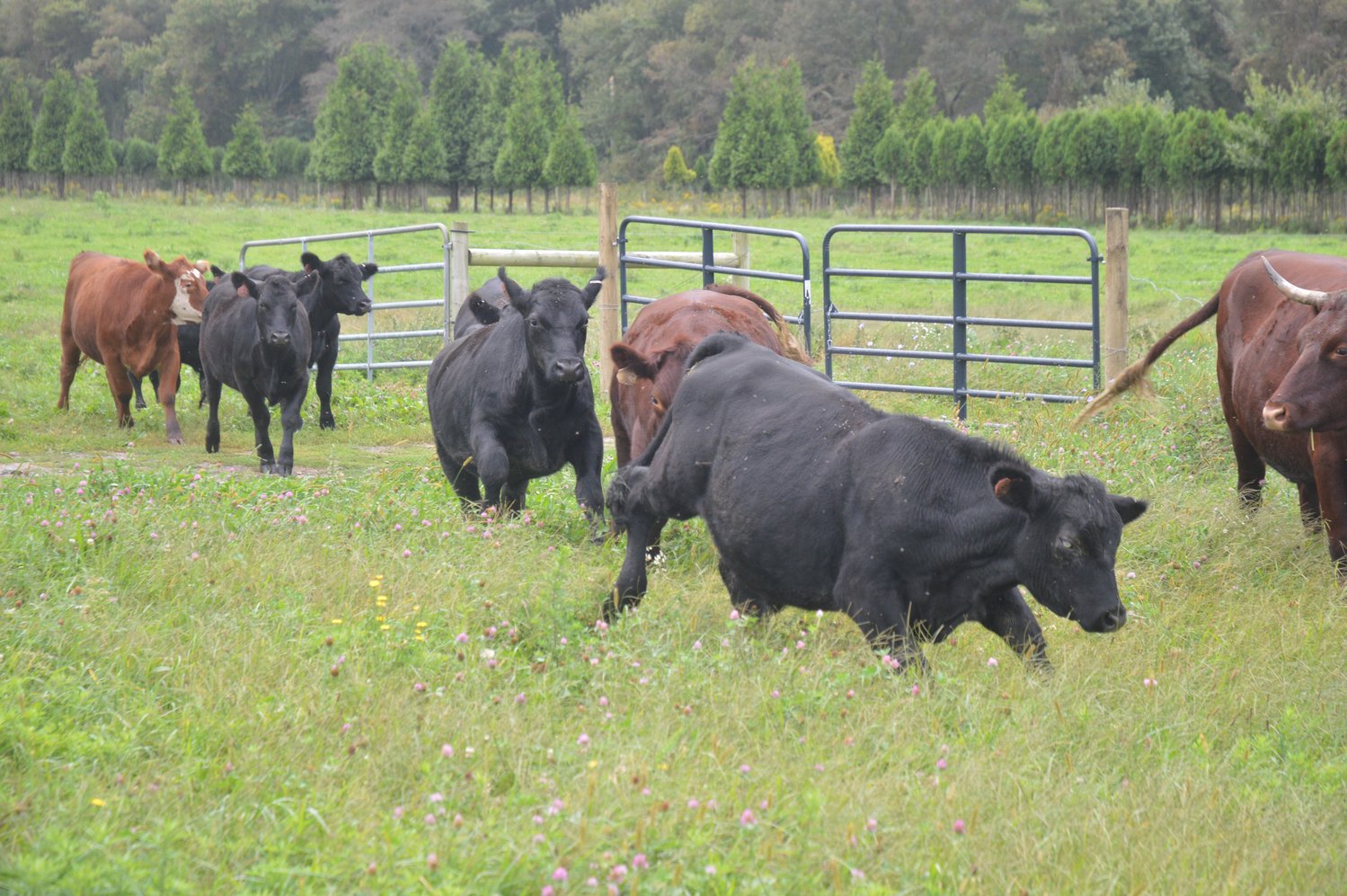 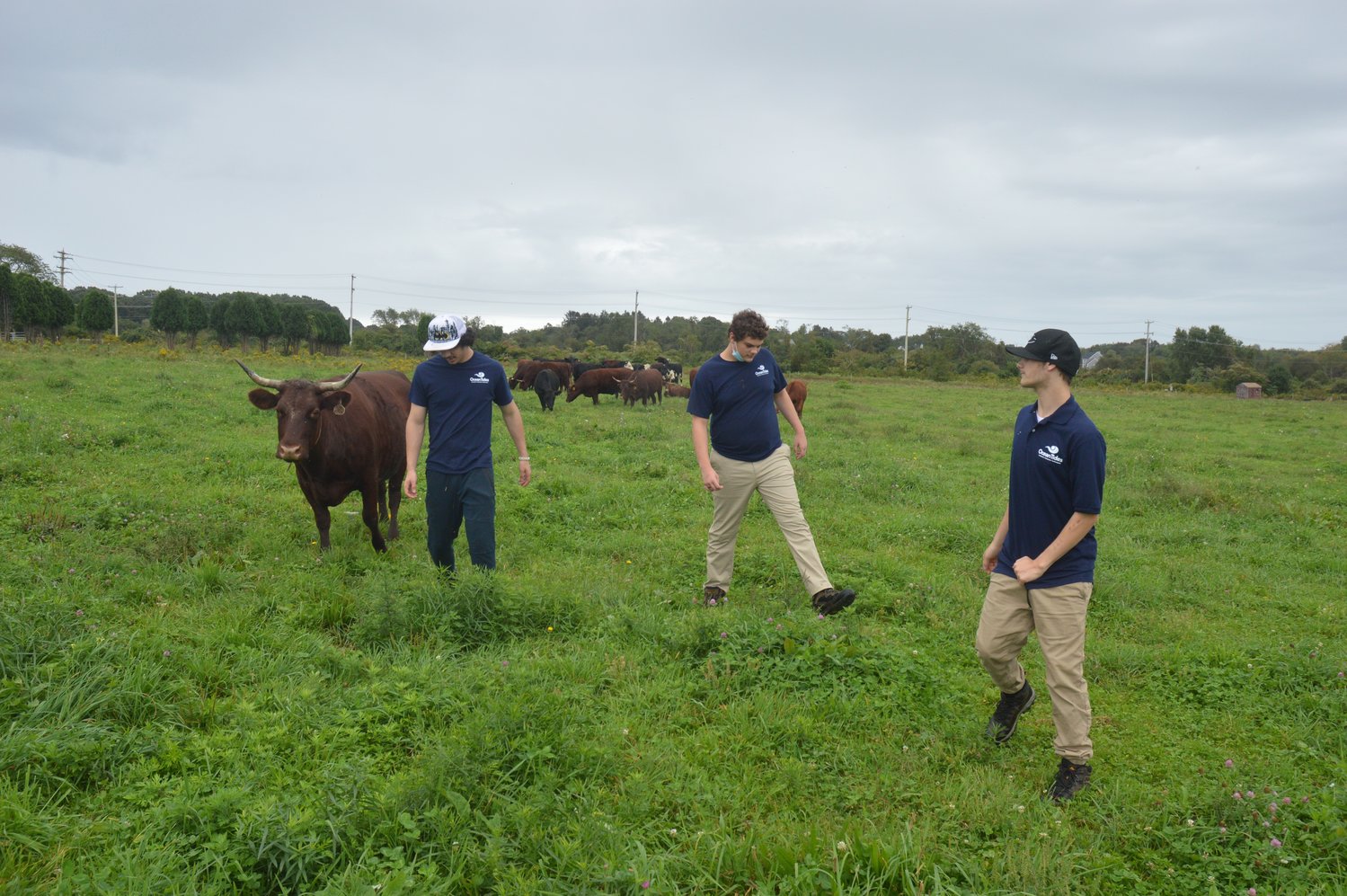 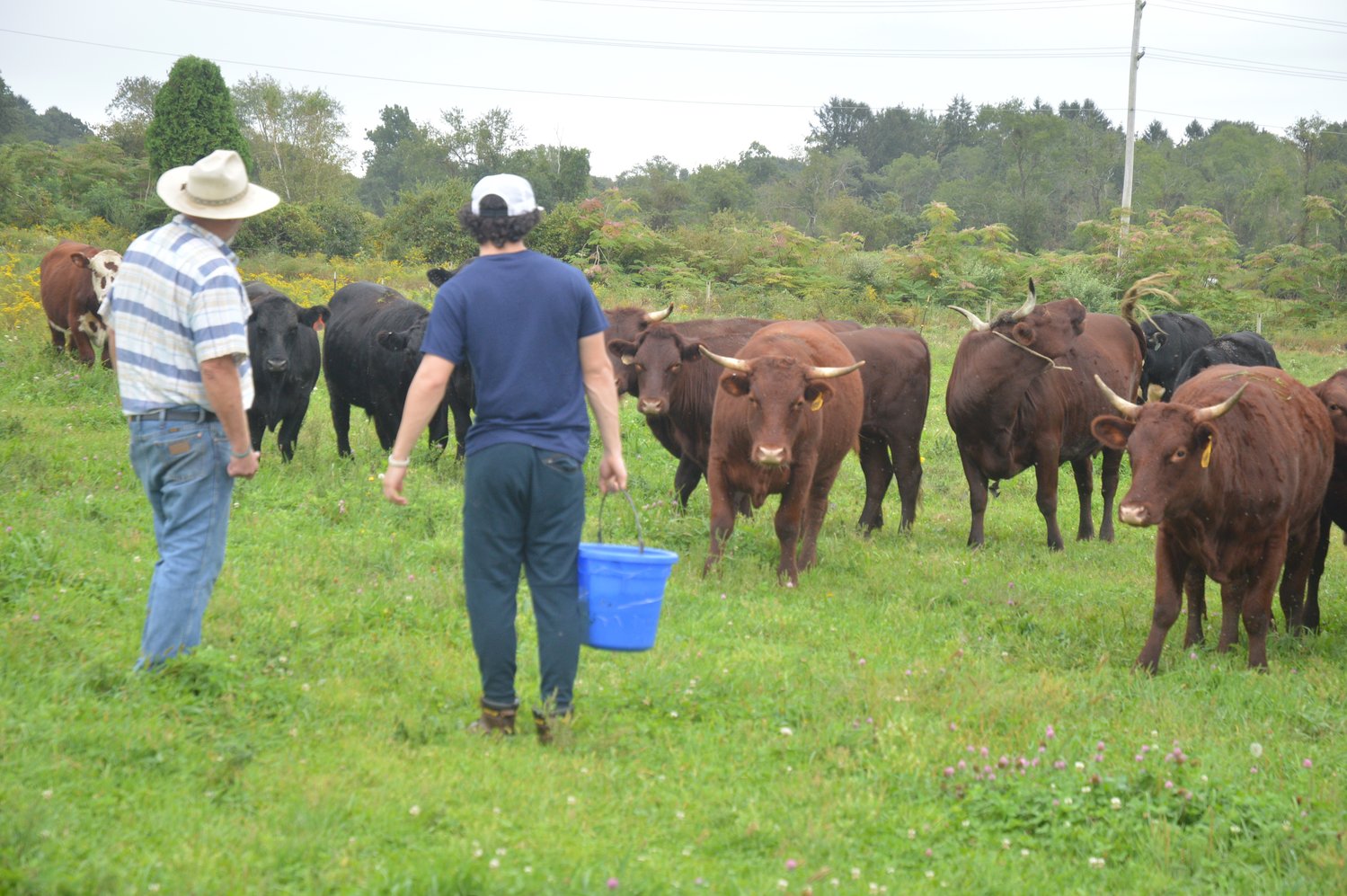 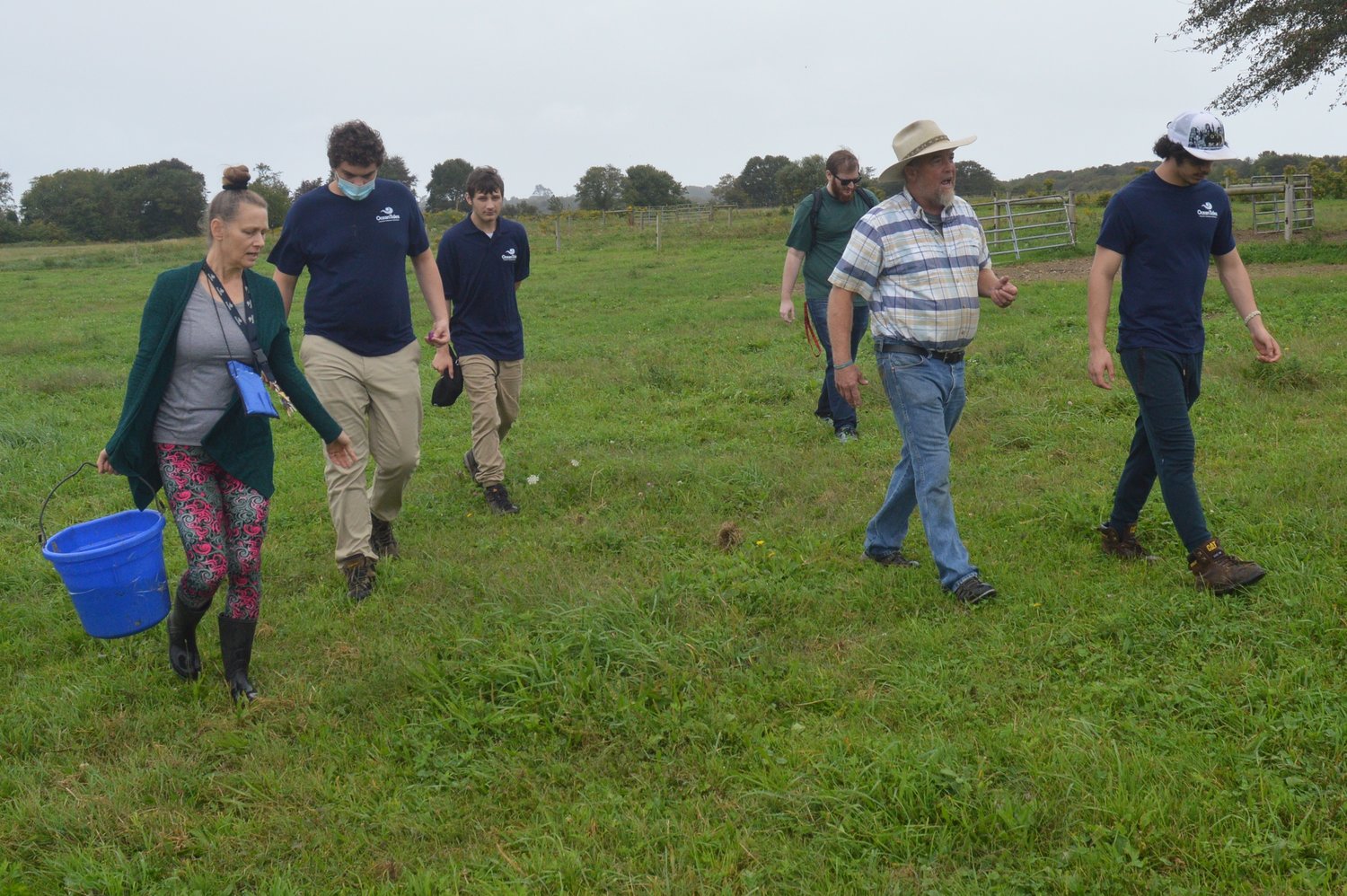 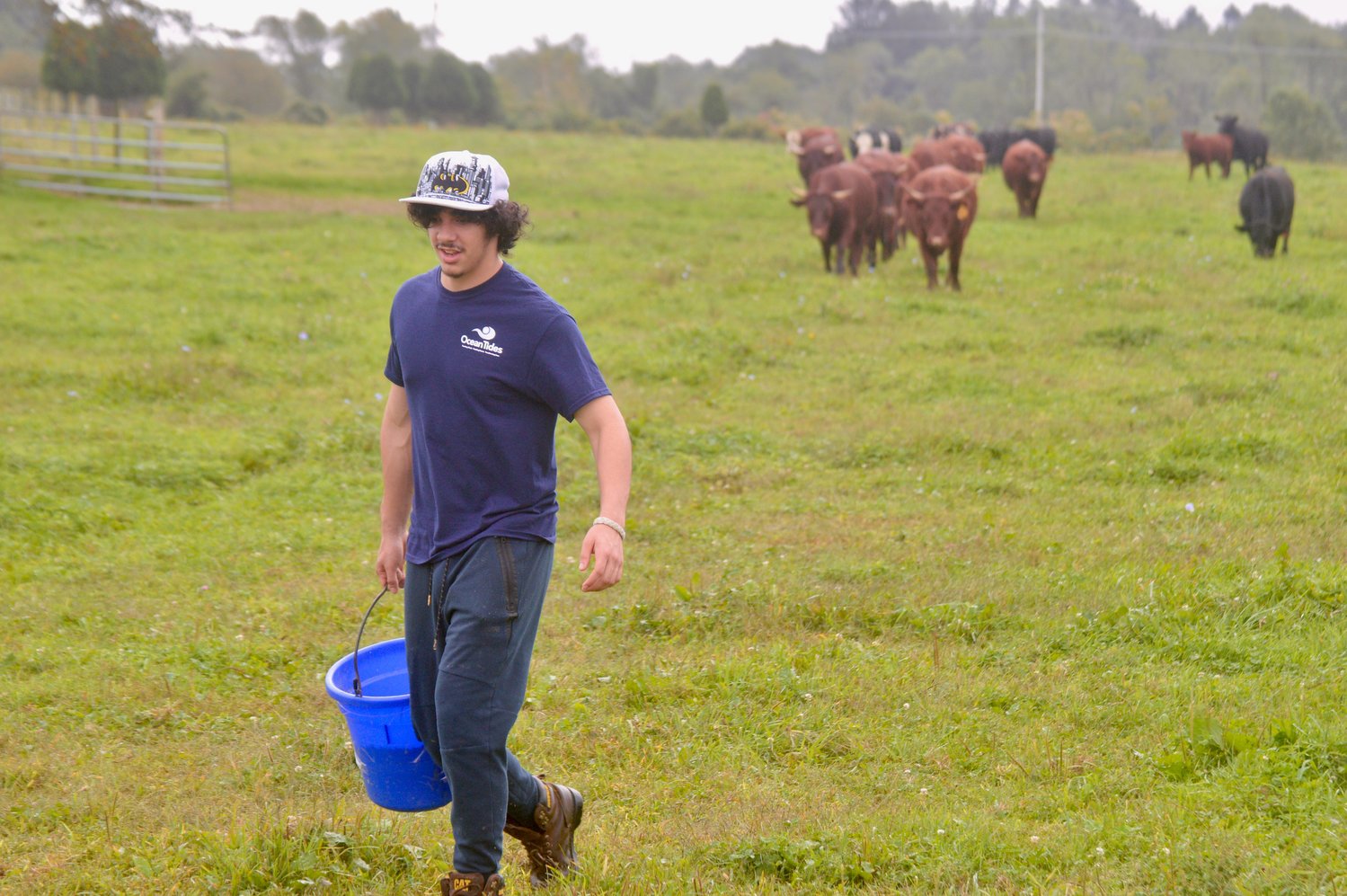 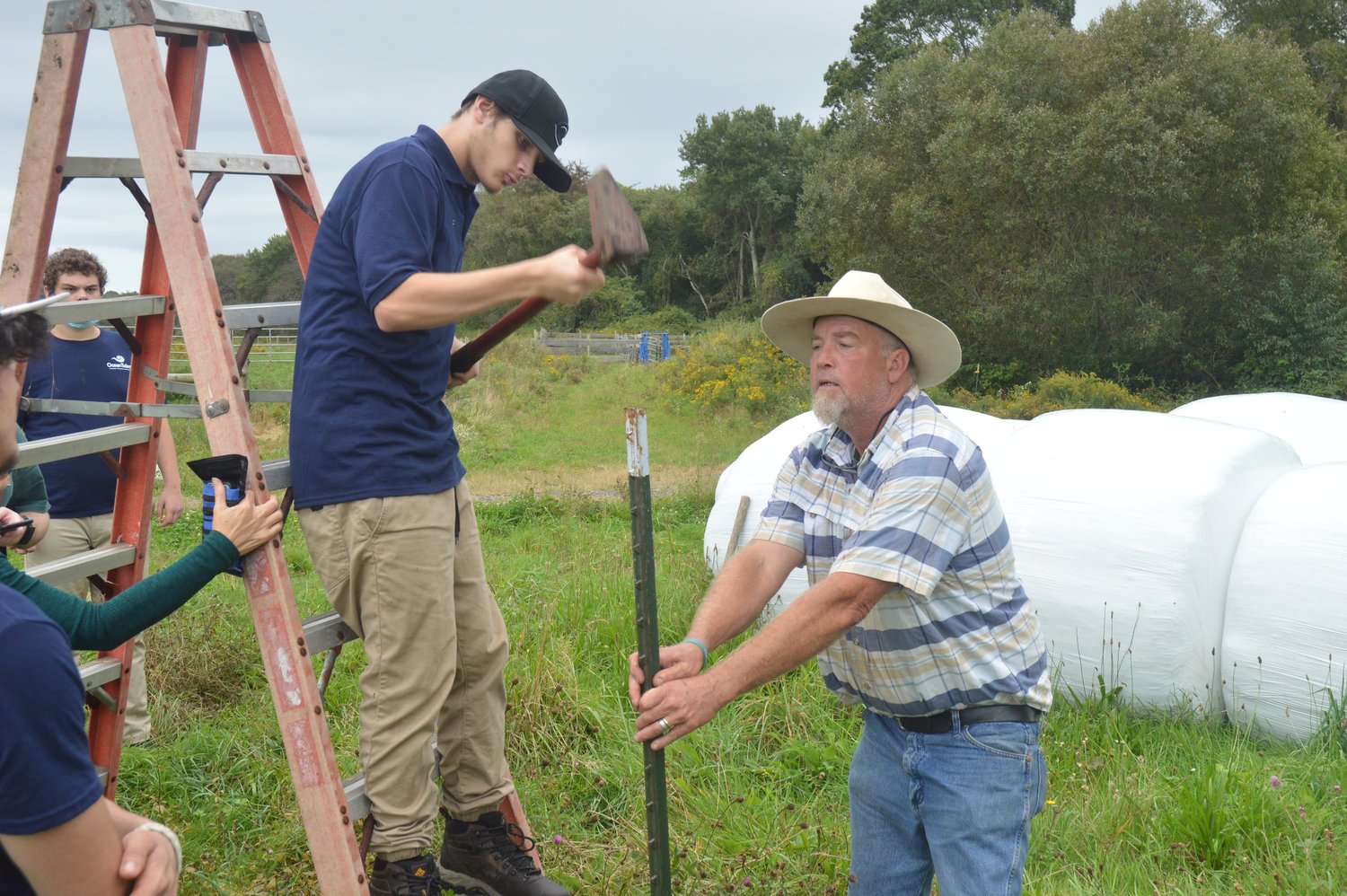 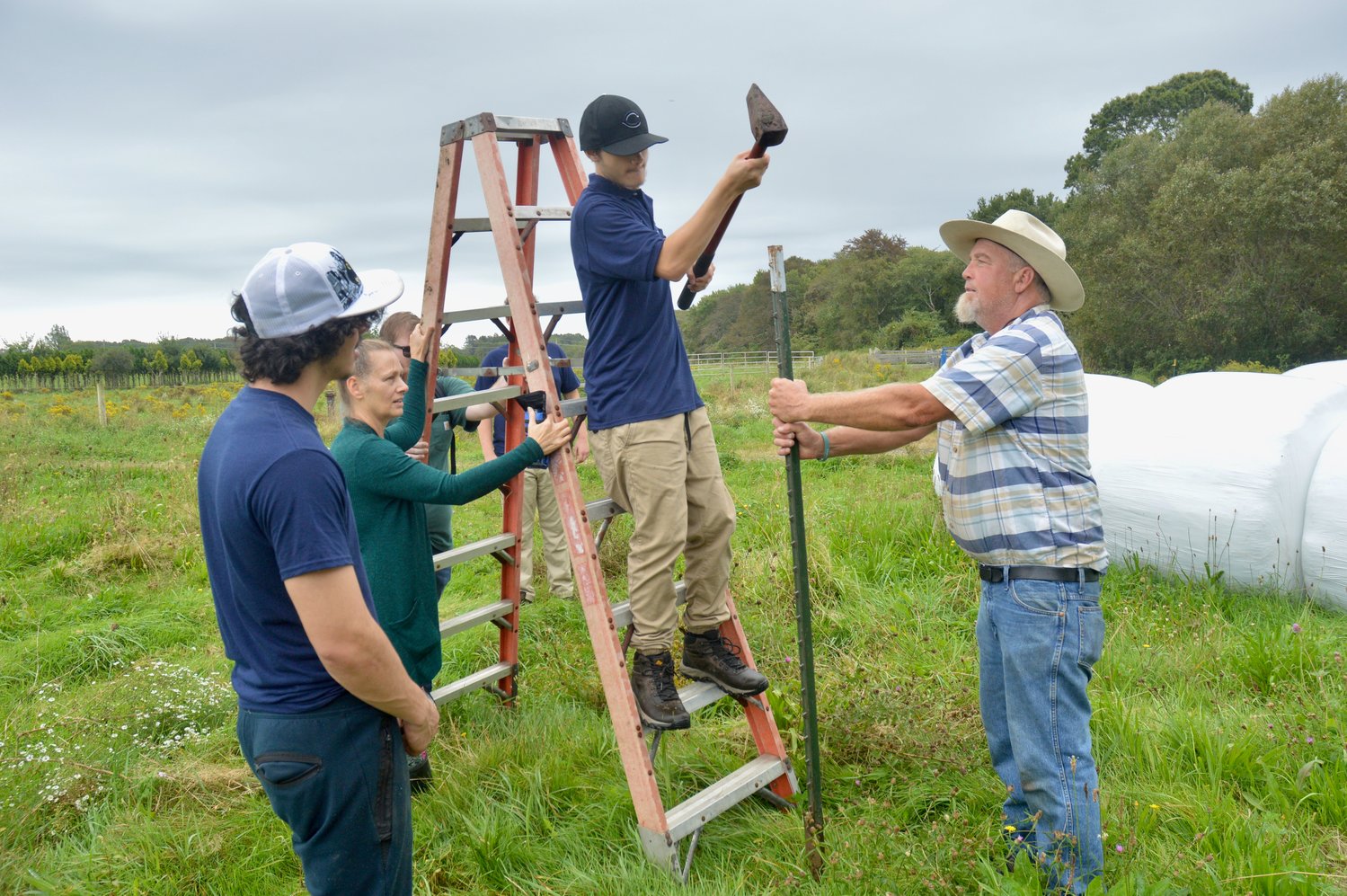 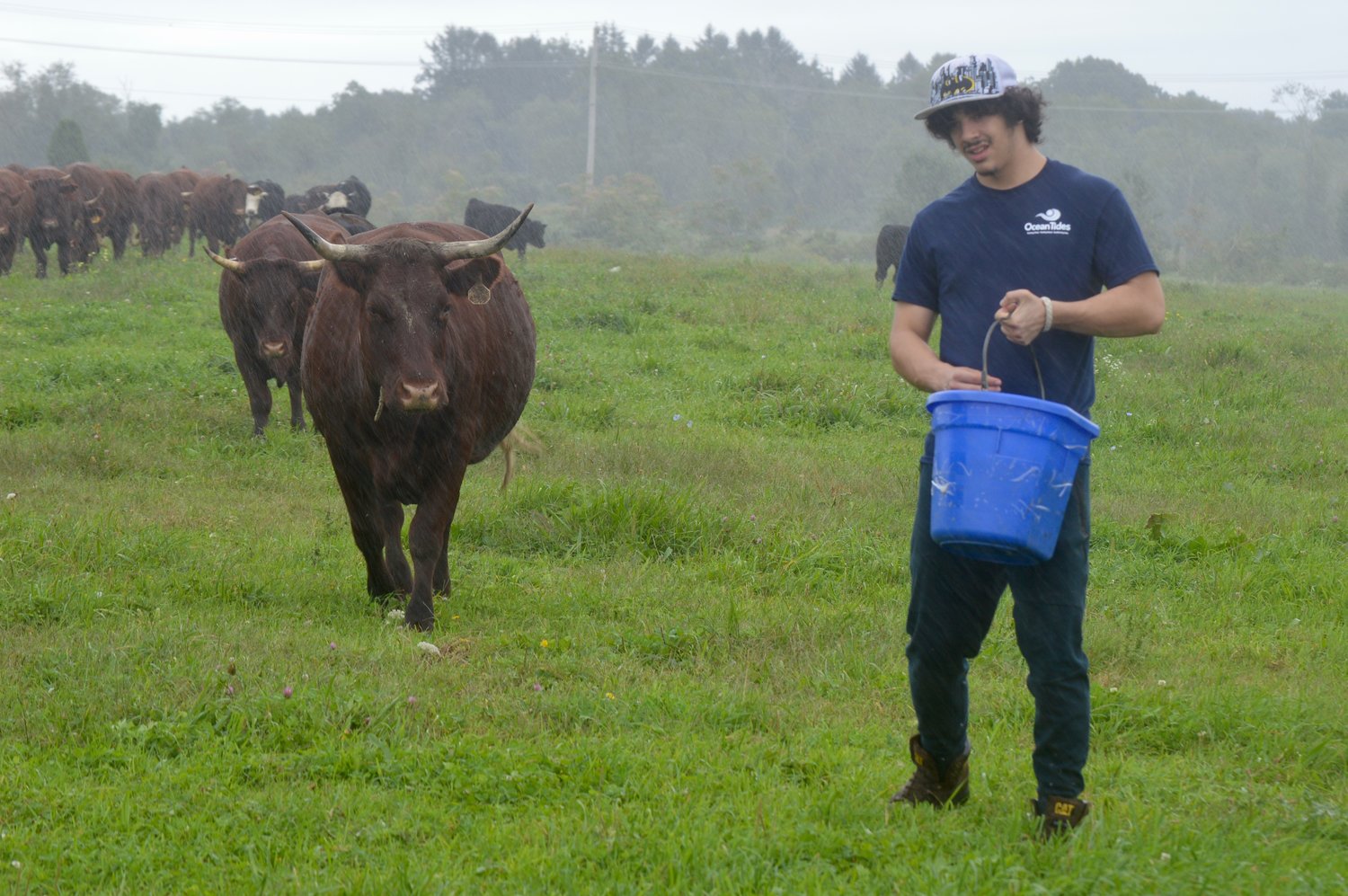 This isn’t exciting like a ropes course. This is more laid back, but they’re learning skills, you’re still doing the teamwork, you’re working on communication, you’re building relationships with strangers.”
Susan Vogl, director of social services at Ocean Tides School
By Jim McGaw

PORTSMOUTH — Austin, a tall teenager sporting a mustache and long curly hair that his Batman cap can barely contain, holds a bucket containing a special blend of feed and molasses and carefully approaches his target.

Inside the bucket is a special treat prepared for the cattle at Martin Beck’s Cloverbud Ranch on Jepson Lane. On one recent drizzly morning, Beck tasked a group of students from the Ocean Tides School in Narragansett to “move the gang” to the fall pasture, where the cows would find long, healthy grass to feast on.

“That left side has had no cows on it for eight weeks, so it’s nice, lush grass,” Beck tells the three students.

Austin’s job is to entice Fern, the herd’s “leader,” to follow him over to the other pasture. If Fern goes with him, the rest of the herd — numbering about 28 in all — will follow.

“If she gets some too early, she might just stop,” Beck advises Austin. “You want them a little hungry so they follow, and when they get to the destination, we can reward them. We don’t push the cows; we try to make them think it’s their idea.”

Austin follows along, giving the bucket a shake as he cautiously approaches. Eventually, he earns Fern’s trust, and she and the rest of the gang head through a swinging fence and into the greener pasture, where they prance around like kids in a candy store. As they play, the smiling students gather around Fern as she sticks her snout inside the bucket. Mission accomplished.

Most people are familiar with equine therapy, in which people engage in a range of treatments involving activities with horses to promote physical and mental health. There are several such programs in the East Bay, in fact.

This is something similar, but involves cows rather than horses: Bovine therapy. While horses are often used in one-on-one therapy, cattle is ideal for working with groups, Beck said.

“They see it as a function of the herd. We all need a group; we all need allies, and there’s a leader,” he said, adding that it’s about building trust and improving communication skills. “Equine therapy’s gotten a lot of attention, and I have a personal axe to grind because I’ve been poo-poohed by some people.”

The students are from Ocean Tides in Narragansett, a Christian Brothers school which serves teenagers coming from troubled backgrounds and display a spectrum of behavioral challenges that have caused them to be removed from a traditional scholastic environment.

“I’ve been wanting to launch a bovine therapy program for a long time,” said Beck, who operates New England Grass Fed LLC, which raises cattle for grass-fed beef at Cloverbud Ranch. “My dad was a large-animal veterinarian, and we lost him last year at the age of 89. He had a great long life, and really demonstrated care for the community his entire life; he donated his care to the local animal shelter for 20 years in New York. I’m mindful of that and want to do something that provides a benefit and a blessing to people like these boys, who come from really difficult backgrounds.”

Beck delivers his grass-fed beef to a restaurant along the wharf in Newport, where he’s friendly with the bartender. He learned that his friend’s wife, Susan Vogl, is a clinical social worker and director of social services at Ocean Tides.

“This is probably the fifth person I had reached out to, and this one worked,” he said.

The school already had experience with animal therapy, since students had worked with horses. Vogl and her husband even have therapy dogs at home, “so the animal connection was there,” Beck said.

Vogl agreed that Beck’s mission, and Cloverbud, was a good match for some of her students.

“Christian Brothers’ values are really about the least, the last, the lost through education, taking people who are impoverished — physically, emotionally, spiritually — and raising them up,” she said. “We are juvenile justice; we are a residential male adolescent facility, ages 13 to 18. We take kids in, get them educated, get them feeling better about themselves. We work with the families through individual counseling, group counseling, pet therapy, anger management, substance abuse treatment, equine therapy, ropes course, yoga and meditation. We’re really exposing them to new coping skills. Our model is really based on relational therapy.”

The average stay at Ocean Tides, which has a capacity of 36 students, is nine months. About a third of the students have been sentenced to the Rhode Island Training School, “but they’re serving their time with us,” Vogl said.

Another third are “drug court kids,” while the remaining third are teens in the Family Service Units division of the R.I. Department of Children, Youth & Families.

Vogl started bringing three boys, ages 15 to 17, to Cloverbud in September. “These kids I chose because they live in more rural areas, so I figured the first time around they might actually have the ability to work on a farm,” she said, adding that next time she might bring inner-city kids here to expose them to what working on a ranch is like.

At first a couple of the boys were scared of the cows, but they learned how to work through that. It’s part of the therapy.

“Once, the cattle surrounded them, which made them a little nervous. ‘Oh, they’re after us,’ they said. I said, ‘No, they’re comfortable; they’re spread out,’” Vogl said. “We learned how the cows communicate. When they’re all herded together they’re a little nervous; when they’re spread out they’re more relaxed. So learning to read their language, they learn to read each other; there’s that non-verbal communication.”

She also believed the students would learn to be more patient, to step out of their comfort zone and try something new, and to trust.

“This isn’t exciting like a ropes course. This is more laid back, but they’re learning skills, you’re still doing the teamwork, you’re working on communication, you’re building relationships with strangers,” she said.

Many of the school’s students look down on themselves, Vogl said. “To try something new and be successful is so rewarding,” she said. “We focus on what they’re doing right. And, how many people can say they’ve touched a cow?”

Beck said it was important for the teenagers to build trust with him, too. During their first visit to the ranch, one of the boys, Chris, interrupted Beck on occasion. (While we were allowed to photograph the three students, The Portsmouth Times was permitted to use only the first names for two of them.)

“I spoke rather sharply to him, and I feel I owe him an apology,” Beck said just before Vogl arrived with the students for their second Wednesday visit. And, after greeting the group at the top of the ranch, that’s exactly what he did. Chris seemed surprised, and he flashed a shy smile.

After that piece of business was finished, they all walked down the sloping ranch that’s near St. Mary’s Pond, with Beck explaining what goes into running the place. After moving the cattle over, Beck got Chris and Austin to help him fix part of a fence — one that can be electrified if needed.

The third student wasn’t as engaged as Chris and Austin during a reporter’s visit, and after the rain picked up a little, he insisted on going back to the van to get dry. Working outdoors in the elements isn’t for everyone.

“We’re an hour away, so we have all that time on the way back to process things,” Vogl said, noting that sometimes, the boys indicate they don’t want to go back.

Austin, the boy who got Fern to follow him, appeared to be the most outgoing student. He had his hands in everything and was eager to learn more.

“I used to work on a farm, so I’ve done this before,” Austin said as he helped fix a section of fencing.

“This is his element; he’s an outdoor kid,” Vogl said. “Maybe he strikes up a relationship with Martin.”

Sure enough, on the walk back to the van at the top of the ranch, Beck starts up a conversation with Austin, telling him he admired his work ethic. Maybe he could work on the ranch some day — camp out and be the herd leader.

“I could get you a bike. You could live here, take care of the herd. I could feed you,” Beck tells him.

For Beck, it’s important to use Cloverbud as a means of giving back.

“I was given so many opportunities,” he said. “There were the Scouts, music lessons, fishing trips, nature.”

Not everyone is so lucky.

“Many of these kids are coming from foster situations, from bad environments. They aren’t allowed to be in regular school,” he said. “I always talk about what we do at the farm and maybe let that represent a parallel to something that could be a successful application in their lives.”