‘Doing a good deed is part of who you are’

PORTSMOUTH — For the longest time, Maria Takacs said she’s always felt she was in this world for something “more than yours truly.”

Her passion for community service …

‘Doing a good deed is part of who you are’ 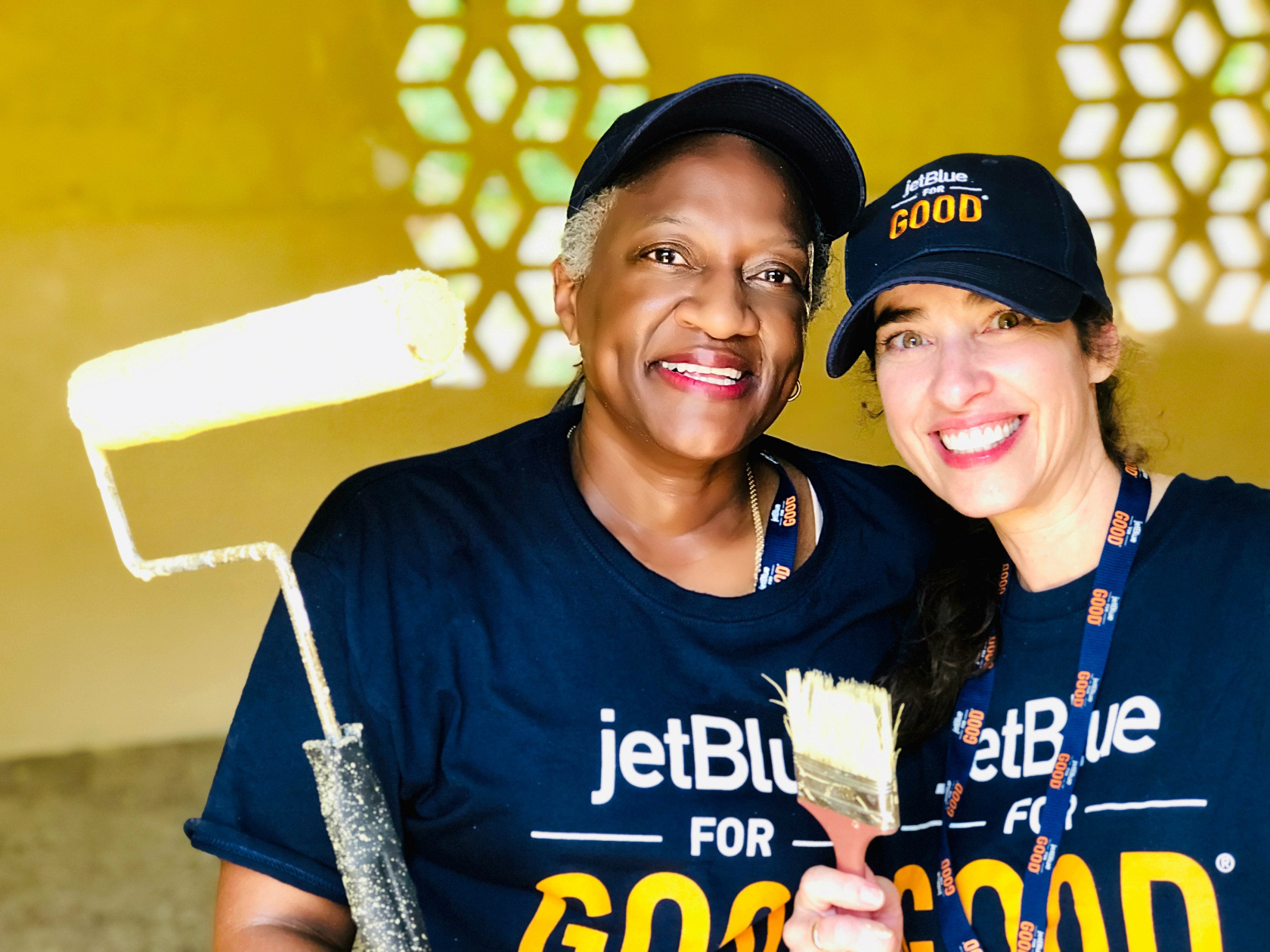 Mattie Kemp (left) and Maria Takacs of Pennfield School take a quick break for a photo while painting the interior of a classroom in the Dominican Republic. Ms. Takacs won a service trip through a JetBlue for Good essay contest, and took Ms. Kemp along with her.
Courtesy of Maria Takacs 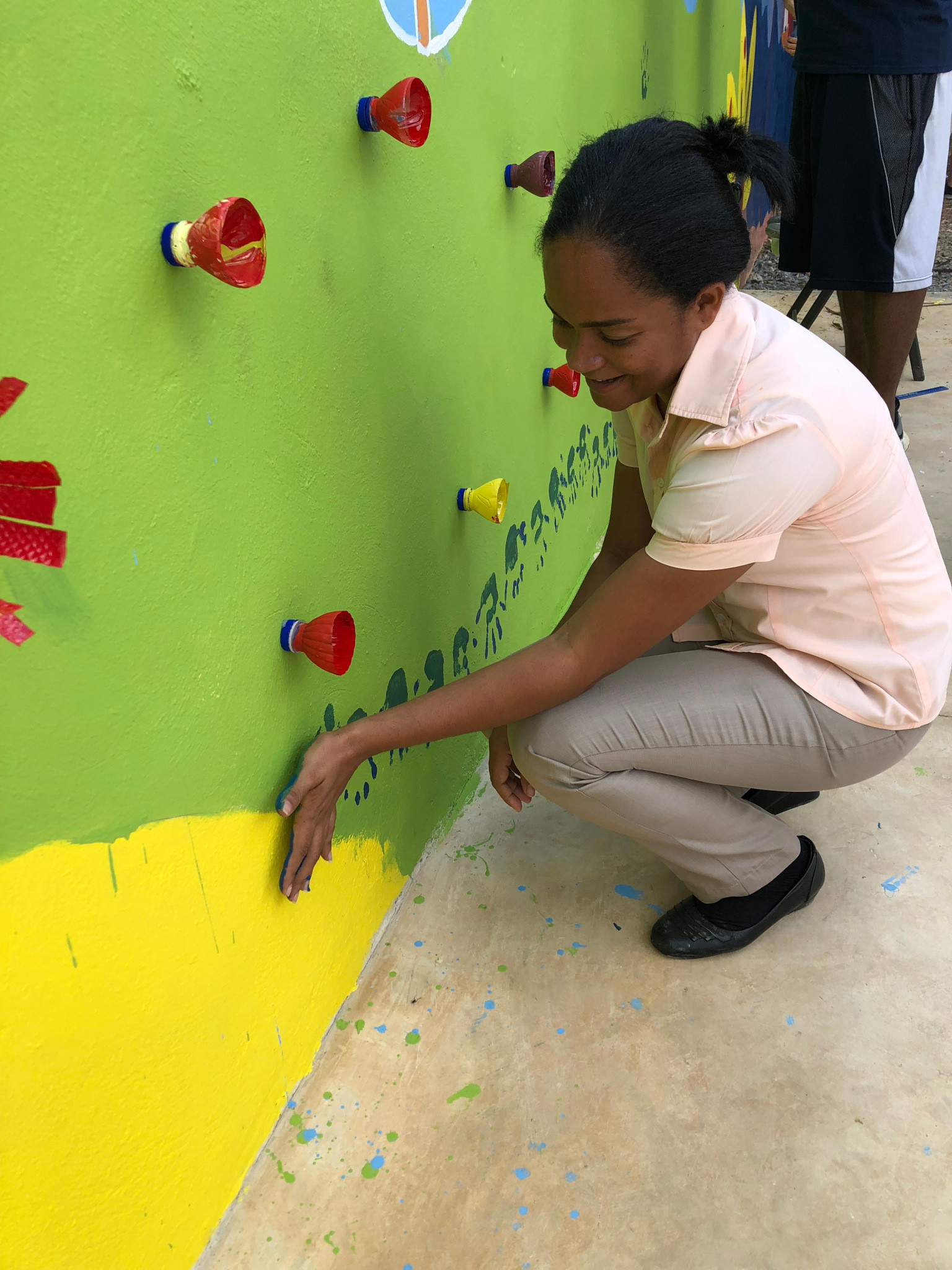 A student uses her handprint to help create a caterpillar on a mural outside a school in the Dominican Republic.
Courtesy of Maria Takacs 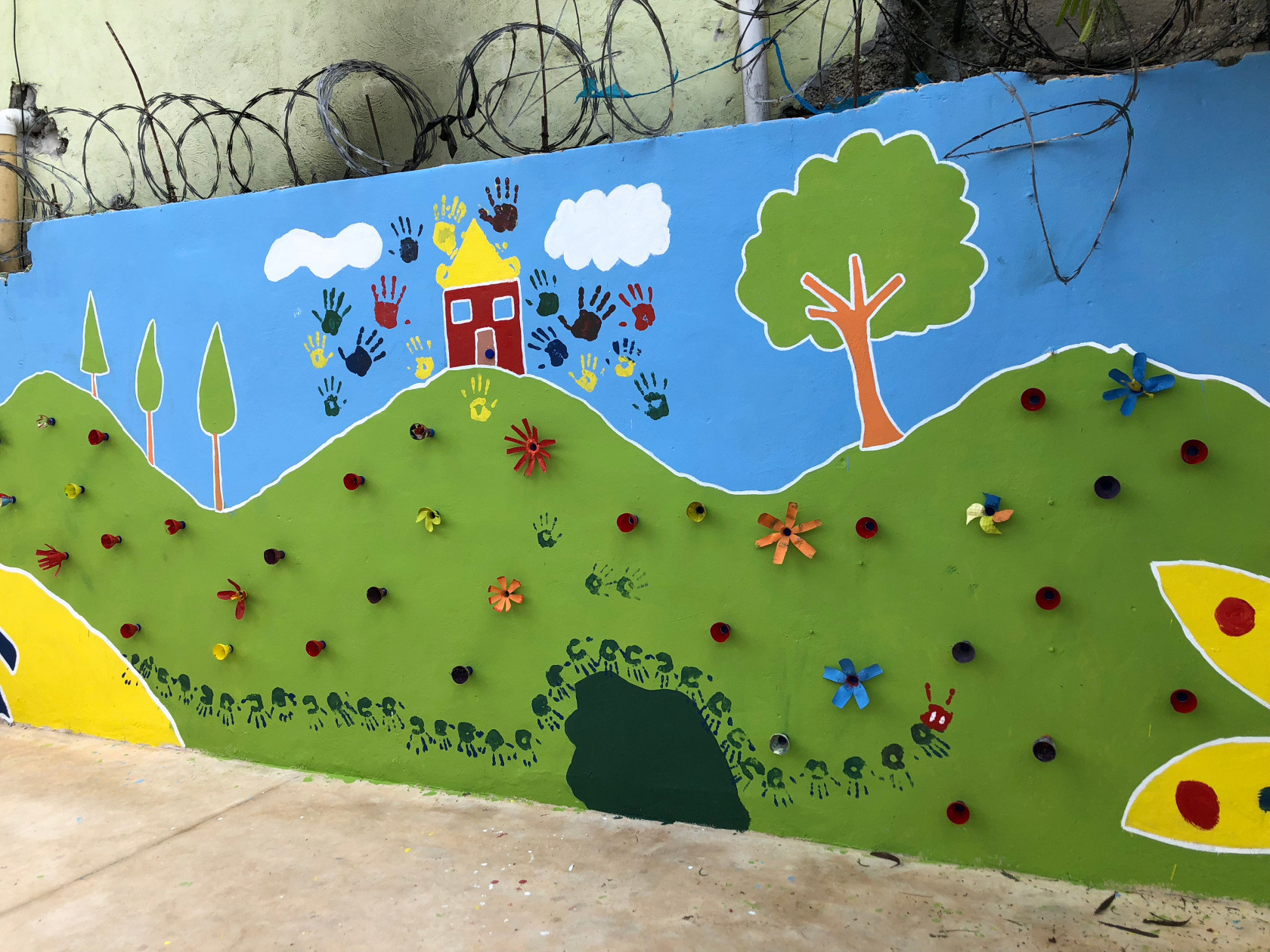 Volunteers used paint and recycled materials to create this mural outside a school in the Dominican Republic.
Courtesy of Maria Takacs 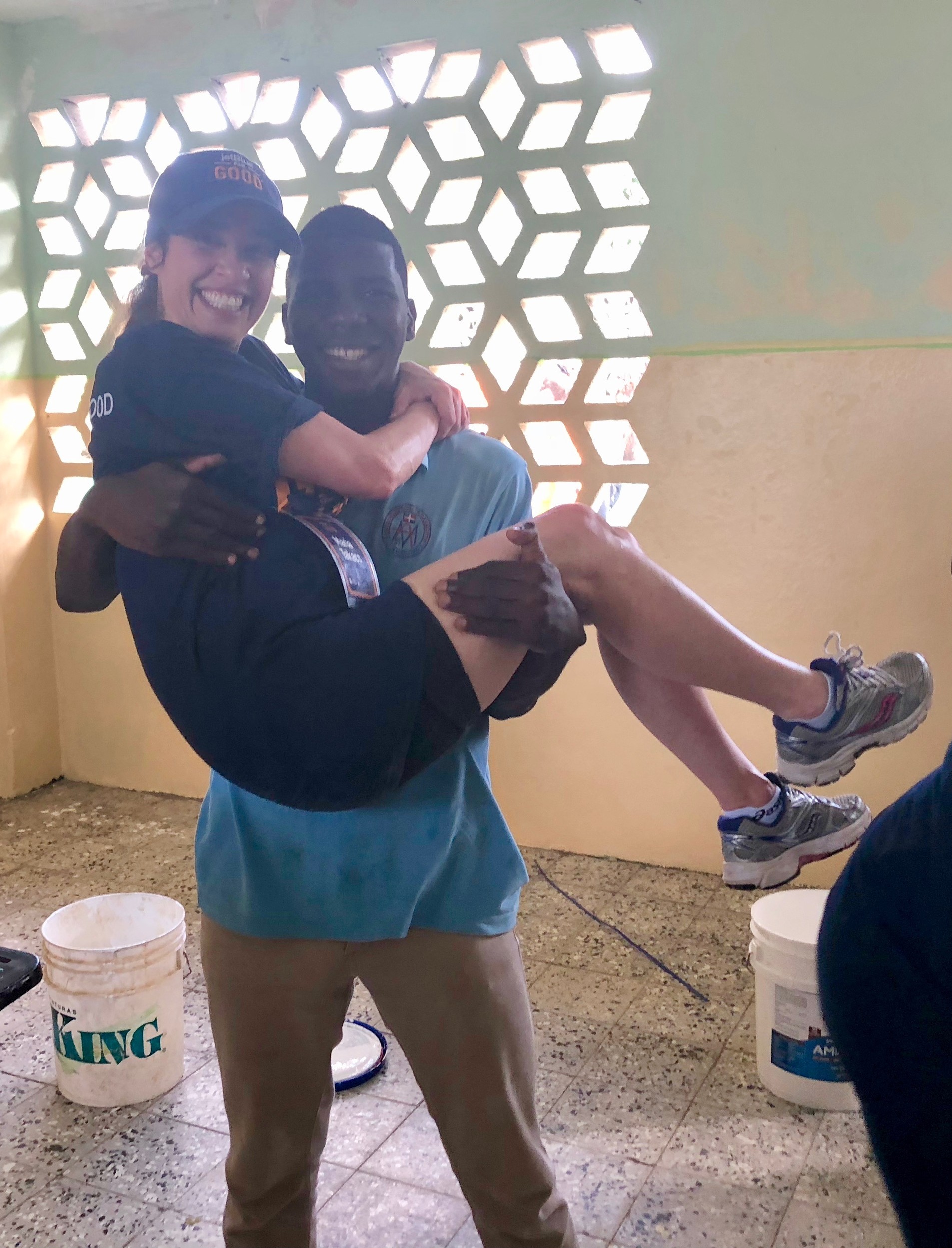 Thirteen-year-old Aneudis of the Dominican Republic picks up Maria Takacs before she and other volunteers painted the interiors of several classrooms.
Courtesy of Maria Takacs 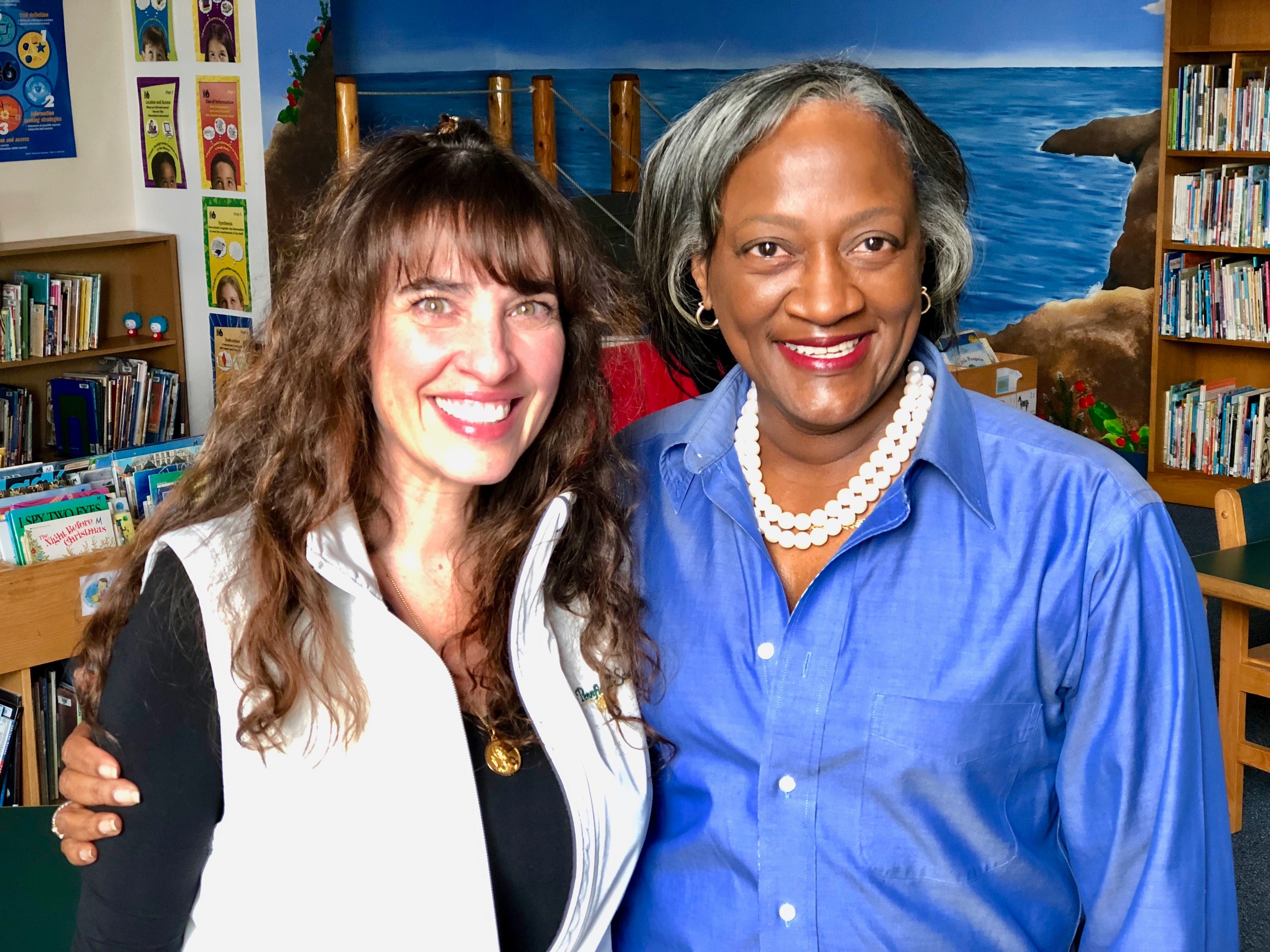 Maria Takacs (left) and Mattie Kemp of Pennfield School took a service trip to the Dominican Republic last month after Ms. Takacs won a national essay contest sponsored by JetBlue. “As a school we do a lot, but it’s not enough when you get out of that gate and look at the rest of the world,” said Ms. Takacs.
Jim McGaw 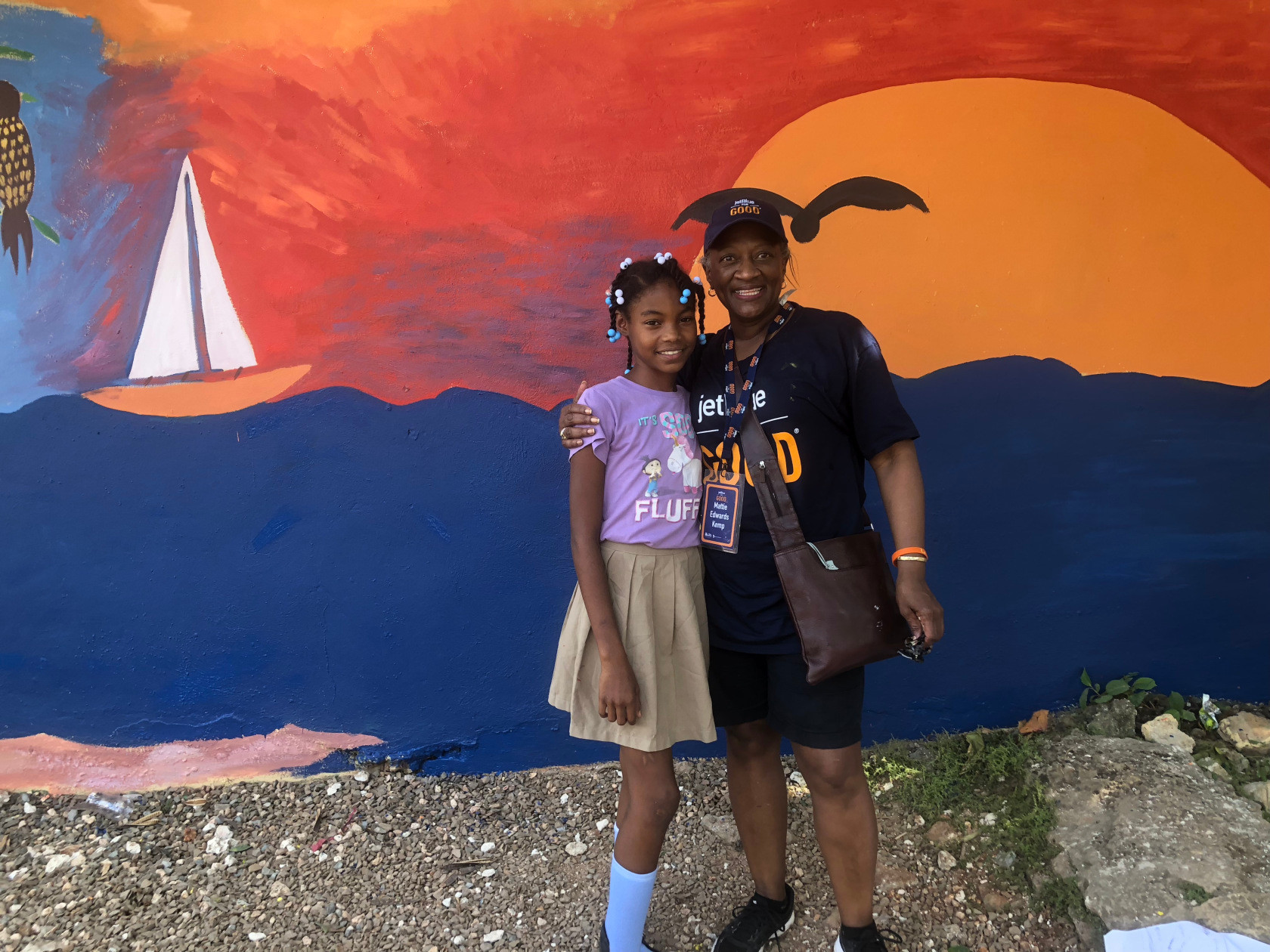 Mattie Kemp poses with her friend Melodie, a little girl who “adopted” her during a service project at one of the schools.
Courtesy of Maria Takacs 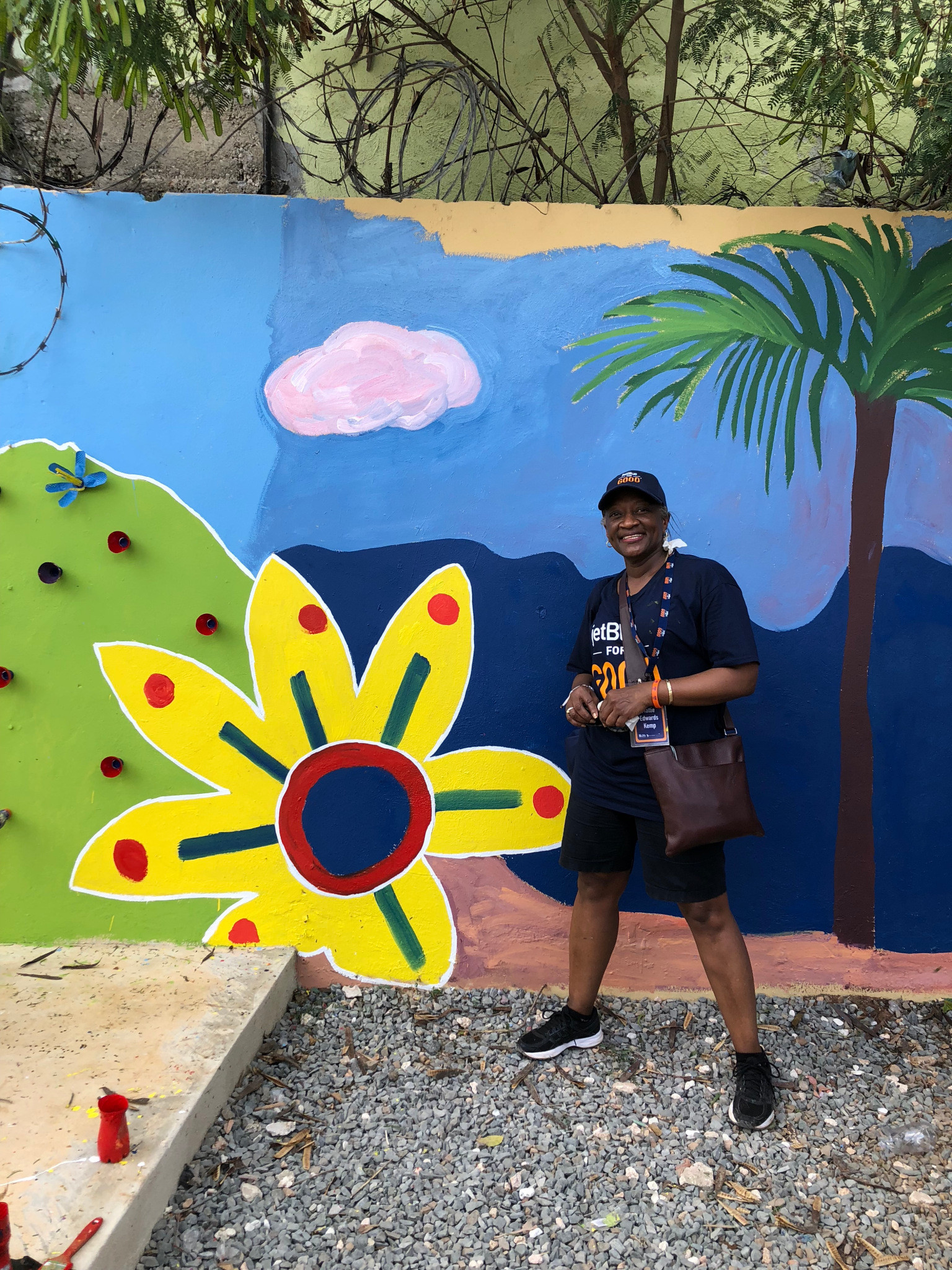 Mattie Kemp, associate head of school at Pennfield School, poses next to a mural that volunteers help create at a school in the Dominican Republic.
Courtesy of Maria Takacs 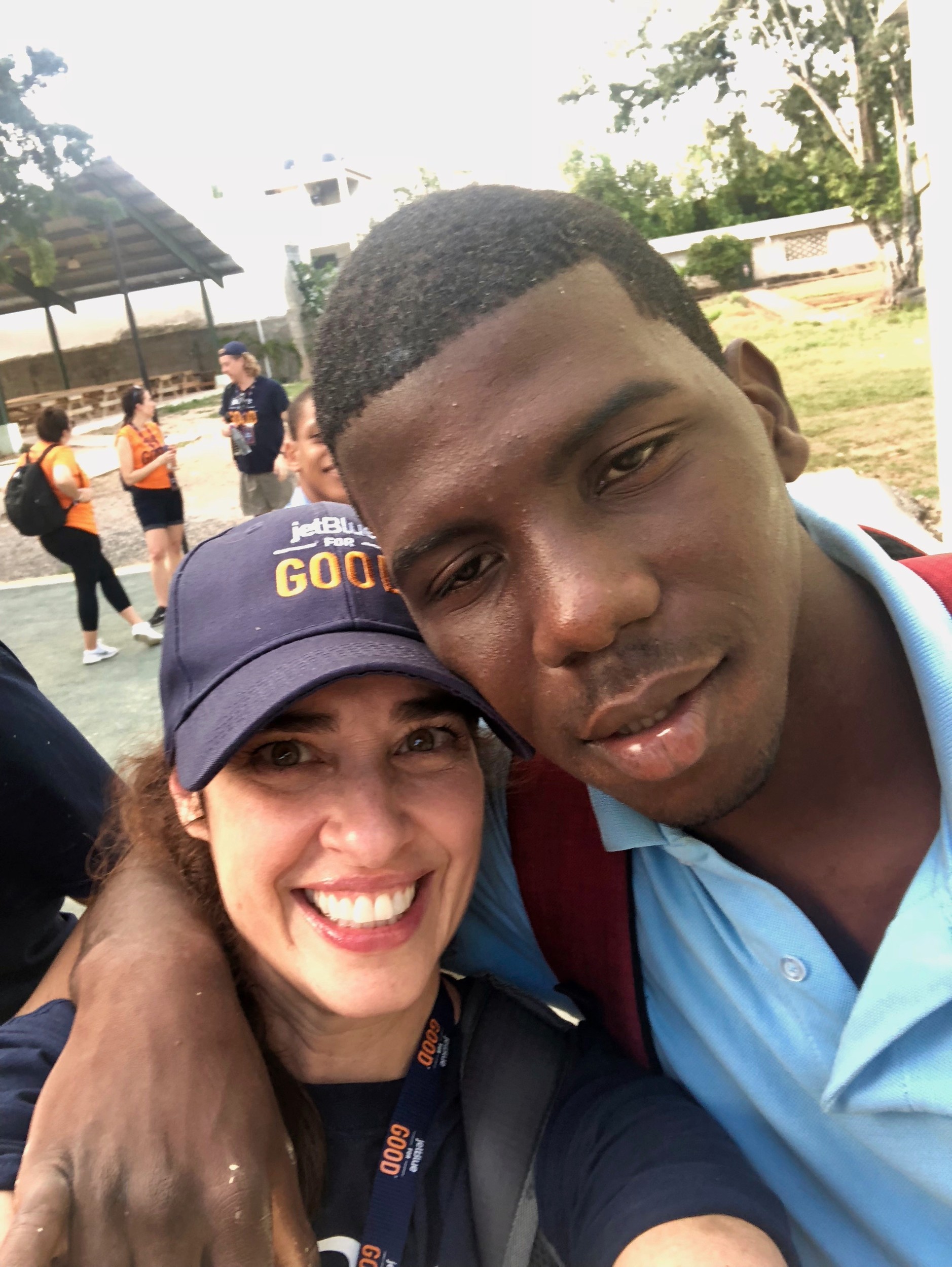 Maria Takacs with Aneudis, a 13-year-old she bonded with while taking part in a service project at the boy's Dominican Republic school.
Courtesy of Maria Takacs
Previous Next
Posted Wednesday, December 26, 2018 10:56 am

The culture in the United States is to want more, more and more, and then I go there to these kids who have nothing, and they’re happy, they’re appreciative.”
Maria Takacs, Pennfield School
By Jim McGaw

PORTSMOUTH — For the longest time, Maria Takacs said she’s always felt she was in this world for something “more than yours truly.”

Her passion for community service began with a simple lesson she was taught as a young girl growing up in Puerto Rico.

“My mom always told me that when you’re a guest at someone’s house, you always leave the house better than you found it,” said Ms. Takacs. “I believe I’m a guest here and it’s my duty to do what I can to help and make it better.”

Ms. Takacs, who teaches Spanish to children ages 3-11 at Pennfield School, recently returned from a three-day service trip to the Dominican Republic she won in an essay contest sponsored by JetBlue for Good. Despite English being a second language for her, Ms. Takacs was one of only 50 winners chosen from 40,000 entrants nationwide.

The JetBlue for Good Month trip allowed her to take a companion along, so she chose another Pennfield educator with a thirst for service projects: Associate Head of Schools Mattie Kemp.

“The first person I thought about was Mattie,” said Ms. Takacs, who kept finding herself in the same room with Ms. Kemp whenever there was a community service or volunteer project going on at school. “I admire how giving she is without people really knowing it. It’s almost like we see things through the same eyes.”

“It’s a mutual admiration society because I feel exactly the same way about Maria,” Ms. Kemp said. “We have always had the same mindset. We went as colleagues, but we came back more like sisters.”

Ms. Takacs, who keeps her own blog, filled out the contest form online in October. She didn’t even keep a copy of her essay. “After hitting the submit button, I forgot all about it,” she said.

Less than a month later, she received notification she was one of the 50 winners.

JetBlue kept the destination of the service trip a secret until the day everyone arrived in New York City to board a private jet: Nov. 27, also known as Giving Tuesday. Being teachers, Ms. Takacs and Ms. Kemp couldn’t help but research possible destination spots based on the little information JetBlue had shared beforehand.

Their guesses included the Caribbean, Haiti and Cuba. Since they didn’t need any shots, however, they crossed Haiti off the list. Ms. Takacs was hoping they’d fly to Puerto Rico, since her parents, sister and other family members still live there. But when she learned passports were required, she knew that wouldn’t be the destination.

After a “reveal” ceremony at the airport, the 50 winners and travel companions boarded the private jet and heard speakers, played games and were given gift cards to donate to their favorite charitable organization.

Ms. Kemp said it was special to be on a plane filled with like-minded people. “Everybody gave up their time, rearranged their work schedule, got their own transportation and whatever else they needed to get there — and not knowing where they’re going — because they wanted to do good,” she said.

They got the royal treatment when they landed at Punta Canta, as a water cannon salute — an honor reserved only for dignitaries — encircled the plane. “We could see the rainbows in the water. That just set the tone,” said Ms. Kemp.

The volunteers were all put up at Hotel Paradisus Punta Cana, a five-star, all-inclusive resort. At first, the resort’s extravagance made the women feel a little uneasy; after all, they were there to help the poor. “For me, it was a huge contrast to what we were doing,” said Ms. Takacs.

But they soon realized the hotel was one of JetBlue’s partners, and this was its way of contributing to the cause. “They were saying, ‘We’ll house and feed the people who you bring down to work, and we’ll also pay for the supplies that were needed,” said Ms. Kemp.

During their service trip, the contest winners’ work focused on youth and education, community and the environment. For the first day, they partnered with the Dream Project to help fix up a school for students with special needs.

The school’s biggest need was a roof, the lack of which made the classrooms inhabitable. Jet Blue paid professionals to do that job, while the contest winners and their companions painted the classrooms to make them brighter and more cheery.

“The classrooms were destroyed and had very little light,” said Ms. Takacs, noting there were no proper windows, only carvings through concrete walls that let a scant amount of sunshine in. One dim light bulb hung from the ceiling.

“We had to paint the ceilings and the walls. They actually researched what colors would be good for these types of students to calm them down — creamy, two-tone yellows and the white on the ceiling,” she said.

They also got to bond with the school’s students, including a 13-year-old named Aneudis who found an instant connection with Ms. Takacs. “My eyes met this boy, and his eyes met me,” she said.

During one inspirational exercise where volunteers paired up with students to act out the word “baby,” Aneudis literally swept Ms. Takacs off her feet. “He was humungous and I’m tiny,” she said.

The second day found them at a different school, one serving more than 200 students in only four or five classrooms — forcing the school to hold separate morning and afternoon sessions. “That’s not a full day of education,” Ms. Takacs noted.

At night, adults came there to learn to read and write. (The women learned that only 50 percent of the population was reading at a sixth-grade level or above.)

“So this school is more than just a school; it’s a center of the community,” Ms. Kemp said.

The school’s outdoor basketball court was a popular draw for the community, so volunteers’ main job was to create a mural on a nearby cinderblock wall using paint and used bottle caps and water bottles to give it a 3-D effect. (Trash is a huge problem in the Dominican, the teachers said, so using recycled materials was important.)

Although neither woman possess any strong artistic skills, Ms. Kemp volunteered the pair for free-hand art. “There was nobody on that team,” Ms. Kemp explained. “Besides, Maria can do anything she puts her mind to.”

Turns out she was right. An earlier group had already started things off by painting a green mountain, so Ms. Takacs designed a house with handprints to form the roof and a bottle cap for the doorknob. She borrowed students in the school — 36 kids were packed like sardines into one tiny first-grade classroom — to make handprints forming a long caterpillar.

For the final day of the trip, volunteers constructed buoys to keep boaters from damaging coral reefs, which are important to the areas’s ecosystem and tourism. They cut lengths of PCP pipes and built the buoys using inexpensive, readily available materials so they wouldn’t fall prey to thieves.

“We didn’t do the cement part, but our job was to cut, glue, paint, and put the buoys together,” said Ms. Kemp.

The trip was a revelation to the women, even though they had taken part in many past giving projects. (Ms. Takacs and other teachers took a service trip to Costa Rica with children in grades 6 to 8 last year.)

“This changed me. It was what I needed to do. It sort of centers you to what you’re here for,” said Ms. Takacs, adding she’d like to see every faculty member at Pennfield get the opportunity to enjoy a similar experience. “As a school we do a lot, but it’s not enough when you get out of that gate and look at the rest of the world.”

Ms. Kemp nodded her head. She recalled a little girl named Melodie who “adopted” her during her trip to the Dominican. “The only thing she asked me for was ‘agua’ (water),” she said.

“The culture in the United States is to want more, more and more,” added Ms. Takacs. “And then I go there to these kids who have nothing, and they’re happy, they’re appreciative. It really shocked me.”

There are so many things youngsters can do to make their little world in Rhode Island better, the two women said.

“Our kids have an opportunity to see what it’s really like, because I don’t think they understand not having a pair of sneakers — and your feet are literally on the ground,” Ms. Kemp said.

Pennfield School
Your community. Your stories. Your inbox.