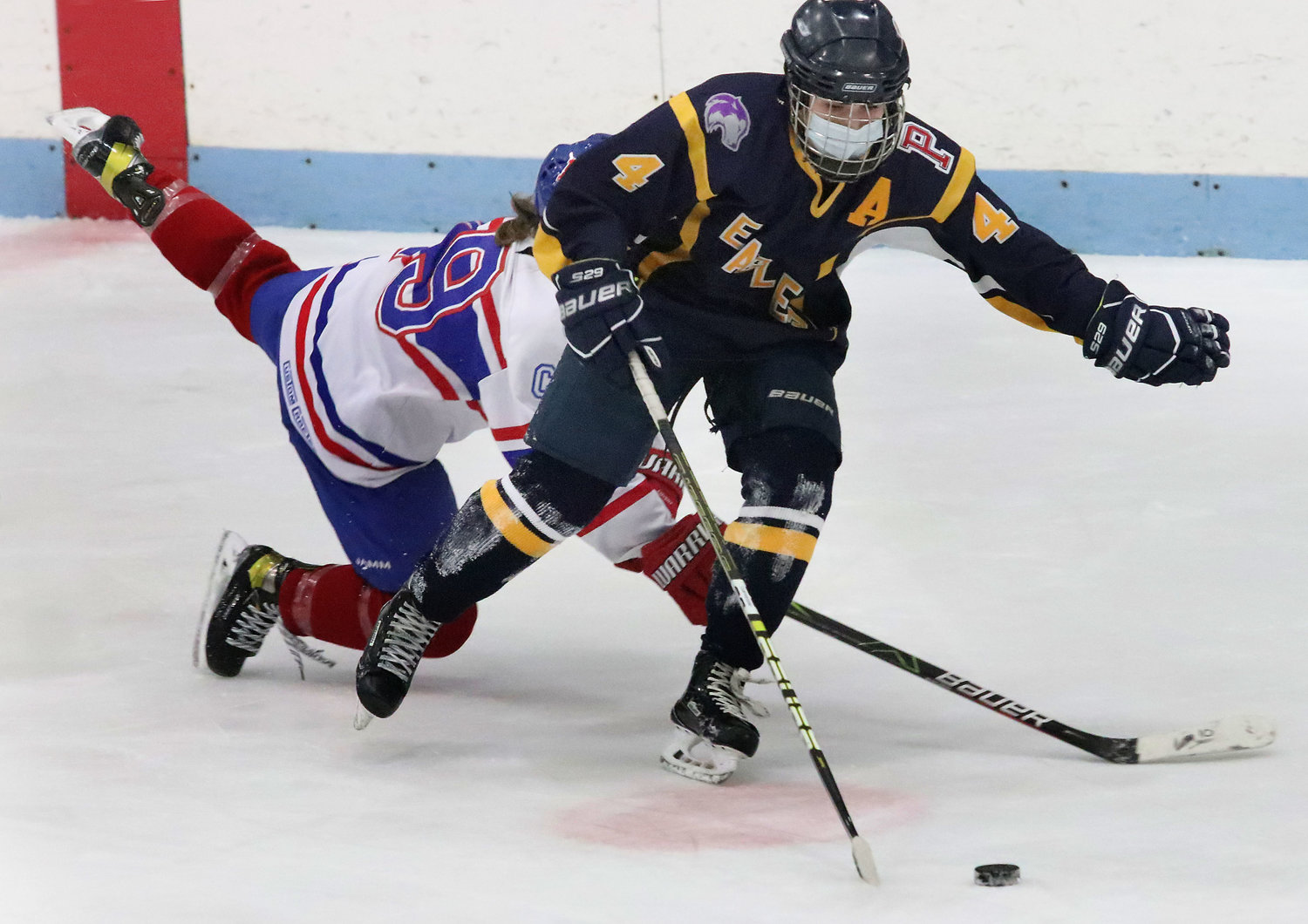 Melissa Levreault skates the puck out of the East Bay zone with a Mounty on her back in the second period during the East Bay girls hockey team's 5-1 victory over Mount St. Charles at Adelard Arena on Tuesday night. 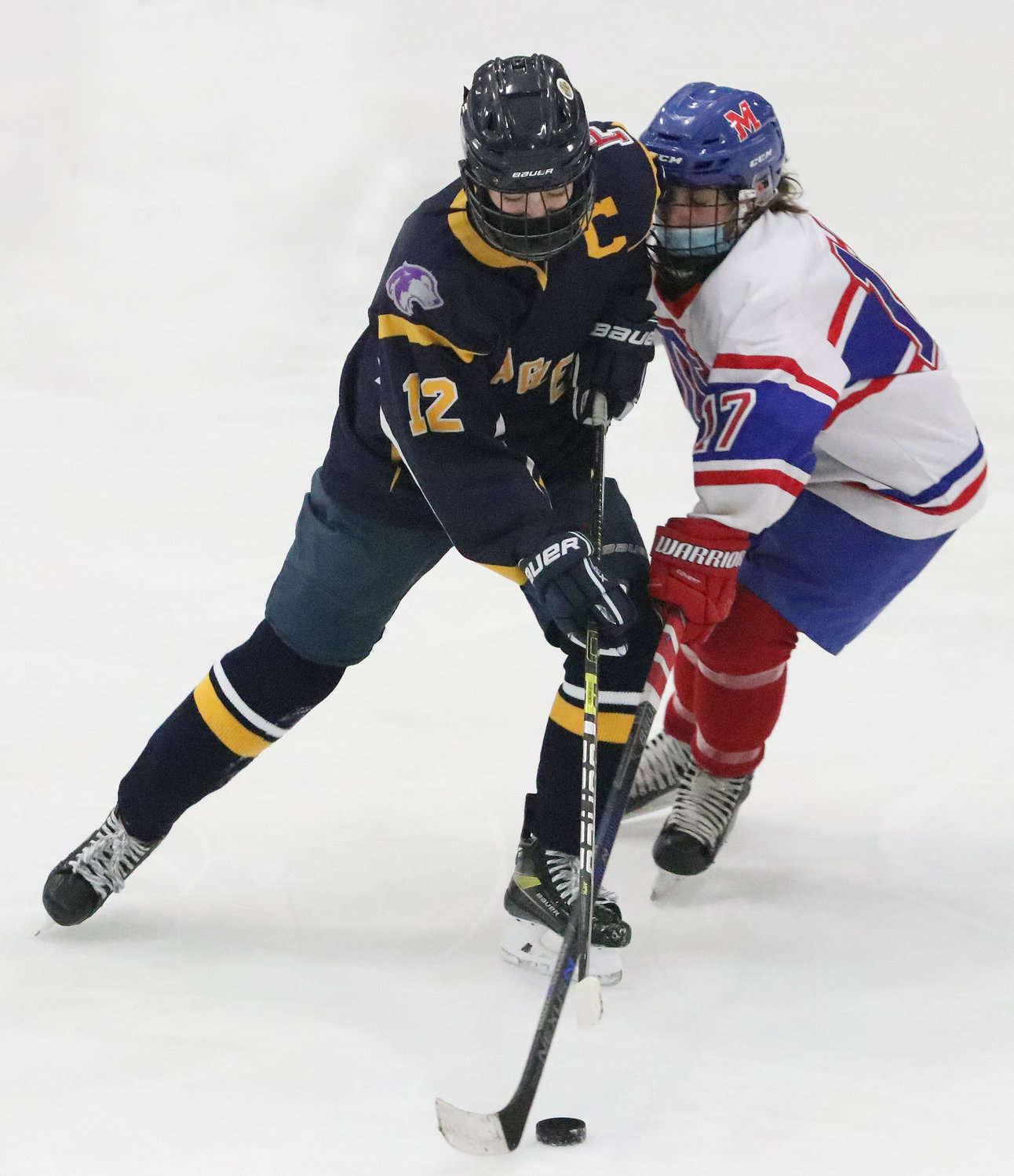 Kat Barker pushes past a Mount defender to take a shot on goal during the East Bay girls hockey team's 5-1 victory over Mount St. Charles at Adelard Arena on Tuesday night. 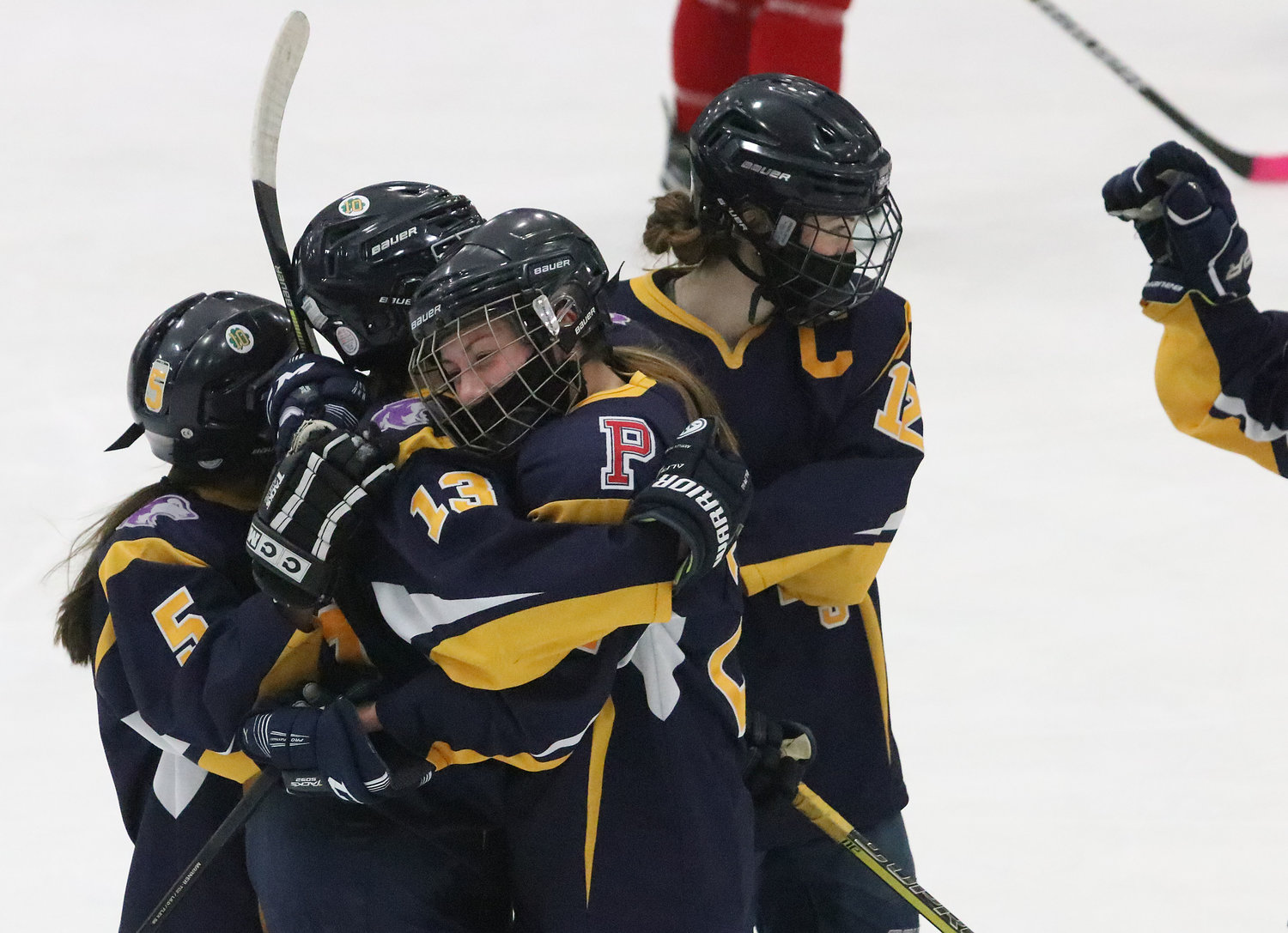 Samantha Yee (left), Sarah Yee and Kat Barker congratulate Alexandra Phelps after she scored on a shot from the point in the second period to give East Bay a 4-0 lead. 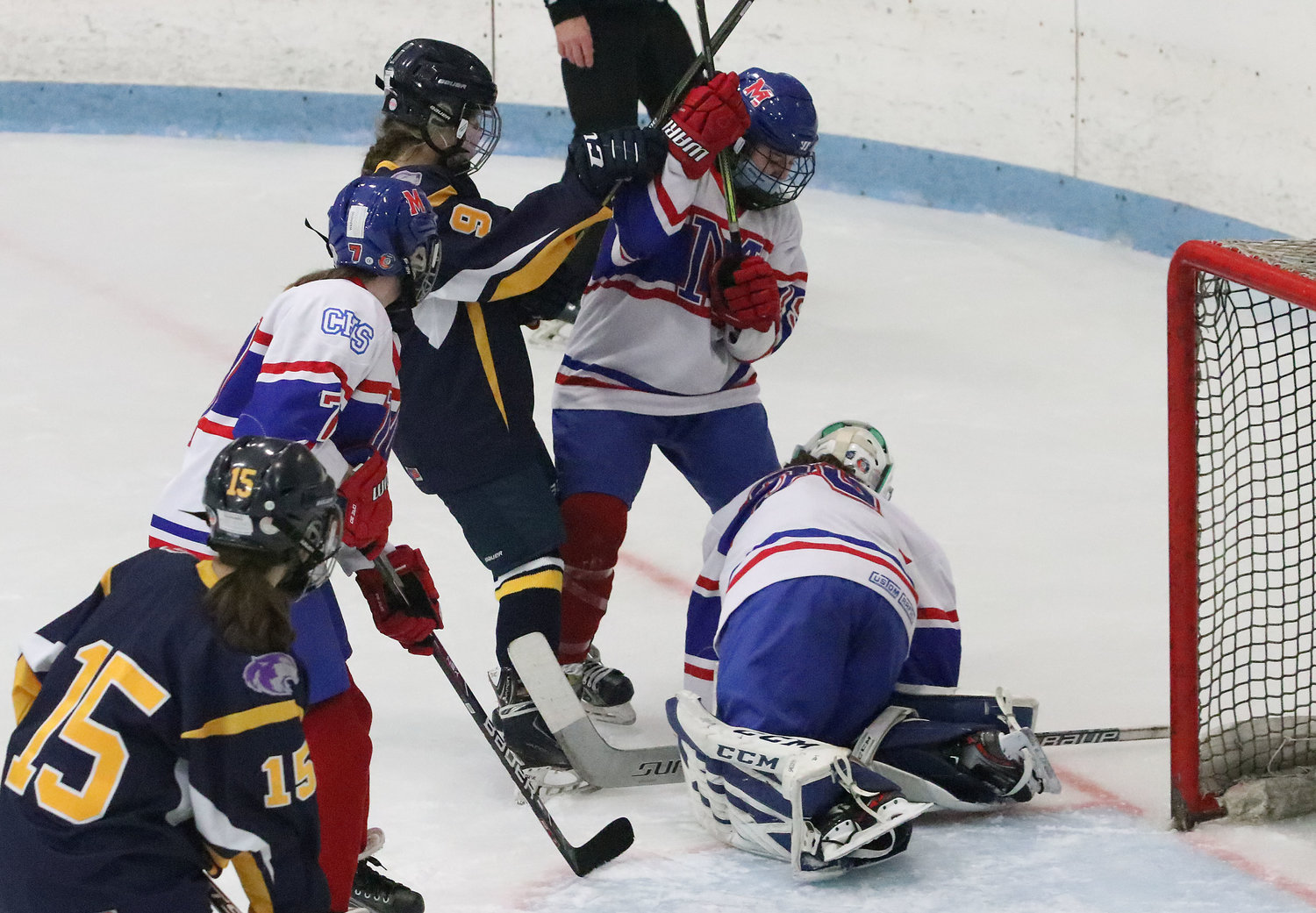 Brigid Carlin (left) and teammate Mia Phelps pressure the Mounties as goaltender Grace Davenport covers up the puck in the second period. 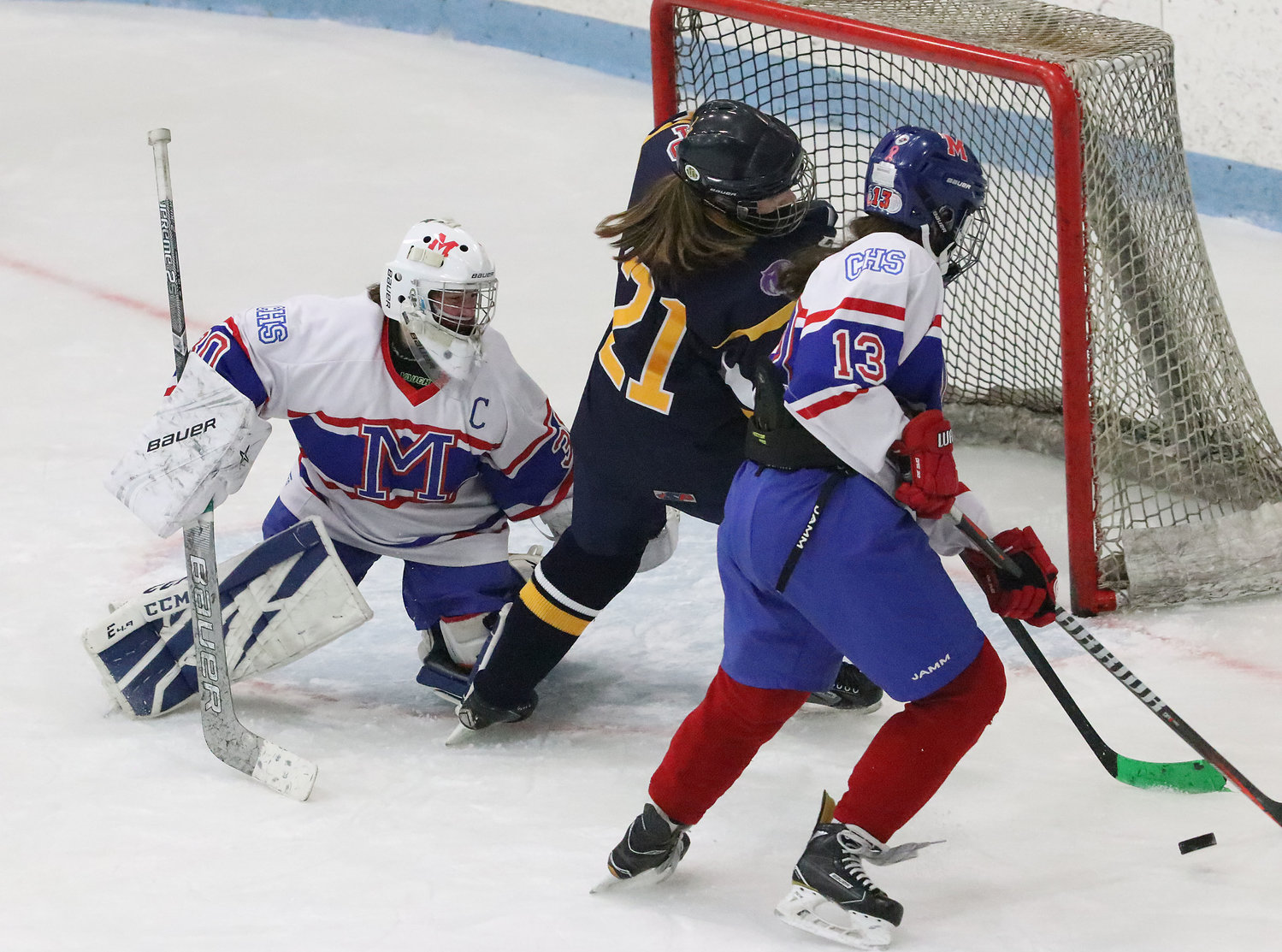 Sarah Yee is knocked off balance while attempting to score as a pass scoots across the goal line. 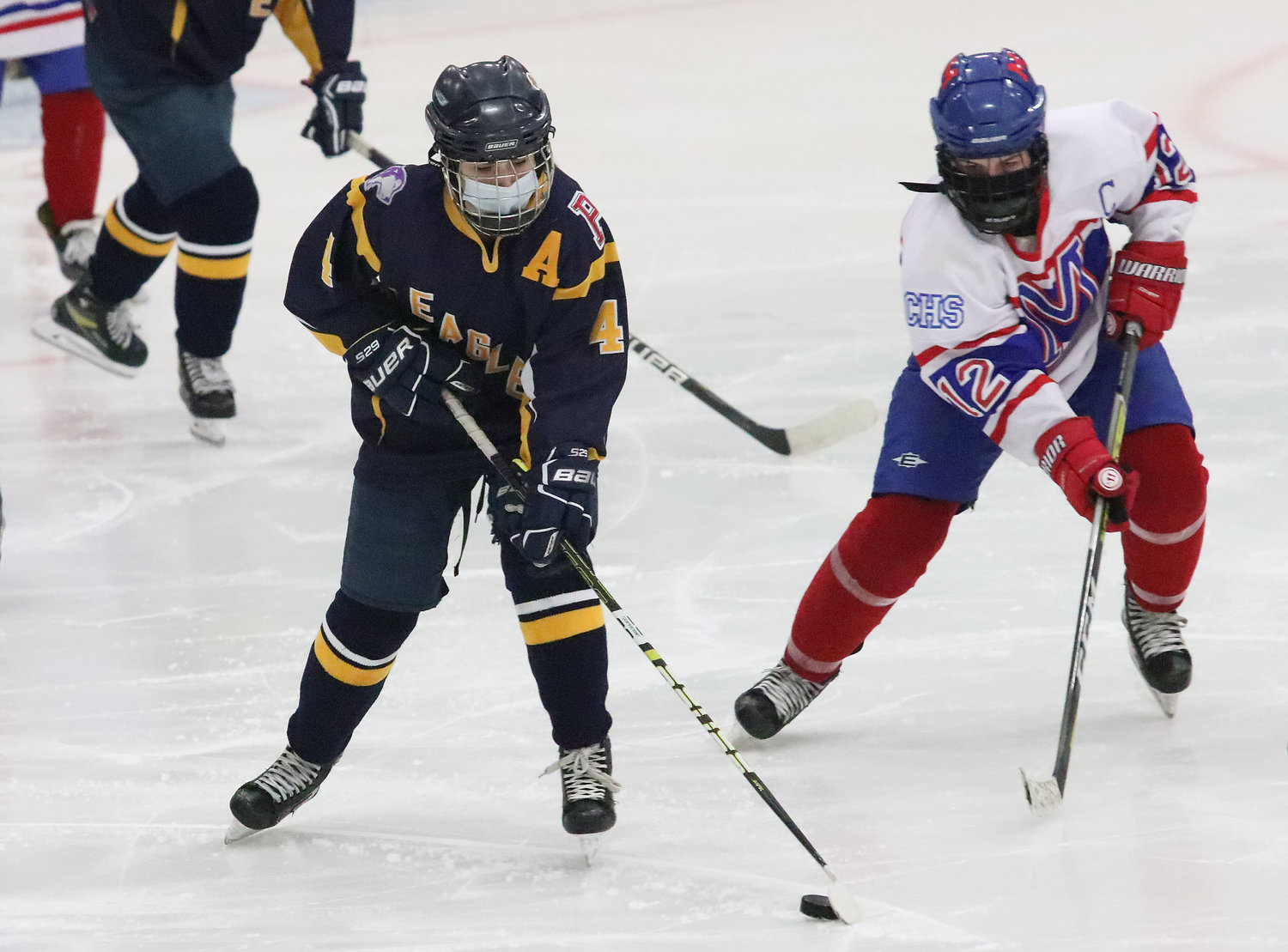 Melissa Levreault carries the puck into the Mount defensive zone. 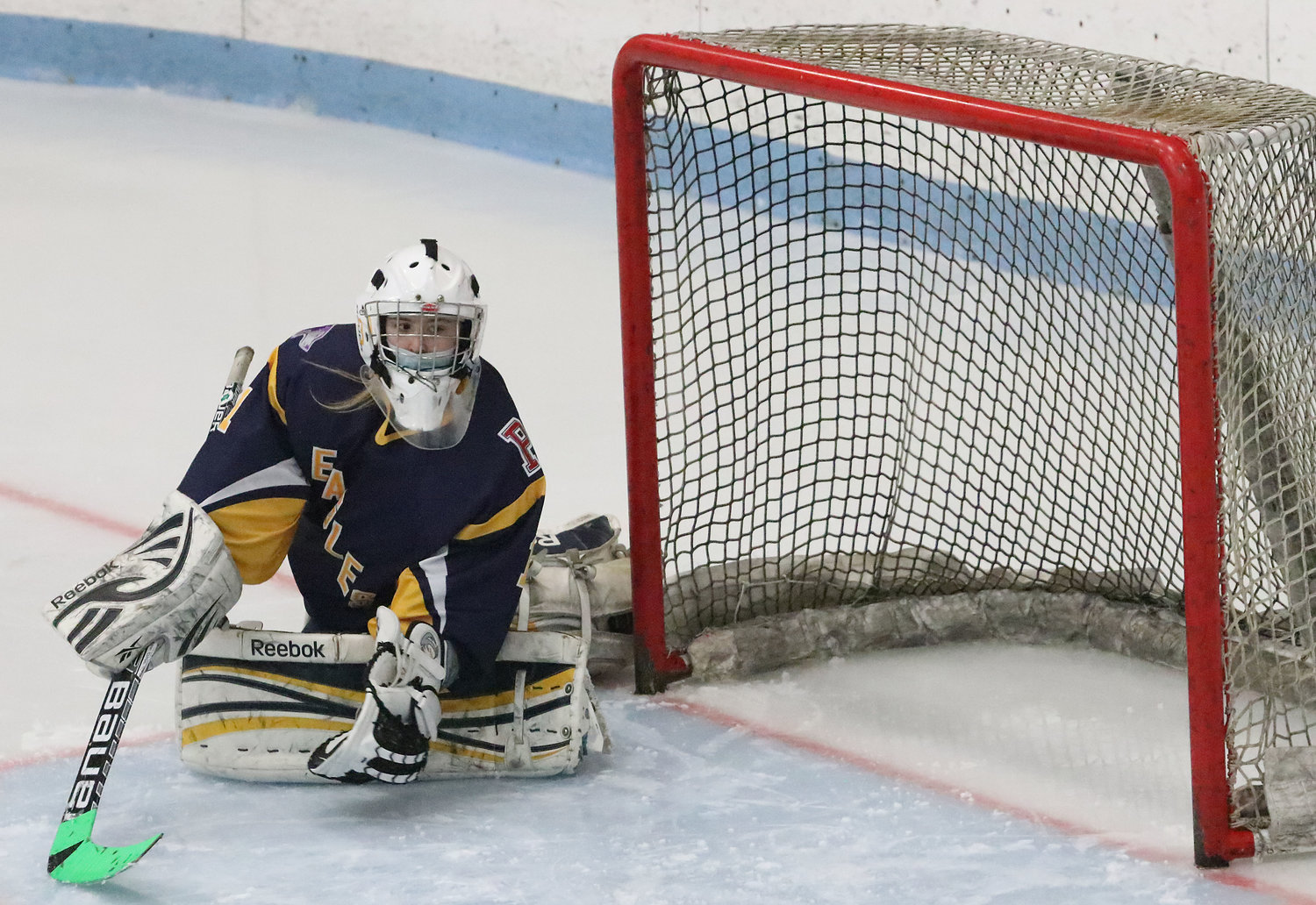 East Bay goaltender SaraTurillo makes a save in the third period.
Previous Next
Posted Wednesday, February 3, 2021 11:10 am
Photos and story by Richard W. Dionne, Jr.

The East Bay girls hockey team crushed Mount St. Charles/Cumberland/Lincoln Co-op 5-1 at Adelard Arena on Tuesday night. The Eagles pasted Mounty goaltender Grace Davenport with 45 shots as they boosted into third place with a record of 2-1. Five different players scored goals for East Bay. Melissa Levreault scored in the first period to give the Eagles a 1-0 lead. In the second period, Kat Barker, Sara Yee and Alex Phelps scored to make it 4-1. Brigid Carlin scored the fifth goal in the third period.

The Eagles just started their sprint of a season and play a bunch of games through February with the playoffs beginning in March. "It's about Covid," said head coach Michael Cox. "I'm just happy if we can practice tonight." The biggest challenge coach Cox said is keeping the players safe. "We have seating charts on the bench and test once a week. We've had a player test positive and some have had to quarantine," he said.

"I tell the girls it's a blessing that we can skate. I'm thrilled that we are playing, but I'm most proud of that fact that our girls are doing an awesome job. It's difficult for high school kids to stay compliant."

Kat Barker and Marissa Levreault are the team's senior captains. Barker, the league's leading scorer last season, center's a line with Levreault and junior Sarah Yee.  "Melissa moved up from the second line. She's put in more ice time than anyone," said coach Cox. "Sarah is a stud. She's grown taller and got a lot stronger. She worked out, playing soccer during the summer. She'll be instrumental down the stretch." The line has been working well for the Eagles, scoring most of the team's goals this season.

Coach Cox also lauded his second line consisting of senior Brigid Carlin, junior Taylor DeFraites and freshman Mia Phelps.  "Brigid stepped up from the third line. she's our best cheerleader on the team," said coach Cox. "It's been about being on the team for her. She's worked hard and has been committed and it's paid off. She's a strong second liner," he said.

The team got lucky when Sophomore goaltender Sara Turillo decided that she wanted to join the team.  When Ellee Kopecky graduated in 2020 the goaltending positon looked bleak as her back up decided not to play this season. Coach Cox made some inquiries, Then Turillo's mom called 'out of the blue.'

"Her mom called me and asked if I could find some goalie equipment. Her daughter wanted to give it a try," coach Cox said. "I found her some gear and she started the process in June." Turillo had never skated and had never played hockey before, he said. "We did some skills in the summer.  Sara never missed a practice. She's worked very hard and has been committed to getting better," coach Cox said.

In the games, "She's been outstanding," said coach Cox. Turillo made 11 saves for the Eagles in their 5-1 win over Mount and made 30 saves during the team's 5-1 loss to LaSalle last week.

"It's worked out well. The best thing is she's only a sophomore. We'll have her for a few more years," said coach Cox.

"Brown Hockey coach Brendan Whittet has been helping out the team," said coach Cox.  Whittet's daughter Peyton, plays for the team. He's been able to help out due to the fact that the Brown Hockey season was cancelled.

The team will play 8-plus games in February, with a big game coming up against second place Burrillville on Saturday.

"We are hoping to get Peyton back from quarantine and hopefully we can have our full team ready to play," said coach Cox.

Police: Woman arrested after driving over lawn on Prudence Island