Meet 12-year-old Tyler Rhynard of Warren. Following in the footsteps of his high-powered athletic parents, Tyler is making his own history. 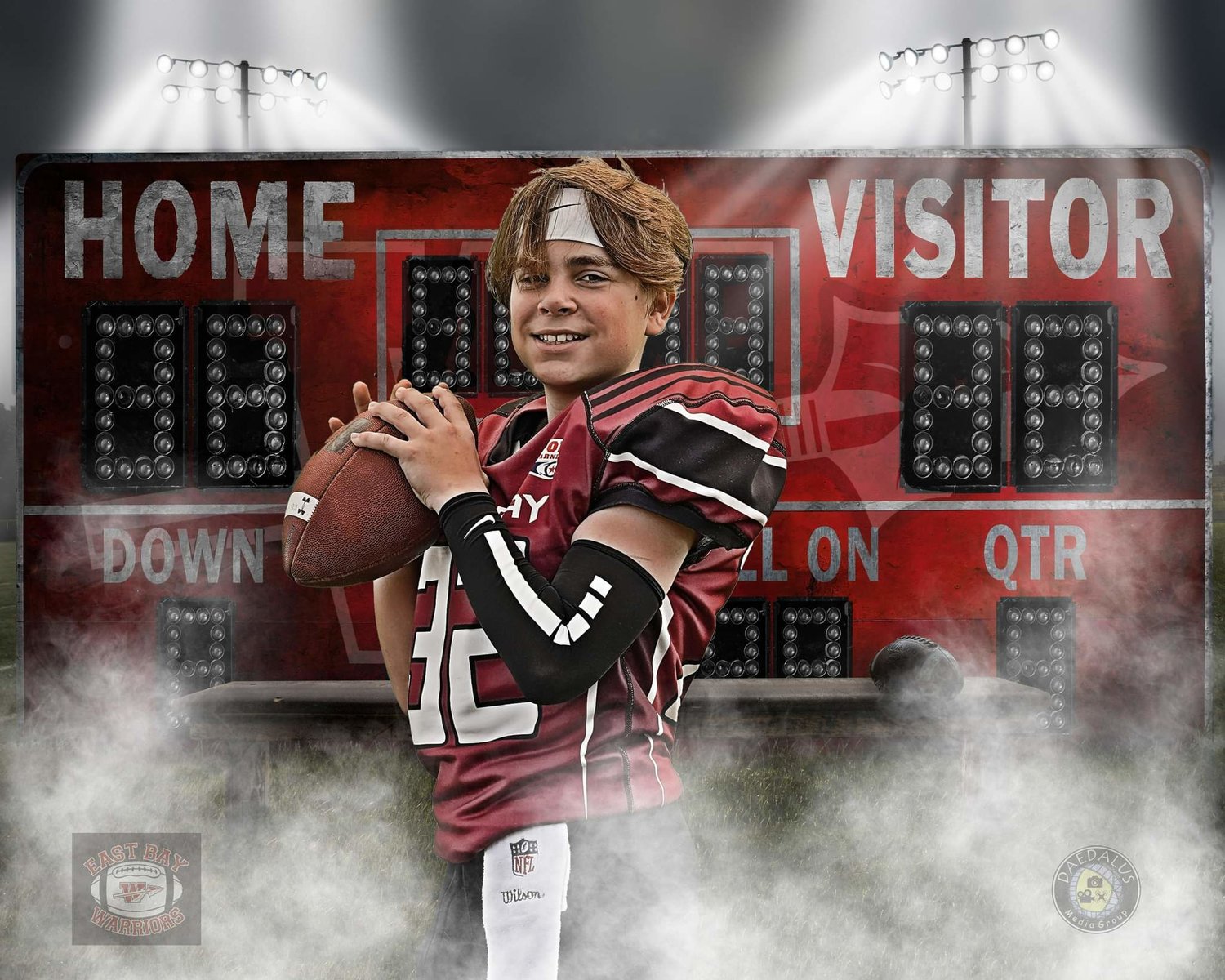 Tyler Rhynard is already making a national name for himself on the football field.
Daedalus Media
Posted Thursday, January 27, 2022 12:00 pm
By Manuel Correira

Every once in a while a youngster comes along who takes his particular sport by storm. Meet 12-year-old Tyler Rhynard of Warren.
Following in the footsteps of his high-powered athletic parents, Tyler is making his own history.

Tyler made the All American Team for 5th-8th grade as a 6th grader, and will be playing in the Dream All American Bowl at Cowboys Stadium this April. He was the only youngster in New England chosen. He is ranked among the Top 130 kids in the U.S., and Ranked Top 3 Defensive Backs in the U.S. He will be representing the local East Bay Warriors Youth Organization streaming Nationwide.

Tyler was born on Oct. 4, 2009, and is the son of Mark Rhynard and Jennifer Rhynard, of Warren. Mark is a former two-sport All State athlete for Mt. Hope School in football and wrestling, and Jenn, is a former two-sport athlete at Mount Hope in gymnastics and former All Star softball player for Warren. They’ve guided their son every step of the way with love and devotion.

Both parents graduated from Mt Hope High School. Tyler has also been a resident of Warren all his life. He attended Hugh Cole elementary school from 2013 to 2021, for pre-school through 5th grade. Tyler is now a 6th grade student at Kickemuit Middle School.

Tyler Rhynard comes from a blue-blood athletic family. His grandfather (Jenn’s father), Richard Soares, played football in Warren for Pat “Doc” Abbruzzi in the late 1960s and early 1970s. Other family members who starred in football at the former Bristol High School included Bruce and Wayne Marshall, Alan and George McKenzie, Tony “Toto” Alves, and the most famous of all the Alves’ family, the late William “Buddy” Alves, the most prolific football running back and scorer at West Warwick High School in the early 1950s. Great-grandparents, the late Joseph and Agnes Marshall, and grandparents, Emma and Kenneth Kaiser, have also been a part of the family football legacy in one way, shape, or form.

Tyler began playing Pop Warner football for the East Bay Warriors in 2015, and two years ago, decided to give up soccer, wrestling, basketball and baseball to focus on his biggest passion — football. He has dedicated himself to a four-day per week off season strength and conditioning program at Anchor Health and Performance gym, and during the off season, continues performance and pliability training during the season.

Said his father, “Tyler has an amazing group of players around him that helped lead the East Bay Warriors to a 2019 RISMA 10U Final Four, a New England Youth Football 10U Championship in 2020, and getting ready for his Final Year at the 12U Level in 2022 with many returning players looking for another championship.”

On a more personal note, Mark described a situation involving his son that opened a few eyes.

“We lost my brother the season Tyler started playing football,” said Mark. “That season when Tyler got his first touchdown, (and to our surprise) he pounds his heart and points to the sky. The referee tossed a flag and approached Tyler to talk about it. The referee then waives the flag and the game continues. After the game, the referee tells us that Tyler pounds his heart for his family and points to the sky to honor his uncle. It became very emotional.”

Rhynard may be on his way to stardom as he progresses along the challenging athletic trail, but it’s the little things which has carried him to early success.

“The quality I am most proud of with Tyler is the way he plays the game with heart and passion,” said his father. “Tyler truly plays for his team, is unselfish, and wants everyone around him to succeed. Tyler has pounded his heart and points to the sky after every TD for the past seven seasons. His number one goal is to play D1 football for Boston College or URI.”