A new chapter for spectacular Sealands 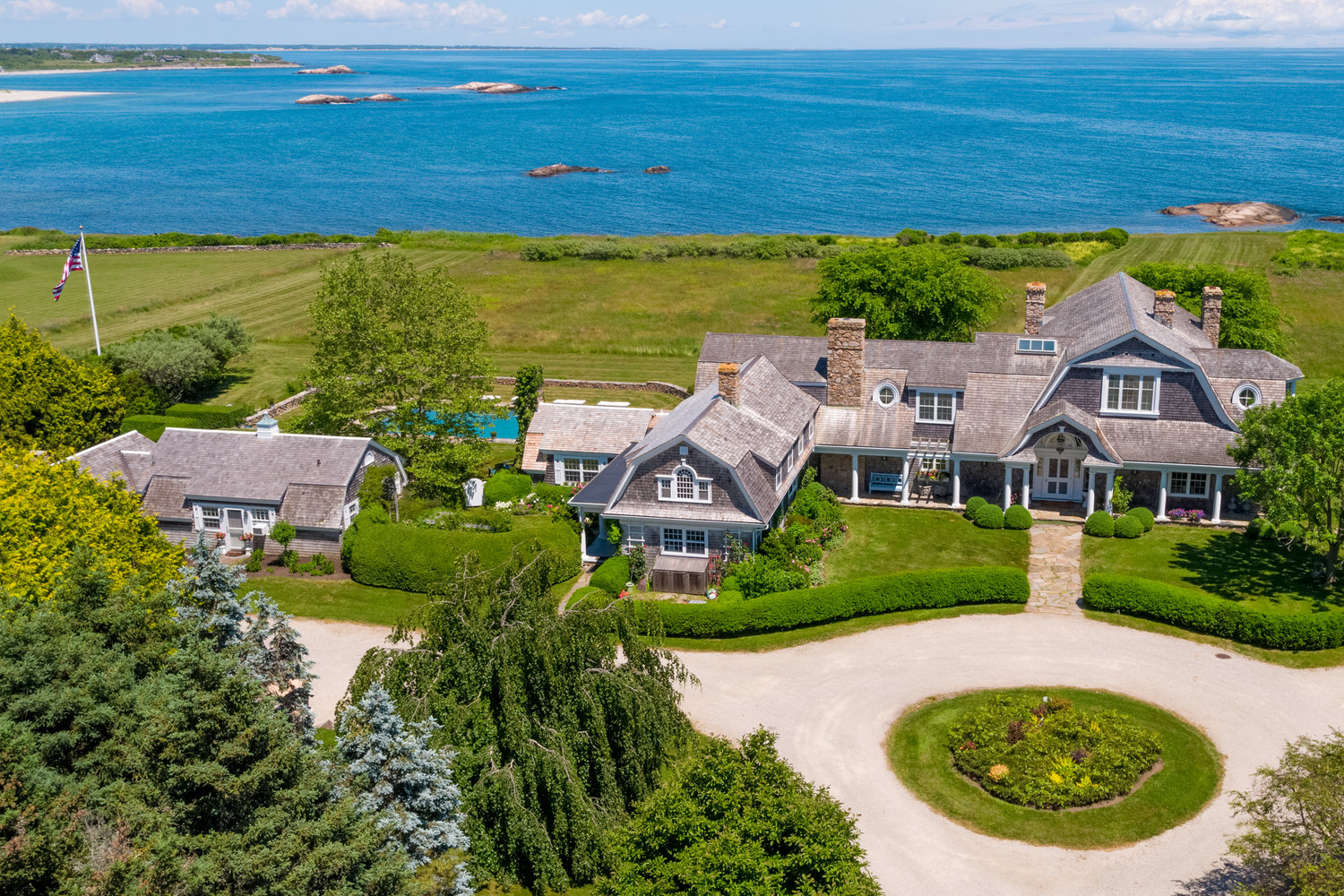 An aerial view to the west, past Sealands to Long Pond, Round Pond, Sakonnet Harbor and Aquidneck Island. 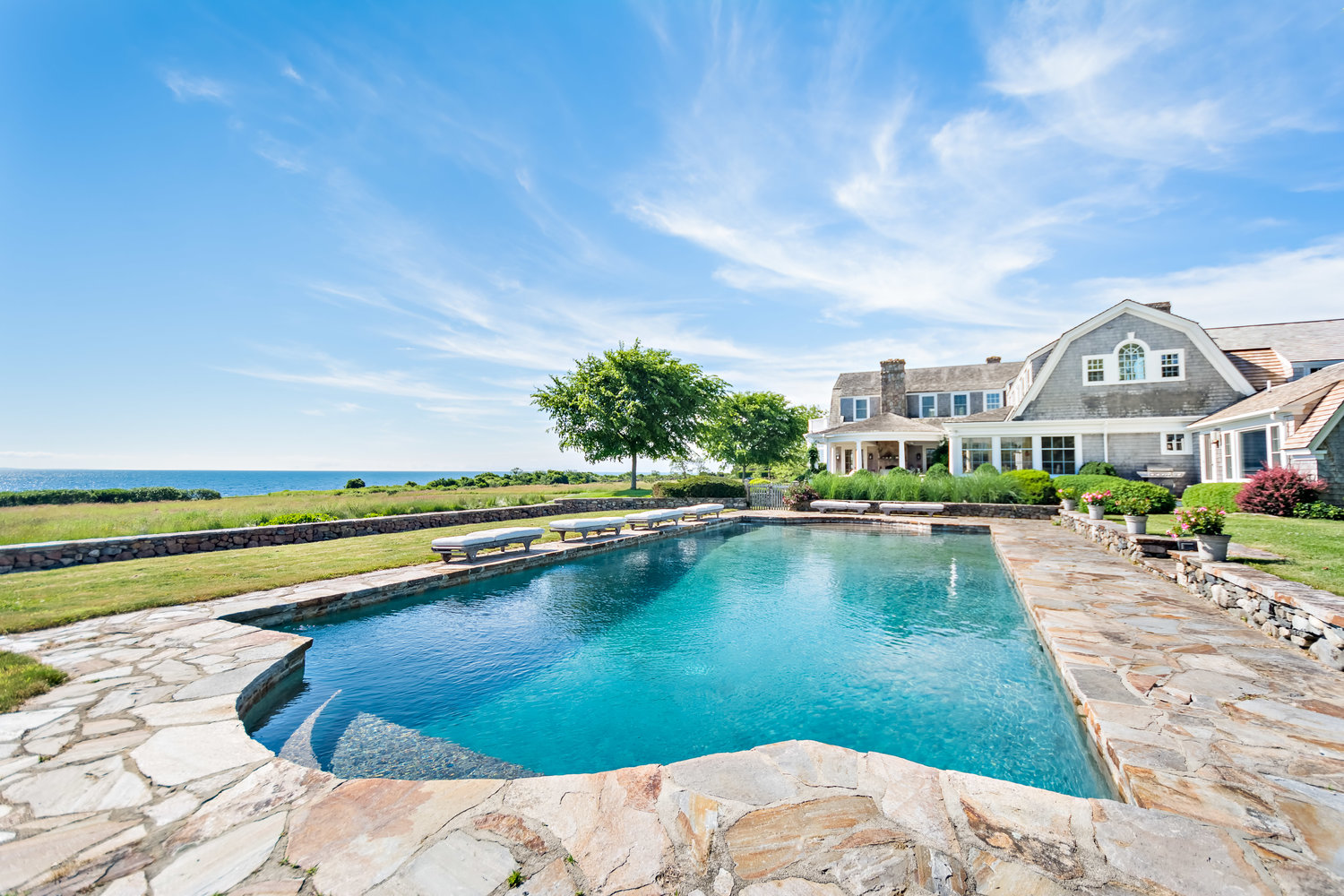 Sealands with its large pool and stone deck overlooking the ocean. 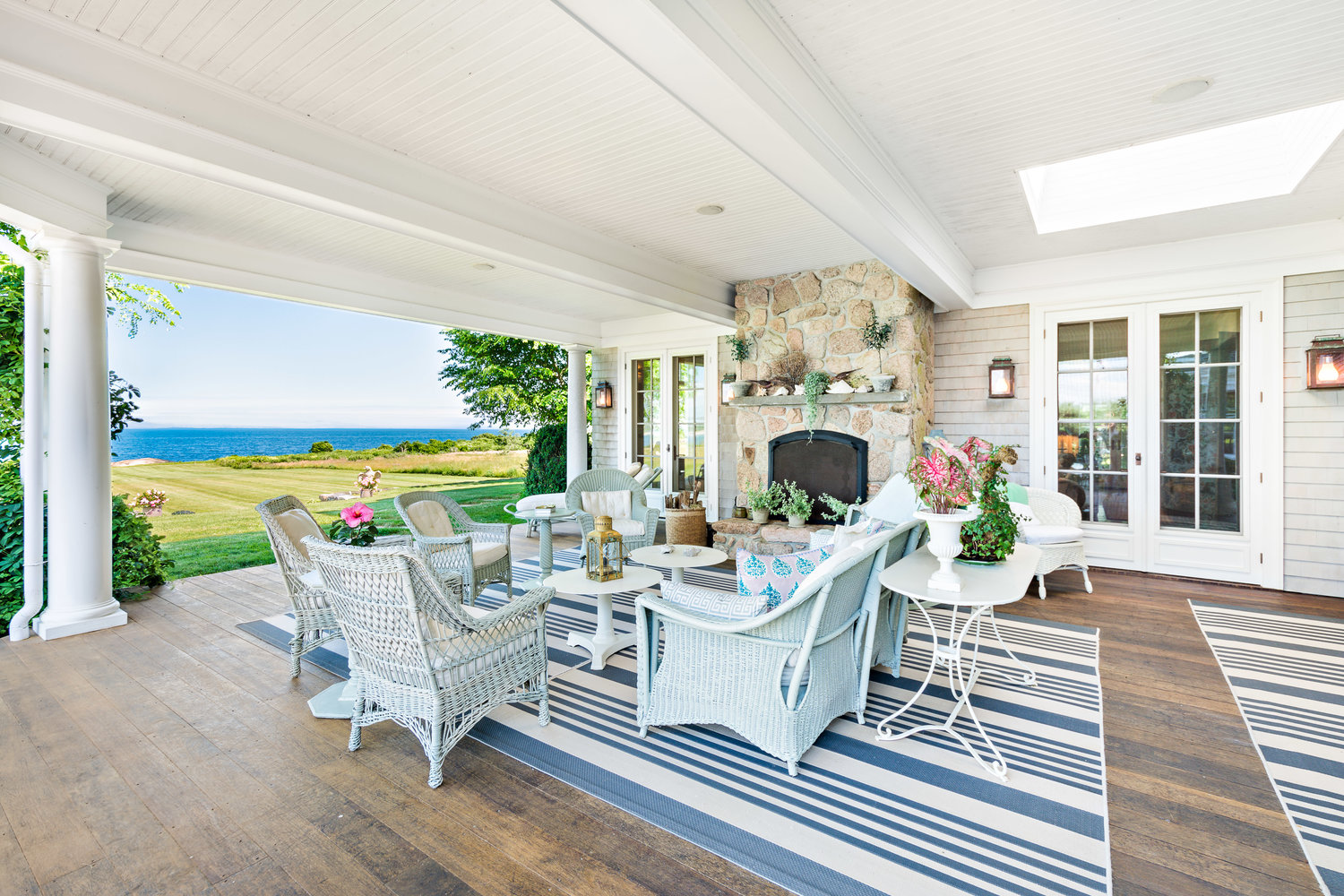 A large open porch with fireplace offers access to the sea breezes and views but shelter from the sun and rain — this is perhaps the sellers’ favorite spot. 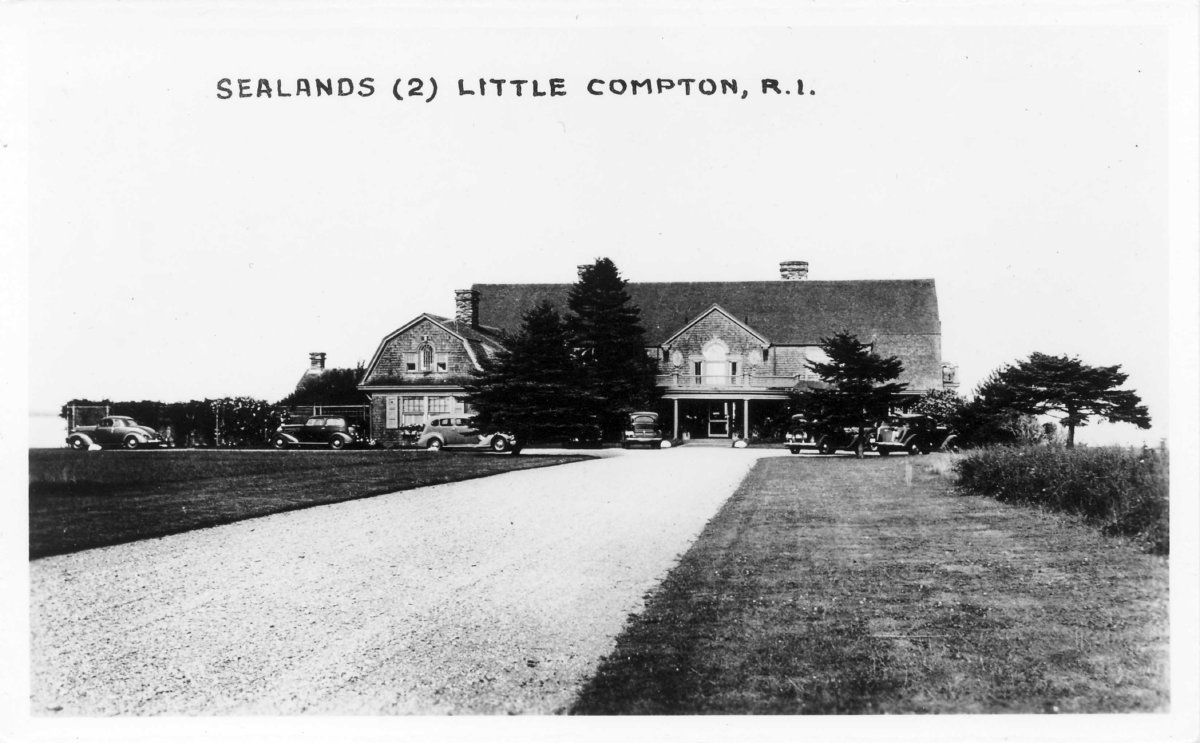 It was among Rhode Island’s grand homes when it was built over century ago, and a much-changed Sealands is every bit as special today.

The 8,018-square-foot house on five oceanfront acres at 82 Warrens Point Road sold recently for $7.3 million, the most expensive Little Compton sale since 2012.

It features five bedrooms, eight baths, patios, gardens, a pool overlooking the sea, and fireplaces crafted from limestone in Bath, England. But, as every owner along the way has said, the views are what sets this place apart.

Virginia Merriman says that the house, which she describes as “not great” when she and her husband bought it in 1983, “was the highest priced house in Rhode Island, but there was no place with such spectacular vistas around … We see far north beyond the beach, the pond and island with hundreds of swans in the summertime and then the beautiful curve of the beach. And looking east on a clear day we see Cuttyhunk in the foreground and then Martha’s Vineyard in the distance and looking south out to sea are the ships and large sailboats.”

The house they found on this magnificent location was but a shadow of what had once been.

At the turn of the century, Eva Kingsley Davis McGowan, “elixir” heiress to the wildly popular and potent Perry Davis’ Pain Killer (concocted and fortified with opium and alcohol by Westport resident Perry Davis), bought 50 acres on the east side of Warrens Point Road, property that included what is known as Philippi’s Beach.

A project of this magnitude was evidently no stretch for Ms. Davis. An 1893 newspaper account of her marriage notes, “Johnny McGowan has married into a share of the fortune that Perry Davis pain killer produced. Eva Kingsley Davis, a granddaughter of the medicine man, is the bride and her income is estimated at $800,000 a year, which must be better than anything that has befallen ‘Johnny’ in his twenty years of small political pickings.”

She hired the renowned New York City architectural firm McKim Mead & White to design her house in just the right elevated spot for the best views and a measure of protection from storms.

“The original Sealands house was larger — much larger than our house now. It had three floors and slept 18 to 20 people. The original servants’ wing is now our children’s bedrooms,” Mrs. Merriman told Cherry Arnold, sales associate for Mott & Chace Sotheby’s International Realty who, with Judy Chace, represented the sellers. Ms. Arnold, who likes to delve into the history of properties she represents, said she got especially caught up in this one.

“As a Little Compton native, I have admired Sealands my whole life.” It is “such a significant and beloved property … a truly treasured Little Compton estate.”

Older residents of town sent the owners pictures and shared stories of “going to dinner parties at her house with a footman behind every seat of every guest. They dined watching the full moon out over the sea through the windows and described how dramatic and elegant is was.”

The property no longer, however, includes that beach. Mrs. McGowan deeded it to Dr. Truesdale, the story goes, when he came to her rescue one night and saved her life. “She was so grateful that she gave him the beach and all the land behind it,” Mrs. Merriman said.

A headline in the April 4, 1931, New York Age newspaper describes what happened to the estate after Mrs. McGowan’s death: “Home Left For Use of Sick and Tired People.” The story explained that she had left the house and remaining property to the Tired and Weary of the Episcopal Church — a restful and beautiful place for retired clergy to live out their lives.

In 1949, the church sold the house to Max Huntoon, aka “the Mayor of Little Compton.”

“He proceeded,” Mrs. Merriman said, “to knock down the main house because, he said, ‘It was too damn big to heat.’ He left just the servants’ wing, which goes east to west, and he added a little living room and a little master bedroom on the second level, and a little card room, and that is what we bought in 1983.”

During his time there, Mr. Huntoon, who had a tree nursery, lined the driveway with black pines, a favorite feature that Mrs. Merriman said “made for a very dramatic drive up to the house.”

One summer, she said her family was contacted by University of Virginia architectural students who had found information about Sealands in the university’s McKim Mead & White archives.

Those archives indicated that the house had been insulated with seaweed and they wondered if they could come look at the walls.” She told them that she doubted that there was much seaweed left in the walls “or I hope not.” Still, seaweed was important in those times — it was written into the deed that others on Warrens Point had the right to cross Mrs. McGowan’s property to gather seaweed.

After the Merrimans bought Sealands, they hired architect Steven Lauren and built the lovely house that stands today.

Their favorite room is the open “Ocean Porch.”

“The view is staggering, and at night we light big fires and sit out there after dinner for hours.”

Sealand is a place of family memories — Swimming off the big rock in the day, collecting lobster pots by kayak, a daughter’s October wedding, the time their son shot his short film that went to Sundance called ‘So Good to See You’ … “We slept the whole crew here and the lead actress, Sienna Miller, arrived and left by helicopter in the front yard.” And they’ll remember the swallows that would migrate to the porch to build nests and lay eggs — they were furious when we came out and put out the porch furniture …”

“It has always been a safe haven for all of us. We will remember a lifetime of happiness here.”