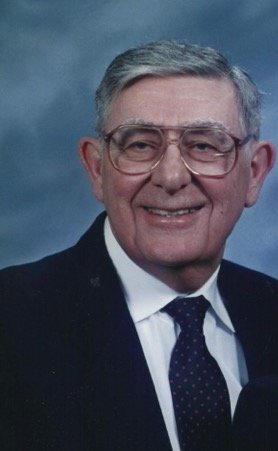 He was then employed by General Mills for the next thirty-six years, in various capacities from “test” baker to the flour/grain manager of the state of California.  With each promotion, Tony moved his family throughout the western United States, until finally settling in Lodi, California, whereupon he retired in 1992.

While employed with General Mills and over the course of 21 years, Tony tenaciously matriculated in evening classes at six colleges and universities, to attain a Bachelor of Science from University of San Francisco in 1979. Concurrently, Tony was active in the California Grain and Feed Exchange and Northern California Grain Exchange, where he served on their Board of Directors from 1972 to 1978 and as President from 1975 to 1977.

Tony was an avid sportsman who loved sports, particularly football and golf. He played on three high school championship teams at Bristol High School, prior to his induction to the Bristol, Rhode Island Sports Hall of Fame in 1989.

Those who knew Tony, knew that he was a giver: He gave his heart, friendship, loyalty, advice, and time to those in need.  As a lifelong learner of wisdom, Tony demonstrated devotion to his community by being a “gallon plus donor” at the Delta Blood Bank, a volunteer “Vacuum Buddy” at the Hutchins Street Square, a volunteer at the Friends of Lodi Library, and faithful parishioner of St. John’s Baptist Episcopal Church.

He was a voracious reader who made it a point to read as many books as possible.  As a faithful American, his favorite holiday was the Fourth of July and he held prolific parties just to light monumental fireworks every year. He not only enjoyed cooking, but he was also especially fond of the art of bread baking. Tony’s bread was famous in his circle of many friends, which was a rather large circle.

As a member the Woodbridge Golf & Country Club, Tony and his beloved wife, Betty, relished in all things “social” in Lodi, especially dancing. If you could dance, Tony was on your dance card.

Other than his family, those who will miss him the most are his friends; because if you were a friend, you were treated like family.

Tony is survived by the love of his life, his wife Betty of 67 years; his son Thomas (Judith) and two sons, Nicholas and Holden; and his son Stephen and two sons, Anthony and Alexander.

Due to the COVID 19, memorial services have not yet been scheduled but will be at St. John's the Baptist Episcopal Church in Lodi, where Tony and Betty were active members since 1972.