A debate over a small piece of land near the town beach has dozens of residents upset and the town's top officials considering legal action.

The debate swirls around a narrow stretch of property … 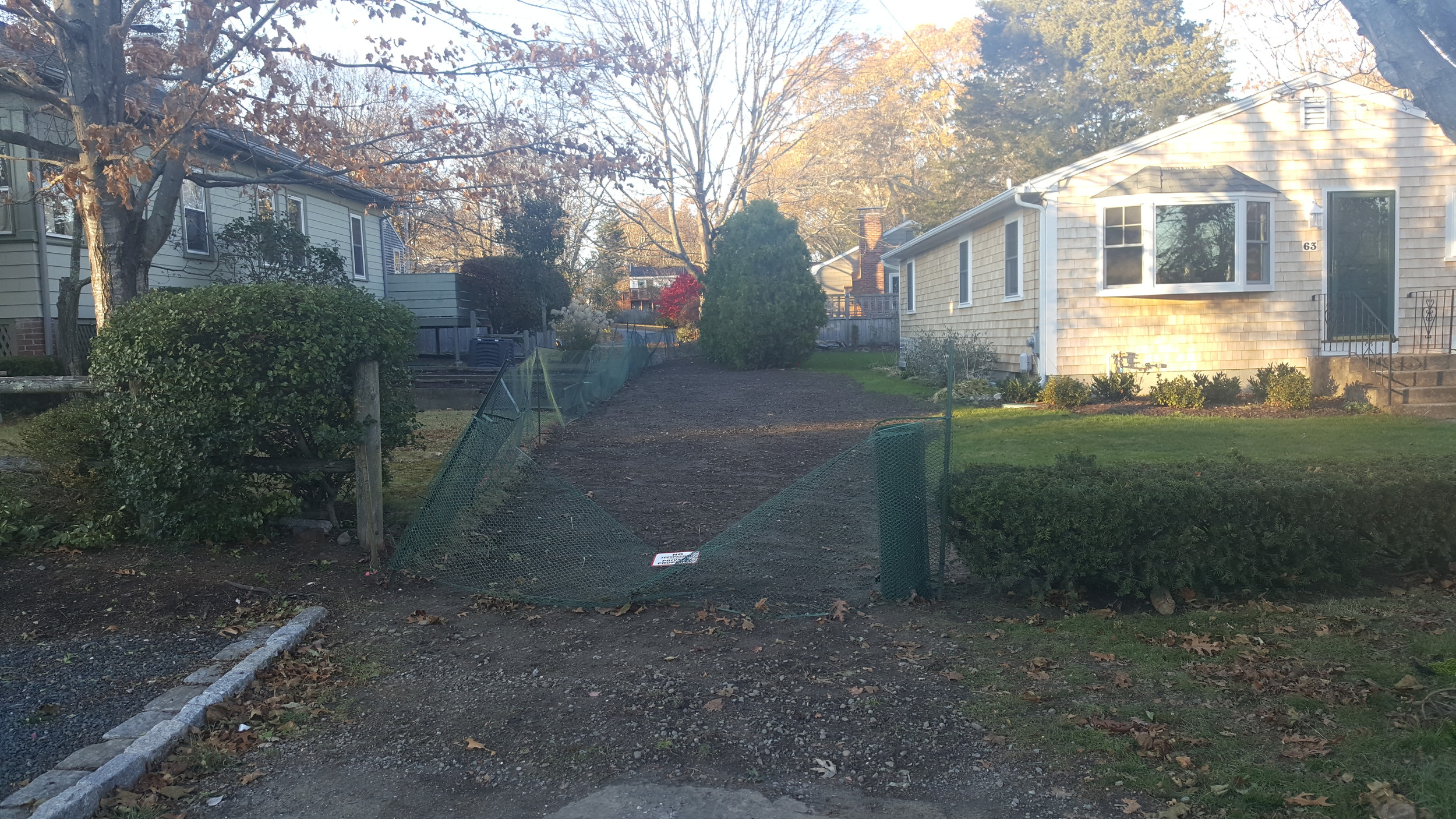 The owner 63 Chachapacassett Road recently covered over a path with topsoil and grass seed and surrounded it with a temporary fence after a survey reportedly showed she owned the land. 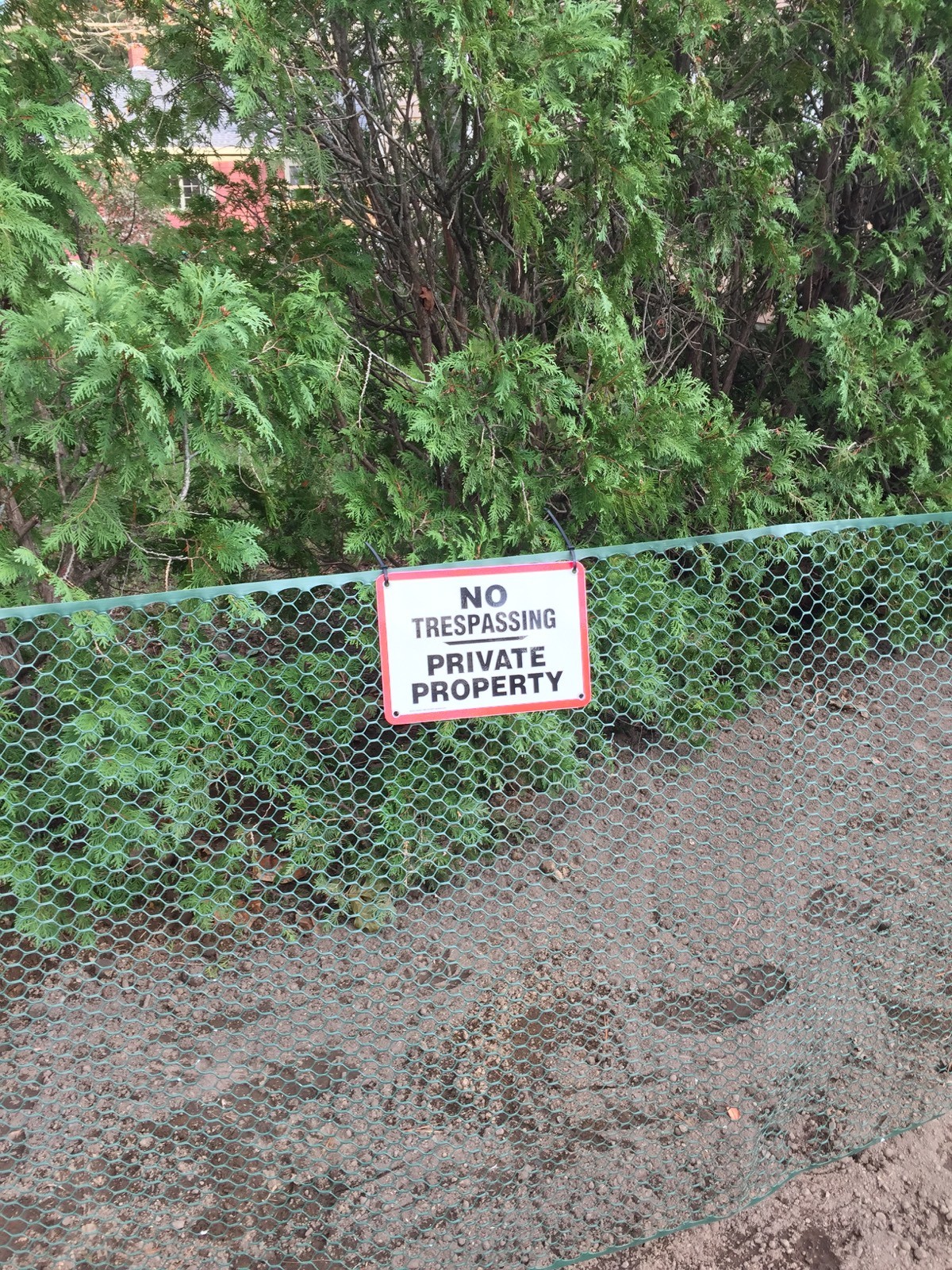 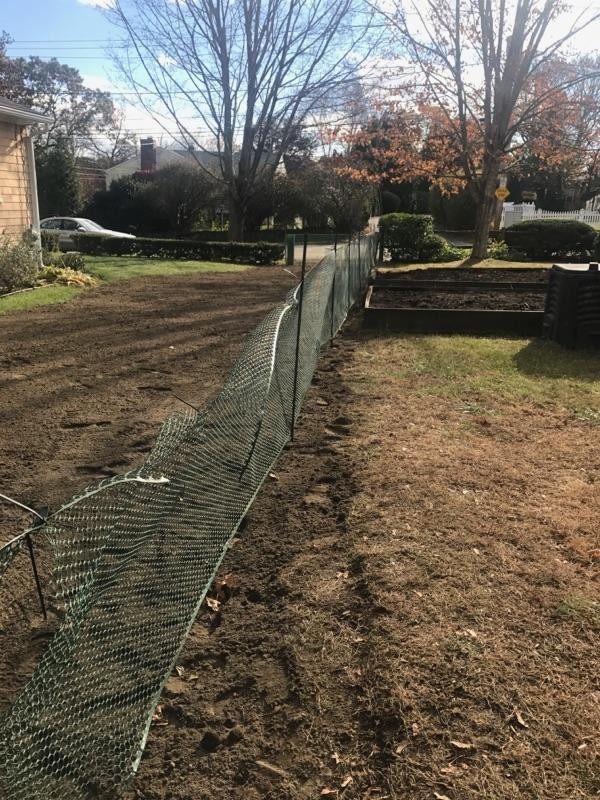 A debate over a small piece of land near the town beach has dozens of residents upset and the town's top officials considering legal action.

The debate swirls around a narrow stretch of property that runs between Fales Avenue and Chachapacassett Road. For decades — at least the last 50 years — the unassuming property had been used as a right-of-way by people walking their dogs, heading to the beach, or by children making their way to and from a school bus stop.

But about a month ago, the new owner of 63 Chachapacassett Road ordered a survey and, according to documents provided by her land surveyor, discovered that the often-used walking path was, in fact, her property.

A further investigation showed that the actual right-of-way appears to carve not through her property, but actually through a neighbor's yard. That land is now filled with a lawn and garden beds. (The owner of 65 Chachapacassett Road, Jean Twomey, did not want to comment for this article.)

Barb Masterson, who owns 63 Chachapacassett Road, received the documents from her surveyor back in September, and has since had her landscaper cover the path with top soil and grass seed, and surround the property with a temporary fence.

"It's just not neighborly," said Pauline Woods, who has lived on Fales Avenue since 1961. "How could she just block it up?

"We bought our home here 56 years ago. It's been a lovely neighborhood. We're neighborly around here. No one's caused any problems (on the right-of-way). If she (Ms. Masterson) were living here, she would want to be neighborly."

Ms. Masterson — she shared copies of land records, emails, and survey documents for this article but did not want to comment — is renting the property to a tenant.

She purchased the Chachapacassett Road home in Sept. 2016 and, for the last year, made a series of improvements to the property. When it came time to build a small retaining wall on the eastern edge of the property — opposite from the right-of-way — she decided to order a survey. That check of the boundary lines reportedly revealed a problem with the current right-of-way: At some point in history, people began using her land as the path and not the actual designated property.

Ms. Masterson spoke with some of the neighbors following the revelation, but eventually settled on filling in the pathway with dirt and grass seed. She considered leaving the path untouched but was advised by her attorney to do otherwise. She initially had boulders placed along the land, but later had them removed and encircled the property with a temporary fence.

That move did not sit well with neighbors.

"We're all very upset about this," said Deborah Thomas, who lives in the neighborhood. "I live three doors down from the right-of-way. I've been using it for 30 years.

"This is not what a good neighbor would do."

"I was absolutely blind-sided by this," she said. When it was blocked off "it changed the whole character of the neighborhood. That (right-of-way) connects people who live on Fales and Chachapacassett and beyond."

"I find it disheartening that someone would purchase a piece of property in the neighborhood — a neighborhood where many of us have lived for years and in which we have raised children — and even after being informed that this paper road has been used for decades by residents and schoolchildren to access Chachapacassett from Fales, block it off in a most un-neighborly fashion," she said.

Ms. Masterson's decision to cover over the path followed the advice of her attorney. As the apparent rightful owner of the land, Ms. Masterson has been paying taxes on the property and could reportedly be held responsible if something were to happen to someone when they were using her land as the cut-through.

Ms. Masterson reportedly has plans to remove the temporary fence once the grass seed takes root and the lawn has filled in, but that might take a little while longer than she initially planned — recently she discovered that someone poured rock salt all over the newly spread grass seed. Whoever tried to spoil the seed also left the empty bag staked to the fence as evidence.

Police have stopped by the property on a few occasions, and officers responded to the home again after the rock salt incident. Police have advised Ms. Masterson to install cameras on her property, but she reportedly does not want to do that.

The apparent act of vandalism runs counter to what many residents in that area say is the norm for that neighborhood. They say people stop and talk with each other, they know each other by name and feel a certain connectedness.

But the changes to the former path have left some folks feeling unsettled.

Barrington Town Manager Jim Cunha and town attorneys are taking a closer look at the property dispute. Mr. Cunha said he shared information about the situation with Barrington's solicitor.

"There appears to be some discrepancy between the plat maps and the deeds," he said. "If we discover it is a town property or a right of way, we will certainly become involved (legally).

According to documents provided by Ms. Masterson, the developer of the land along Fales Avenue and Chachapacassett Road was Barrington Land Company. The property was called Fales Homestead, and the developer was careful to include a 10-foot right-of-way between 63 and 65 Chachapacassett.

And while the right-of-way appears to run not through Ms. Masterson's property but instead just west of her property, there is an easement that runs through her land and appears to follow the old pathway. According to property documents, a private easement was granted to two neighbors on Fales Avenue.

While it is not yet clear if the town will become involved in the property dispute, some neighbors are hoping things can return to how they used to be.

Ms. Thomas said she hopes that people can strike a compromise.

"I would like to see the fence removed," she said. "Or maybe they could move it back a few feet so the kids can get to the bus stop.

"Can't we do something here that makes everyone happy?"