BHS graduate is a stand-out at Salve

Ever since she was a freshman, Barrington’s Maddie Cox has skated as one of Salve Regina University’s front-line defenders.

BHS graduate is a stand-out at Salve 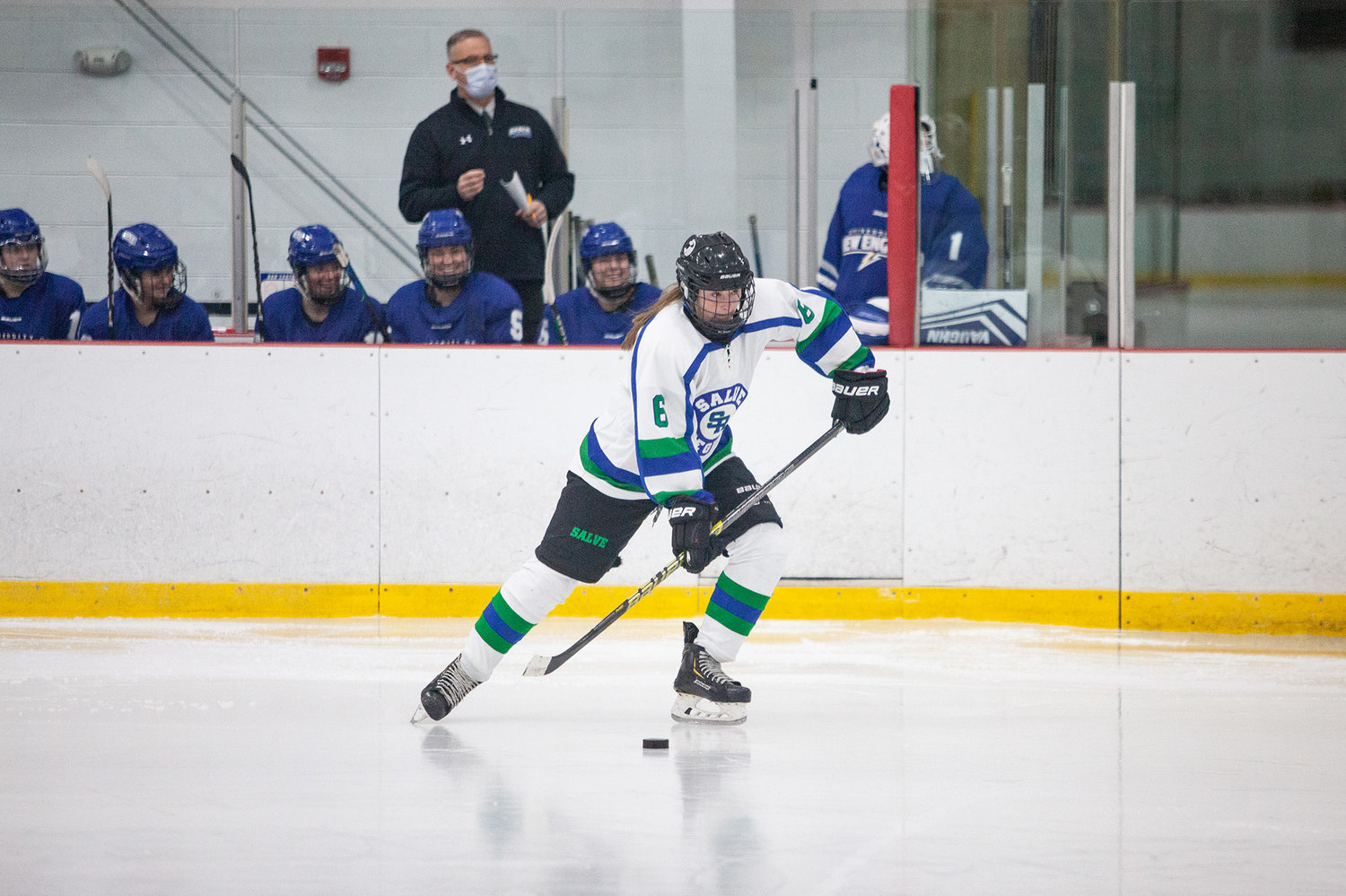 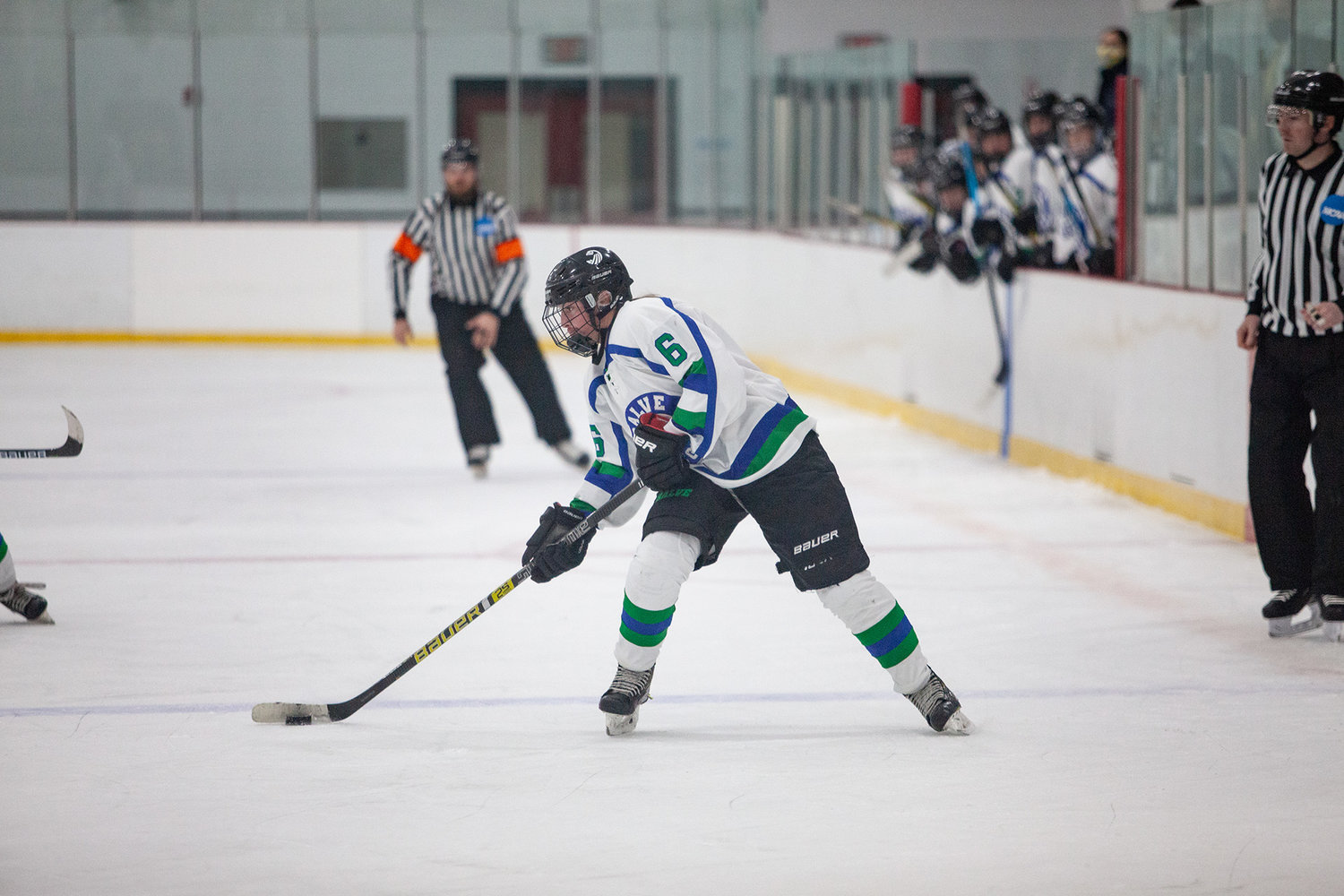 Maddie Cox, a former standout for the East Bay Co-op Girls Hockey team, looks to pass the puck to a teammate during a Salve Regina hockey game.
Photos courtesy George Corrigan
Previous Next
Posted Friday, April 8, 2022 10:18 am
BY MIKE SCANDURA

Ever since she was a freshman, Barrington’s Maddie Cox has skated as one of Salve Regina University’s front-line defenders.

“In terms of how Maddie positions herself she’s a top ‘D’,” said Salve coach David Lun. “She’s a starter for a good reason in order to get the maximum amount of ice time.

“As long as I’ve been here she’s proven her ability as one of our top ‘D.”

In many cases regardless of sport, freshmen spend more time on the bench than on the ice.

“I was a little surprised,” said Cox, who recently wrapped up her junior season. “It meant a lot that the coach had trust in me. The upperclassmen were amazing and super supportive.”

Cox was a standout for the East Bay Co-op Girls Hockey team. In her season, her father, Michael, stepped in to coach the team.

“He came in my senior year which was amazing,” said Cox. “He coached me a lot growing up, especially during youth hockey. He was harder on me being his daughter and didn’t play favorites.

“He wanted me to be the best I could be and pushed me harder.”

Whether a son or daughter plays for a father or mother that can be an unenviable situation.

“There were times where there was some bickering,” Cox said. “But it meant a lot more to me knowing he was on the bench.”

Lun could tell when Cox first stepped on the ice that she benefitted from playing for her father.

“I think that definitely had an affect on her knowledge” said Lun. ”Having had that tutelage helps but coming from her father she may listen a little bit more or less. Having her father as a coach can give her some insight, more than she might get in a 1 ½ hour practice.

“He can help her understand the details of the game which she seems to have which reflects her ability on the ice. Having that tutelage gives you a little bit of an edge on the competition.”

Through the first 21 games of this season Cox scored three goals and assisted on two and for her career she’s posted 9-9-18 totals.

At face value that would indicate that Cox is more of a defensive defender as opposed to a defender who leads a rush up the ice.

Lun doesn’t buy into that analysis.

“Maddie has a very high offensive upside,” said Lun. “Although we haven’t scored as much as a team, her points reflect one of our higher totals as far as defenders go.

“In terms of her game, she’s a strong two-way player. We use her on penalty kills, defensive draws and obviously we use her heavily on the power play and on face-offs. We like her for her offensive and defensive game.”

Just as important is the fact Cox does a good job of staying out of the penalty box.

In her first 49 career games Cox has been assessed only 14 minutes in penalties (all minors).

“We’re fortunate enough this year in that we’re an infrequently penalized team,” said Lun. “Maddie is a good skater and understands body positioning. She can be a defensive force and not jeopardize our game plan.

“Her ability allows her to play within the rules.”

Cox wasn’t inclined to disagree with her coach but she offered a different slant on what she brings to the team.

“I’m very conservative and defensive minded,” she said. “I want to make simple and safe plays. I haven’t always been the best skate but I have a good shot.

“I have good hockey sense.”

Which in many cases isn’t something that can be ingrained in a player.

Just like Cox’s father helped her in high school so has Lun at Salve.

“Coach Lun has been a great addition to Salve,” she said. “He knows what he’s talking about whether it’s hockey skills or life skills.

“He’s been super supportive with everything that’s going on.”

The respect Cox has from her teammates is underscored by the fact she was voted a captain by the latter and not by the coaches.

“She was voted in by her peers,” said Lun. “I wanted the girls to vote on a couple of names who would be good representatives of the program.

“She was well received … I felt Maddie, with her game, leadership and place on the ice was a well-suited candidate for a captaincy.”

What doesn’t show up on a hockey stat sheet is what Cox has accomplished in the classroom.

“Obviously the accolades speak for themselves,” said Lun. “She does a good job managing her time on and off the ice. She takes her academics seriously.

“That’s another reason why she was voted by her peers to be a voice in the locker room as well as on and off the ice.”

Since Salve has high academic standards, Cox admitted that before she enrolled at the university she couldn’t just sit in a classroom and take up space.

“I think the key has been time management,” she said. “In high school I played three sports. I managed my time between sports.

“At a young age I learned how to do that. The teachers at Salve and Barrington High have been very supportive.”