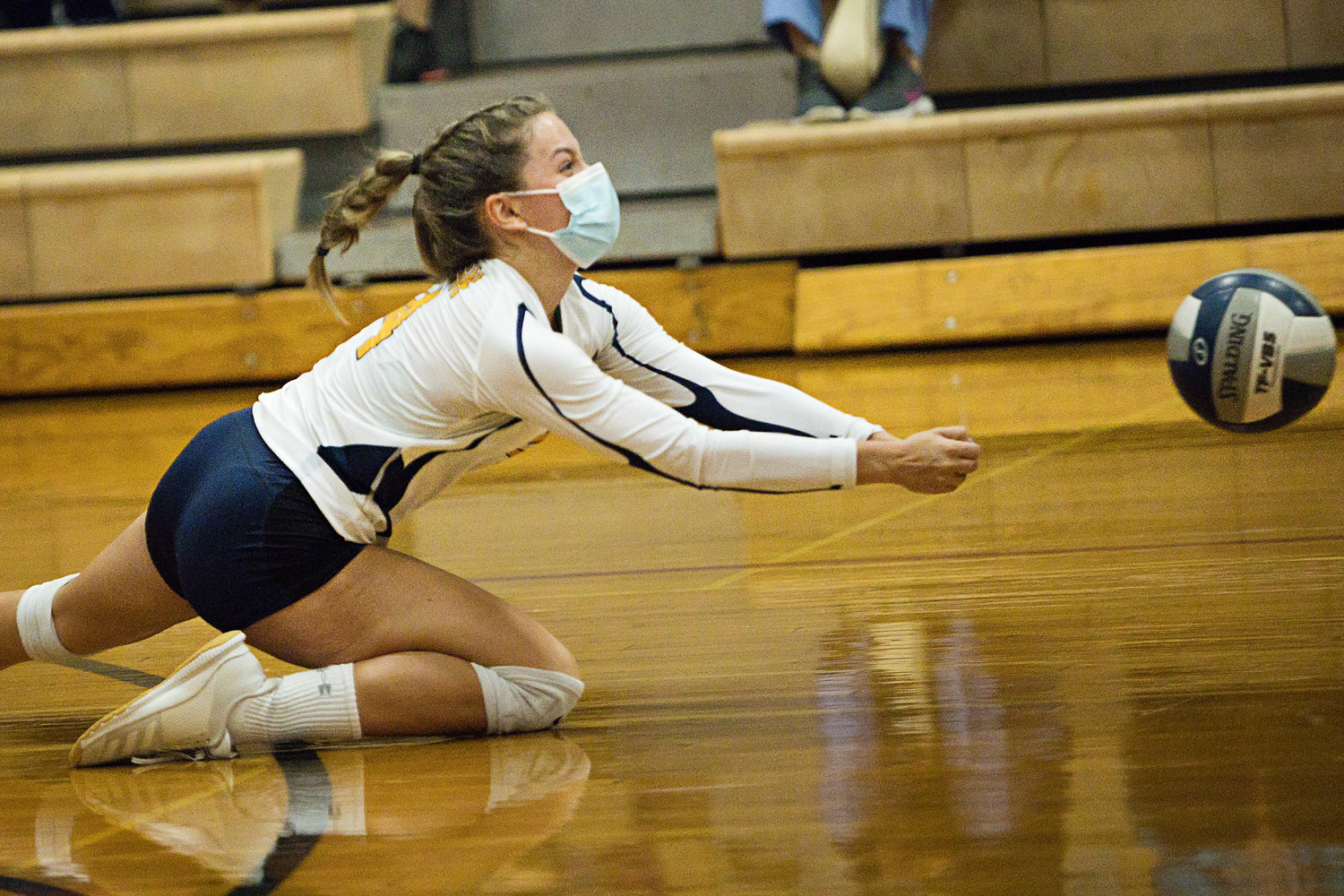 Tessa Sullivan dives for the ball during Monday's match, against Rogers.
Photo by Julie Furtado 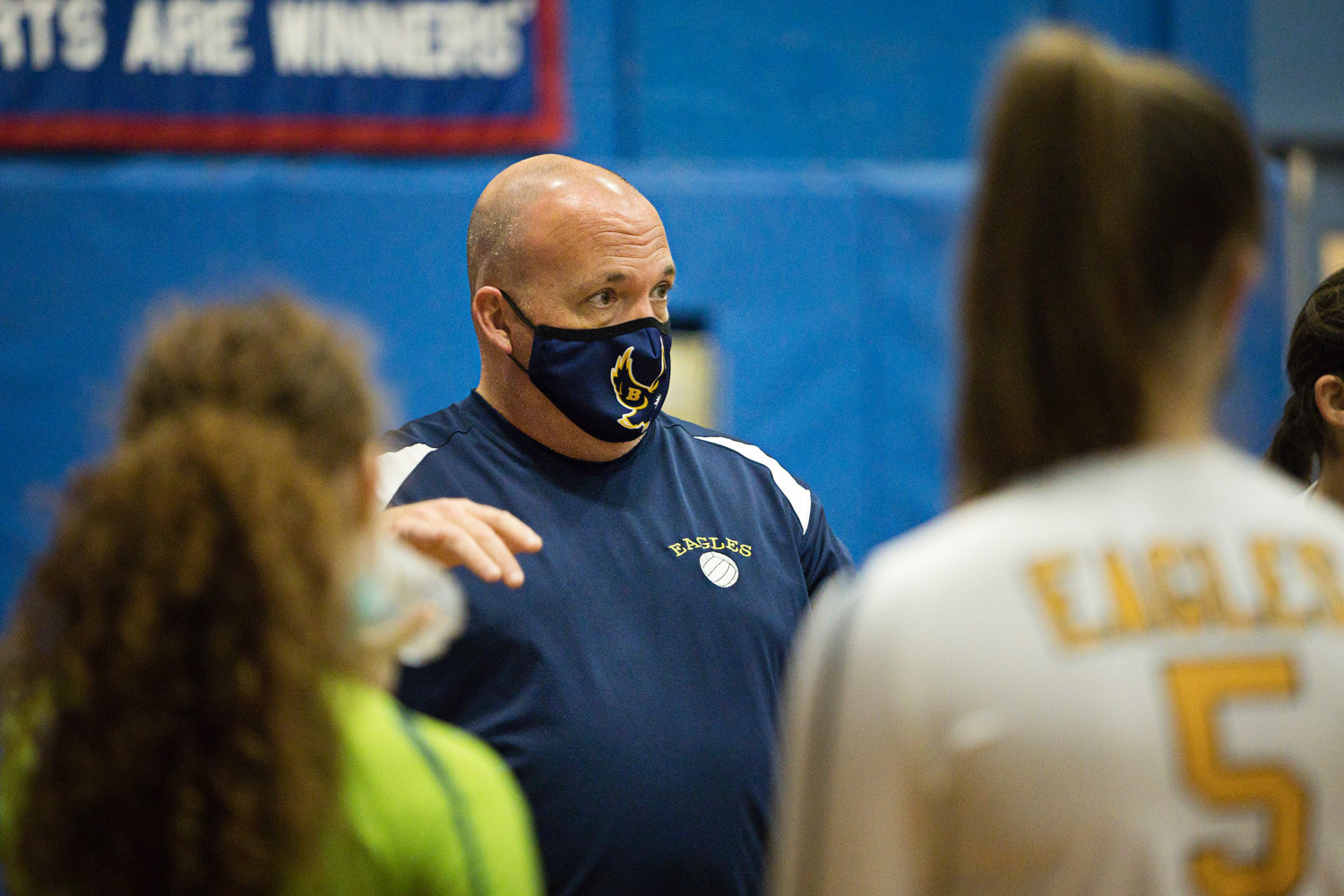 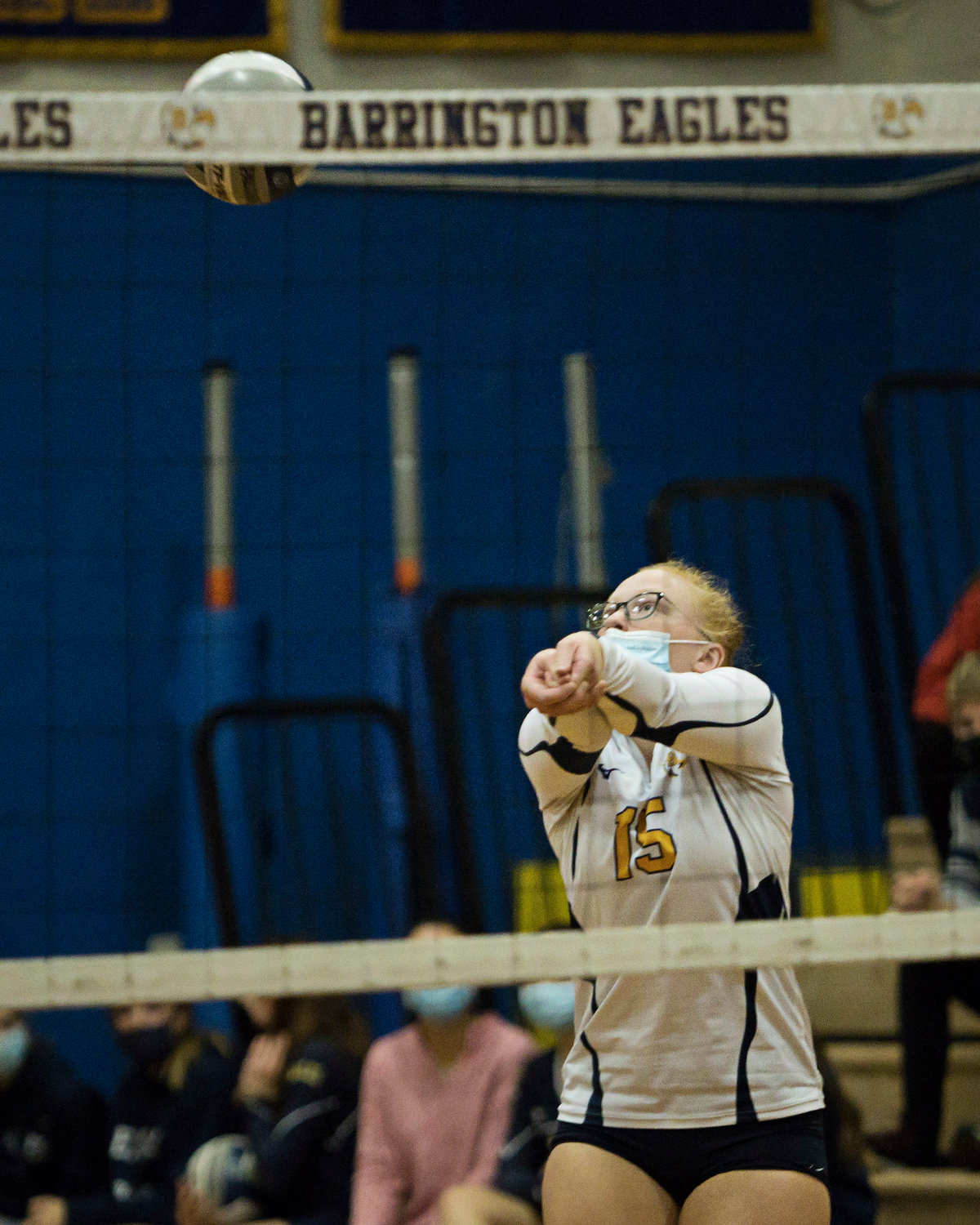 Nellie Peecher bumps the ball up for a teammate while competing against Rogers, Monday.
Photo by Julie Furtado 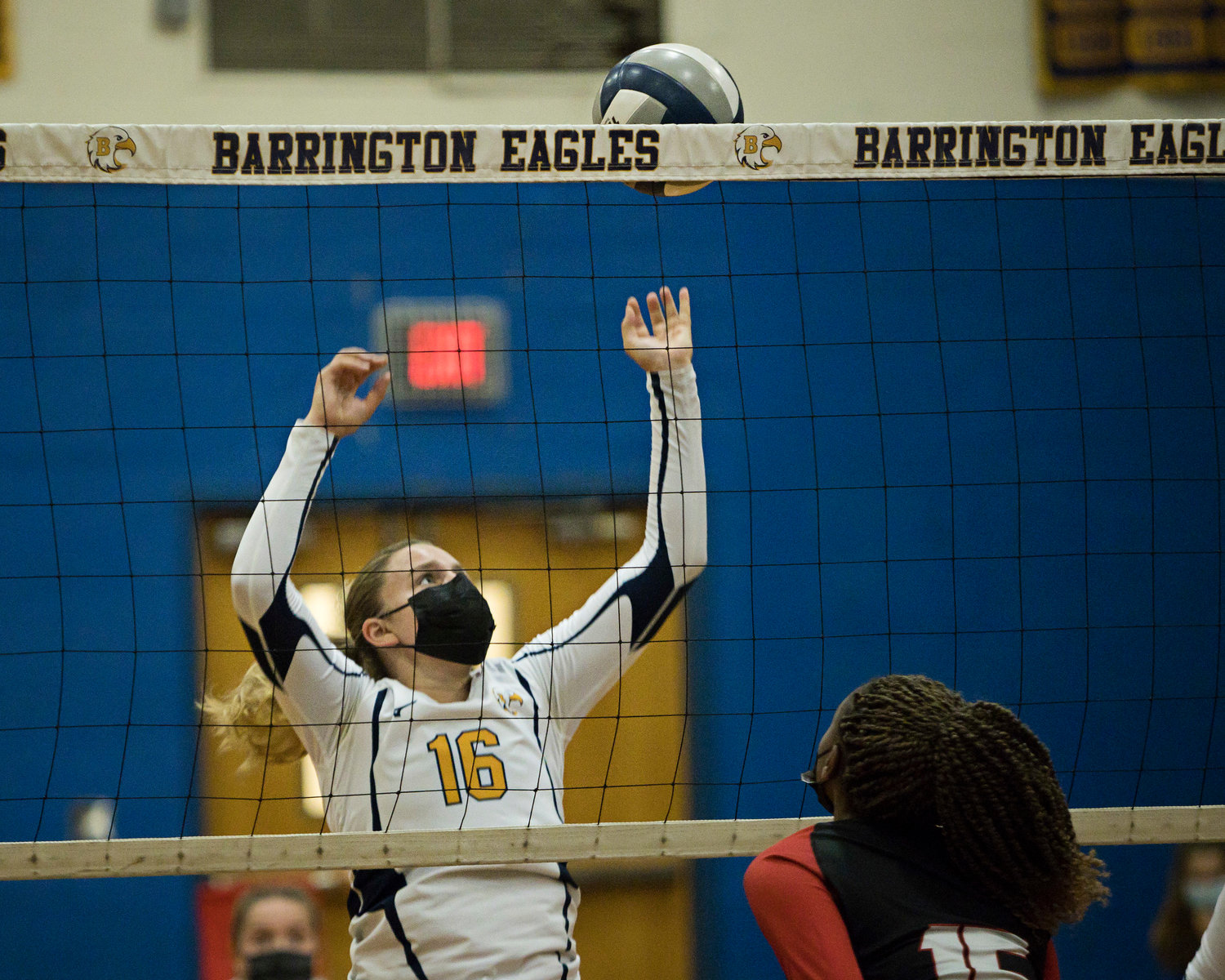 Michaela Baer attempts to block the ball from coming back over the net.
Photo by Julie Furtado 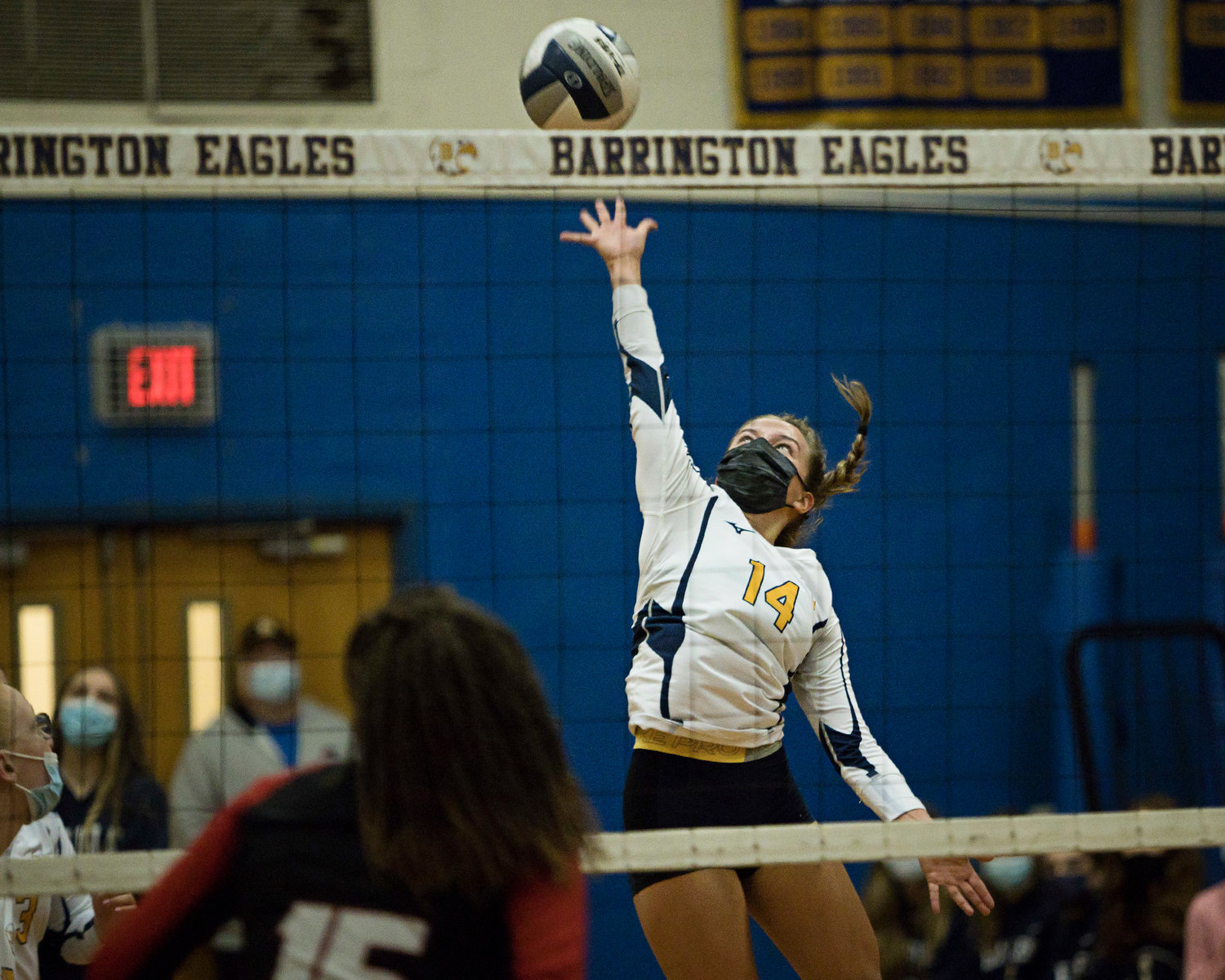 Tessa Sullivan spikes the ball over the net while rallying with Rogers, Monday night.
Photo by Julie Furtado 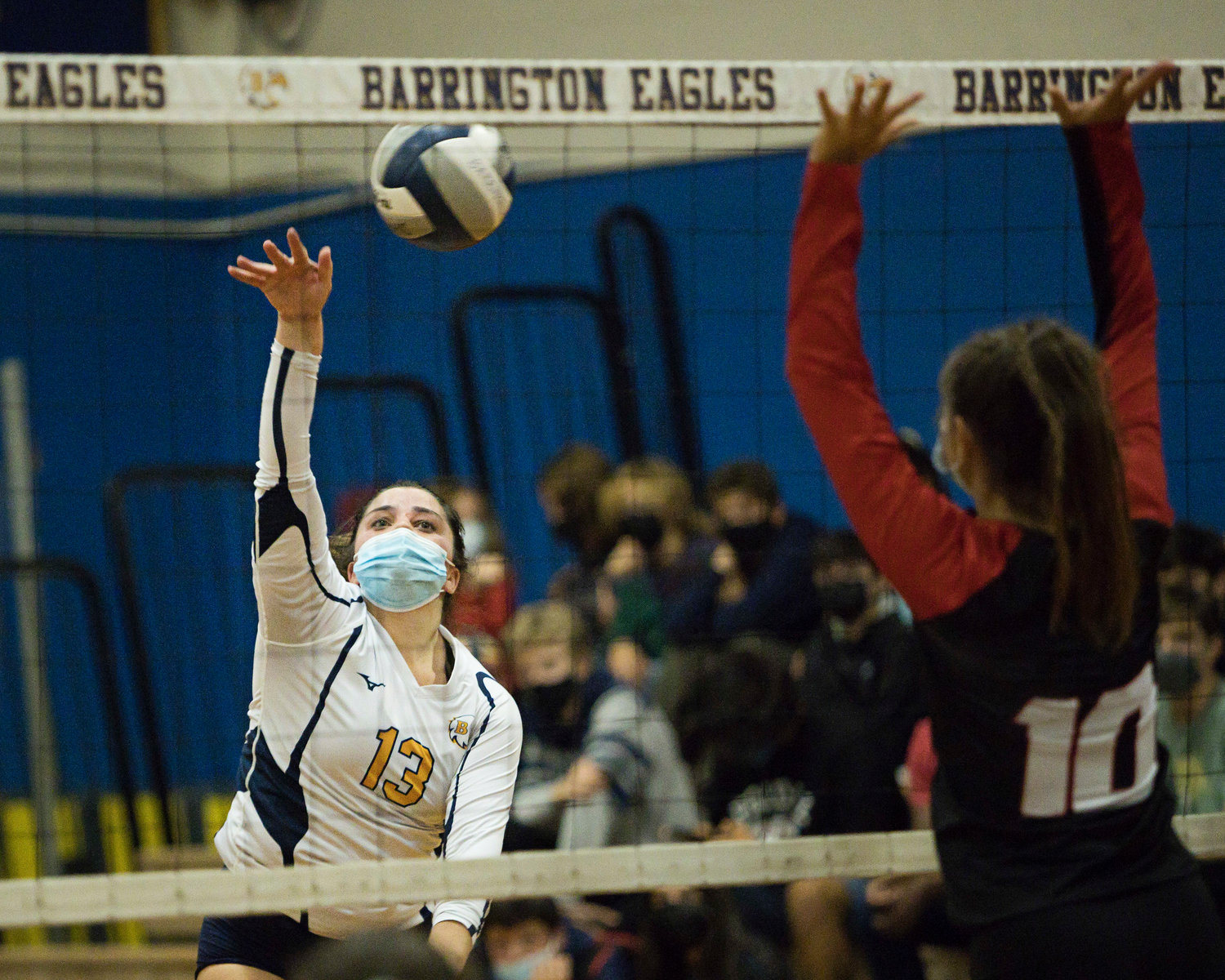 Ally Pfeffer sends the ball back toward the Rogers side of the net.
Photo by Julie Furtado 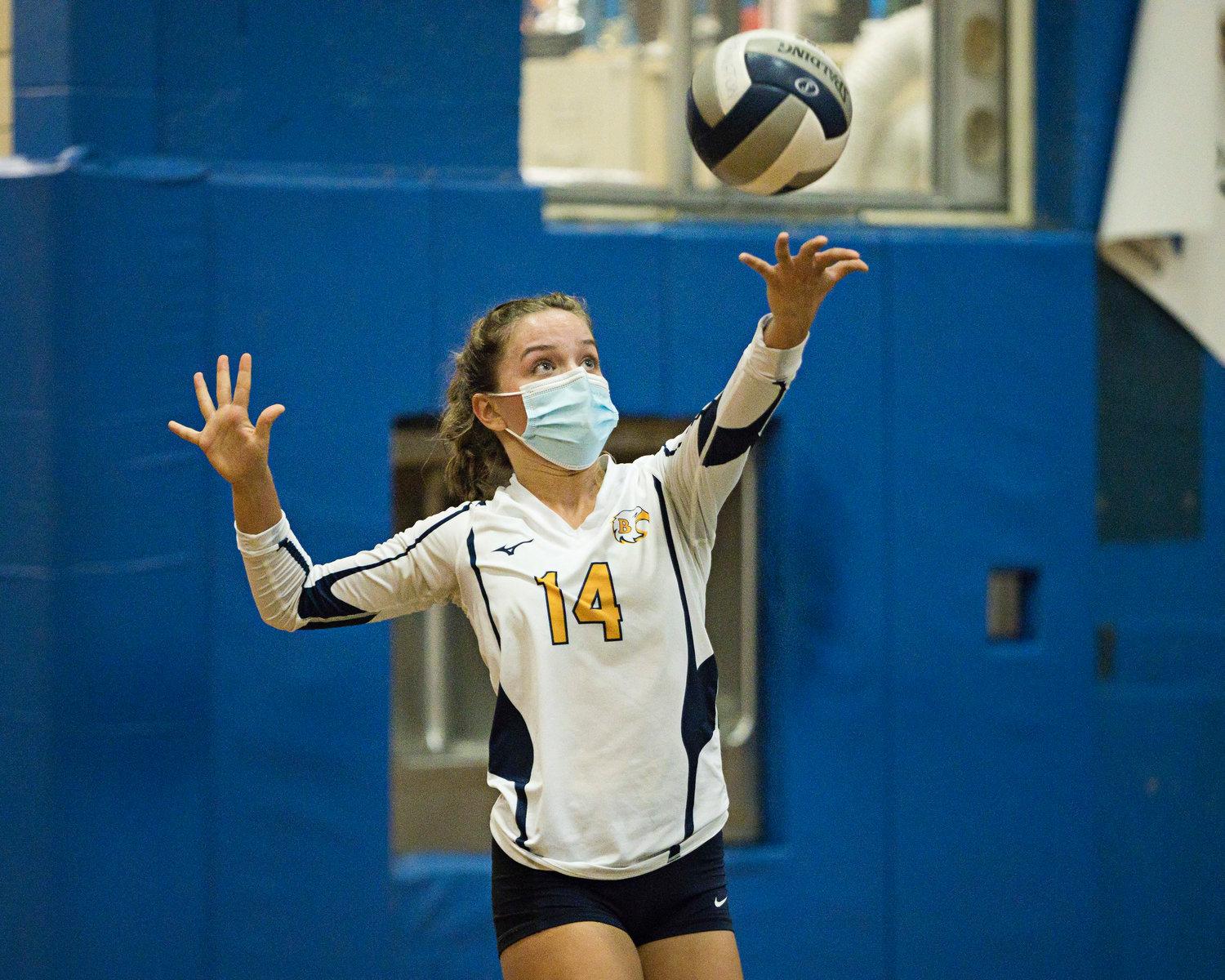 Tessa Sullivan serves the ball during the second set of Monday's match, against Rogers.
Photo by Julie Furtado 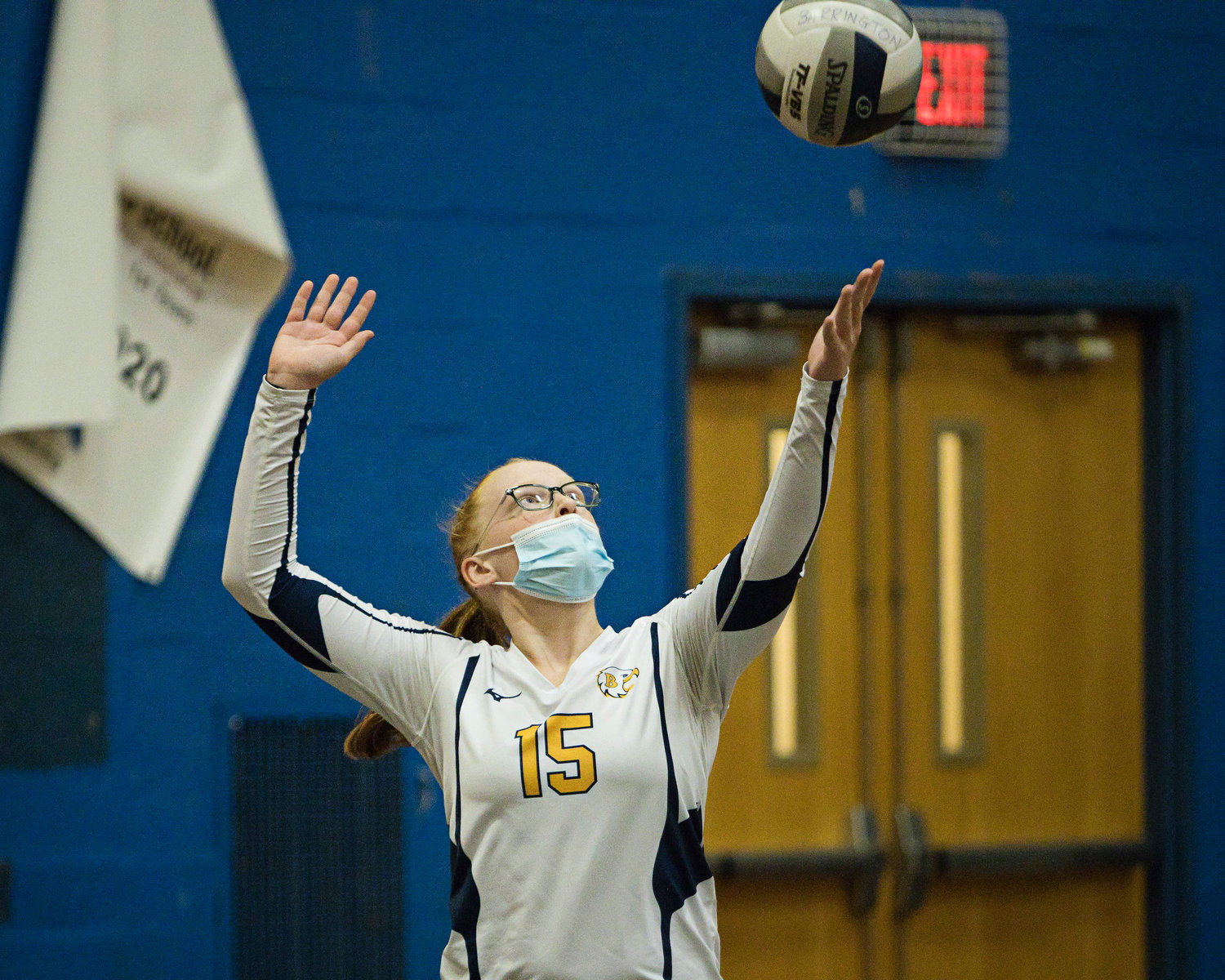 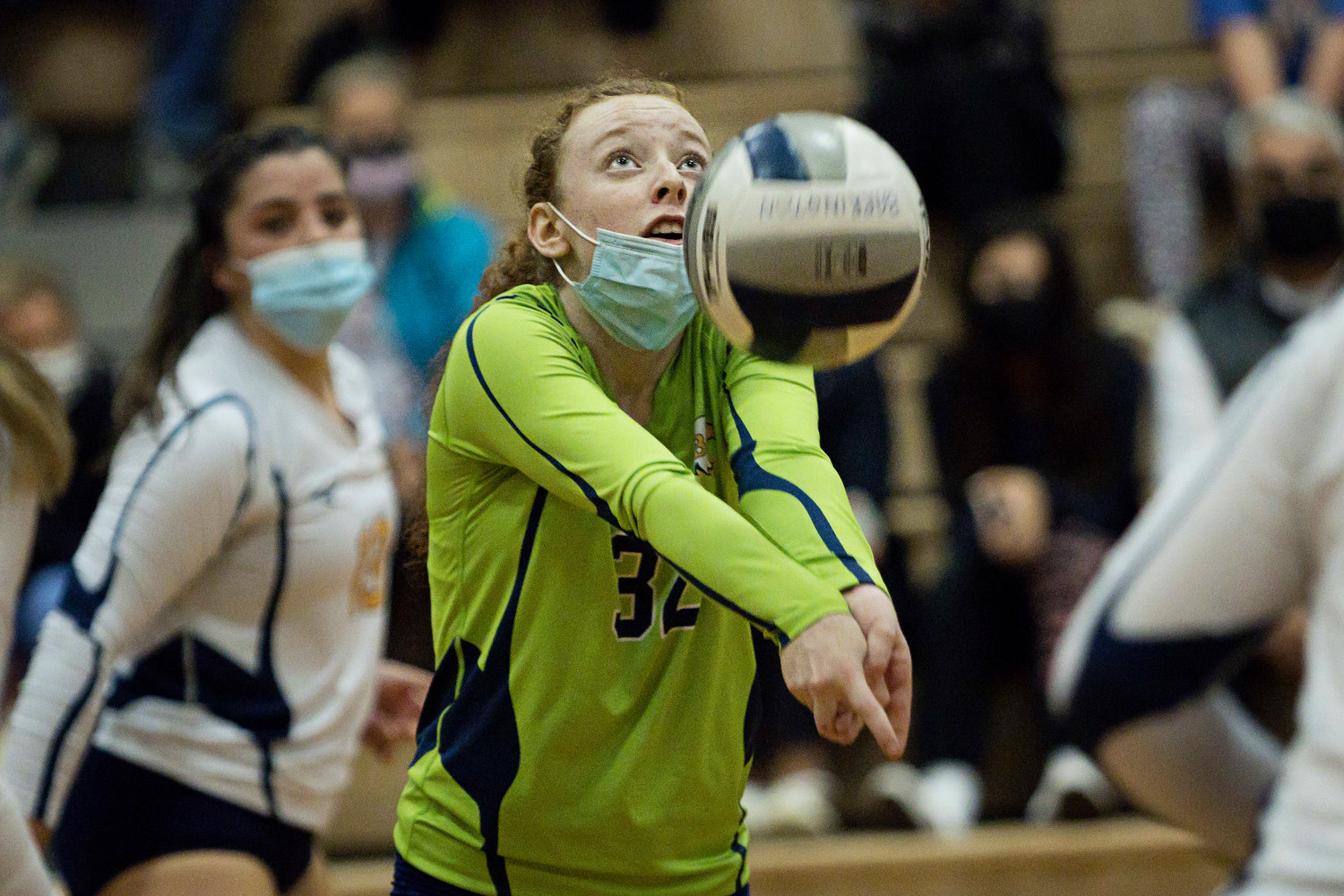 Morgan Martin bumps the ball up for a teammate while rallying with Rogers, Monday night.
Photo by Julie Furtado

Sophie Richardson battles for possession of the ball.
Photo by Julie Furtado 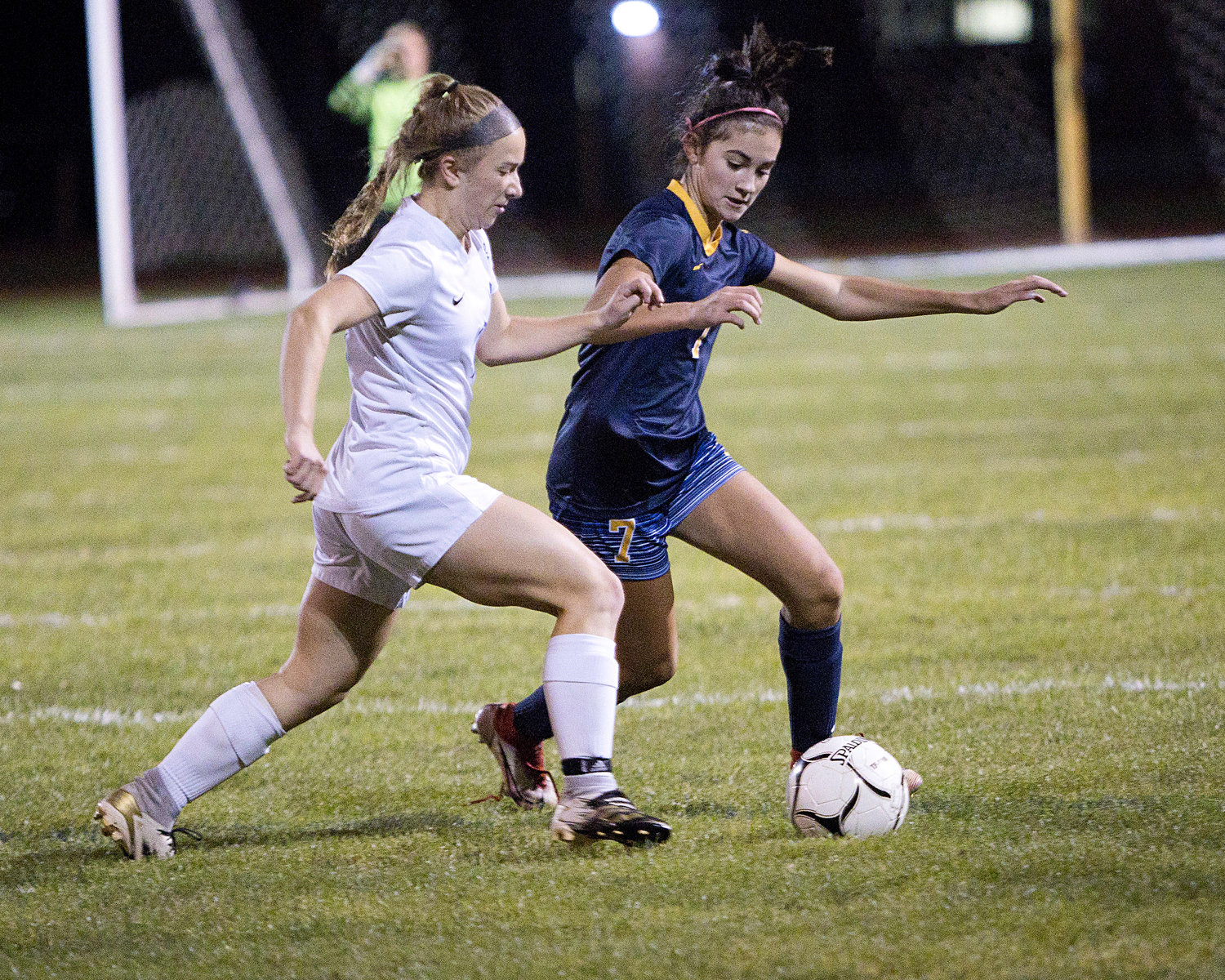 Hannah Carlotto is pressured by a Cumberland opponent.
Photo by Julie Furtado 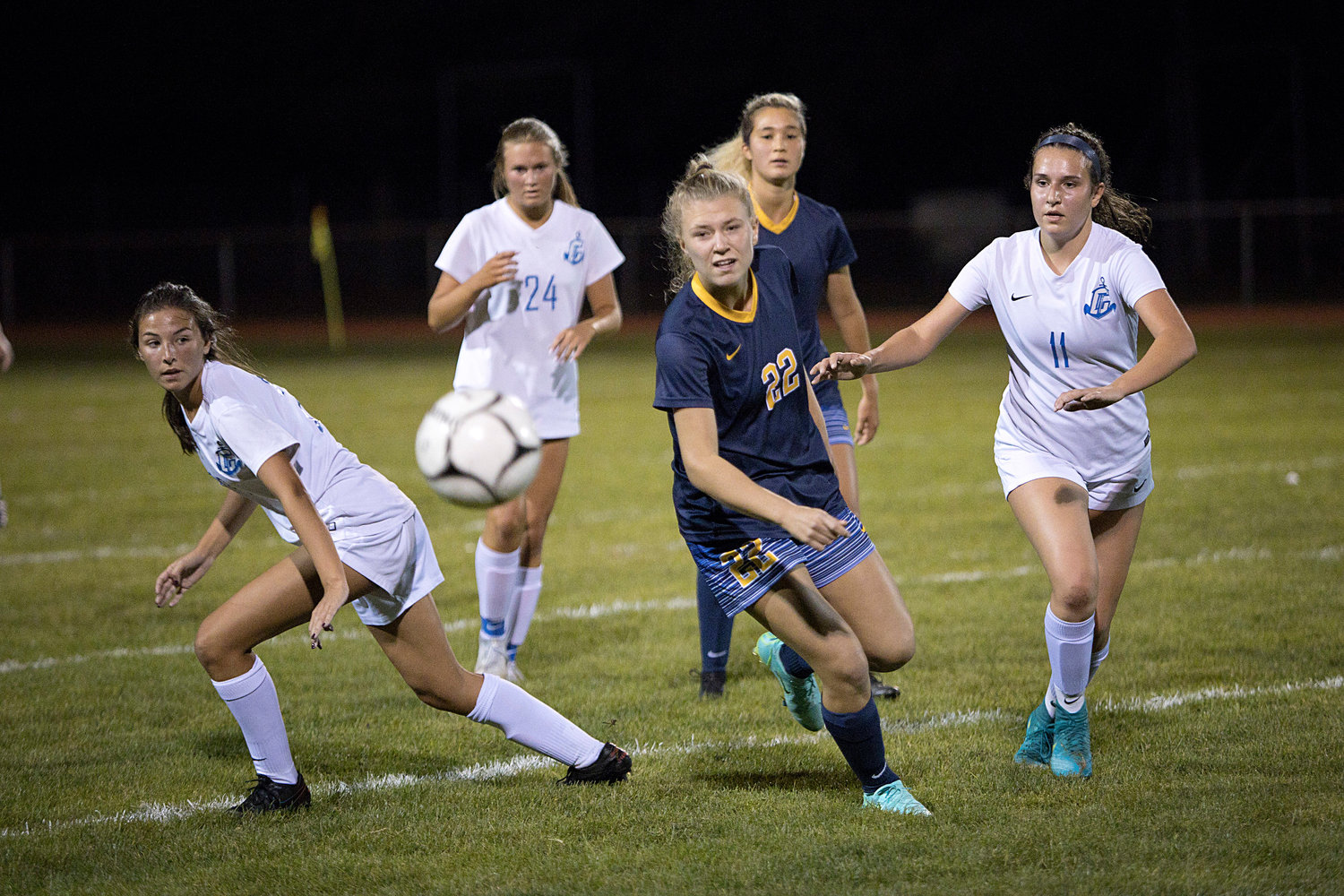 Frannie Johnson races toward a pass during Friday's game, against Cumberland.
Photo by Julie Furtado 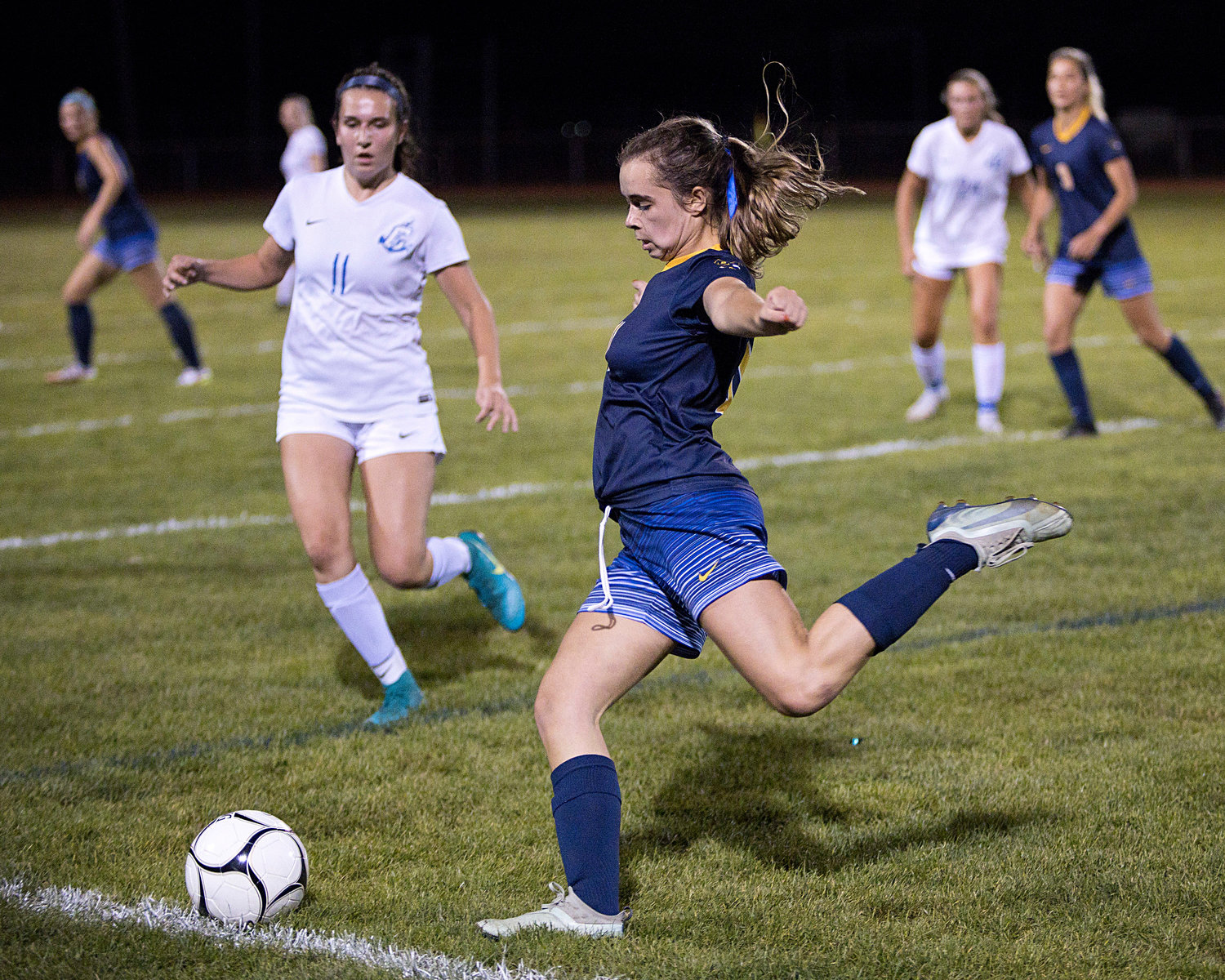 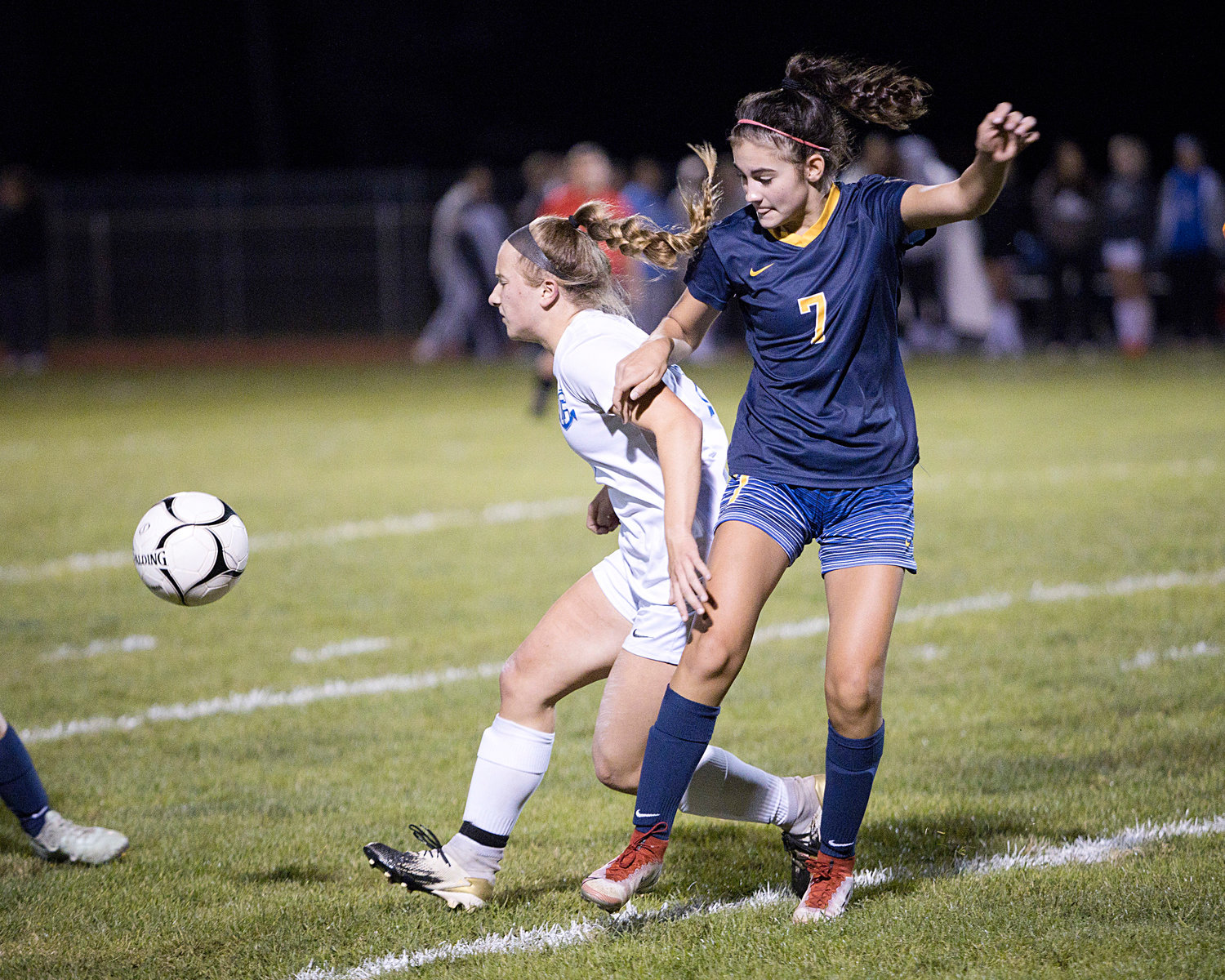 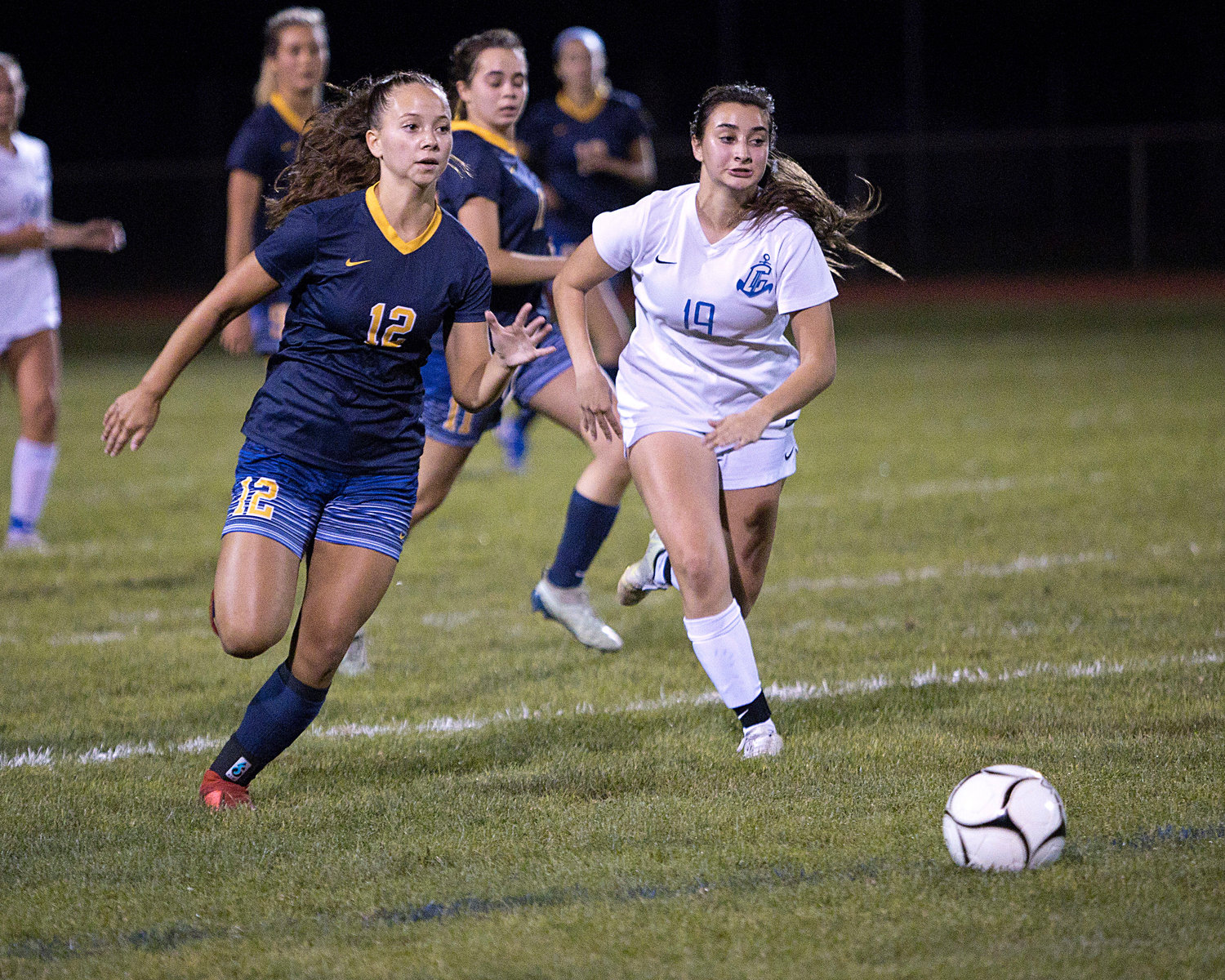 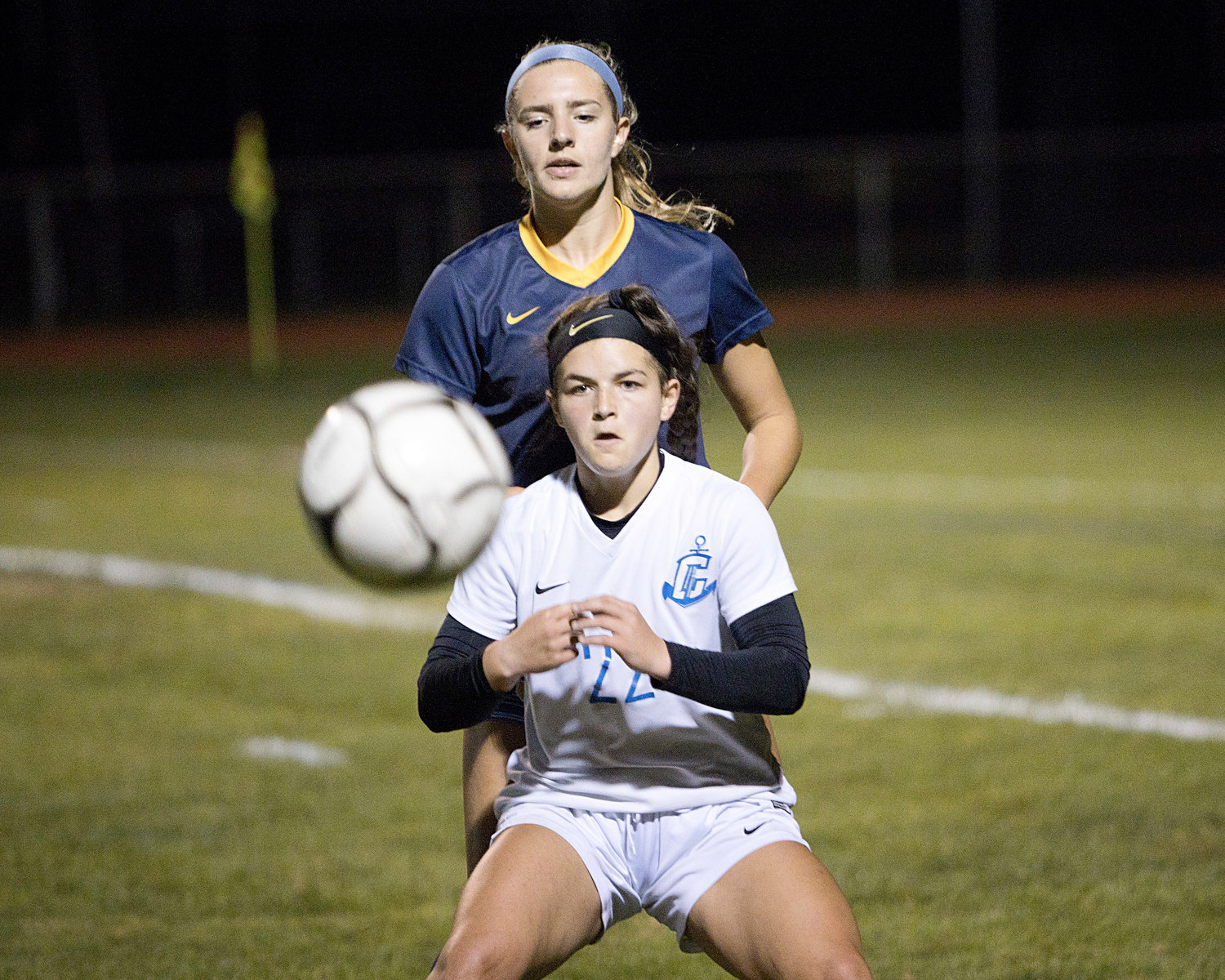 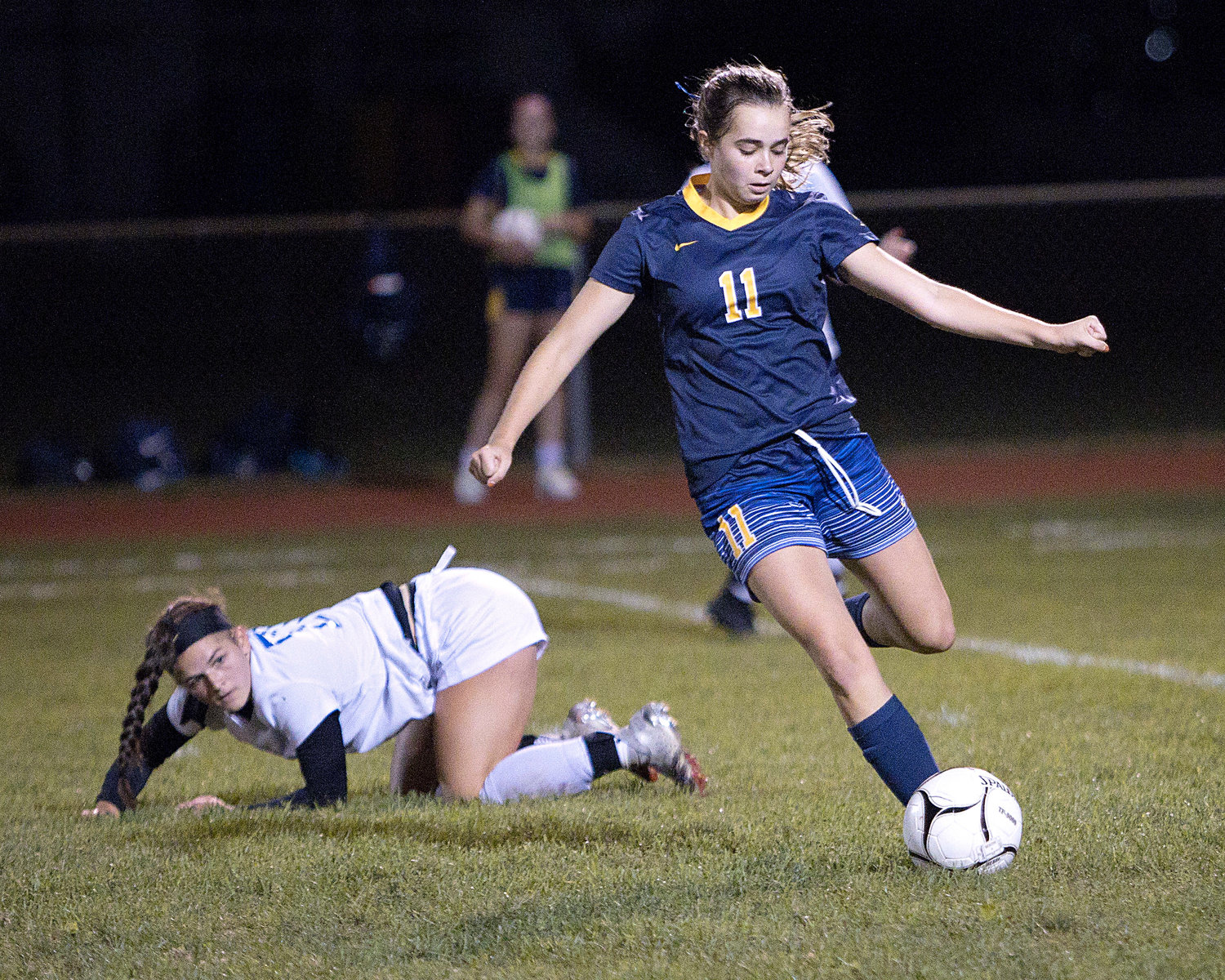 Ella Abadi sends a pass across mid-field during Friday's game against Cumberland.
Photo by Julie Furtado 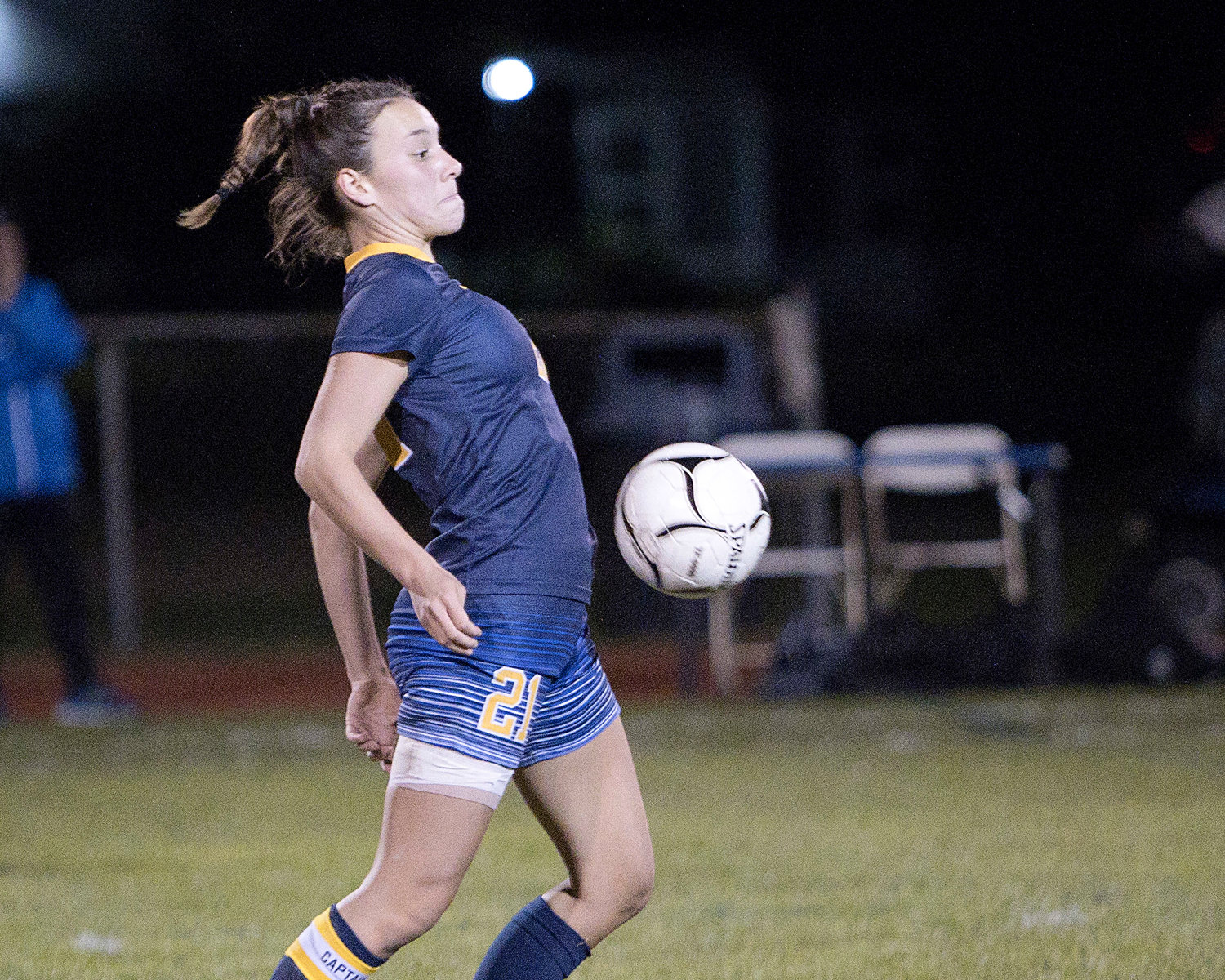 Sarah Yee controls a pass at mid-field while competing against Cumberland, Friday.
Photo by Julie Furtado 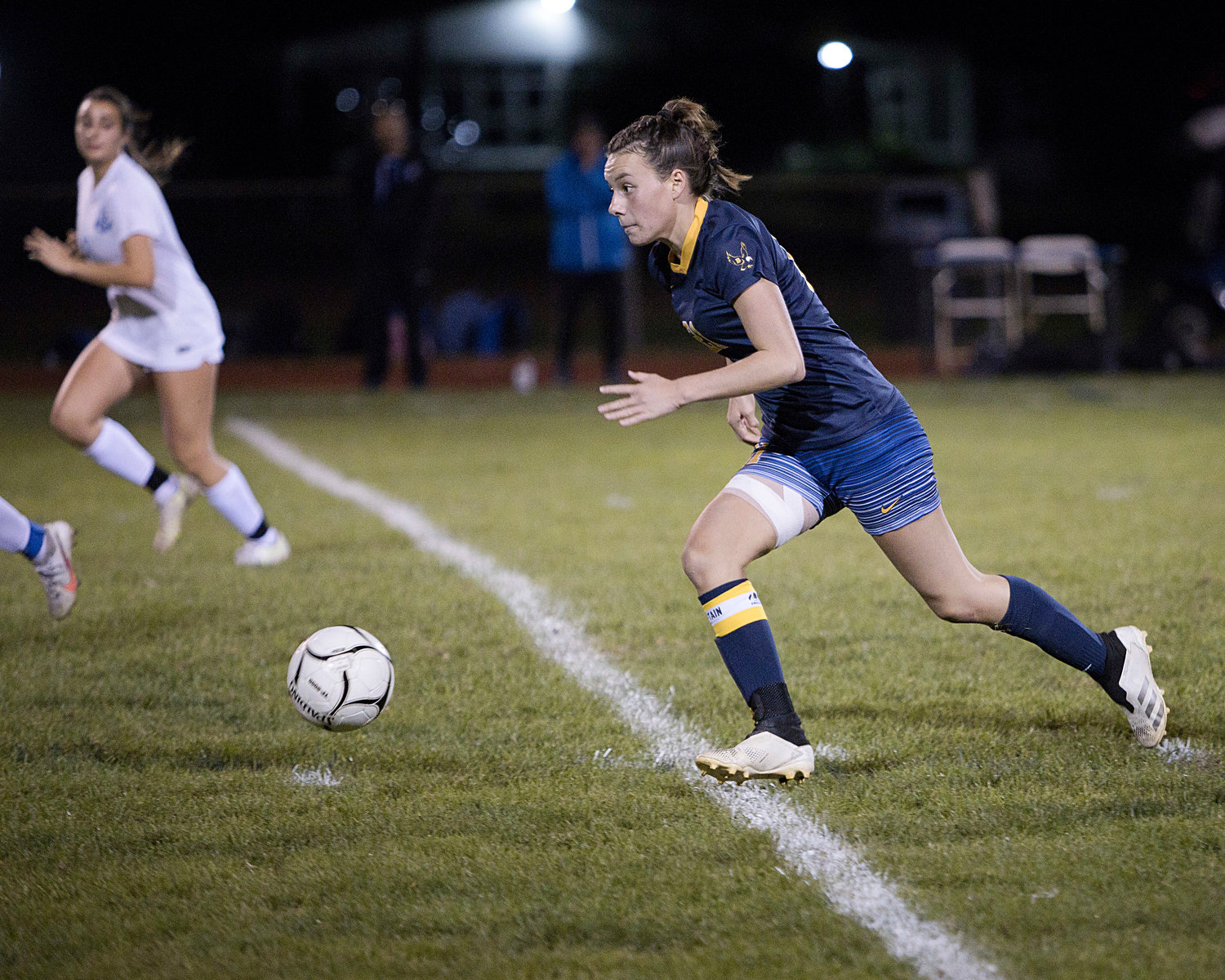 Sarah Yee races the ball toward the net during the first half of Friday's game, against Cumberland.
Photo by Julie Furtado
Previous Next
Posted Wednesday, October 6, 2021 8:27 am

The Barrington High School girls soccer team lost 6-1 to Cumberland at Victory Field on Friday night. The Eagles’ record fell to 1-3-3. Barrington entered Friday night’s game having won or tied its previous three games. The Eagles will travel to Portsmouth on Thursday for a division game against the Patriots.

The Barrington High School girls volleyball team fell to 2-7 after a 3-0 loss to Rogers High School on Monday night, Oct. 4. The Eagles started off slow, dropping the first set 25-5, but bounced back for a better showing in the second and third sets. Barrington is looking for its first win in the division.

The Barrington High School boys soccer team suffered its first two conference losses last week. The Eagles’ first loss came to top seeded LaSalle Academy (7-0-0) by a score of 7-1 on Wednesday evening. Barrington then dropped a 2-1 decision to East Providence on Saturday. Wednesday’s lone goal for the Eagles was scored by junior Leo Caldarella, while Saturday’s goal was scored by senior Ryan Perugini. The losses drop the Eagles into second place in the Division 1 standings with a record of 6-2-0 in conference play. The Eagles play against Moses Brown (3-3-3) at home on Wednesday afternoon at 4:15 p.m., and travel to North Kingstown to play the 4-2-1 Skippers on Friday night at 7 p.m.

The Barrington High School football team was unable to complete a valiant comeback against Mt. Pleasant at Conley Stadium in Providence on Sunday afternoon, Oct. 3, losing 32-26.

The Eagles entered the game without a number of its starters, as players were forced to quarantine — some had tested positive for Covid-19 earlier in the week while others were identified as close contacts. But despite the set-back, Barrington took an early 12-0 lead, as sophomore quarterback Alex McClelland ran for two first quarter touchdowns.

Mt. Pleasant weathered the early storm and battled back to take a 20-12 lead. The Kilties, playing in front of a raucous home crowd, increased their advantage to 26-12, but Barrington trimmed that lead to 26-19 at the start of the fourth quarter when McClelland passed to senior Adam Gravelle for a key touchdown on a fourth and goal. Will Hopkins booted the extra point up and through.

Mt. Pleasant answered the bell again on its ensuing drive, marching the ball down the field for another touchdown. Barrington’s defense stiffened on the two-point conversion try and stopped the attempt, leaving themselves trailing by two scores, 32-19.

The Eagles’ offense was unable to score on its next drive, despite some impressive plays. McClelland found AJ DiOrio for one crucial first down completion; Jack Robinson made a dazzling reception in the middle of the field for another key pickup; and Evan Anderson hauled in a big catch down the near sideline.

Barrington’s drive stalled and the Eagles turned the ball over on downs, but the defense stepped up and recovered a Mt. Pleasant fumble shortly thereafter. The offense then went to work and Andrew Madden made one of the biggest catches of the game, cradling a McClelland pass in the end zone with about two minutes remaining in the game. Hopkins made the extra point and Barrington had cut the lead to a single score, 32-26.

Barrington’s defense then came through with another big stop. The Eagles forced the Kilties into a fourth and long, and a fake-punt-turned-pass was intercepted by the Eagles’ return man, Bryan Ivatts. The senior raced into Mt. Pleasant territory before being tackled.

The Eagles took the field with time running down and made attempts at the end zone — Barrington’s best chance to tie the game came on a broken play, when McClelland sprinted to his left and drilled a pass toward DiOrio who had broken free in the back of the end zone. But just as the ball arrived, so too did a Mt. Pleasant defender who knocked it away.

Barrington is scheduled to host Rogers this Friday night at Victory Field at 6 p.m.