Christopher E. Larkosh, a full professor at the University of Massachusetts Dartmouth and an internationally renowned lecturer, died unexpectedly at his home in East Providence on Christmas Eve 2020. … 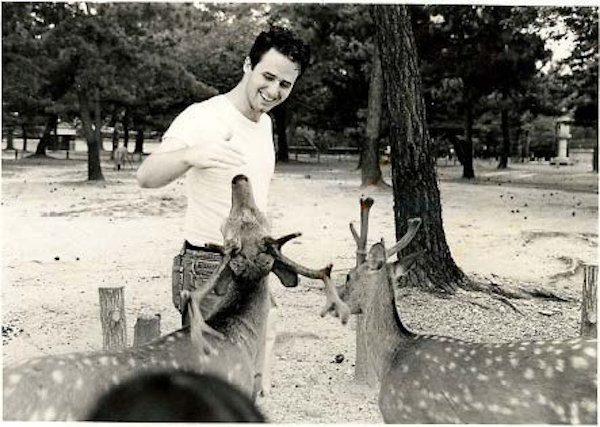 Christopher E. Larkosh, a full professor at the University of Massachusetts Dartmouth and an internationally renowned lecturer, died unexpectedly at his home in East Providence on Christmas Eve 2020. He was 56 years of age.

Professor Larkosh was born in Oak Bluffs, Massachusetts on September 2, 1964 to Dorothy Larkosh Roberts, a special needs teacher at the Tisbury School, and Edward Walter Larkosh, an Island science teacher and jazz musician. From a very early age, Chris was a brilliant public speaker and writer. He went from humble beginnings to become an expert in his academic field.

While growing up on Martha’s Vineyard, Chris was active in the Children’s Theatre and the Grace Church Children’s Choir. He had a lovely singing voice and performed lead roles in many musical productions. Chris displayed a level of intellectual sophistication and understanding well beyond his years.
He was always an outstanding student. In the 1969-70 academic year, the Larkosh family lived in Bogota, Columbia. Chris ate street food, listened to street musicians, and attended the bullfights with his father. He completed kindergarten studies at Colegio Nueva Granada, and appeared with his brother Dan in the high school production of The Pajama Game.

When Chris was seven, his mother took him and his brother to London, England where they embarked on a three-week guided bus tour of Europe. Chris and Dan collected souvenirs, coins, and artifacts from each country. The boys departed the jet plane at the end of the adventure, clomping through the airport in Dutch wooden shoes.

As an adolescent, Chris moved to Reno, Nevada after the divorce of his parents. Chris went on many long-distance car camping treks across North America and Mexico with his family. These events opened up new worlds, but Chris returned to Martha’s Vineyard each summer to live with his father and reconnect with friends, working summer jobs and enjoying beach days.

Professor Larkosh was a graduate of Procter R. Hug High School (Reno, Nev.) class of 1982, where he won numerous trophies for speech and debate. He played glockenspiel in the marching band, and continued to act and sing. Chris was elected student body president. In his senior year, Chris arranged for Hug to host the prestigious National Association of Student Councils conference, bringing hundreds of high school student leaders from all over the country to Hug’s campus for a three-day leadership workshop.

After graduation, Chris was awarded a Rotary Club scholarship and went to live with the Nels family in Leverkusen, Germany. He began speaking in German, but very quickly became fluent in more than a dozen foreign languages.

For the remainder of his life, Chris used his language skills to form friendships with folks of different backgrounds and cultures. In 1987, Professor Larkosh graduated from Vassar College summa cum laude with a degree in Hispanic Studies; and he then earned both his Masters and Doctorate in Comparative Literature at University of California at Berkeley. Chris was constantly on the go, traveling the globe on his own from a very young age. He had a magical ability to live and travel about, with the most limited financial resources. Chris was awarded a Fulbright grant, a Kosciuszko Foundation scholarship and a Rockefeller grant, among many other academic grants and awards which supported his international studies.

Deftly wielding the wand of language, Professor Larkosh sought to bring the people of the world together in understanding. For example, as a translator and news announcer for Polish Radio Warsaw, he covered elections in Polish-speaking areas of newly independent Lithuania, wrote features on Polish literary figures, and documented social and cultural changes in Warsaw during a period of radical political and social transformation from a totalitarian Soviet satellite state to an open and democratic society. Over many summers right up until he died, Chris volunteered tirelessly as a facilitator, working with refugees of many different backgrounds as they integrated in their new environment in Delitzsch, Germany.

As a full Professor at the University of Massachusetts, Chris taught graduate and undergraduate seminars in Lusophone literatures and cultures, Portuguese language, Portuguese-English translation, literary theory, and cultural analysis. However, he also lectured and published his writings around the world, in the many languages he had mastered, on topics including art, literature, language, and culture. Professor Larkosh was a friend to many within the Portuguese American community, and he loved to extol the thriving Lusophone and immigrant cultures of his home in south-eastern New England.

Each summer, Chris would treat his class to a day trip on Martha’s Vineyard, to attend the annual Feast of the Holy Ghost at the Portuguese American Club, located in the Oak Bluffs neighborhood where he lived as a boy. Chris also worked to bring public attention to North American writers of Lusophone descent, he believed in them and encouraged them.

Professor Larkosh was devoted to his work and travels, but he also enjoyed vacations and visits with his family. Traveling with Chris was deeply profound and rewarding. He thrived on the people, music, food, art, architecture, history, and culture, and he was eager to share the joy of discovery. A man of letters; friends and family could always count on a postcard from Chris, dispatched from some far-off, unknown location. Chris was an entertaining personality. He was a popular karaoke singer, performing under the stage name “Cèlinio”.

Chris had a universal sense of humor that was both sophisticated and silly. His tireless banter was full of crazy characters, pop-culture references, and song. His quick wit and down-to-earth rapport put everyone at ease and filled the room with laughter. Professor Larkosh preached a philosophy of tolerance and inclusion in his quest to bring the people of the world together in peace. Friends were the true flowers in Chris’s garden. He was a devoted friend to many people world wide, who join in mourning his loss. Chris also enjoyed gardening, art, music, picnics, cooking, hiking, movies, comedy, and collecting coins and stamps.

Chris died young, but he lived a long time. Chris was an exceptionally good son, brother, and uncle. He is survived by his brother Daniel J. Larkosh of West Tisbury, Massachusetts and his nephews Oliver and Xavier. His father, Edward, passed away shortly after Christopher’s death. Chris was predeceased by his mother, Dorothy A. Larkosh Roberts.

Chris is buried at the Oak Grove Cemetery, Oak Bluffs, Massachusetts, beside the path he would walk as a boy, past the Portuguese American Club, through the woods, to school and home again. Donations in Chris’s memory can be made to the Southern Poverty Law Center, the ACLU, Doctors Without Borders, and the World Wildlife Fund.