PROVIDENCE — The inadvertent release of components used to treat sewage in city cause state officials and activists to raise a minor alarm about potential contamination of Narragansett Bay. 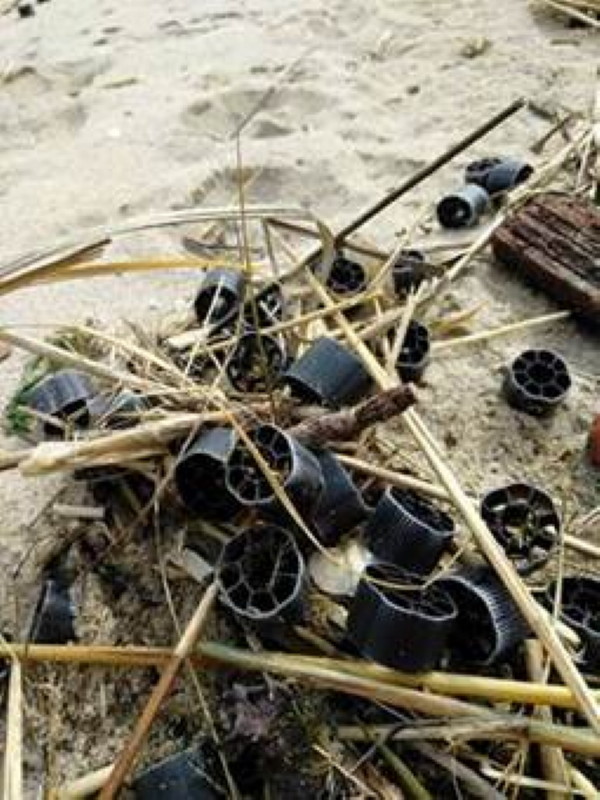 "Pinwheels" used in treating wastewater in East Providence were inadvertently discharged and recently washed ashore in the West Bay.
Posted Thursday, March 15, 2018 6:00 am
By Mike Rego

PROVIDENCE — The inadvertent release of components used to treat sewage in city cause state officials and activists to raise a minor alarm about potential contamination of Narragansett Bay.

The Rhode Island Department of Environmental Management recently issued an advisory to neighborhoods in Warwick and other communities along the Providence River and East and West Passages of the Upper Bay about reports of pieces of hard plastic shaped like pinwheels washing ashore.

“With more intense storms due to climate change, unfortunately, we will see more trash and debris carried by stormwater into our waterways,” said DEM Director Janet Coit. “We need to do more to prevent plastics from ending up in Narragansett Bay.”

The plastic debris was flushed out of East Providence’s wastewater treatment facility in Riverside during the intense rainstorm of March 2. The debris, called “media,” is not dangerous or contaminated with sewage sludge. It escaped the plant after going through the treatment system’s secondary clarification and disinfection stages. It did not escape directly into the Providence River.

“The pinwheels are used as part of the treatment process,” said City Department of Public Works Director Steve Coutu. “They’re put in the tanks and used to grow bacteria, which helps break down the wastewater for treatment. There’s literally millions of them in the tanks. It was an accident. There is nothing hazardous about them.”

DEM began an investigation into the matter and plans follow up with the city and its wastewater treatment contractor, Suez, to identify interim measures that may prevent further release while they work to reduce the root cause of excessive flows. Residents are reminded that the discharge of stormwater and sump pumps into the city’s sanitary sewer are prohibited.

“Suez responded and was there last week to help with the clean up,” Mr. Coutu added. “They’ve been sporadically appearing, nothing really significant.”

The director continued, the reason for the accidental discharge was to be determined. Mr. Coutu said the tanks were designed to in fact contain the pinwheels upon flushing of the system. He added Suez personnel were reviewing the matter and it was likely the design would need to be “tweaked.”

In a related matter, Save The Bay recently reported substantial amounts of the debris on the north-facing beach of Rocky Point. Other reports indicate debris having been beached at Gaspee Point and Conimicut. East Providence officials have already visited the Gaspee site and have crews arriving tomorrow for cleanup. Save the Bay has been notifying their members to help target cleanup.

DEM encourages anyone seeing the debris to call DEM’s 24/7 Dispatch at 401-222-3070 so that DEM can track locations and bring that to the attention of the crews working to remove the debris from our environment.