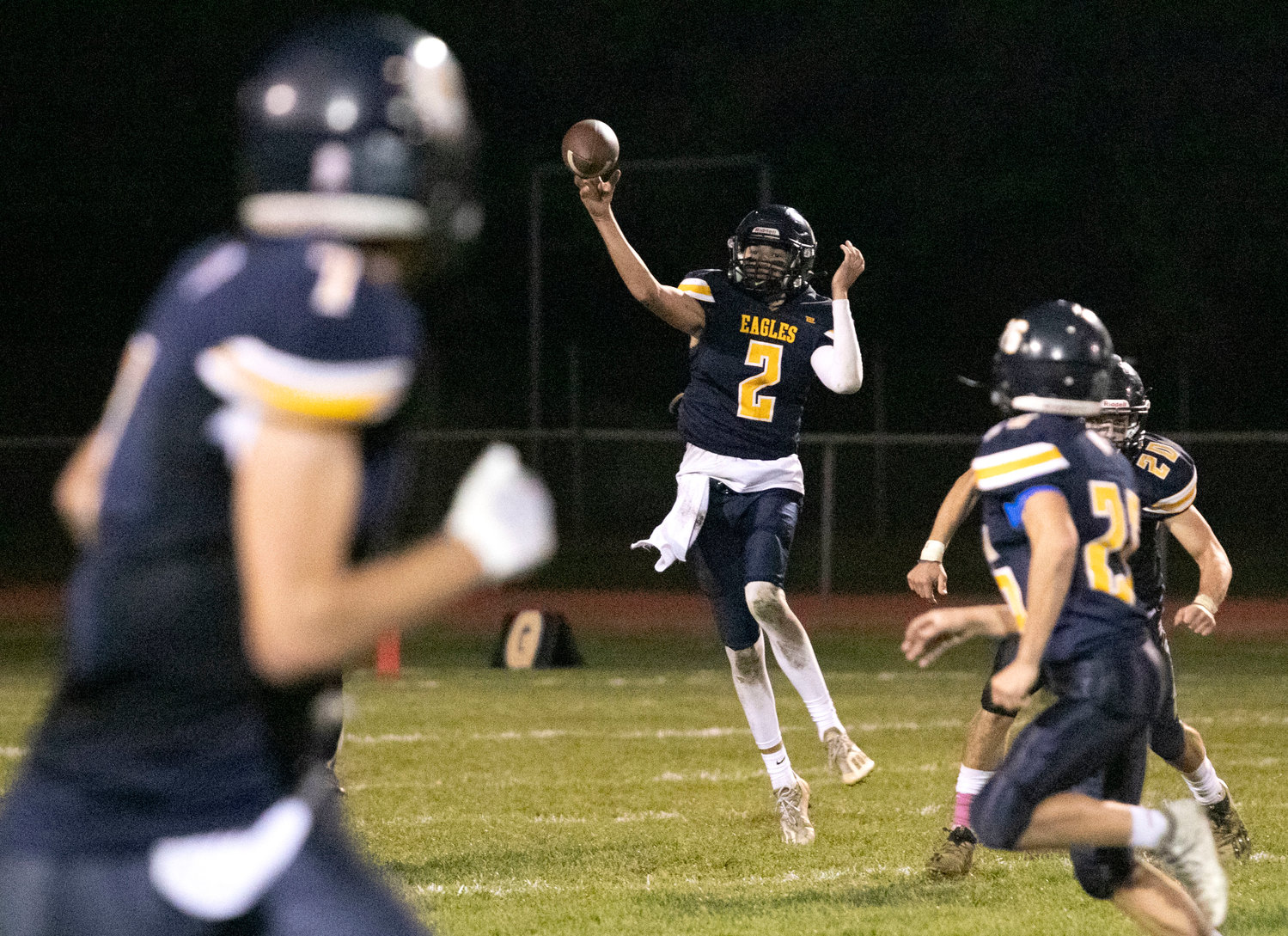 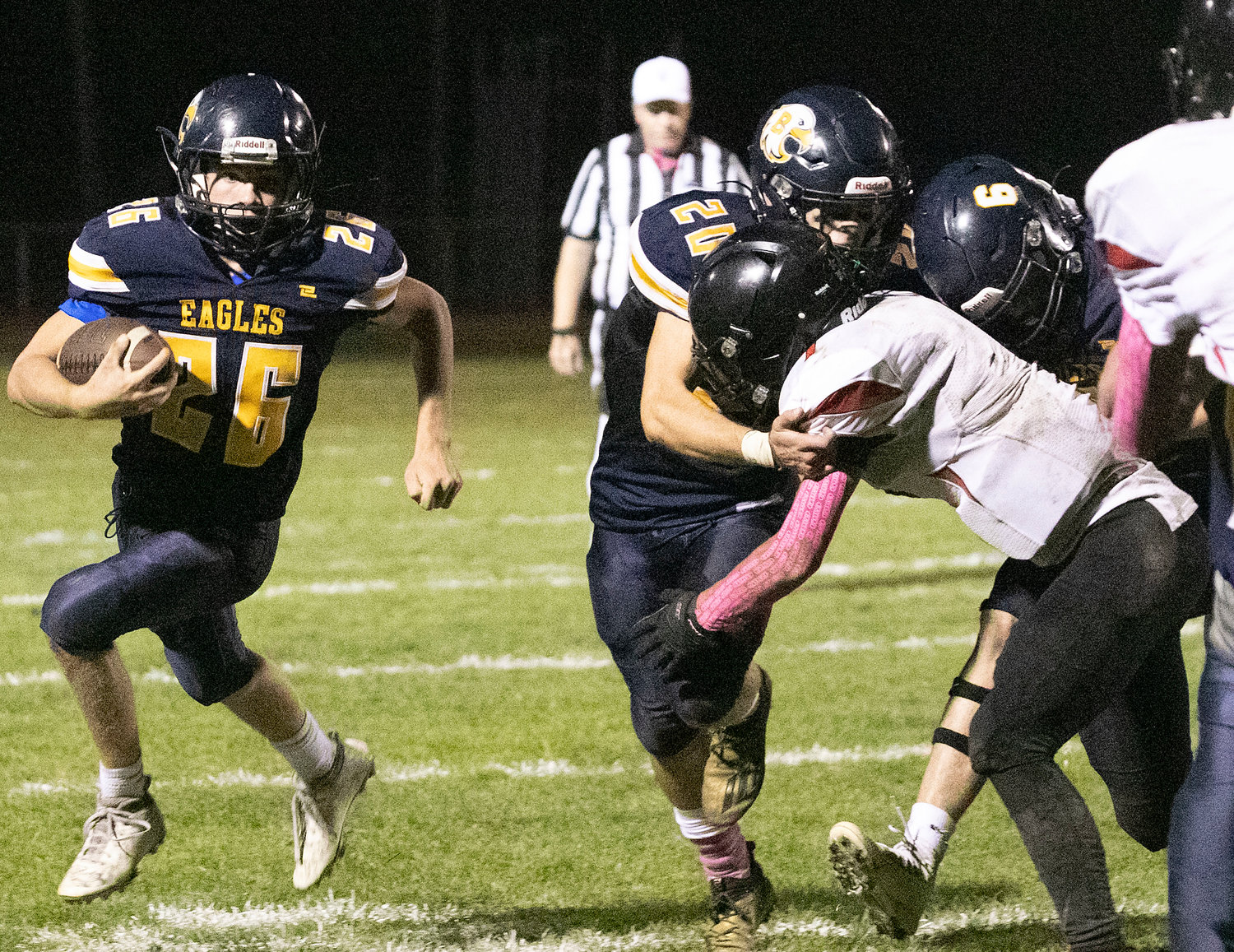 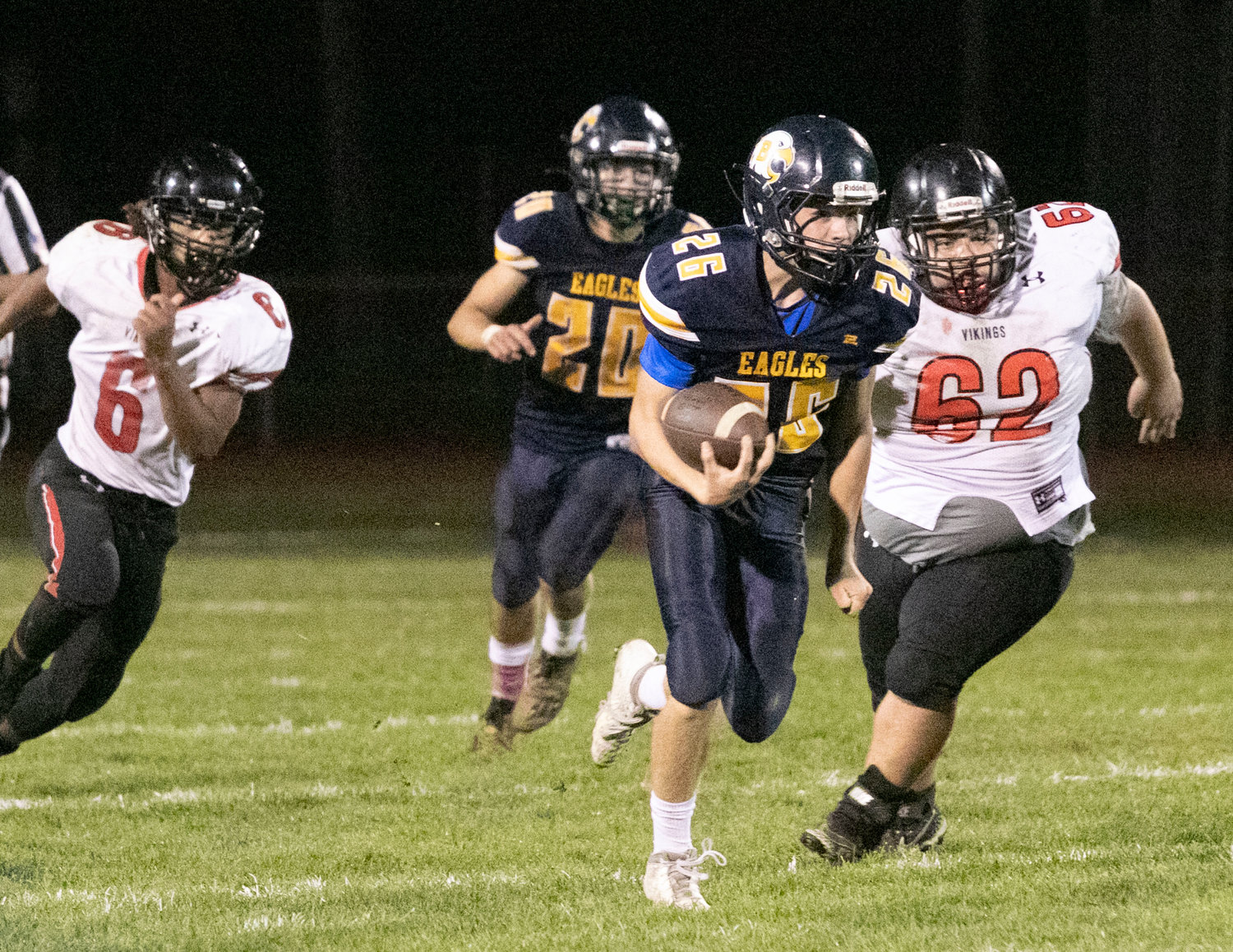 Barrington's AJ DiOrio breaks into the open field during the Eagles' game against Rogers on Friday night.
Photo by Richard W. Dionne Jr. 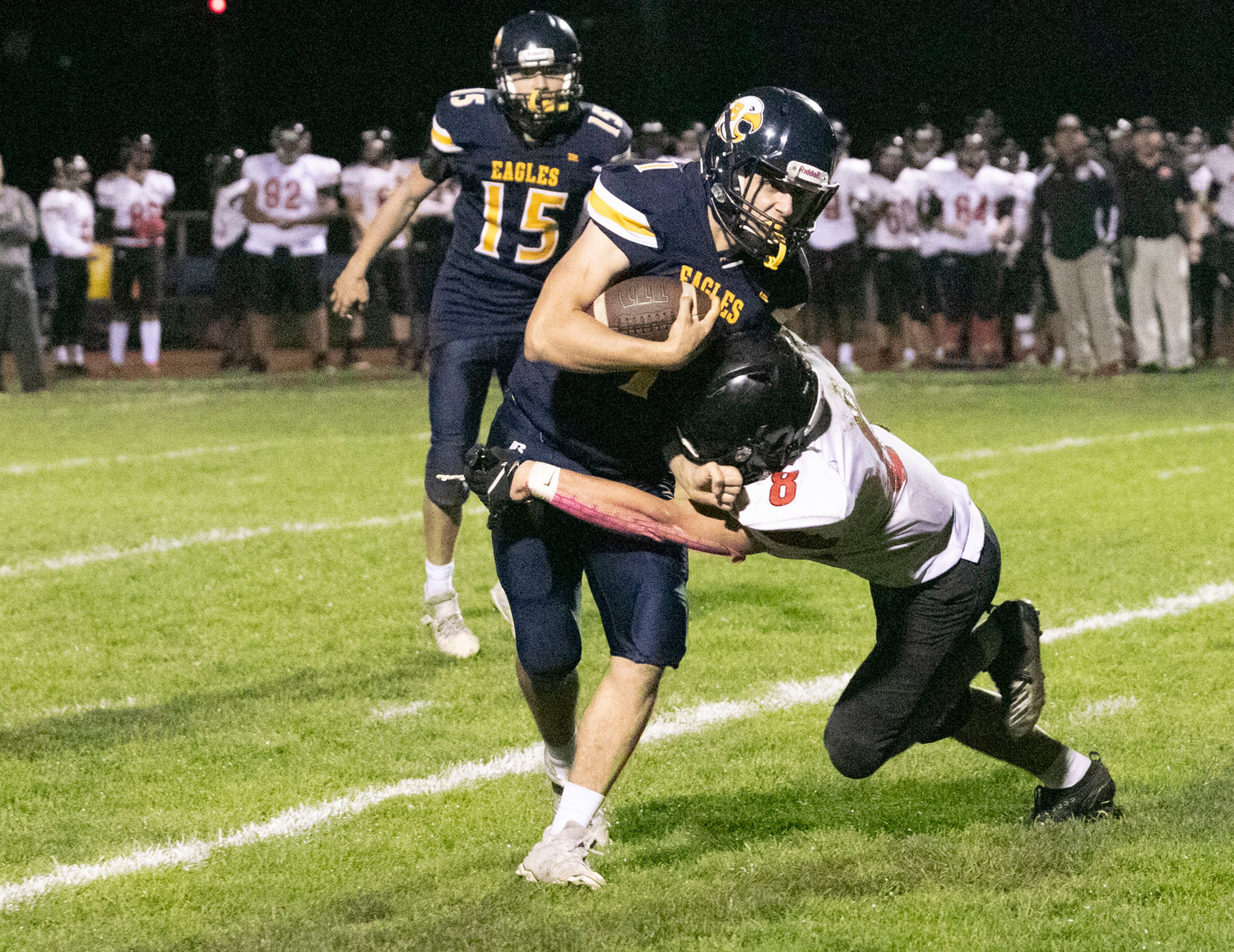 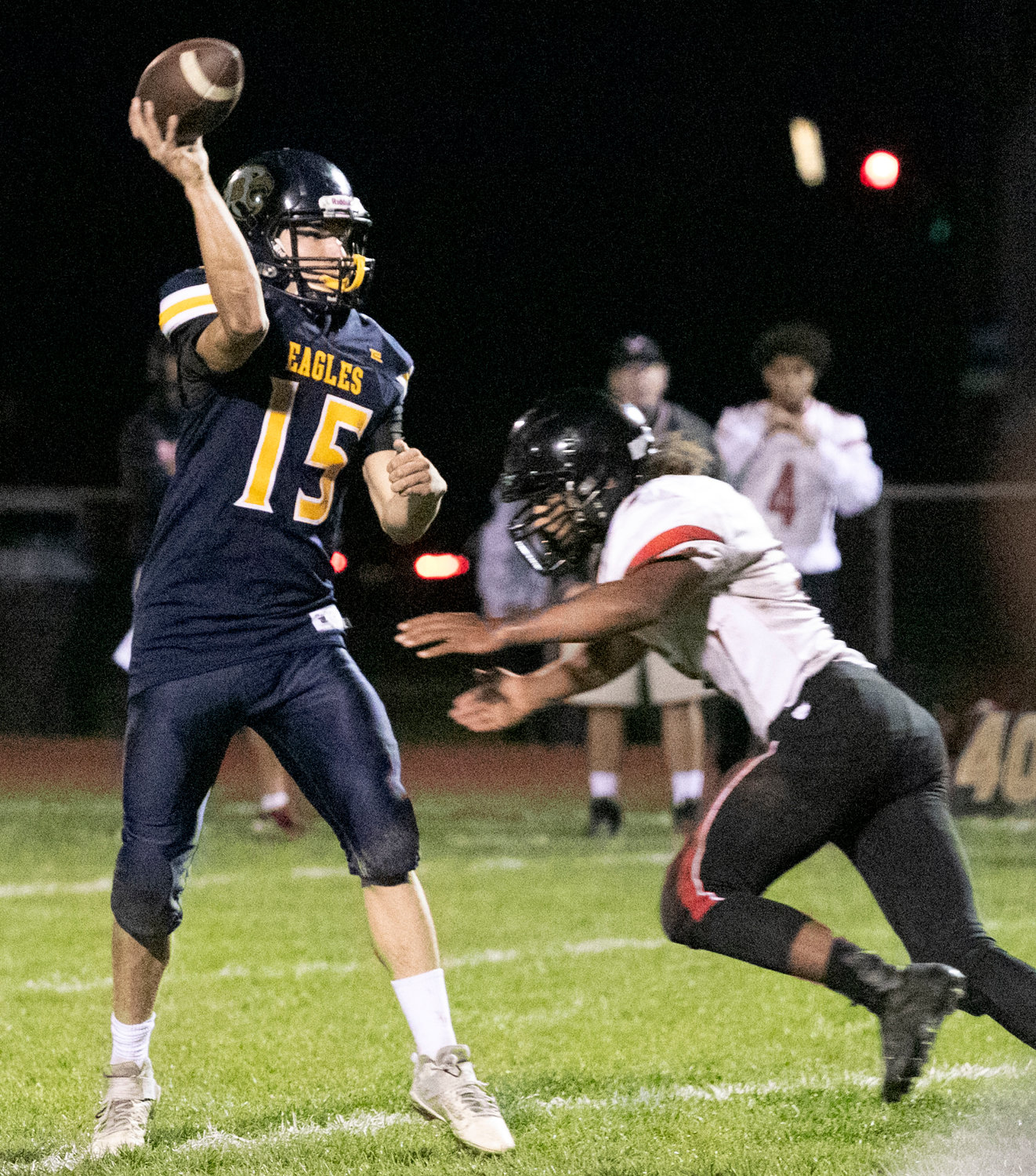 Barrington's Alex McClelland releases a pass before getting hit by a Rogers defender.
Photo by Richard W. Dionne Jr. 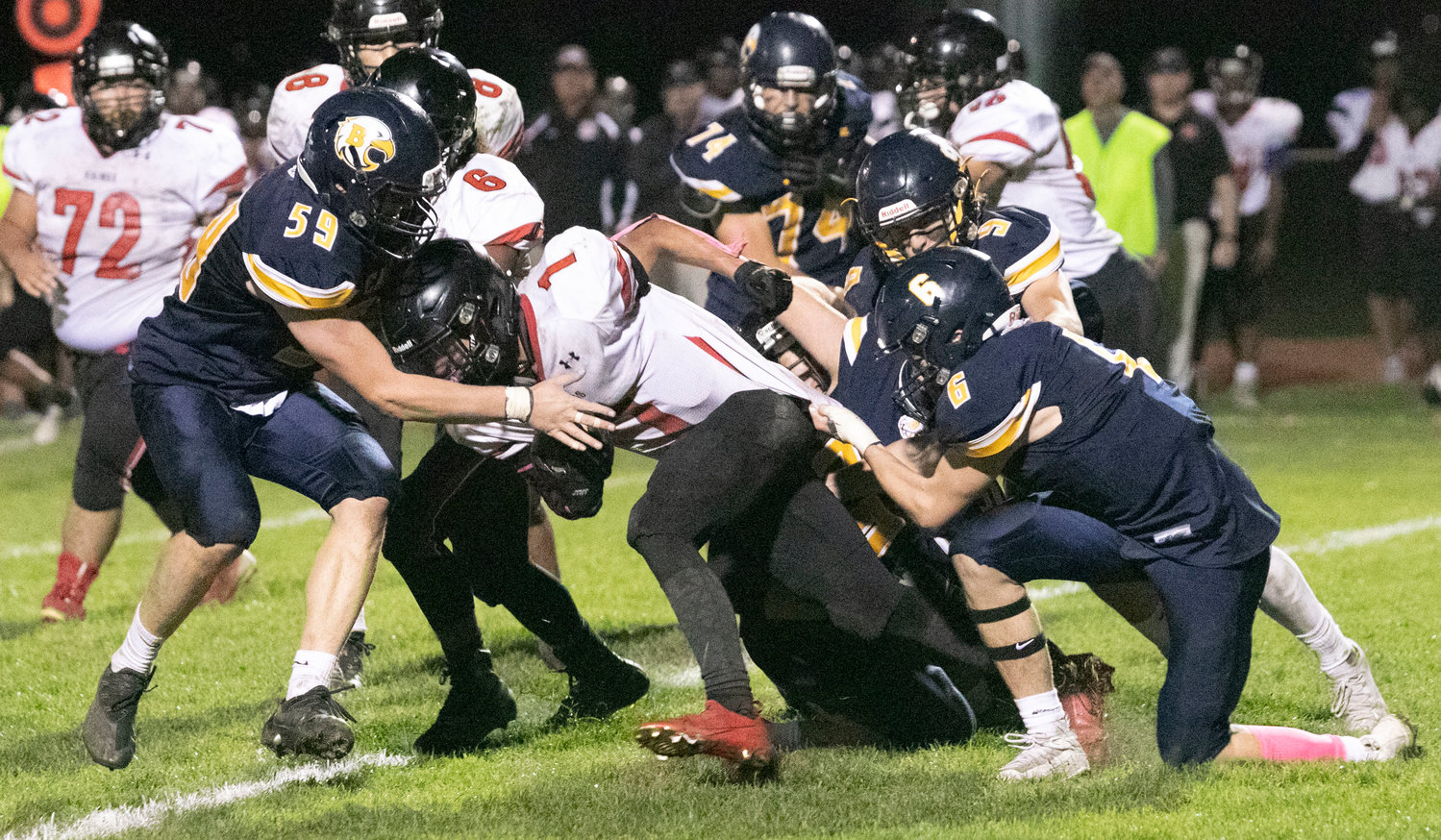 Barrington's Braeden Flaherty (6) and Will DiGiacomo (59) bring down a Rogers running back on Friday night.
Photo by Richard W. Dionne Jr.
Previous Next
Posted Saturday, October 9, 2021 9:51 am

Barrington’s defense played well throughout the game, and stopped the Vikings on three straight plays to open the first quarter. James DiGiacomo blasted through the Rogers’ line and sacked the quarterback on a key third down play, forcing the Vikings to punt.

The Eagles’ offense took over in good field position and powered down the field behind long runs from senior Bryan Ivatts and DiOrio. Sophomore quarterback Alex McClelland handed off to DiOrio who capped the drive with a seven-yard touchdown run, and Will Hopkins kicked the extra point giving the Eagles a 7-0 lead.

Rogers responded with a long scoring drive on its next possession, but Barrington expanded its lead early in the second quarter when quarterback James Anderson pitched to DiOrio who sprinted past the Vikings’ secondary for a long touchdown run.

Barrington took over possession and marched down the field. Anderson kept the drive alive with a key run on fourth and eight, picking up nine yards and a first down. A few plays later, DiOrio ran for his third touchdown of the night, plowing into the end zone from a yard out.

The Eagles led 20-6 at halftime, and neither team scored in the third quarter. Both squads turned the ball over with fumbles. Barrington’s Jake Zimmerman blocked a punt late in the quarter, giving the Eagles’ offense good field position.

At the start of the fourth quarter, Barrington's Braeden Flaherty carried the ball for a long pickup and then capped the drive with a short touchdown run.

The Eagles’ final touchdown came on a “pick-six” when Ben Ptaszek hauled in a Rogers’ pass and ran untouched 32 yards for the score.