EAST PROVIDENCE — After a break of nearly a decade, a second attempt to develop a former gravel pit off Wampanoag Trail near the East Providence-Barrington line is once again gaining … 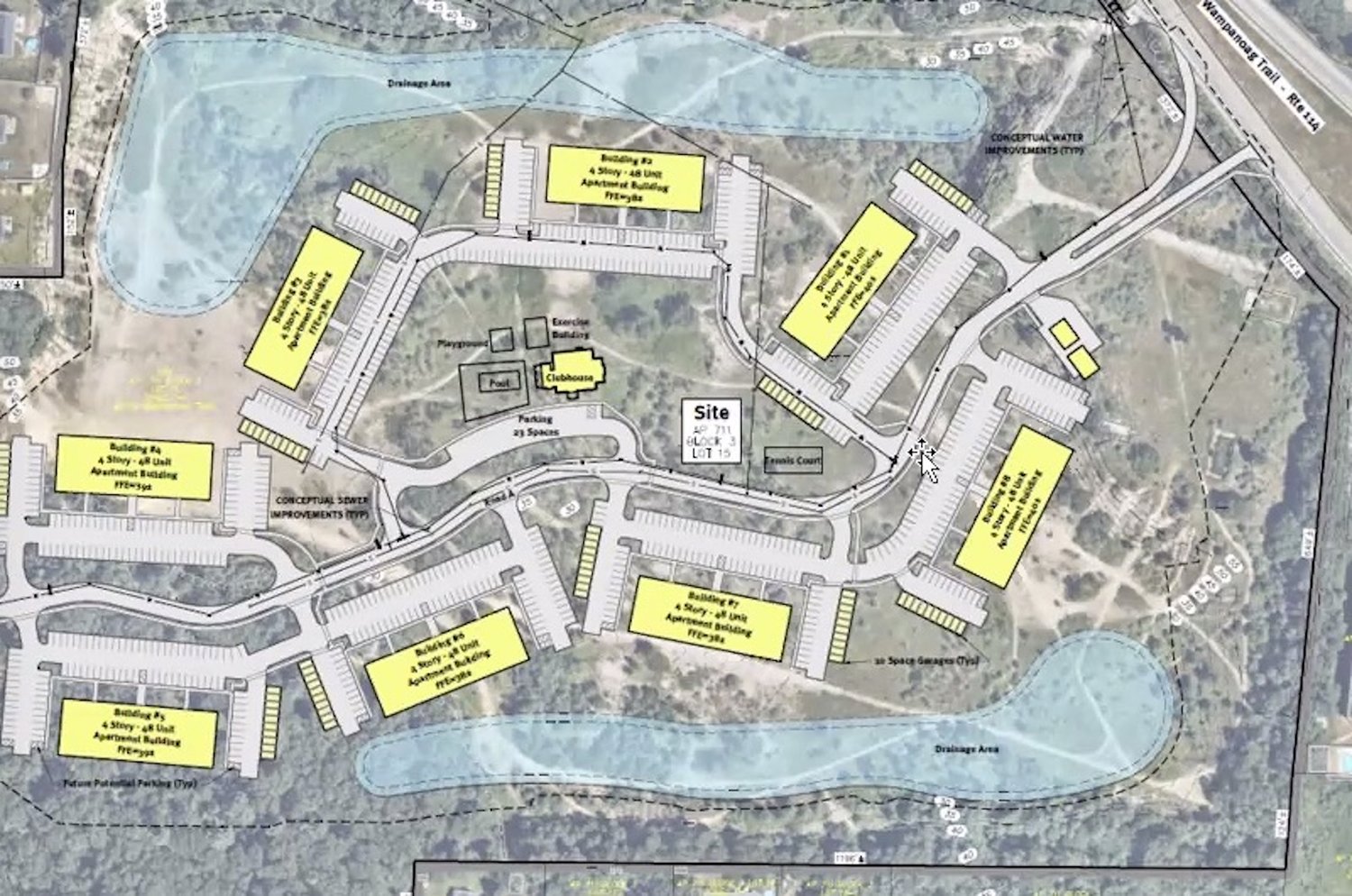 An architectural schematic of the proposed Wampanoag Meadows site. 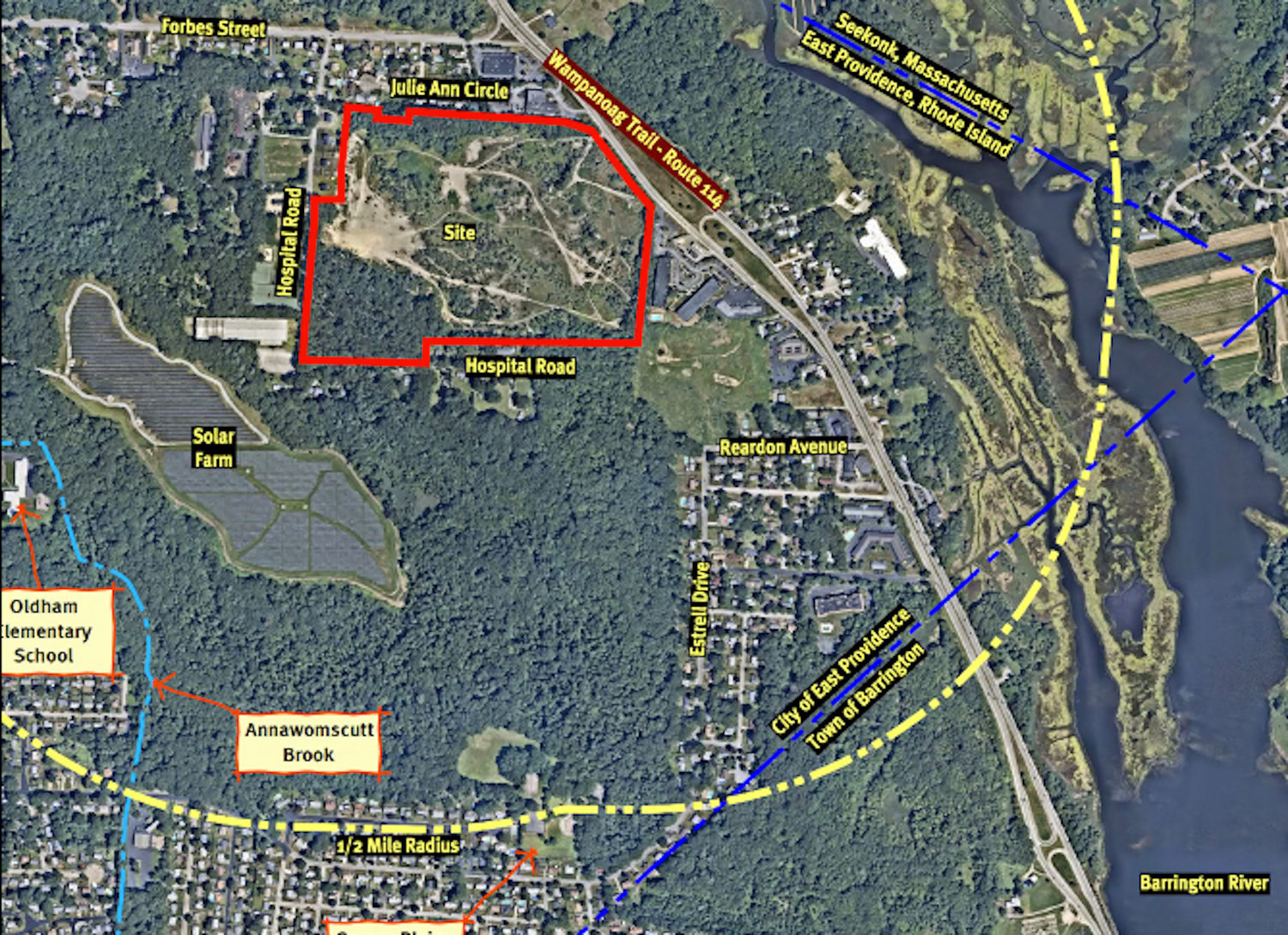 An architectural overlay of the proposed Wampanoag Meadows site. 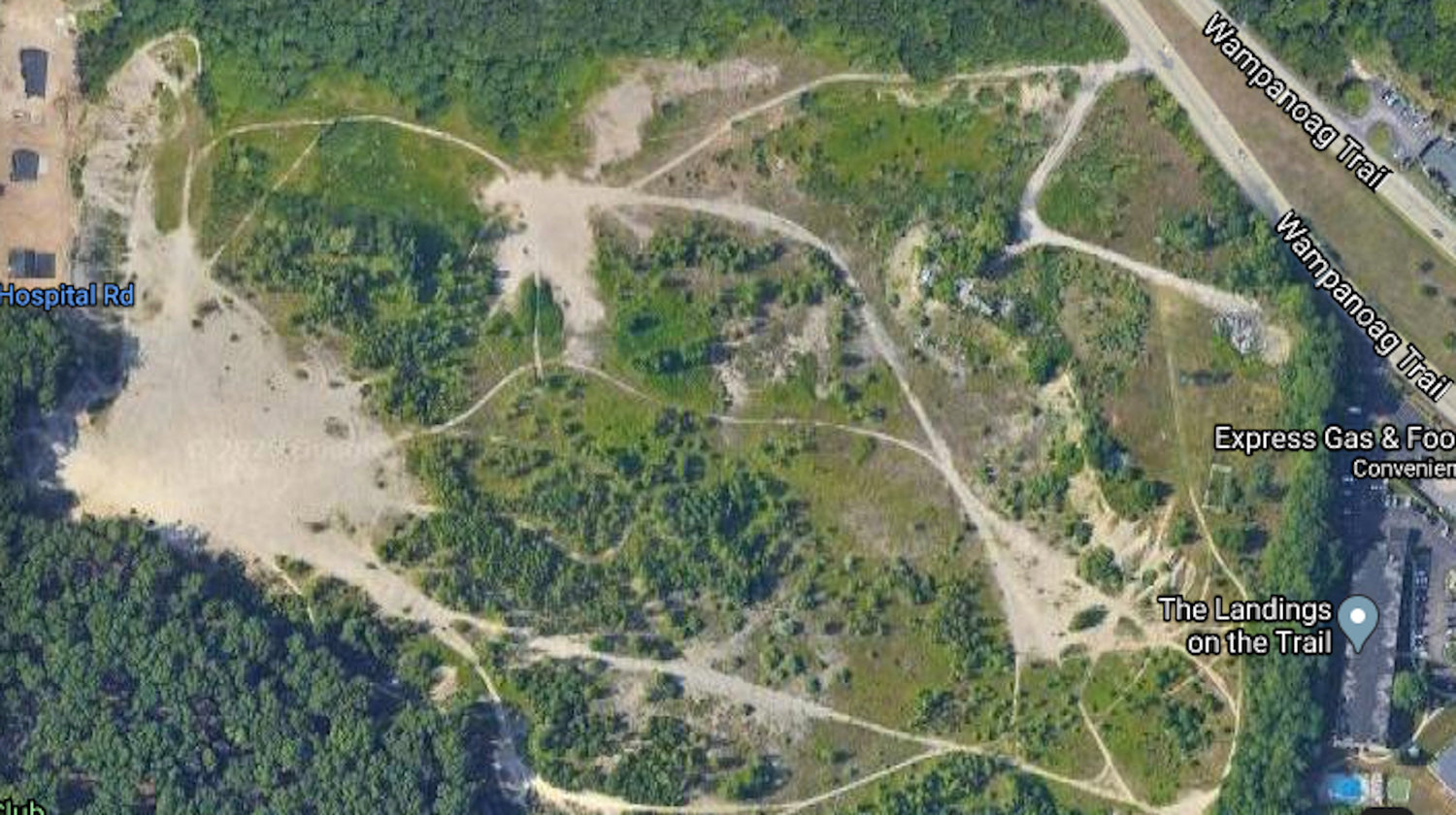 A Google Maps view of the proposed Wampanoag Meadows site.
Previous Next
Posted Wednesday, July 22, 2020 10:06 am
By Mike Rego

EAST PROVIDENCE — After a break of nearly a decade, a second attempt to develop a former gravel pit off Wampanoag Trail near the East Providence-Barrington line is once again gaining momentum.

The city's Planning Board at the conclusion of a lengthy meeting Tuesday night, July 21, unanimously backed initial allowances for the development to move forward. The board spent the first couple hours or so of its meeting hearing about the renewed effort to construct a multi-unit housing complex in the south end of the city, Wampanoag Meadows.

(Update/corrected, July 22, 3:30 p.m.) The Planning Board eventually accepted the masterplan as submitted. The next phase of the process is for the applicant to submit a preliminary plan back to board for further consideration.

The 55-acre parcel was once a sand and gravel pit, but has sat vacant for the better part of the last three decades since its viability to supply the industry ceased.

Flatley, which has taken on the project in the stead of owner Driscoll Development LLC of East Greenwich, was represented last week by company engineer Kevin Walker. Mr. Walker told the board Flatley’s plan is to construct eight units of 52 two-bedroom and one-bedroom/studio apartments for a total of 416 residences. Each building would feature 26 two-bedroom, 22 one-bedroom and four studio flats.

The project includes construction of a centralized 4,500-5,000 square foot clubhouse for use by residents, potentially featuring a small movie room, billiards table, board games, lounge and kitchenette among other items.

The nine structures on the site, Mr. Walker explained, would have a buffer of between 200 and 280 feet from existing abutters to the property. He said only 19.5 acres at the site would actually be constructed with over 30 acres of open space remaining, in which a publicly accessed walking trail in under consideration.

“The way we’re approaching this is we’re trying to be respectful of the property itself and the abutting properties,” Mr. Walker added.

Further details
He continued, the apartments would be rented at “market rates,” estimating the per-month cost at $1,350 for studios to $1,890 for the two-bedroom spaces. Mr. Walker said the complex would be staffed full time with a property manager on site in the clubhouse at least six days a week and likely seven at the start as the residences are leased.

The development includes 679 proposed parking spaces as well as several garage stalls for rent likely between $100-$200 per month.

Other elements being considered for use by residents are a pool, tennis courts, putting greens, bocci court and volleyball court.

“There’s a lot of amenities, a lot of green space and a lot of respect for the neighborhood,” Mr. Walker added.

Brandon Carr, a senior project manager for DiPrete Engineering advising Flatley on the proposal, explained the previous owner of the property, Driscoll, originally sought and gained most state and local approvals for the development of 308 apartments back in 2013-14, but opted against pursuing the project to its completion.

Mr. Carr said though the two designs are similar, the key changes are the increase in the number of apartments and changing the size of each building from three stories at about 40 feet in height to four stories and 50-plus feet in height. That change must go before the City Zoning Board for a variance.

(Update/corrected, July 22, 3:30 p.m.) Planning Department Director Bill Fazioli explained after the meeting since the property is at low elevation due to the previous gravel operations the increased heights will be mitigated by the low ground point.

Traffic concerns
The most discussed aspect of the proposal pertained to the potential uptick in the flow of motorists to and from the development onto Wampanoag Trail.

Amy Archer, who conducted a traffic study on behalf of Pare Engineering, noted the counts included were taken before the outbreak of the COVID-19 pandemic and crash data was provided by the East Providence and Barrington police departments.

Ms. Archer said the study reviewed traffic on a 1.5 mile stretch of the Trail. The findings included a normal volume of incidents, most single occupancy accidents. It recommended sight lines at the Meadows property be altered. Some trees needed to be removed through construction of the entry/exit of compound onto the Trail. The study found a good level of service (LOS). Access and egress to the Trail came with an approximately 35 second wait and a roughly 20 second wait at the northbound turn-around near the Barrington line.

Board member Eric Crook questioned the voracity of those figures, wondering if traffic wouldn’t be impacted more significantly. He wondered if the streaming of dozens more vehicles onto the Trail, especially at peak morning and afternoon hours, wouldn’t lead to more congestion.

Both Director Fazioli and Senior Planner Patrick Hanner told the board the full traffic report, as well as one for drainage at the site, would be peer reviewed by the city before the next phase of the proposal is considered by the board. It was not required at the masterplan concept stage, but at the preliminary stage that follows. Mr. Hanner emphasized the board has the ability to revisit the concept if the transportation study causes greater concerns.

Member comments
Planning member Chris Grant asked if his recollection of drainage and traffic studies being peer reviewed and close to receiving formal approved back in 2013 when Driscoll initially approached the city about the proposal. Mr. Hanner said that was correct, adding the applicant at the time failed to meet final required condition, which was an improvement guarantee to the city for infrastructure upgrades.

Asked why his client did not see the original version to its end, Stephen Antonucci, a lawyer for Anthony DeSisto Associates representing Driscoll, didn’t quite directly answer, saying instead “while the proposals are similar, we feel this is a different and much better project.”

Board Chairman Michael Robinson said he supported stage approval of the proposal, but considering where the project is located, the body “should spend the extra time taking another look” at the traffic matter. Echoing those sentiments, board member Dr. Alan D’Aiello said although the revised proposal of Flatley is “a better plan than the previous one,” including more open space, his “only real concern is traffic going to Wampanoag Trail.”