The application to transform the building was put forth by an existing Warren business owner — Matthew King, who owns and operates the Taco Box near the intersection of the bike path and Child Street. 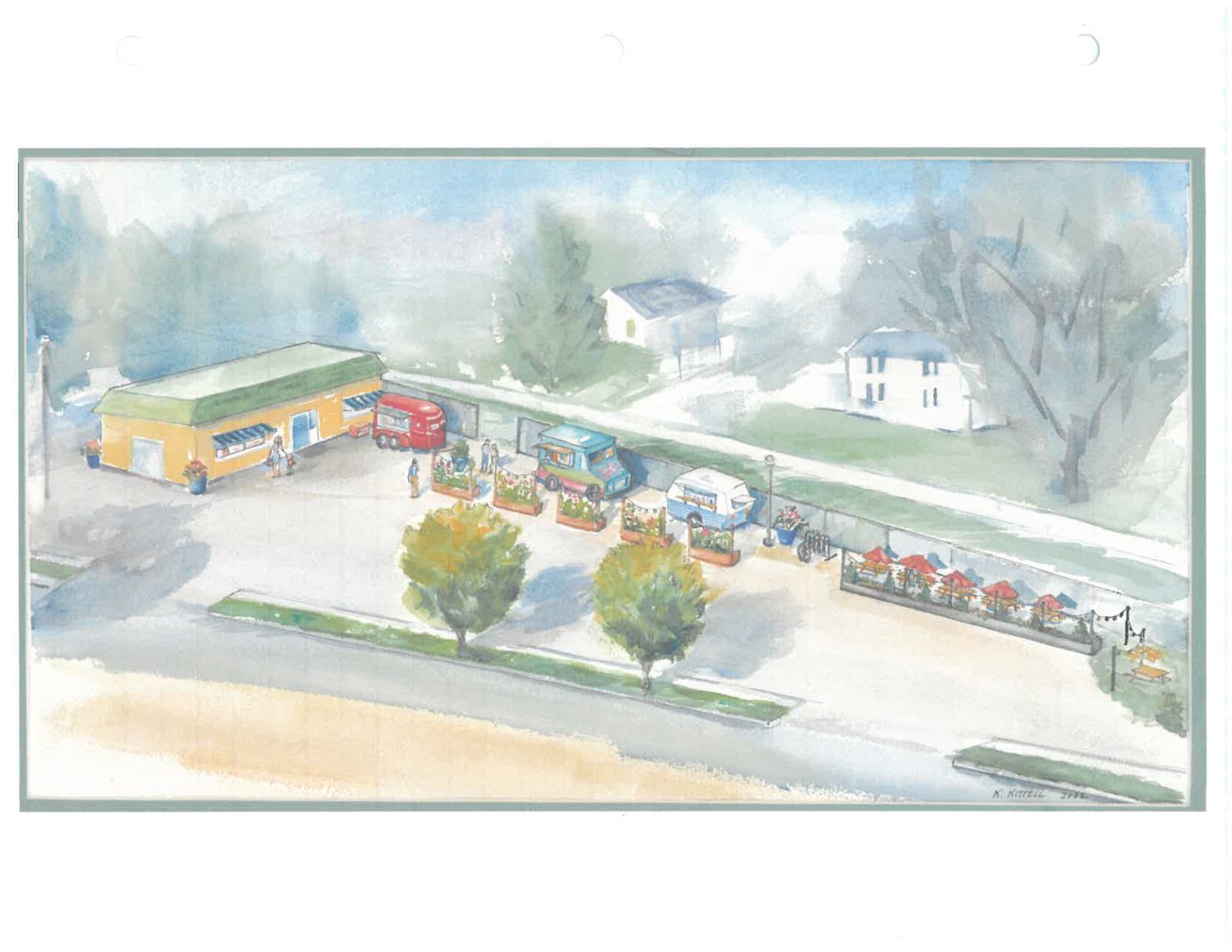 A rendering provided by applicant Matthew King to the Warren Town Council provides a glimpse of his vision for the former DB Mart on Main Street, which he hopes to transform into a spot for rotating food trucks and a static business serving other offerings from a to-go window. 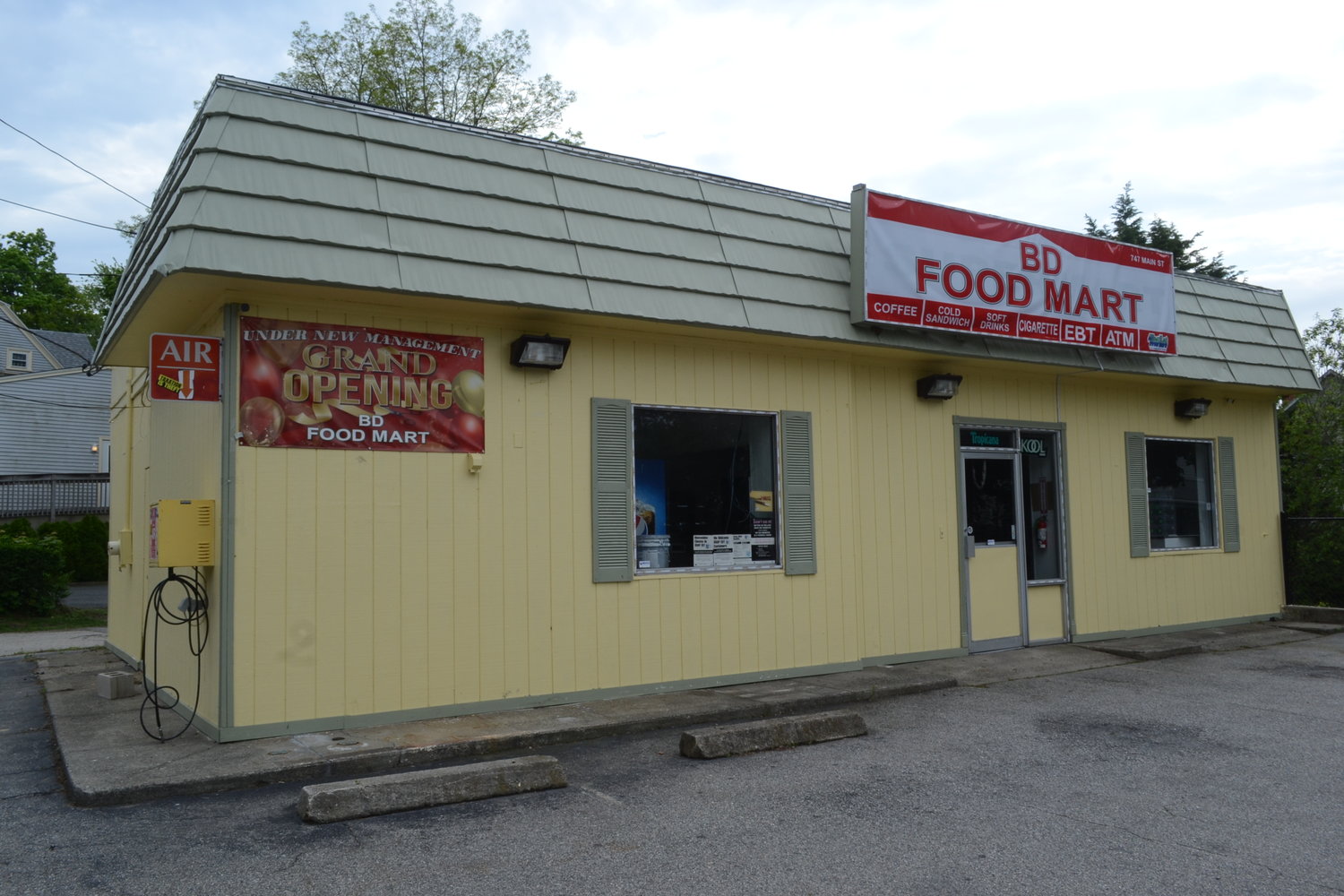 The vacant store at 747 Main St. as it currently stands, which still has an air compressor setup on the side, could become a new stop along the bike path and Route 114 for residents and those passing through. 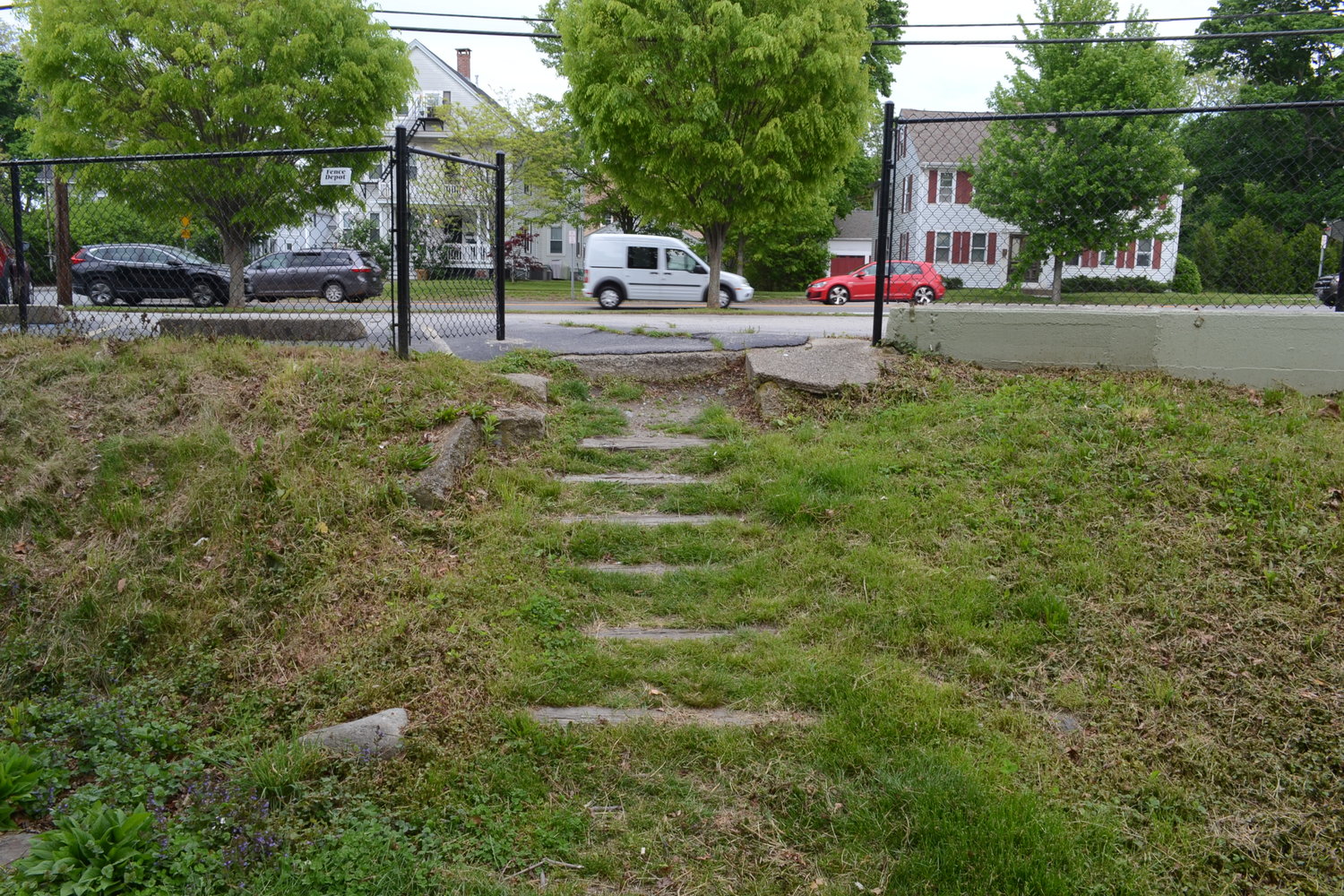 A crumpled, makeshift set of stairs fashioned from old railway ties was the subject of concern regarding safety for people accessing the property from the bike path, which abuts the building to the west.
Previous Next
Posted Tuesday, May 24, 2022 1:56 pm
By Ethan Hartley

The vacant building at 747 Main St. that used to house the BD Mart convenience store on the south side of Warren could potentially become something much more vibrant as soon as this summer, pending a couple of conditions that were set by the Town Council during their meeting on Thursday night.

The application to transform the building was put forth by an existing Warren business owner — Matthew King, who owns and operates the Taco Box near the intersection of the bike path and Child Street.

“Our goal is to create a destination in the south side of the town that would create an amenity for the community, for the use of Burr’s Hill Park and the beach, and people using the bike path,” King told the council.

King said that he envisions having three food trucks serve the location, one of which will remain fairly consistent and remain at the property while the other two can be rotated out to provide a higher amount of diversity in the offerings. The existing building itself would be renovated to house a static, to-go food business to support and supplement the food truck offerings, as well as offer a public bathroom. Though King didn’t have a specific tenant in mind yet, he proffered the concept of an ice cream shop as something that might be possible.

King mentioned that he envisioned the spot, which abuts the bike path near the intersection of Campbell and Main Streets, as a potentially useful resource to cyclists in the area. He mentioned possibly utilizing the existing air compressor hookup that remains attached the building to provide a sort of bike maintenance station.

“So if you come off the bike path and need to tighten a bolt,” he said. “We may [also] add some more bike racks in that area if necessary.”

The rendering put forth by King includes a variety of flower boxes and outdoor seating to provide space for customers. Concerns were raised about the safety of customers, considering the speed at which people had been seen entering and exiting the lot under its prior uses. Ultimately, the council and King agreed to allow the project to move forward under the condition that the town’s traffic advisory board be able to review the proposal and make an official recommendation during the council’s June meeting.

The other major concern was levied by councilman Joe DePasquale, who brought up the decrepit stairway that leads from the west end of the property onto the bike path.

“They’re a safety hazard,” he said. “And they are in that in-between land of a ditch, the bike path, and his property. Someone has to take ownership of those and deal with those accordingly because I’ve seen a few people actually fall off them. I don’t think they can stay the way they are.”

The land in between the bike path and the property connected by the stairs is actually state-owned land, according to Town Manager Kate Michaud. King said he was amenable to looking into possible solutions for the stairs, but if it turns out to become an overly burdensome expense he would simply block access to the stairs to prevent people from traversing them.

“My intention was to improve that last step and fix the steps and put a railing in,” King said. “However, if that’s going to be an issue with the state, if they want to see some sort of engineering study and a $20,000 set of steps, I’d prefer to just put a gate there and be done with it.”

DePasquale also mentioned his concern that people would start parking in the abutting neighborhoods to access the new amenity.

“Because this is happening when nothing is there, I can only imagine that when there’s a reason to go there, they’re going to be there,” he said.

As proposed, King said there would be five parking spaces (including an ADA space) inside the parcel and another six or seven spots along the stretch of Main Street near the building — which he recommended making 15-minute spots to discourage extended parking.

DePasquale cautioned King that people who have gotten used to the building being vacant might be hesitant or resistant to a new use appearing, and the resulting traffic and increased activity in the area that would result.

“Not saying they’re against you, but when you sit in the seat we’re in and these things happen, sometimes people get comfortable with vacancy, and that can be a difficult hurdle to overcome,” he said.
King said that, as he has strived to do at the Taco Box, his top priority was being a good neighbor.

“I am amenable as the project evolves and as the business operates if there’s a neighbor that has a concern that they can reach out to me,” he said. “We have a very good track record with neighbors over at the Taco Box.”