In an effort to help become more energy independent as well as save on utility bills, more and more homeowners are considering going solar. While there is a significant learning … 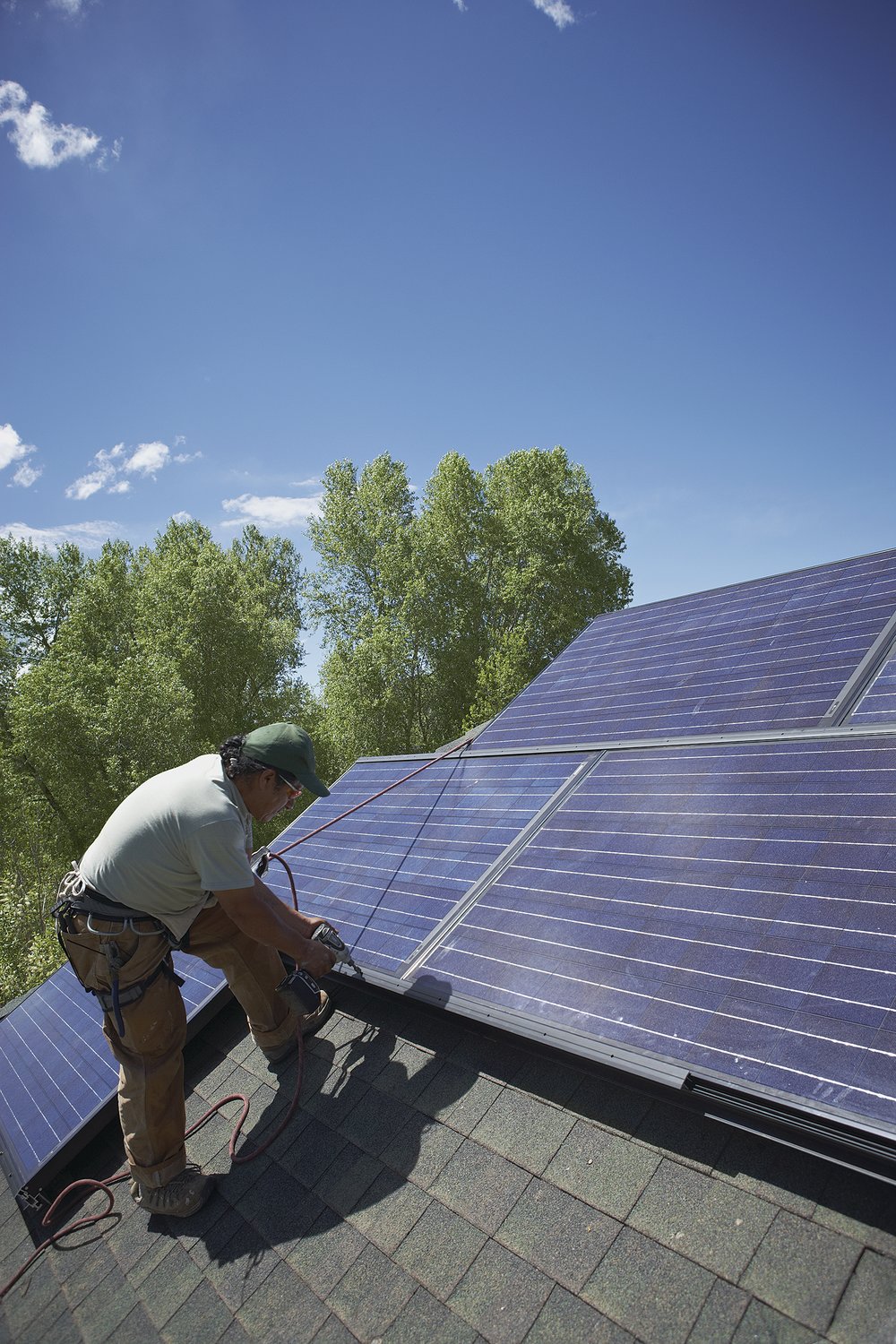 One expert recommends making sure that the same company that sells the system also does the installation.
Tetra Images - Shawn O'Connor
Posted Thursday, September 8, 2022 7:00 am

Solar power is absolutely fantastic. There is no question we should be doing it, but be careful in the process. Do your homework, make sure you’re working with the right people, that it’s financially practical and then make the best decision for your family.”
Frank DiMauro
To learn more about solar

In an effort to help become more energy independent as well as save on utility bills, more and more homeowners are considering going solar. While there is a significant learning curve before making the decision to use solar power over standard electricity, converting sunlight directly into electricity is appealing, especially with electric rates set to be raised soon.

Although initial installation costs are steep, with federal and state tax incentives and rebates, solar startup costs can be reduced substantially. Here’s a primer on what you’ll want to know about solar …

What is solar energy and how does it work?

Solar energy works by converting sunlight into electrical energy through the use of solar photovoltaic (PV) panels installed typically on roofs, though they can also be placed elsewhere on a property.

During the day, the panels absorb energy from the sun, collect the energy and turn it into direct current (DC) energy. The DC energy is passed through an inverter box to convert it to usable (AC) electricity, which comes into the home through wall outlets.

This electricity can be stored in a solar battery or, in most cases, sent through a grid to the electric company. Called net metering, the tie-in system connects to the electrical grid, generates power for the home, then feeds excess generated power back into the grid (when the meter ‘spins backwards’) and the homeowner is then given credit toward their next bill.

Installation costs for solar systems run around $25,000, but can be offset with rebates and incentives like the Inflation Reduction Act’s Residential Clean Energy Credit, where homeowners can subtract 30 percent of the cost of installing solar from federal taxes.

There are also Renewable Energy Fund grants and a Rhode Island sales tax exemption. After working in the credits as well as other incentives, the total price can fall by thousands.

Most solar power users will see payback on their electricity bill in about 6 to 8 years on a solar panel system that typically lasts 25 years.

Another option is the Rhode Island Renewable Energy Growth Program administered by Rhode Island Energy, which allows customers to sell their solar output back under long-term rates at fixed prices. These lock-in rate plans are available for 15 to 20 years.

Tiverton architectural designer Frank DiMauro has worked with solar for nearly 25 years, including designing and developing an affordable, ultra-efficient ‘net zero ready’ home in Tiverton using photovoltaic and thermal solar. His advice for those considering solar is to get quotes from four or five solar installation companies and reading the fine print before signing any contracts. He also suggests checking with friends and neighbors who have had solar power systems installed for recommendations.

“There is a lot to be said for talking to someone who has had it done to learn from their experience,” he says.

Things to consider when thinking about electric grid tie-in, according to the State of Rhode Island’s Office of Energy Resources (OER): Don’t count on your panels to work when the power is out during a storm. They will not operate when the grid is down. To achieve maximum production, solar panels should be facing due south, so check your roof for placement. The structural condition of the home’s roof must be sound before panels are installed and check for shading of trees, a they can affect the sun’s path. Some maintenance is required, including making sure the panels are clean and replacing the inverter box, probably once during the lifetime of the system.

Dana Weinberg from Sunwatt Solar, a full service residential and small commercial solar installer based in Pawtucket, advises making sure solar companies under consideration are not subcontracting out the installation. “We get calls from people who have had systems installed, and when an issue comes up they can’t track down who actually did the installation. Look for a local company who does it all in-house,” he says. He also suggests checking contracts carefully for hidden fees if financing is offered and making sure that not only the equipment is warrantied but labor is as well.

“If not, in the event that something needs to be repaired, you’re on the hook paying for an electrician or a roofer.”

And while batteries are an option as a backup for power outages, they don’t store solar energy for long, so the best bet is adding a generator, he says.

With Rhode Island pledging to become the first state with 100 percent renewable electricity by 2030, energy efficient residents are already jumping on board.

“Solar power is necessary for us to combat climate change. It’s absolutely fantastic,” says Frank DiMauro. “There is no question we should be doing it, but be careful in the process. Do your homework, make sure you’re working with the right people, that it’s financially practical and then make the best decision for your family.”