Rising seas will soon — much sooner than anyone imagined — inundate beloved parts of Little Compton, Westport and Tiverton.

A new forecast (see separate story) calls for an … 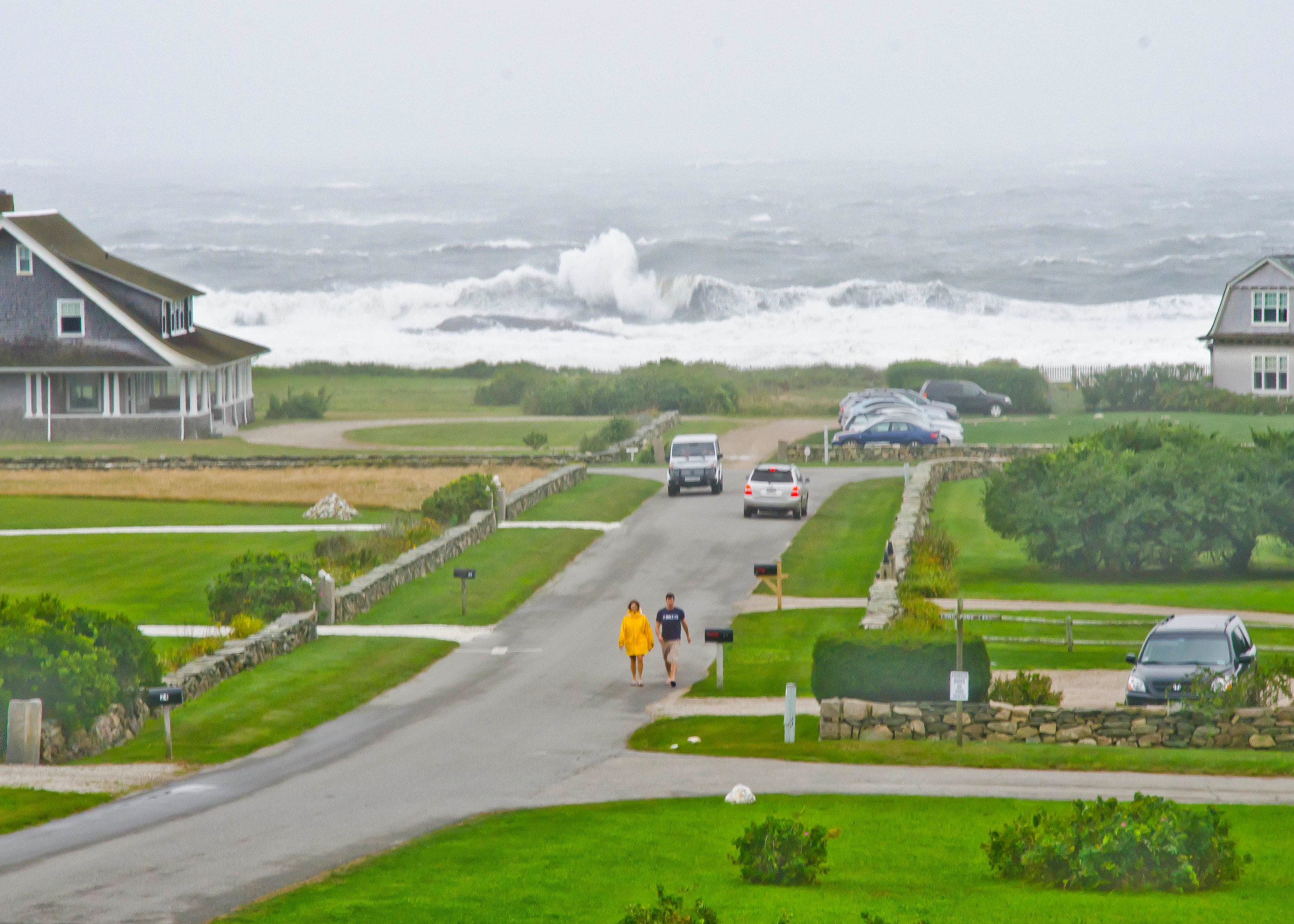 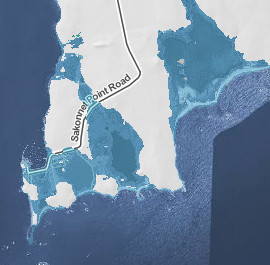 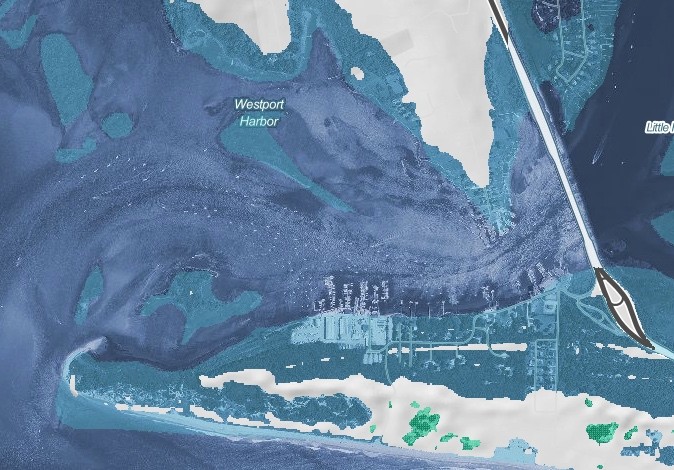 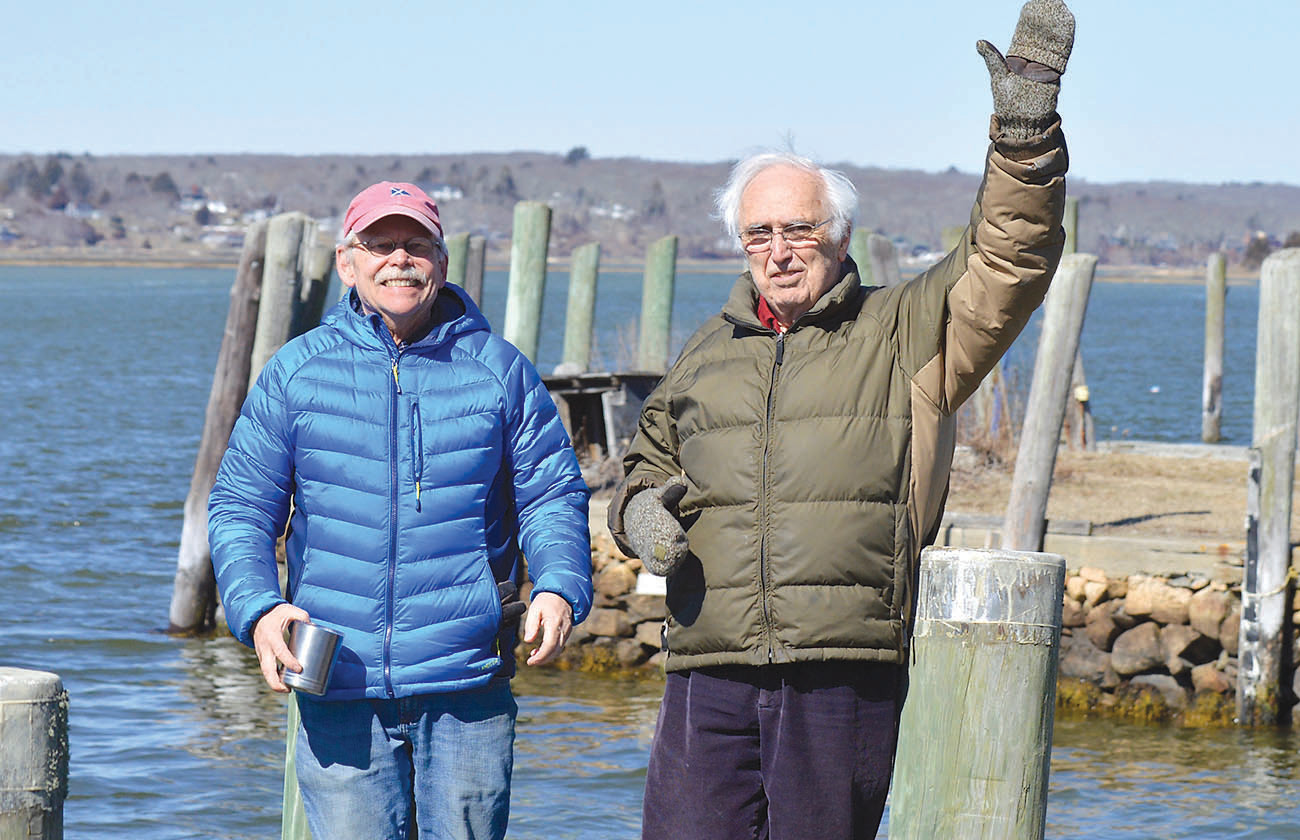 Jim Whitin, chairman of the Westport Planning Board, and David Cole of the Westport Watershed Alliance stand on town docks that are predicted to be deep underwater by century’s end. Tides would rise above Mr. Cole’s outstretched arm. The two have launched the South Coast Climate Change Coalition in hopes of helping prepare for the changes to come.
Jim McGaw
Previous Next
Posted Monday, March 27, 2017 11:14 am
By Bruce Burdett

Rising seas will soon — much sooner than anyone imagined — inundate beloved parts of Little Compton, Westport and Tiverton.
A new forecast calls for an ocean rise of nearly ten feet here, not a thousand years from now but by 2100 — within the lifetimes of those in our youngest generation. It is happening three to four times faster along the East Coast north to Massachusetts than the global average.
Local experts and observers are trying to get their heads around the enormity of that number.
Jim Whitin, chairman of the Westport Planning Board, said that as he drives the Westport-Little Compton area, he can’t help but imagine the impact and how it will change the map, not to mention the economy and character of the region.
“The fishing pier at Westport Point — it will be gone and with it some of the Point.”
Across the harbor, “Tripp’s Boatyard — I can’t imagine it surviving a ten foot sea rise … And without it, without the docks — that will wipe out the ability of people to get access to the harbor and river …The harbor is an economic engine for Westport. If you lose that barrier beach … “
The marshes would disappear — “It’s already happening. We’re already losing them at an alarming rate — you can see it year to year.” And with the marshes will go much of the coastal sea and bird life.
Up river, “Even way up at Head of Westport the impact could be extreme … The Head of Westport is like a little Bay of Fundy — there is more tidal surge as the river narrows up there.”
Without barrier beaches, “Cockeast Pond would be part of the ocean … We’ll lose all of the big coastal ponds from Westport to Little Compton — Briggs Marsh in Little Compton, Quicksand Pond, Round Pond, Richmond Pond … “
The water would inundate sections up and along River Road, “And septic systems everywhere will have their feet in the water table.”
The sea should silence some contentious Westport issues.
Open Beach Avenue to cars? The ‘road, that beach — the whole strip will be long gone.
Pave East Beach Road? It, too, will be among the first to go, along with most of the barrier beaches that protect the town’s harbor, river and coastal ponds.
David Cole lives five houses up the road from Westport Point at an elevation of 14 feet. The new forecast means that this will be waterfront property by the end of the century.
“The water will be lapping up to the doorstep,” and without whole sections of that barrier beach, that water might be a good deal rougher than what the harbor sees now.
“The docks, everything to the south of me, would be under water,” he said.
“And all that foofaraw about Beach Avenue? The Knubble will be a little rock island.”
As bad as ten feet sounds, it gets worse if you add the storm surge that a hurricane or tropical storm would bring, he added.
It is all daunting, Mr. Cole said, but these towns must do what they can to prepare.
Recently, Mr. Cole and Mr. Whitin launched the South Coast Climate Change Coalition.
“We are hoping to involve individuals and organization from all across the South Coast from Little Compton to Wareham” to address challenges posed by rising seas.
The causes of the catastrophe are global, they say, but much of the planning and reaction must be local.
Mr. Whitin cites marsh saving work being done in places including Tiverton, where Sapowet Marsh is gradually being pushed uphill ahead of the rising water.
“It’s a good strategy — the marshes are critical to everything and this buys time.”
But it’s a difficult strategy for Westport where the shore rises more abruptly in many places. “Along much of our waterfront, there is no place to move a marsh.”
Important, too, he said, is discouraging development in areas that the forecast suggests are threatened by seawater rise.
“Putting them in harm’s way but simply building them taller isn’t going to work.”

Little Compton, Tiverton
Much of Little Compton’s Sakonnet Point will be but a memory.
The point itself, with an elevation of about eight feet, would be an early casualty, along with the town’s fishing docks, yacht club and the Sakonnet Point Club.
The latest town plan, still being drawn up, talks of the need to protect the area and mentions possible breakwater extension at the harbor’s north end. That breakwater will need to be mighty tall and stout.
Planning Board Chairman Mike Steers said that any plan must “recognize that with sea rise comes the potential for considerable disruption at the point and areas just to the east around the ponds and toward Goosewing.”
The town’s beaches — Goosewing, South Shore and others — will be driven well inland, likely over and beyond the large coastal ponds and marshes, suggest maps drawn up by federal and state planners.
While much of Tiverton sits on relatively high ground, other parts would be at extreme peril.
Those maps put large swaths of Fogland and Seapowet, along with adjoining farmland and neighborhoods, underwater or too close for comfort.
A ten-foot Sakonnet River rise would overwhelm the Stone Bridge remnants, opening Tiverton Basin to the waves and ruining the town’s harbor.
On the Tiverton side, Main Road would be underwater from the harbor south past Nanaquacket; devastation on the Portsmouth side would be more extreme — most if Island Park and Common Fence would vanish.

In Portsmouth, the new predictions spell bad news for Island Park, Common Fence Point and other low-lying areas. Portsmouth Town Planner Gary Crosby said the new estimates from NOAA didn’t exactly come from out of the blue.
“It doesn’t surprise me at all that because of the melting of the Greenland Ice Sheet and so forth they’re revising their predictions. It’s pretty scary,” Mr. Crosby said.
From his perspective, Mr. Crosby said he needs to plan for a certain level of risk going forward. “I have to address for a couple of feet of sea level rise. The window of planning that I’m doing goes out to 2040 … and the new estimates put it at three feet,” he said. “It would be irresponsible for me to say, ‘Well, the data from the tide gauges says it’s only rising an inch and a half by 50 years from now.’
“It would likely be as irresponsible for me to be doing planning based on it being nine feet higher. So there’s an in-between that I have to take as a base for the planning that we’re doing,” he said.
Last October, the town’s Planning Department invited interested parties to view a rare “King Tide” along the Island Park seawall in Island Park. The five-foot high tide, which takes place only three times annually, served to mimic what climate change scientists said will happen here nearly a third of the days of the year by 2035 or 2040.
“All you have to do is go down to Park Avenue, stand on that seawall and look around and say to yourself, ‘What the heck?’” said Mr. Crosby.
The town is currently updating its Comprehensive Community Plan and shortly before the November election, sea level rise became a political issue. Some Democrats charged that other candidates were pushing the Planning Board to remove any reference to sea level rise in the plan.
“The other thing that surprises me about that discussion is how political it is,” said Mr. Crosby. “How can something like that be characterized in political terms? I just don’t get that.”