The Mt. Hope baseball team came back to beat Moses Brown 4-3 to win their third straight game to kick off their first ever Division I campaign with a 3-0 record. The Huskies 9 swept Middletown in a … 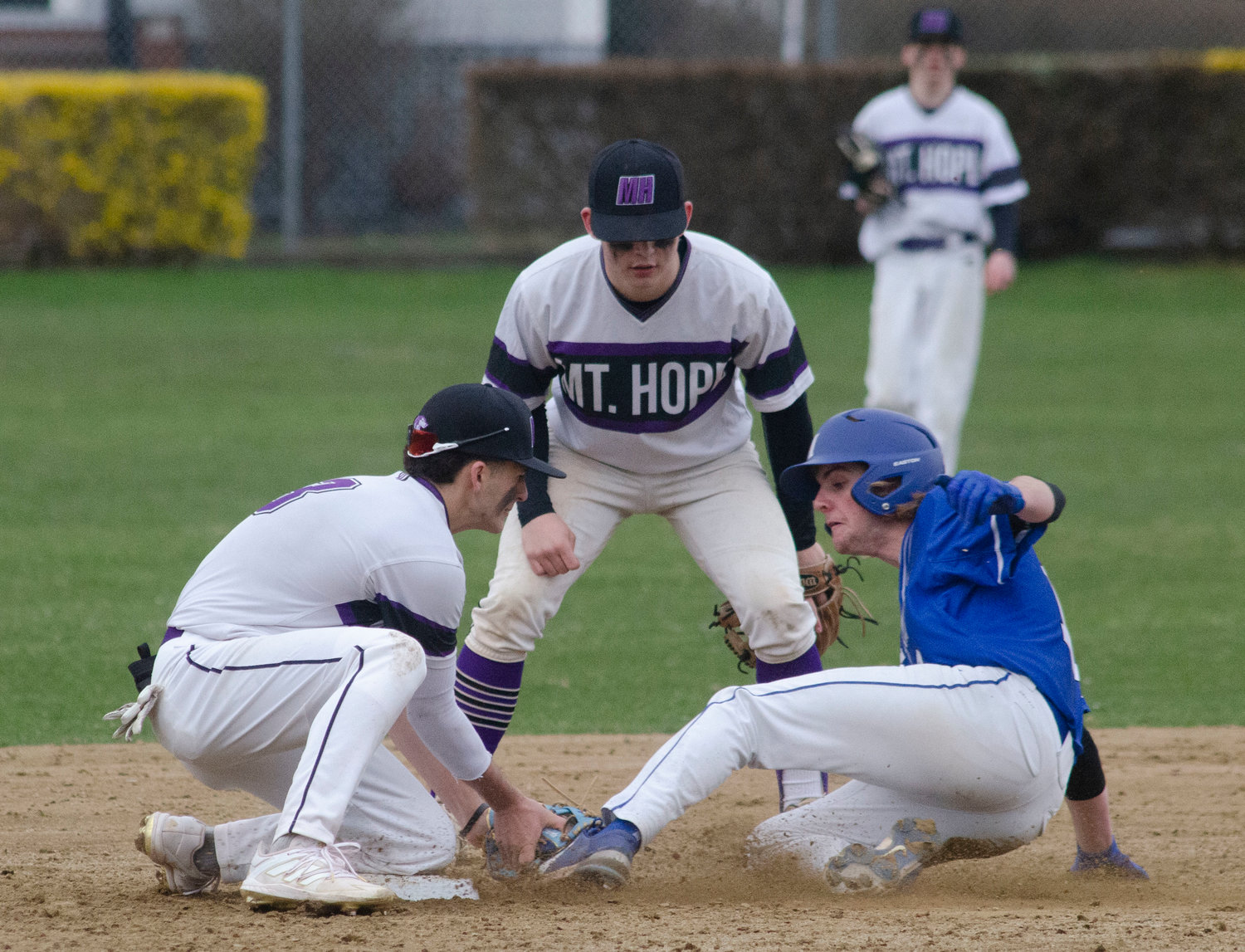 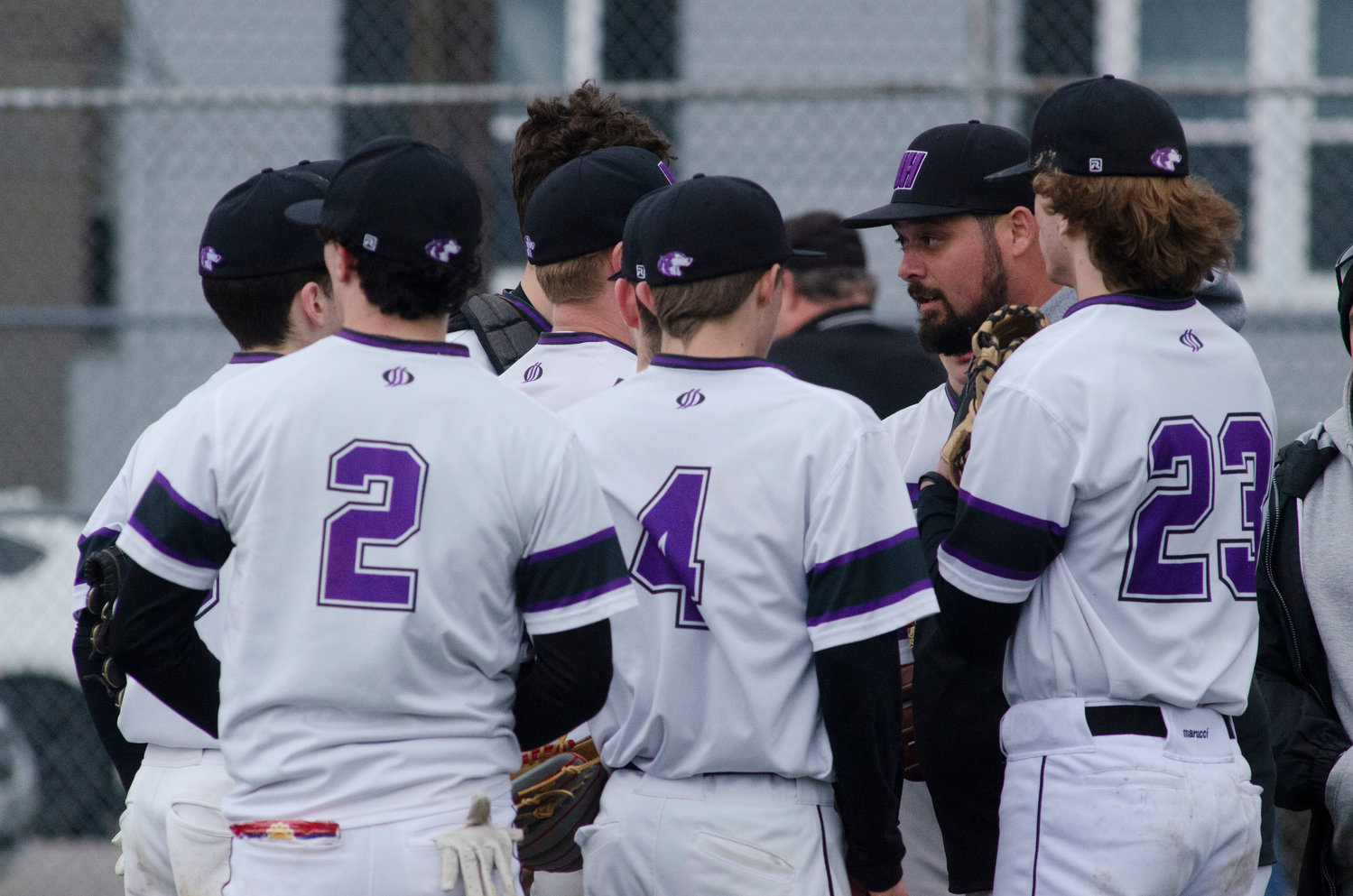 Huskies head coach Mike Mazzarella (right) speaks to the team during a time out, in the team's second game against Middletown on Thursday night.
Photos by Richard W. Dionne, Jr. 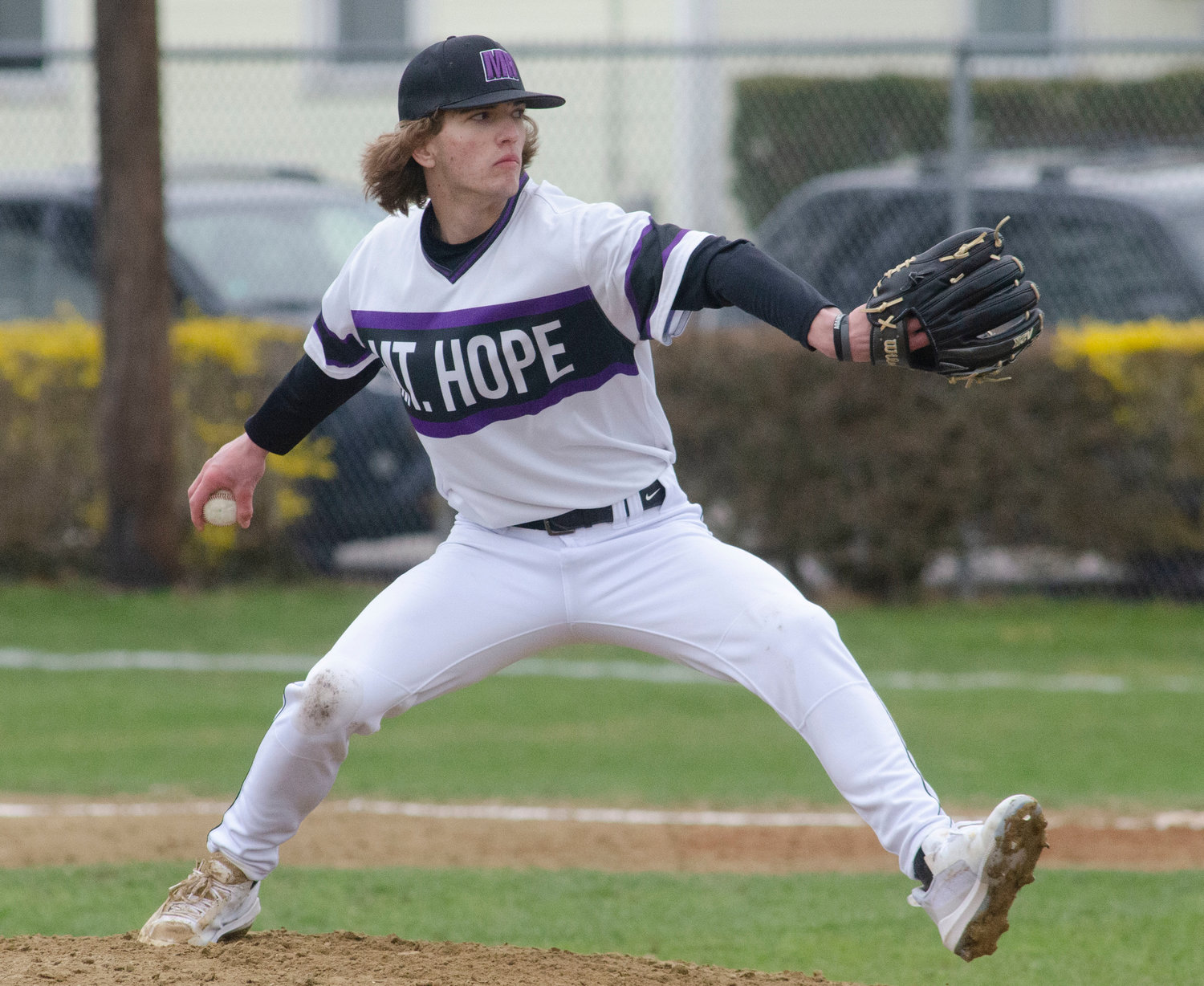 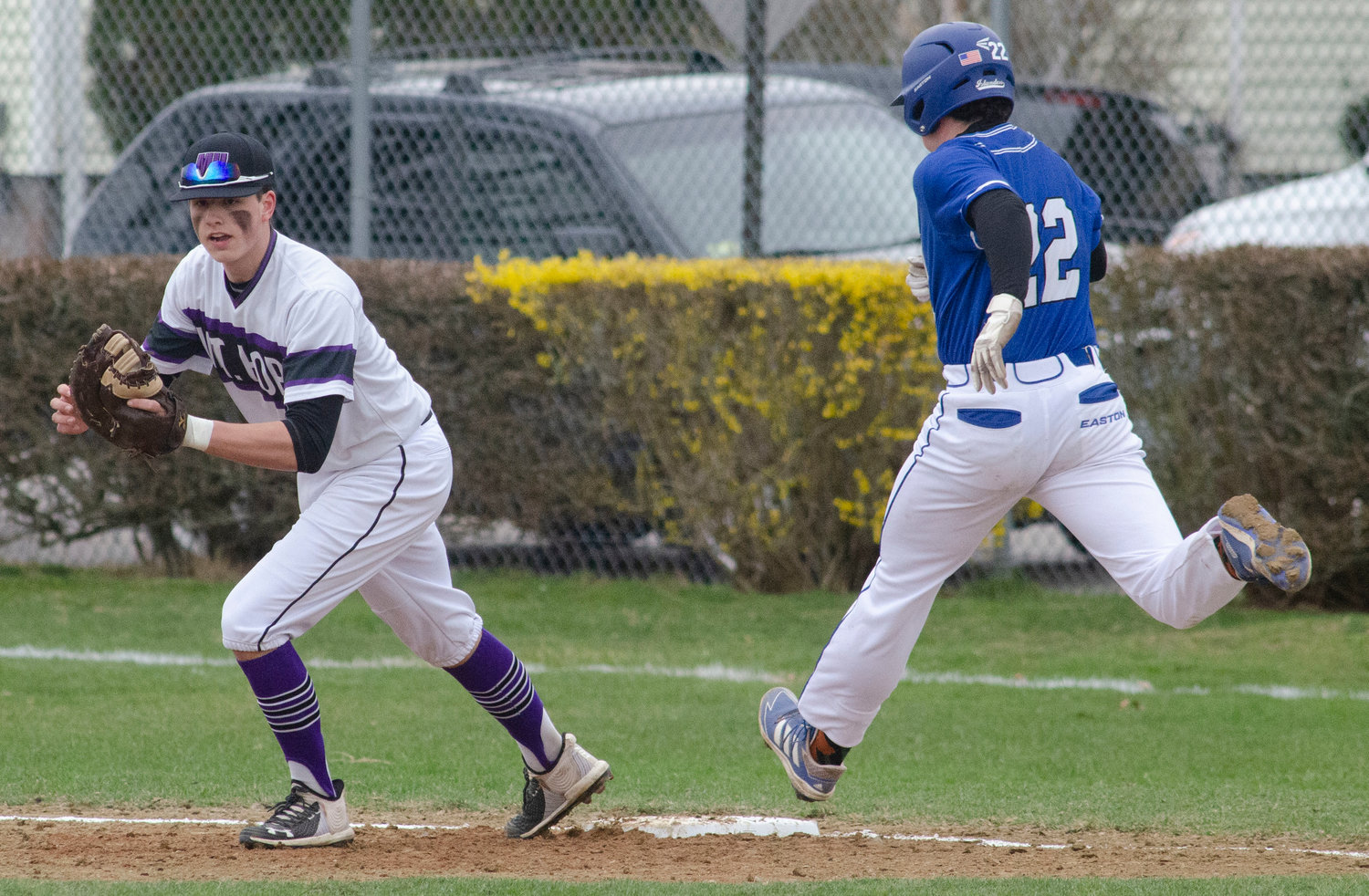 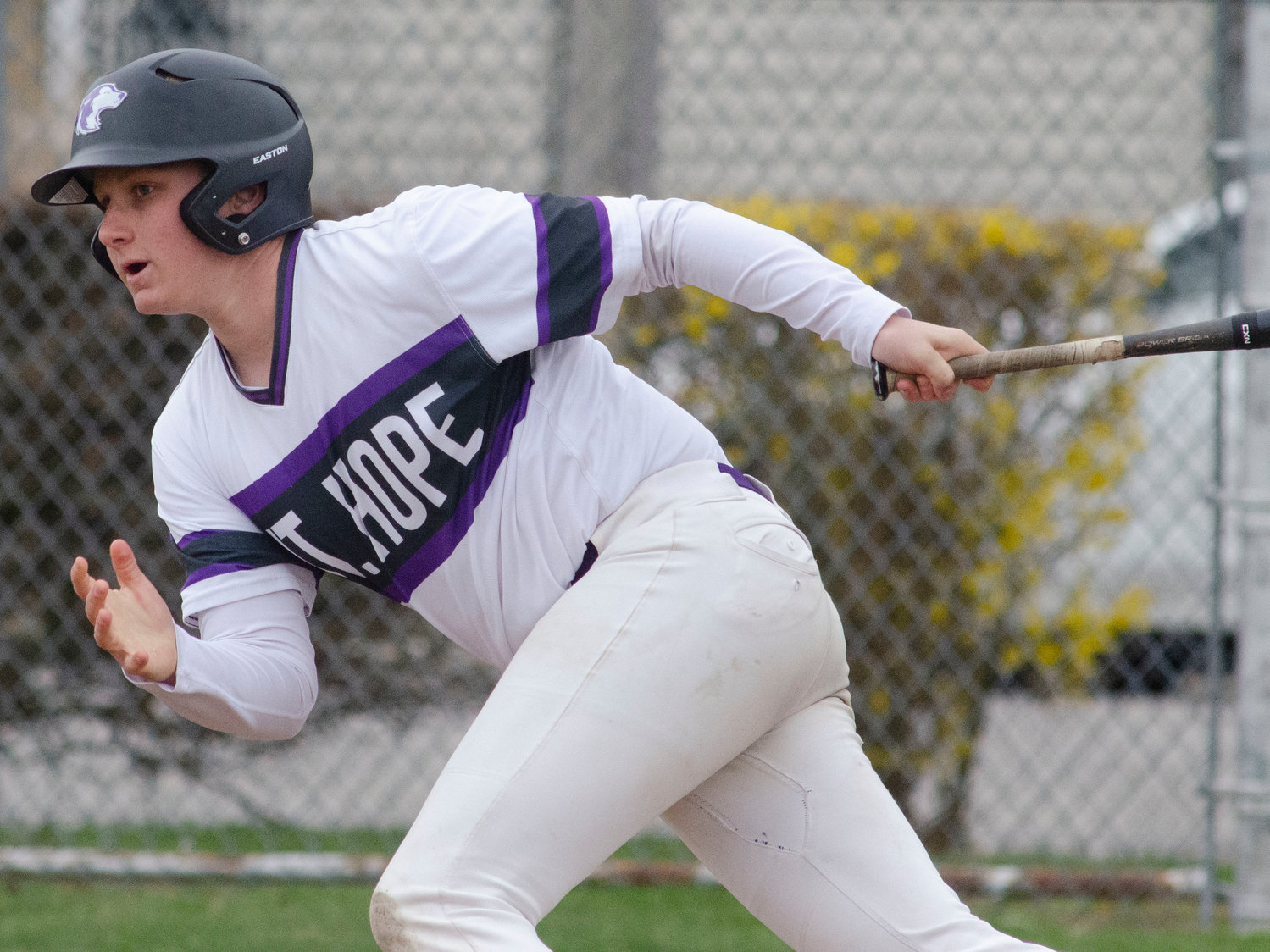 AJ Jones has pitched well thus far with 2 wins and a save. The right hander has also collected seven hits during the team’s three games.
Photo by Richard W. Dionne, Jr. 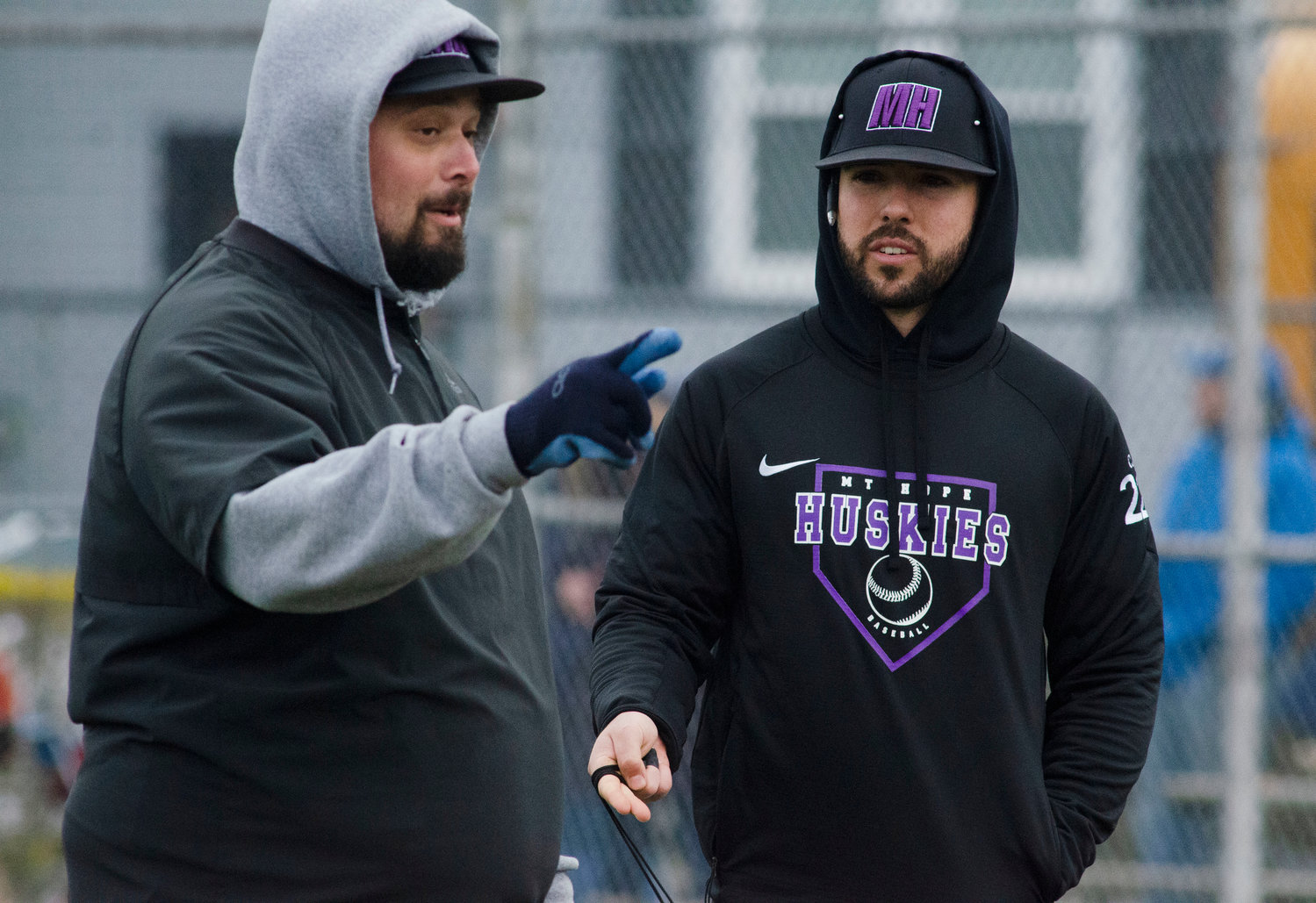 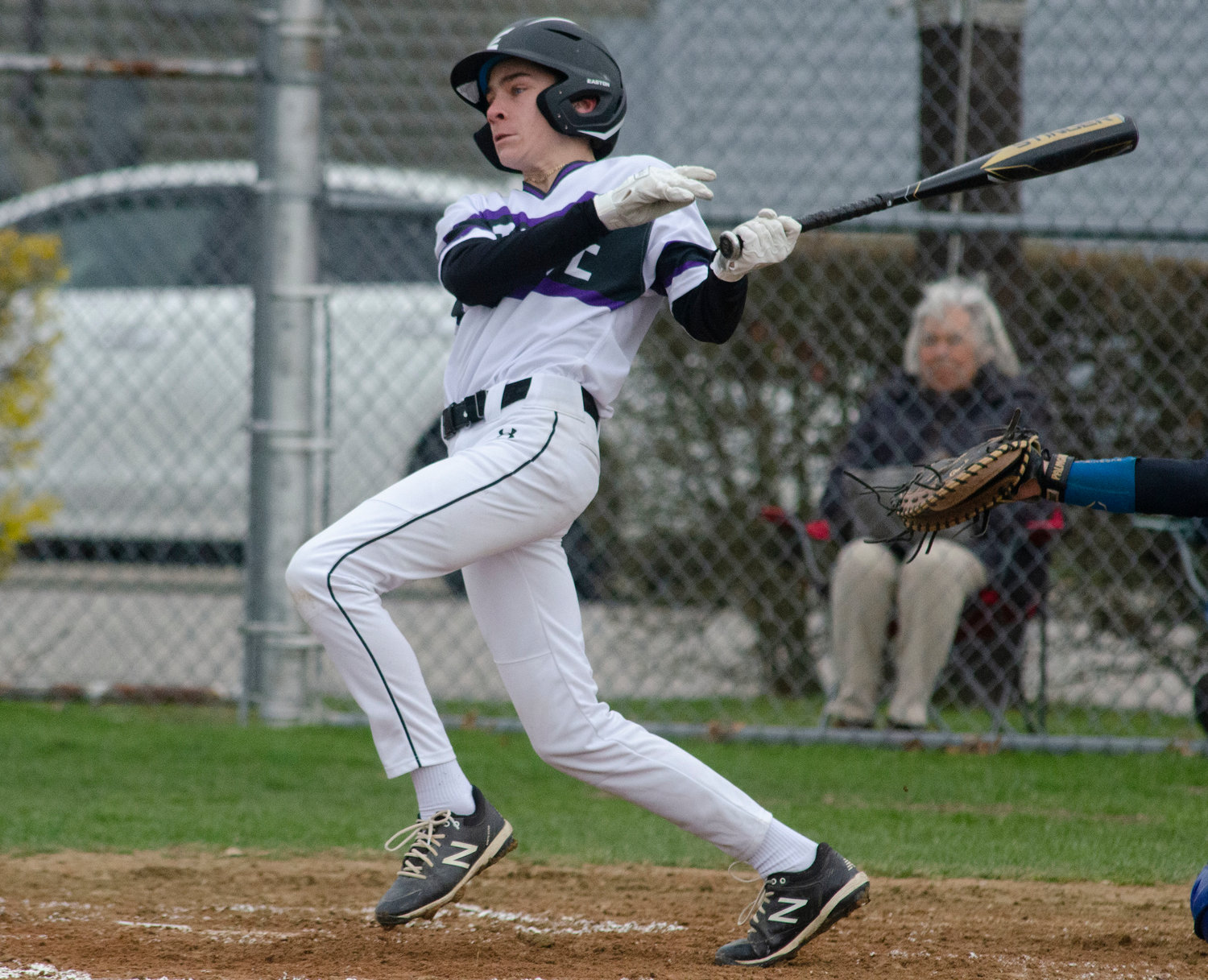 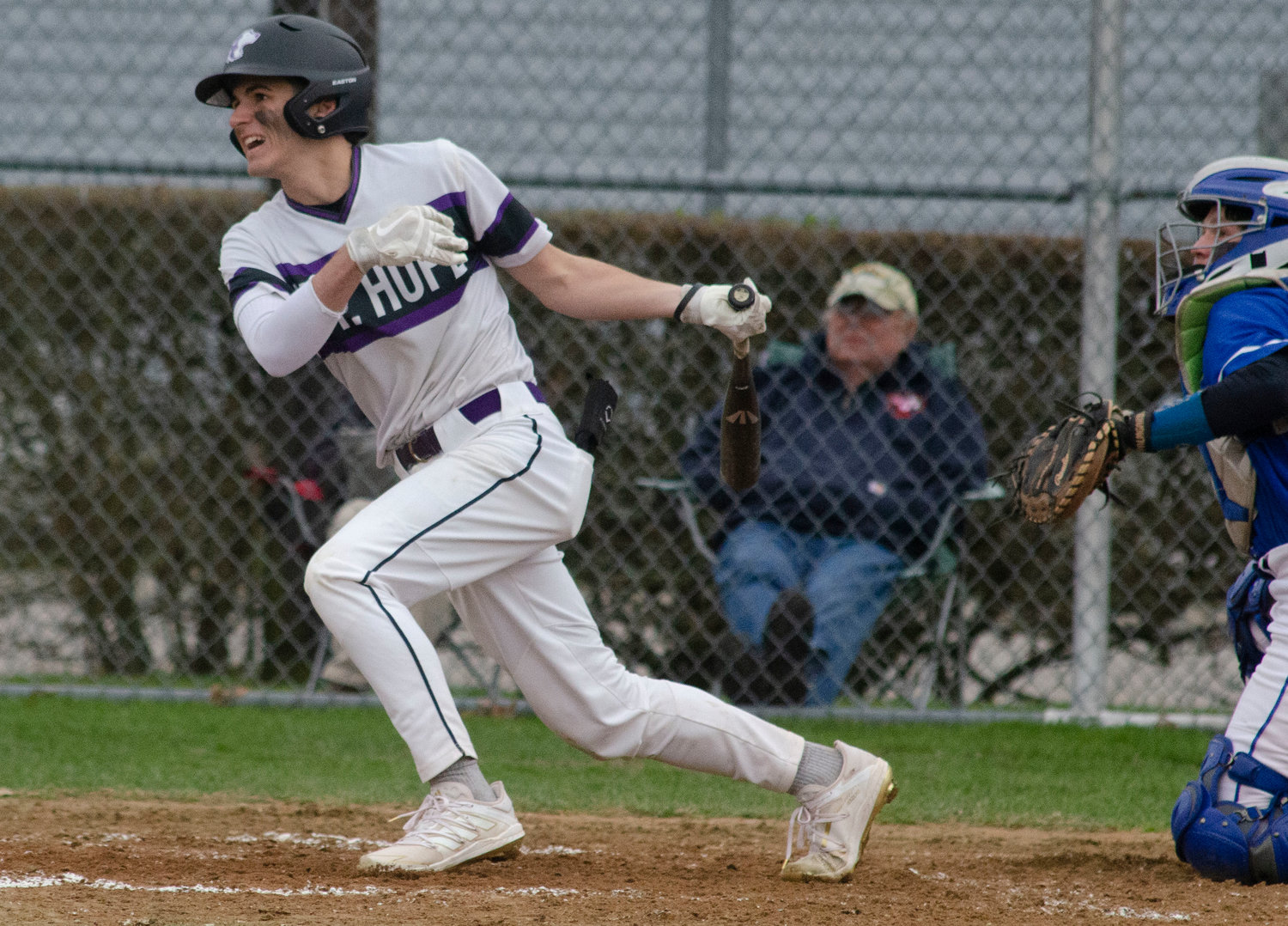 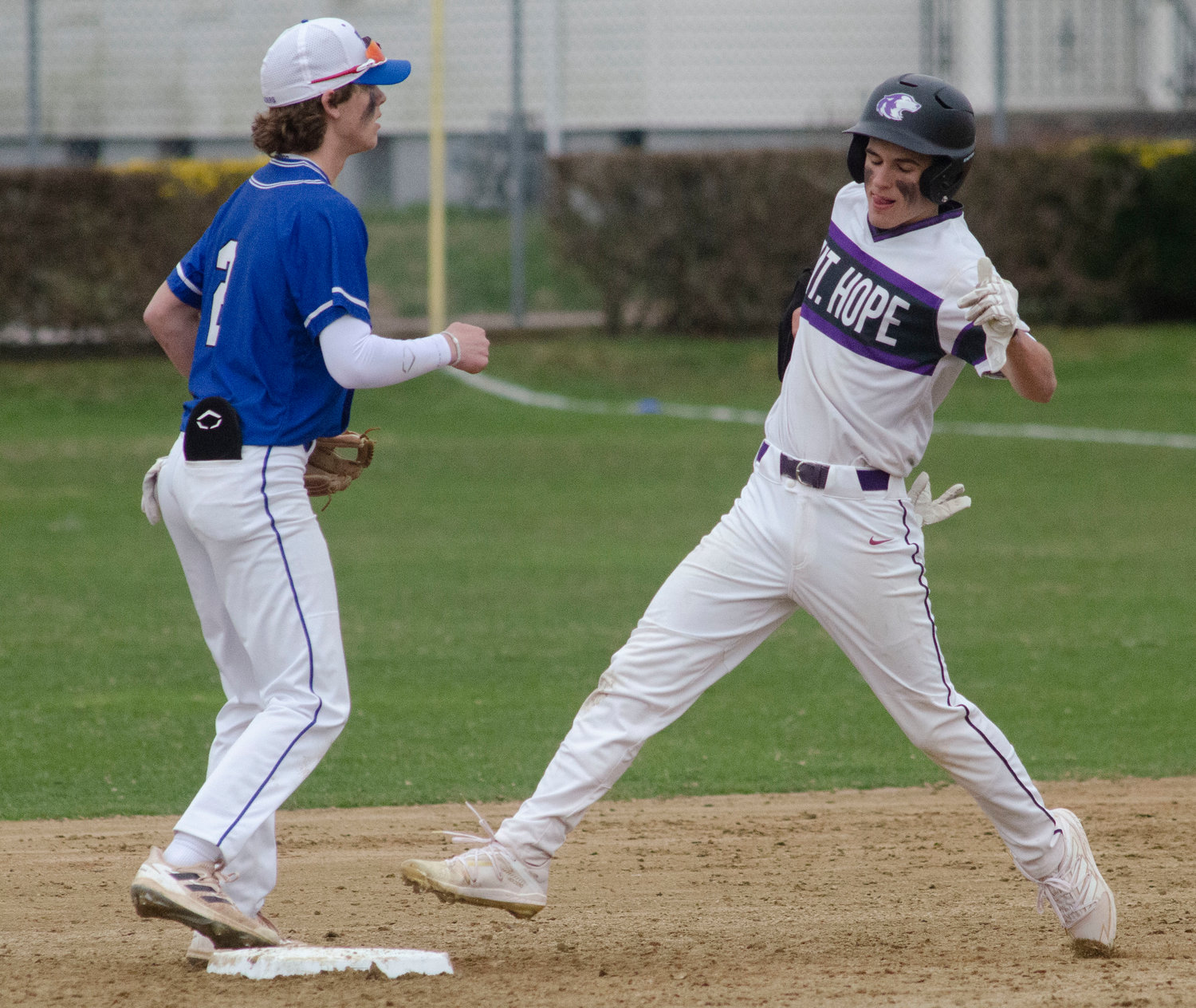 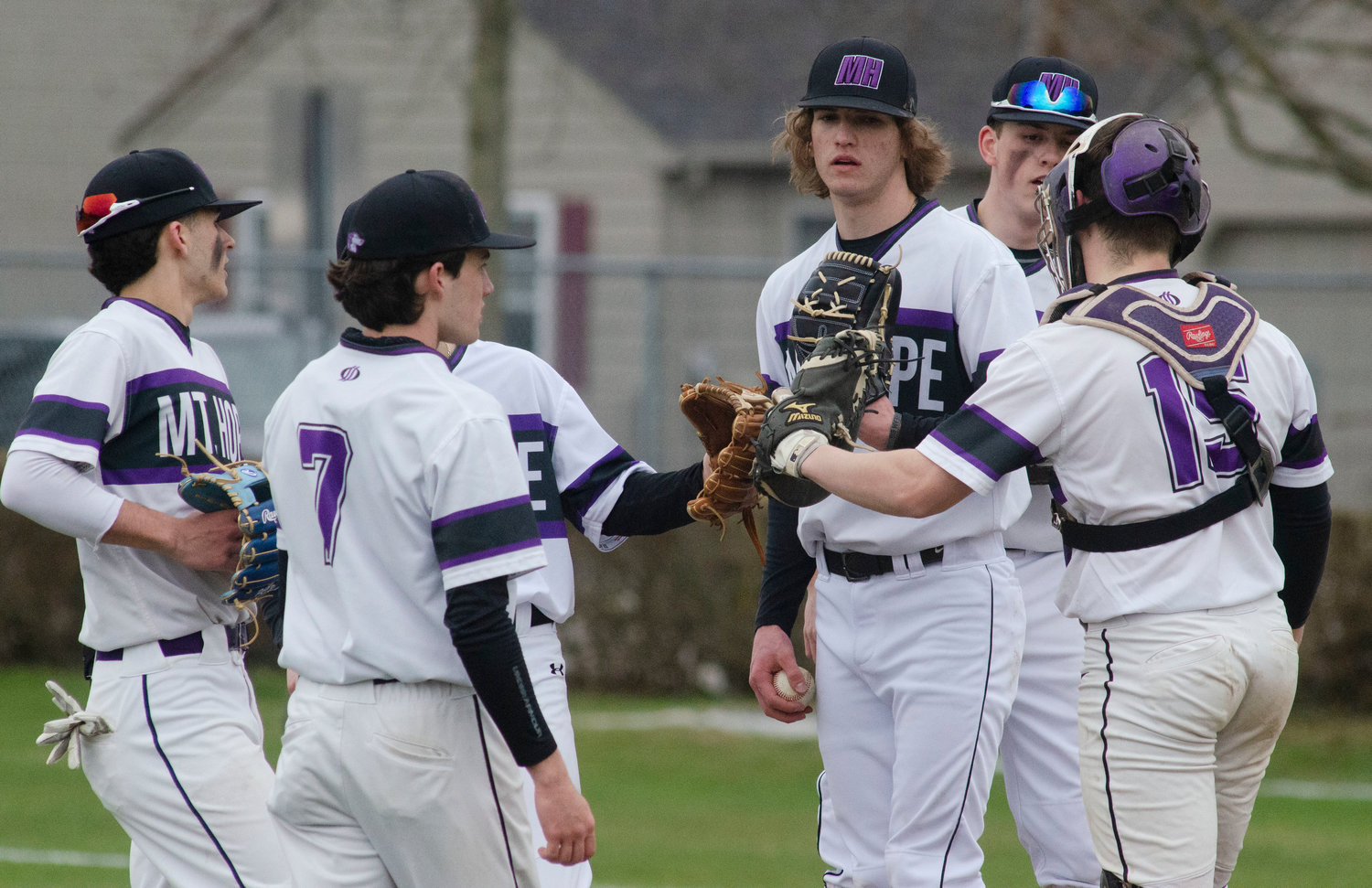 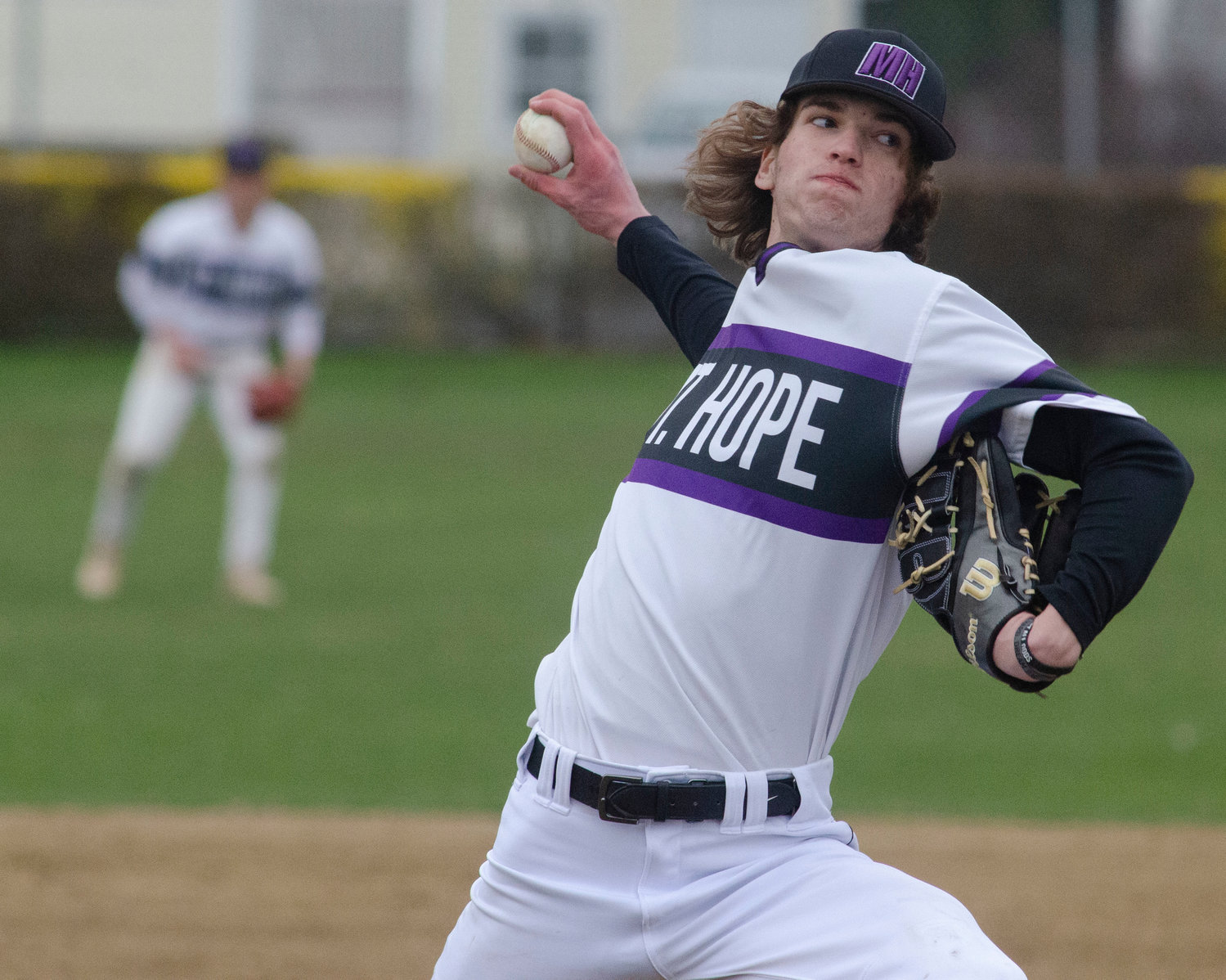 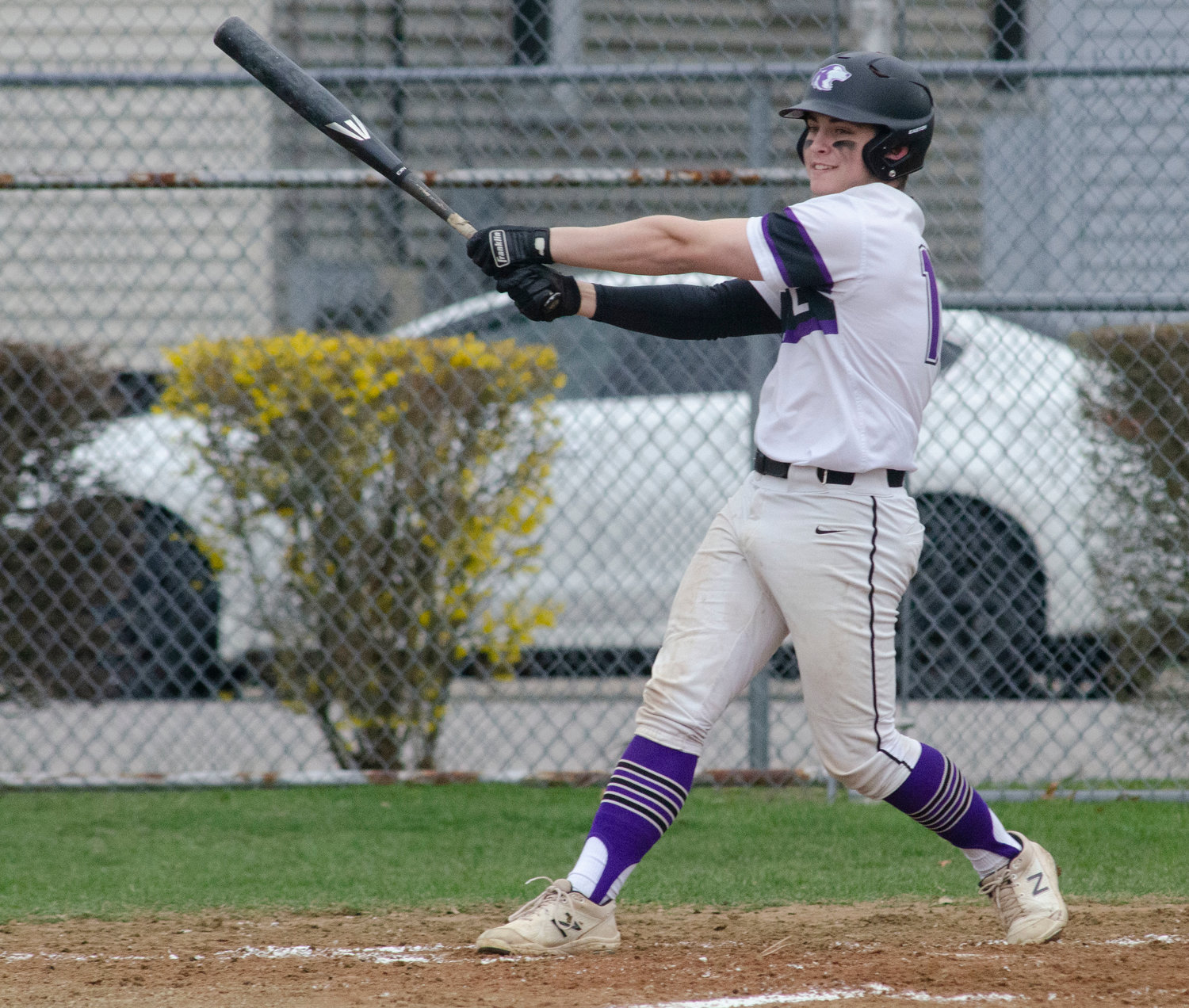 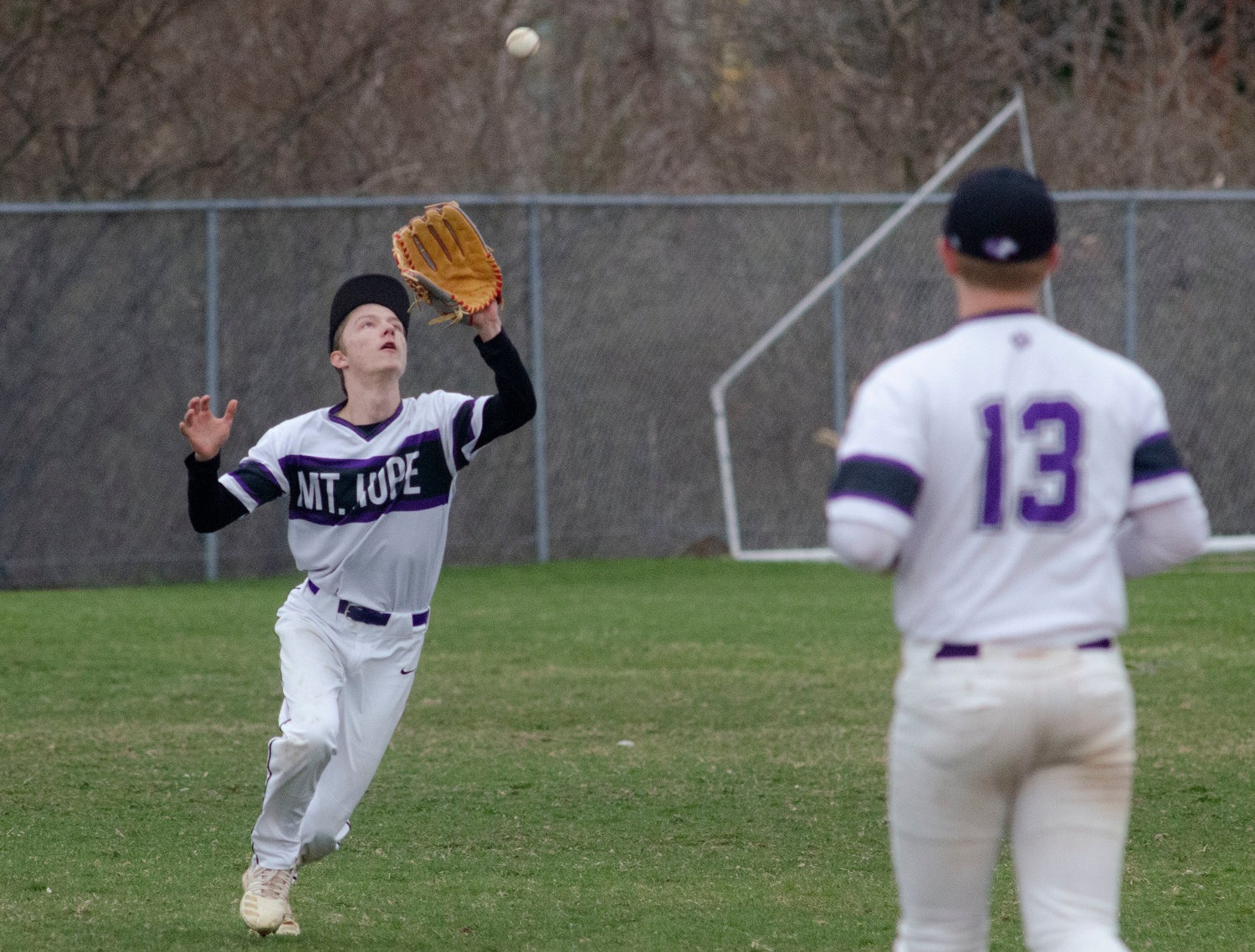 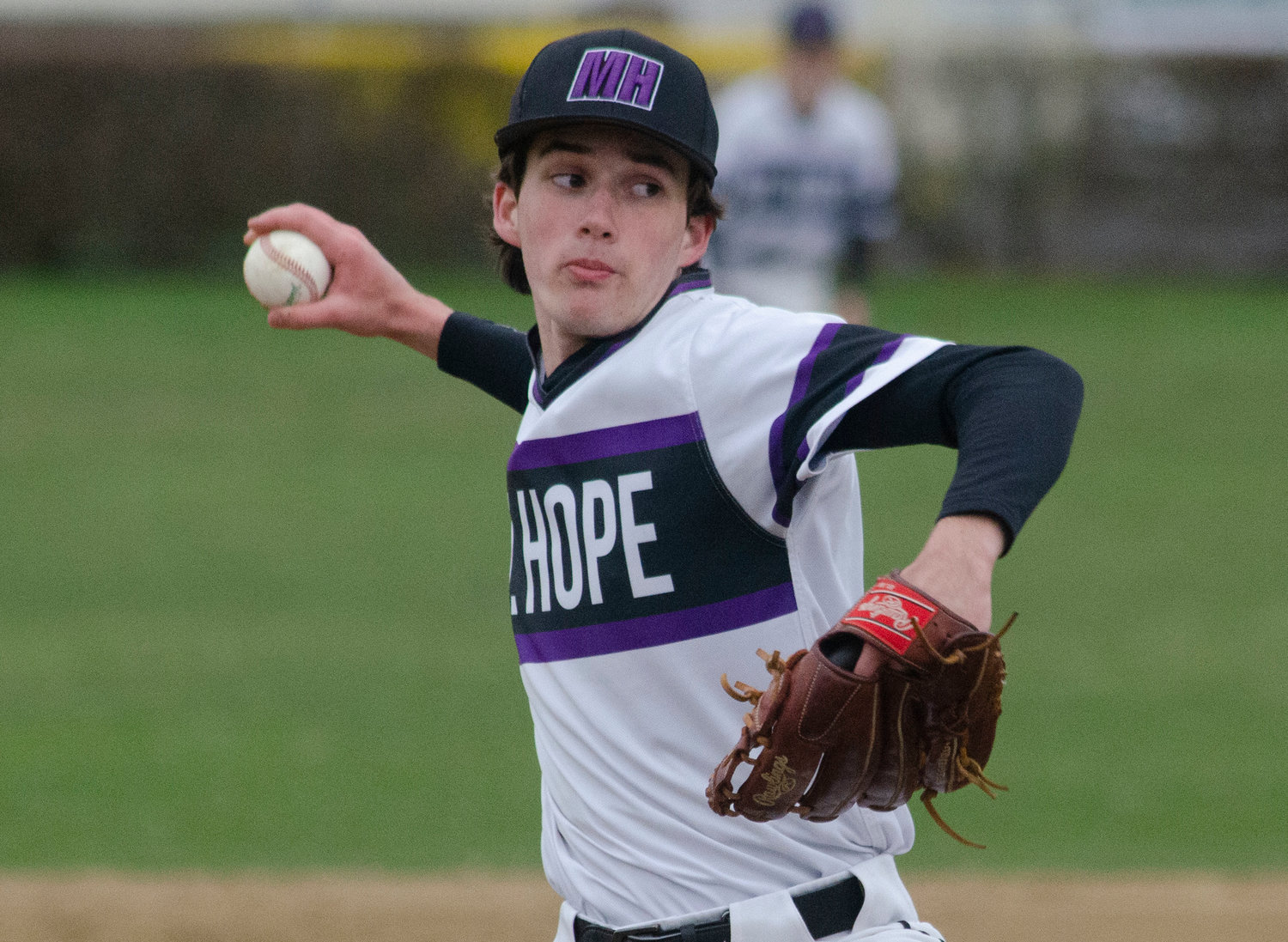 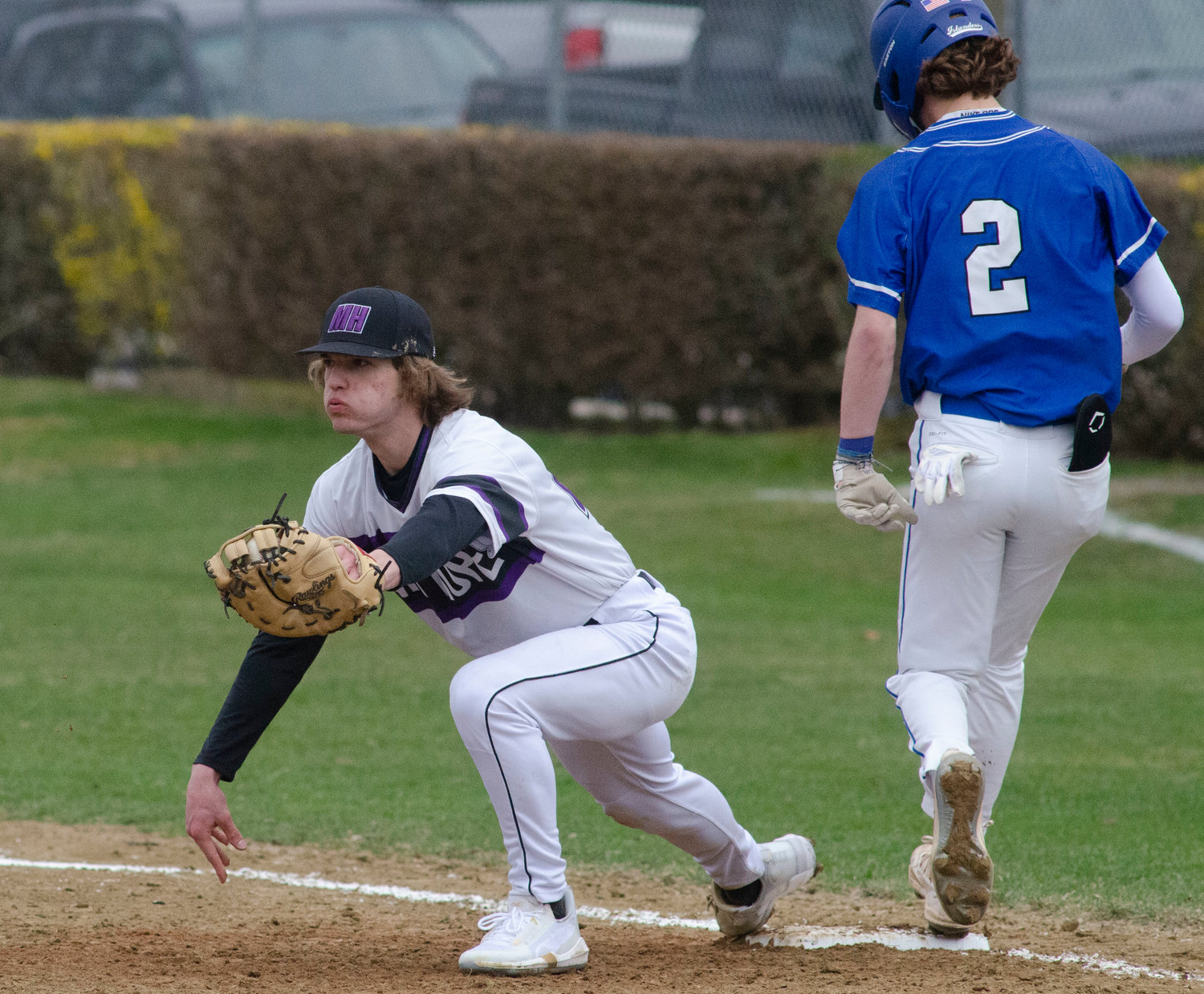 First baseman Brad Denson snares a throw from Parker Camelo to record an out at first base in the team's second game against Middletown at Guiteras Field. 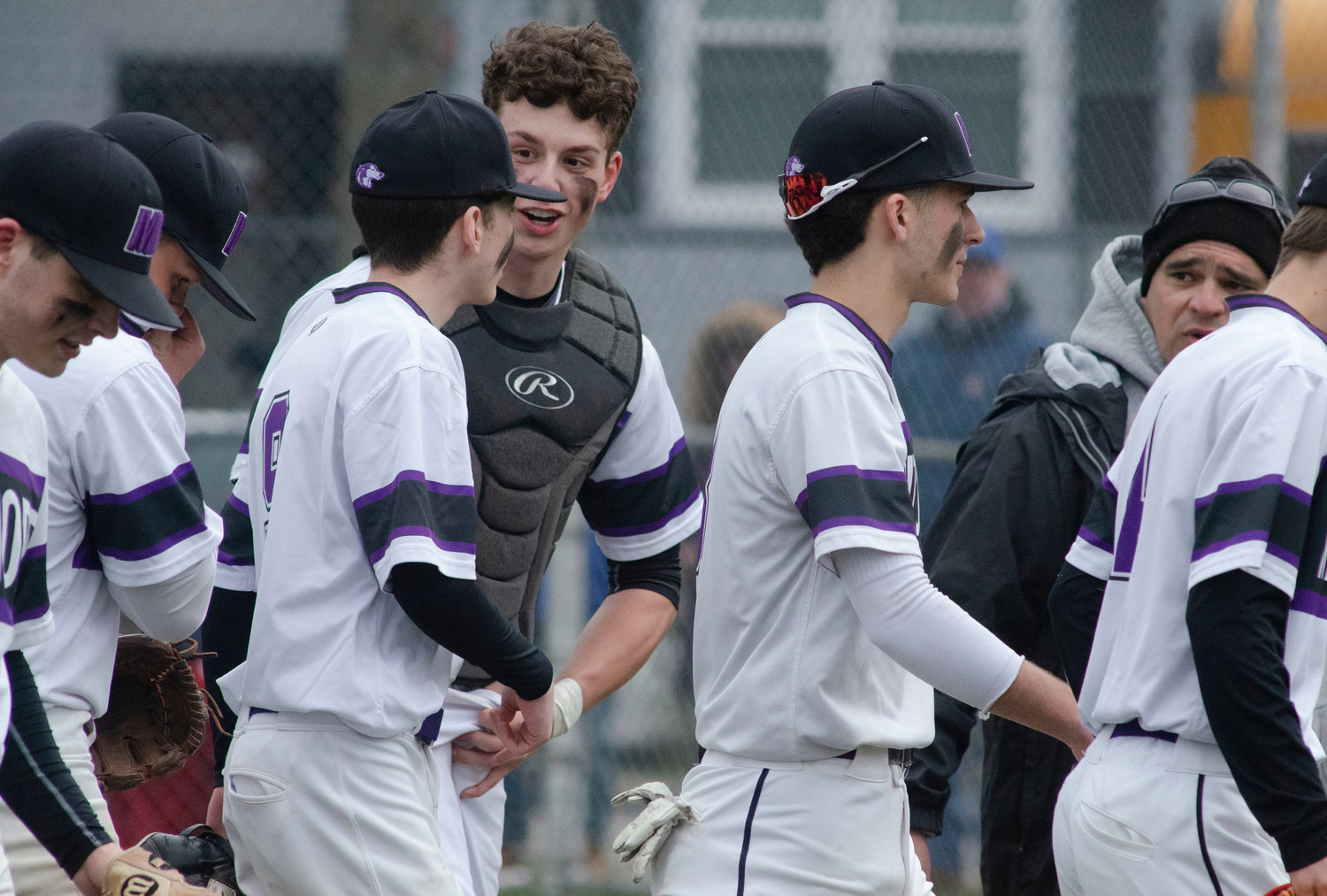 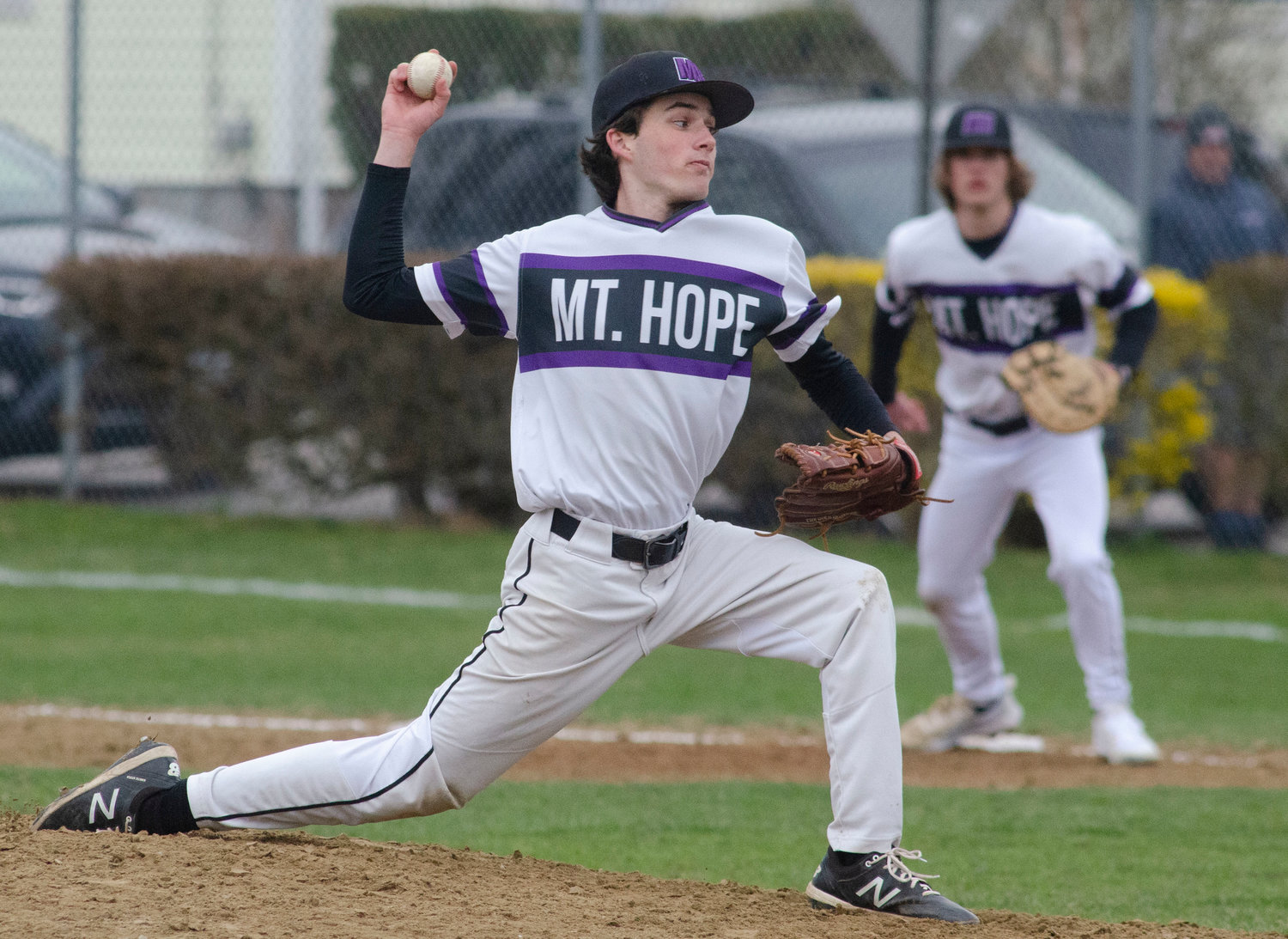 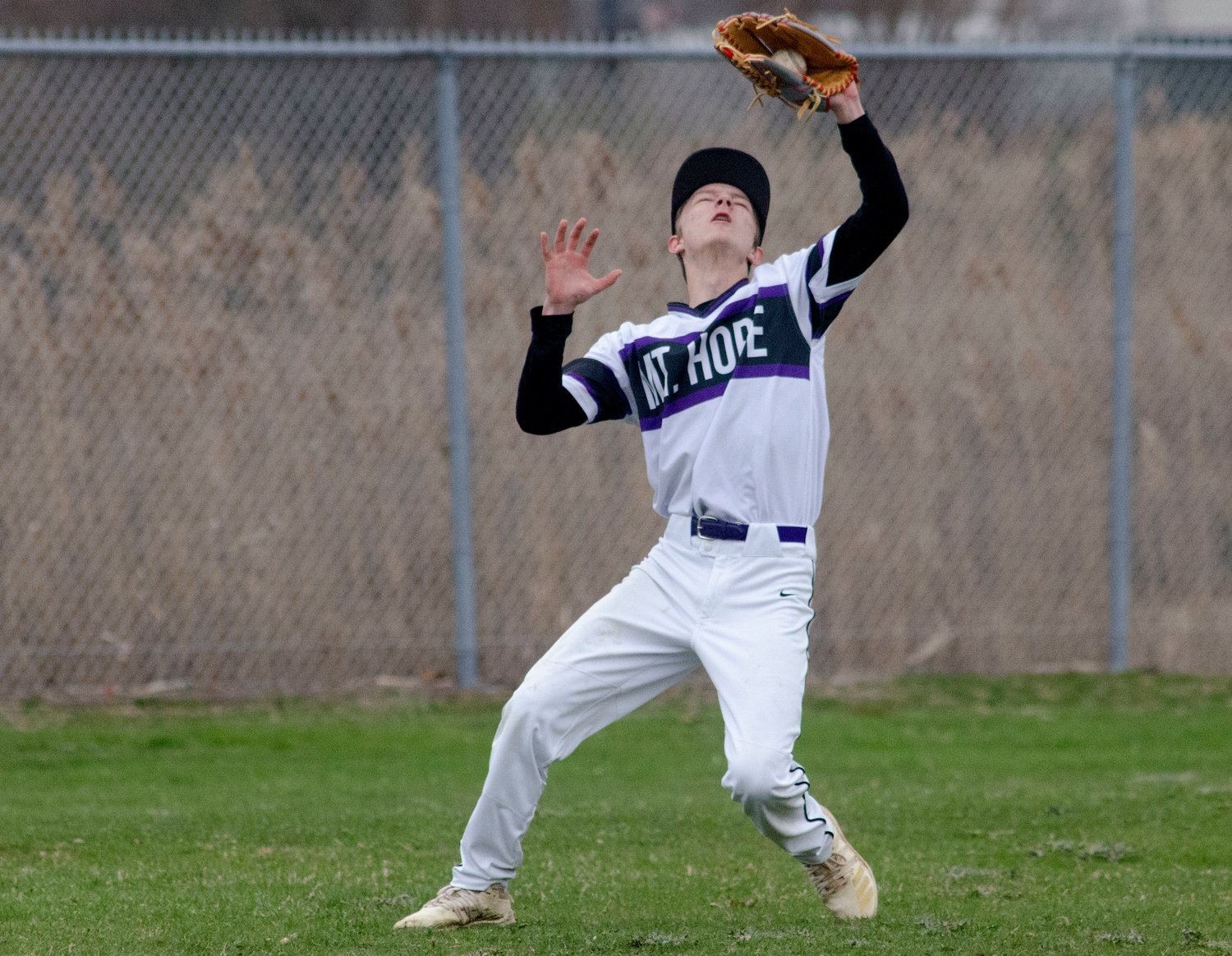 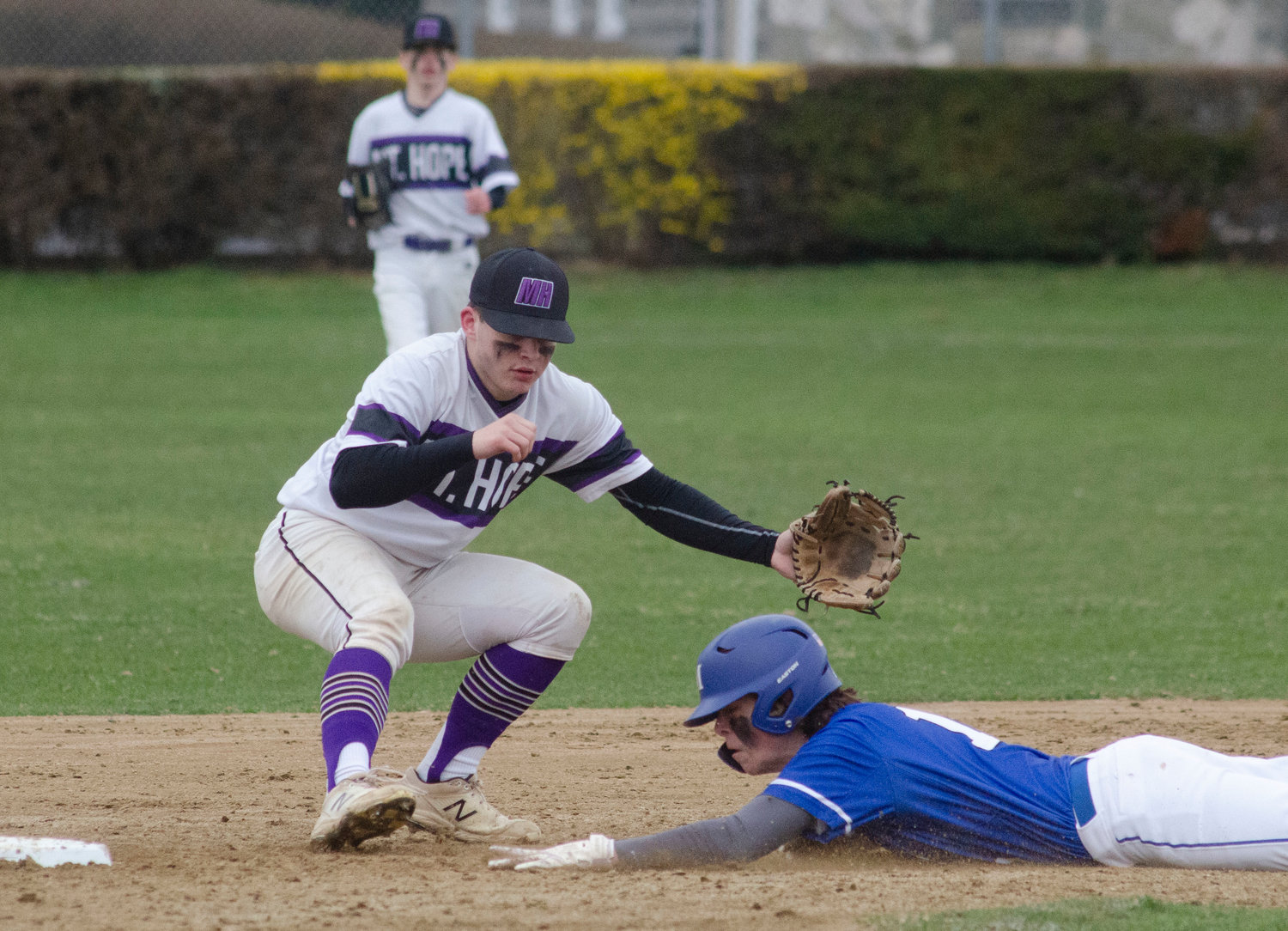 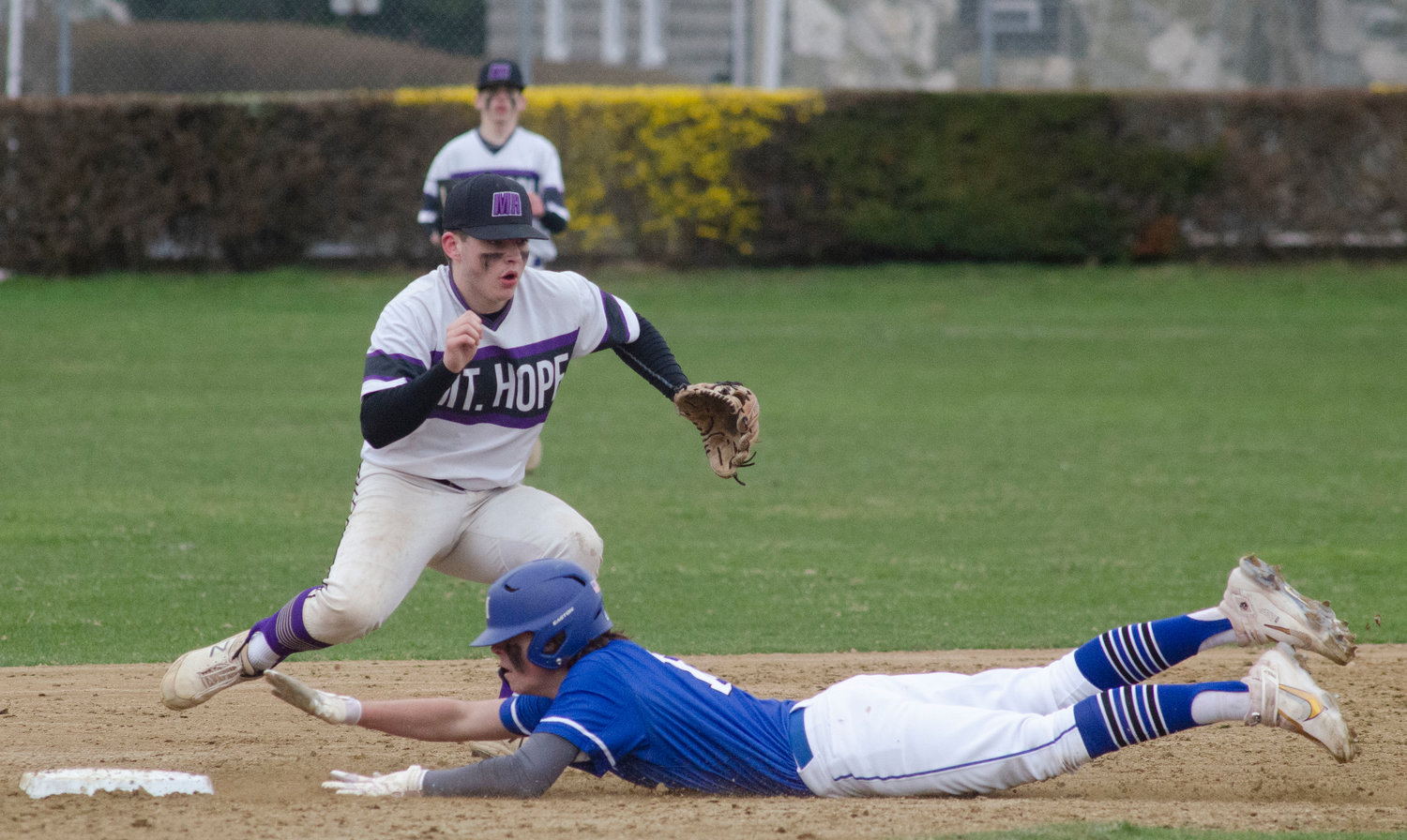 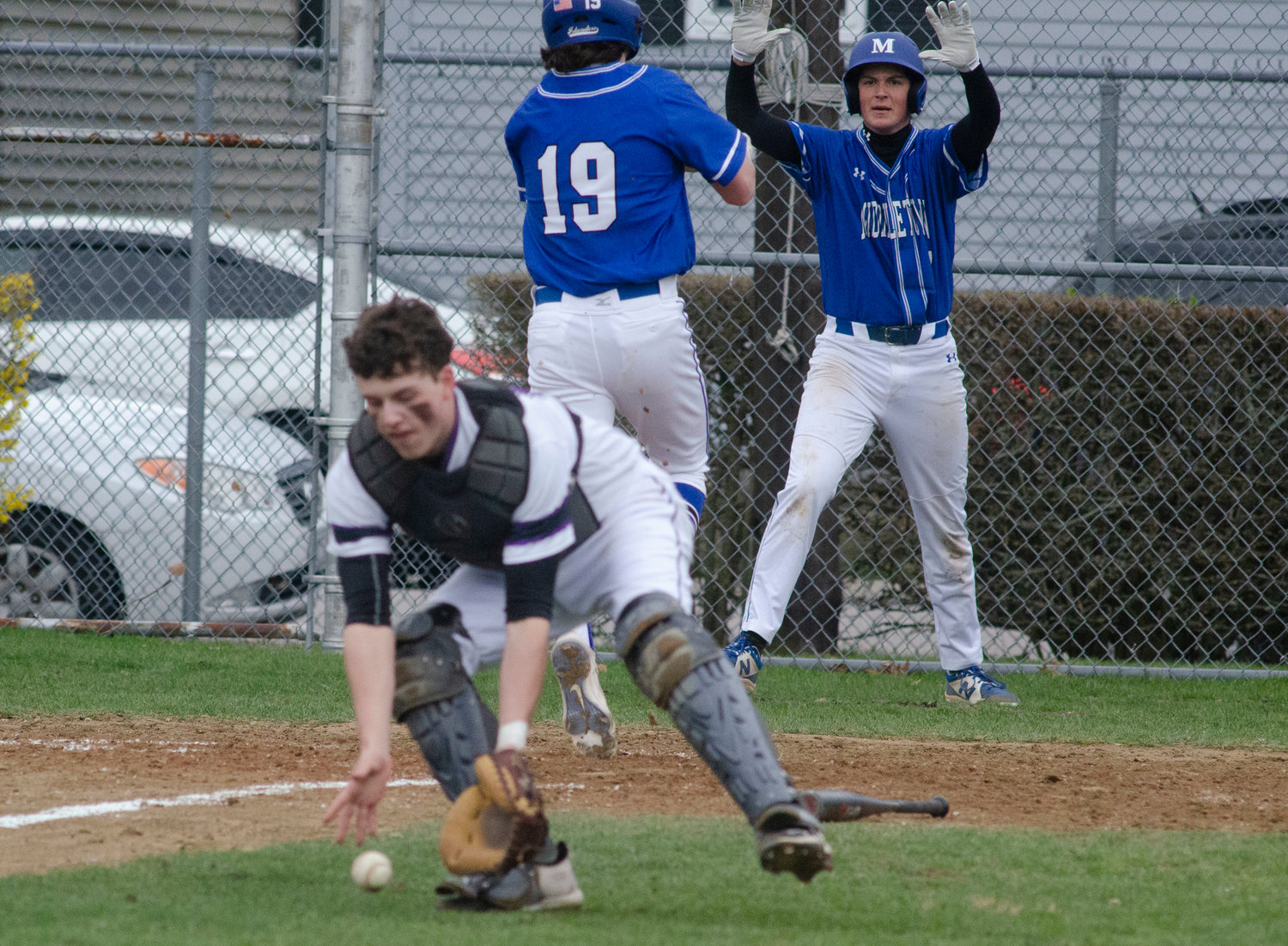 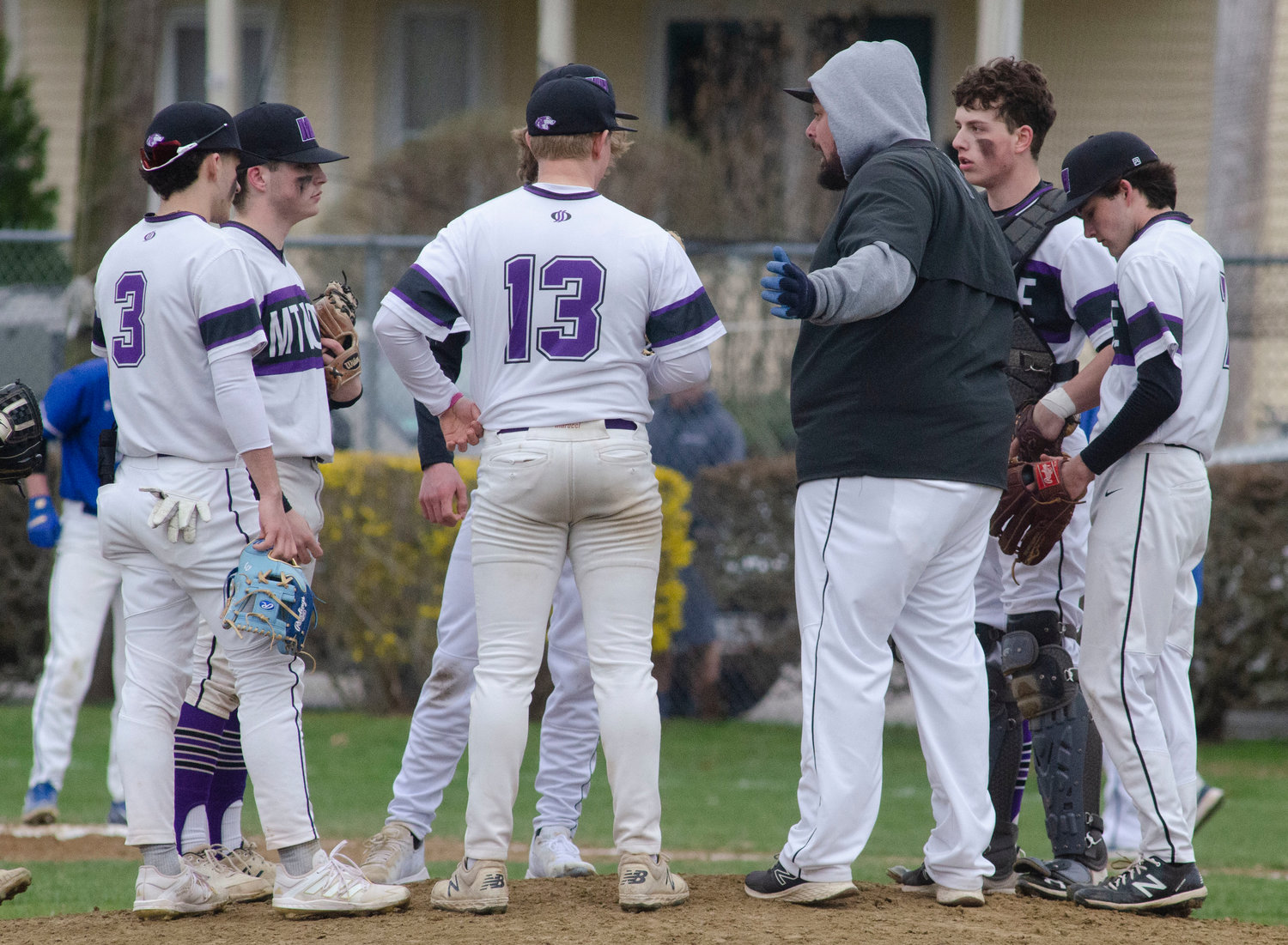 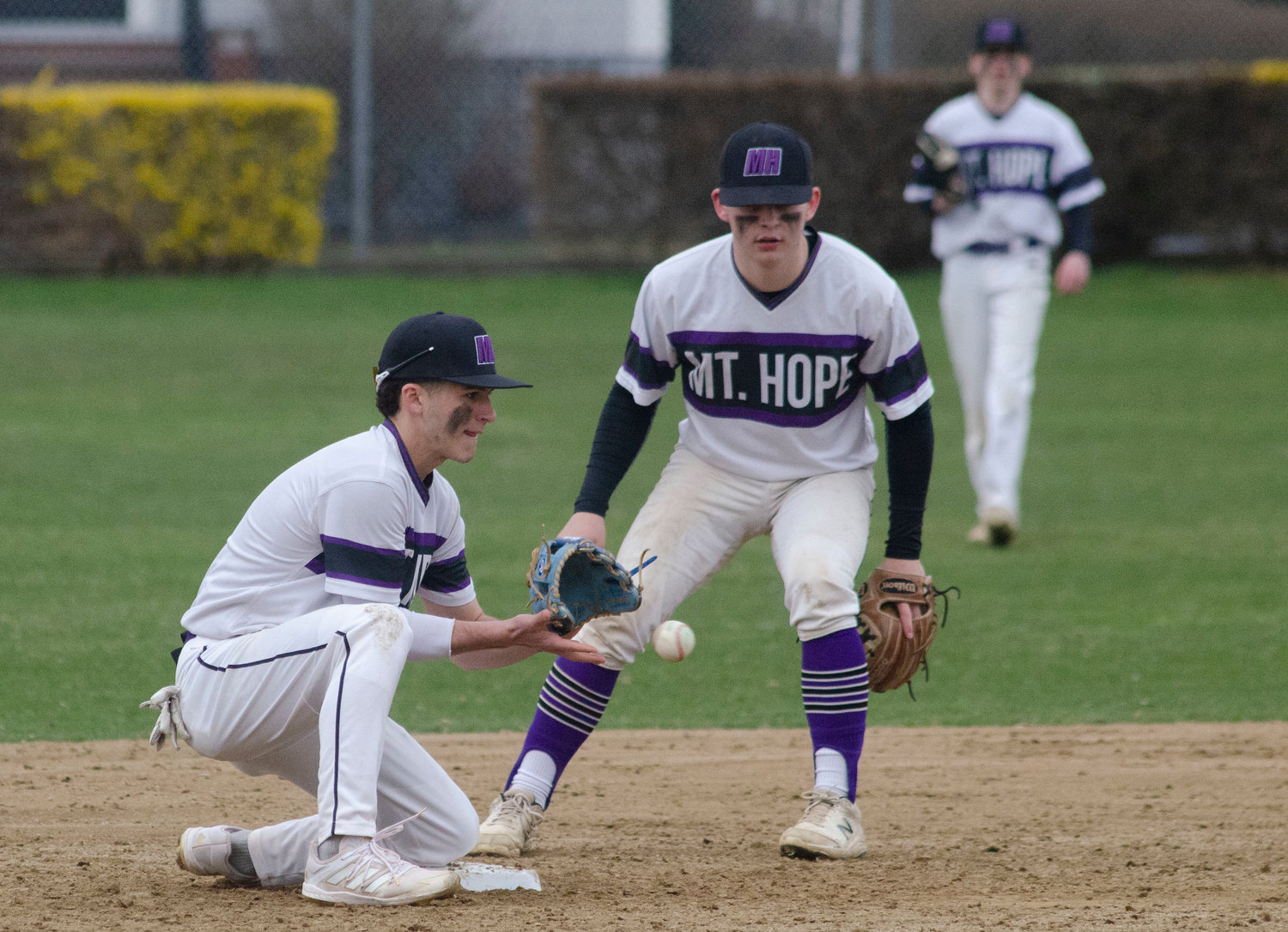 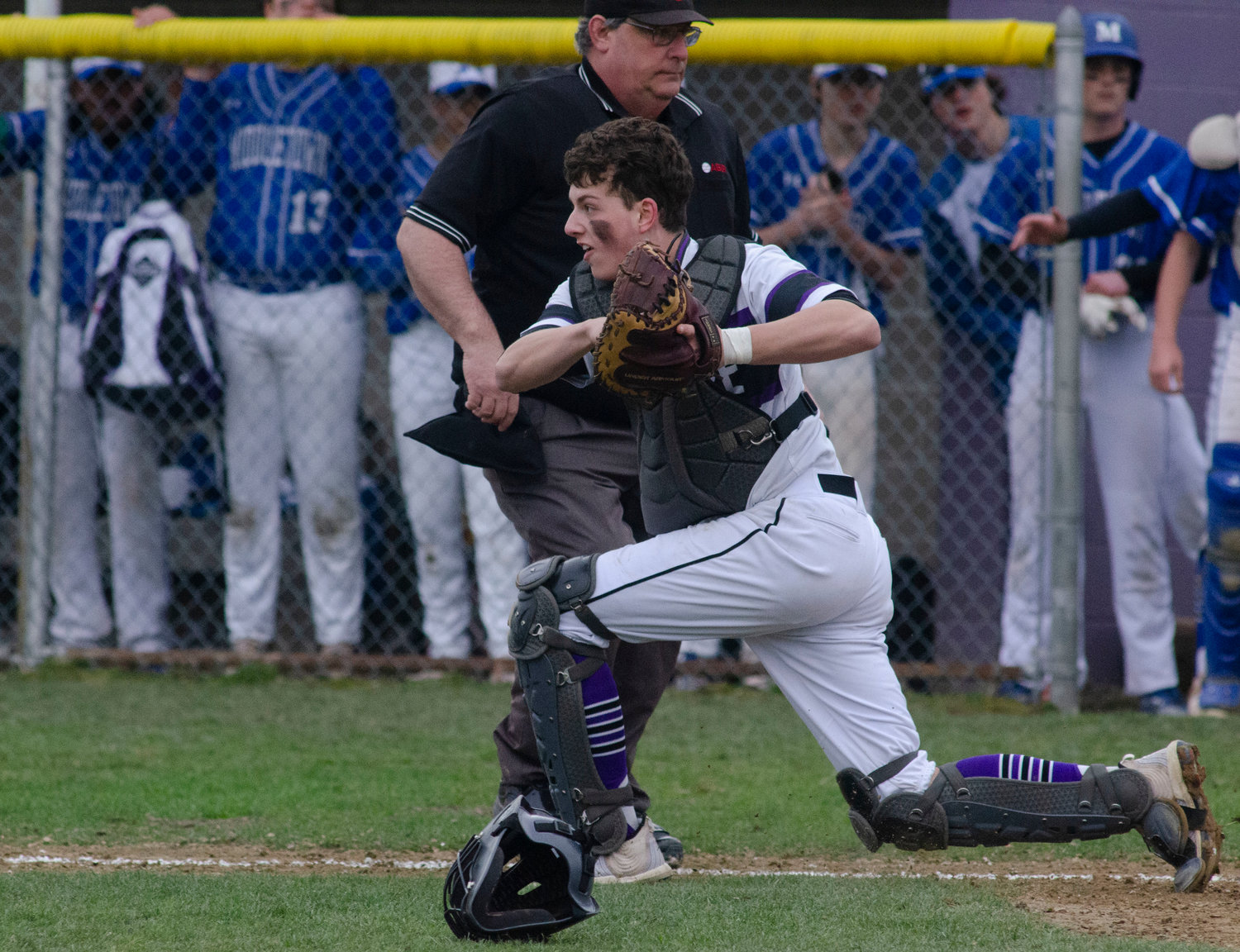 Catcher Matt Gale fields a throw to home plate and looks back a runner at first base. Gale drove in 5 runs in the series with Middletown including the game winner on Saturday.
Photos by Richard W. Dionne, Jr. 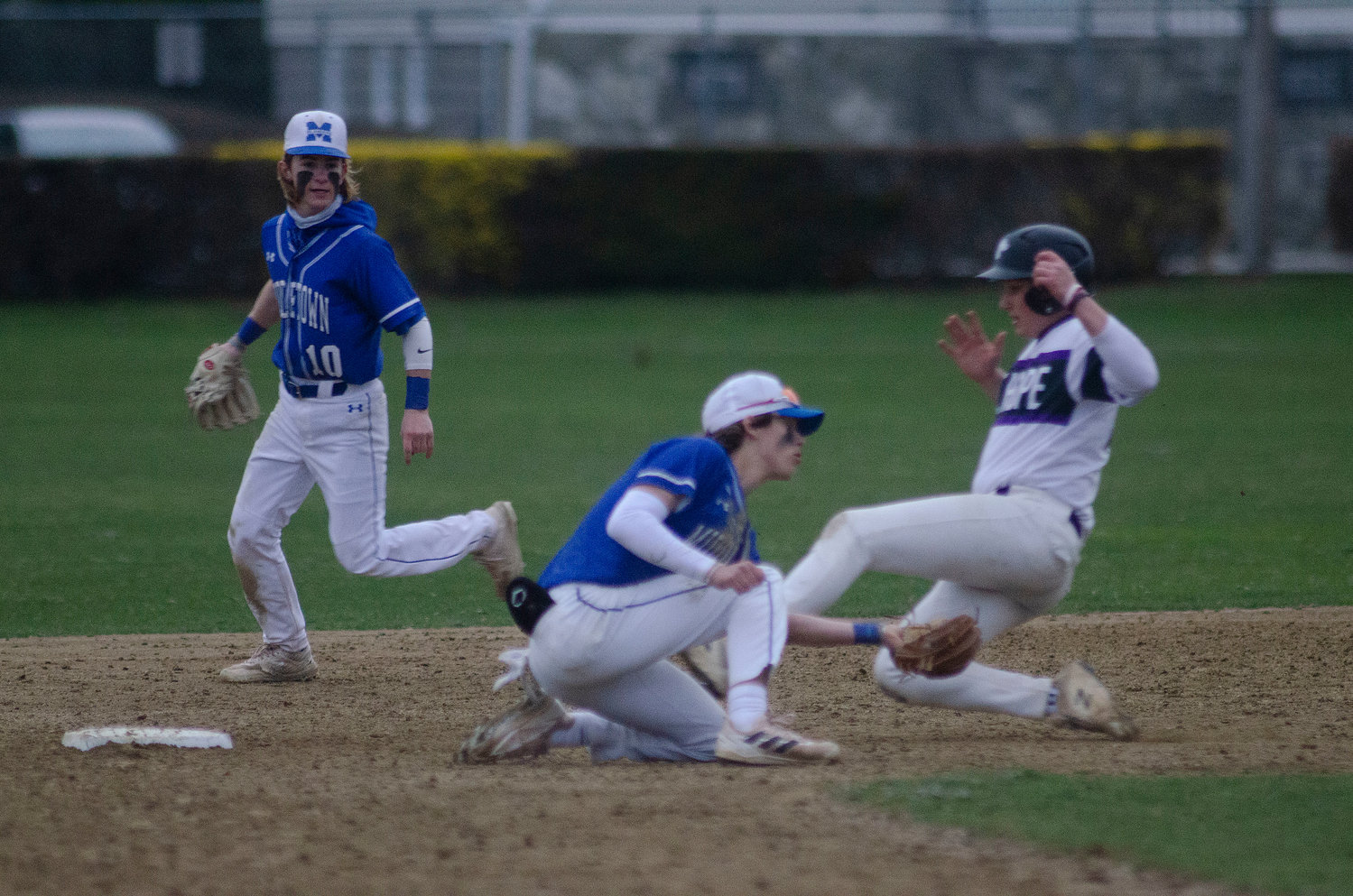 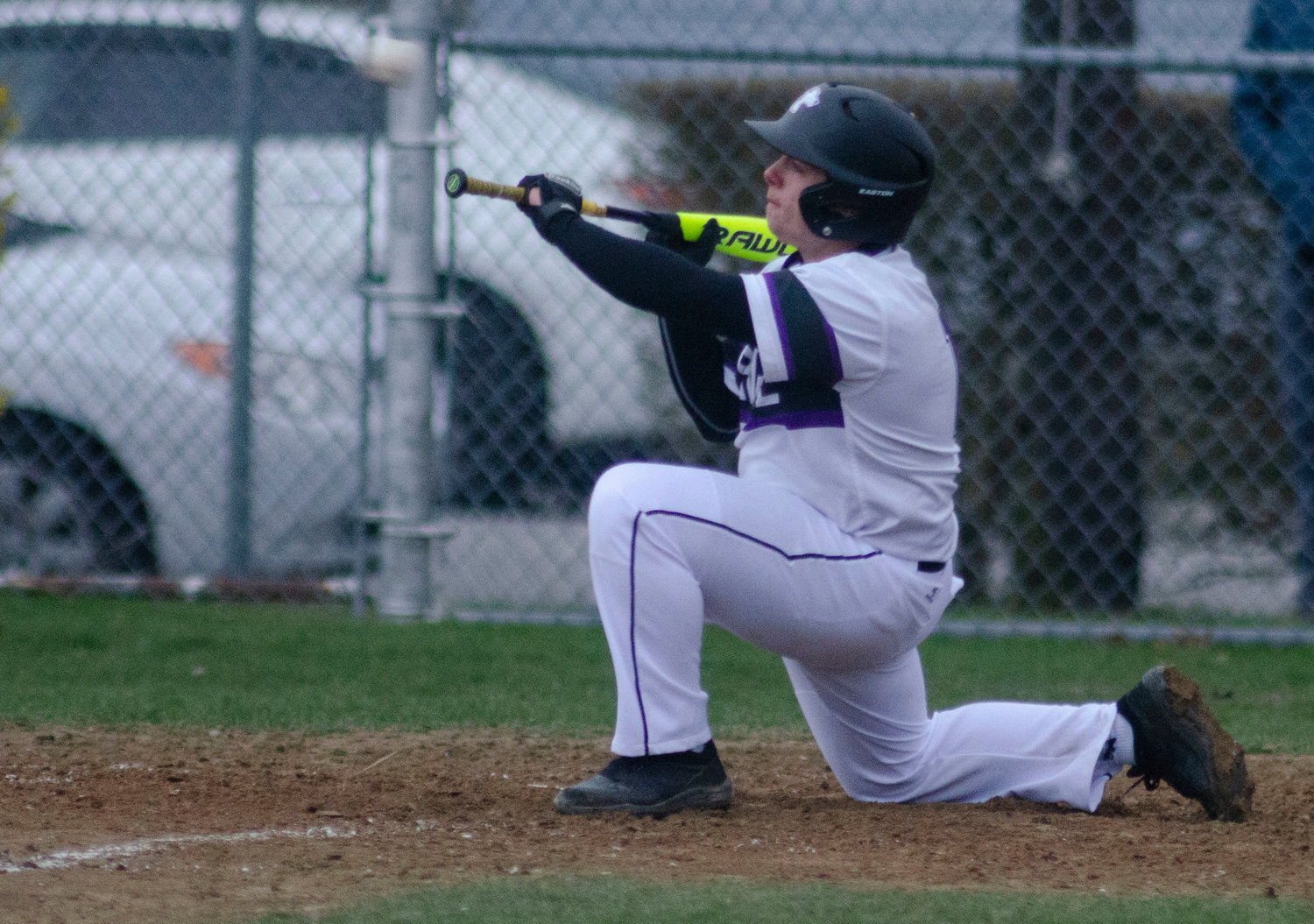 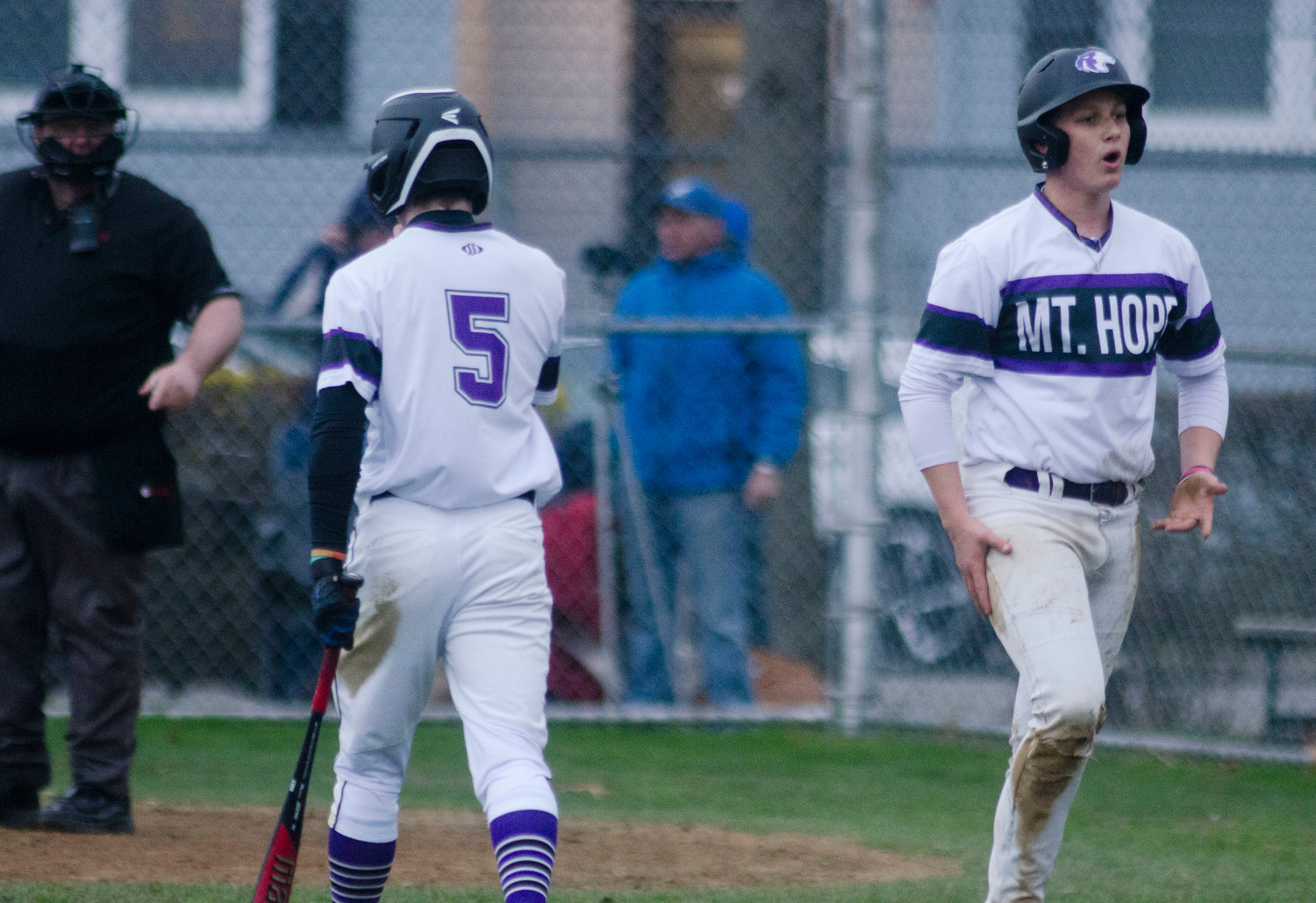 “It showed some grind and some grit from our guys to scratch three runs together to force extra innings. It’s a promising trait to see from the team early in the season.””
Head coach Mike Mazzarella after the team swept Middletown
Photos and story by Richard W. Dionne, Jr.

The Mt. Hope baseball team came back to beat Moses Brown 4-3 to win their third straight game to kick off their first ever Division I campaign with a 3-0 record. The Huskies 9 swept Middletown in a home and home series last week.

“I’m very pleased with how the team has battled to start the season," said Huskies head coach Mike Mazzarella. "We trailed in our last 2 games, the team fought back and found a way to win. Our schedule will provide a tough challenge weekly. It’s important that we as a team take it day by day. The boys know this and it shows in their work ethic everyday.”

Senior Jack Standish lofted a sacrifice fly to centerfield to score Caleb DeCastro in the top of the seventh inning to give the Huskies a 4-3 lead. DeCastro pinch running after an Aidan Ramaglia single to lead off the inning, stole third base when freshman Ethan Santerre executed a perfect show bunt. AJ Jones, the team’s junior ace, entered the game in relief in the bottom of the inning and shut down Moses Brown, striking out Tom Speltz to end the game and collect his first save.

The Quakers scored three runs in the first inning on Huskies starter Brad Denson. The junior right hander settled down after the first and pitched two scoreless innings striking out four, before giving way to senior Dayton Van Amberg in the fourth inning. The senior shut down down Moses Brown striking out four in three innings of work for his first win of the season.

The Huskies mustered nine hits against the Quakers. Mt, Hope scored a run in the first inning and another in the second before tying the game 3-3 in the fifth. Camelo reached via an era to lead off the first inning and scored on a Moses Brown error. Jones singled to lead off the second inning. He moved to third on a wild pitch and a passed ball and scored on Denson’s double to right field. Freshman Ethan Santerre (3 for 4, 1 run scored) batting in the second spot, singled to lead off the fifth inning. The outfielder moved to second on an error and headed to third base on a passed ball. Moses Brown catcher collected the passed ball and threw it over the third baseman’s head into the outfield. Santerre scored easily to tie the game 3-3.

The Huskies blanked the Waves at Gaudet Field last Tuesday and edged Middletown 4-3 in an extra inning game at Guiteras Field on Thursday and Saturday.

“Out pitchers did a good job,” said Huskies head coach Mike Mazzarella. “They pitched well, threw strikes and gave us the opportunity to win the games.”

Junior pitcher AJ Jones was stellar in game one, striking out 13 Waves in six shutout innings of work.

“AJ pitched a great game,” said Coach Mazzarella. “The sky is the limit with a pitcher like that.”

Jones the Huskies ace, struck out the side in the second and third innings. He held Middletown hitless until the Noah Leys singled in the sixth inning. The right hander struck out Kenny Firlings to end the sixth.

Offensively, the Huskies mustered four runs on five hits against Waves’ starter Cullen Knowles. Clean up hitter Matt Gale smashed a double to left field to drive in Ethan Santerre and Jack Standish in the fifth inning to give the Huskies a 2-0 lead.  A double by Aidan Ramaglia in the sixth inning scored Brad Denson to make it 3-0. Jones (2 for 3) helped his cause by lofting a sacrifice fly to centerfield to score Standish in the top of the seventh to give the Huskies a 4-0 lead. Senior Dayton VanAmberg pitched a 1-2-3 seventh to close out the game.

“It was a really important win for us to start our first ever Division I campaign,” Coach Mazzarella said.

Junior pitcher Brad Denson struck out five and held the Waves to one hit, in four shutout innings to start game two. VanAmberg pitched a clean fifth, but was roughed up for three runs in the sixth to give Middletown a 3-0 lead.

Mt. Hope struck right back for two runs in the bottom of the inning. Shortstop Parker Camelo walk with one out. Freshman Ethan Santerre belted a hit giving the Huskies runners at first and second. Standish grounded out to first base, leaving the Huskies with runners on second and third. Clean up hitter Matt Gale stepped to the plate and smashed a two out double to the left centerfield gap to score Camelo and Santerre to cut the lead to 3-2.

Standish laced a single up the middle to score Aidan Ramaglia to tie the game 3-3 in the seventh inning.

“Jack’s our guy,” Coach Mazzarella said of Standish. “When the bat is in his hands, I feel pretty comfortable. He came up big when we needed it.”

Middletown pitcher Ken Firlings caught Gale looking for strike three with the bases loaded to retire the side.

The umpires called the game due to darkness and the two teams met to finish the game on Saturday.

Jones pitched a clean eighth inning for the Huskies and received the win when Gale smashed a bases loaded, walk-off single in the bottom of the inning.

“It showed some grind and some grit from our guys to scratch three runs together to force extra innings,” said Coach Mazzarella. “It’s a promising trait to see from the team early in the season.”

Junior pitchers AJ Jones and Brad Denson are Mt. Hope’s one and two starters. Senior Dayton VanAmberg will also start and pitch in relief. Parker Camelo, Jack Standish and Ethan Santerre will also see some time on the mound.

“Jones throws a fastball, curveball and changeup,” said Coach Mazzarella. “AJ does a good job of balancing them all out. We preach here at that if you want to have an arsenal pitch, you have to throw it at least 25 Percent of the time and he does. He throws all of his pitches for strikes with confidence. And I’m confident anytime that 13 is on the mound for us.”

Brad is another high end caliber player. He’ll be playing at the next level at some point. Brad mixes three pitches as well and does a good job. For Brad, it’s about getting back to being healthy. We lost him all last season with a torn ACL.”

Catcher and first base

Junior Jack Standish will catch Brad Denson and junior Matt Gale will catch all other pitchers, said Coach Mazzarella. The two catchers will alternate at first base when not catching.

“It makes the most sense to switch in Matt at first base when Brad pitches,” said Coach Mazzarella. “They are both very solid behind the dish. It’s nice to have the luxury to mix and match with certain lineups.”

Jack will also play some second base. Junior Parker Camelo will be the team’s everyday shortstop. “Parker is fantastic. He’s very confident in everything that he does,” said Coach Mazzarella. “It’s really nice to have a very strong shortstop to play everyday and button up our infield for us.”

VanAmberg will play third base when he isn’t pitching. Standish and Jones and also spell at third base.

Senior Aidan Ramaglia will play centerfield for the Huskies.

“It’s nice to have his senior leadership out there and Aidan is really good at what he does,” said coach Mazzarella. “And he shows up and works hard.”

“We are relatively young,” said Coach Mazzarella. “We do have three or four seniors who do a lot for us. But for the most part, it’s nice to have a young core to come back after our first battle tested season in Division I.”

The Huskies have joined Portsmouth, Barrington and East Providence in Division I and will play home and home series with all of those teams this season.

“It’s important for us to have those cross town rivalries,” Coach Mazzarella said. “It’s good for baseball, it’s good for the fans. It fills our stadium here, especially when we play Barrington. The place is always packed.”