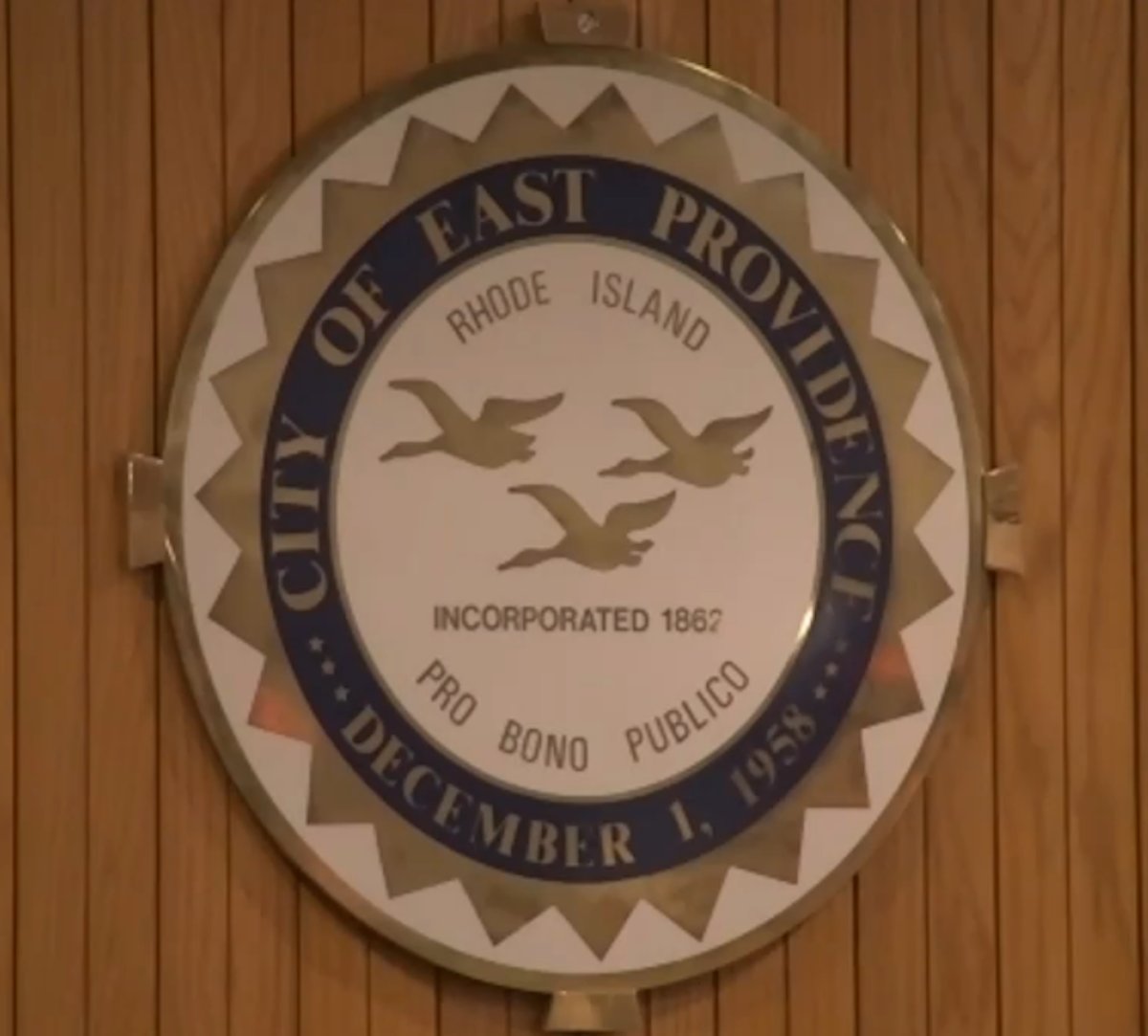 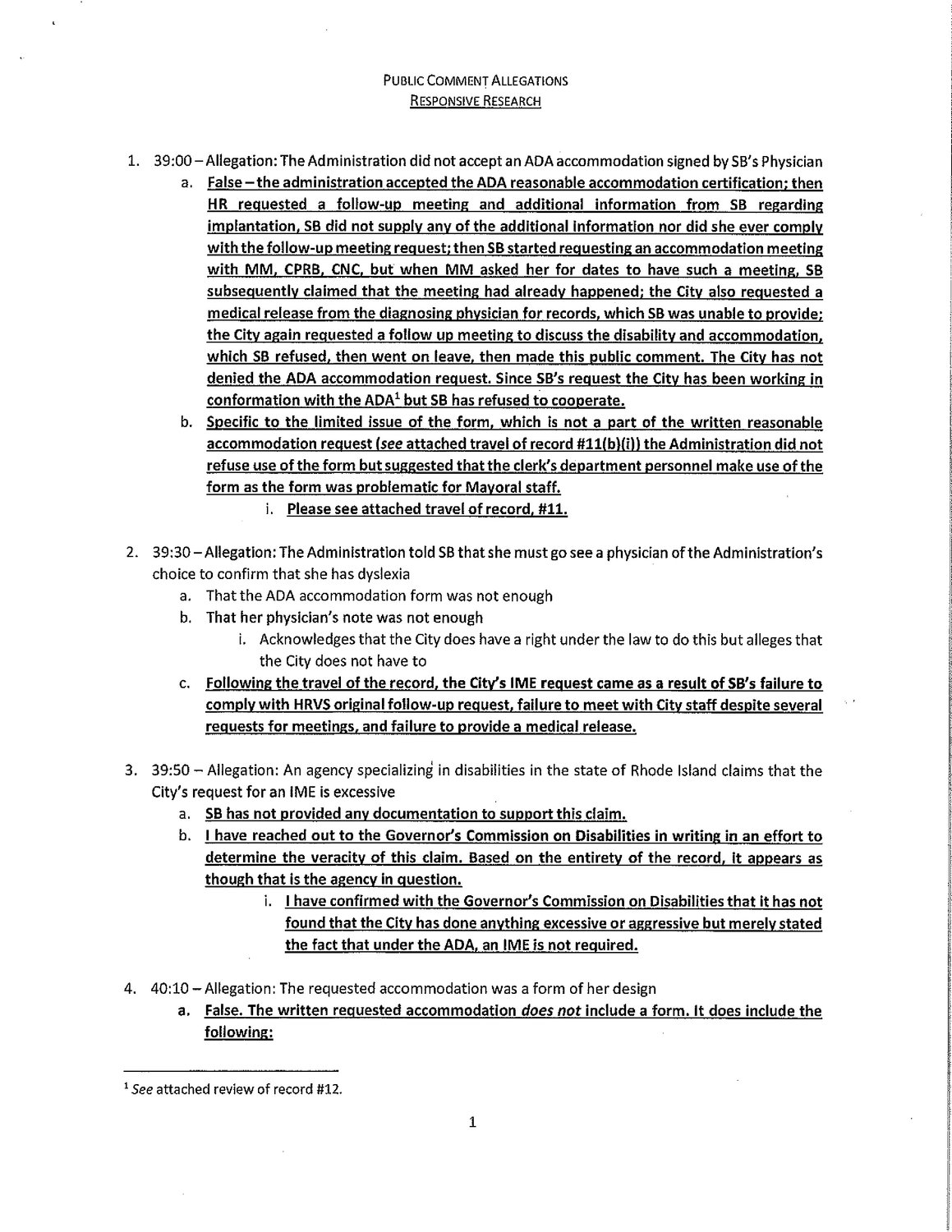 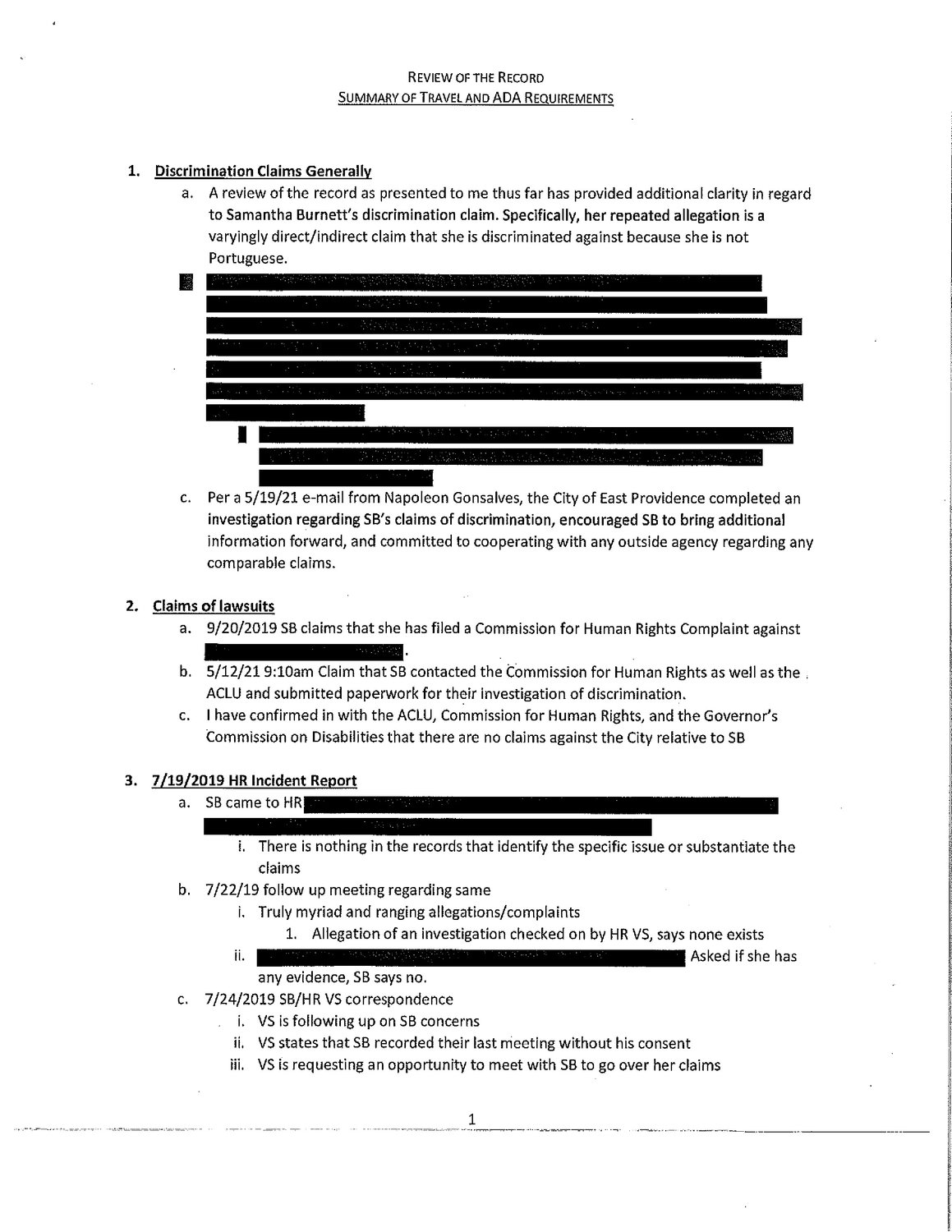 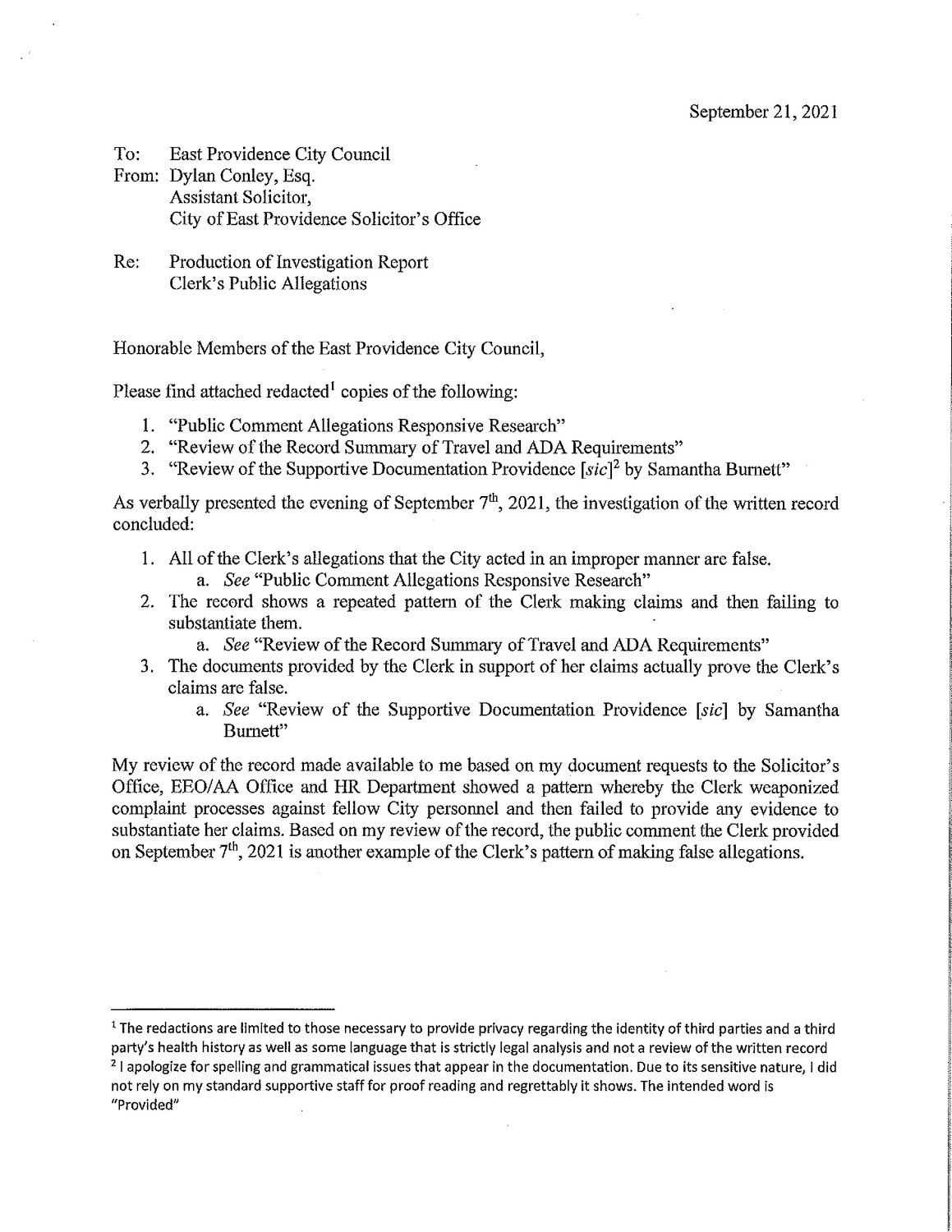 EAST PROVIDENCE — An investigation conducted by Assistant City Solicitor Dylan Conley into a host of accusations made against the administration of Mayor Bob DaSilva by City Clerk Samantha Burnett appears to have debunked many, if not all, of those claims.

(Some aspects of this story were updated, corrected, September 28, 1 p.m.)

The inquiry, commissioned by the City Council in response to over two dozen charges Burnett made during the public comment section of the body’s August 17, found the City Clerk, who is away from her duties on a leave of absence, had a pattern of making allegations, then failing to follow up with any specific evidence.

Conley’s summary also concluded some of Burnett’s charges were either specious or outright “false.” The results of the investigation were presented to the council in executive session during its Tuesday, Sept. 21, meeting.

Later the same evening, the council voted by a narrow 3-2 margin to make most of the findings public. Councilors Bob Britto, Nate Cahoon and Bob Rodericks were in the affirmative. Councilors Ricardo Mourato and Anna Sousa cast against.

The council took no other action on the matter.

Burnett made her accusations known to the general audience late in August during a lengthy soliloquy, which was allowed to take place by Britto, the council president, without any response from the rest of the body or representatives of the administration.

Burnett's leave of absence began on August 16, the day prior to her remarks. Assistant city clerk Leah Stoddard has been performing the duties of the office in Burnett's stead.

Conley’s inquiry went point-by-point over 27 accusations made by Burnett in open session of the August 17 meeting.  Britto, as body president, allowed her to speak that evening, but did not give others a chance to respond, which is per meeting guidelines and is customary during public comment.

The crux of Burnett’s allegations against the administration, some directly made against Director of Administration Napoleon Gonsalves and Affirmative Action/EEO (Equal Employment Opportunity) Officer during her August 17 public remarks, were its failure to accommodate her disability (dyslexia) and its discrimination against her for being a woman of color.

Of the latter, Conley noted, “While the Clerk has consistently stated in public that she has been discriminated against because she is a person of color, the record indicates that her actual, consistent and predominant discrimination complaint is that she is treated unfairly because she is not Portuguese.”

Burnett also claimed she had submitted complaints about her situation with a number of state oversight bodies and advocacy groups.

Conley’s research found those claims, as well, to be misleading. He wrote in his report, “I have confirmed in with the ACLU, Commission for Human Rights, and the Governor’s Commission on Disabilities that there are no claims against the City relative to SB (Samantha Burnett).”

Near the end of his presentation to the council at last week’s meeting, Conley was asked by some councilors his opinion on why it was important to have the results of his investigation made public. In response, he said it could potentially prevent litigation against the city if lawyers had access to his findings.

Of note as well, prior to Conley’s summary, Gonsalves, who attempted but was not allowed a response to Burnett’s comments at the August 17 meeting, stated to the council during the by-weekly Mayors Communications section of last week’s forum “the administration categorically denies all of the allegations” made by the clerk.

Editor's note: An earlier version of this story included a sidebar box with Samantha Burnett's announcement, submitted on Thursday afternoon, Sept. 23, of her planned candidacy for City Council from Ward 1 at the 2022 election. Ms. Burnett sent a follow-up email late Friday afternoon, Sept. 24, asking that her announcement be retracted until a later date.