PORTSMOUTH — It was a culinary challenge at Atria Aquidneck Place last … 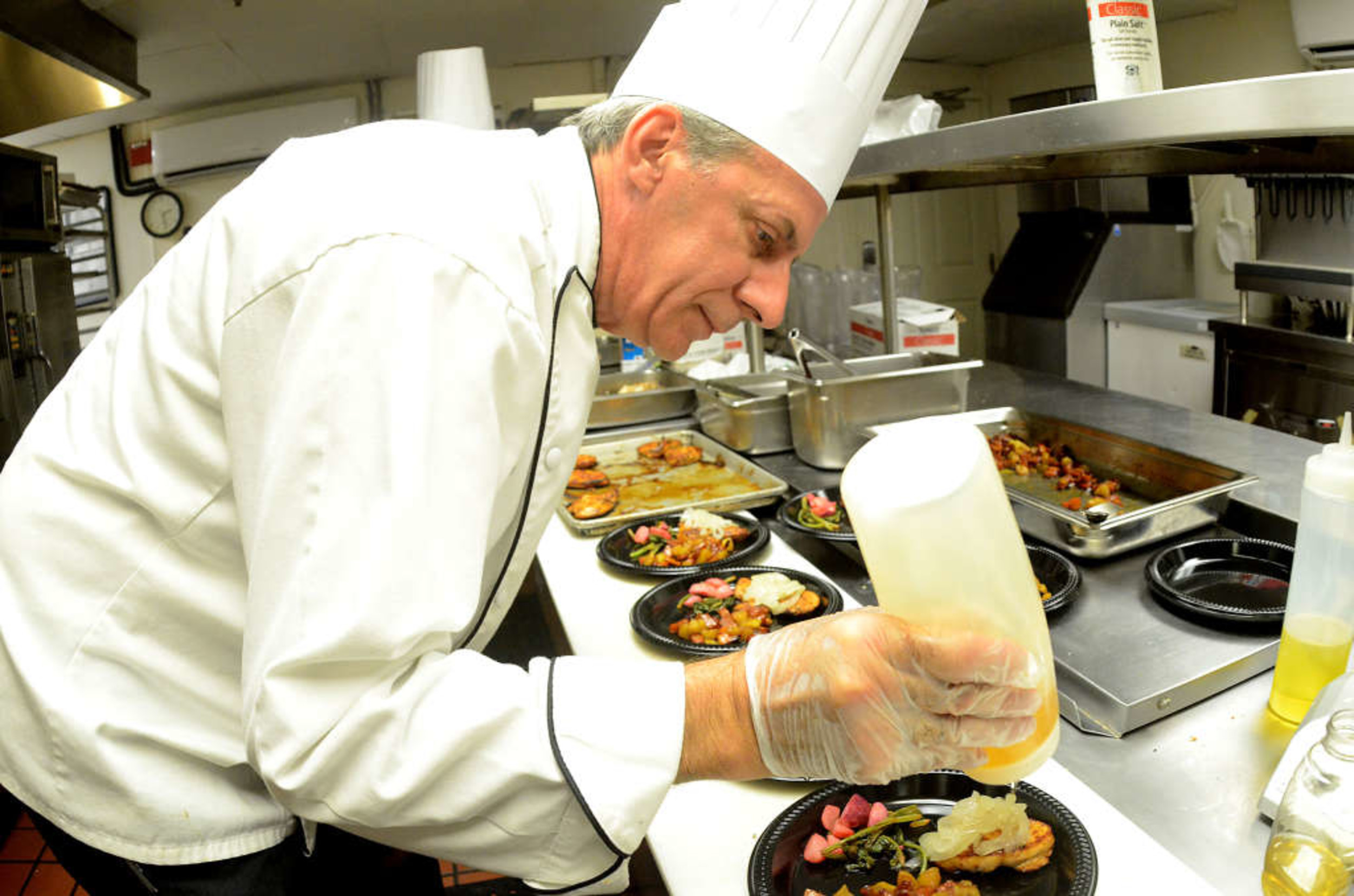 Mr. Silva adds some honey to the top of his dish. The honey came from the hives of his cook-off opponent, Firefighter Andrew Jones. Photo by Richard W. Dionne Jr.
Posted Thursday, July 30, 2015 12:57 pm
Jim McGaw

PORTSMOUTH — It was a culinary challenge at Atria Aquidneck Place last week.

In this corner we have Gordon Silvia, director of culinary services at Atria.

In the other corner is Andrew Jones, Portsmouth firefighter and amateur beekeeper.

“It’s my homemade barbecue sauce mixed with teriyaki sauce,” said Andrew, whose sauce also uses fresh honey from the four beehives he maintains. “I pulled about 10 gallons’ worth on Saturday.”

For the side dish, he roasted sweet potatoes with apples and onions and served them up with radish greens from his garden.

“That’s his interpretation,” Gordon interjected. “Let’s see what I come up with. I have never made this before. He’s basically adding radishes to his sweet potatoes, and I’m not. As for the chicken, I marinaded mine a little bit more than he did.”

Being the head chef at an assisted living facility, Mr. Gordon also prepared his dish more with residents in mind — taking the skin off the potatoes and cutting everything up into smaller pieces.

The event celebrated National Culinary Arts Month, in which Atria senior living communities across the country challenged firefighters and police officers to cook-offs.

“It’s just a way to connect with the community, invite them down here and have a little cook-off,” said Gordon, adding that he often gets the residents involved by trying out their own recipes.

“We really like to do a lot of stuff with the community,” added  Jacqui Emrich, engaged life director at Atria, who said an earlier event — a pie bake-off — was a big hit. “The residents just loved it because they’d come down to five different pies.”

Andrew’s been cooking seriously for about four or five years and regularly prepares meals at the fire station. “When we had storms we cooked for the cops — probably about 25 people,” he said.

But last week he had to navigate around an unfamiliar kitchen and scrambled to get his dish done in time for the 2:30 p.m. deadline.

“I’m a little more behind than I wanted to be. But that happens,” he said.

When they were done, the food was brought to a dining area for a blind taste test by three judges: Police Chief Thomas Lee; John Vitkevich of the Portsmouth Business Association, which hosts breakfasts at Atria once a month; and Cindy Morse, chef and owner of Cindy’s Country Cafe on West Main Road. Several residents of Atria were also treated to the dishes.

After it was pointed out that Gordon’s brother, Gary, is the police chief in Newport, Andrew joked, “I’m feeling outnumbered with this cop thing.”

So whose dish was tops? The judges called it a draw.

While all three of them preferred Andrew’s chicken, they gave Gordon the edge on the vegetables.

“My compliments to both chefs,” said Mr. Vitkevich, before asking, “Is there any more?”

He also asked Andrew what he put in his sauce — which he immediately recognized as being homemade — to give it “that bite.”

“I make it with a little bit of chili powder, Worcestershire sauce. There’s a little bit of teriyaki sauce in there, then I add some mustard, ketchup as the base, and it gets some of my honey in there with black pepper and oregano,” said Andrew, who promised to share the recipe with Atria.

“My mother always told me to become a fireman,” said Chief Lee. “Now I know why.”

Scroll through more photos from the cook-off below.

What to expect with Barrington's Memorial Day events