EAST PROVIDENCE — If the enthusiasm for the endeavor of city native and alum Tshombe “Bay” Lambert, the new head coach for the East Providence High School girls’ basketball program, is … 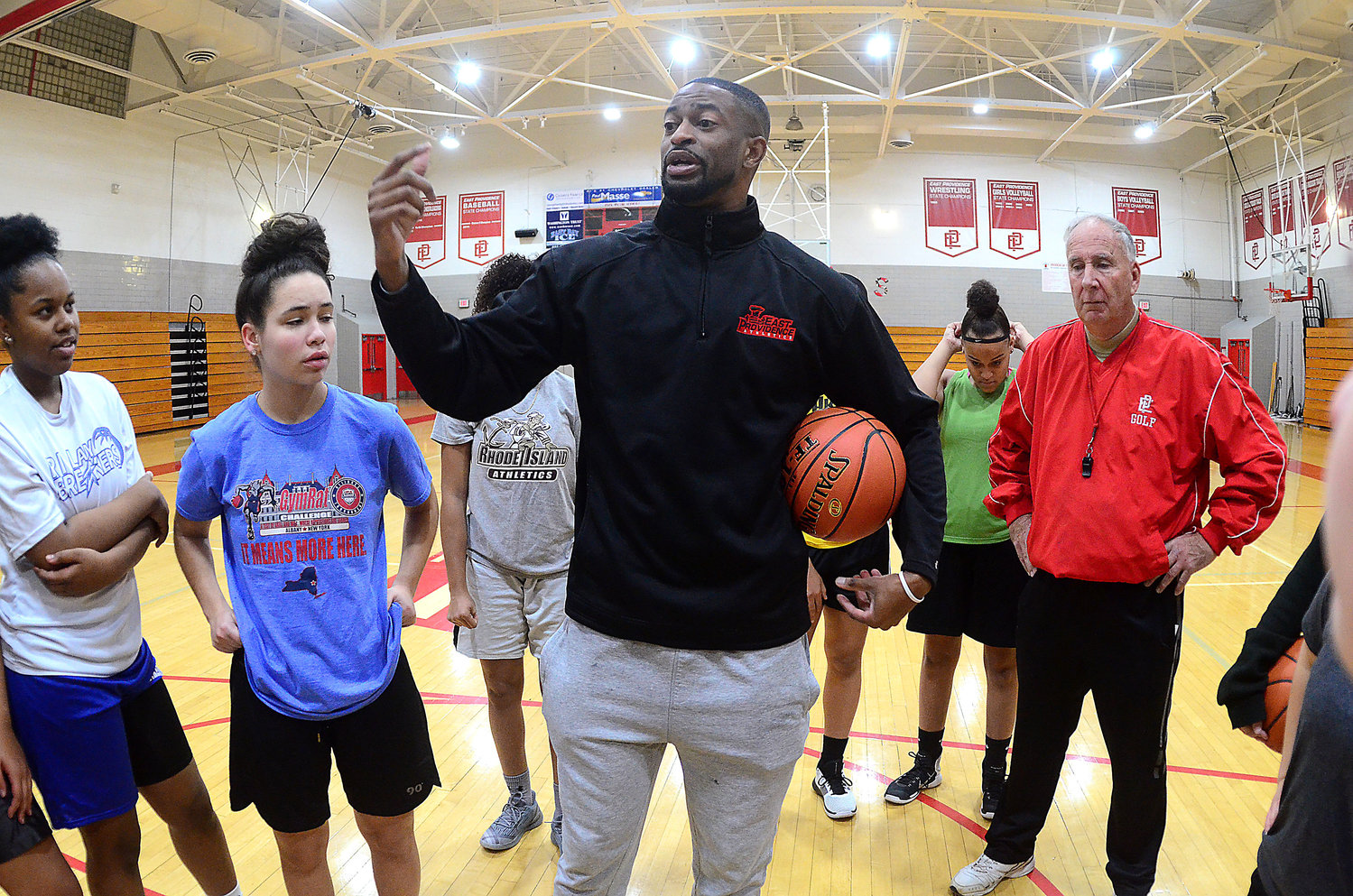 City native and alum Tshombe “Bay” Lambert talks to members of the team before a practice last week when he took over as the new head coach for the East Providence High School girls’ basketball program.
Photos by Rich Dionne 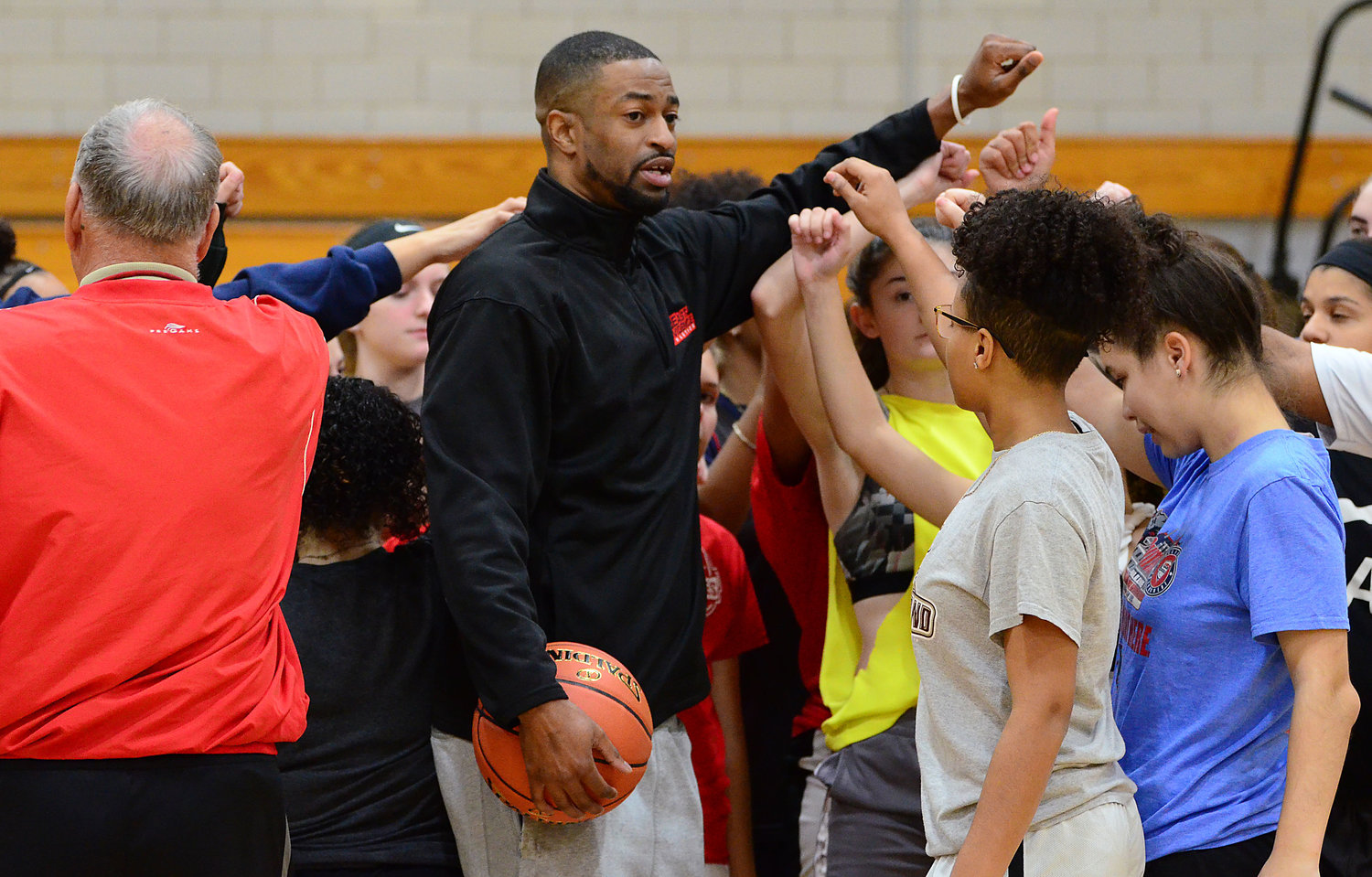 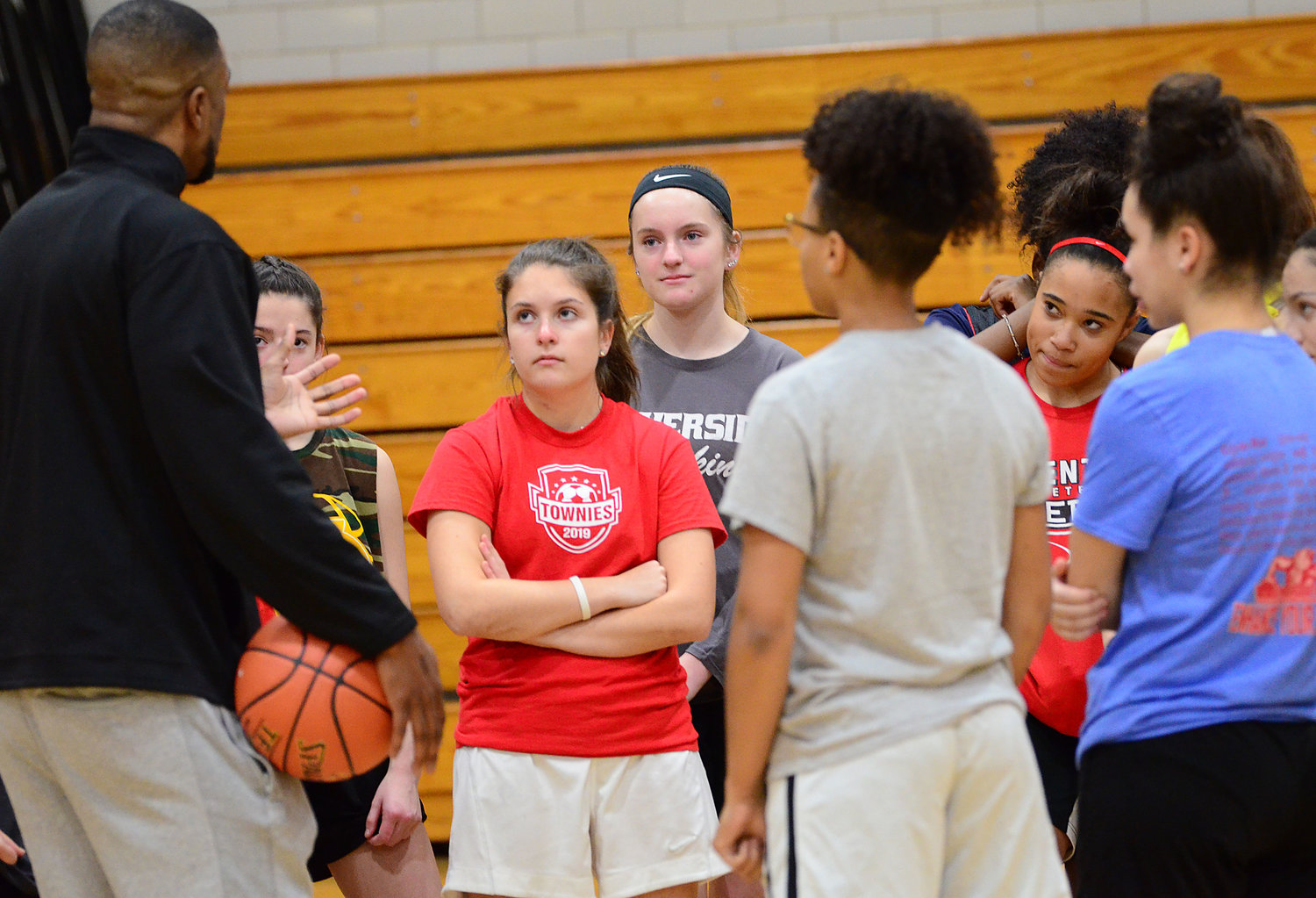 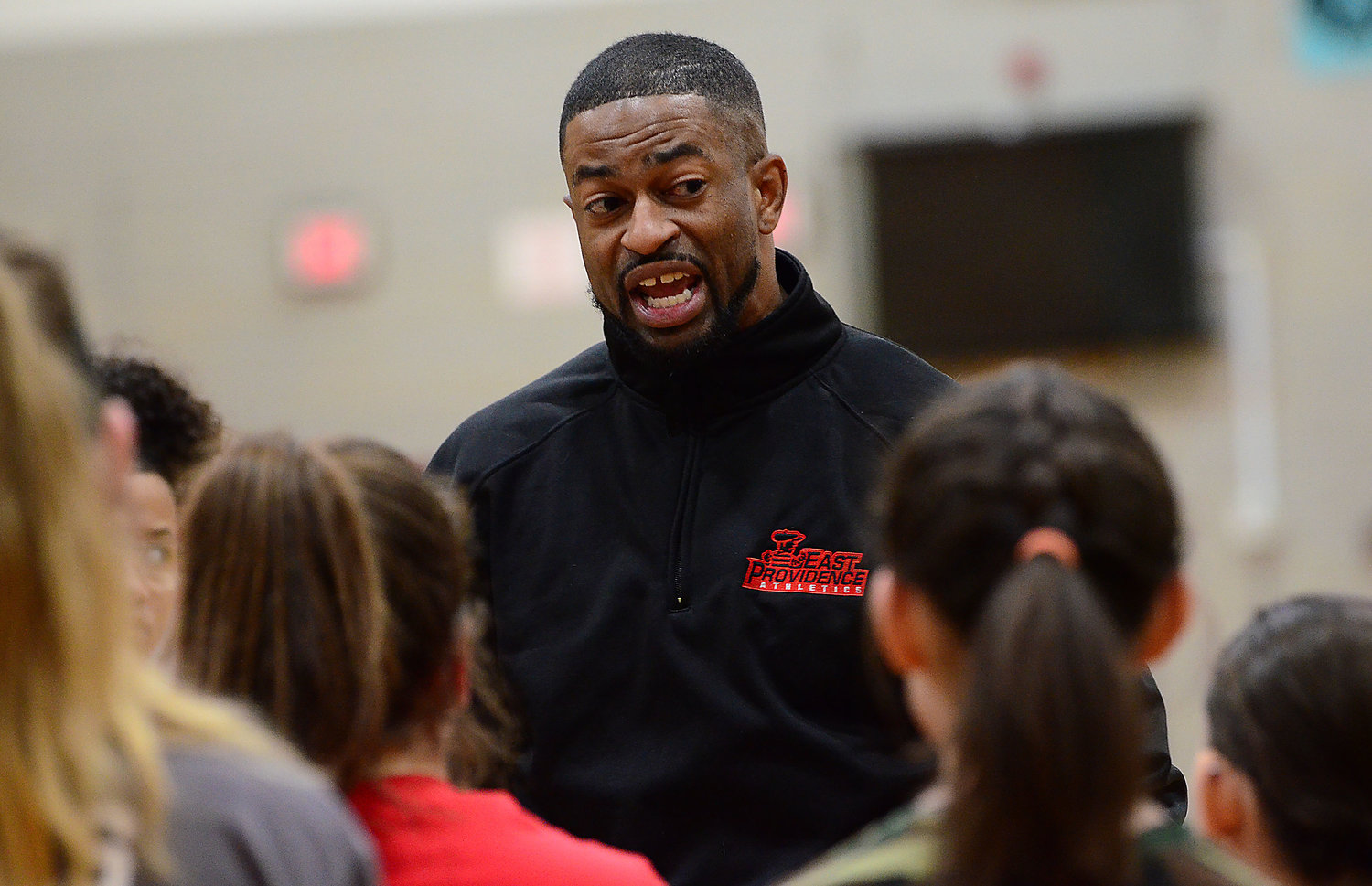 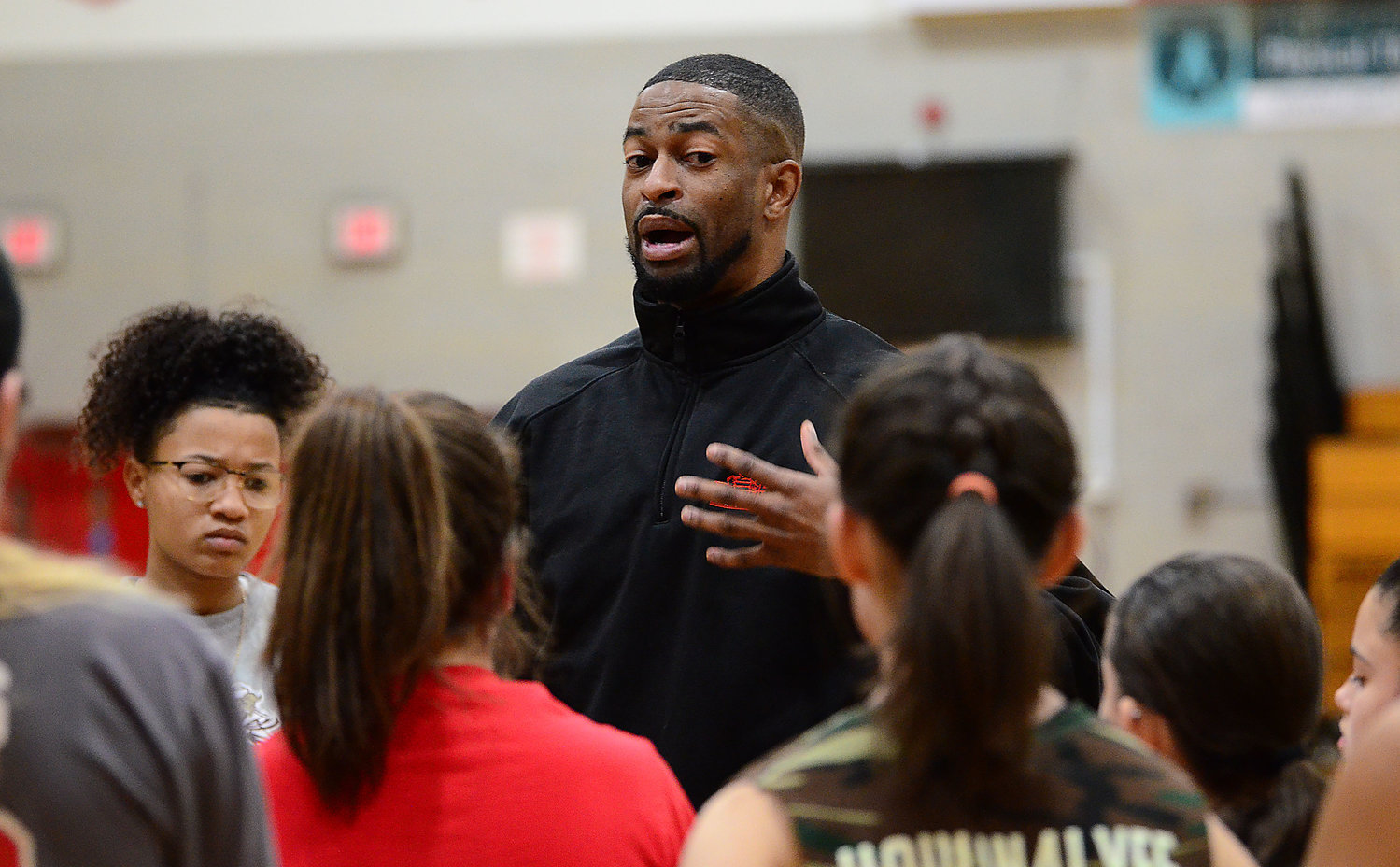 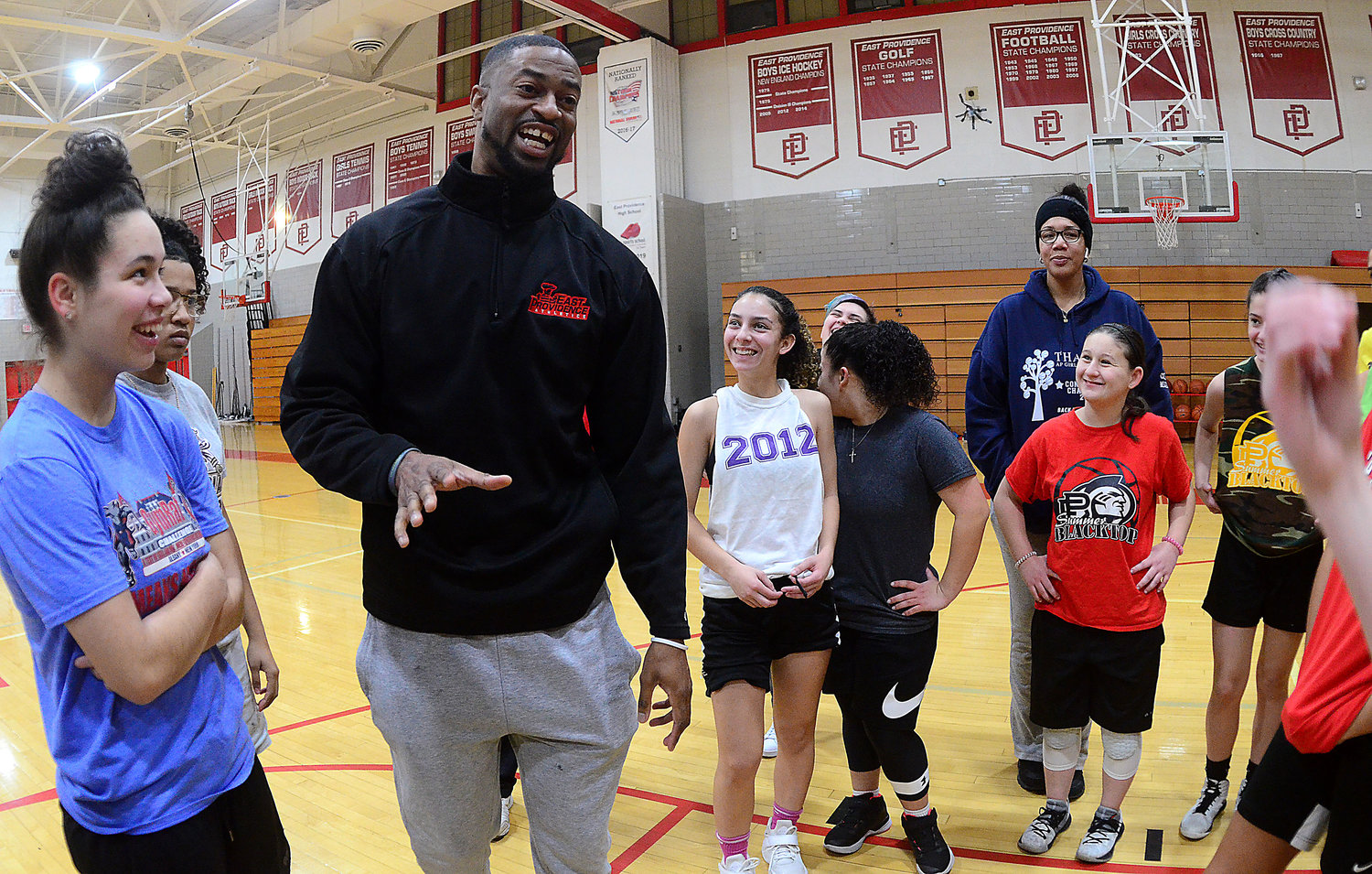 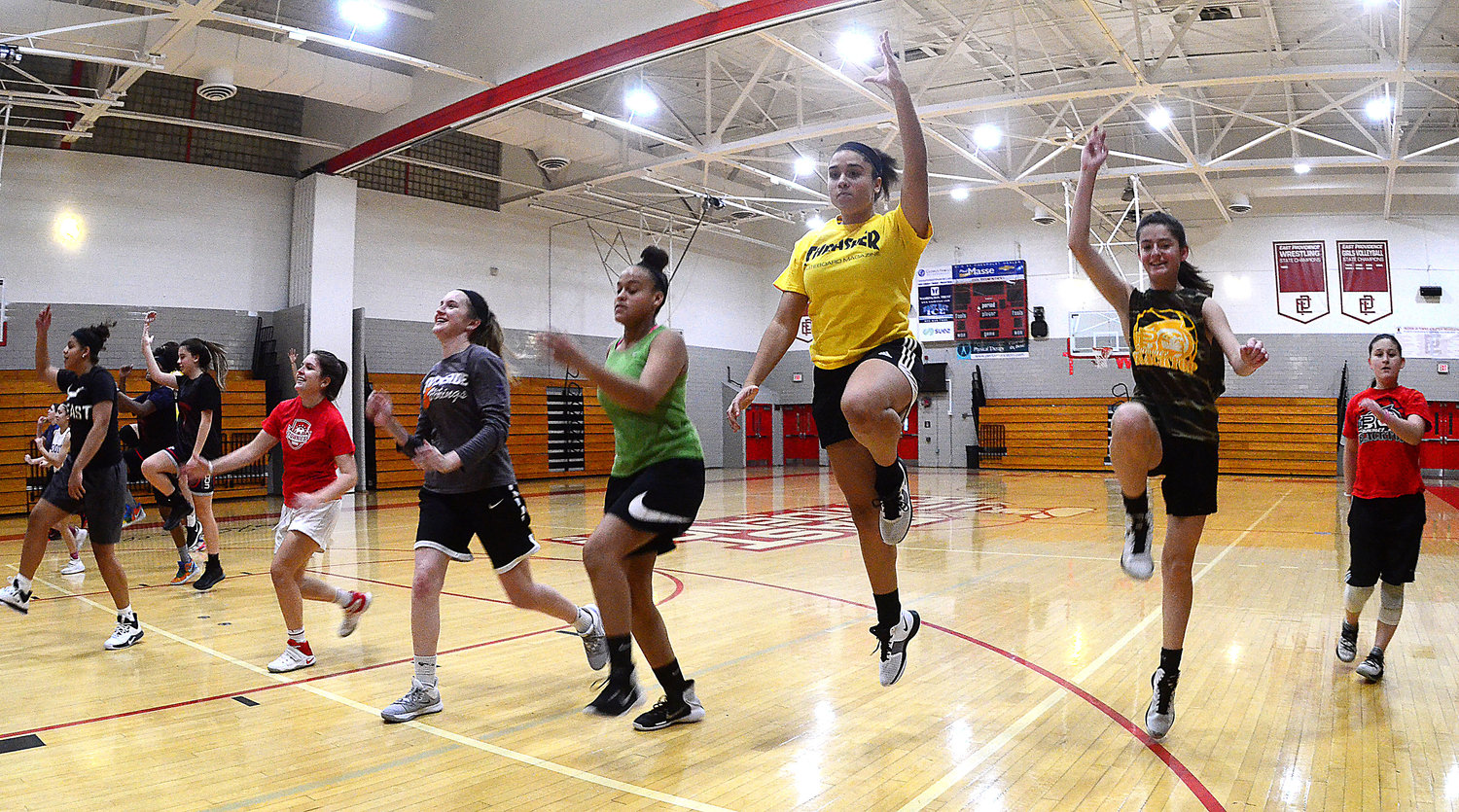 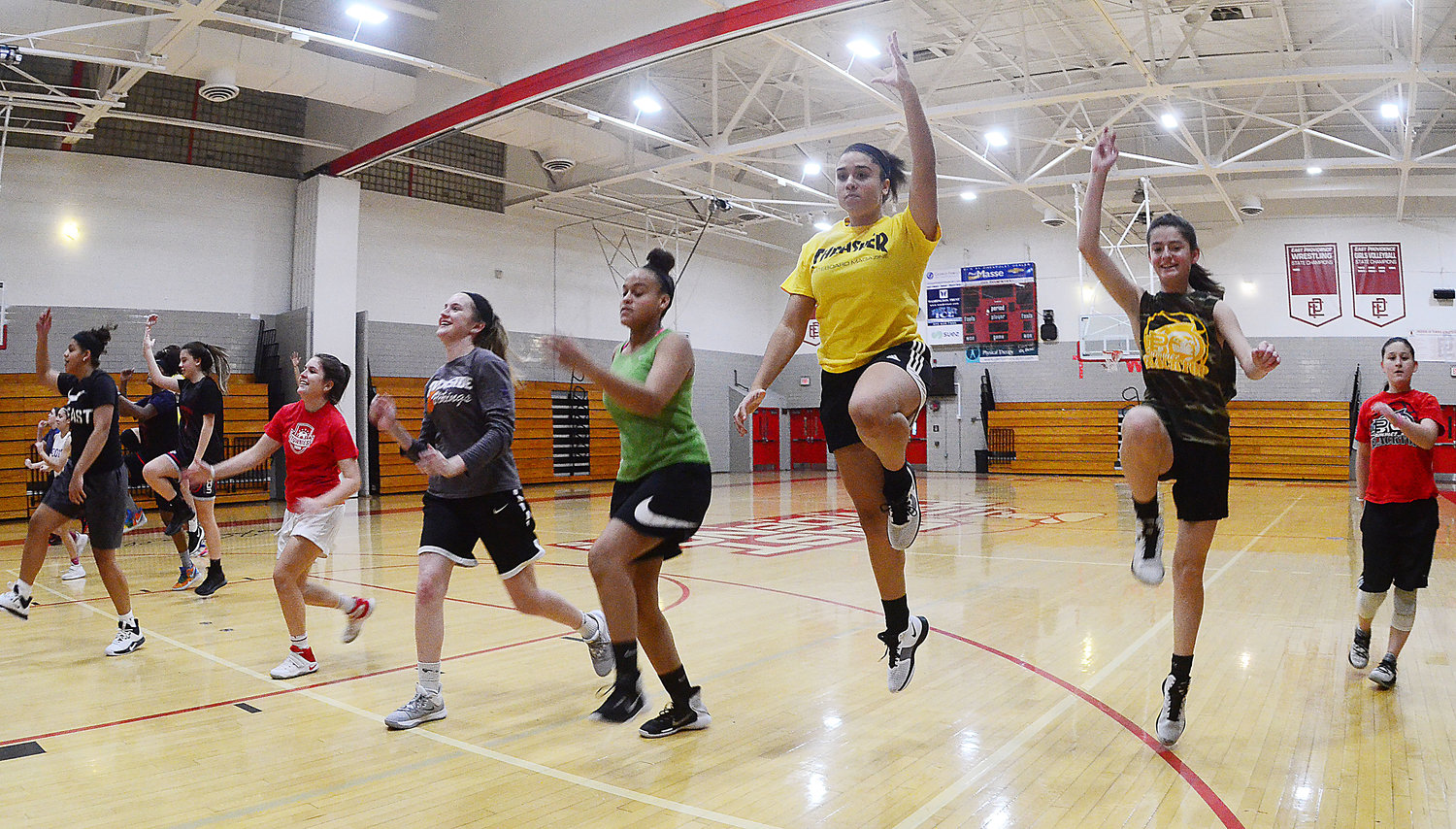 EAST PROVIDENCE — If the enthusiasm for the endeavor of city native and alum Tshombe “Bay” Lambert, the new head coach for the East Providence High School girls’ basketball program, is infectious, then the Townies should be in good stead this winter and for seasons to follow.

The 2002 EPHS grad returns to his alma mater to replace Russ Ferri, who coached the Townies for some 18 months before stepping away in the midst of what was a trying 0-18 season a year ago for locals playing in the state’s top tier, Division I. Assistant athletic director Rob Traverse coached the team on an interim basis to the end of 2018-19.

Lambert was recommended for the position by district athletic director Gregg Amore in June of this year and he was formally approved by the School Committee to take over the role shortly thereafter.

Lambert, himself, could be described the same way. He was the starting quarterback for the EPHS football team as a senior and a three-year starting forward on the boys’ hoops team. After his final season in each, he was named All-State, first team in football and second team in basketball. He finished his playing career as a cornerback in college at Bryant University, from which he graduated in 2007.

The 35-year-old real estate broker, who currently resides in Warwick, has coached girls’ basketball at the youth level for several years. He previously guided the Rhode Island Basketball Association’s North Providence fifth grade travel team and the seventh grade AAU travel Rhode Island Lady Volts. Last winter, he was the head coach at Park View Middle School in Cranston, for whom like the Lady Volts, his daughter, Mya, plays.

Lambert’s tenure on the sideline begins this week when actual games are played. He will have three non-league outings to take stock of his team before the Townies play their D-I opener December 19 vs. Johnston.

“Basketball skill-wise, we have a long way to go, but we’ve already made a lot of progress. I met with the team a lot during the summer, so they know my expectations. Conditioning-wise, we weren’t there. Now they’re starting to see it and it’s starting to come together. We’re starting to see them beginning to gel, but you’ve got to crawl before you can start to walk.”

Lambert will be assisted by two others familiar to both some and plenty: Carissa Meekins, EPHS Class of 1998 who later played at Morgan State University, and Bill McEnery, the former long-time EPHS girls’ hoops head coach. Meekins, a 6-foot-2 center in her playing days, will double as the junior varsity coach. McEnery is a volunteer aide.

“Carissa is just like me. She’s a pitbull. I pretty much grew up with her,” Lambert said. “Obviously, I’m coaching girls, so she can relate them on another level than I can. And she also played here like I did, which is awesome. They can see it. They can actually see the vision. They know we actually both came from here. We both played college ball. We made it happen, so anything is possible.

“And also for the ‘bigs,’ she did that. She played at Morgan State, so for her to coach our ‘bigs’ on top of me is going to be something special.”

He continued, “Coach McEnery, obviously, he has the knowledge. He’s been doing it for years. When he speaks, everyone listens. When he speaks, I listen. I don’t know everything, so I kind of lean on him. His guidance and knowledge alone, I’m set.”

The Townies' debut under Lambert comes when they host Tiverton Thursday night, Dec. 12, as part of a girls’ and boys’ Injury Fund doubleheader beginning at 5:30. EPHS welcomes Cranston West Monday evening, Dec. 16, at 7 then travels to West Warwick the next night for a 6:45 start. Johnston comes to the city for the league opener Thursday, Dec. 19, at 7 p.m.