EAST PROVIDENCE — The exodus of some of the district’s most senior and respected employees continued to be announced in recent days, … 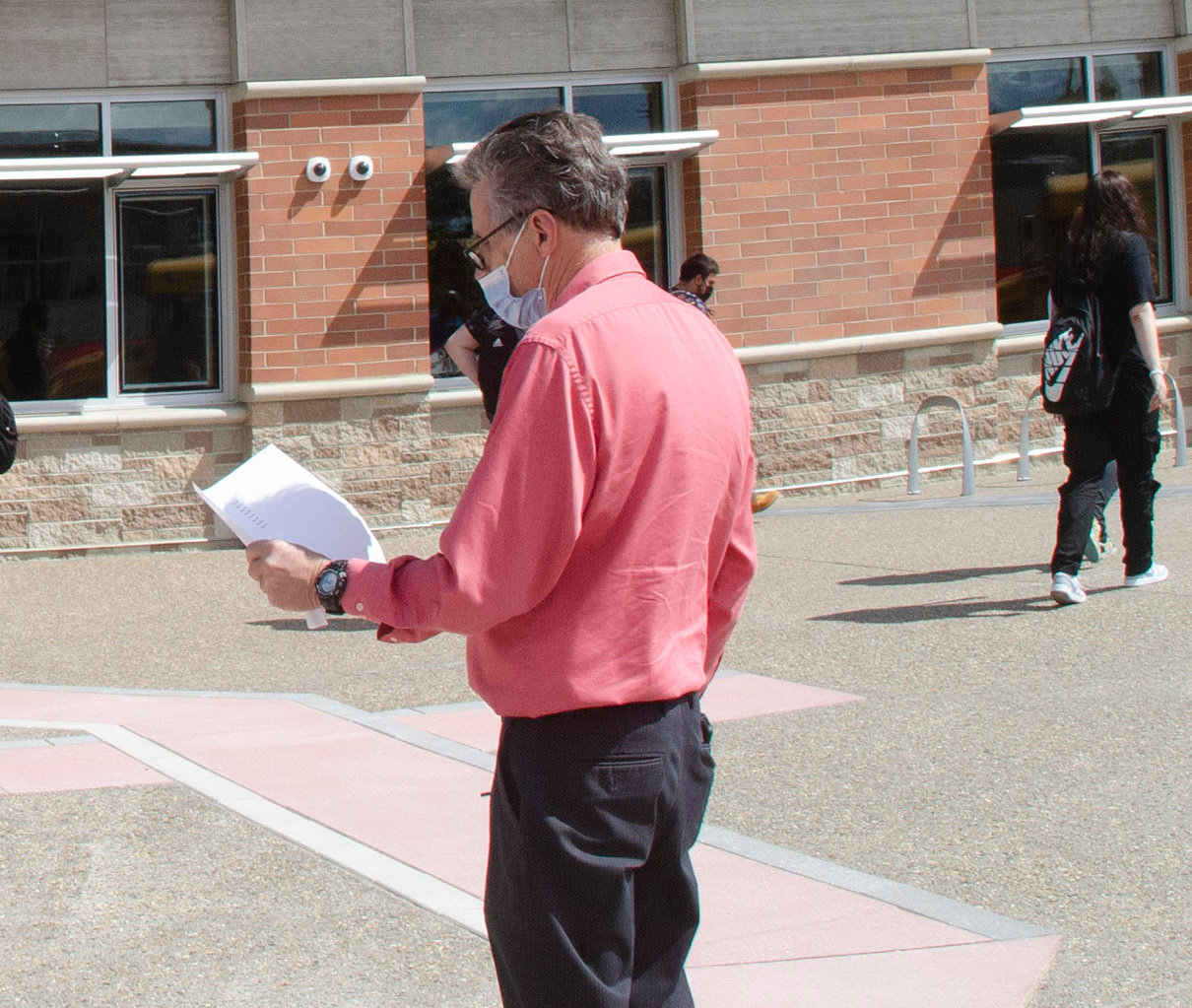 Assistant principal Bob Currier checks the bus list at the end of the first day of classes at the new EPHS late last summer. Currier is retiring at the conclusion of the 2021-22 term after 28 years in the district.
Photo by Richard W. Dionne Jr.
Posted Friday, May 13, 2022 1:53 pm
By Mike Rego

EAST PROVIDENCE — The exodus of some of the district’s most senior and respected employees continued to be announced in recent days, the latest of which being the impending retirement of George “Bob” Currier from his current position as an assistant principal at East Providence High School.

Currier, who is familiar to most by his middle name rather than his given name, has been in the high school administration since 2018. His decision to step aside after 28 years in the system was announced by district Human Resources Director Mark Williamson, himself a relatively new hire into the central office, at the May 12 School Committee meeting in the new EPHS auditorium.

Williamson said Currier’s departure takes effect on Friday, July 29. He began his tenure in September 1994 when hired as an English teacher at EPHS. Currier later became the department chair in 2009. He took on his latest assignment in August of 2018.

Currier’s father, George R. Currier Sr., was a Mathematics teacher in the district for 35 years, from 1951-86.

EPHS principal Bill Black had the following to say about Currier: “Bob is extremely respected by students and staff. He has put a lot of hard work into the high school for many years. Mr. Currier is a true ‘Townie’ who always puts the needs of students first and he will be dearly missed.”

The announcement of Currier’s leave is the latest in a growing list of those who have chosen to retire or resign of their own volition.

Russell, Feola depart
The departures actually started some two months ago when Superintendent Kathryn Crowley announced she would be stepping away from her position at the end her contract, which expires in January 2023. Crowley came to the system in the fall of 2015.

The School Committee moved quickly, hiring assistant superintendent and long-time district employee Dr. Sandra Forand to the role. Forand will guide the district into the next term later this summer with Crowley serving in an advisory role until her contract concludes.

At the April 2022 committee meeting, Crowley told the body of two departures. Ben Russell would be resigning as the district’s director of information technology on Friday, April 22, while Tony Feola, after some 30 years holding various roles within the department, will be retiring at the end of June 2022 from his post as the district’s director of facilities/security.

Russell spent some four-and-half-years in the district after being hired in the fall of 2017. Feola began his career in the school department back in December of 1992 as part-time custodian.

A replacement for Feola has yet to be announced. As for Russell’s position, Williamson informed the committee last week current department employee Alfred Villeneuve, a top aide to Russell, was named as interim IT director beginning Monday, May 16.

Assistant ADs
As well over the winter/early spring, both of the district’s part-time assistant athletic directors — Rob Traverse and Nick Shattuck — submitted their resignations.

Traverse, a guidance counselor at EPHS, and Shattuck, a proficiency based graduation
coordinator at the high school, are expected to remain in their full-time roles.

Each took on their respective part-time assistant AD positions in 2016 when district athletic director Gregg Amore was hired into that role.

Amore, a former EPHS Social Studies teacher who is also the State Representative in the General Assembly for House District 65 in city, is currently the lone announced candidate to become the Democratic Party’s nominee for Secretary of State at the September 2022 primary election.

Two EPHS Physical Education teachers, Dan Cabral and Joseph “Jay” Monteiro, were recommended and approved to become the new assistant ADs by the School Committee at last week’s meeting. They officially take on the roles as of August 1.

Whiteknact update
While Laurie Marchand is still set to become the new permanent Martin Middle School principal later this summer in the stead of the aforementioned Black, her expected replacement at Whiteknact Elementary School has opted against taking on the role.

The committee learned last week Matthew Russo, who is principal at the Vartan Gregorian Elementary School, a 400-student Kindergarten-fifth grade building in the Fox Point section of Providence and was announced as Marchand’s successor at Whiteknact, has opted not take the post after all. Williamson said a new search to fill the position will begin immediately.