The Eagles moved the ball throughout the game, but struggled to capitalize on some of their scoring … 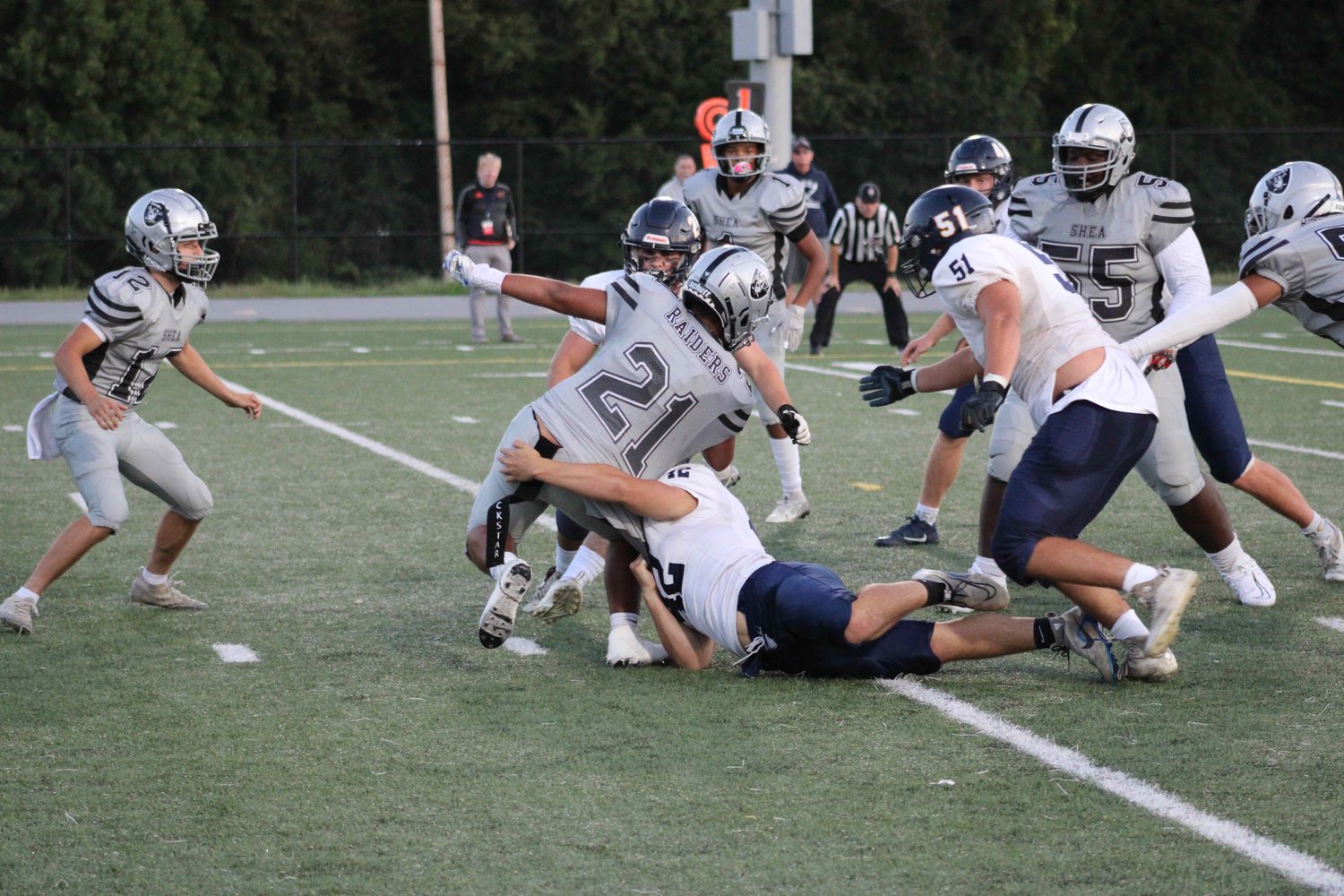 Barrington's Matt Zimmerman wraps up the Shea running back. 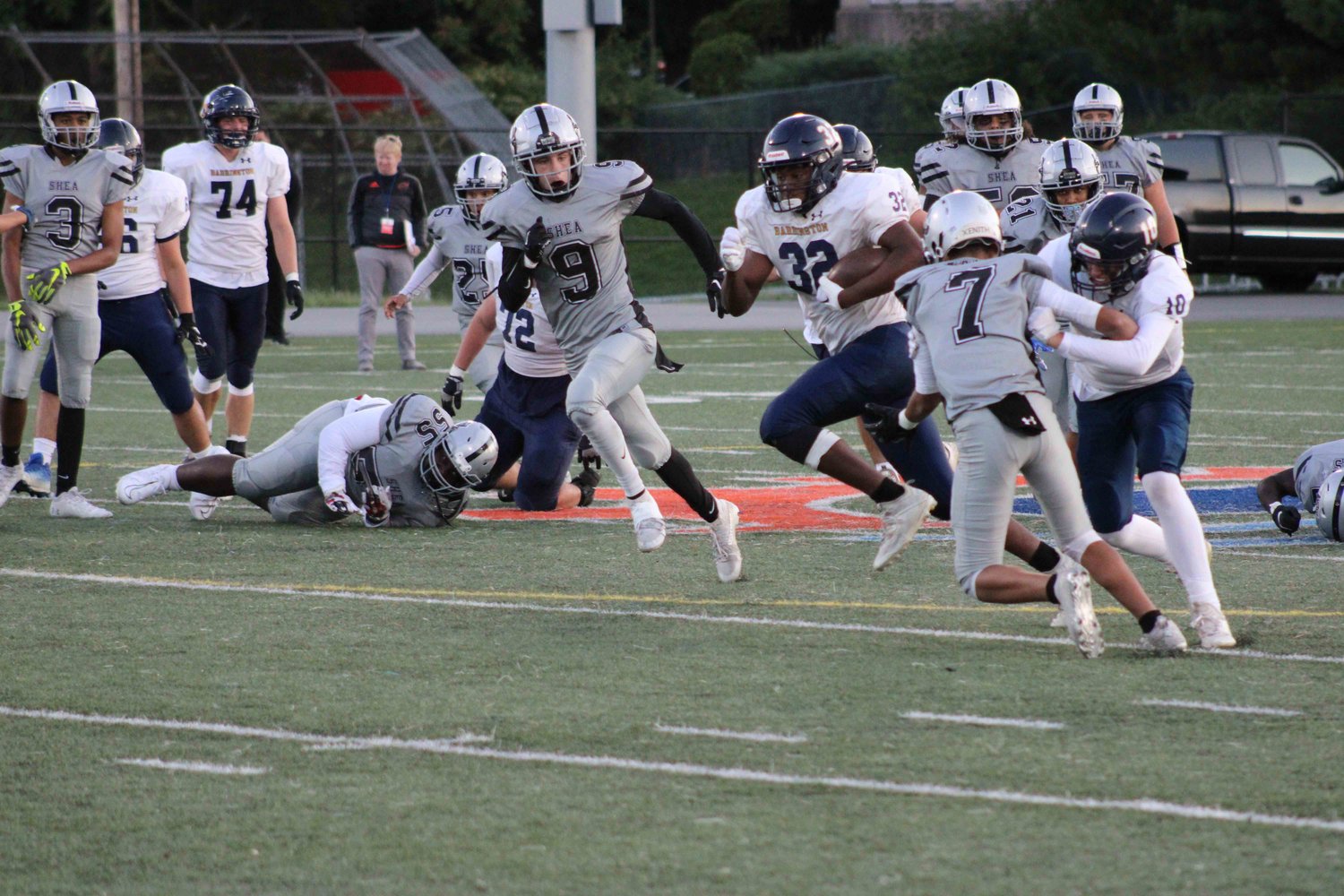 Luke Bavier (10) blocks a Shea defensive back while Payton Murphy sprints for a long gain. 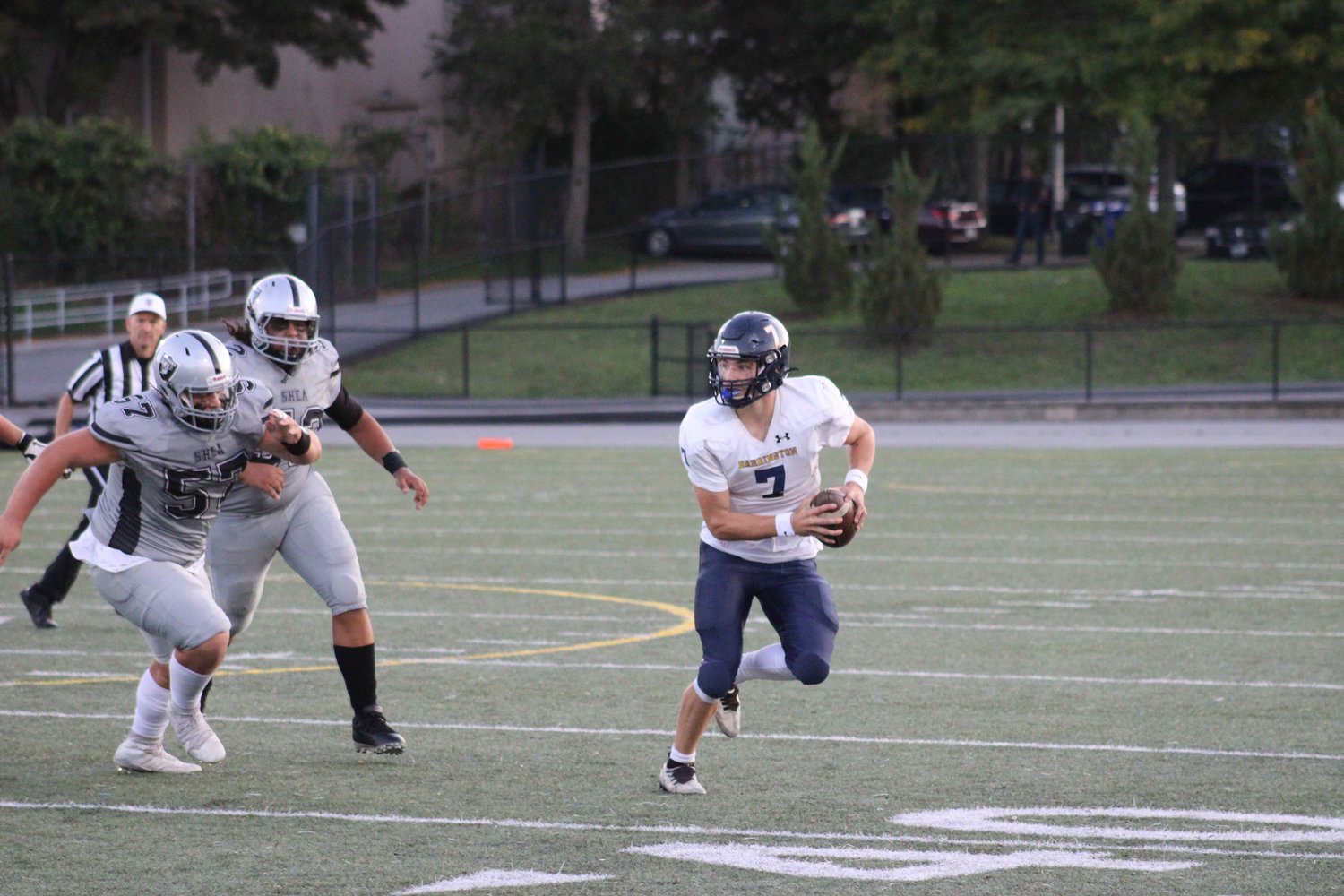 Barrington quarterback sprints away from the Shea defense. 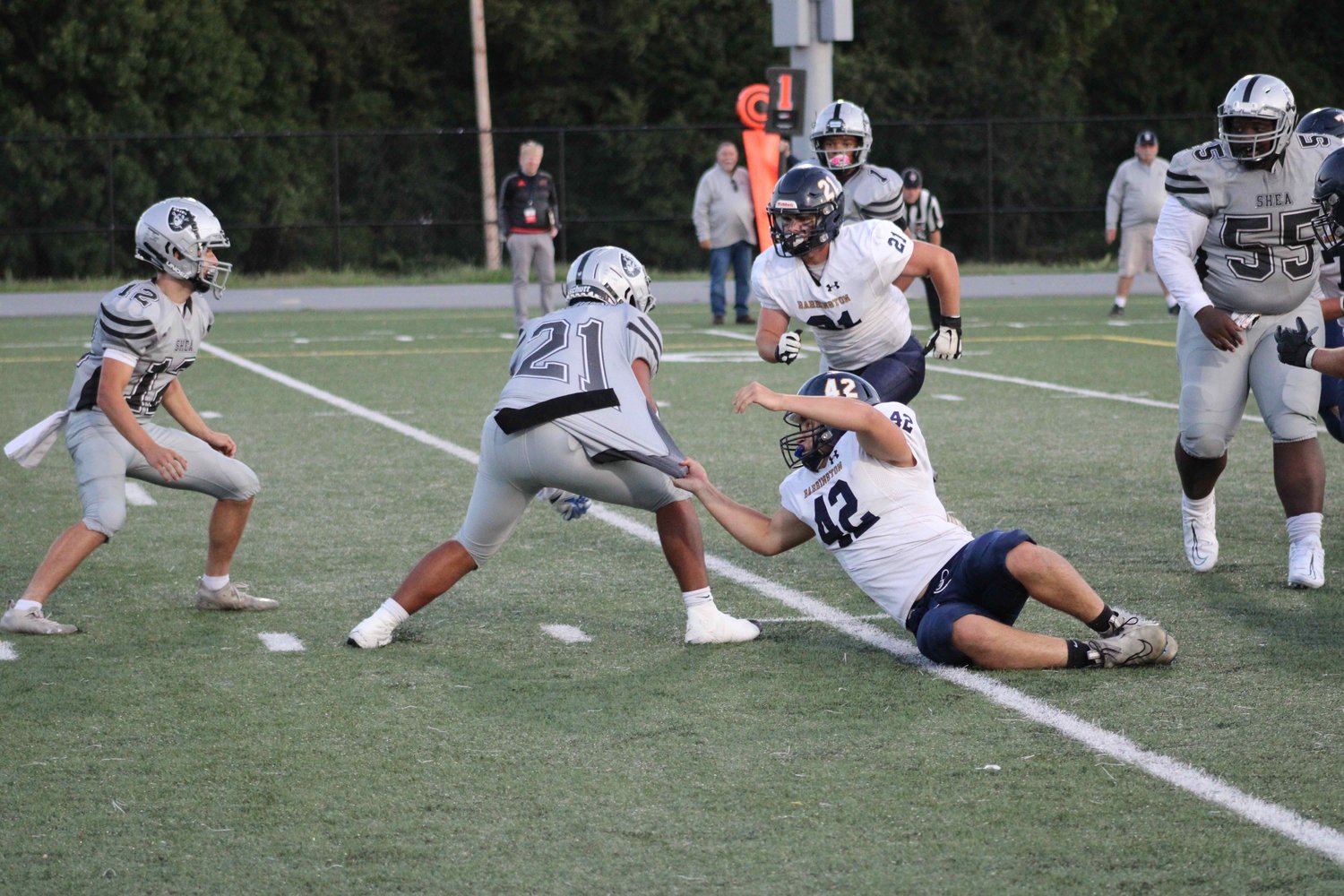 Barrington's Matt Zimmerman grabs ahold of the Shea running back. 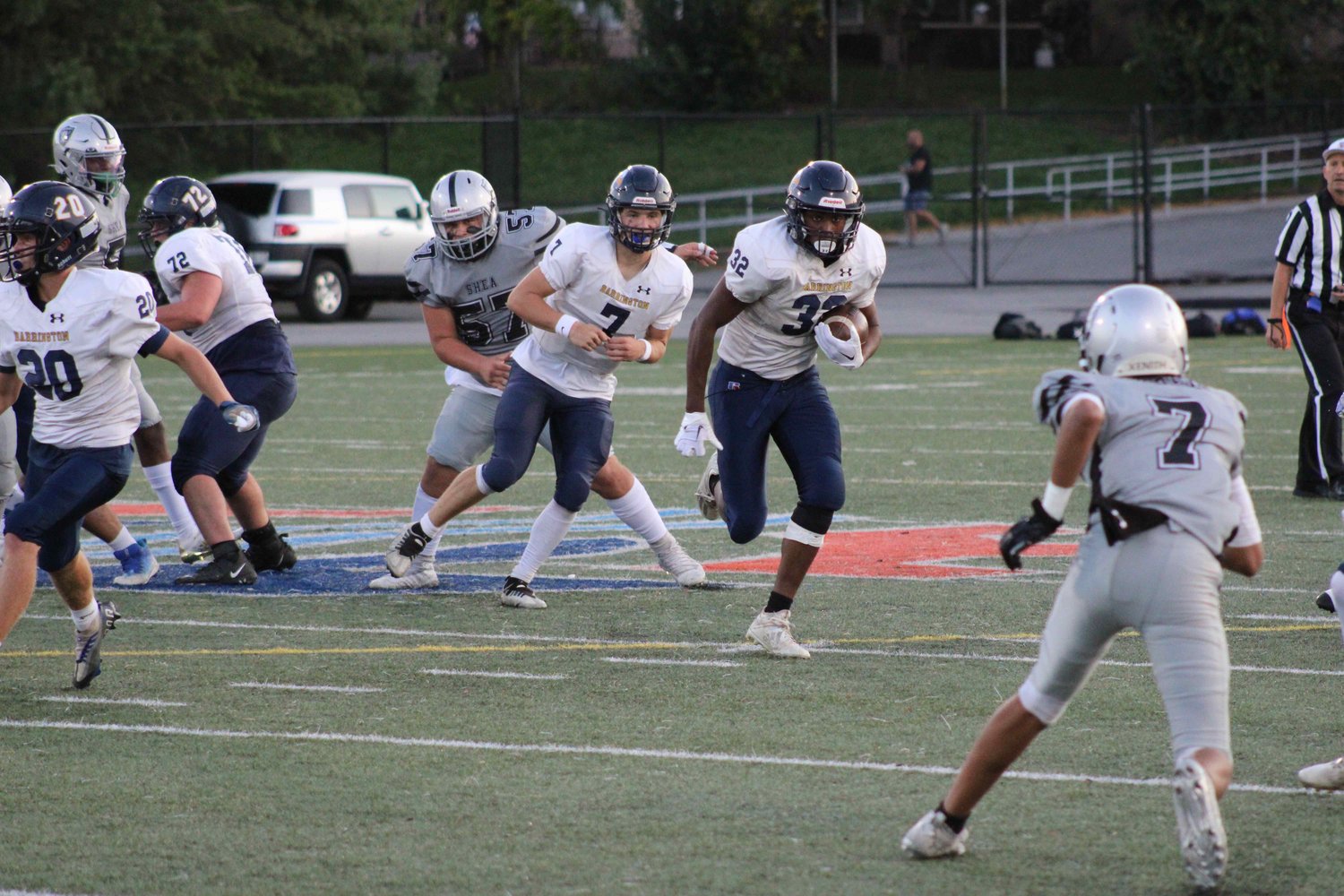 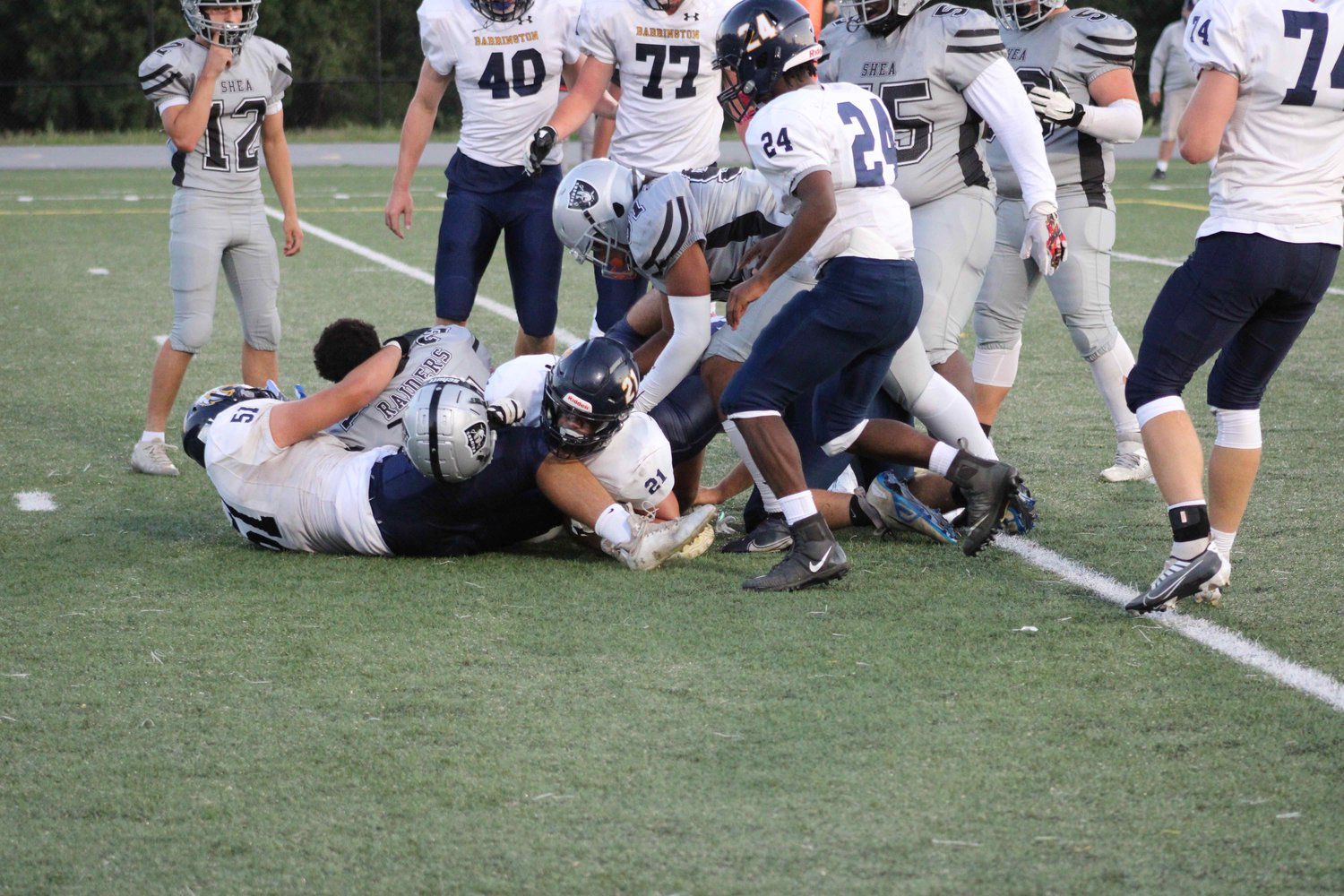 A group of Barrington tacklers rip the helmet off a Shea running back. 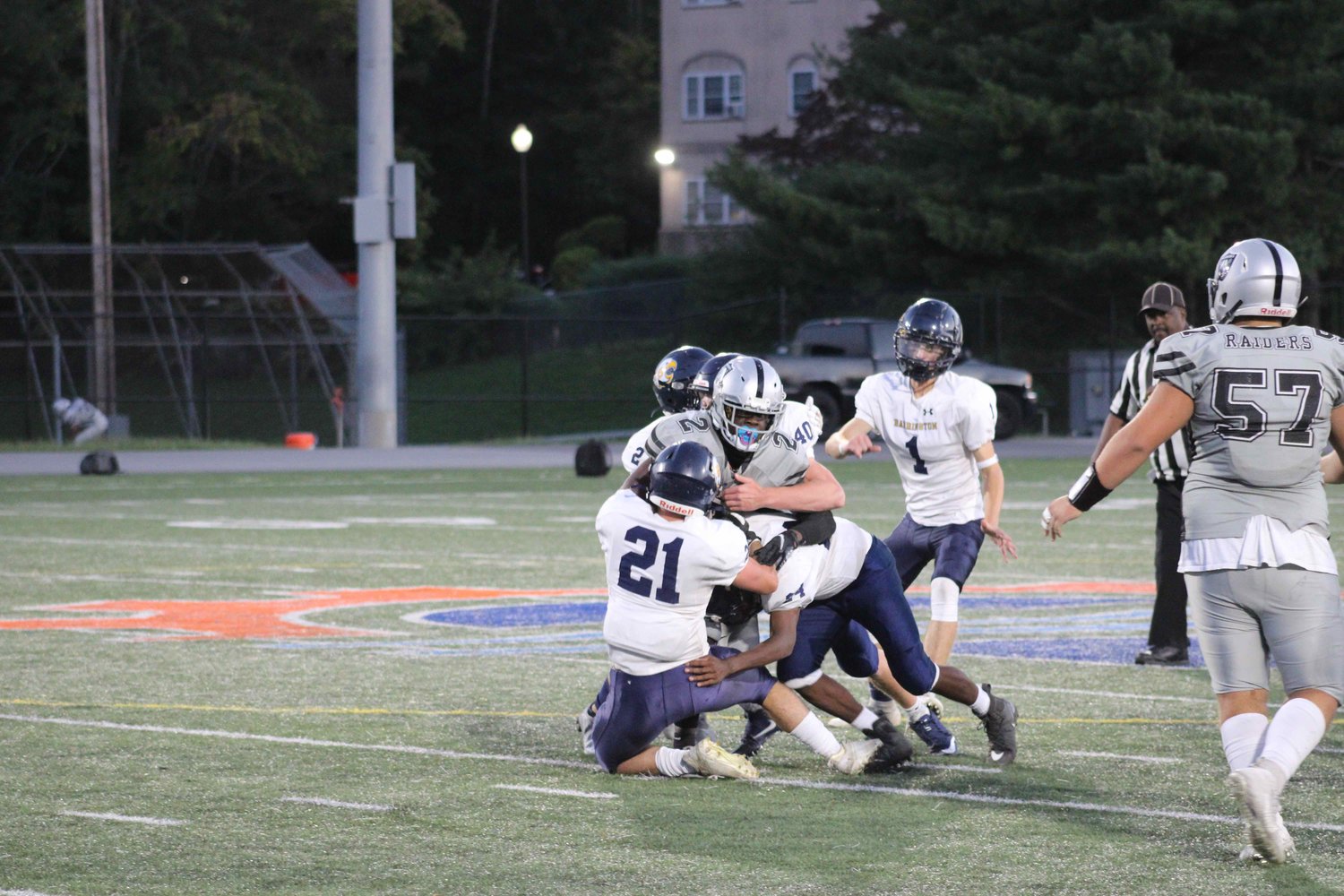 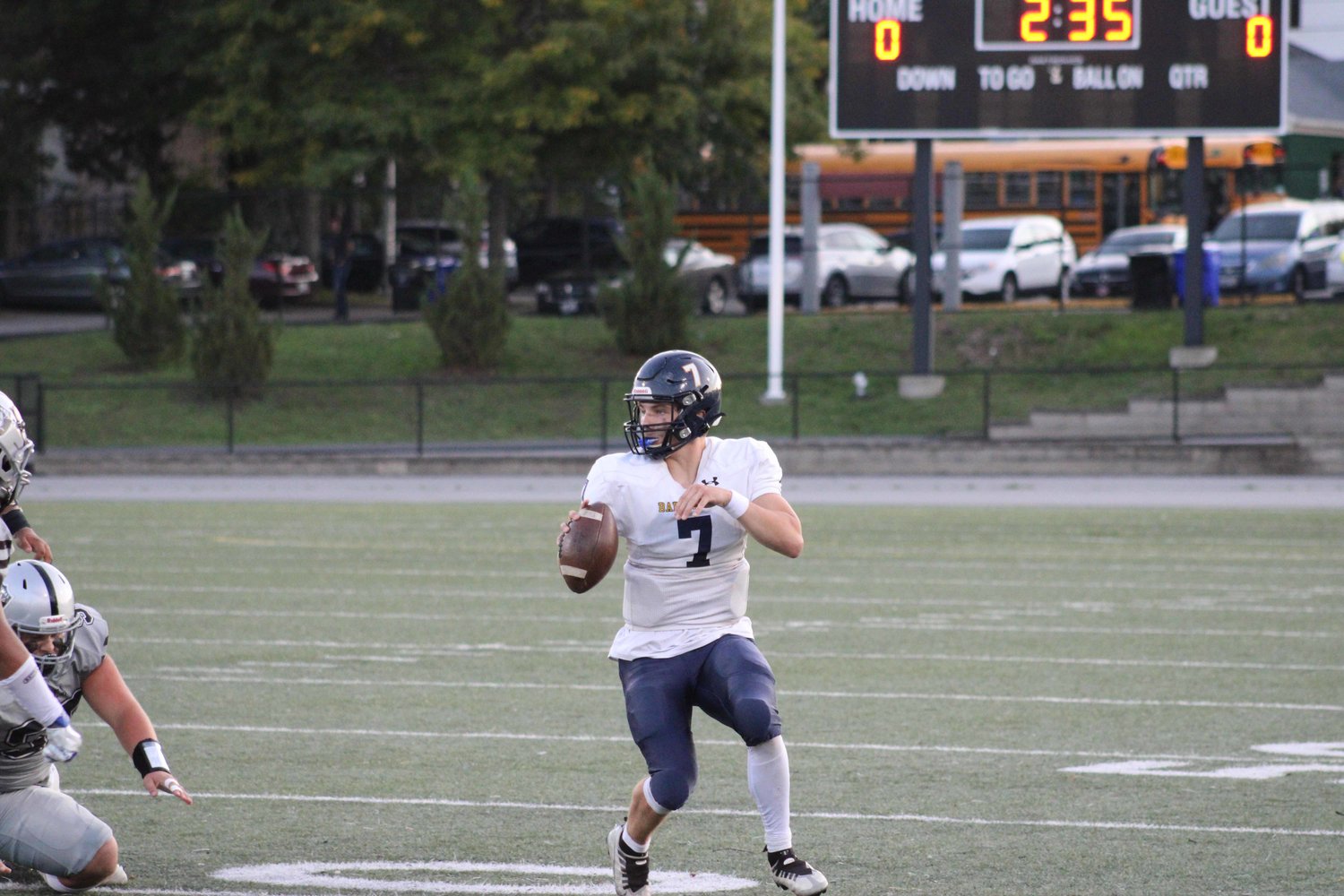 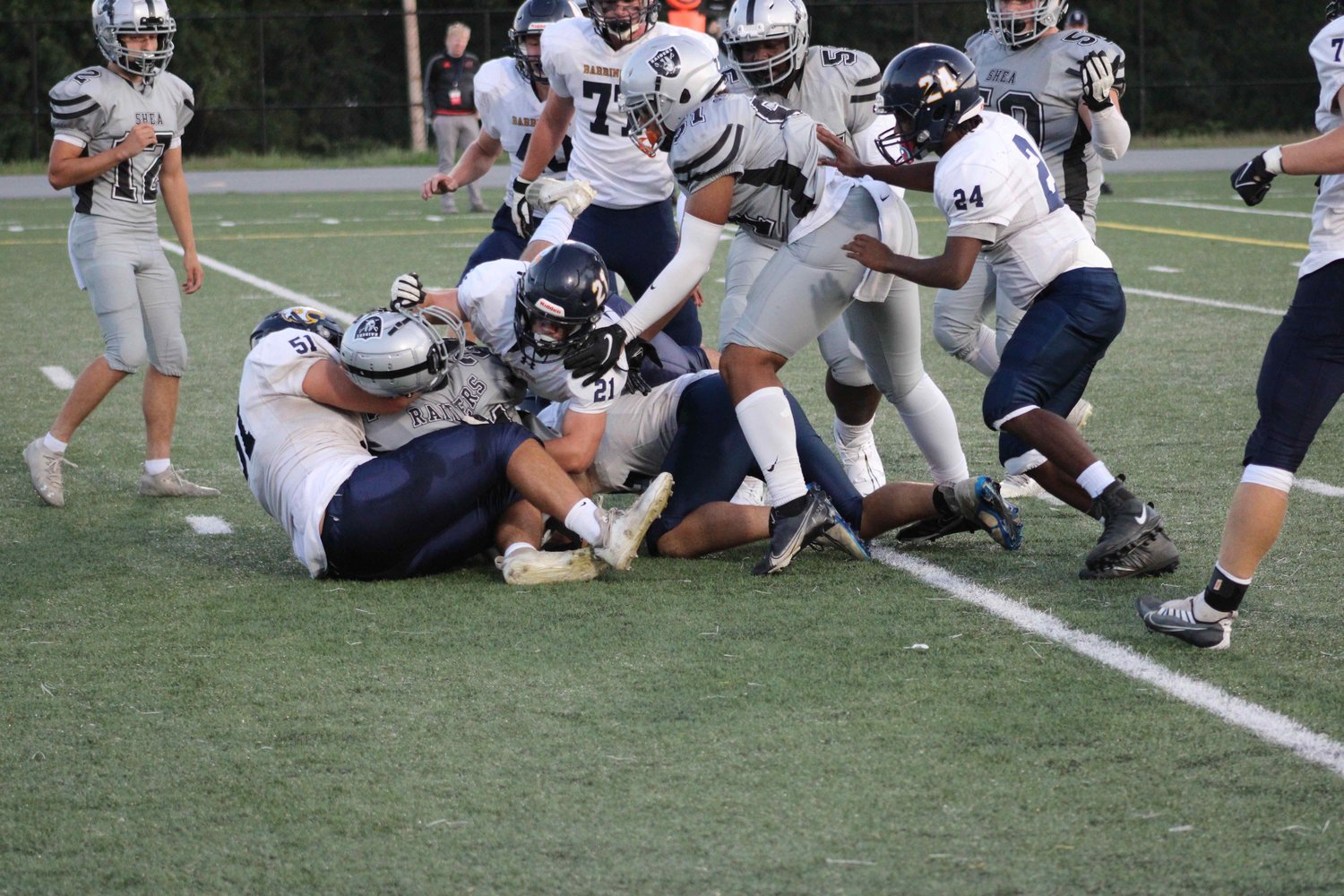 Dan Lemos (51), Noah Kranowitz (21) and Matt Zimmerman bring down a Shea running back. 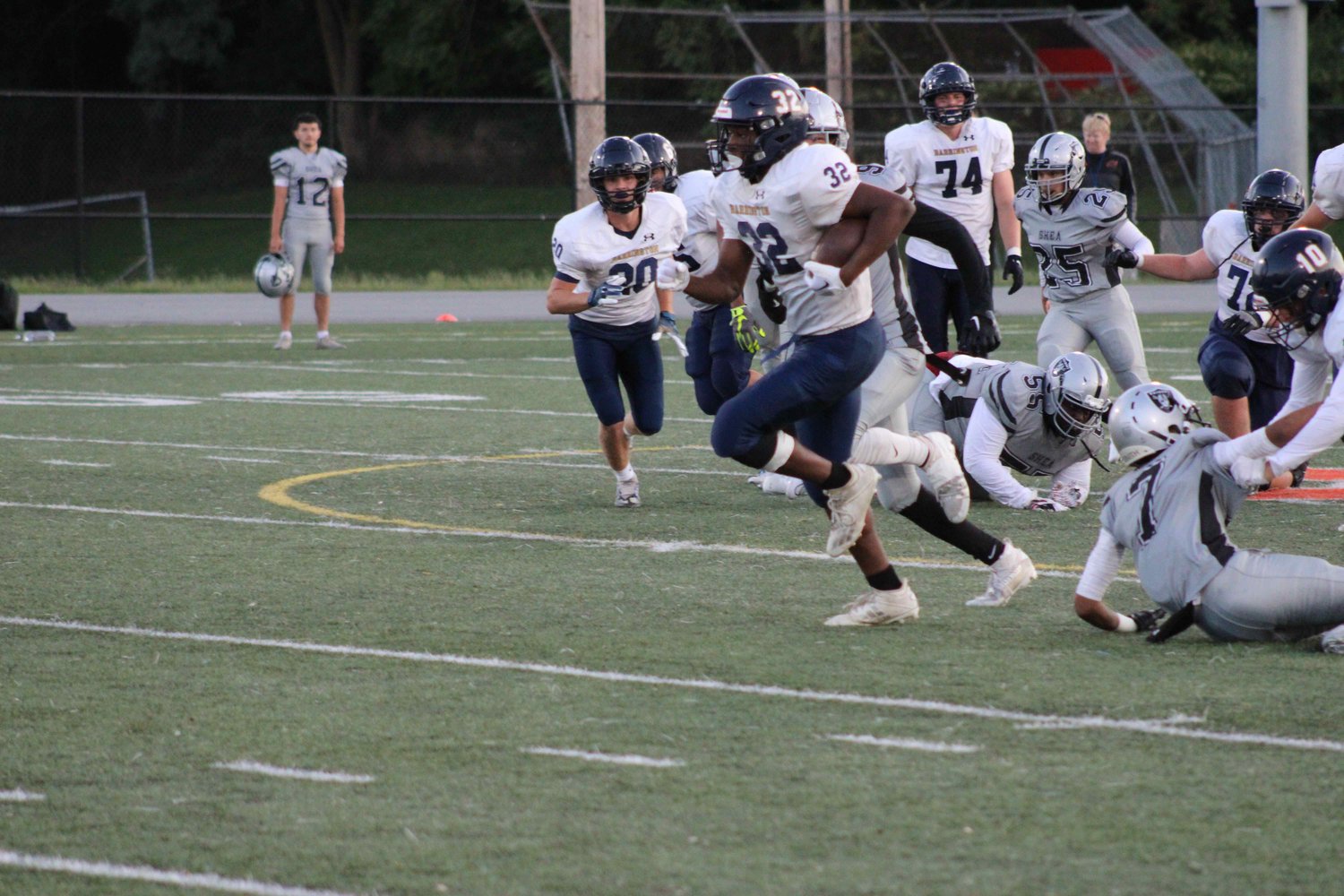 Barrington's Payton Murphy breaks into the open field for a long gain against Shea.
Previous Next
Posted Tuesday, September 20, 2022 7:59 am

The Eagles moved the ball throughout the game, but struggled to capitalize on some of their scoring opportunities, including a first and goal from the one yard line during the first half.

Barrington ran the ball up the middle four times, and players contended that they crossed the goal line on at least two of the plays, but the referees never signaled touchdown during the series.

Barrington Coach Sandy Gorham was frustrated with the outcome from that drive and the loss in general.

“Maybe it’s bad play-calling. Ball’s on the one yard, we had four shots at it and we can’t get it in,” Gorham said. “We’re banged up. We’re missing four kids on the offensive line. We tried the quarterback sneak and we can’t push the ball six inches. The kids kept calling for it. Sometimes you want to show confidence in the kids, and you say, ‘Go ahead, try it.’ Should probably tried more of an outside play. Maybe it’s bad play-calling on my part, but we should be able to punch the ball in from the one yard line.”

Barrington also threatened to score later in the first half. Fullback Payton Murphy gashed the Shea defense with a long run, but the gain was called back on a holding penalty. Unfazed, Barrington again gave the ball to Murphy who blasted through the Raiders defense for another long gain. But the first and 10 at the Shea 35 quickly turned into a fourth an 10 after three incomplete passes.

The two teams entered halftime tied, 0-0, and in the second half the Eagles’ defense picked up right where it left off. The hard-charging defensive line pressured the Shea passing attack, and on third and 19, the Raiders quarterback lofted a long pass down the sideline, but Barrington cornerback Chucky Potter intercepted the ball and returned it to the Eagles’ 49.

That turnover seemed to spark the Barrington offense, which marched down the field and grabbed a 7-0 lead. The Eagles’ eight-play drive featured runs by Murphy and AJ DiOrio, and was capped by quarterback Alex McClelland’s six-yard scoring dash. Will Hopkins kicked the extra point and with 5:37 remaining in the third quarter, the Eagles appeared to be in command.

The Raiders turned the table on the next drive. Shea capitalized on Barrington’s aggressiveness, as they ran a number of screen passes that resulted in big gains for the Raiders. Barrington’s defensive line and linebackers sprinted after the retreating quarterback only to watch as he flipped the ball to his running backs and receivers who charged down the field with blockers leading the way.

Shea scored with four seconds remaining in the quarter and tied the game 7-7.

“We went over it. We went over it,” Gorham said of the Shea screen plays. “We worked on it. They kept coming in. It’s just kids making mistakes.

“They’re young. They’re inexperienced. .. and they’ve got to grow into their jobs. We’ve got some young linebackers.”

Barrington grabbed a 14-7 lead with 5:22 remaining in the game. The Eagles ran the ball on the early downs, and then, twice facing third-and-long, relied on McClelland’s arm. The junior quarterback zipped first down passes to Jack Robinson twice on the drive, the second time moving the ball to the Shea three yard line. One play later Murphy bulled in for a touchdown.

But Barrington’s lead was short-lived. After Barrington duffed the kickoff, Shea took over possession at the Eagles’ 47 yard line. Barrington’s defense forced a third and 20, but Shea converted a long pass to the Eagles’ 29. Three plays later, Shea scored on a designed QB draw, and the Raiders took a 15-14 lead on a two-point conversion.

With 1:20 remaining in the game, Barrington’s offense went to work. The Eagles managed to get the ball into Shea territory, but a fourth-and-two came up two inches short, ending Barrington’s hopes for a last-second win.

“They don’t understand the emotion they have to play with. The second half they played with emotion,” Gorham said.

“The schedule’s going to get tougher. We’ve got Westerly. Then we’ve got Cranston East. It’s going to get tough. They’re going to have to grow up real fast. We had two holding penalties when we were moving the ball. That brought us back in the second quarter. We could have had two touchdowns… We just didn’t get the job done. I keep telling these kids, you can’t play this game without emotions. Sometimes I have to get in there and holler a little bit just to get them going. It’s too bad. We should have won this game.”