Every Student Initiative kicks off discussion at middle school

PORTSMOUTH — Nathan Bruno was not in the Portsmouth Middle School library, but 10 of his friends were there to speak loud and clear on his behalf.

Every Student Initiative kicks off discussion at middle school 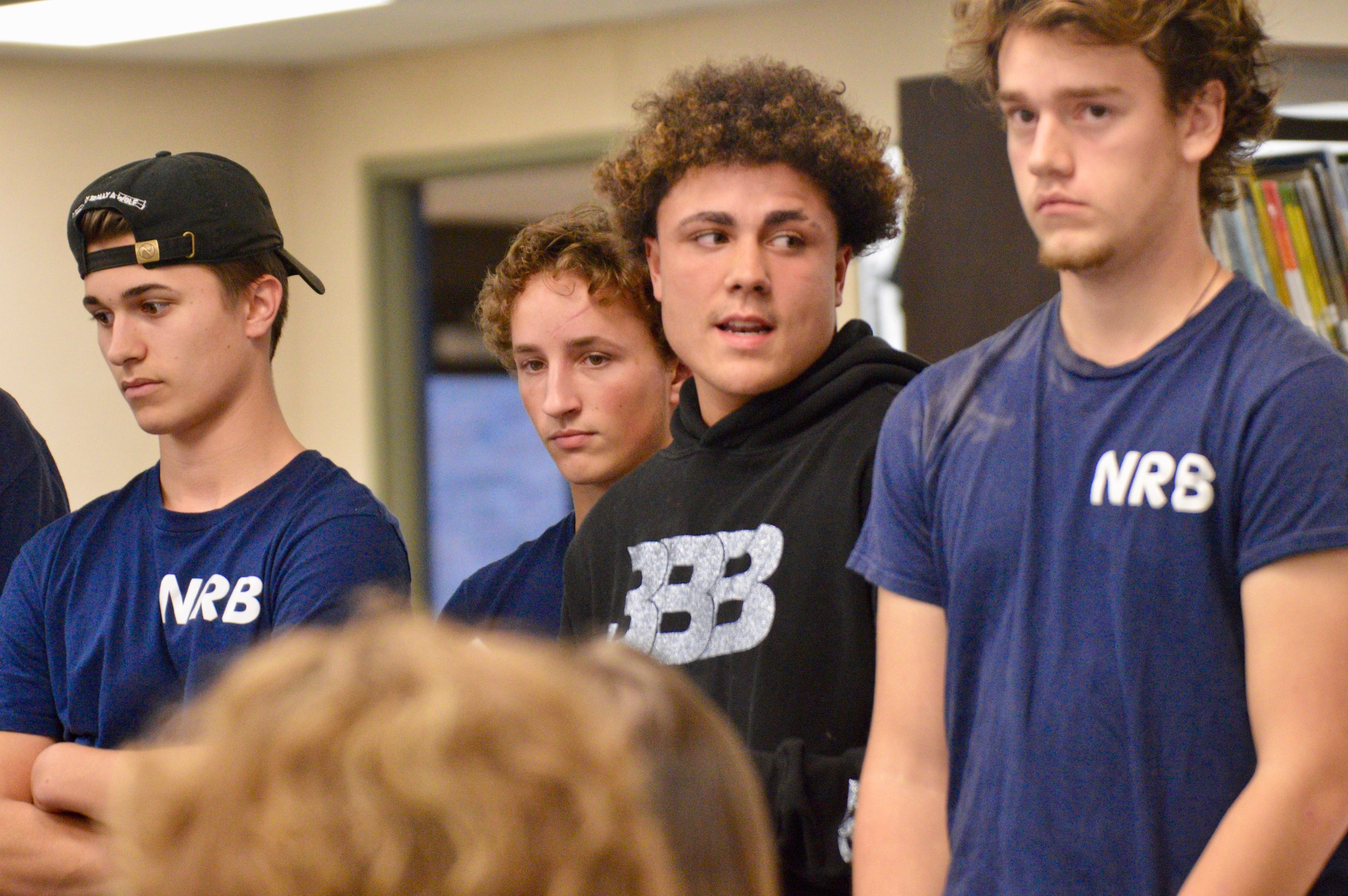 “The world is currently amidst a suicide pandemic,” said Tyree Evans (second from right), project manager of Every Student Initiative. “Stigmas need to be broken, and as a society we have to begin to talk about these things.”
Jim McGaw 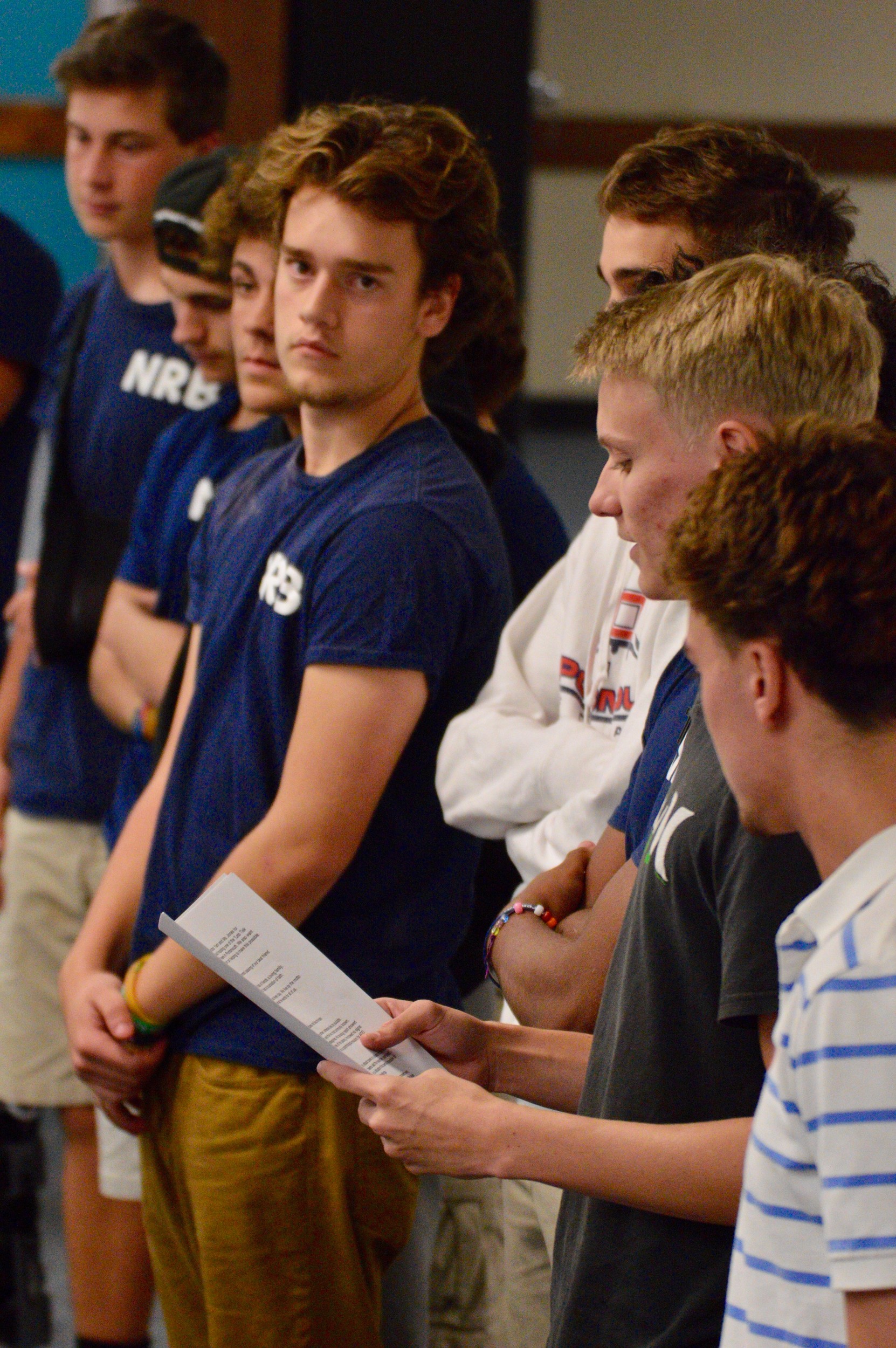 Collin Cord (center, facing camera) listens to Owen Ross as members of the Every Student Initiative make remarks at the start of the forum. Collin is the group’s student outreach coordinator, Owen its president.
Jim McGaw 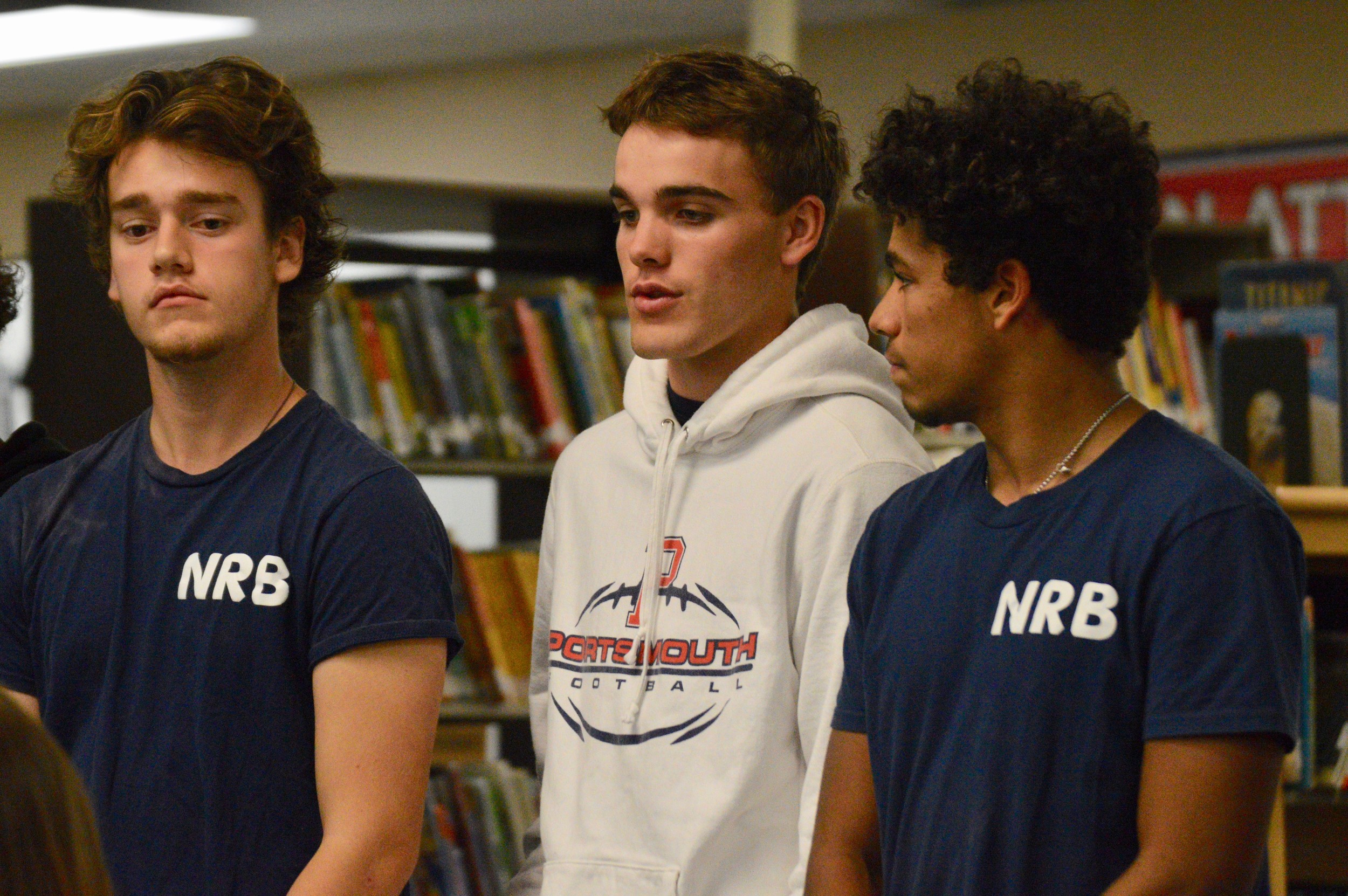 “If we don’t first acknowledge that we have a problem, then we can never make progress towards ending it,” said Connor Perry (center), communications coordinator of Every Student Initiative. He’s flanked by fellow members Collin Cord (left) and Angel Duclos.
Jim McGaw 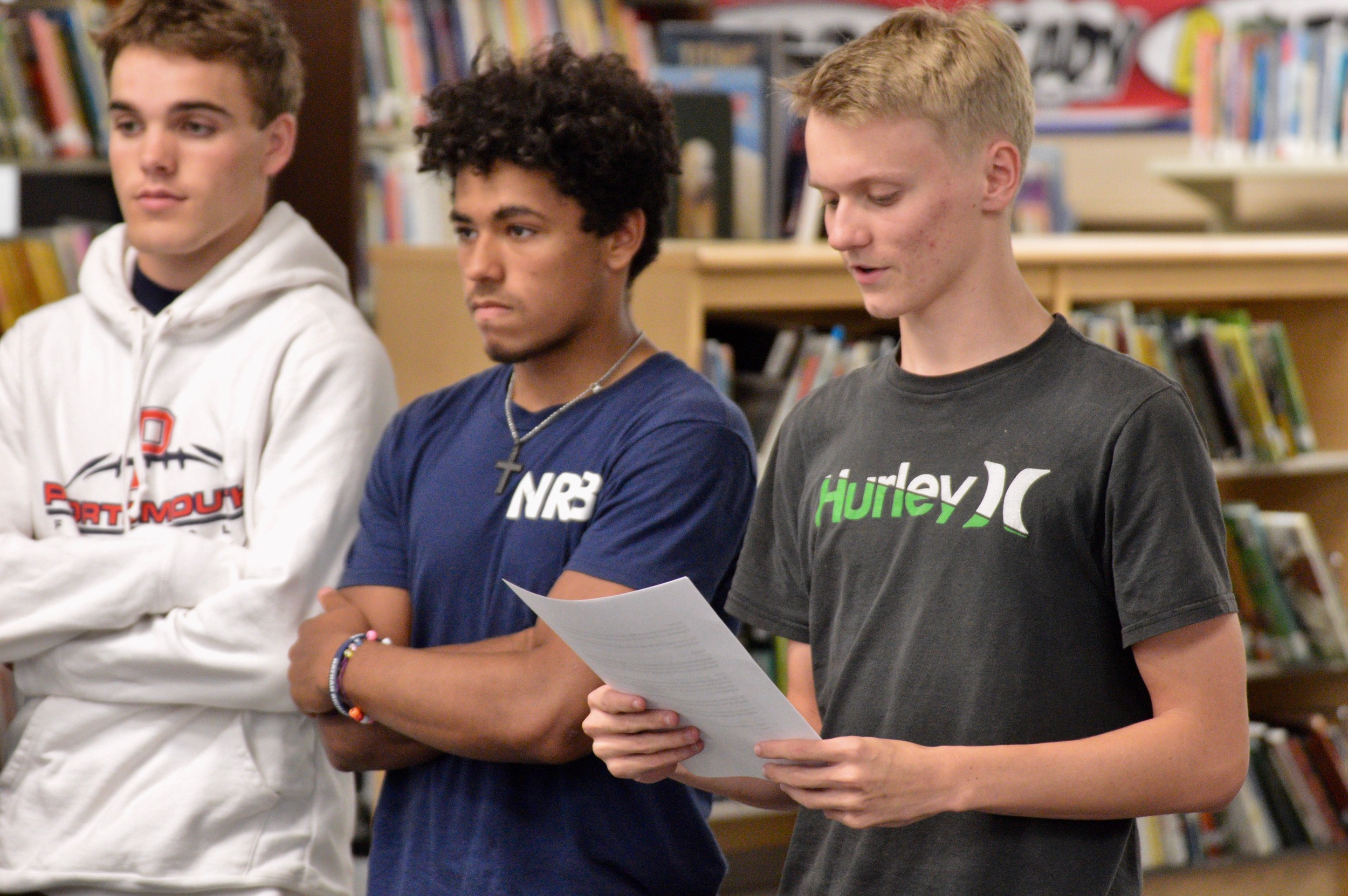 Owen Ross, a PHS junior and president of Every Student Initiative, explains how the group was formed after the suicide of their friend, Nathan Bruno, earlier this year. Connor Perry (far left) and Angel Duclos, wait their turn to speak.
Jim McGaw 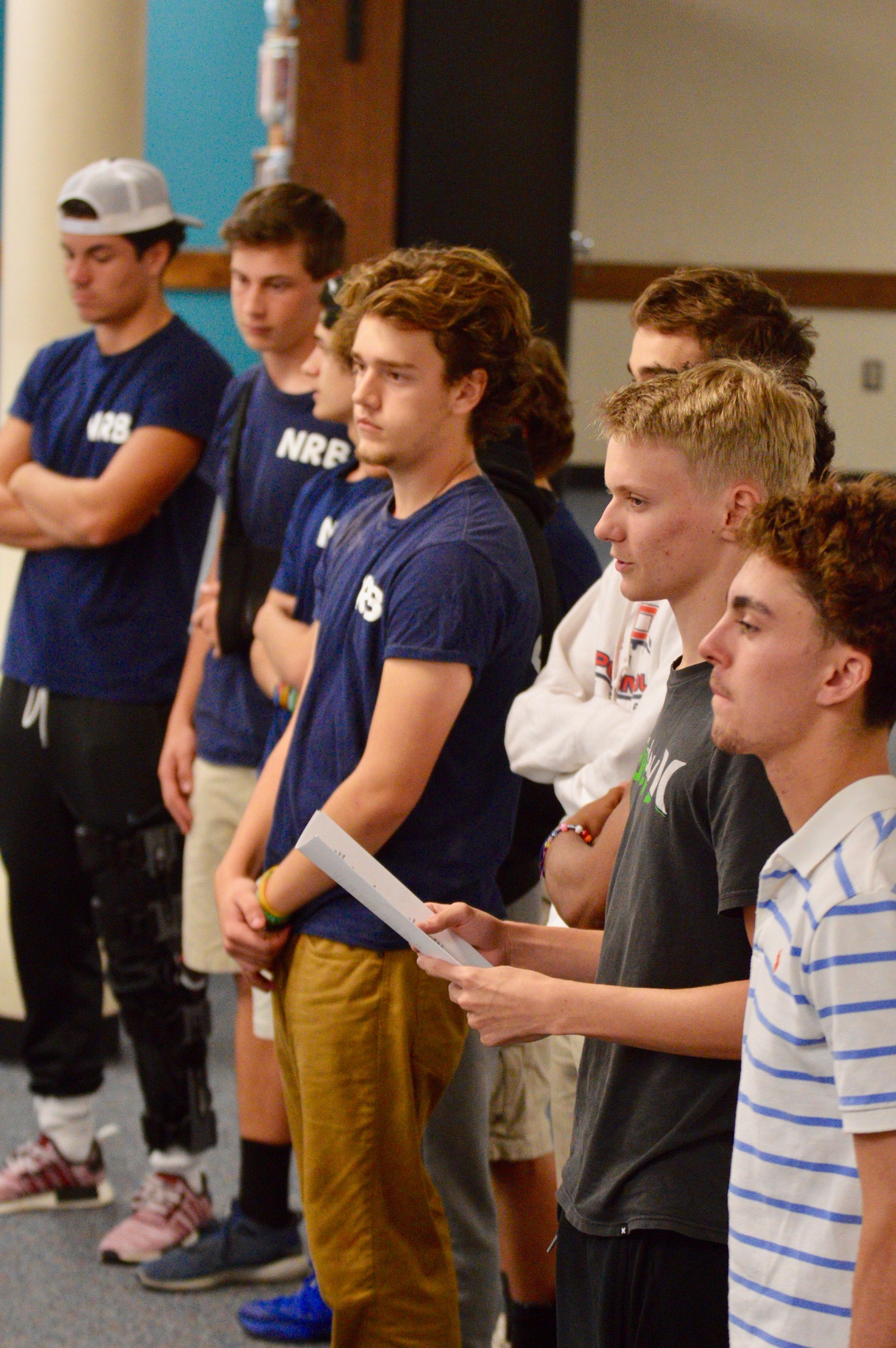 Members of Every Student Initiative, all juniors at Portsmouth High School, talk about the need for open communication about suicide and mental health issues in general.
Jim McGaw 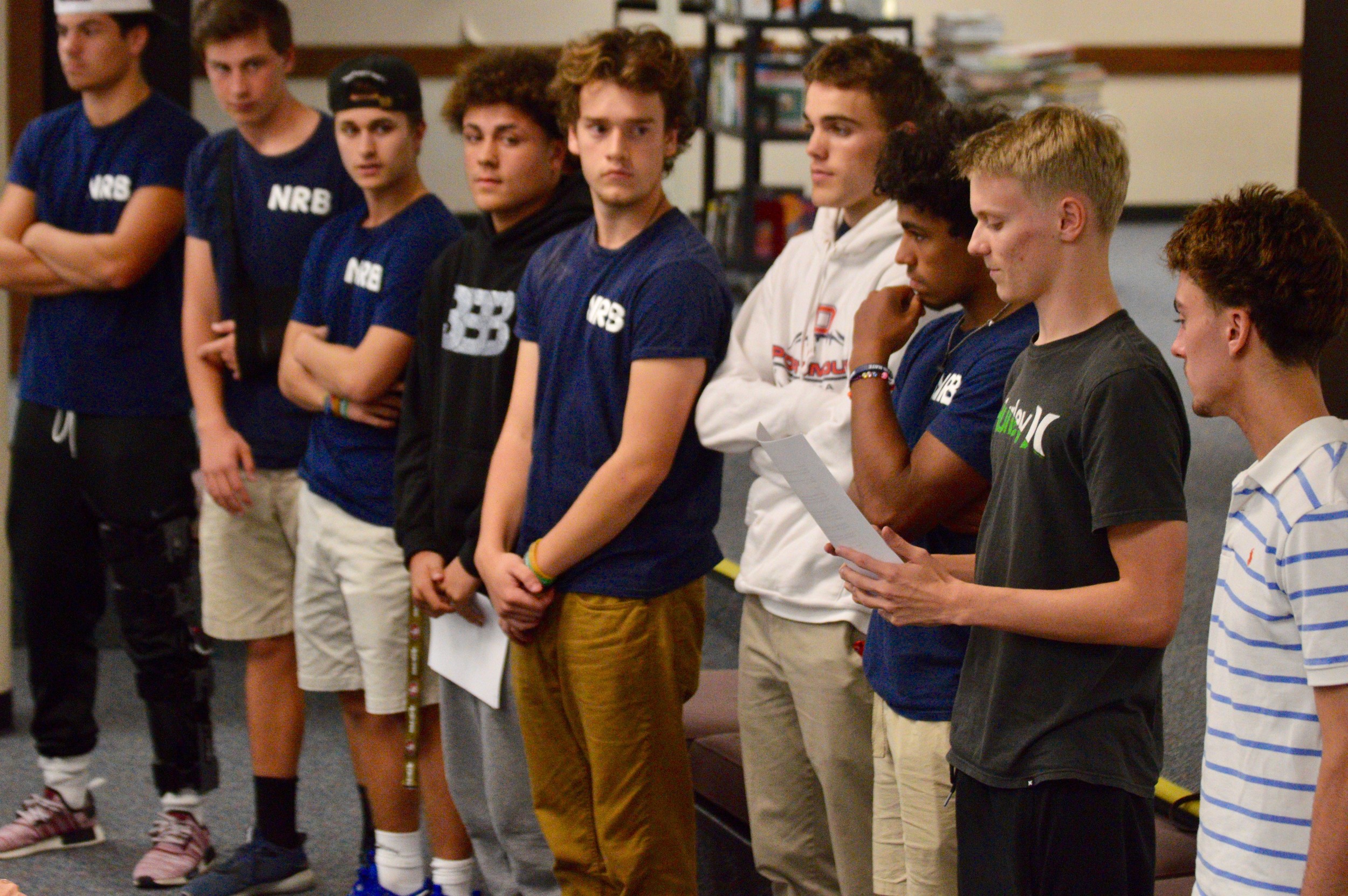 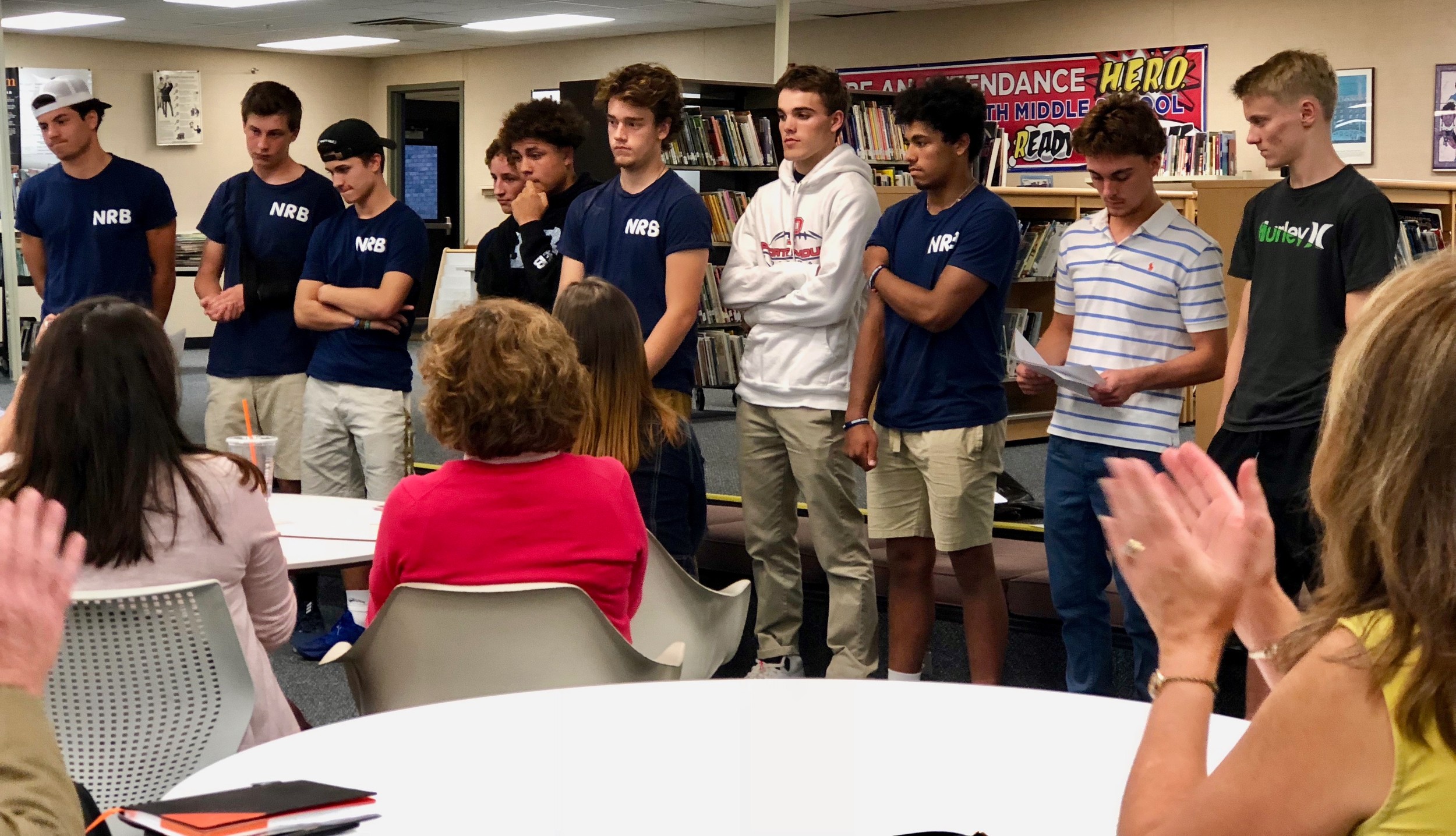 Change needs to happen. Stigmas need to be broken, and as a society we have to begin to talk about these things.”
Tyree Evans, Every Student Initiative

PORTSMOUTH — Nathan Bruno was not in the Portsmouth Middle School library, but 10 of his friends were there to speak loud and clear on his behalf.

Nathan, a popular student who had a knack for making people laugh, died by suicide in February. He was 15. Several of his friends — now juniors at Portsmouth High School — formed the Every Student Initiative in the wake of his death to advocate for more mental-health resources for students in the schools.

To hear what some state leaders had to say at the forum, click here.

Lining up in front of about 50 people during a mental health forum led by several key Rhode Island government officials on Wednesday, Oct. 3, the boys shared their memories of Nathan and why their friend’s death cannot be in vain.

“Nathan is still strongly on the minds of all of us every day,” said Owen Ross, the group’s president. “We live by the motto ‘Be Great for Nate’ because we know it is what he wants for all of us.”

Students pointed out that Nathan’s death didn’t fit the typical pattern of most suicides.

“Suicide does not fit within a mold. Suicide does not discriminate,” said Collin Cord, the group’s student outreach coordinator. “There are many factors that come into play when someone dies by suicide; substance dependence and mental health are the two most commonly known. But our friend Nathan did not fit in these categories. His toxicology report showed no drugs and alcohol in his system at the time of his passing. He showed no signs of depression, anxiety or suicidal ideation in a psychological evaluation for ADD last year, and no social difficulties.”

Nathan, however, still needed help because he was in an emotional crisis, they said, said Eric Federico, the group’s community outreach coordinator.

“Nathan seemed to have an emotional heart attack based on a situation in his life,” said Eric, adding that most teens say the reason they attempted suicide “was that they were trying to escape a situation that seems impossible to deal with or to get relief from bad thoughts or feelings.”

Tyree Evans, the student group’s project manager, said the world is in the midst of a suicide pandemic.

“The World Health Organization estimates that suicide rates will double in the next two years. In the United States, both teen boy and girl suicide rates are drastically increasing — girls at the highest rate it has ever been,” said Tyree.

Later on in the forum, one student cited the 2017 Youth Risk Behavior Survey of Rhode Island students, which found that 23 percent of respondents from middle school and 29 percent from high school reported feeling sad or hopeless for two or more weeks in a row.

“Change needs to happen. Stigmas need to be broken, and as a society we have to begin to talk about these things,” said Tyree.

Stevie Alix, the group’s assistant community outreach coordinator, did just that, sharing how addiction and suicide have directly impacted his life.

“In January 2016 my grandpa died by suicide after his cancer diagnosis. Then in October of 2016 my aunt died by an accidental overdose. In February of 2018 my close friend Nathan was lost to suicide, and just a few weeks later a close family friend died by suicide as well,” Stevie said.

He implored those in the room to spread the group’s message along to someone they know. “We all must work together to support each other and build connections. We must fight to end addiction and suicide, because I have already lost so much, and it is a pain no one deserves,” he said.

Every Student Initiative hopes to meet with policy-makers in the legislature, law enforcement and education to consider adapting some of its proposals. Part of the group’s platform includes:

• training for teachers and other school staff members on recognizing the signs of a distressed teen and the actions to take.

•  a clearer policy to ensure parents are immediately notified when there’s some kind of disciplinary problem or other issue.

• a stronger focus on mental health issues in the schools’ health curriculum.

• establishing “Mental Health Mondays” during which some facts about teen mental health would be broadcast during announcements. The group says it’s already working with PHS to start this initiative.

• encouraging teens and other community members to add the Crisis Text Line to their phone contacts. Users can find someone to talk to by using the 24-hour hotline, which is 741-741.

“Our group knowns just how important this is,” said Angel Duclos, the group’s vice president. “That is why we are working with legislators to turn our ideas into law so that no one has to go through what our friend Nathan did — and that no one has to feel the pain that we do every day.”

Added Liam Griffiths, the group’s assistant student outreach coordinator, “We strong believe we need to start connecting as a society rather than dividing. Open yourself up to talking to those that are not like you. Build connections with the people you meet. Know the signs of a distressed individual and where to turn.”

For more about Every Student Initiative, including the group’s full platform, visit www.everystudentinitiative.org.

Ask the candidates: Should the district resolve the fired teachers' lawsuit?