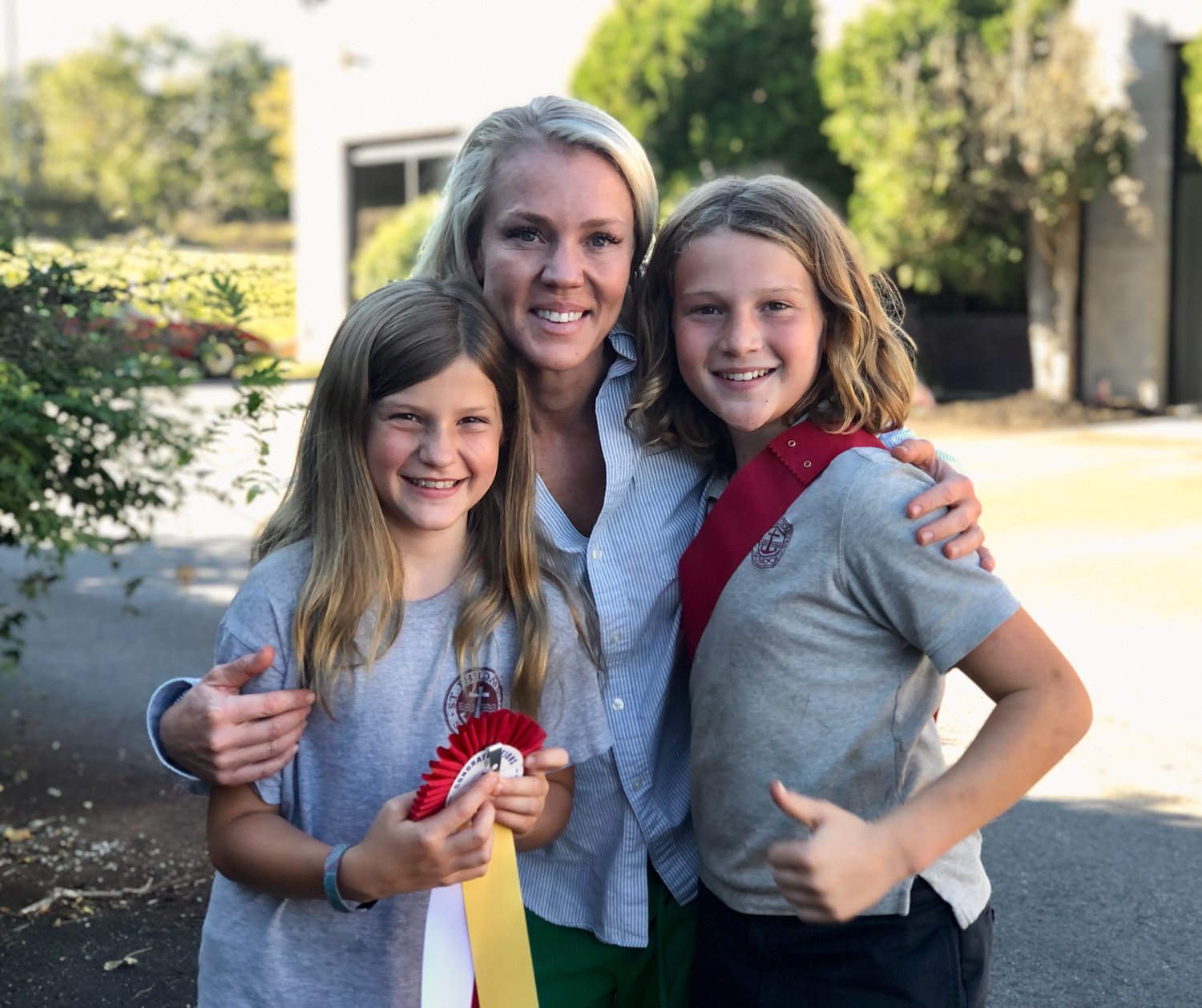 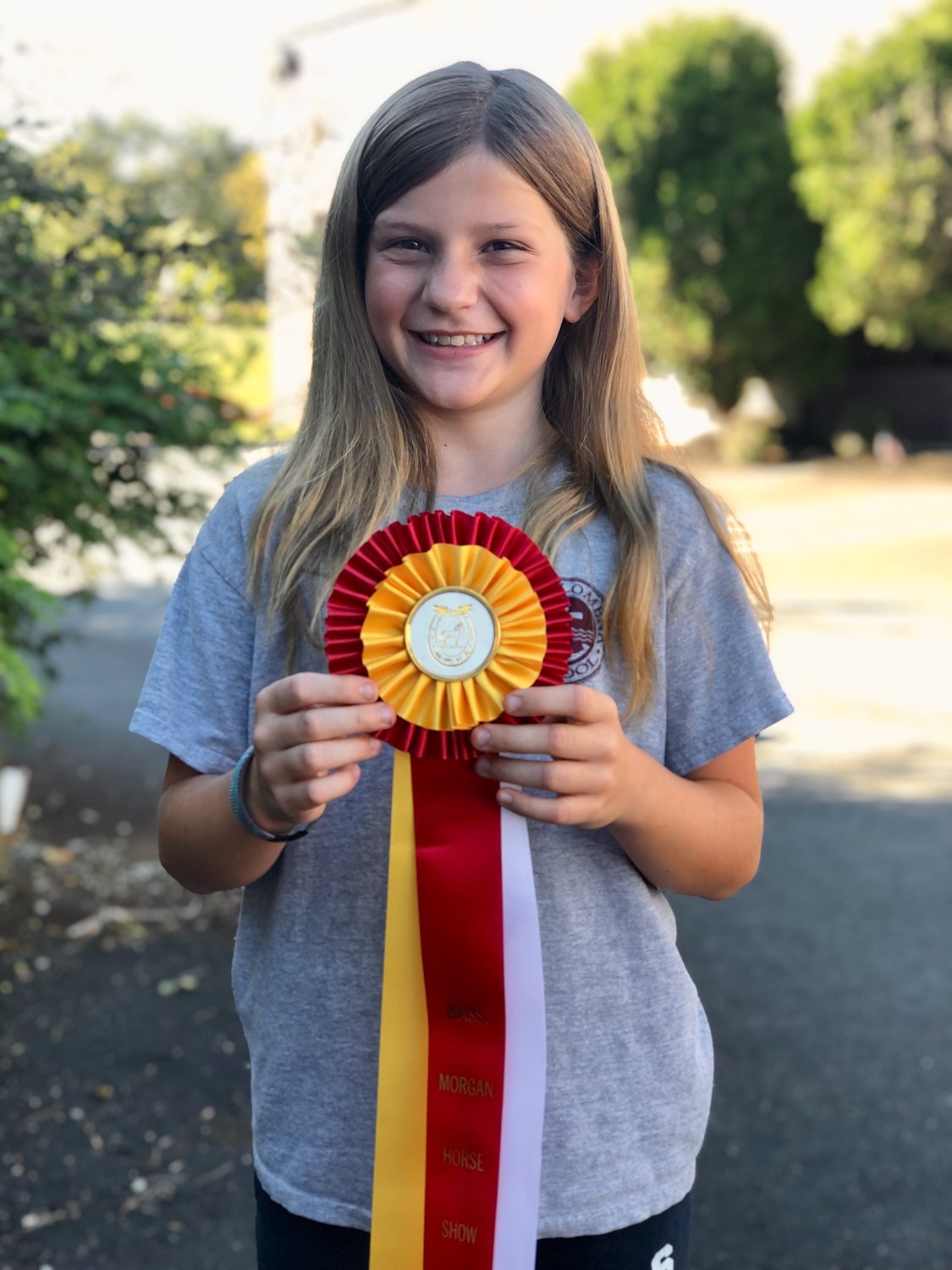 Avery Noel with one of the blue ribbons she won in a recent horse show. She was one of the youngest competitors in the Morgan horse show in Oklahoma City last week.
JIM MCGAW
Previous Next
Posted Monday, October 18, 2021 10:36 pm
By Jim McGaw

The St. Philomena School student, one of the youngest participants at the prestigious show, has been riding since she was 6. “I got more interested in horseback riding because mom used to horseback ride,” said Avery.

That would be Chelsea Noel, a physical therapist and strength and conditioning specialist at Peak Fitness in the Portsmouth Business Park. She was in the same show in the early ’90s, but no longer competes.

“Unfortunately, there’s only room for one of us in my wallet,” Chelsea joked.

Avery’s appearances on the Morgan horse show circuit was never her family’s intent, but that all changed when she took part in an “academy” horse show, which is an entry-level event.

“Her first pass into the ring, it was so clear she wanted to do this because it was the most joy I’ve ever seen on her face,” Chelsea said.

Then the family ended up in a fortunate situation where Riley entered their lives. “He was affordable and came along at the right time, which is unheard of in this business,” she said.

Avery then went to “Mass Morgan” — the Massachusetts Morgan Horse Show — at the Eastern States Exposition. She came in reserve, which qualified her for the Oklahoma show.

“One thing led to another; this was not the plan,” Chelsea said.

A Morgan horse is characterized by its compact and muscular but refined build, expressive head, and well-arched neck. They’re known for their versatility and take part in several different English and Western events.

“They pick their legs up higher than most other horses, and they’re much nicer,” said Avery, who got Riley last summer and rides him locally at Anne Benson Stables at Stonegate Farm on Middle Road. “He’s 10 and has a little bit of back pain. He’s a kids’ horse because of that.”

Despite Riley's bad back, Avery is very fond of him.“He’s just very sweet to me. He gives me hugs when I hug him. I just love him,” she said.

She’s so into horses now that she’s already thinking about them as a career choice. “My teacher had me write a paragraph about what I wanted to be when I grow up and I said I want to be a person who teaches people with disabilities how to horseback ride,” she said.

Avery, who has also competed in Connecticut, Massachusetts and New Hampshire, explained how she “shows” a horse during these events. “In ‘equitation,’ they look at you and your horse is not that important, but you’re a team so they’re looking at both of you,” said Avery, who wears a special riding suit during competition. “In ‘pleasure,’ it’s more about your horse.”

Asked whether she was nervous the day before flying out to Oklahoma, Avery smiled and nodded her head.

“We were trying to come up with a word that meant nervous and excited all at the same time,” said Chelsea, who hired a limo driver to take them to the airport early last Friday morning as a way of celebrating her daughter’s accomplishment of qualifying for the event. “Competing, she’s definitely on the younger spectrum.”

Fortunately for Avery, her big brother Mason, 12, has supported her efforts from the get-go. Also a St. Philomena Student, Mason helped in Avery’s fund-raisers that were held at Peak Fitness; the pair sold homemade electrolytes to friends and patrons who were generous with their money.

“We didn’t put a price on the electrolytes; you just had to leave something. A lot of people were putting in 20-dollar bills, 10-dollar bills,” said Mason, a hockey player whose Warwick Junior Blues team won a championship last year.

Brother and sister raised about $3,000 from donors who practically watched the kids grow up at Peak Fitness, where Chelsea has worked for 10 years. Mason said it felt good to help his sister out, and he shared a bold prediction about the horse show:

“We are going all the way. There’s going to be a big old blue ribbon on her chest!”