Portsmouth school sports: ‘Happy to be back’

PORTSMOUTH — Getting back on the court was one of the best birthday gifts Emily Colicci could have asked for.

The Portsmouth High School senior co-captain of the girls’ varsity …

Portsmouth school sports: ‘Happy to be back’ 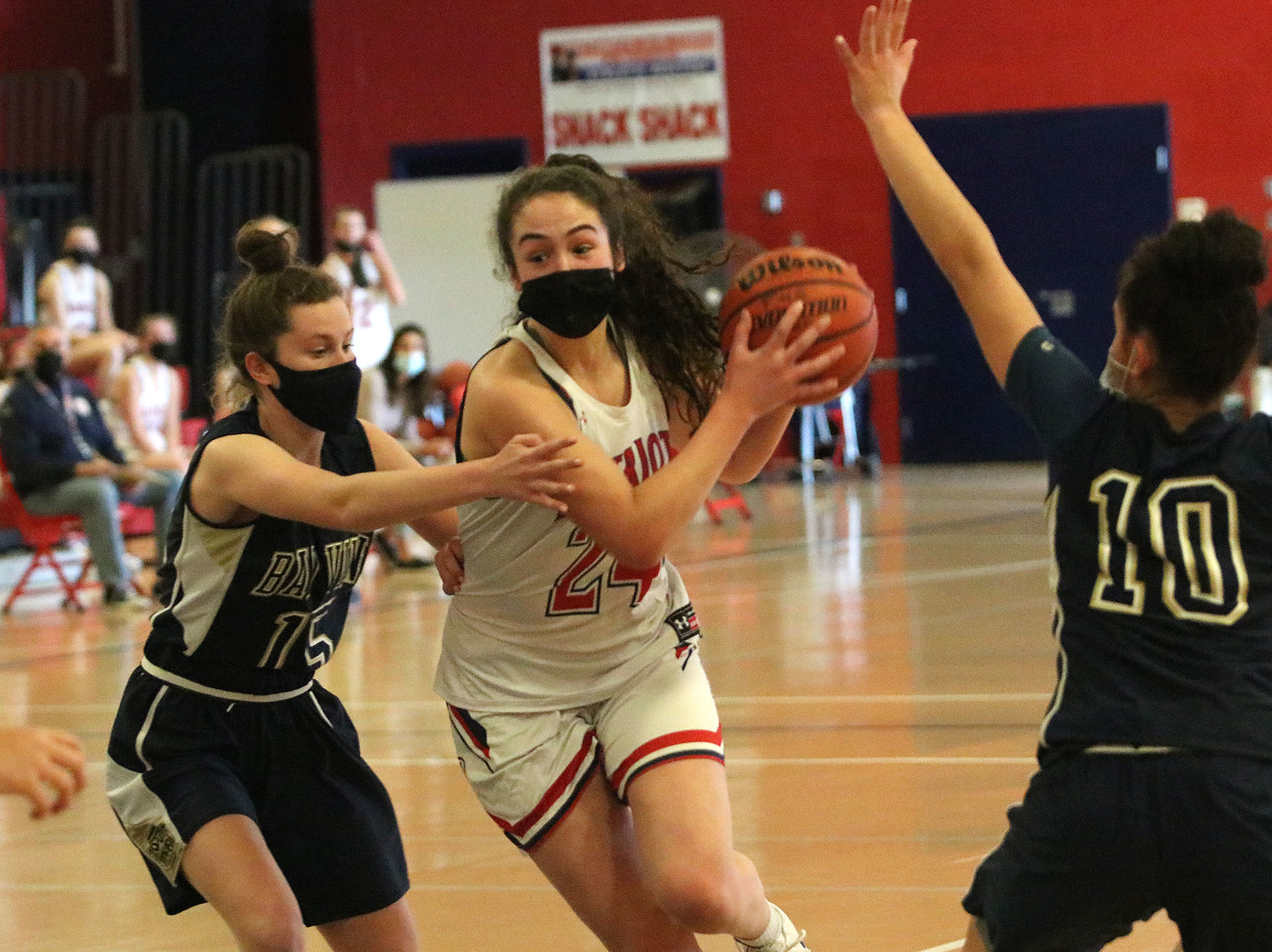 Patriots senior guard Grace Gesmondi drives the lane between a pair of Bay View defenders on her way to the basket Saturday. She was the Patriots’ high scorer, finishing with 11 points.
RICHARD W. DIONNE, JR. 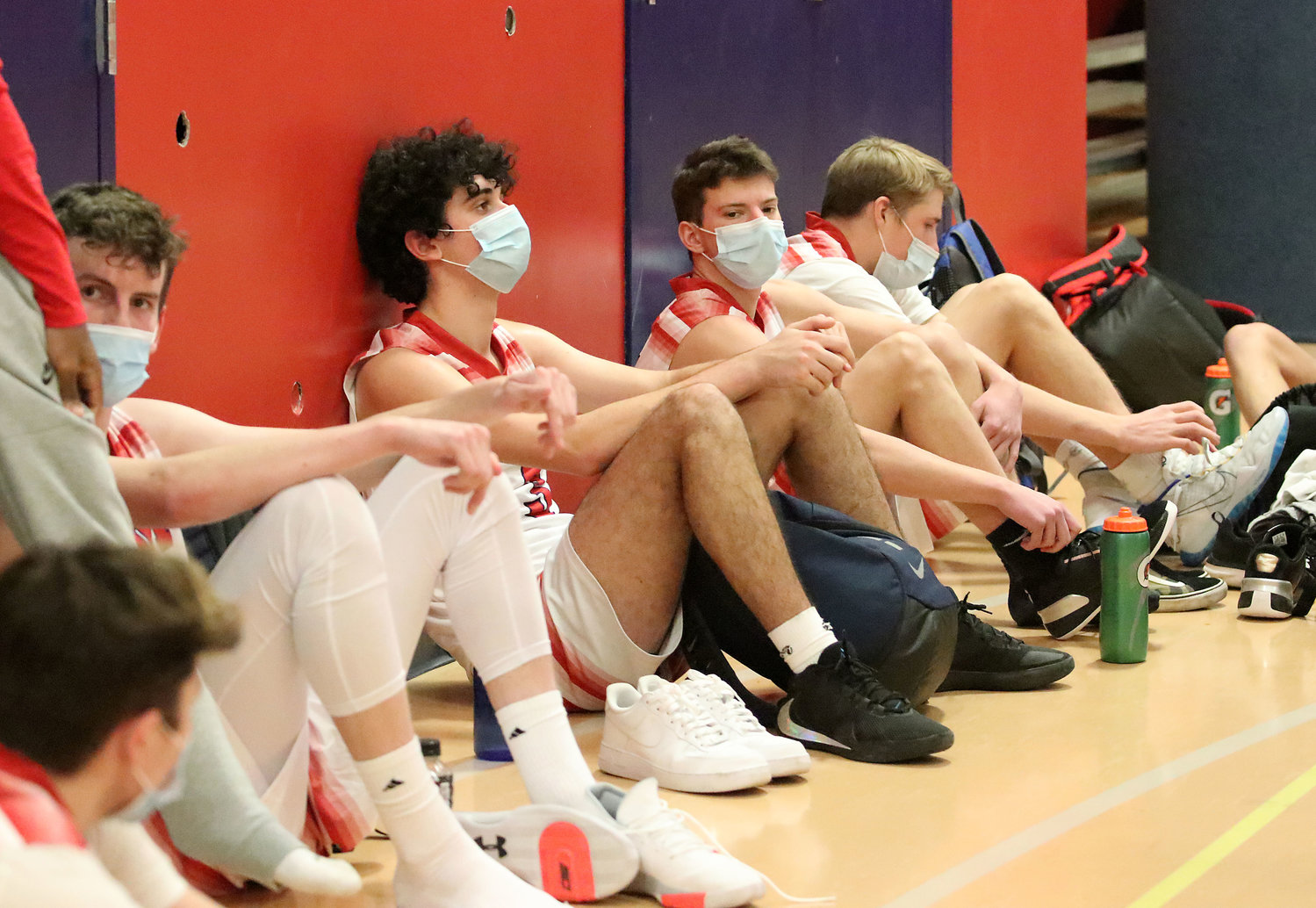 Members of the PHS boys’ varsity basketball team rest after defeating Chariho on Saturday. Running up and down the court with a mask on is grueling, one player said.
RICHARD W. DIONNE, JR. 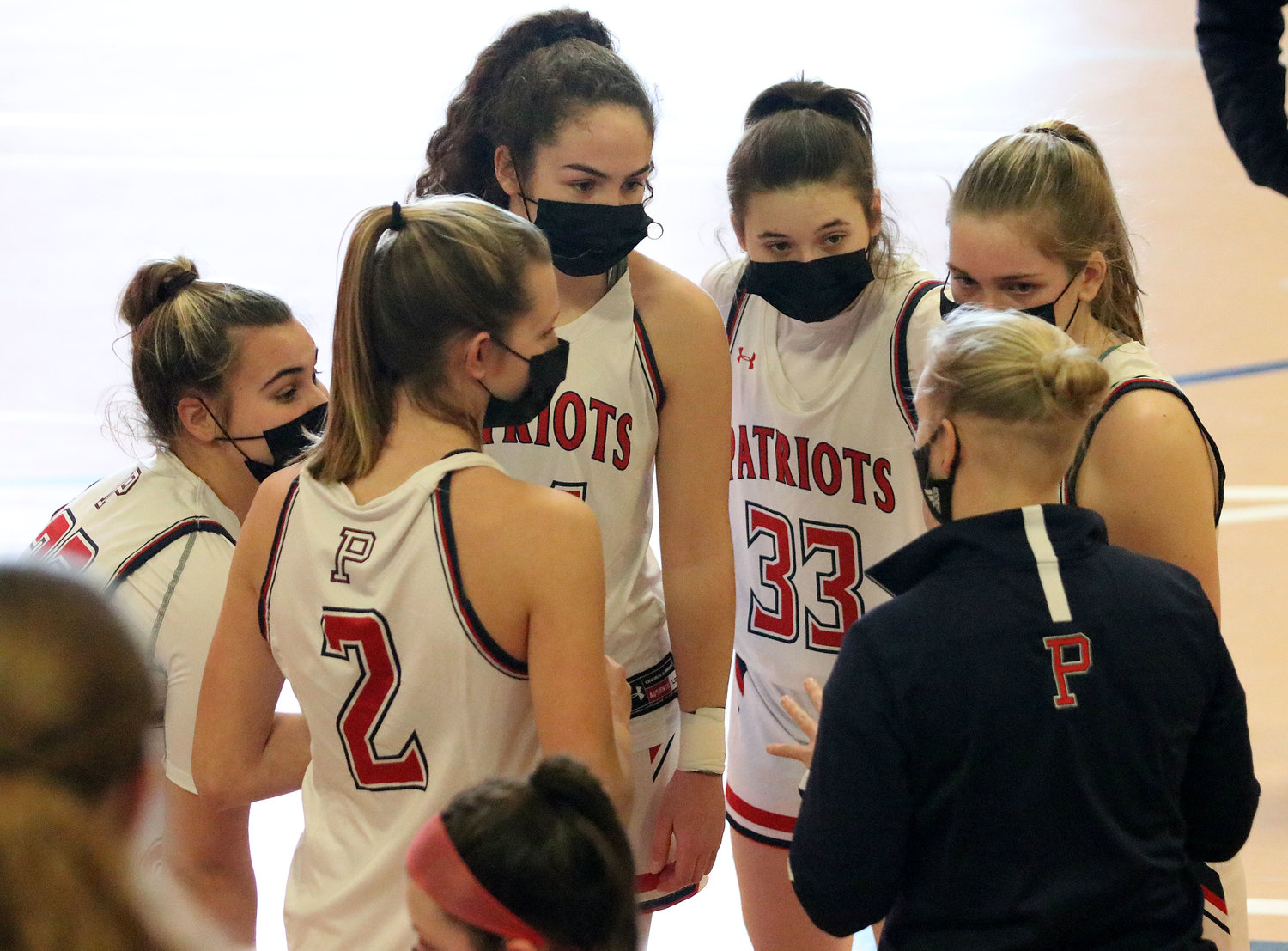 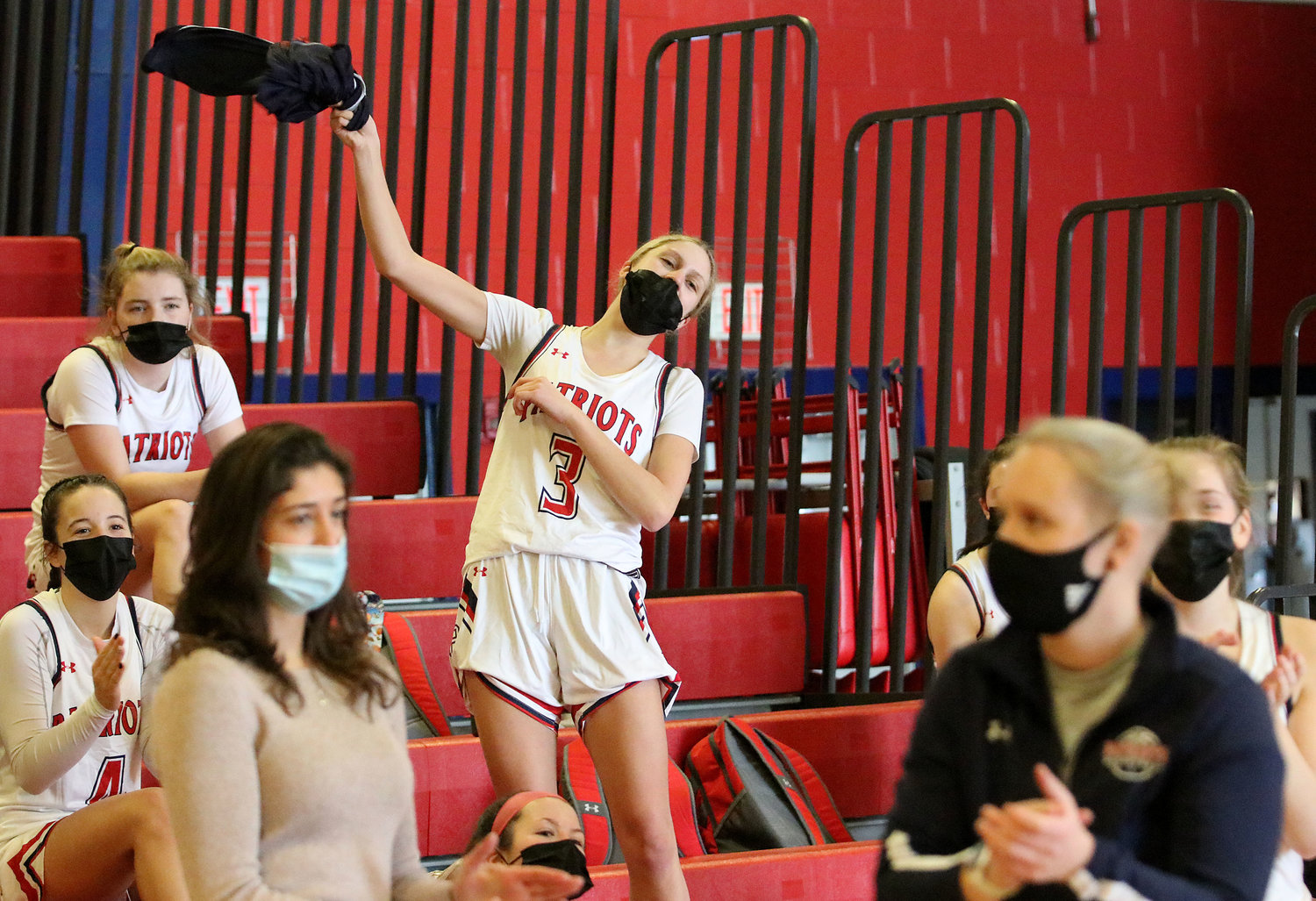 Portsmouth High’s Juliana DeComo waves a shirt while cheering on her teammates as they’re announced before the game against Bay View on Saturday.
RICHARD W. DIONNE, JR. 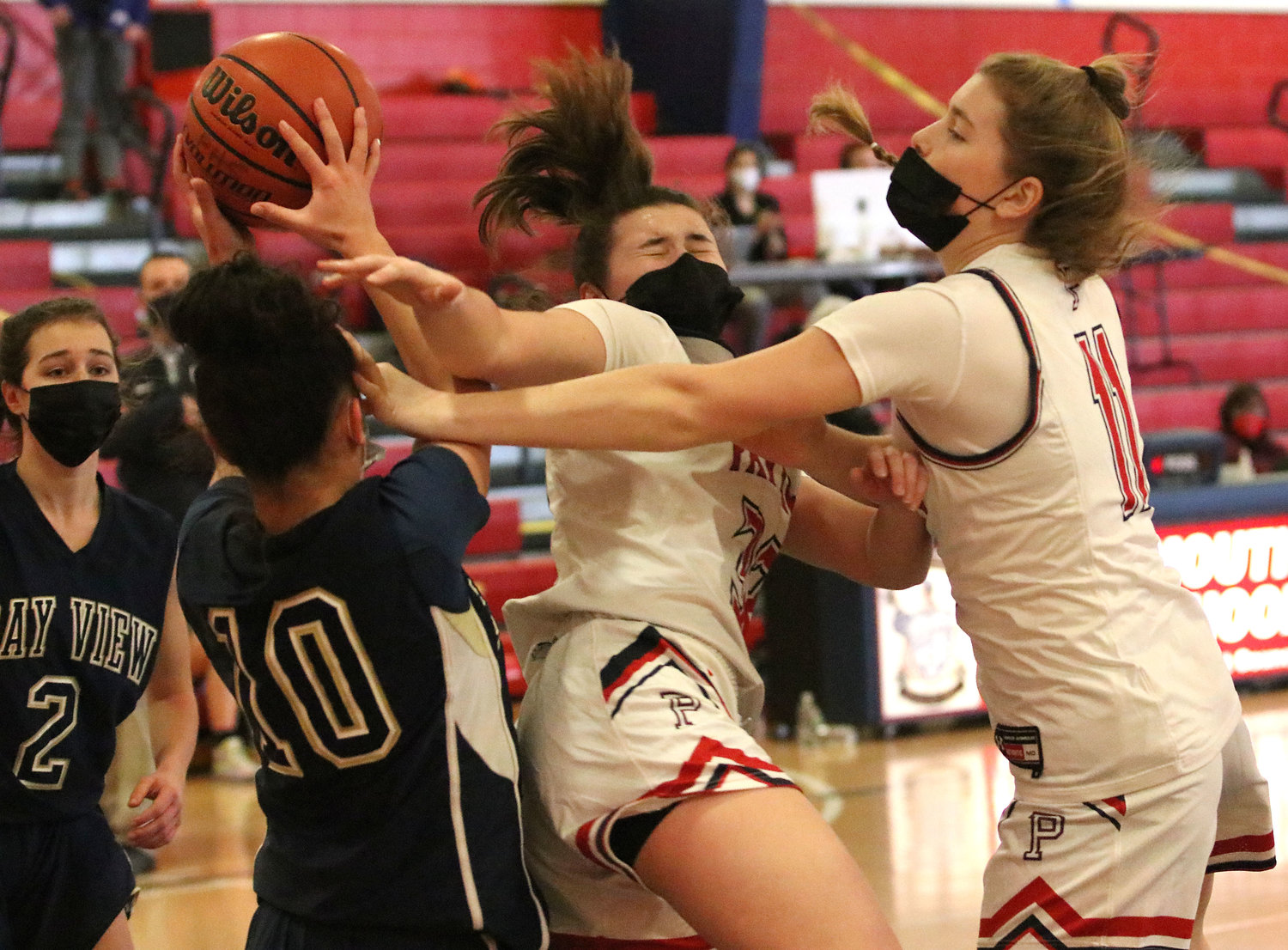 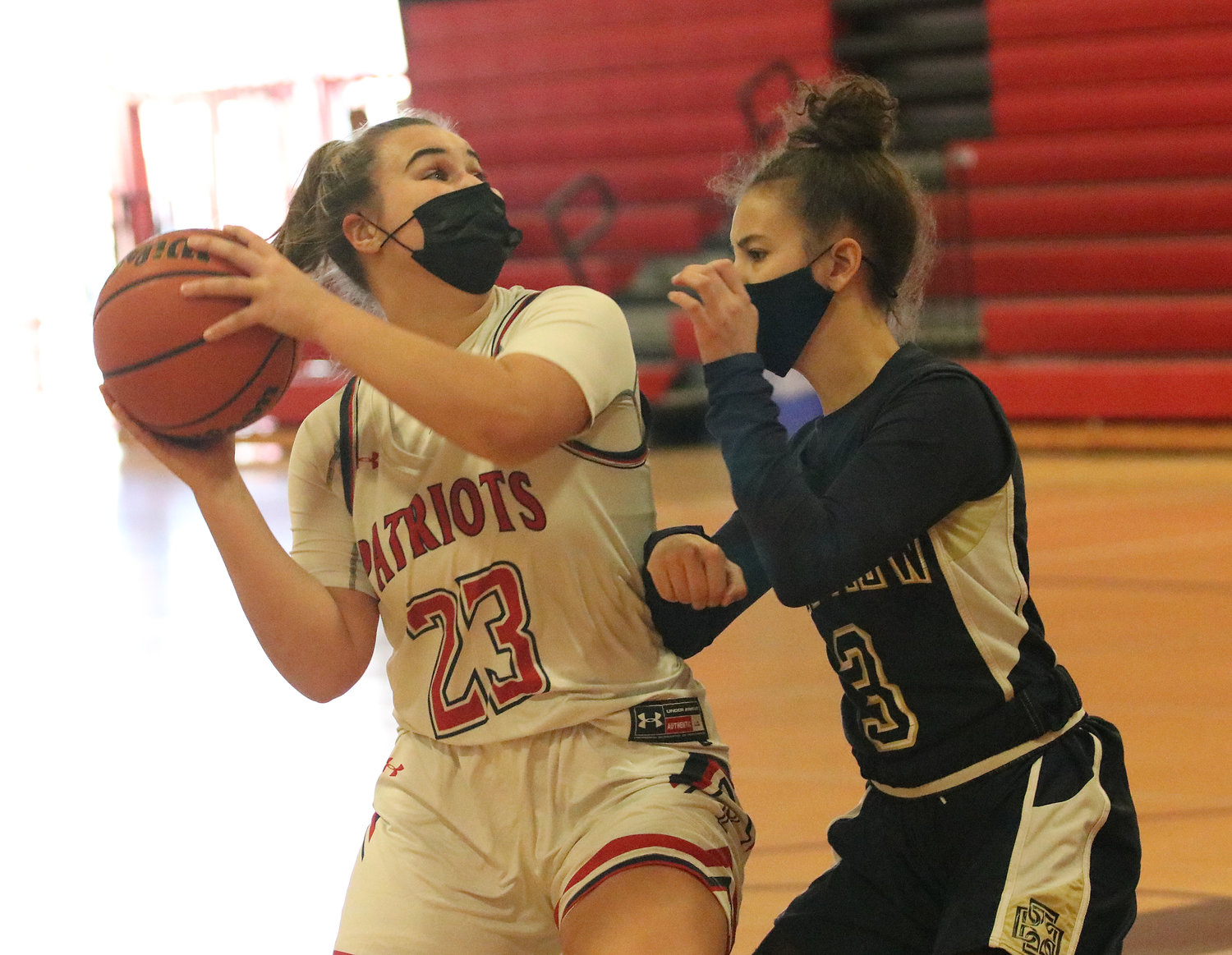 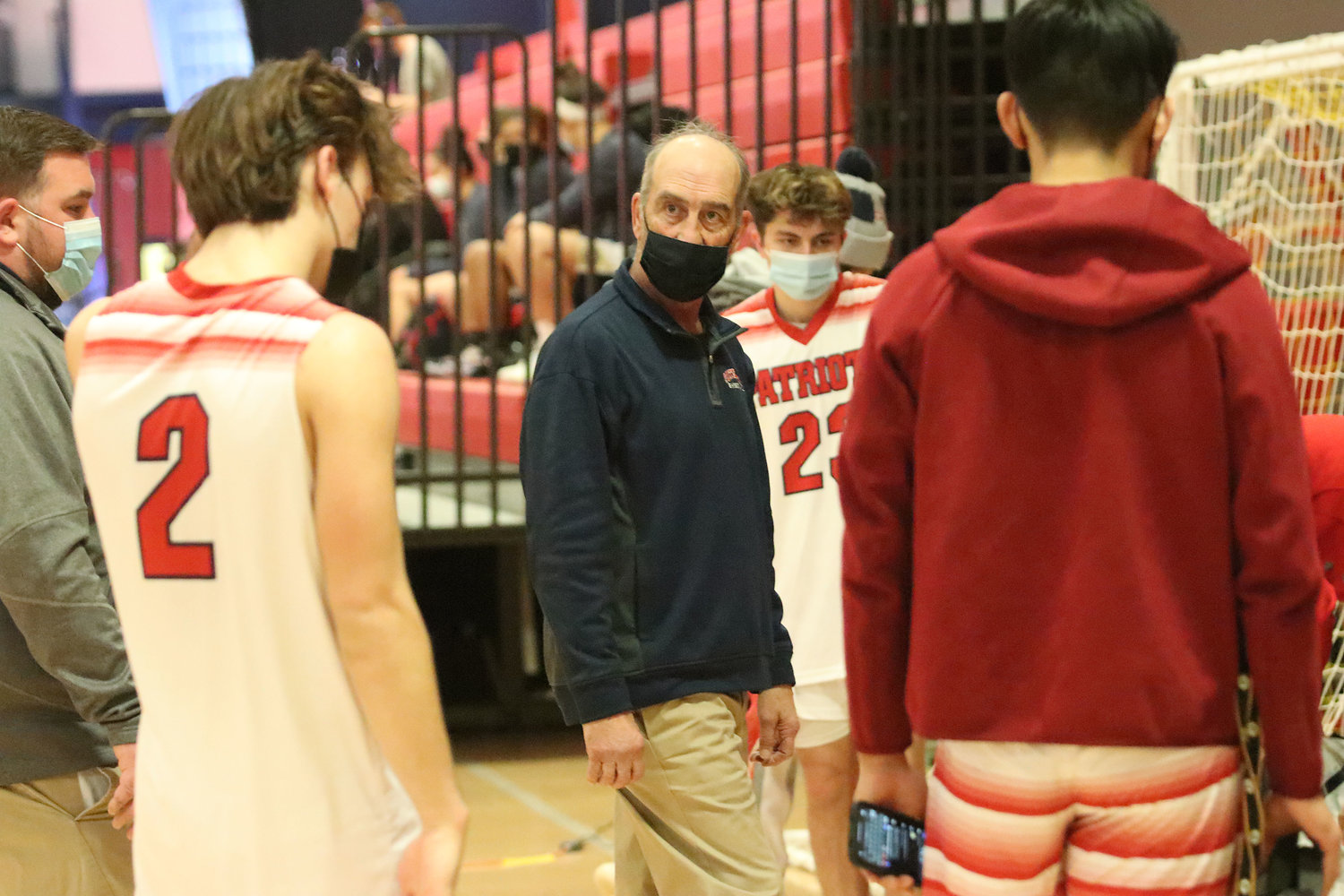 Joe Occhi, head coach of the Patriots boys’ varsity basketball team, meets with his players following their win Saturday in the PHS field house. “It’s a little bit fitting, I think, that we were the ones that closed this building in March and the ones to open it again now,” he said.
RICHARD W. DIONNE, JR. 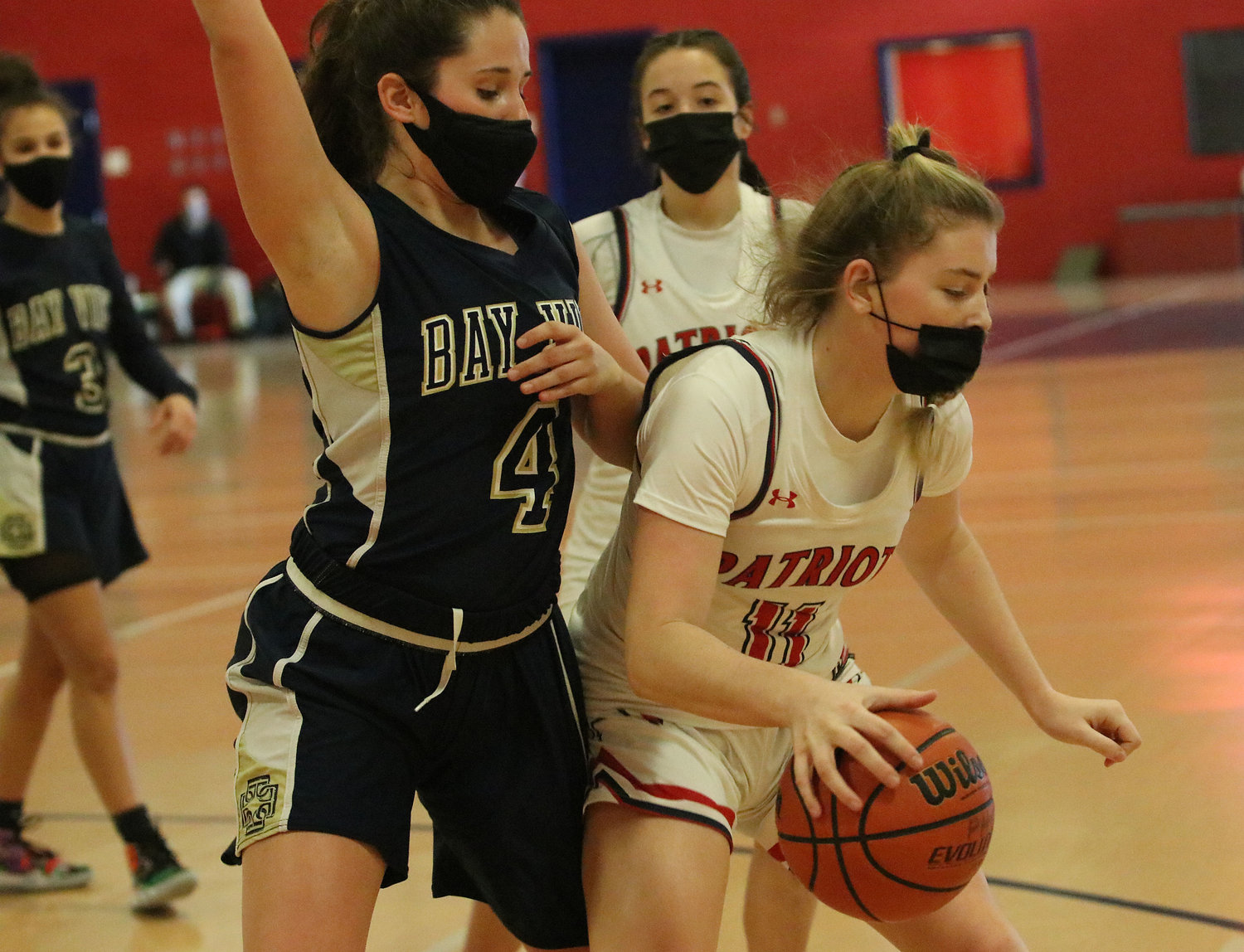 Patriots forward Maeve Tullson puts the ball on the floor in the offensive zone, with Olivia Durant looking on.
RICHARD W. DIONNE, JR. 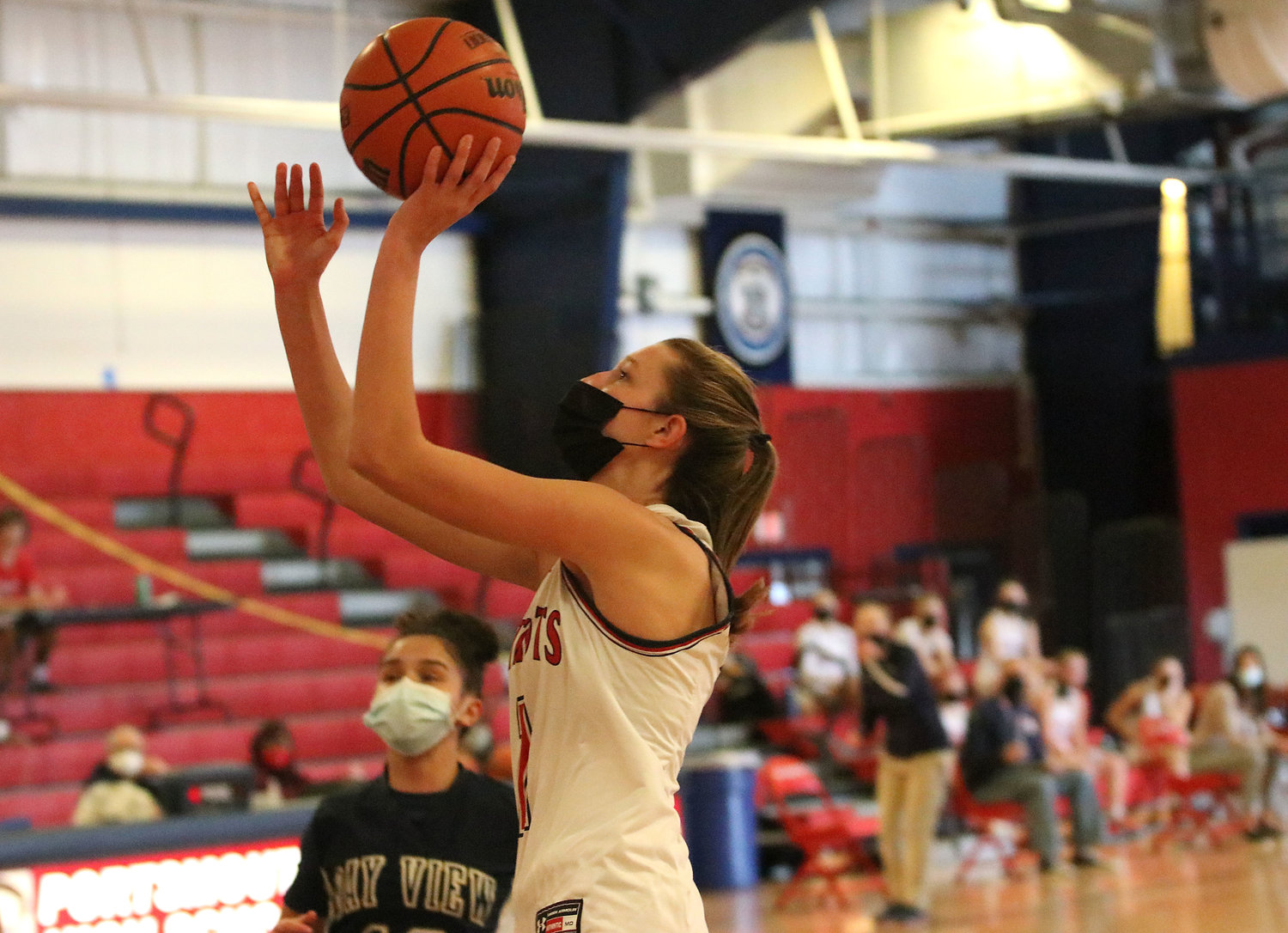 PORTSMOUTH — Getting back on the court was one of the best birthday gifts Emily Colicci could have asked for.

The Portsmouth High School senior co-captain of the girls’ varsity basketball team had just celebrated her 18th birthday the day before. On Saturday, she celebrated again — this time with her teammates after posting a 49-44 win over Bay View in the PHS field house.

The winter sports season, long delayed by COVID-19, finally kicked off last week. For Emily, it wasn’t altogether clear if she would ever shoot competitive high school hoops again.

“I didn’t think it was going to happen, to be honest, because the way things were going, it was all up and down and I had no idea,” she said. “But it feels really good, seeing that last year we got stopped in the middle of the playoffs, and we were on a roll.”

Last year, her squad made it to the Elite 8 in the state tournament after beating West Warwick on the road on March 12. But then the pandemic shut down the rest of the season for both the girls and the boys, who had also been on a roll.

Now, she and her teammates are looking to pick up where they left off.

“We’ve working as hard as possible,” Emily said. “I think we’re off to a really good start. I’m happy to be back with some new girls, too. The freshmen are really good.”

Added head coach Risha Pellegrino, “It feels pretty great and I think the girls can say that, too. It was a little hairy there for a moment; we weren’t sure if we were going to get on the court. But, just to be out here has been fantastic, and for the girls it’s brought a little bit of a sense of normalcy.”

The team looked rusty at times, but that’s not surprising since practices didn’t begin until Jan. 11, under guidance by the R.I. Interscholastic League (RIIL). But the team has responded well to the short schedule, said Ms. Pellegrino.

“This year we’ve had a real big focus on defense,” she said. “To me, that’s really what won the game for us today. We used to rely on outside shots and they really weren’t falling for us today, so the defense really came through. All of their hard work really showed today.”

Passing has also been a key focus this year. “We’ve been working on that as well — taking care of the ball and no easy turnovers. If we’re going to have one, it better be forced by the other defense,” she said.

Before the girls took the court, the boys’ varsity team defeated visiting Chariho, 50-44, in its season debut. During both matchups, there were fewer than 50 people total in the field house, which included players, coaches, referees, scorekeepers, school staff and students filming the games. No other spectators were allowed, and everyone — including the players — wore masks.

“It feels good being back, but it sucks wearing a mask,” co-captain Ben Hurd, a junior, said after the game. “I was gassed like after the second drive.”

As with the girls’ team, the boys’ offense was a little off, with many shots just a bit wide of the rim.

“We look pretty good; we just have to pick up our offense,” said Ben. “It seems like we always start off bad the first game of the season — for the past three years for me. But we’ll pick it up.”

Head coach Joe Occhi, who last fall was named RIIL Boys’ Basketball Coach of the Year after leading his team to a Division II title, agreed with that assessment.

“We didn’t start (practice) until the 11th, so we were a little late, but we’ll catch up,” he said. “We’ve just got some of our guys back; a couple of them were on quarantine. So we expected it to be a little ragged, and it was. Overall, we were happy with our defense. If we make our layups and make our free throws, I think it’s an entirely different game.”

Just “getting back out” on the court was the best part of Saturday’s game, Mr. Occhi said.

“It’s a little bit fitting, I think, that we were the ones that closed this building in March and the ones to open it again now,” he said.

He was referring to a game on March 12, 2020, when the Patriots held off a surging Shea team in a near-empty field house to advance to the Elite 8 in the state tourney.

Their next opponent would have been La Salle, but Gov. Gina Raimondo closed schools the following week and the RIIL canceled the remainder of all winter sports tournaments.

Mr. Occhi said he feels pretty good about this season.

“I think it’s just a lot of tweaking things,” he said. “The defense I was happy with; the effort was there. We’re very basic right now. These kids haven’t been on a basketball court in like 10 months.”

For the girls, Grace Gesmondi scored 11 points, followed by Emily Maito with 10.