PORTSMOUTH — With two weeks until the Nov. 2 special election that will ask voters to approve a $21.44 million bond to make health and safety improvements in all four school buildings, the … 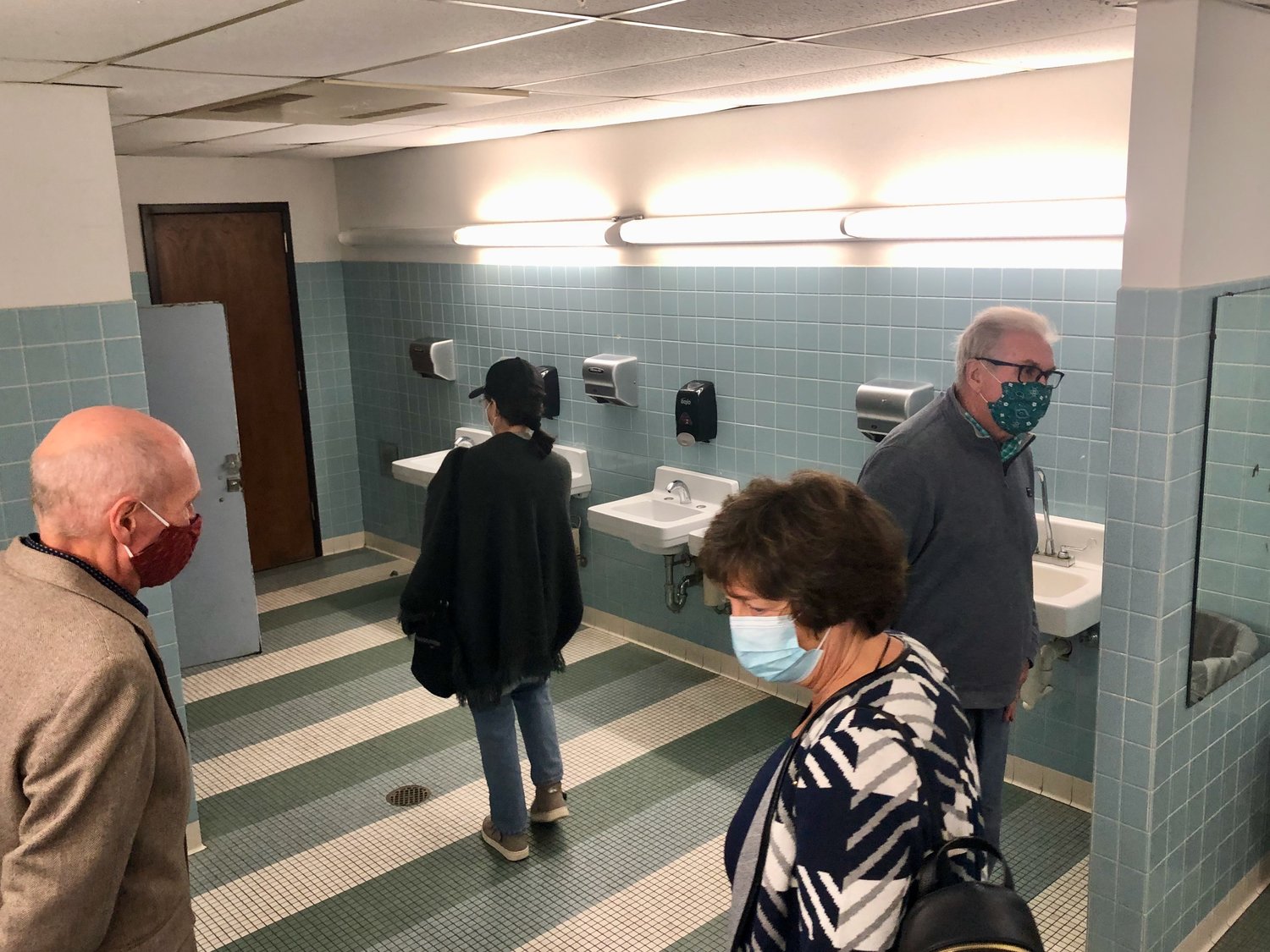 We think now is a critical time to make those (health and safety) improvements.”
Superintendent Thomas Kenworthy
By Jim McGaw

PORTSMOUTH — With two weeks until the Nov. 2 special election that will ask voters to approve a $21.44 million bond to make health and safety improvements in all four school buildings, the School Committee Monday night made its case before the public.

Very few turned out to hear it, however. Fewer than 20 people gathered in the Portsmouth Middle School library where the forum was held, and most all of them were either members of the School Committee, district staff members, or consultants on the project. Some questions, in fact, were asked by school board members based on residents’ comments they had read on social media.

Nevertheless, committee members and Superintendent Thomas Kenworthy plowed ahead with the forum, which was followed by a brief tour of one of the school’s bathrooms, the complete renovation of which is the main project being proposed at the middle school.

“We think now is a critical time to make those (health and safety) improvements,” Kenworthy said, noting that voter approval is the last step the district needs in order to apply for project approval from the R.I. Department of Education (RIDE).

There is a “time-limited opportunity” for the district to earn a 40-percent reimbursement on the project, which means that about $8.6 million would be returned to the Town of Portsmouth, with the actual project cost being about $12.9 million, he said.

State funding is available due to the $250 million statewide bond approved by voters in 2018. Each district has come up with its own projects; East Providence recently broke ground on a new $180 million high school, and Newport is getting ready to do the same.

Portsmouth, however, isn’t asking for such a large chunk of change from taxpayers, Kenworthy said. “We don’t need a new school at this time. It would be a great thing, but for a lot of reasons that doesn’t make much sense for us,” said the superintendent, who then ran down the numbers and how the money would be spent.

Of the $21.44 million, about $12.03 million (56 percent) will go toward improving air quality, which is particularly important during the pandemic, school officials said. The second biggest slice of the pie — $5.34 million (25 percent), is for improved accessibility through extensive renovation of student and staff bathrooms to bring them in line with American Disabilities Act (ADA) compliance.

“Hathaway is a two-story building that does not have an elevator,” Kenworthy said, adding that classrooms have to be moved around at times to accommodate students with disabilities. As for the bathrooms, “They’re well-maintained in some areas and they’re functioning, but they’re not state of the art … and will not last us another 20 years,” he said.

Another $1.7 million (8 percent) would go toward replacing the roof at Melville, which is approaching the end of its useful life. Another $1.44 million (7 percent) is for site safety improvements on school roads, sidewalks and parking spaces. Finally, about $922,000 (4 percent) is targeted for the removal of asbestos floor tiles and to refresh the interior finishes in the process.

“There is no limit on these things, in terms of cost. We’ve never had a bond that came in as advertised cost, and advertised design,” Fitzmorris said before noting the cost of building a new police station exceeded the $10 million bond that voters approved in 2016.

He also took issue with the district’s claims that the town’s debt service is decreasing over the next 20 years as other bonds are paid off, so an approved school bond won’t be such a tough burden for taxpayers. “We believe it will double the town debt,” said Fitzmorris, adding that figures presented by the district also assume there will be no new bonds in the near future.

Phillip Conte, president and CEO of StudioJAED, an architectural and engineering firm that’s been leading the project planning for the district, said the bathroom renovations involve a “comprehensive replacement” including roofing penetrations, new electrical distribution systems and sprinklers, and will ensure the schools have “adequate gender-neutral facilities.” Each bathroom will also be “airport style,” meaning the sinks will be placed near the entrance/exit so they’re visible from the hallway, allowing teachers to make sure there’s no “horseplay” and that hands are being properly washed, he said.

Chris Spiegel of Colliers Project Leaders, the project leader, agreed. “This is not a bathroom renovation that you do in your house where you get stuff from Home Depot,” he said, noting the bathrooms accommodate hundreds of students and will be designed to last many years.

Conte also addressed Fitzmorris’s concerns about oversight of the project, saying that not only is the process very vigorous, RIDE is invested in the project. “They want to protect their 40 percent, so there’s a lot of oversight,” he said.

Emily Copeland, who chairs the School Committee, addressed a question that has popped up on social media: Can these projects be done through the district’s regular capital funding, as opposed to the bond?

No, answered Chris Diluro, the district’s director of finance and administration. The amount of capital funding the schools receive from the town varies from about $400,000 to $600,000, he said. “Doing the math on that, it would take two decades to get this work done” without borrowing money, said Diluro.

Committee member Fred Faerber III agreed, saying the district could never accomplish a major renovation project like this without taking advantage of the state’s high reimbursement rates. “This is a generational opportunity for us,” he said.

Another resident, Steve Johnson of Wapping Road, also said it made more financial sense for the district to get the work done now, rather than in piecemeal over several years. Not only would the schools be receiving an anticipated “40-percent reimbursement paid by others” if the bond were approved, the district could also save money by locking into a borrowing rate by this winter, he said.

“The sooner we do it, the less expensive it will be,” Johnson said.

Diluro agreed. “Rates probably have never been lower in our lifetime,” he said, adding the project could lock into a 3.5-percent rate over many years.

Johnson also questioned the plan for upgrading the schools’ HVAC systems, but not because he felt it was too expensive. As we deal with a pandemic and learn more about respiratory health issues in public buildings, Johnson asked, is the district doing everything it can to avoid “sick” buildings?

“Are we sure we’ve covered everything that is doable from a scientific perspective to increase the air quality … in our school buildings? Are we spending enough?” he asked.

Kenworthy said the district has run every possible air quality test imaginable in its school buildings, and while a complete overhaul of every HVAC system was not proposed, the two systems in greatest need of improvements — at Hathaway and Melville — were chosen.

Conte added the district has done a good job of keeping the buildings “tight” through roof replacements and other improvements over the years.