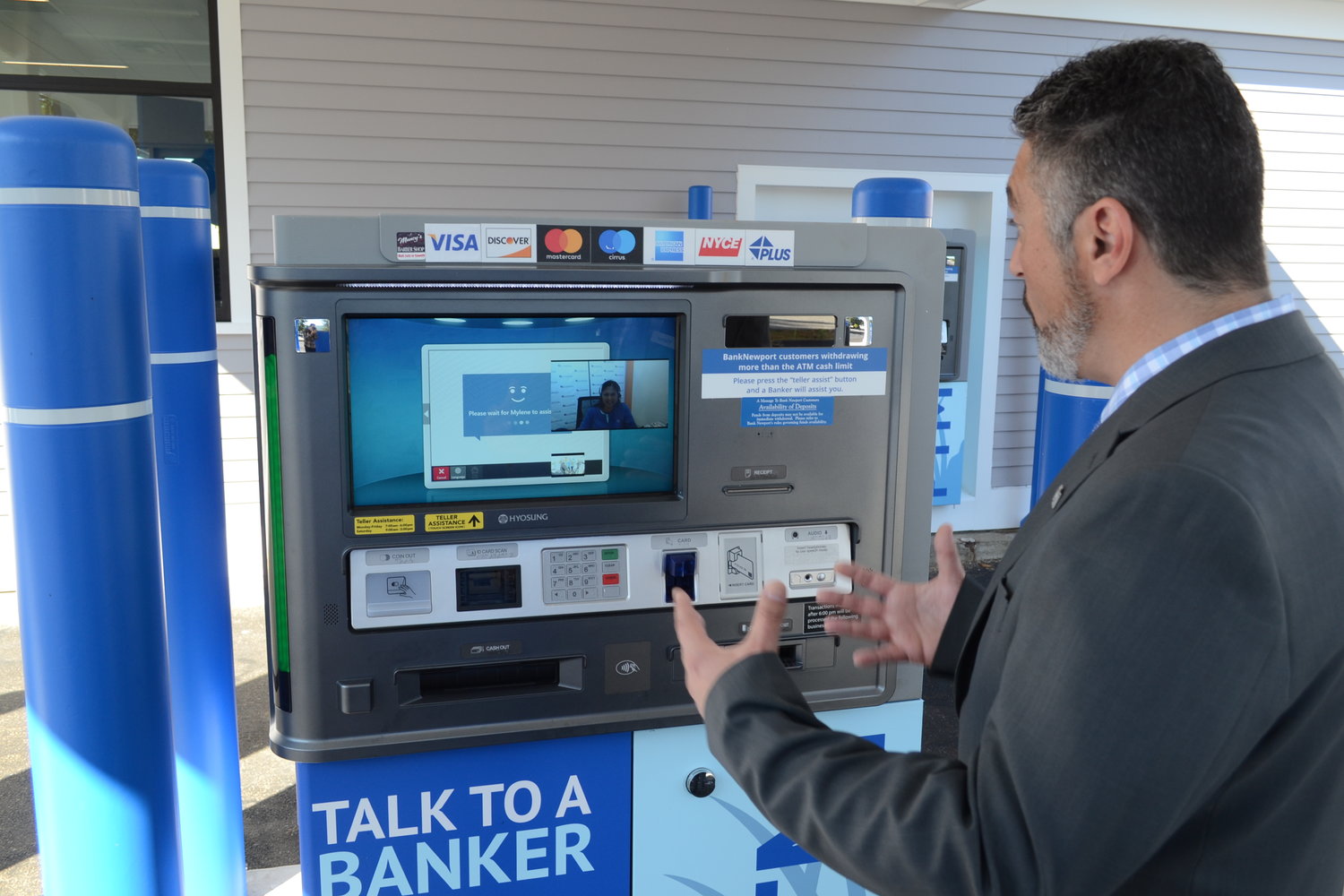 Victor Correia, Vice President and branch sales manager of BankNewport’s Warren location, speaks with Myleen from the bank’s Middletown call center via one of the bank’s new PTMs (personal teller machines), which performs many functions above and beyond a traditional drive-up ATM.
Ethan Hartley 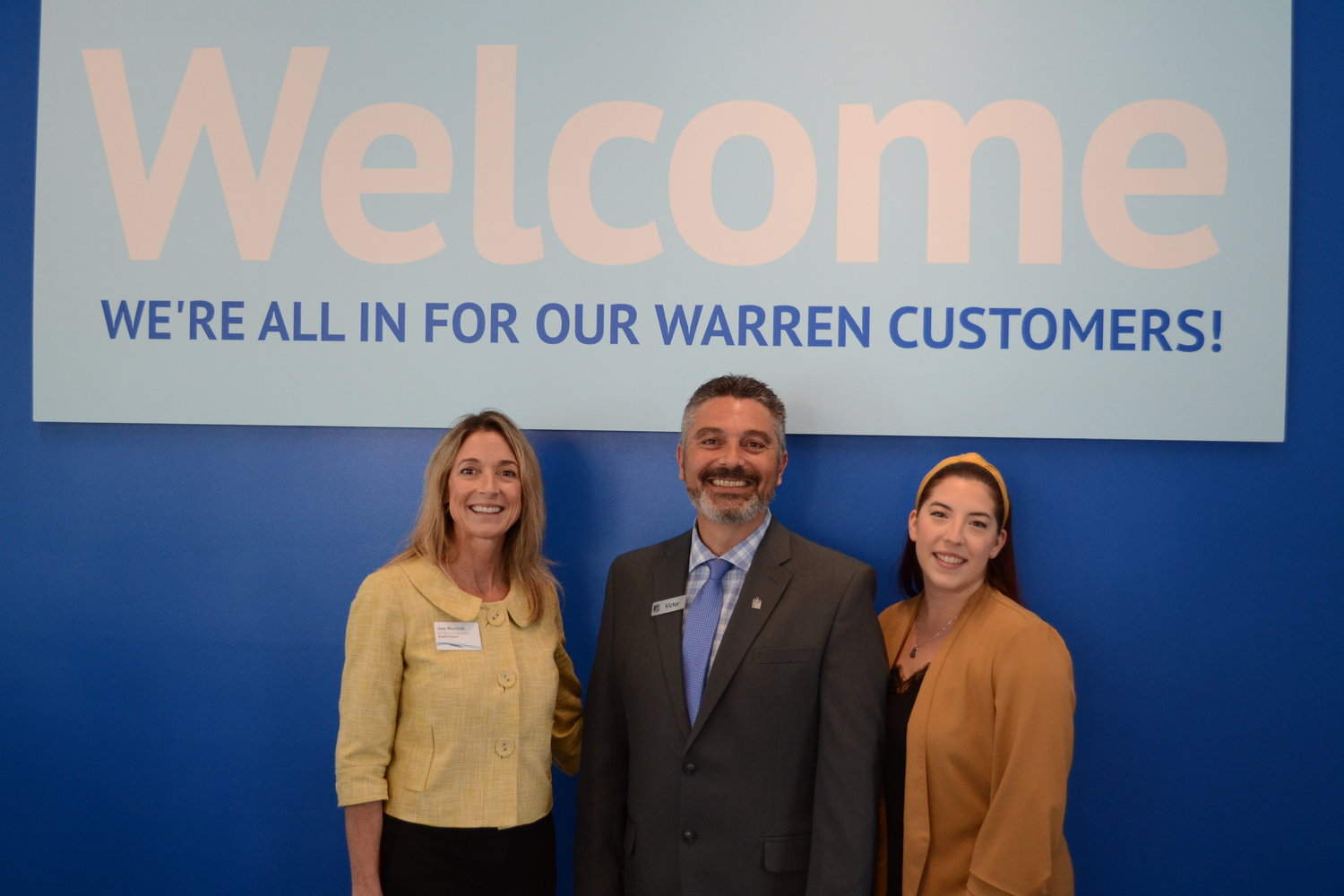 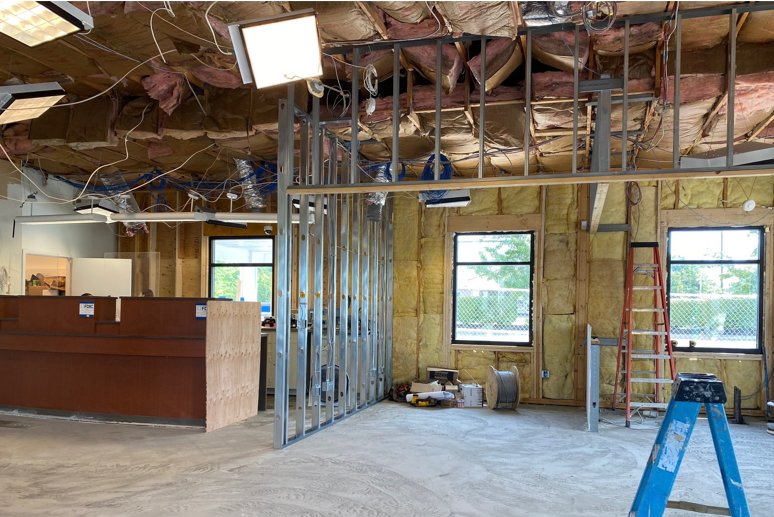 The reconstruction took the building down to studs, and was completed ahead of schedule.
Submitted photo
Previous Next
Posted Thursday, October 14, 2021 10:46 am
By Ethan Hartley

Personal slices of pie, coffee, and free merch awaited customers walking into the revamped branch of BankNewport, located at 323 Market St. in Warren, as the bank celebrated a grand reopening week following a five-month period of renovation.

The Warren branch, originally built in 1998, now features an open concept interior with lots of large glass windows to allow light to pour in, with multiple desks sprinkled throughout to encourage active communication between bankers and patrons — a purposeful move made by the bank in the hopes of creating a more personalized experience.

“We can do everything that we did before but in a bigger, more relaxed, more inviting space,” said Amy Riccitelli, Director of Retail Sales for BankNewport. “It helps facilitate a conversation, and people seem to really appreciate that.”

In a short span of time, regular customers were cycling quickly through the bank taking care of their various needs, all saying kind words to the staff and praising the new look.

Victor Correia, Vice President and branch sales manager for the Warren location, said that the bank had retained all of its existing staff since before the pandemic, and that the bankers in the location were all from the surrounding Rhode Island area. In addition to the Warren branch, there are branches in Barrington and Bristol to serve the East Bay and surrounding region. The bank has 17 total branches in Rhode Island, accounting for over $2 billion in total assets.

Correia said that the bank has maintained a strong community presence through donation drives and through individual branch events, such as one they recently held at Eskimo King, where the bank paid for peoples’ ice cream during a two-hour event.

“We’re beyond thrilled at the growth we’ve seen in this community,” he said. “It’s also important for us to be a good business neighbor. In the East Bay, it’s all-in. Everyone wants to see each other succeed.

The future of drive-through banking is now on display at the Market Street branch, with two personal teller machines (PTMs) now operating for customers’ on-the-go banking needs. BankNewport was the first bank in Rhode Island to feature these new machines.

Correia showed how pressing a button on the on-screen menu connected a customer to the bank’s call center in Middletown, where a remote banker can help answer questions and provide services. The machines themselves do work above and beyond a traditional ATM, such as allowing you to conduct banking business even if you’ve lost or forgotten your debit card (they allow you to scan your driver’s license). The machine also enable the user to deposit and cash checks right from their vehicle.

Correia said this expanded service could come in handy if somebody noticed fraudulent behavior in the morning on their checking account. While they’d have to wait to visit a branch in person to clear up the charges, they could at least have peace of mind by freezing their account via the convenience of the PTM before the bank was open.

And to answer the question probably on a few peoples’ minds, no, the PTMs are not part of a plan to phase out human bankers from employment. Correia said that the machines have replaced no in-person banking jobs, and they have no plans to do so in the future.