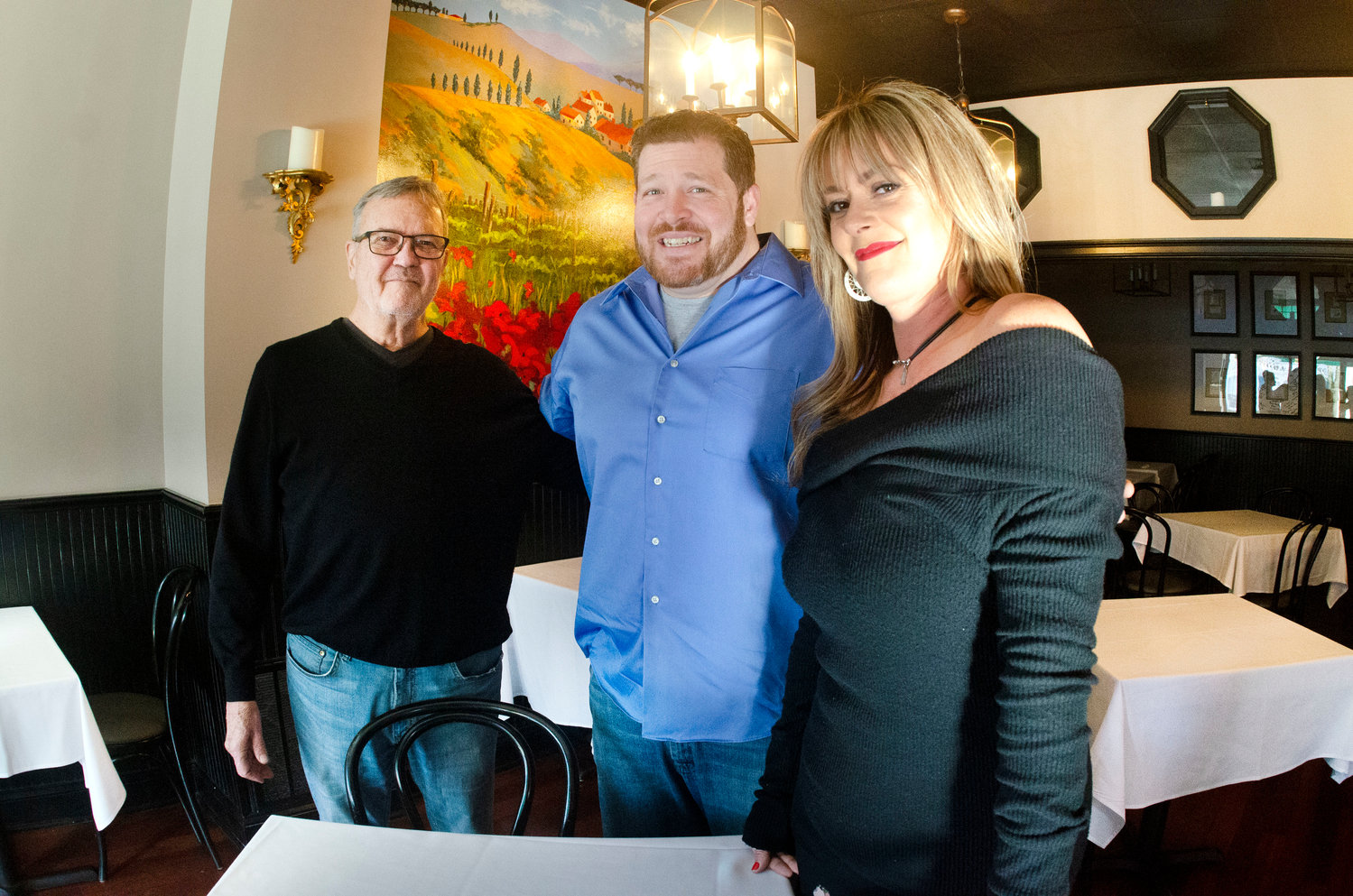 After 20 years in business, Bob Vanderhoof (l) has sold Roberto’s to Richie Corrente, proprietor of the Portside Tavern. Neeley Pires (r), who has managed at both establishments, will return to run day-to-day operations at Roberto’s.
Richard W. Dionne Jr.
Posted Thursday, November 18, 2021 3:56 pm
By Christy Nadalin

As 2021 dawned on Roberto’s 20th anniversary in business, the highly-regarded Northern Italian restaurant enjoyed a solid reputation and devoted regulars, and owner Bob Vanderhoof was breathing a sigh of relief that his beloved business had survived the pandemic. So the restaurant’s seemingly abrupt closure on Oct. 31 caught the community by surprise, leaving many to wonder what went wrong.

As it turns out, nothing went wrong — in fact, everything is going right.

Last Tuesday, Nov. 9, Vanderhoof sold Roberto’s to Richie Corrente of the Portside Tavern. Neeley Pires, Corrente’s current employee and former Roberto’s manager, will be returning to Roberto’s to handle day-to-day operations.
“I always said, call when you are ready to sell, and a few weeks ago, he called,” said Corrente.

“I don’t know what I’m going to do in the mornings anymore, but it was time,” said Vanderhoof. “I’m still running around like a chicken with my head cut off….there’s just so much to do to turn it over to Richie.”

A young and fit septuagenarian, Vanderhoof is a father of two and grandfather of six, and he’s been thinking about stepping back to spend more time with family for a couple of years now.

“I couldn’t bring myself to do it. I love this place, its been my life for 20 years. The staff is like family, Ali (Lizotte) and Jen (Luther) have been here since we opened.….when I told my son I finally pulled the trigger (on the sale) he said good, because otherwise, I would never retire.”

For Vanderhoof, the last straw was the staffing troubles that have plagued restaurants since the post-lockdown reopening. “I said, ‘I’m done’, and I called Richie. It was that easy.”

“We worked out a price that was fair. I think Richie is happier than I am with the price,” laughed Vanderhoof. “But that’s okay, that’s alright.”

Neeley Pires has long been a key player in both restaurants’ operations. “Neeley managed the place for 8 years,” said Vanderhoof. “She was my heart and soul.” Though Pires went to work for Corrente after he opened Portside, she and Vanderhoof remained close.

“I was here for a while and I felt there were things I still wanted and needed to learn in a different atmosphere, and I got that there. But I learned a lot here from my good friend Bob,” said Pires. “I love this place. My heart is here.”

“She knows it inside and out so it was natural for her to come back and run it for Richie,” said Vanderhoof.

No drastic changes in store
“This is one of my favorite places in town so I’m not changing much,” said Corrente, who held his wedding rehearsal dinner at Roberto’s. “It’s been around for 20 years and that doesn’t happen by accident. That said, a fresh coat of paint is a fresh coat of paint, so there might be some of that.”

Likewise, expect the menu to continue to feature the same reliably delicious Italian cuisine.
“We’ll take off a couple of items, bring back a couple from past menus, and add a couple to make it our own,” said Corrente. He hopes to open in 4-6 weeks, but is clear that if it doesn’t happen until after the new year, so be it."
Corrente, who plans to spend a few weeks getting the back of house in order before returning to his primary responsibility at Portside, would rather do the transition right, than rush it.

Everyone wins
By all accounts, this sale is a win for everyone — and testimony to what can happen when business owners view each other as collaborators, rather than competitors. Vanderhoof gets to vacation (something he hasn’t done in years) before returning to his favorite stool at the corner of Roberto’s bar as a welcome guest. Pires gets to go home again, Corrente adds to his portfolio of successful ventures, and Roberto’s regulars don’t have to say goodbye to a longtime favorite.

“Sure, it’s a big risk, taking on another restaurant out of my comfort zone. Going from Aidan’s to Portside to here, fine dining is a different atmosphere,” said Corrente. “But it’s also familiar. Neeley was bartending the very first day I ever waited tables at the old (Judge Roy) Bean. And Bob’s been a mentor to me for years. I used to come over after a Tuesday shift at Aidan’s, have a glass of wine and we’d talk. He gave me good advice when I opened Portside. He had confidence in me.”

“It was important that Roberto’s went to people he trusts. I wouldn’t do this without Neeley; we both have a real respect for this place.”

For Vanderhoof, the feeling is mutual. “I would not have trusted anyone else to use the name Roberto’s, but with Richie and Neeley I feel completely comfortable.
“It will be in great hands.”