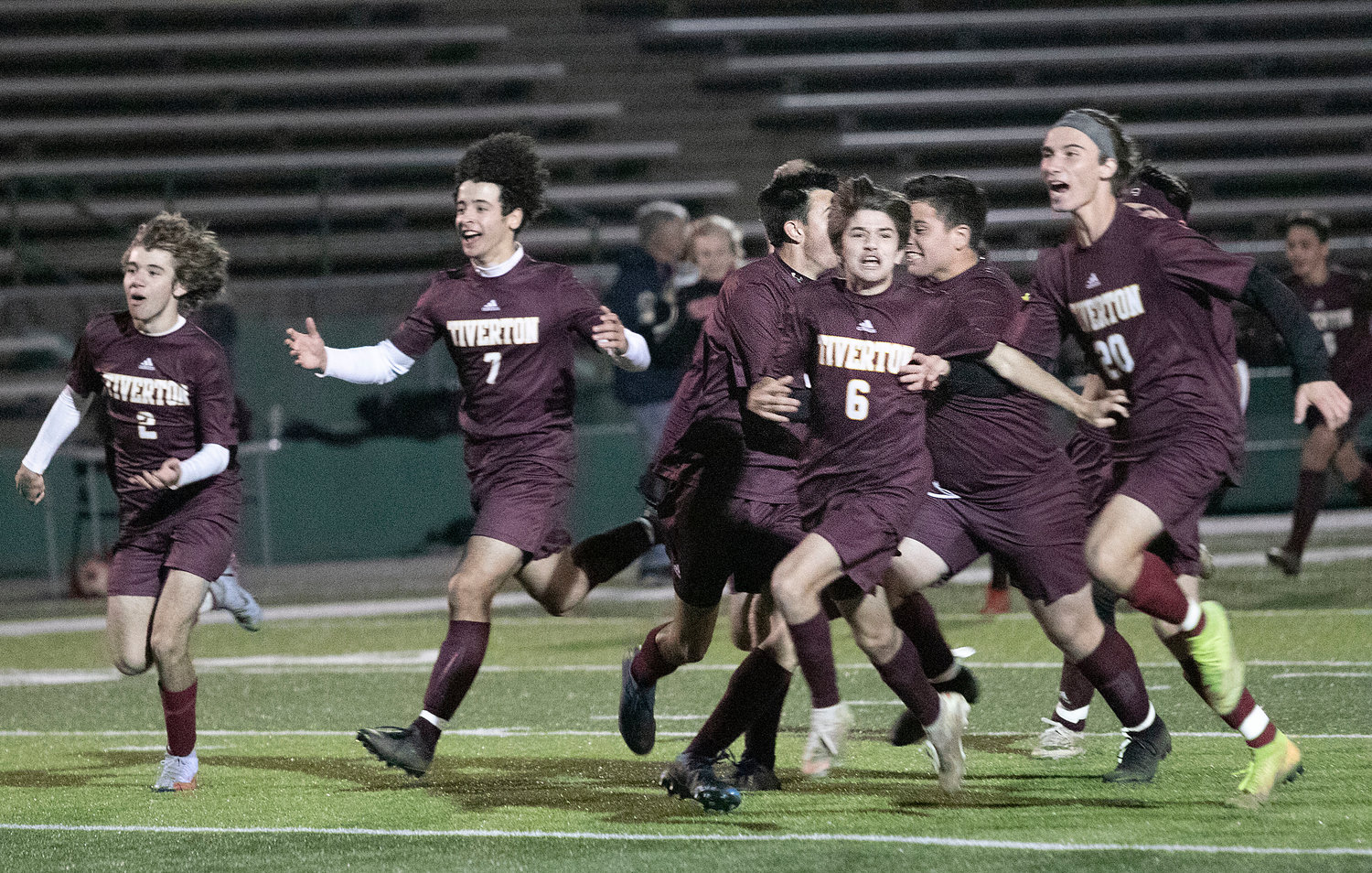 The Tigers run out onto the field after securing their victory in the state championship game.
RICHARD W. DIONNE JR.
Posted Wednesday, November 17, 2021 11:28 am
By Jen Campisi

The Tiverton boys’ soccer team closed out their season undefeated (18-0) at the state championship game against Narragansett High School Sunday evening at Cranston Stadium, beating their last opponent 3-2. The game remained scoreless through both halves and two overtime periods, but finally resulted in a Tigers' victory following a penalty kick shootout.

“I can’t believe it,” said goalkeeper Nathaniel Sama. “It’s the first time in history we’ve ever done this and it just feels so good.”

Sama, a junior, made a big save in the second overtime that carried the team into the shootout.

“As goalie, going into penalty kicks, it’s 50-50. It’s either left or right,” Sama said. “It was pretty exciting. You don’t get that very often.”

Ball possession was ruled by Narragansett for the majority of the game, though the momentum shifted approximately 20 minutes into the first half, as Tiverton began creating more chances to score. However, most shots were off-goal, leaving both goalies to dominate the game in terms of saves.

“Nate was on fire,” said Coach Tom Murray. “I told my kids, if we’re going into [penalty kicks], I’ll pick my goalie any time of the day.”

Luke DelDeo, the team’s captain, had the opportunity to raise the plaque ceremoniously at the conclusion of the game.

“I know it’s just a piece of wood, but it means so much more to us and this team,” DelDeo said. “We worked for this, we really worked for this. It feels amazing.”

Tigers fans in attendance brought the energy to the bleachers with horns and noisemakers, all whilst adorned in maroon and gold. The roaring cheers from the crowd that made the trip to Cranston certainly boosted the players’ attitudes.

“The support is amazing,” said DelDeo. “Even in years past, we’ve never really seen support like this. It’s been unreal, and for them to come over all the way down to Cranston and support us. They’ve been to pretty much every single home game and even away games, so that’s very important. It definitely does not go unnoticed.”

“We won it for these kids today, but we also won it for the seniors last year, and a lot of them were in the stands today,” said Murray.

“We did not want it to come down to [penalty kicks], because both teams had chances,” said DelDeo. “We were lucky enough to come out on top.”

The boys’ versatility allowed younger teammates to step up, including many freshmen who will be key players in coming seasons.

Juniors Alex Nimiroski, Logan Bouchard, Brady Oliveira, and Connor Nobrega, amongst others, will find themselves in the spotlight as seniors on the field next fall.

“I’m happy for these kids, they deserve it, and we worked hard to get there,” Murray commented. “We worked our butts off since the first week of August.”

“Not losing a game last year in a shortened season, and then this year, it’s just an amazing way to go out,” said DelDeo. “I love this team, I love these guys, and we did that as a team effort right there. It feels great.”