Walk into the East Bay Dive Shop, located just off the town’s main drag at 8 Church St. in Warren, and you’re likely to encounter at least two eager and friendly faces — Kenzie, a … 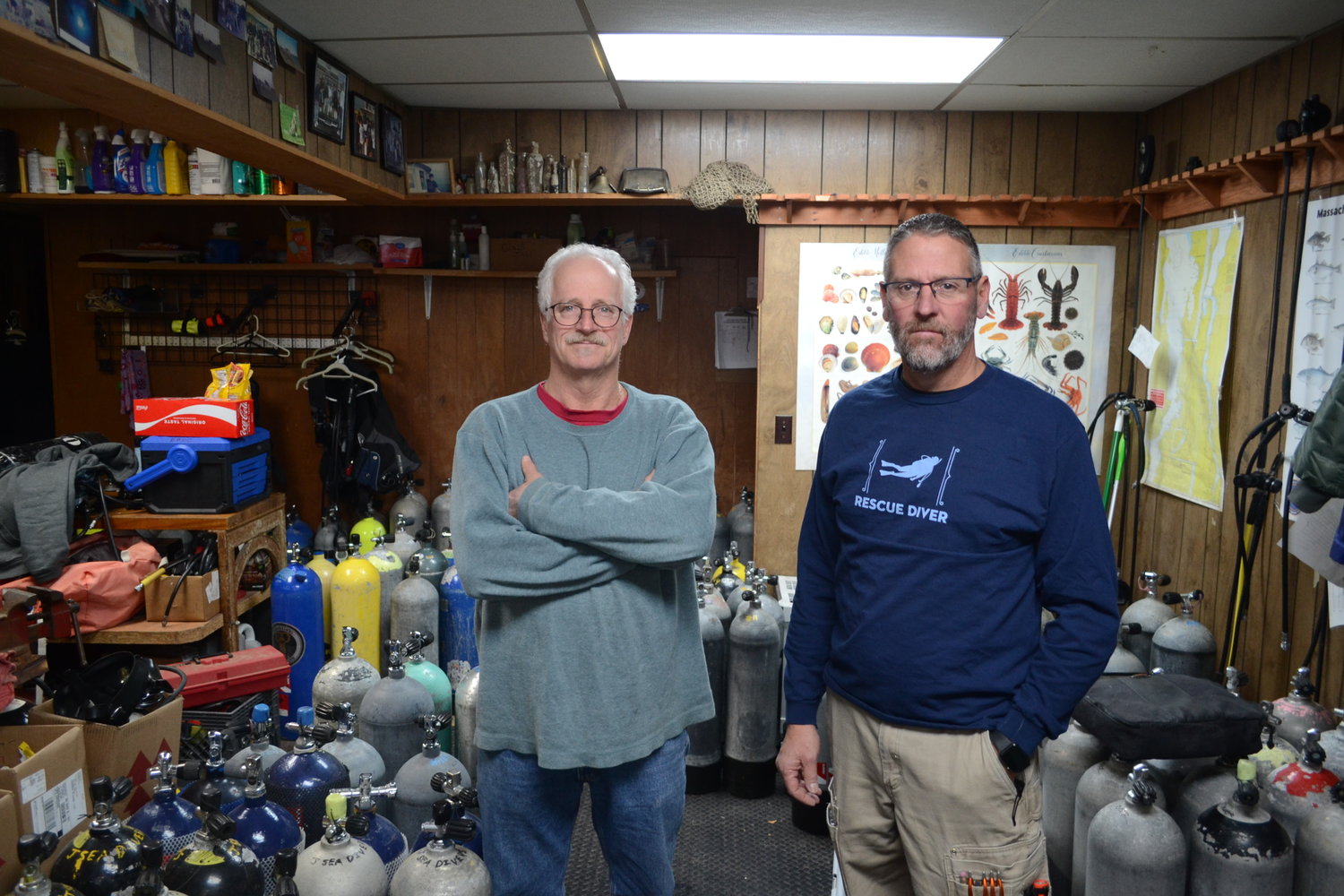 David Labrecque, founder and long-time owner of the East Bay Dive Shop, and Kevin Quinlan, who recently purchased the shop from Labrecque, inside the shop’s equipment storage area on Friday.
Ethan Hartley 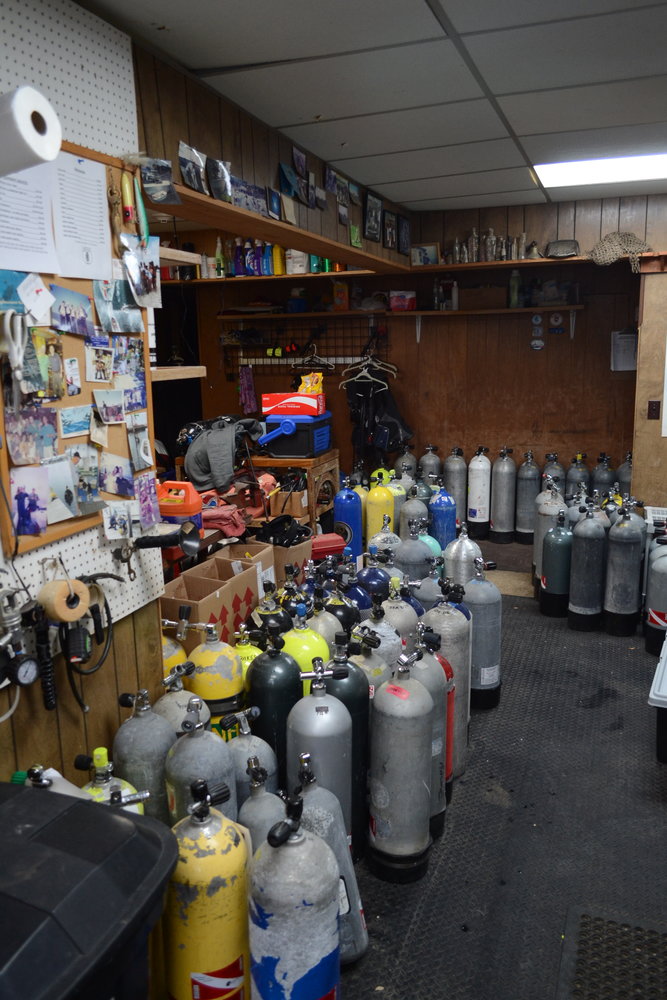 Various tanks and equipment wait to be serviced at the East Bay Dive Shop.
Ethan Hartley 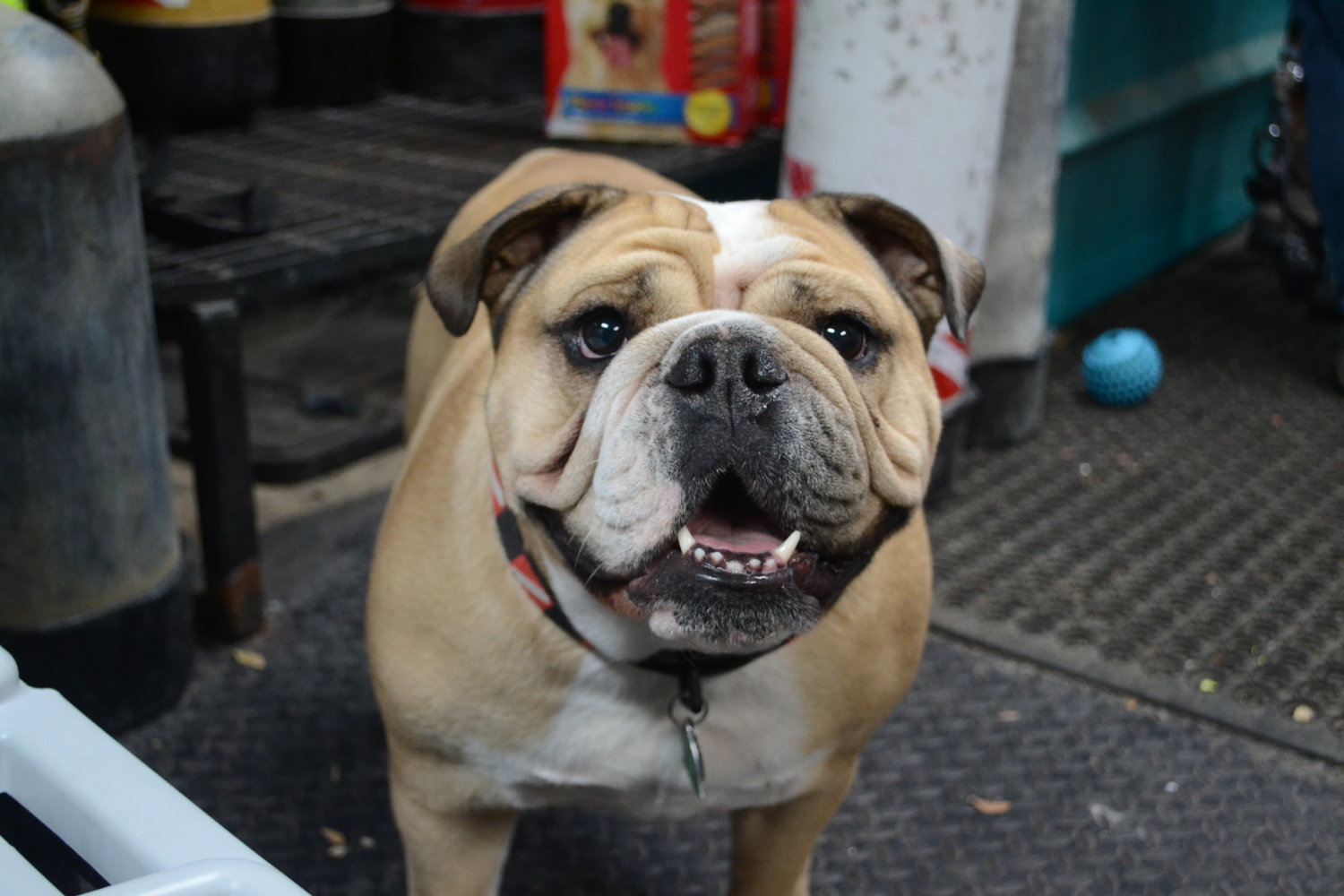 Kenzie, a friendly English Bulldog with an affinity for treats, welcomes all patrons of the dive shop.
Ethan Hartley
Previous Next
Posted Thursday, December 2, 2021 11:32 am
By Ethan Hartley

Walk into the East Bay Dive Shop, located just off the town’s main drag at 8 Church St. in Warren, and you’re likely to encounter at least two eager and friendly faces — Kenzie, a lovably rotund English Bulldog, and David Labrecque, the longtime owner and proprietor who has made a life out of sharing his love for the water.

After 35 years of running the shop, Labrecque laments that there aren’t too many places like the East Bay Dive Shop left these days, so he is pleased to report to those who have learned of his impending retirement that his well-established hub for professional and recreational divers will continue to service its customers under new ownership.

Kevin Quinlan, a Swansea native and former IT manager for the Bertucci’s chain of restaurants, never imagined he would be handed the torch and shop keys from Labrecque, but after coming into the shop to inquire about open water diving lessons, he said he fell in love with the industry. He finished his dive master certification last month and, upon learning that Labrecque was going to step down, decided to dive in head first to owning a business.

“I had been coming here for the last six years, doing IT work here and there,” Quinlan said. “And instead of seeing it go out of business, we worked out a deal that worked for both of us.”

“That was the last thing I wanted to see, was it go out of business,” Labrecque said, mentioning how much some people depend on the shop.

Labrecque, a Warren native and PADI (Professional Association of Diving Instructors)-certified dive master since 1983, opened the dive shop officially in 1986. It was originally situated as an offshoot storage facility of The Gob Shop, which neighbors the dive shop, for the sporadic selection of diving equipment it held in stock. Labrecque meticulously grew the space into a full-fledged business — offering dive training, equipment servicing and annual exotic excursions to a wide range of customers, from curious amateurs to local fire department rescue teams.

Labrecque said that the shop, in a normal year, would certify anywhere between 60 to 100 new divers. Although COVID has put a hold on the practice for the time being, the shop also organizes an annual winter excursion to the Caribbean for adventure-seeking divers looking to escape the New England weather.

While Quinlan said he was excited to bring new elements of technology — such as improving the website and gaining a social media presence — the foundation of the business is rock solid and he looks to continue that legacy.

“I’ve been hanging around the past few months and getting the lay of the land,” he said. “Dave hasn’t had any trouble keeping it going, so there’s not much to change.”

Labrecque said he is happy to help ease Quinlan through the transition, but is also looking forward to his retirement. He hopes to venture into the outdoors more often to do hiking, fishing, camping, and possibly go dive in the South Pacific.

“I haven’t had a true summer vacation in 36 years,” he said.