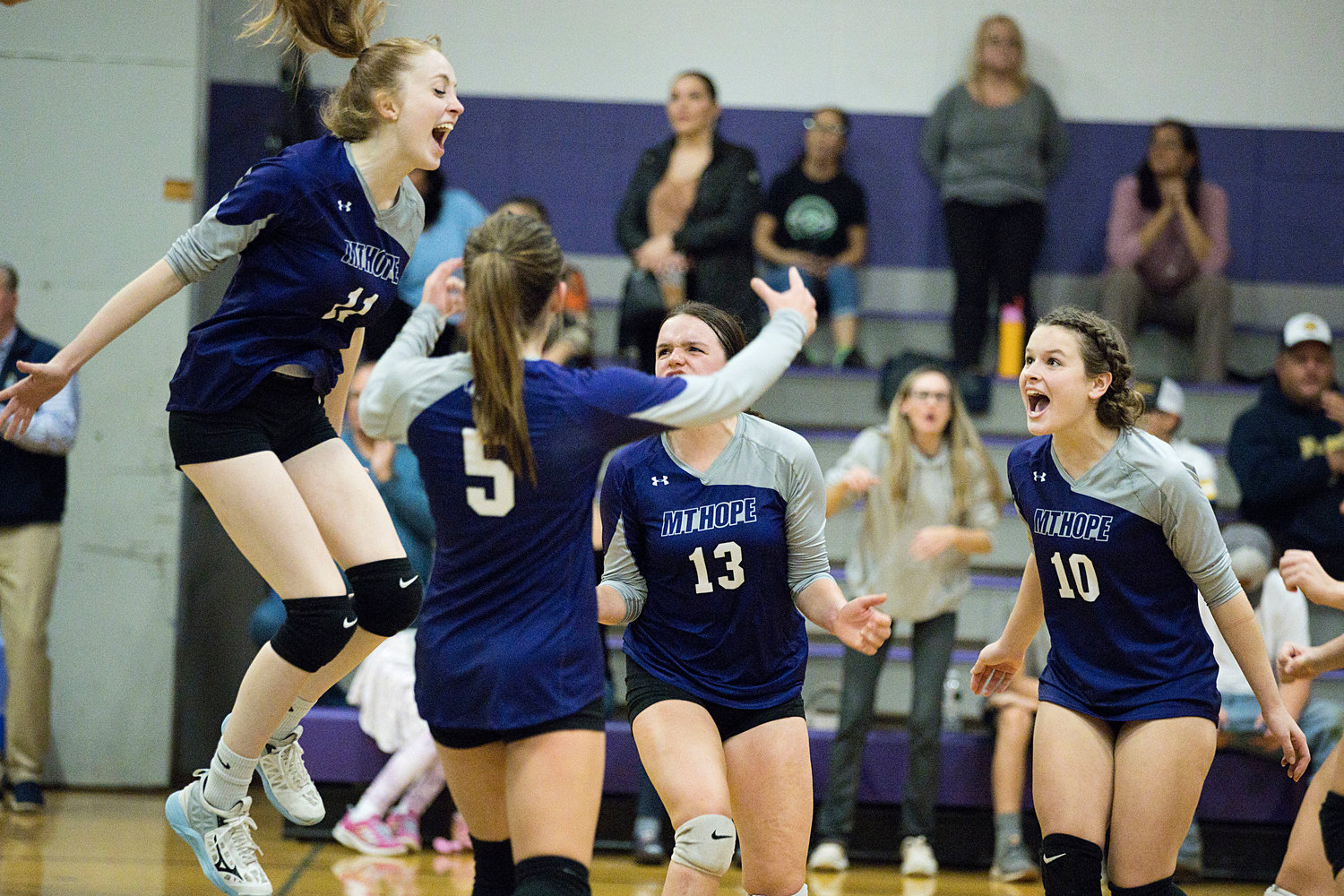 Jillian Brown (left) and her teammates celebrate after coming from behind and beating Lincoln in a home playoff game on Tuesday. The Huskies move on to face East Providence on Friday.
Photos by Julie Furtado 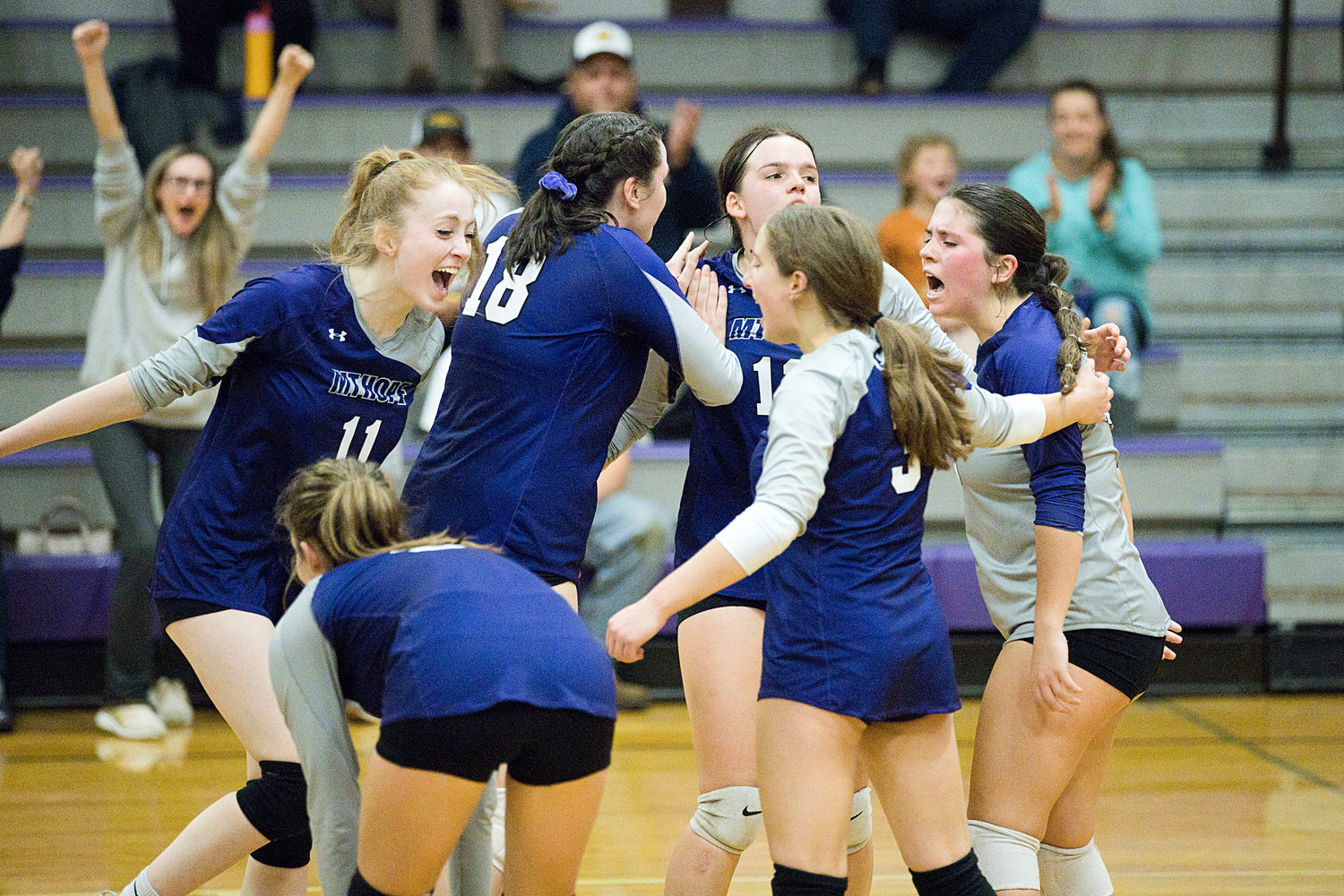 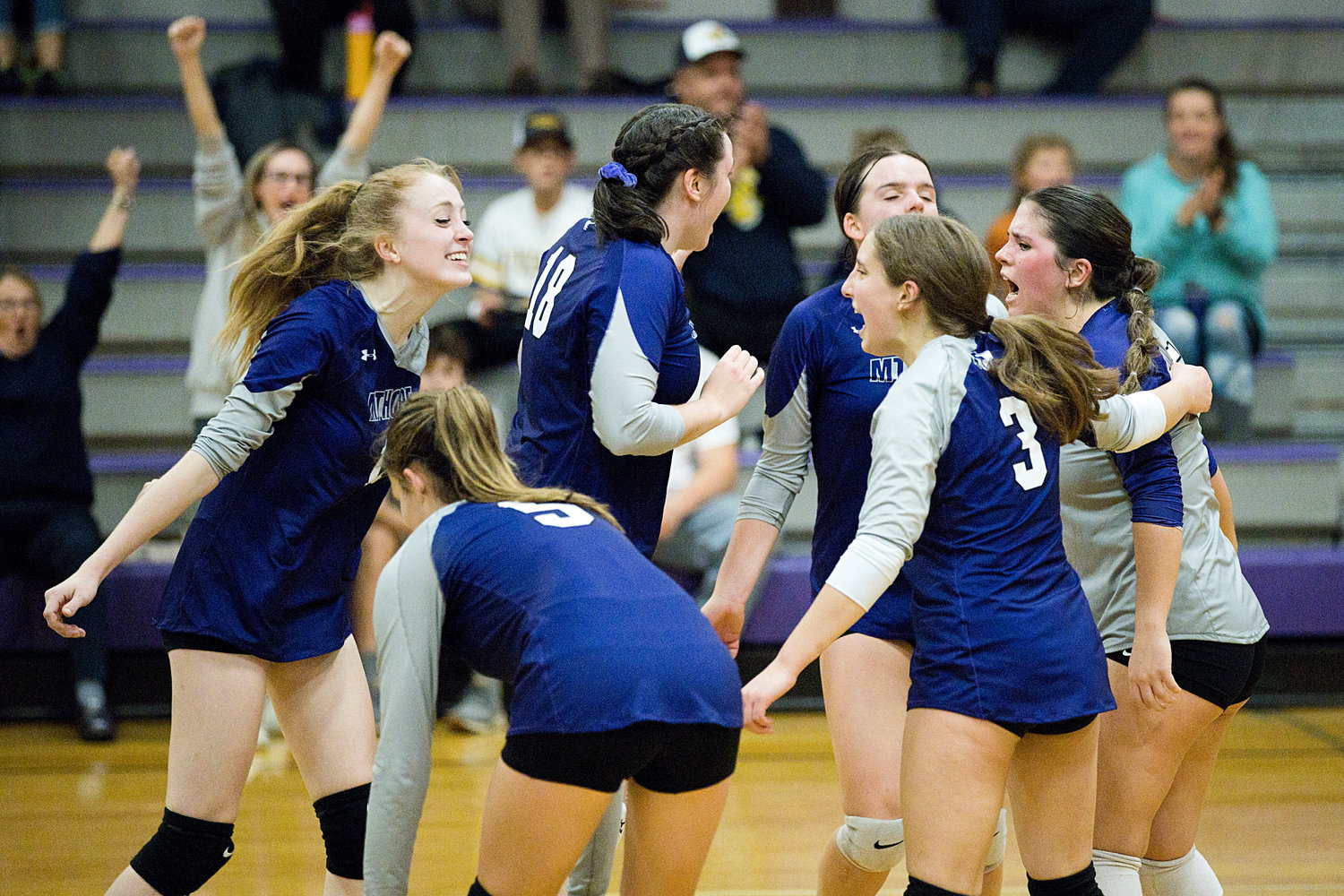 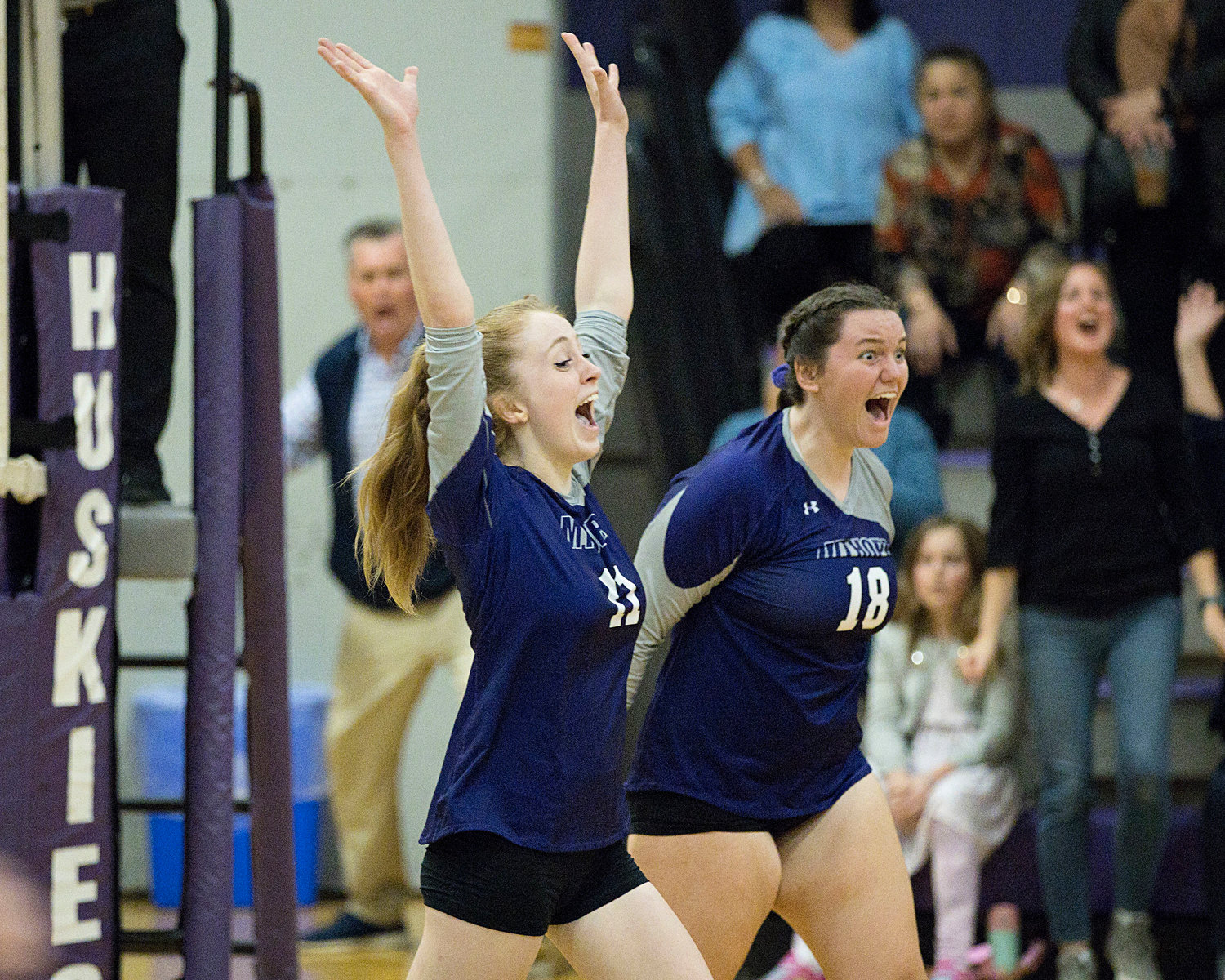 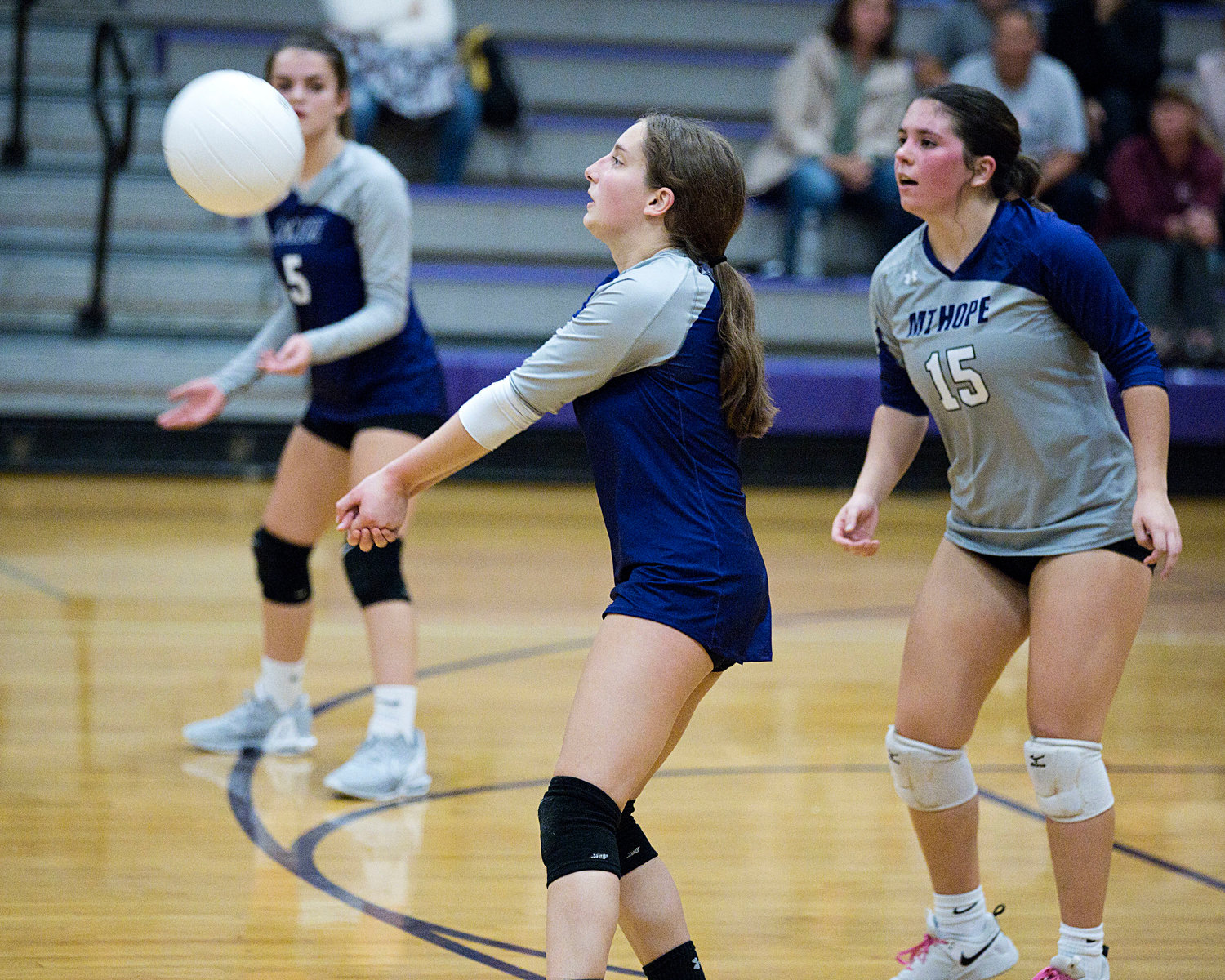 Emma Torres receives a serve as teammate Samantha Malafronte looks on from behind. 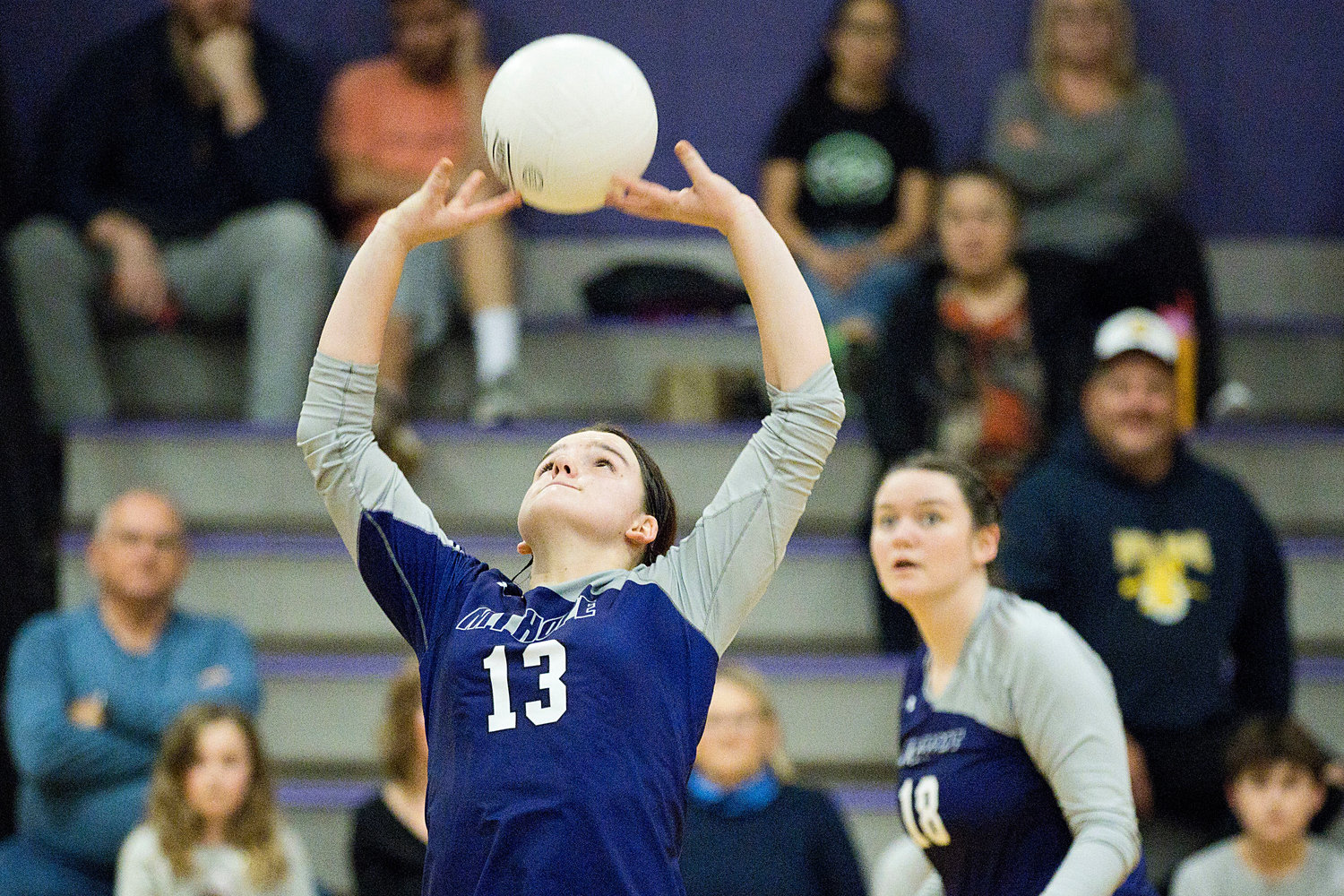 Mia Shaw sets the ball to a teammate. 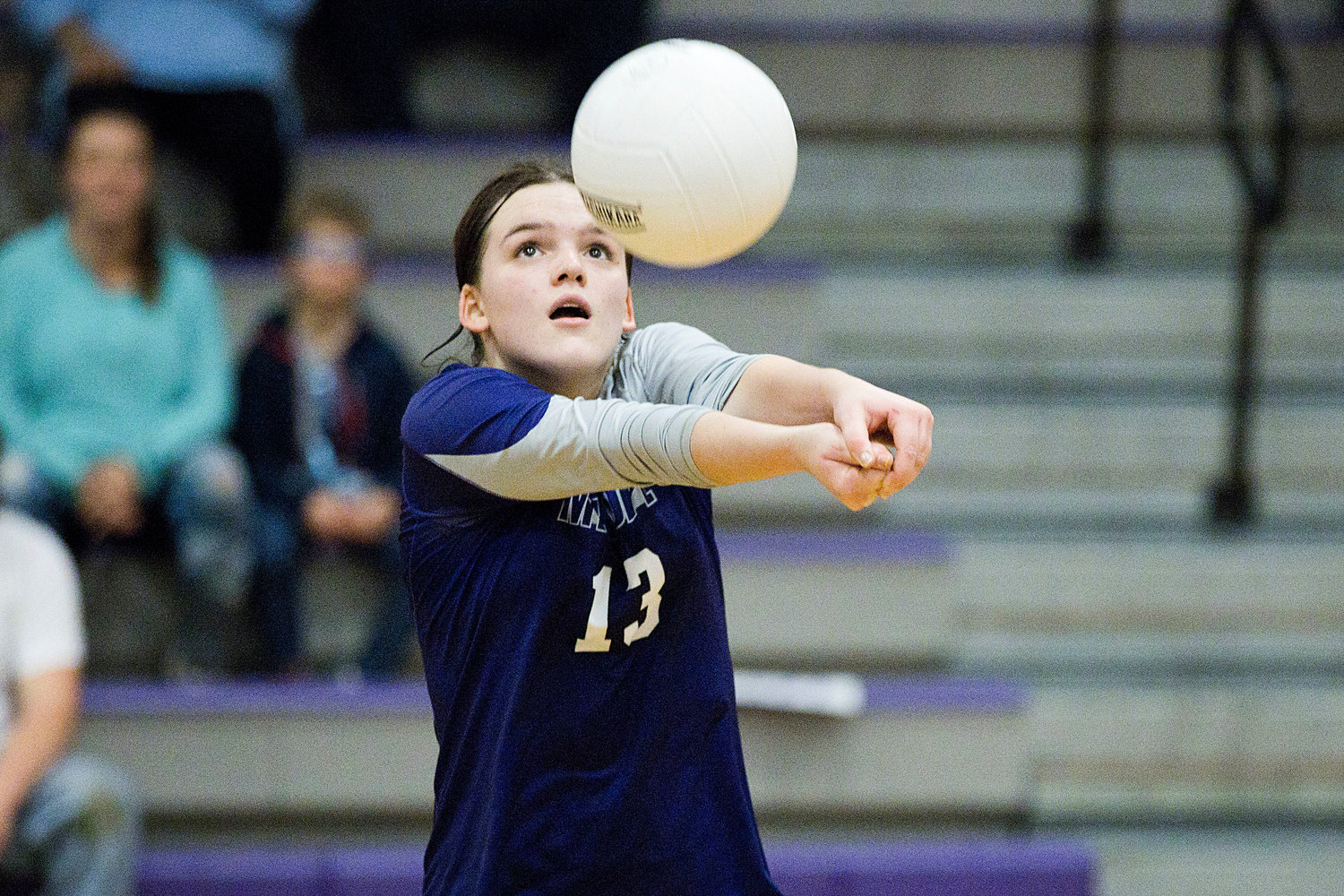 Mia Shaw volleys the ball over the net. 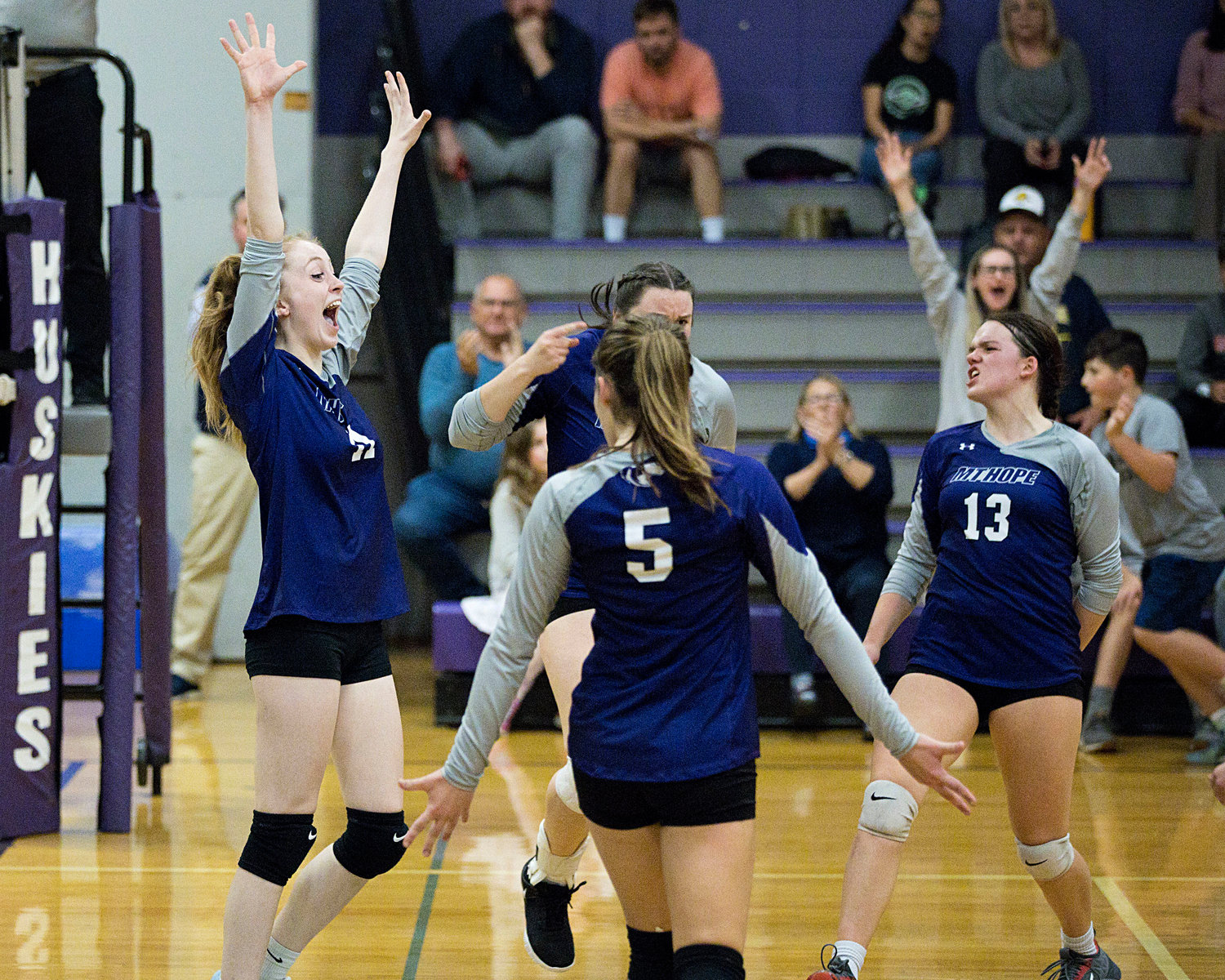 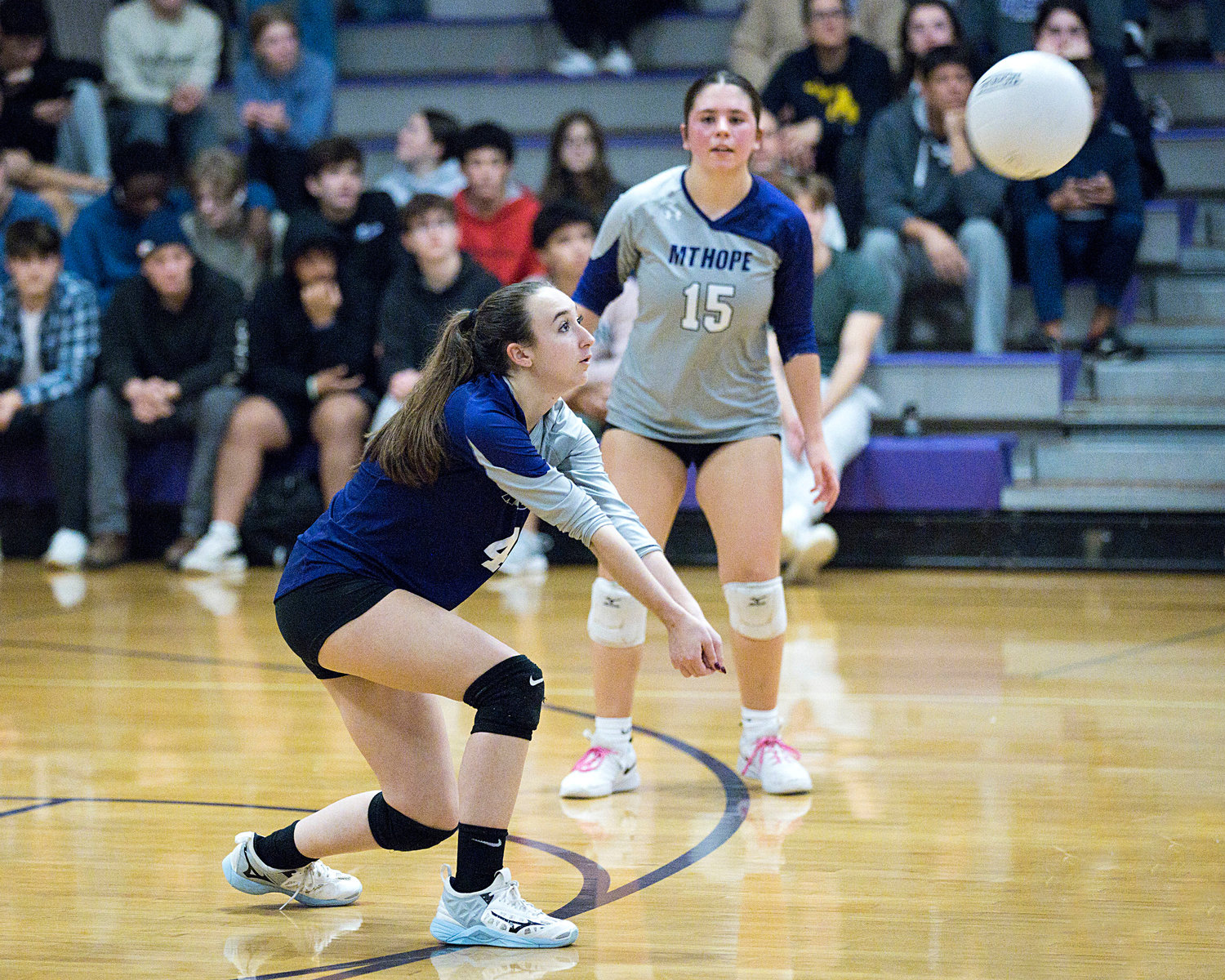 Gwenyth Tucker gets under the  ball to keep it in play while battling Lincoln in the DII Preliminary game, Tuesday. 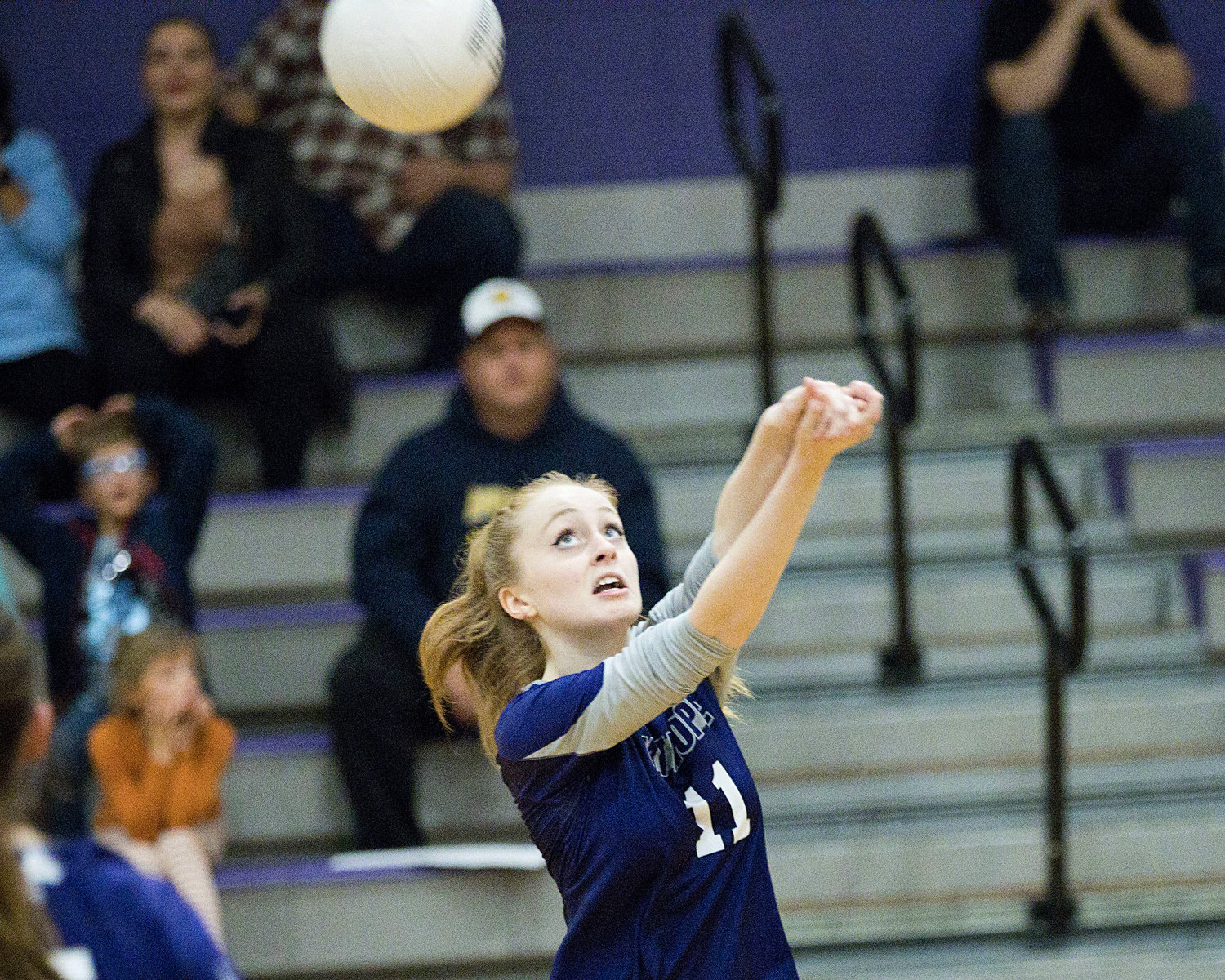 Jillian Brown sends the ball over the net while competing with Lincoln in the DII Preliminary game, Tuesday. Mia Shaw controls the ball while rallying with Lincoln, Tuesday. 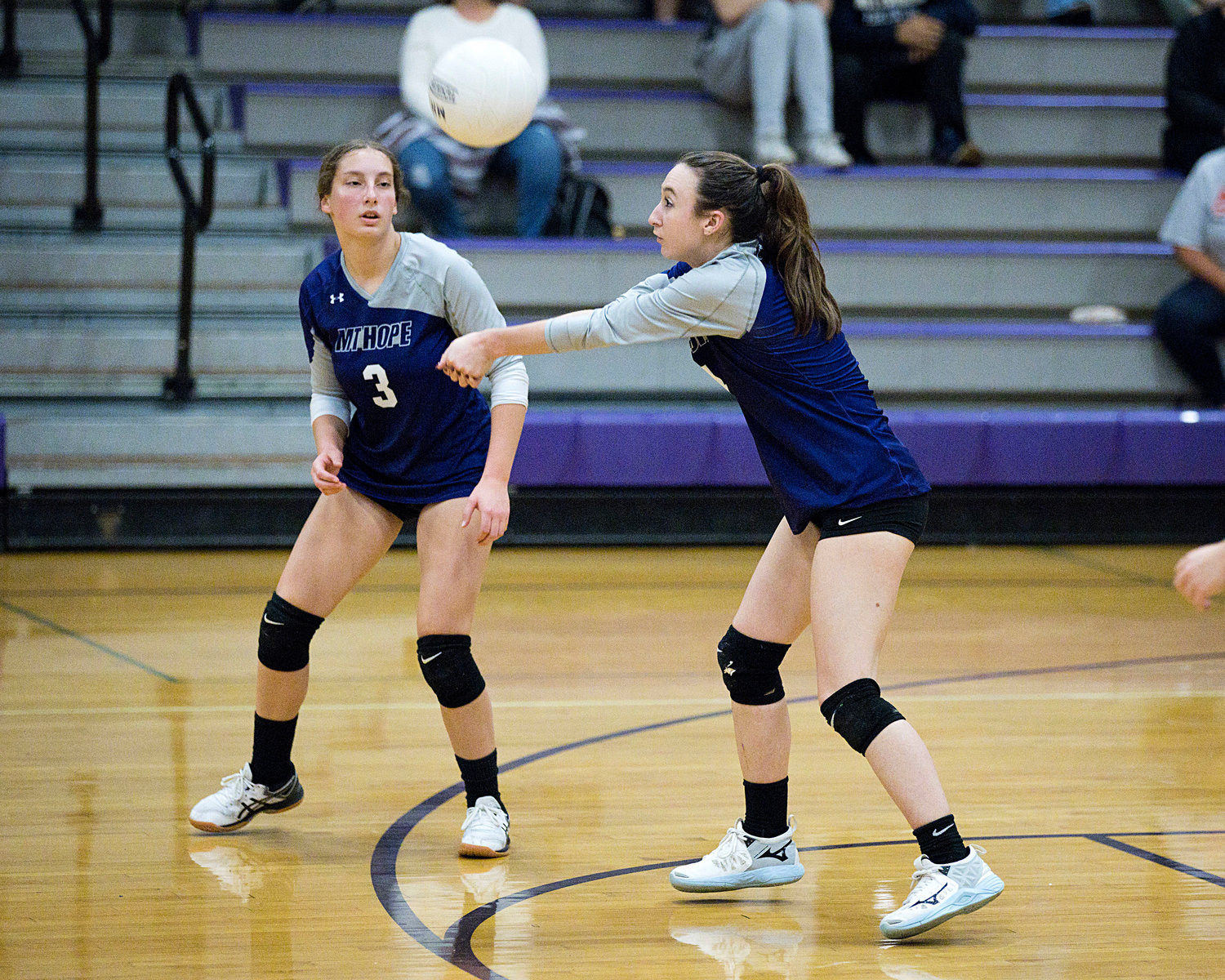 Emma Torres readies to spike as teammate, Gwenyth Tucker bumps the ball, up. 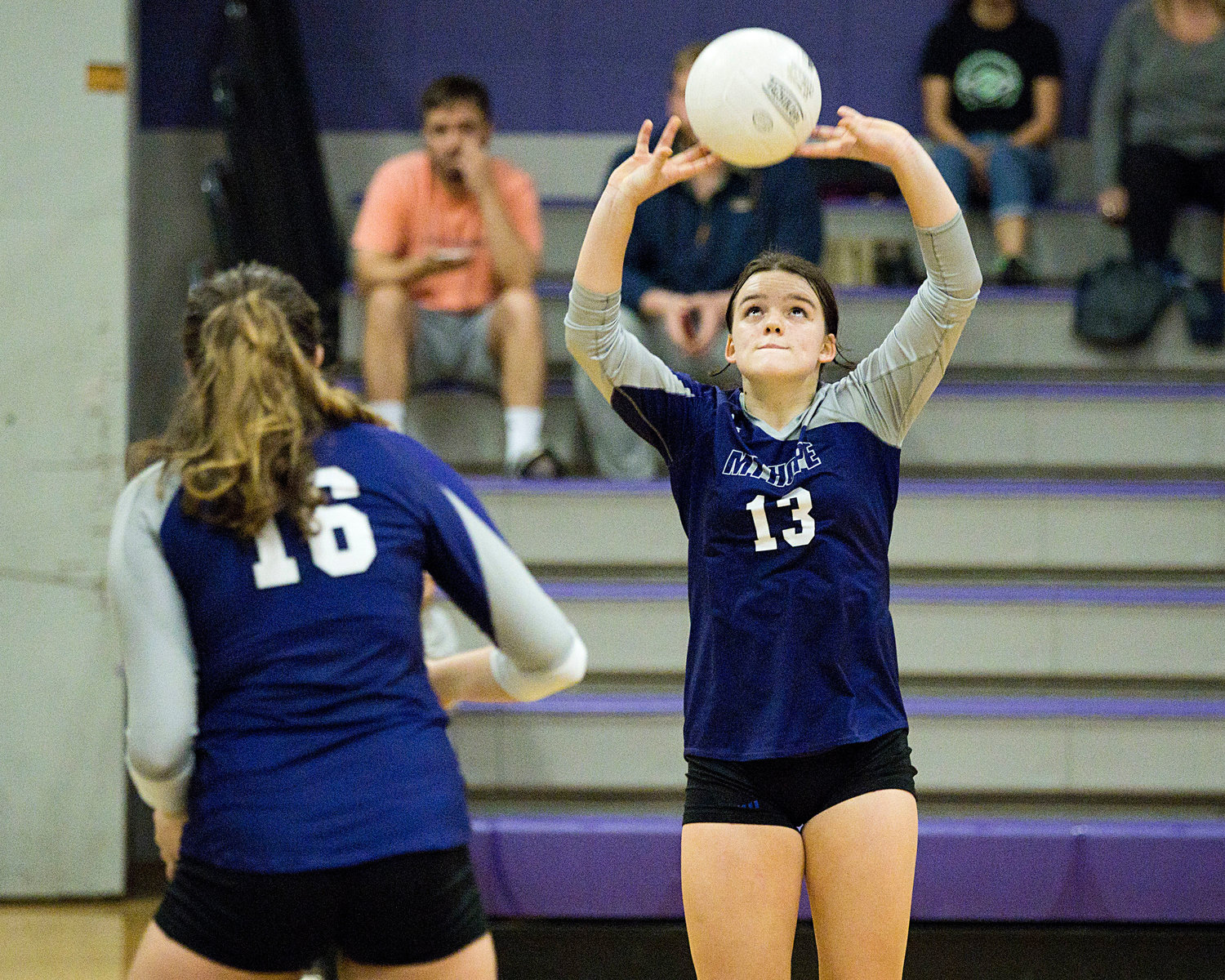 Mia Shaw sets the ball up for a teammate to spike. Abigail Allen sends the ball over the net while rallying with Lincoln in the DII Preliminary game, Tuesday. Head Coach Lisa Lunney talks with her team between sets. Gianna Lunney sends the ball back over the net while rallying with Lincoln, Tuesday. Gwenyth Tucker dives under the the ball while receiving a serve from a Lincoln opponent. Sarah Wilcox serves the ball to Lincoln while competing in the DII Preliminary game, Tuesday. Mia Shaw and Jillian Brown defend the net while battling Lincoln in a preliminary game, Tuesday. Gwenyth Tucker looks on as Emma Torres bumps the ball up for a teammate. Mary Gerhard gets under the ball to keep it in play during the Preliminary game against Lincoln, Tuesday.
Previous Next
Posted Wednesday, November 2, 2022 2:57 pm
Story by Richard W. dionne, Jr. Photos by Julie Furtado

The Mt. Hope volleyball team came back to Beat Lincoln 3-2 (17-25, 16-25, 25-22, 25-14, 15-10) to advance and face East Providence in the Division II quarterfinals. Mia Shaw, Jillian Brown, Sarah Wilcox and Gianna Lunney compiled 35 kills during the match. Shaw the team’s setter, dished out 28 assists and 22 digs to go with her nine kills during the match. Outside hitters Jillian Brown, a senior and Sarah Wilcox, a freshman, each smashed ten kills. Brown also had two blocks and Wilcox contributed 13 digs defensively. Lunney also a freshman tallied six kills and and two blocks at middle hitter.

“It was a total team effort,” said head coach Lisa Lunney who said that she likes being in that underdog position. The Huskies who improved to 12-7 will be the underdog again when they travel to East Providence who is 16-2, on Friday. The match will start at 6:30 p.m.