The Westport and Tiverton baseball teams met for their first ever scrimmage game behind the former Westport High School on a cold and raw Wednesday afternoon. The Tigers won the game 5-1. Westport … 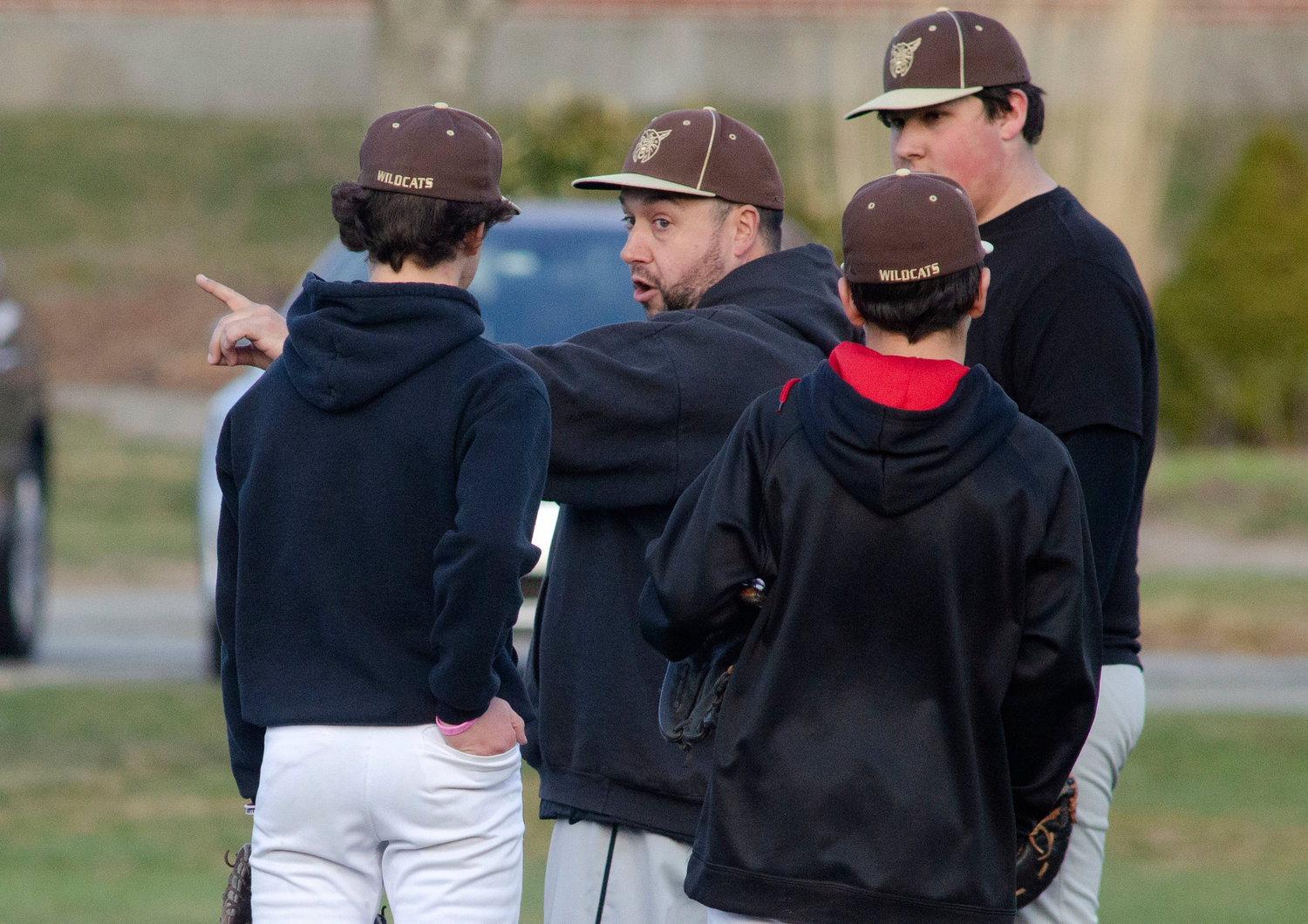 Westport head coach Jason Pacheco speaks to his young infielders during a scrimmage game against Tiverton on Wednesday. The Wildcats who went 8-3 last season, start the 2022 season schedule on Tuesday at Case High School.
Photos by Richard W. Dionne, Jr. 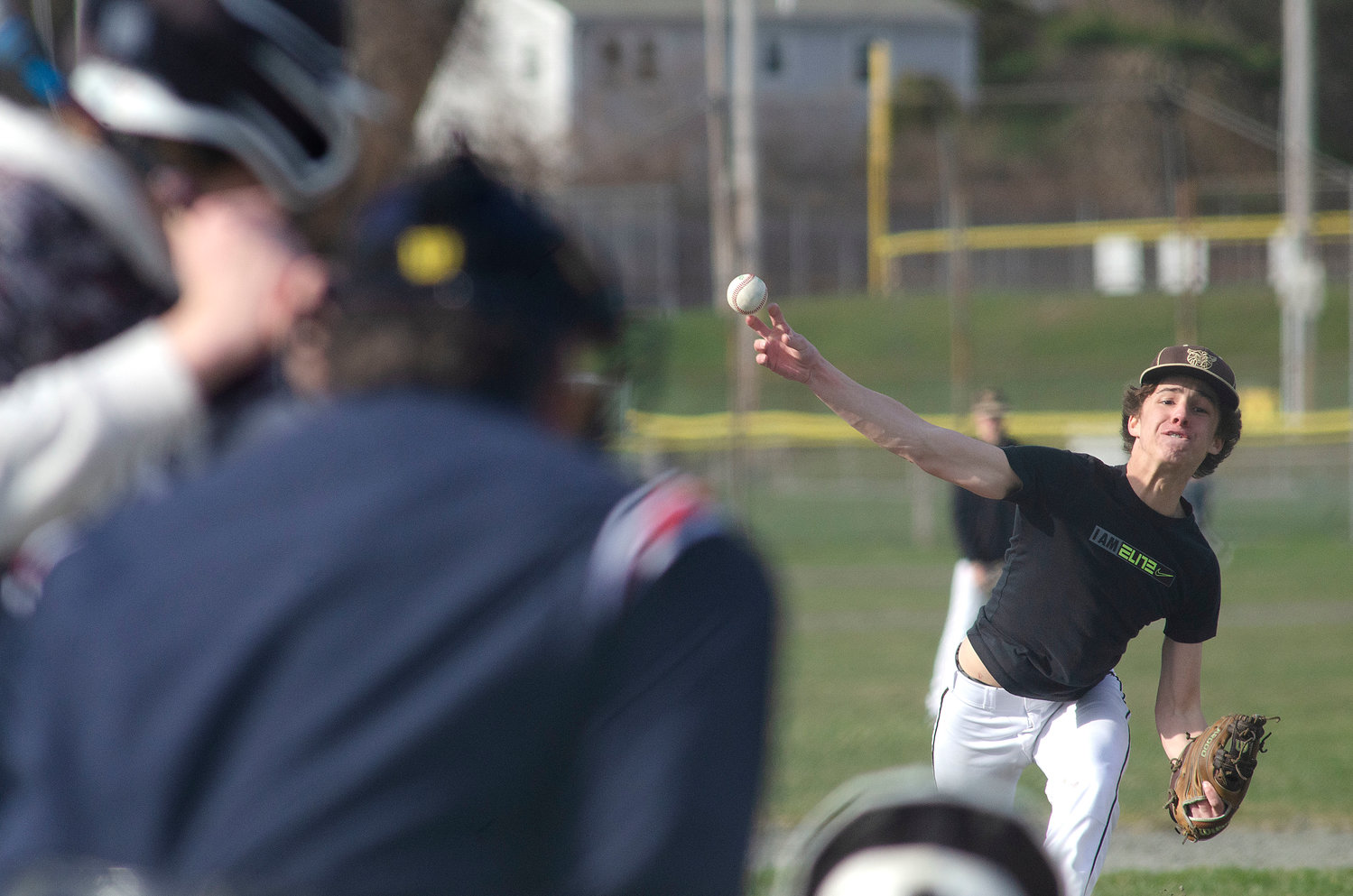 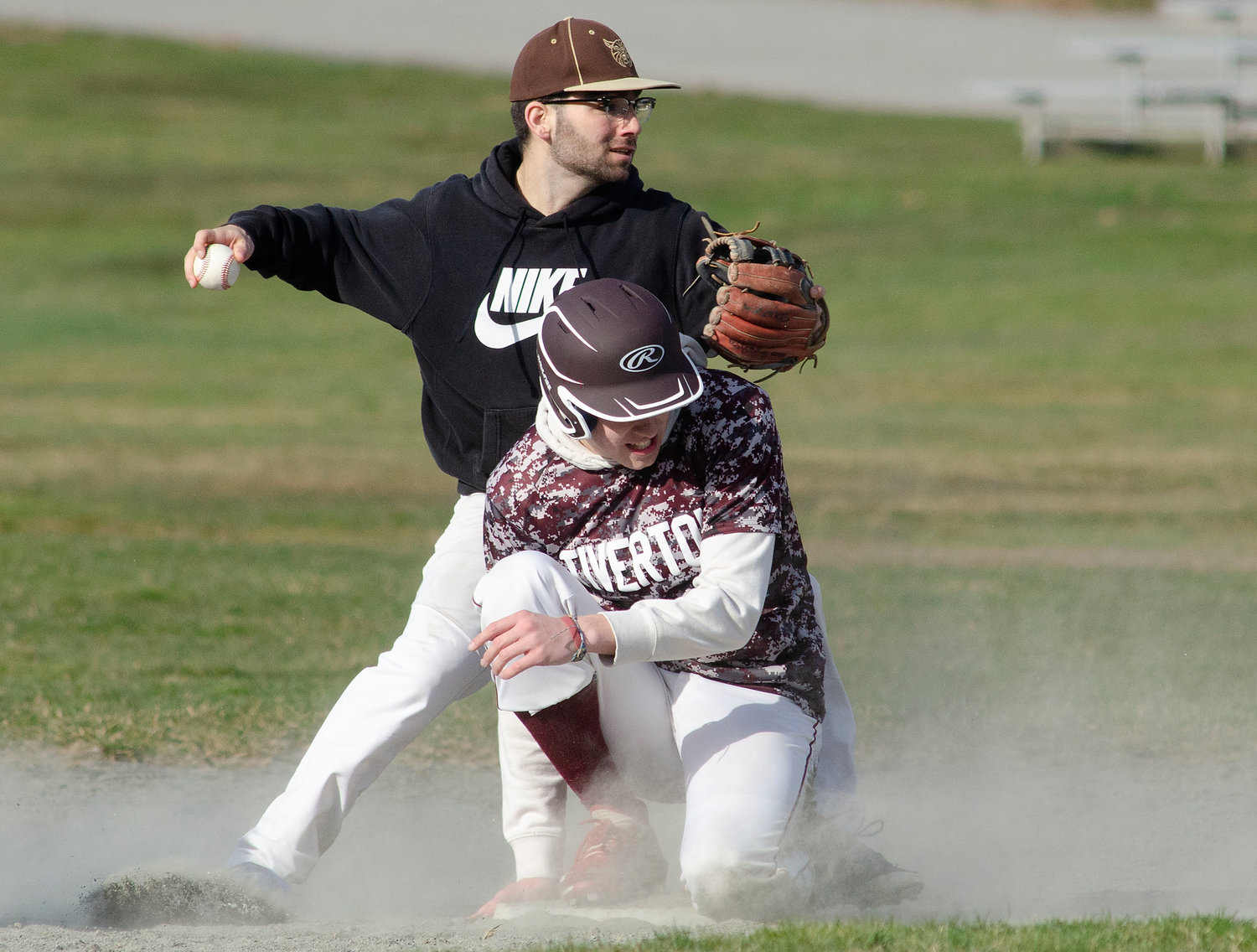 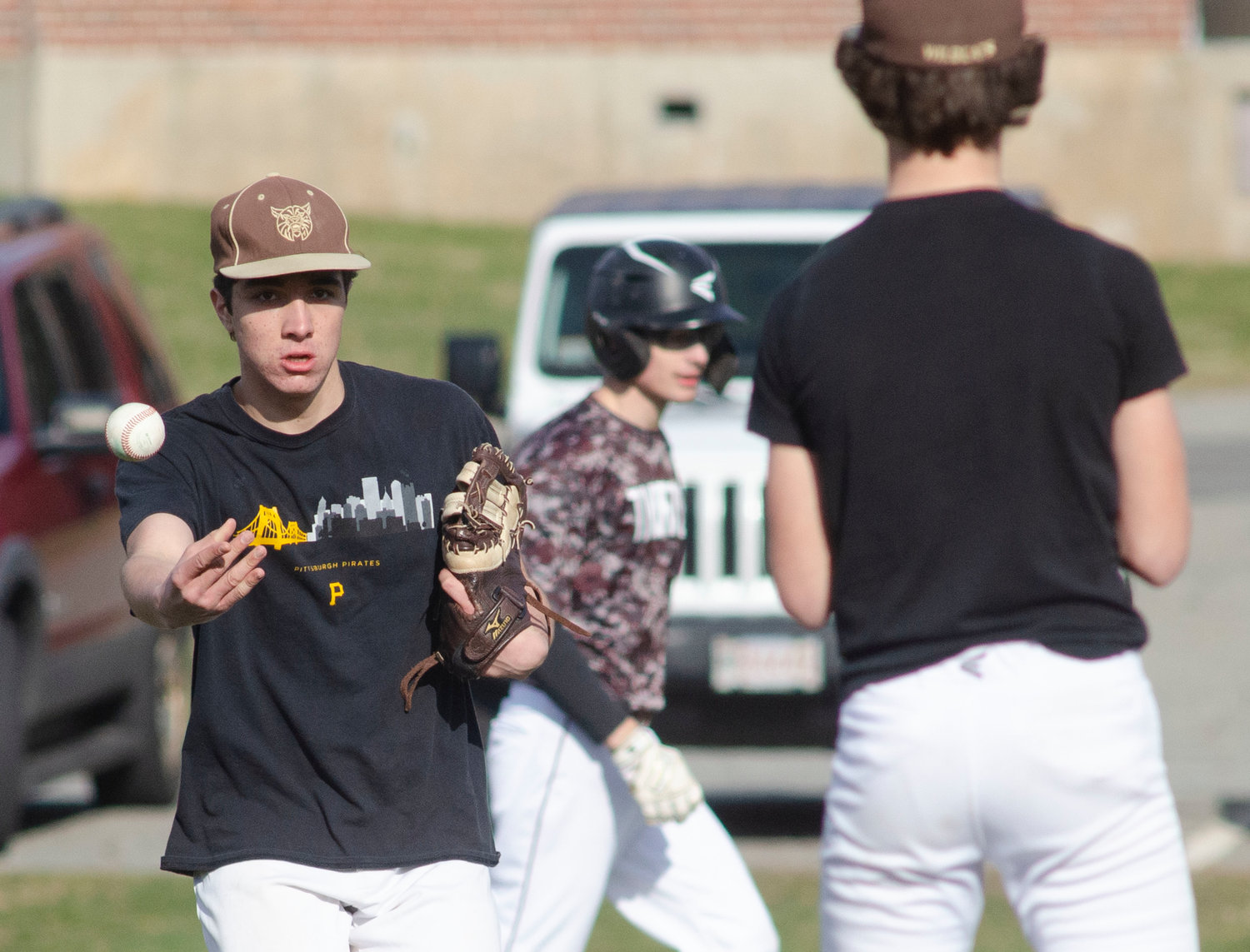 Max Morotti playing first base, flips the ball to pitcher Max Gallant after recording an out.
Photos by Richard W. Dionne, Jr. 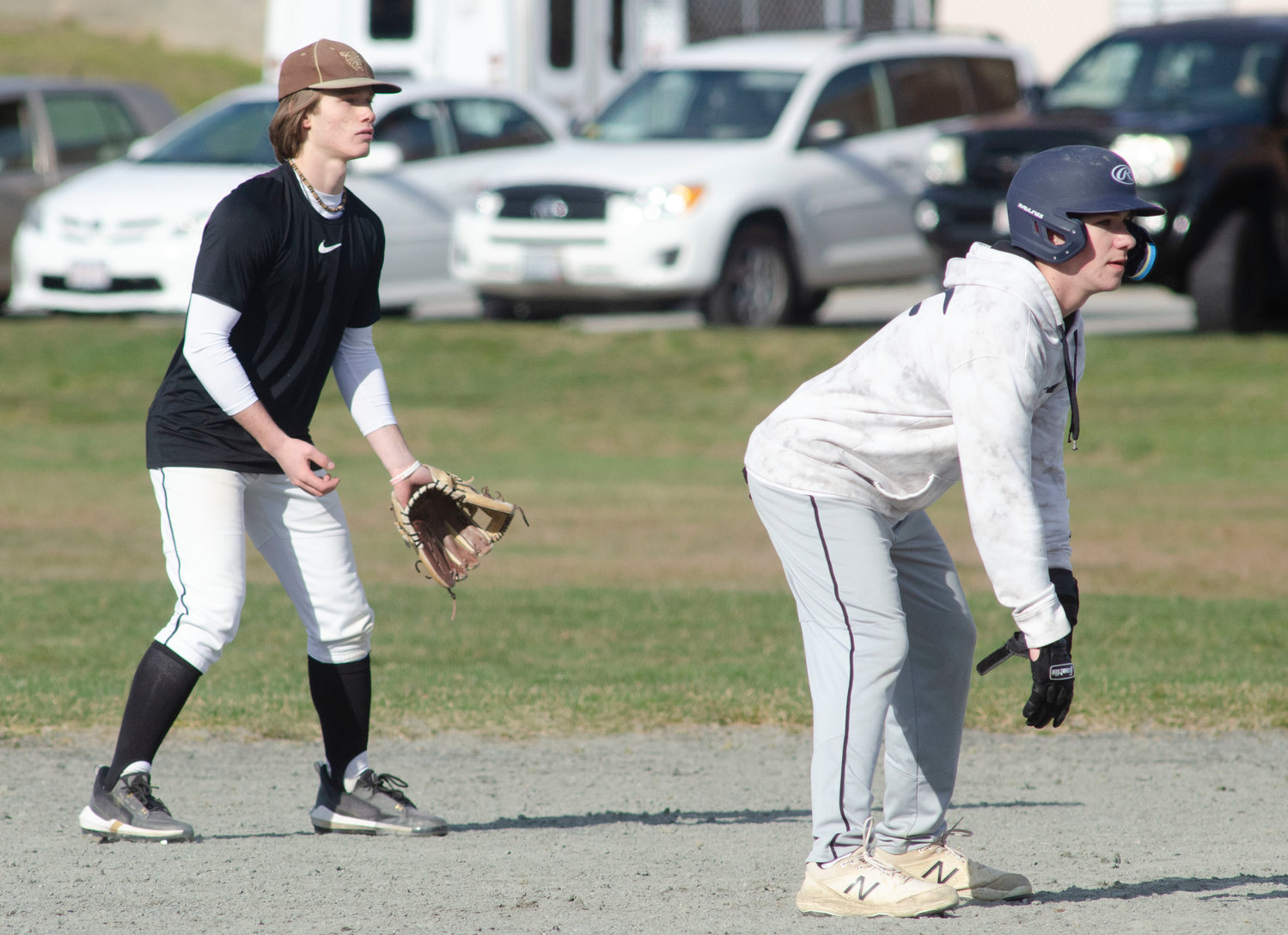 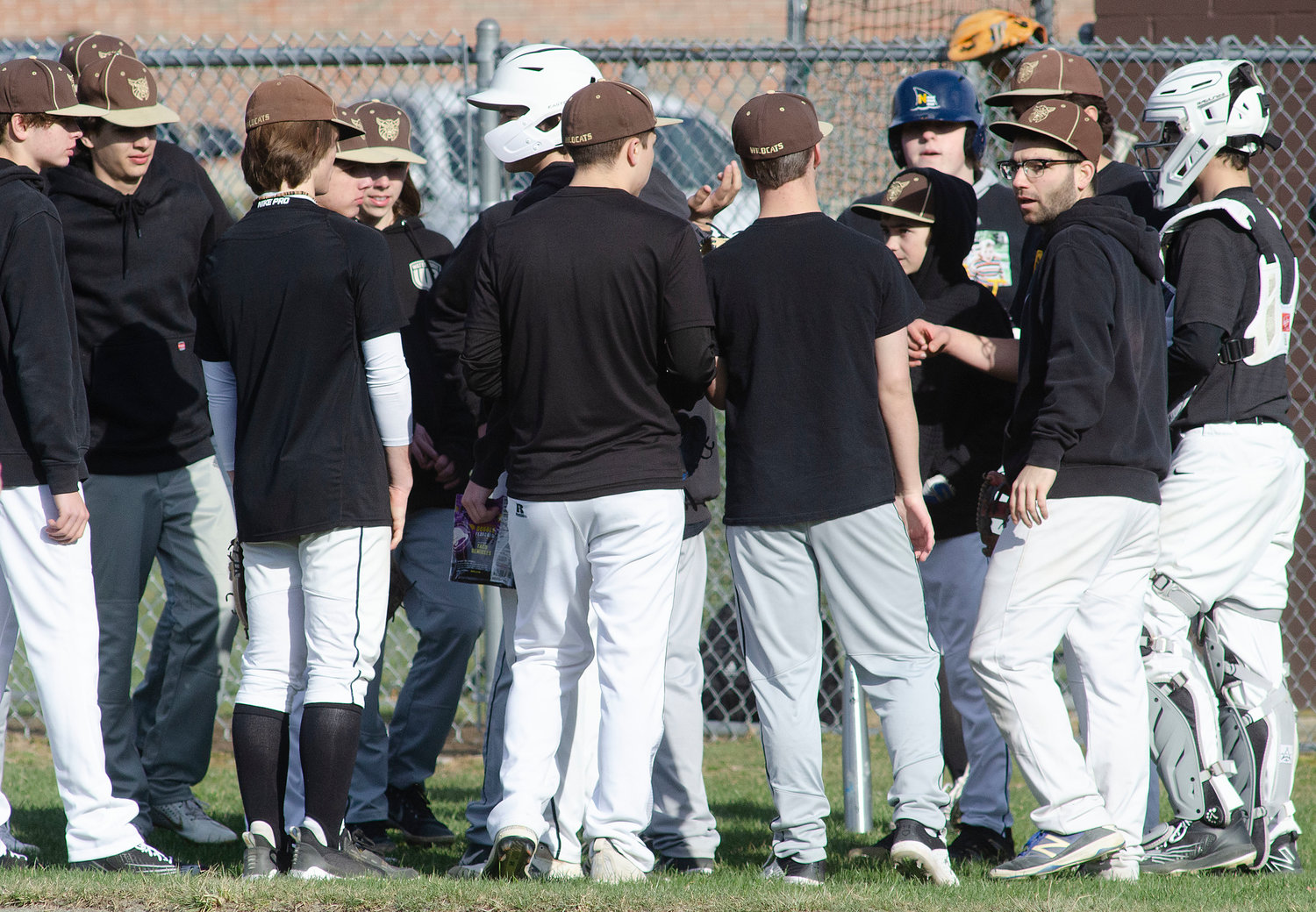 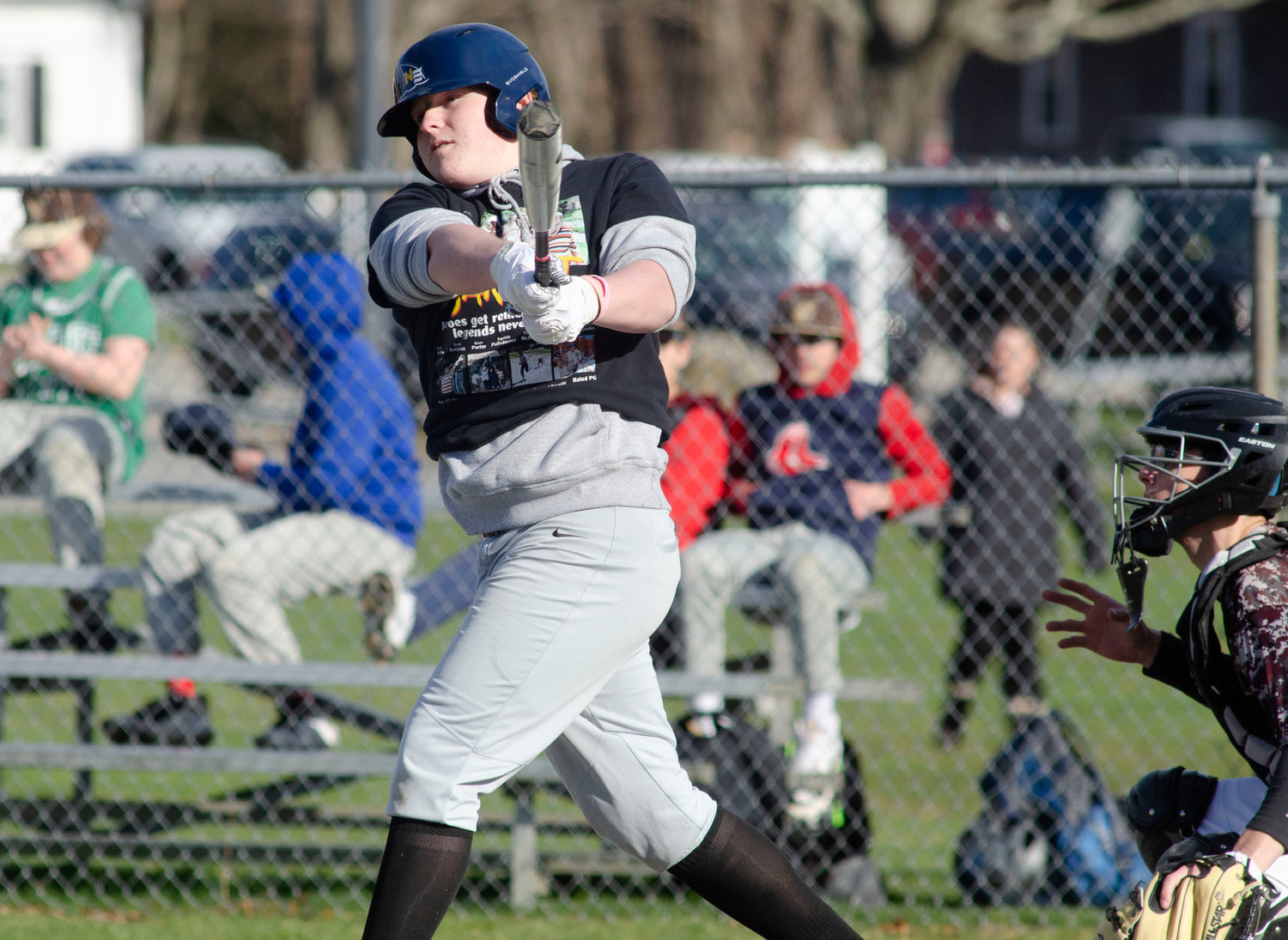 Clean up hitter Connor James gets a hold of a pitch during the game. Coach Pacheco is looking for the junior to provide some power this season.
Photos by Richard W. Dionne, Jr. 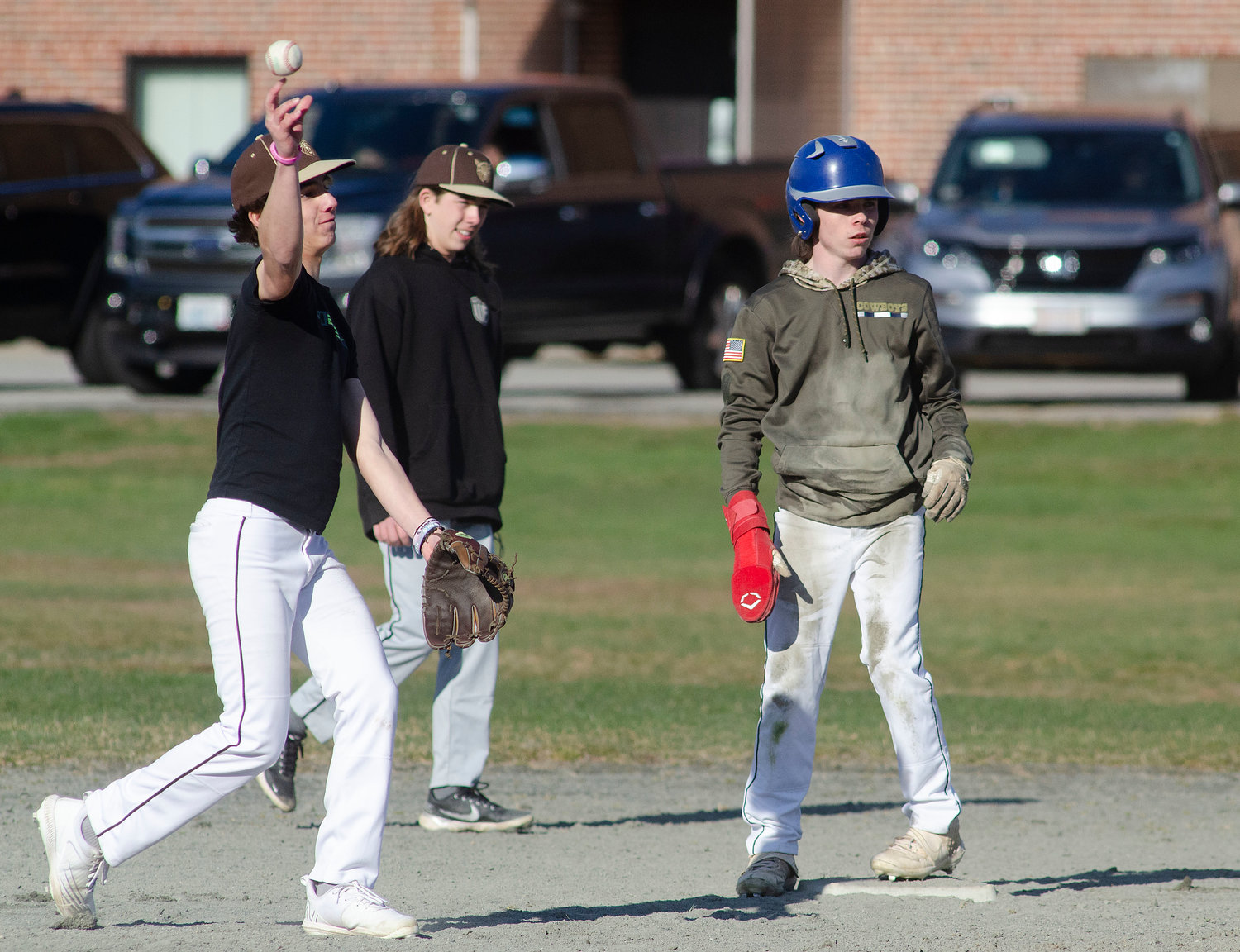 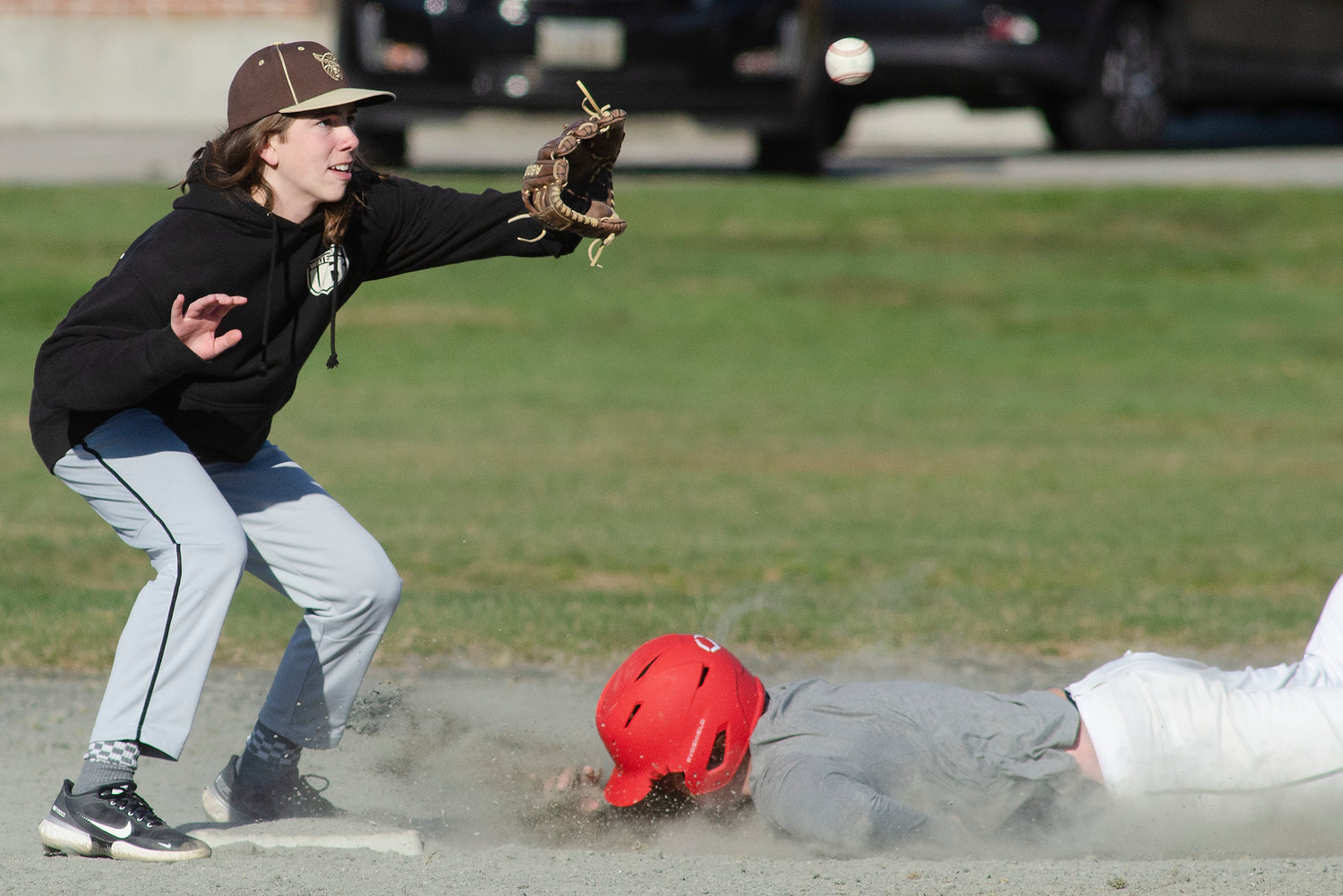 Matt Costa slaps a tag on Tiverton baserunner Cam Rego as he attempts to steal second base.
Photos by Richard W. Dionne, Jr. 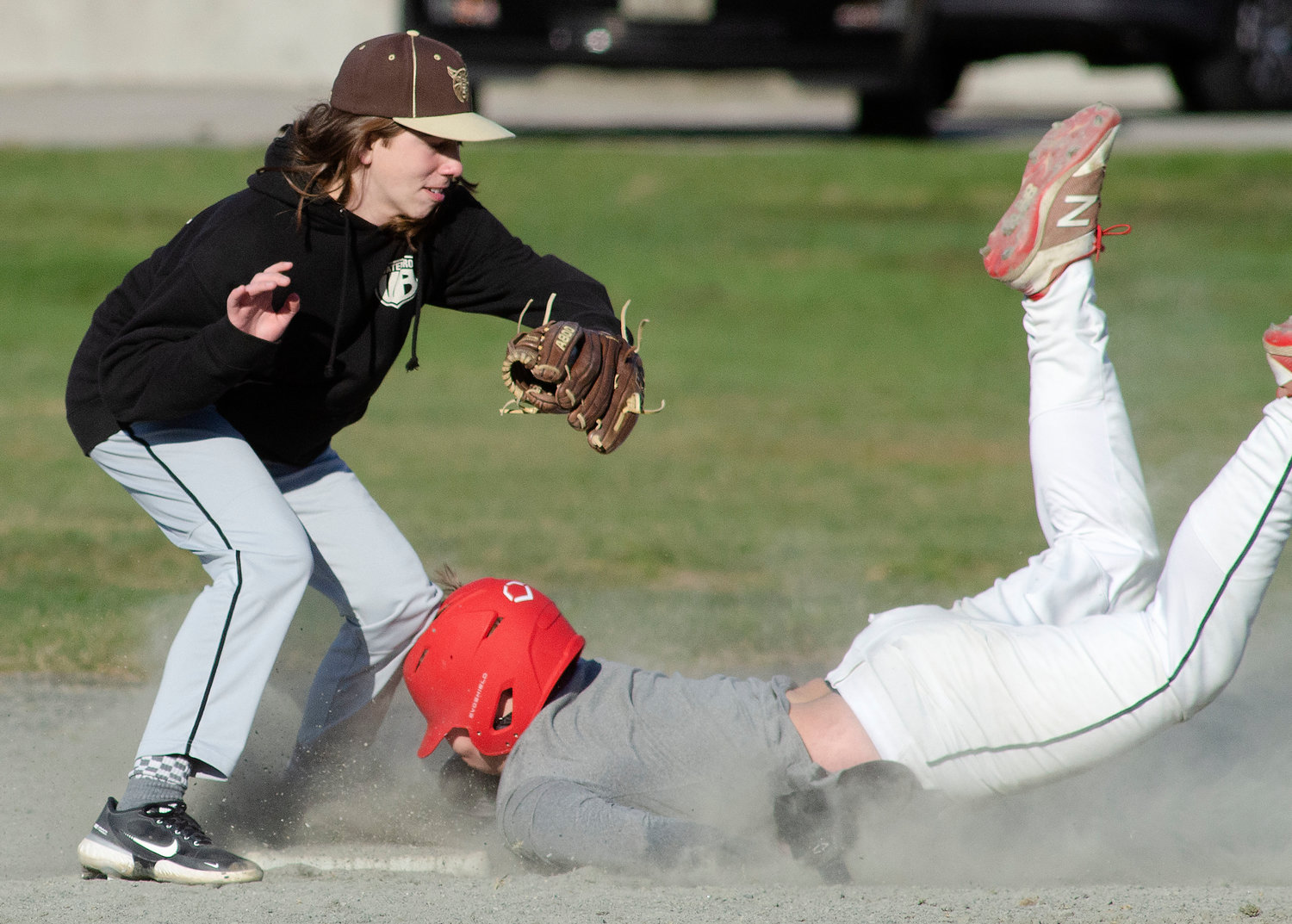 Wildcats head coach Jason Pacheco speaks to his young infield during a scrimmage game against Tiverton on Wednesday.
Rich Dionne 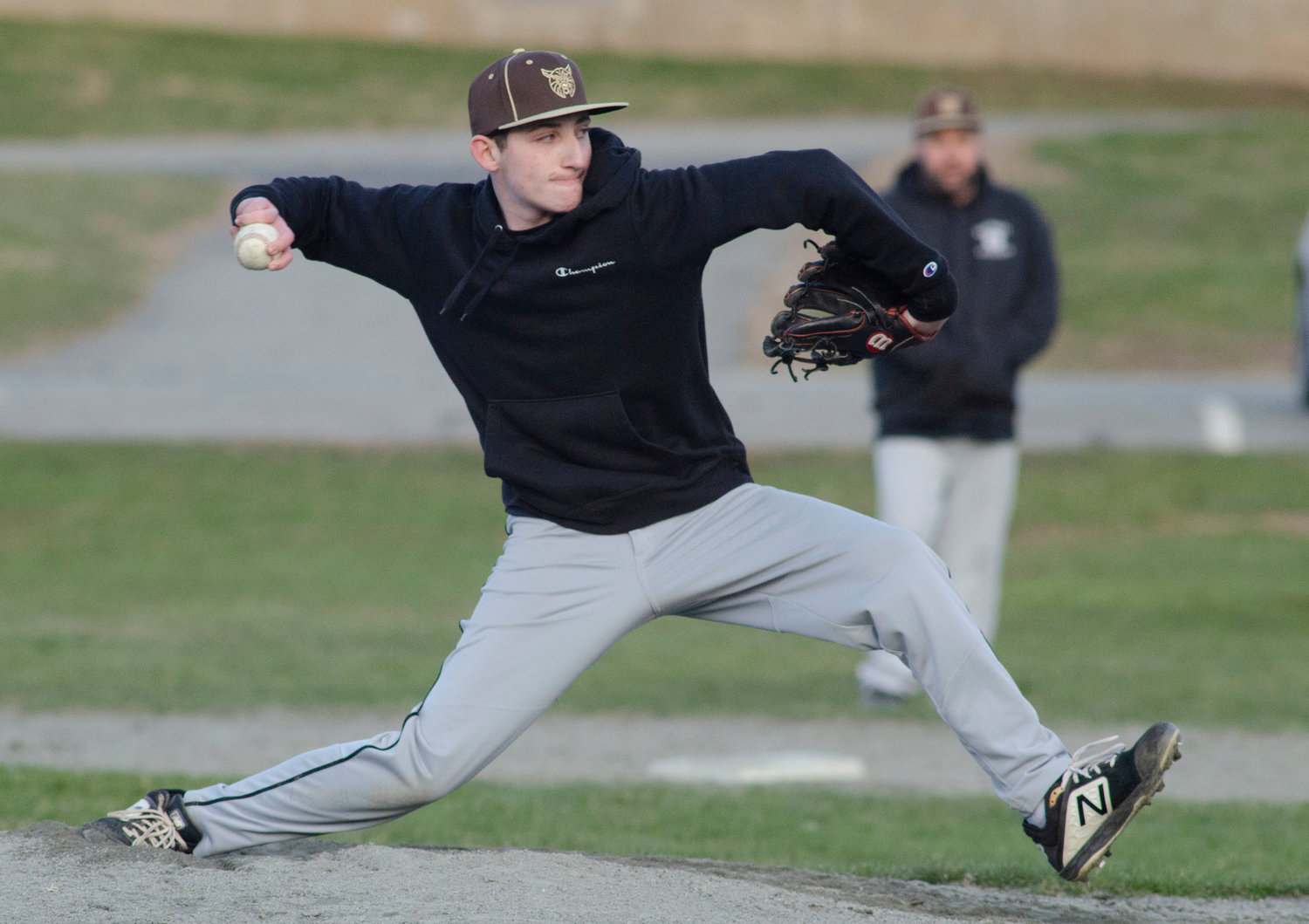 Will Souza makes a pitch during the scrimmage.
Photos by Richard W. Dionne, Jr. 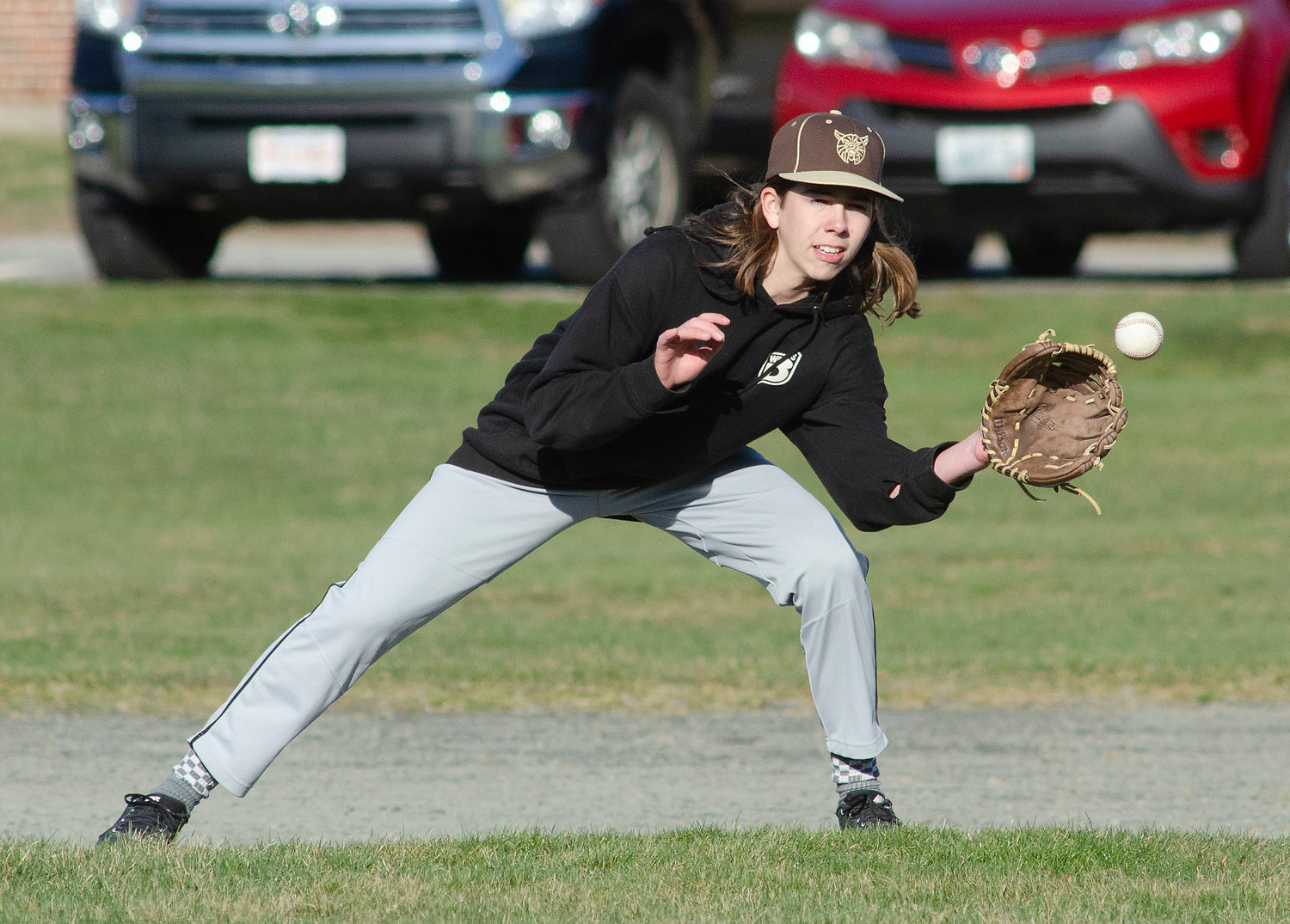 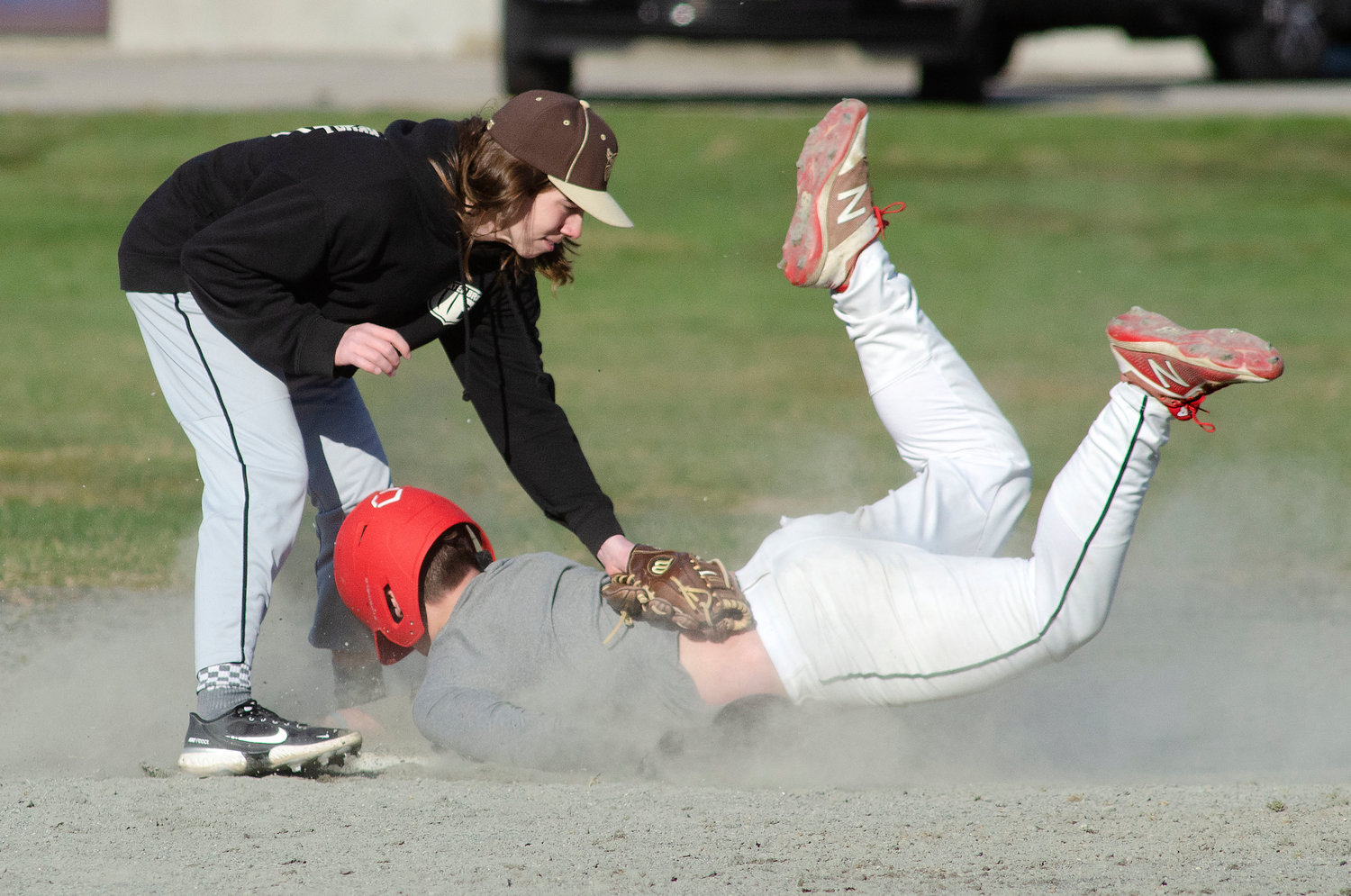 “I was pleased with the amount of kids that we have that can pitch and throw strikes. I am looking forward to a good, competitive season.”
Head coach Jason Pacheco

The Westport and Tiverton baseball teams met for their first ever scrimmage game behind the former Westport High School on a cold and raw Wednesday afternoon. The Tigers won the game 5-1. Westport head coach Jason Pacheco used seven different pitchers and Tiverton head coach Bob Murray threw four. Both teams used all of their players in the seven inning stint. Coach Pacheco used the game to get a look at his pitchers and both coaches stopped the game for teachable moments on the field.

“I was pleased with the amount of kids that we have that can pitch and throw strikes,” said Coach Pacheco. “I am looking forward to a good, competitive season.”

This season the team will play an 18 game schedule and start the season off with a bang against two difficult opponents.

“We have two tough games right off the bat,”said Coach Pacheco, “Then we’ll see where we are at.” The team begins play on the road at Case High School on Tuesday, April, 5 at 3:45 p.m., and at West Bridgewater on Thursday at 3:30 p.m. The team hosts Bishop Connolly on Tuesday April 12 at 3:30 p.m. for their home opener behind the former high school.

The 2022 Wildcats have just two seniors and a ton of underclassmen.

“Max is a big kid and throws the ball well,” said Coach Pacheco. “He was our ace last season. He throws a fast ball, curve and change up. We’ve been working on the change up and getting him to use it a little more. I spoke to him today about commanding the inside of the plate and not leaving pitches out over the middle.”

“Leary throws a fast ball and breaking ball,” Coach Pacheco said. “He’s another one working on the change up. The change up is my favorite pitch. It’s one that I love to teach.”

Coach Pacheco plans to work on the change up with all of his pitchers.

“We will work a lot on changing speeds,” he said.

Luke Finglas is slated as the Wildcats number three starter. The freshman, a tall lanky right hander, threw a shut out in his debut last season. Finglas struck out 10, allowed just two hits and a walk. The freshman has a stealthy fast ball and a twelve to six curve ball that breaks downward, according to Coach Pacheco.

“I’m looking for Luke to step up this season,” he said. “He’s got a very good breaking ball. He comes over the top as opposed to a slider that most guys throw.”

Connor James, Max Galant, Shawn Lavoie, Will Souza and Owen Boudria will likely pitch out the pen and occasionally spot start for the Wildcats.

The Wildcats have a veteran group playing infield this spring with Noah Sowle at short, Nick Arruda at second, Chris Wilson at first, Noah Lacey at catcher and Morotti at third.

Sowle, a small sinewy junior has quick hands, a strong arm and good range according to Coach Pacheco.

“This is Noah’s third year playing short,” said Coach Pacheco. “He’s the leader of our infield. He can play the middle and has a strong enough arm to make that throw deep in the hole.”

Sowle has a lot of practice making double plays with Arruda, a senior who will play second base. The pair have played together for the last three seasons. “Nick has really grown into a leadership role on this team, vocally and with his play,” Coach Pacheco said. “He and Noah make a good tandem up the middle. They are very comfortable with each other.”

Wilson, the team’s other senior, will play first base, Wilson has some size and a strong arm. Morotti will be the everyday third baseman when not pitching. James and Shawn Lavoie will also platoon at the position.

“The third basemen all play well and pitch, so we’ll rotate them a bit,” said Coach Pacheco.

Lacey, a junior, will catch for the Wildcats, though Coach Pacheco was pleased to find a back up catcher in freshman Brighten Graham who played a few innings during the Tiverton scrimmage.

The Wildcats will play Cam Leary, Finglas, Boudria, and Gallant in the outfield. Leary will play center field when not pitching. “I got options,” Coach Pacheco said and he’s got some depth.

Dylan Kirby, an underclassman, played well in his outfield debut, snaring a ball in the gap. He will also be added to the outfield group.

The Wildcats don’t particularly have a lot of clout offensively, but they do have an abundance of speed.

“we’ll be quick,” said Coach Pacheco. “We need baserunners, because we’re going to run. We’ll be aggressive on the base paths.”

Sowle will again bat first to lead the lineup for the Wildcats. Last season, the junior batted .371, with 13 hits, 7 RBI, 8 stolen bases and 15 runs scored. He hit 5 doubles.

“Nick’s got some power. The big thing with a two hitter is that you’ve got to put the ball in play to move that runner along. He can do it all. He can bunt. He can hit. Nick’s smart athletic and he understands the game.”

Morotti will hit third. Last season the junior hit .545, with 12 hits, 4 RBI and 16 runs scored. James will be the Wildcats clean up hitter. He hit .440 last season with 11 hits, 2 doubles, a triple, and 8 RBI. The Wildcats still have some figuring to do on the rest of the offensive lineup.

“Our strength will be our speed,” said Coach Pacheco. “We don’t have a ton of big boppers. We’re not going to hit home runs. But we got some guys with some power. James can hit for power, as can Morotti. Leary can hit it hard as well. Then we’ll have to rely on our speed, certainly, on the base paths.”