With six starters on a school trip to Greece, the Westport girls softball team took one on the chin as they lost to Diman 36-1 at home on Wednesday morning. The Wildcats fall to 1-2 in the Mayflower … 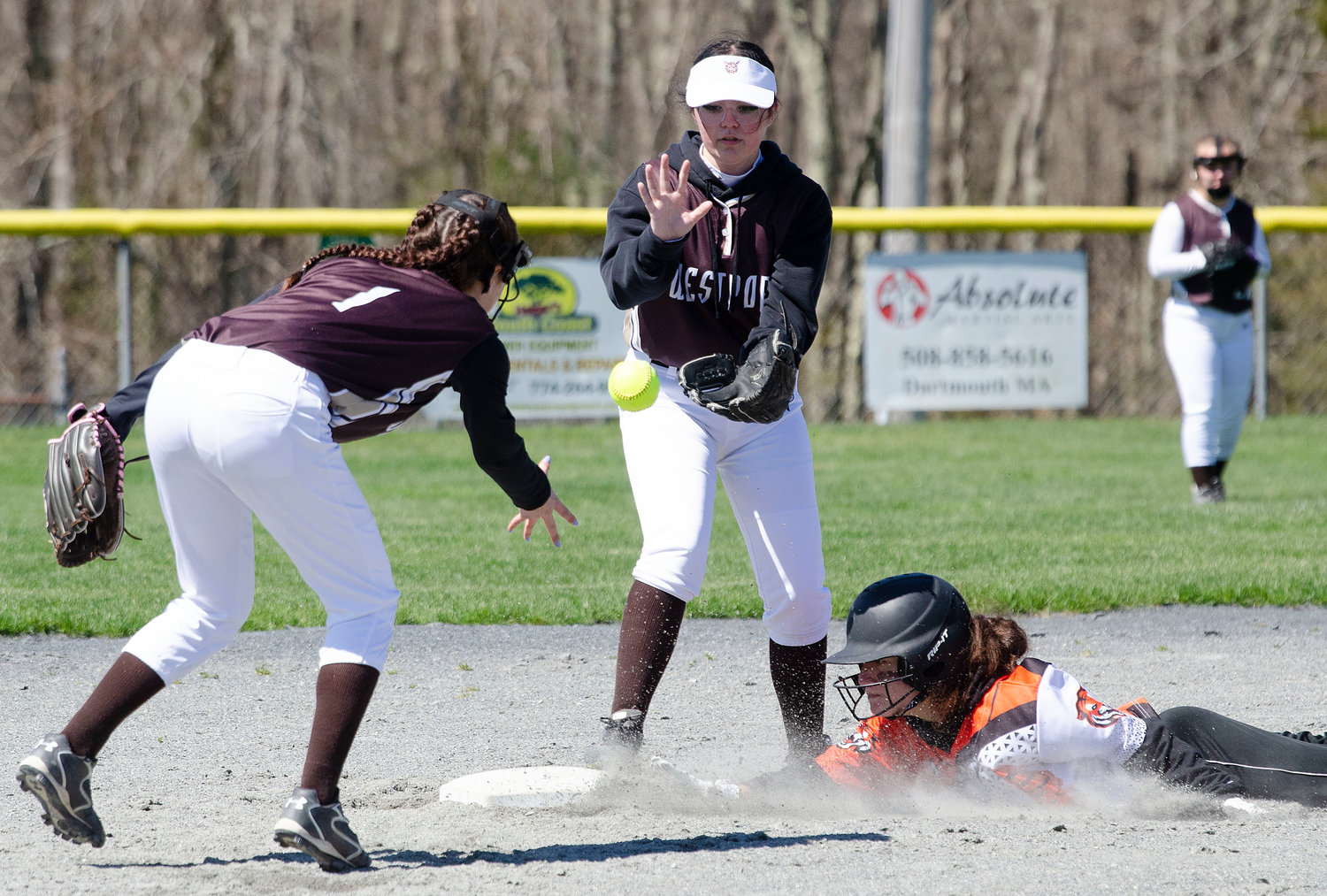 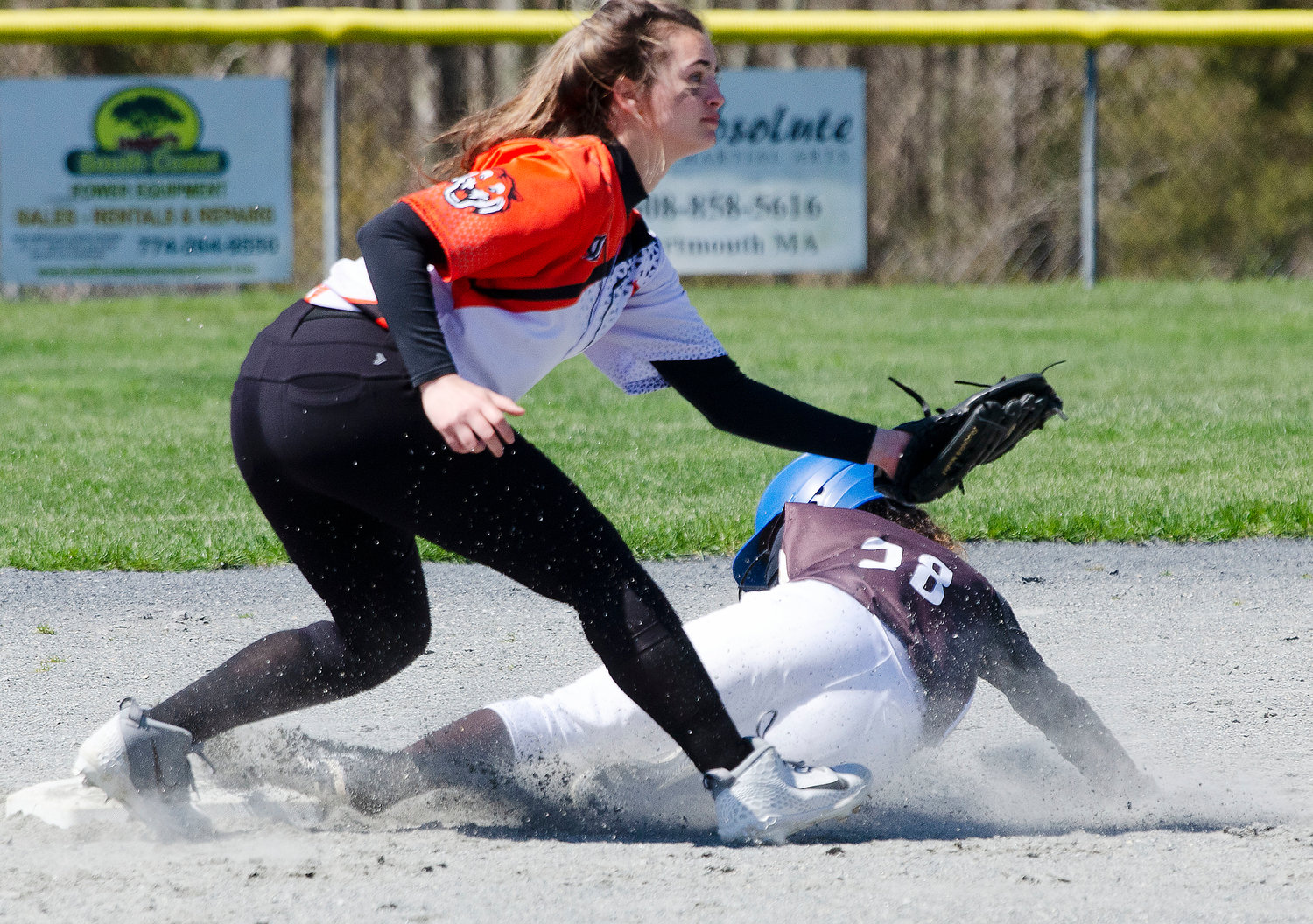 Tess Silvia slides safely into second base for a steal. 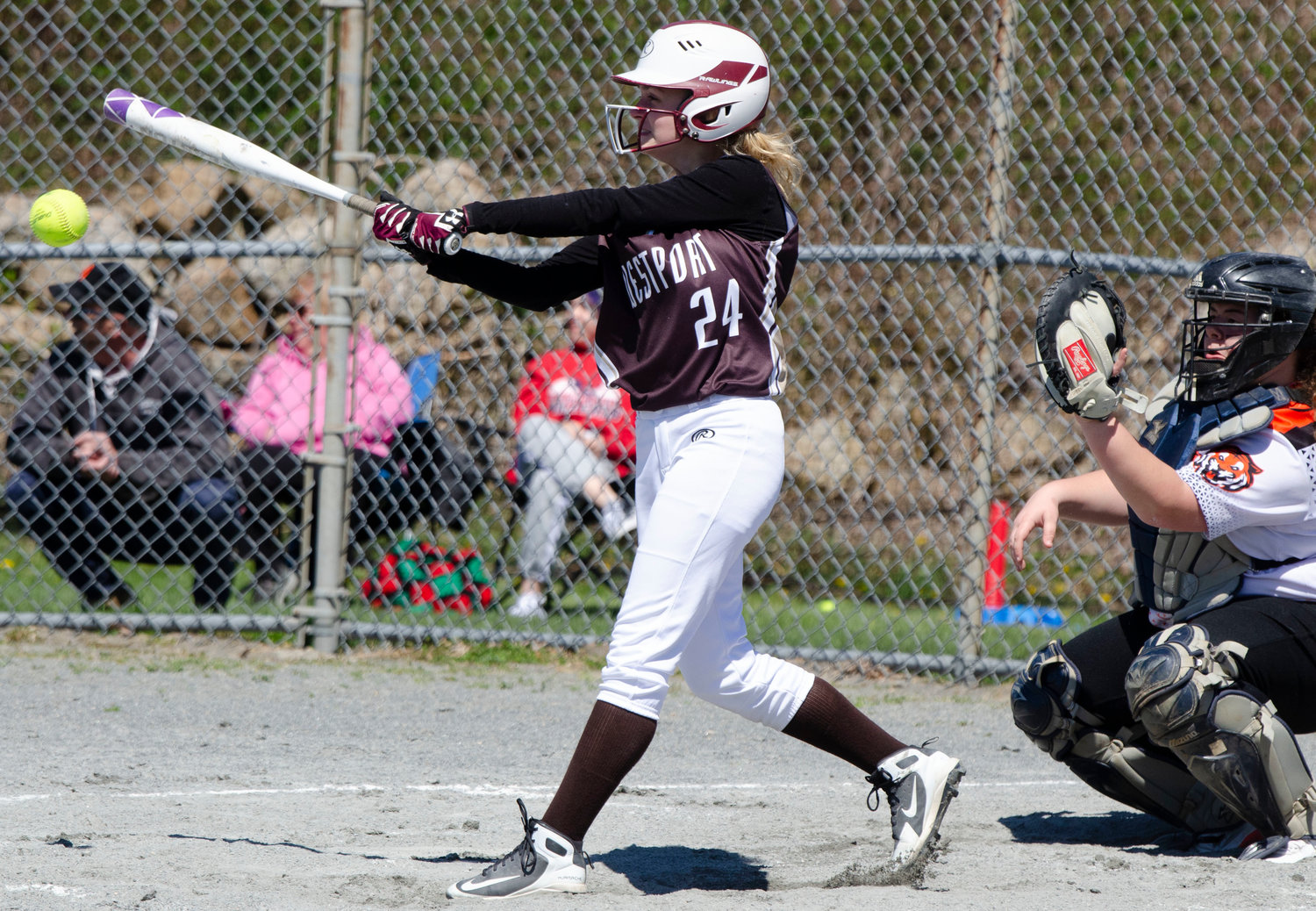 Paige Churchill hits a single to drive in Tess Silvia from second base to score the Wildcats only run. 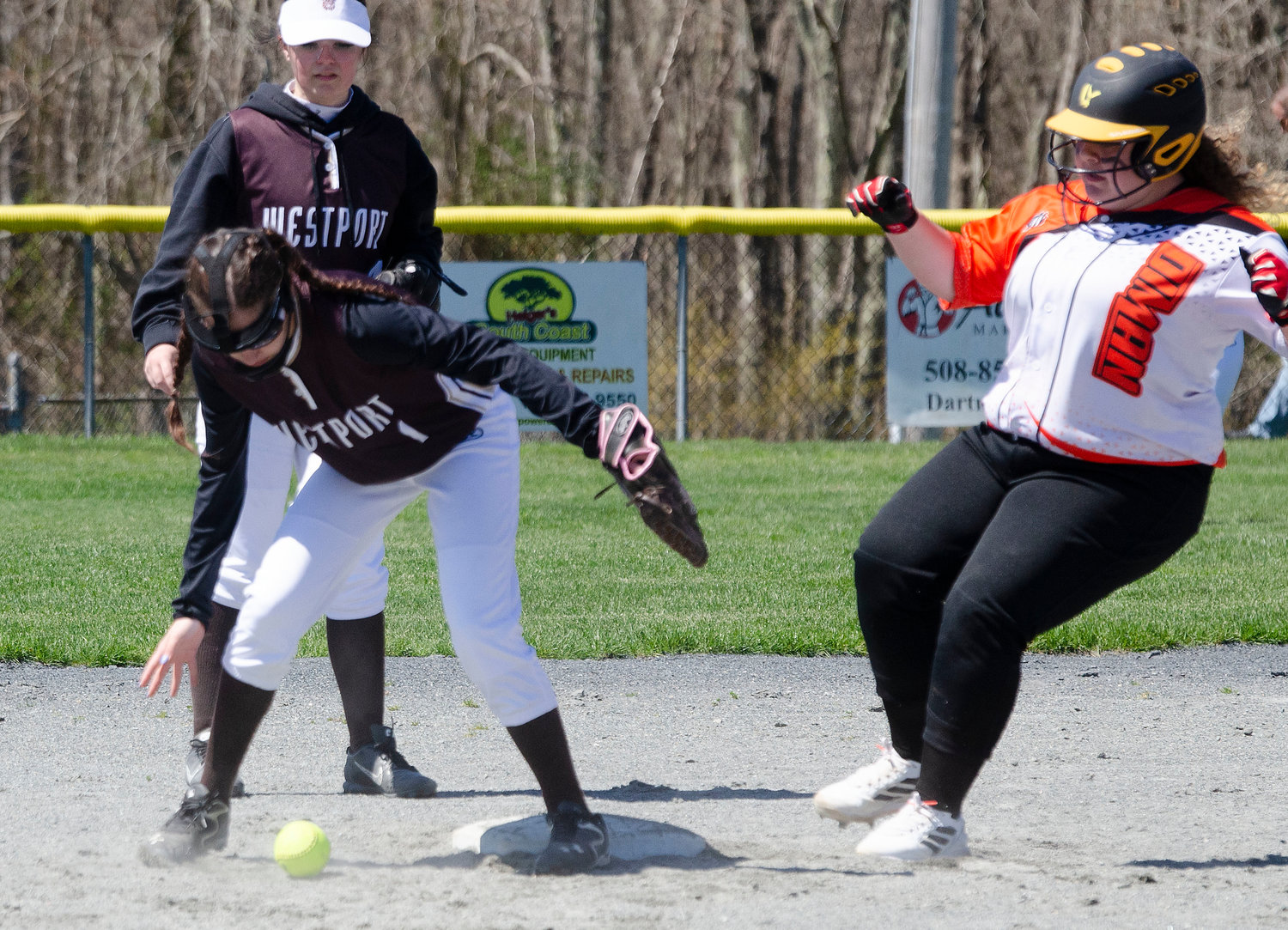 Shortstop Julia George fields a grounder up the middle with second baseman Isabel Berube as a Diman runner runs to second base. 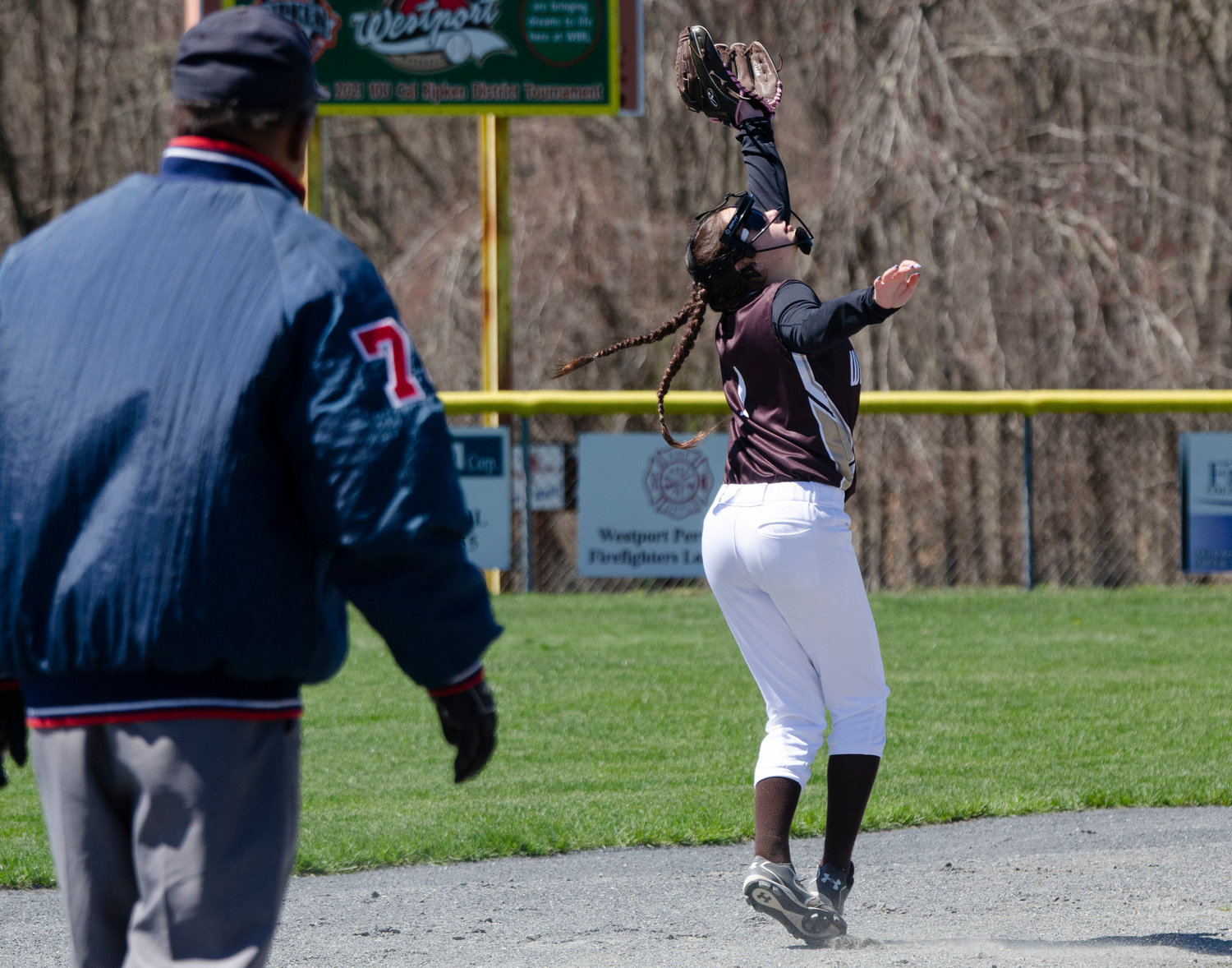 Shortstop Julia George ranges back for a pop fly. 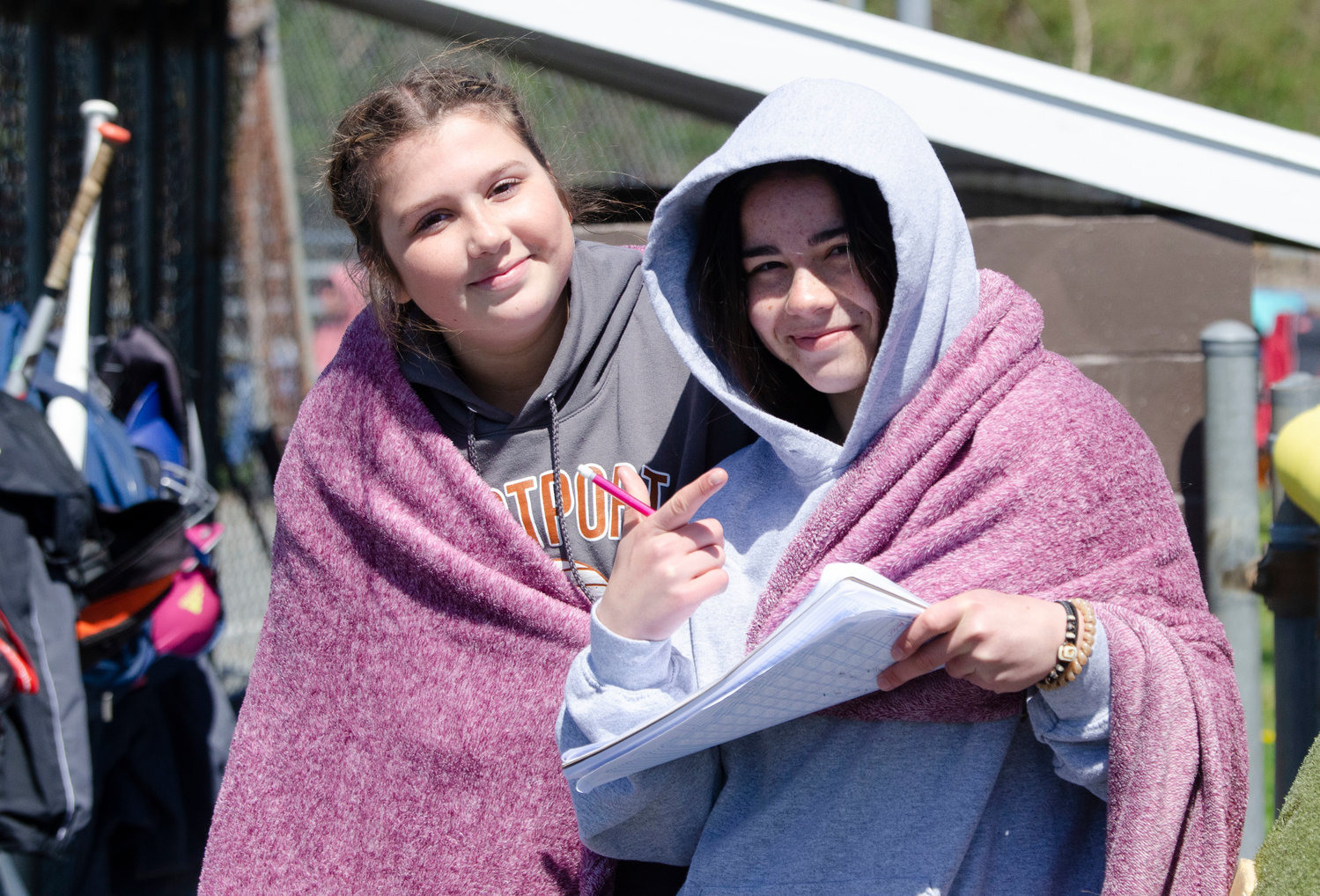 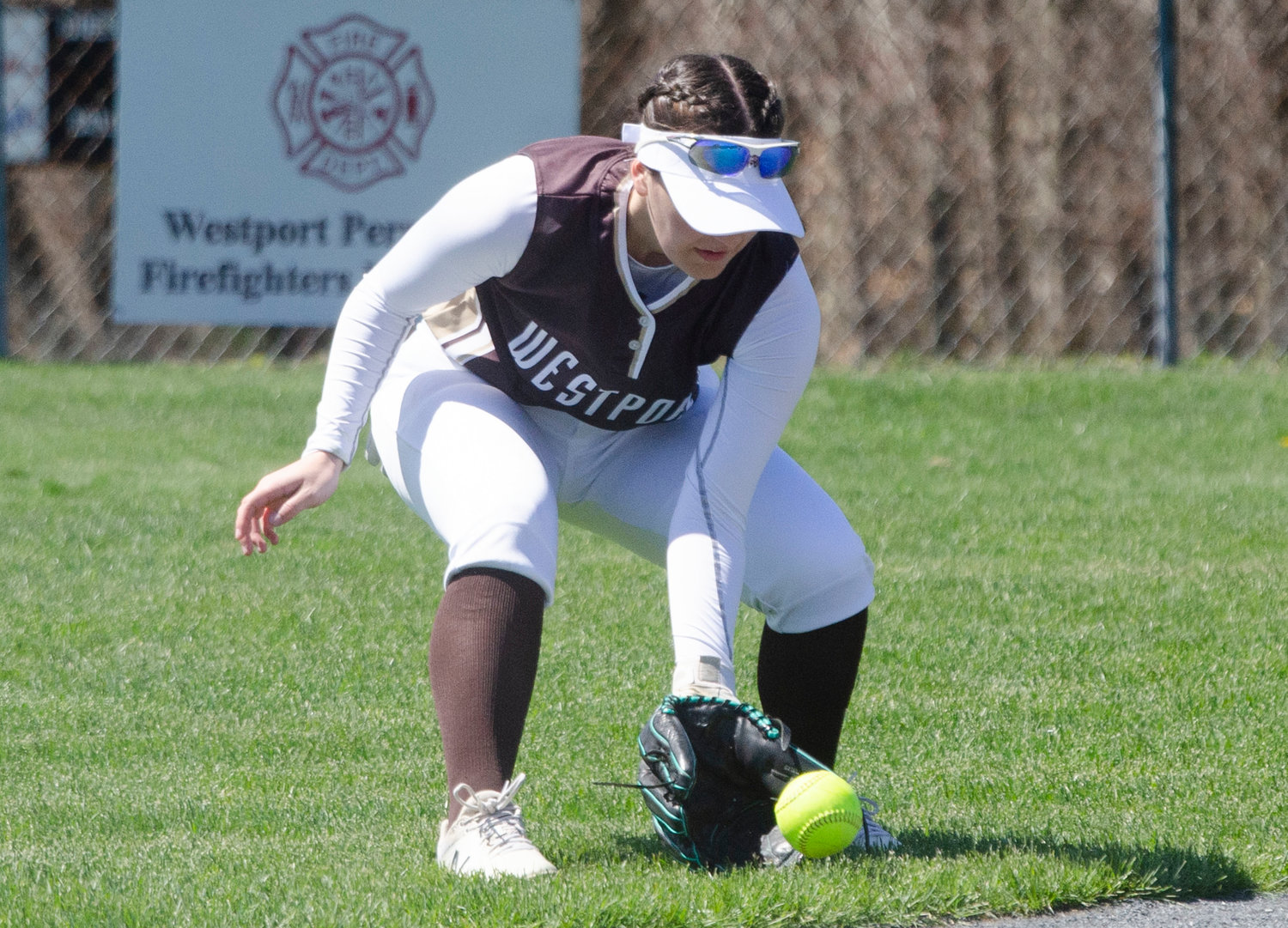 Left fielder Peyton Mahjoory scoops up a grounder that got by shortstop Julia George. 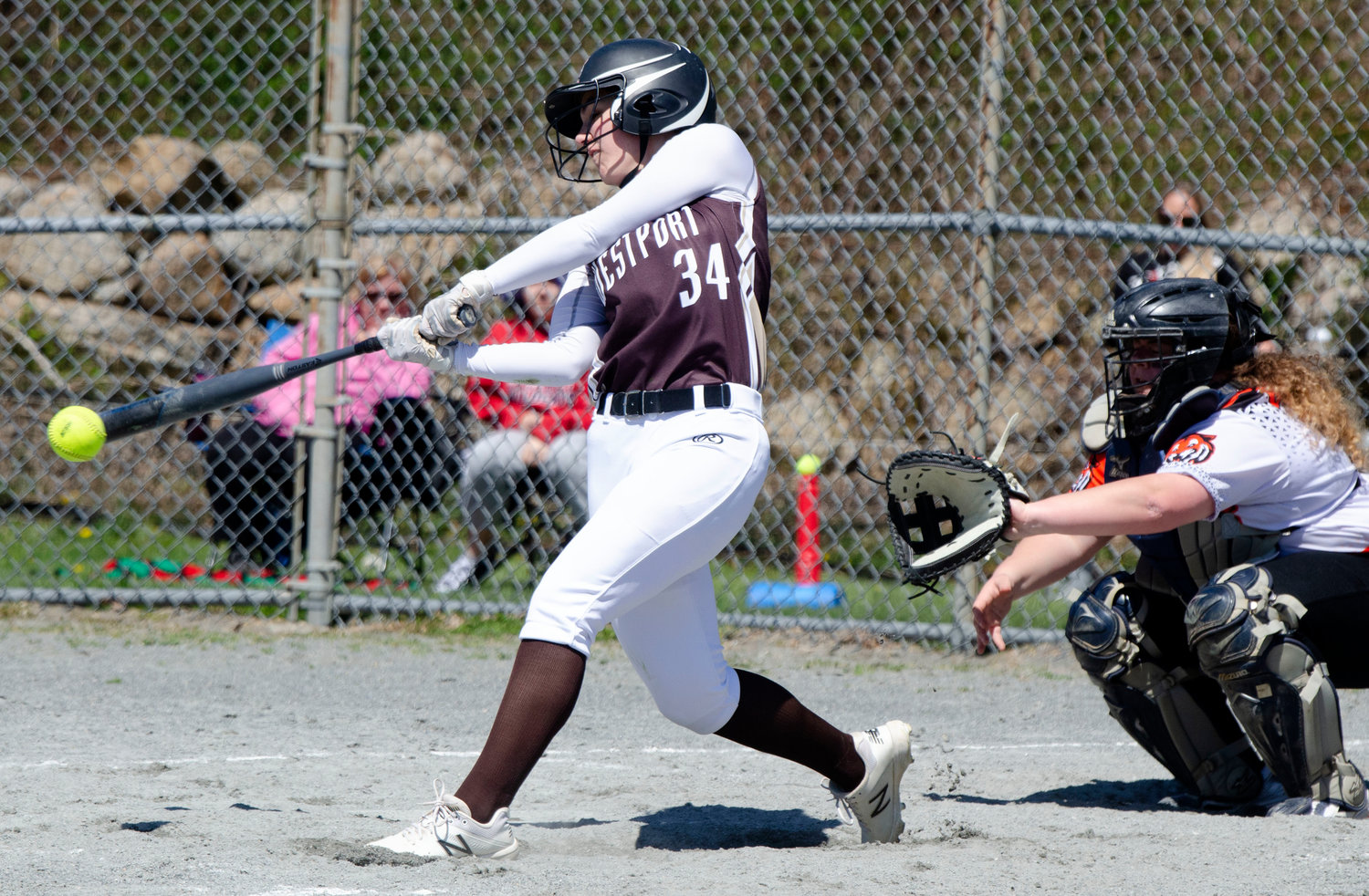 Peyton Mahjoory smashes a hit to left field during the game. 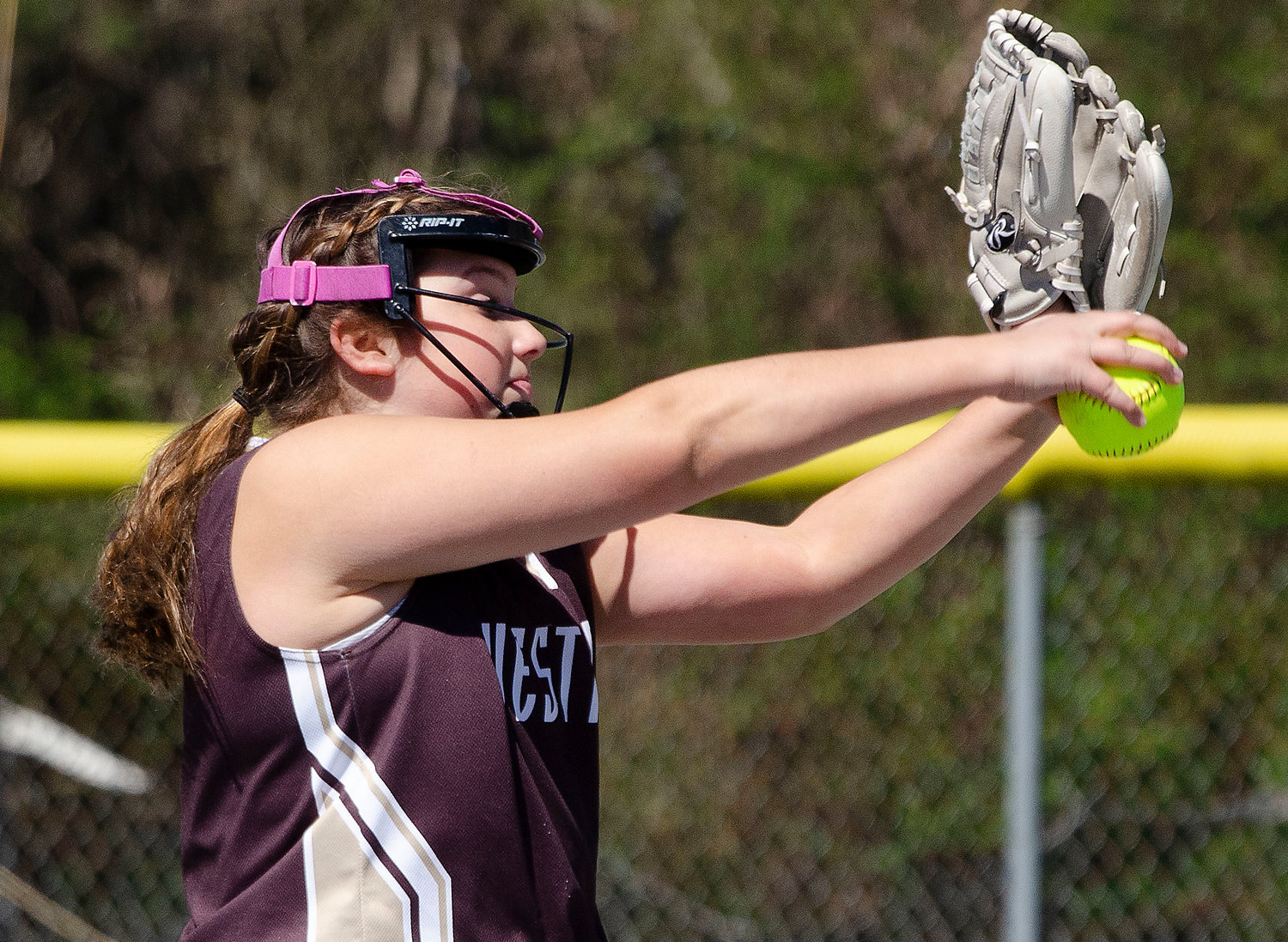 Freshman pitcher Mackenzie Ponte started the game for Westport, but came out in the third inning due to an injured wrist. 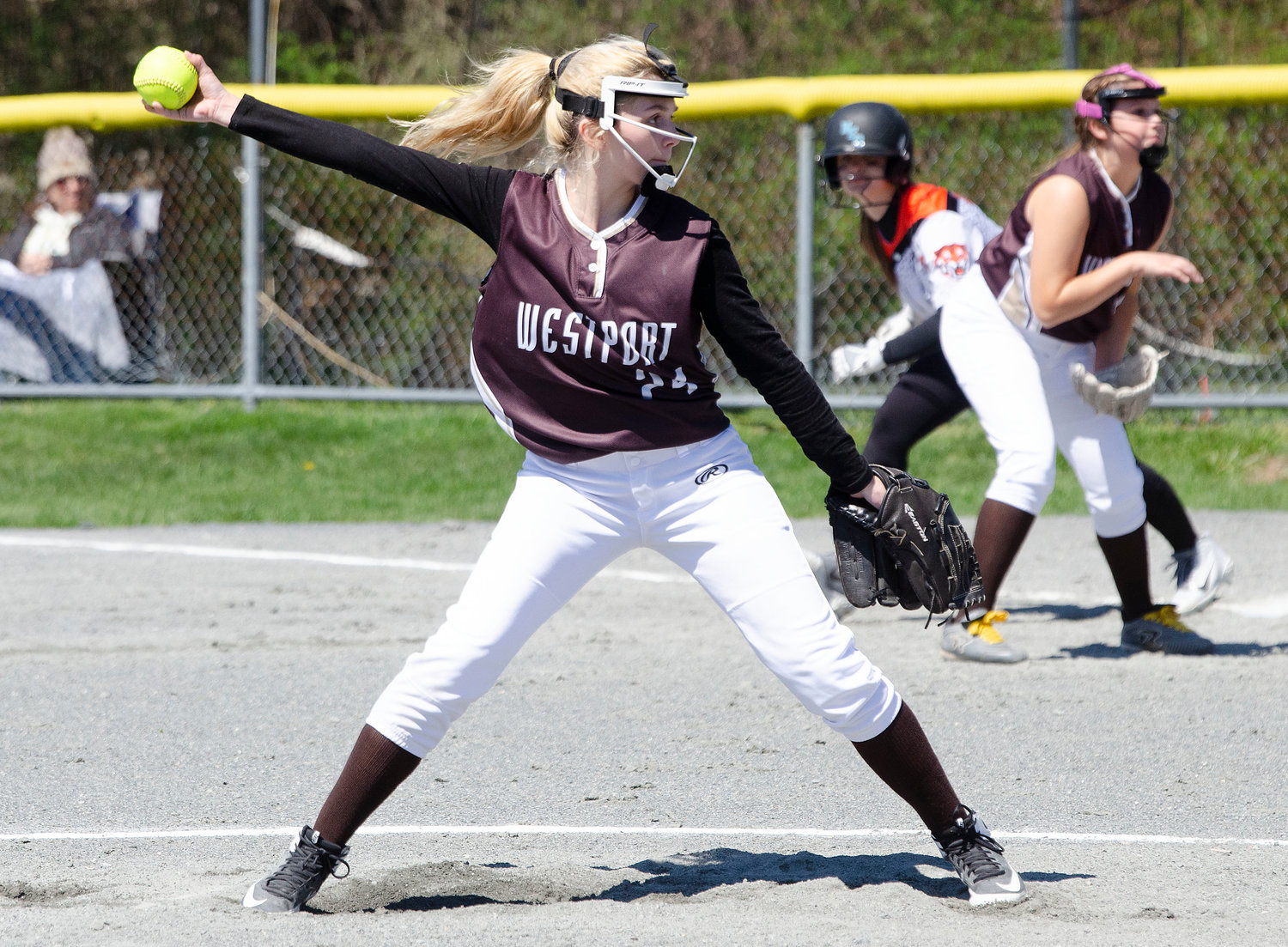 With six starters on a school trip to Greece, the Westport girls softball team took one on the chin as they lost to Diman 36-1 at home on Wednesday morning. The Wildcats fall to 1-2 in the Mayflower Athletic Conference with the loss. Westport struggled both offensively and defensively as the bench and junior varsity players were thrust into the lineup. Freshman pitcher Mackenzy Ponte threw well early in the game, giving up six hits and four walks for seven runs in the first two innings. Then the floodgates opened up for Diman in the third inning as the Bengals bashed two homers and plated 13 runs. The young righty struggled with her command as she kept rubbing her forearm between pitches. After the second homer, Ponte left the game with a sore wrist. Senior Paige Churchill came on in relief and threw strikes, but Diman kept hitting and the ball kept dropping. Diman bashed another homer and scored seven more runs in the fifth inning and overall collected 17 hits and 16 walks in the five inning game.

Offensively, Churchill drove in Tess Silvia to score the Wildcats only run.

Head coach Monique Jones said that Ponte should be fine.

“The trainer said to rest her wrist and ice it,” Coach Jones said. “It was a tough game but it was only one game. I was very proud of all the girls. Mackenzy worked so hard and Paige stepped up to get us out of the third inning and finish up the game.”

If Ponte isn’t ready to pitch in their game against Bristol Plymouth on Monday, Churchill may get the nod again. The quick right hander has a good glove and is a versatile player that Coach Jones can use at any position. Churchill captained the volleyball team last fall and played libero, the team’s defensive specialist.

“Paige will do anything to help the team, she is so selfless,” Coach Jones said. “She played first base for us instead of her usual second base with no questioned asked.”

If Coach Jones doesn’t get her players back from Greece, She may need the steady Churchill in the field and instead use senior Arianna Dos Vais or junior Peyton Mahjoory to pitch.

The Wildcats pounded Bishop Connolly 19-9 in Fall River on April 12 in their second game of the season.

Catcher Abbey Silvia led the Westport attack bashing five hits including a homer and a double and driving in six runs. Churchill smacked four hits, stole three bases and drove in four runs. Peyton Mahjoory smashed four hits with a double and drove in three runs and Tess Silvia and Sarah Perry each had three hits.

Defensively, Ponte struck out seven and pitched a complete game. Right fielder Braylin Montigny made several big plays for the Wildcats as did shortstop Jayda Pequita.