PORTSMOUTH — The Portsmouth Patriots played 47 minutes and 12 seconds of near-flawless, shutout defense during their bid for a Division II Super Bowl title against St. Raphael Academy at … 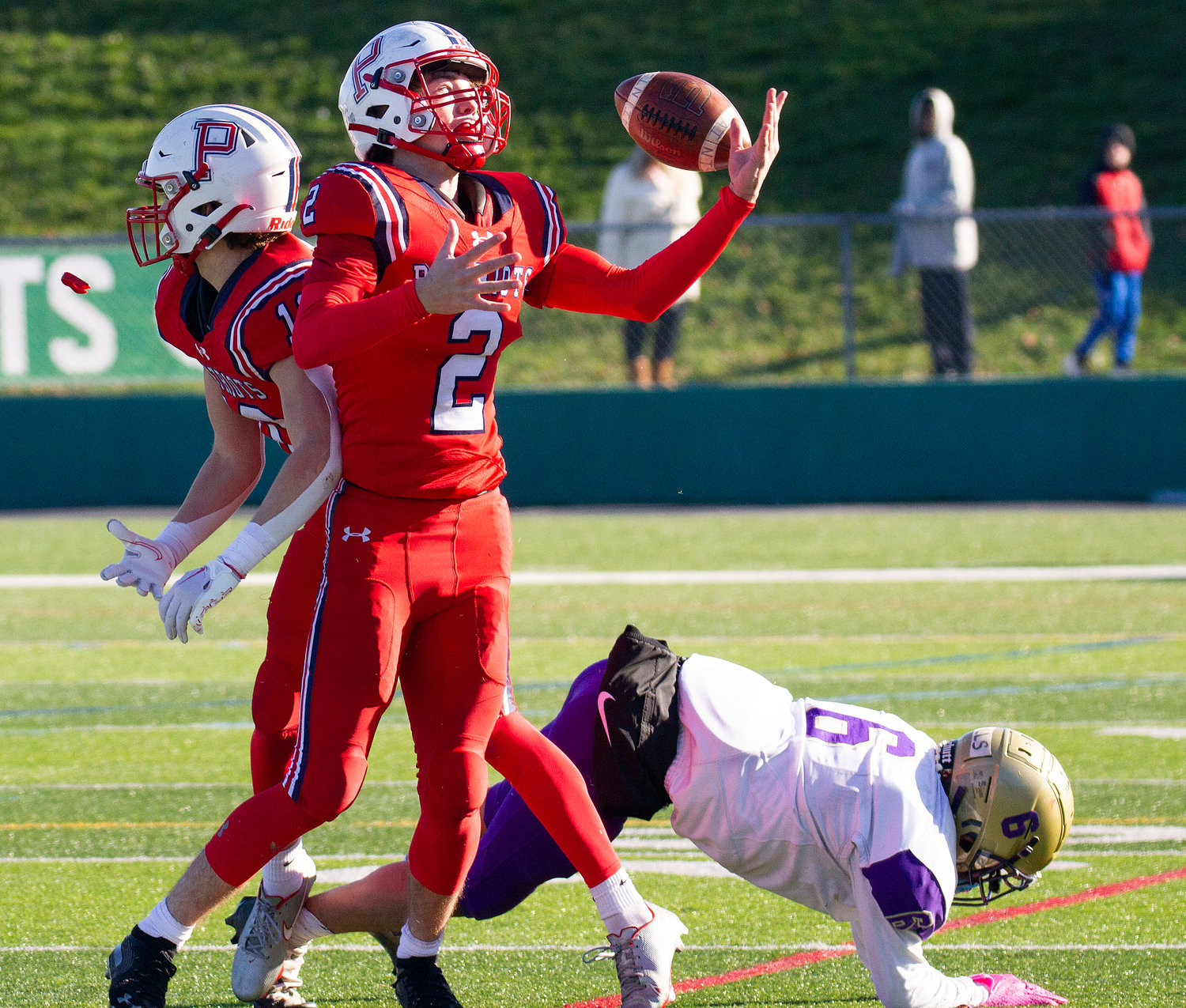 Portsmouth Patriots cornerback Tyler Hurd tips a pass from St. Raphael Academy quarterback Daniel Wulf that was intended for Damien Ocampo (right), in the fourth quarter of Saturday’s Division II Super Bowl at Cranston Stadium. Hurd, who doubled up on Ocampo with teammate Evan Tullson (No. 10), juggled the ball a few times before hauling it in for the interception. PHS couldn’t capitalize on the great play, however, and ended up losing by a touchdown with just 38 seconds left on the clock. The Patriots host Middletown for the annual Thanksgiving Day game at 10 a.m. on Thursday.
RICHARD W. DIONNE, JR. 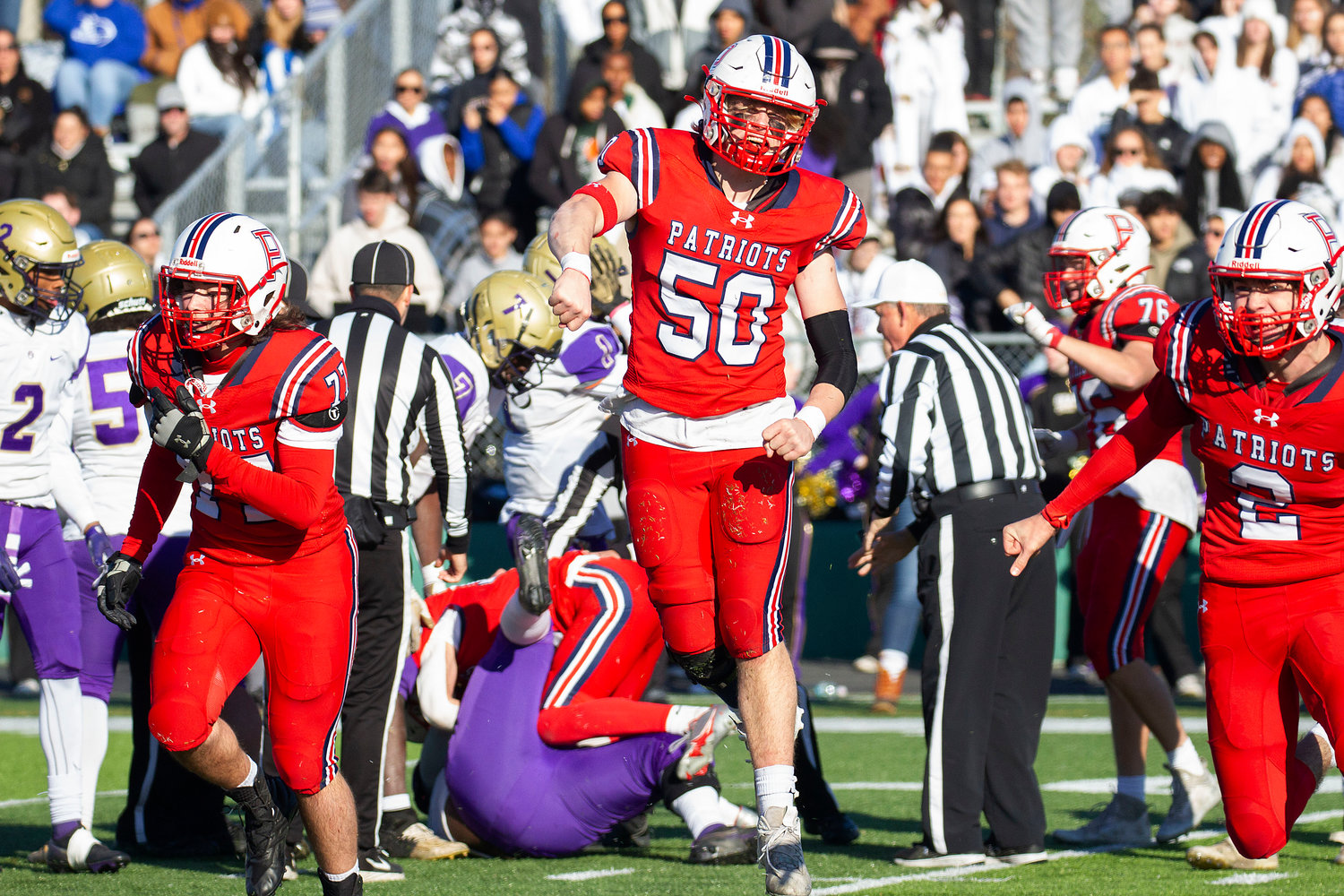 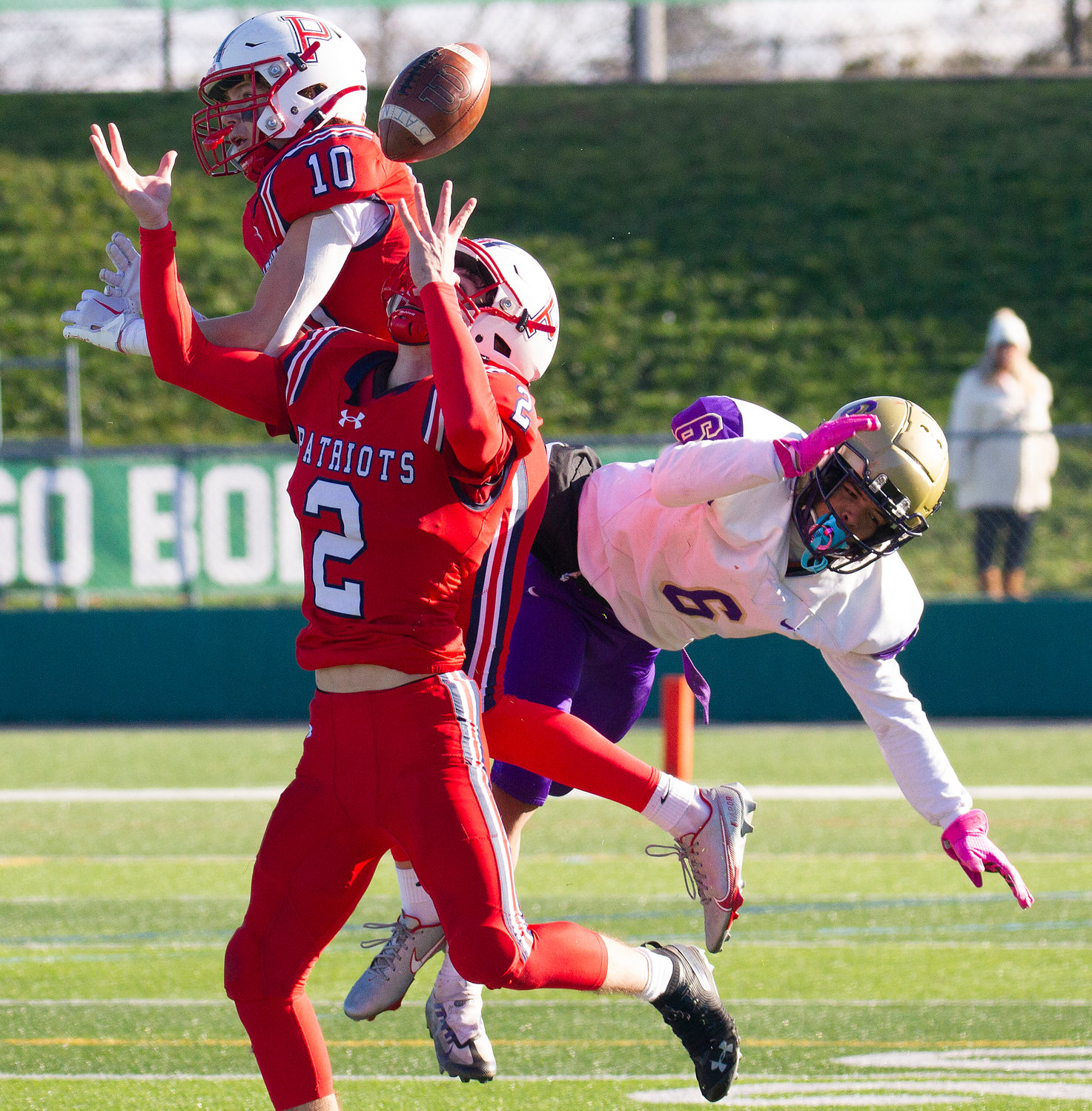 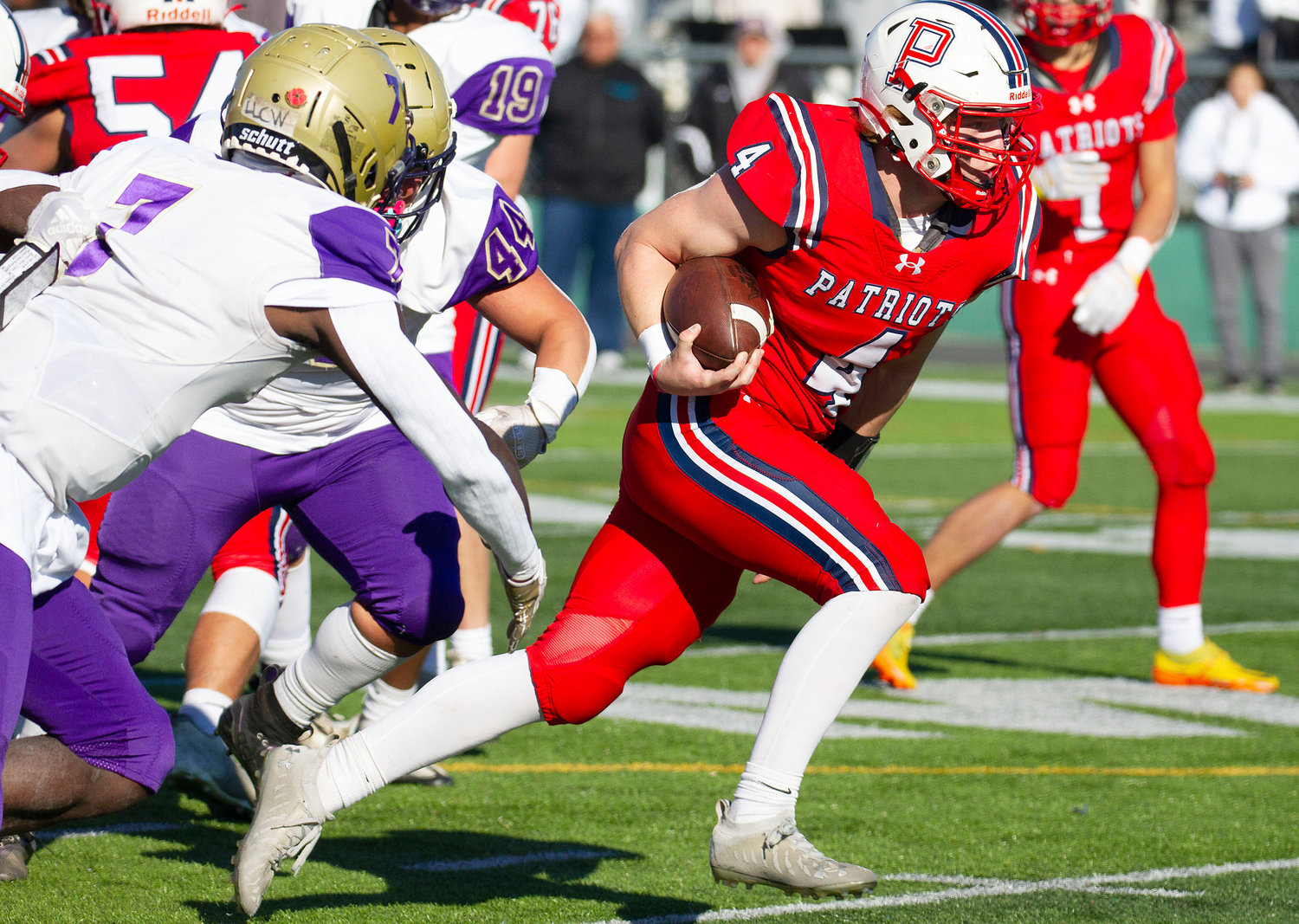 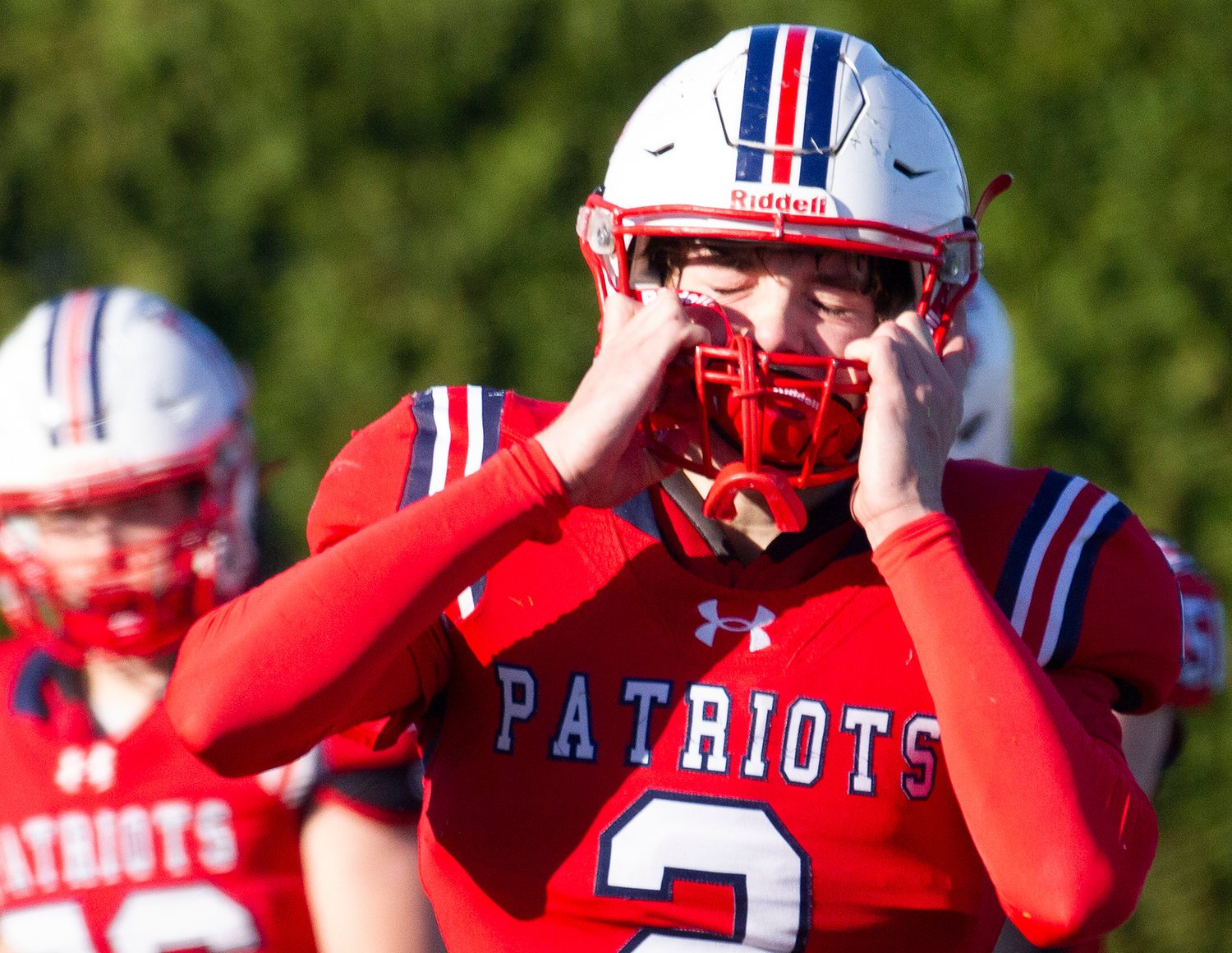 A frustrated Tyler Hurd pulls on his helmet after the loss.
RICHARD W. DIONNE, JR. 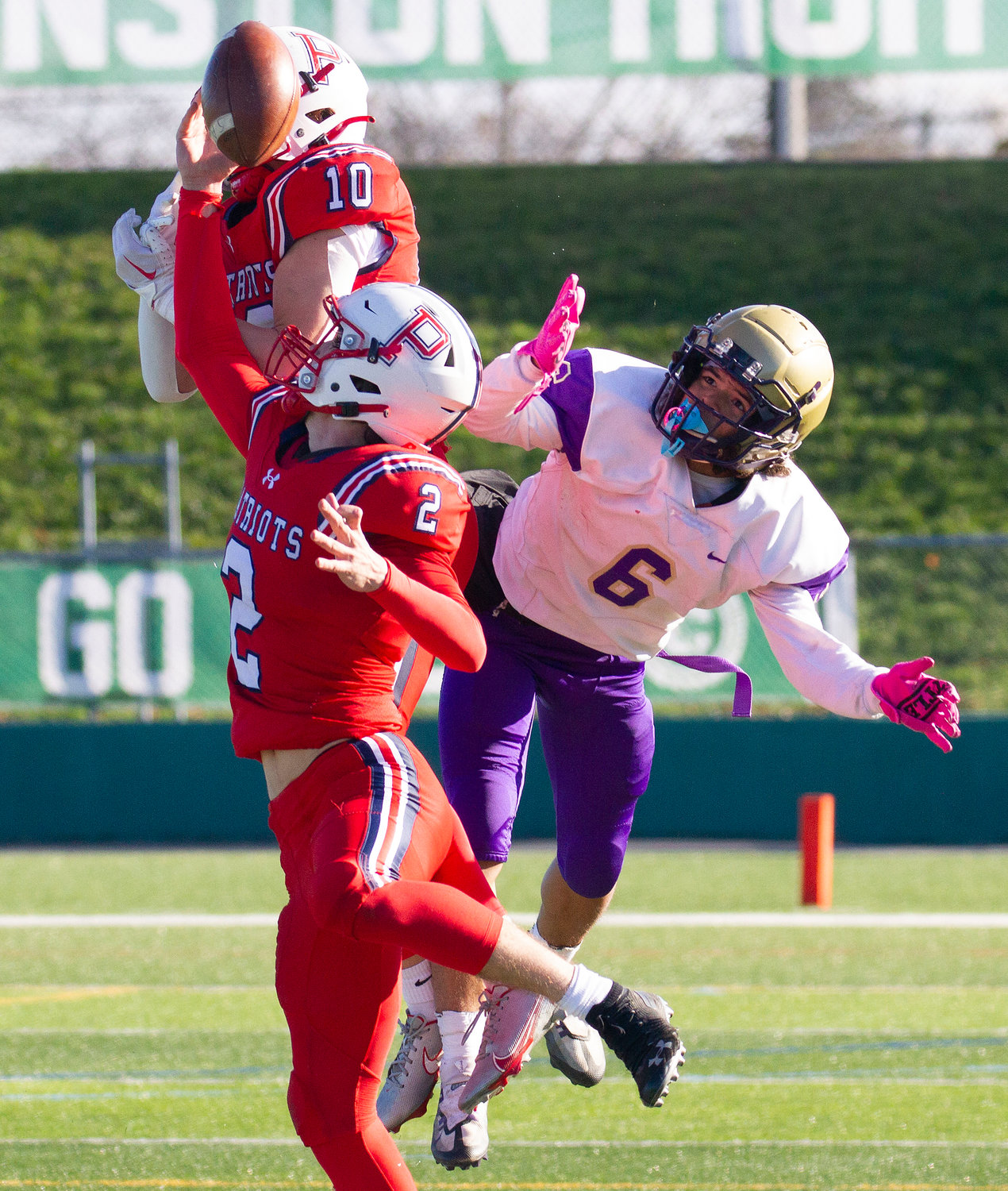 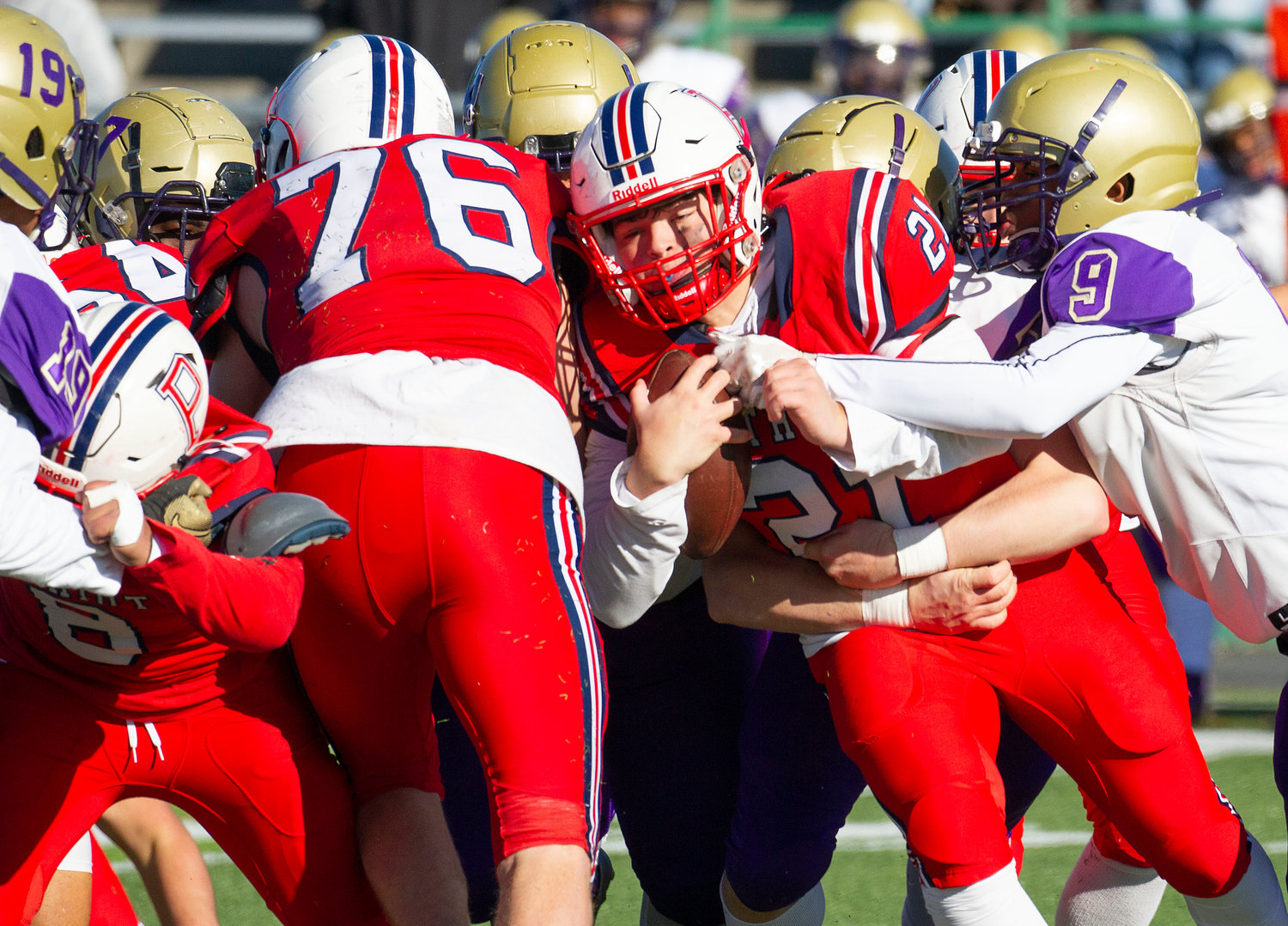 Running back Shane Harvey is stuffed as the Saints put eight in the box to stop the run in the first quarter.
RICHARD W. DIONNE, JR. 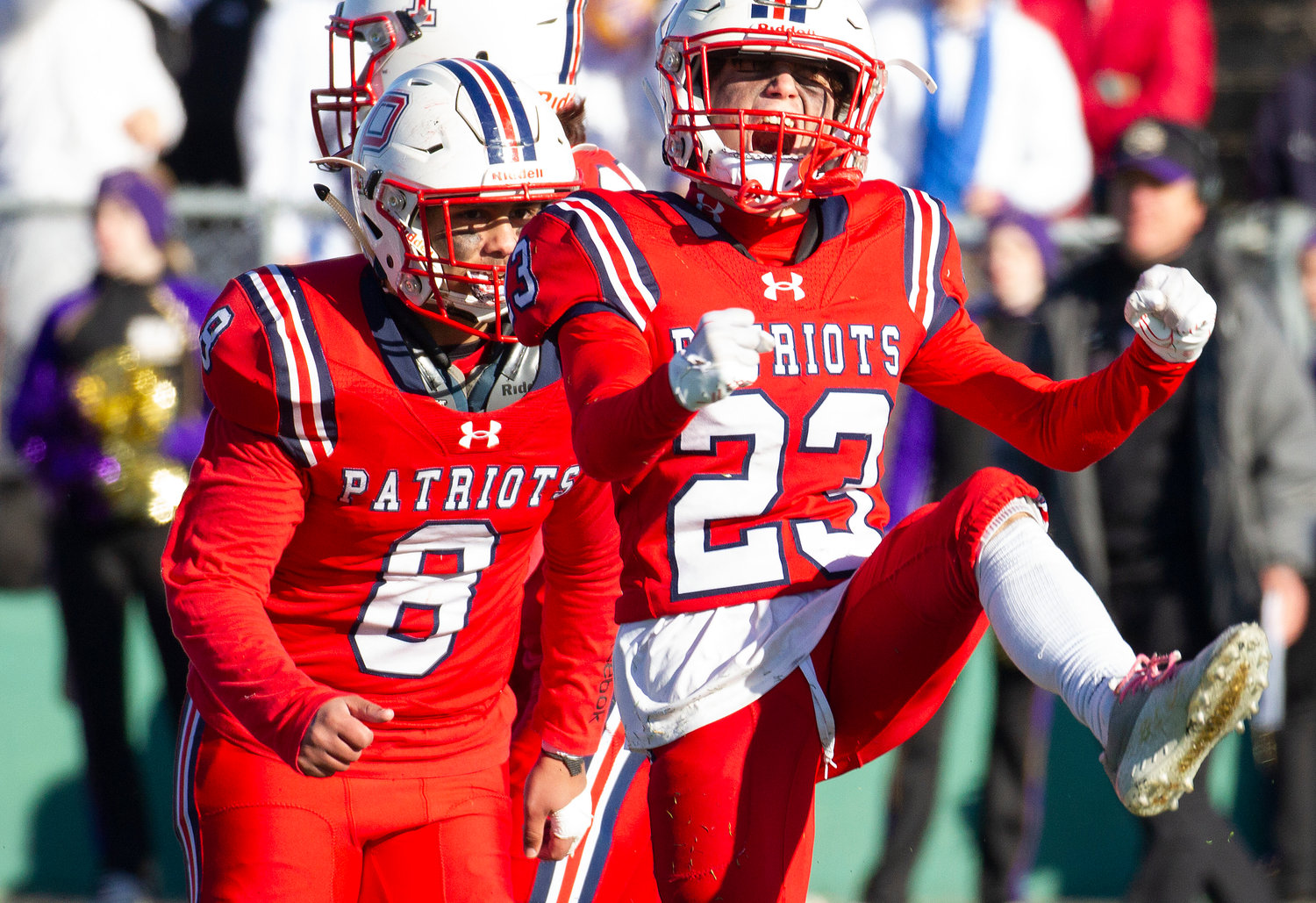 Sage Qaiser (left) looks on as defensive back Aidan Maisen celebrates his tackling of Aaron Julius for a loss in the third quarter.
RICHARD W. DIONNE, JR. 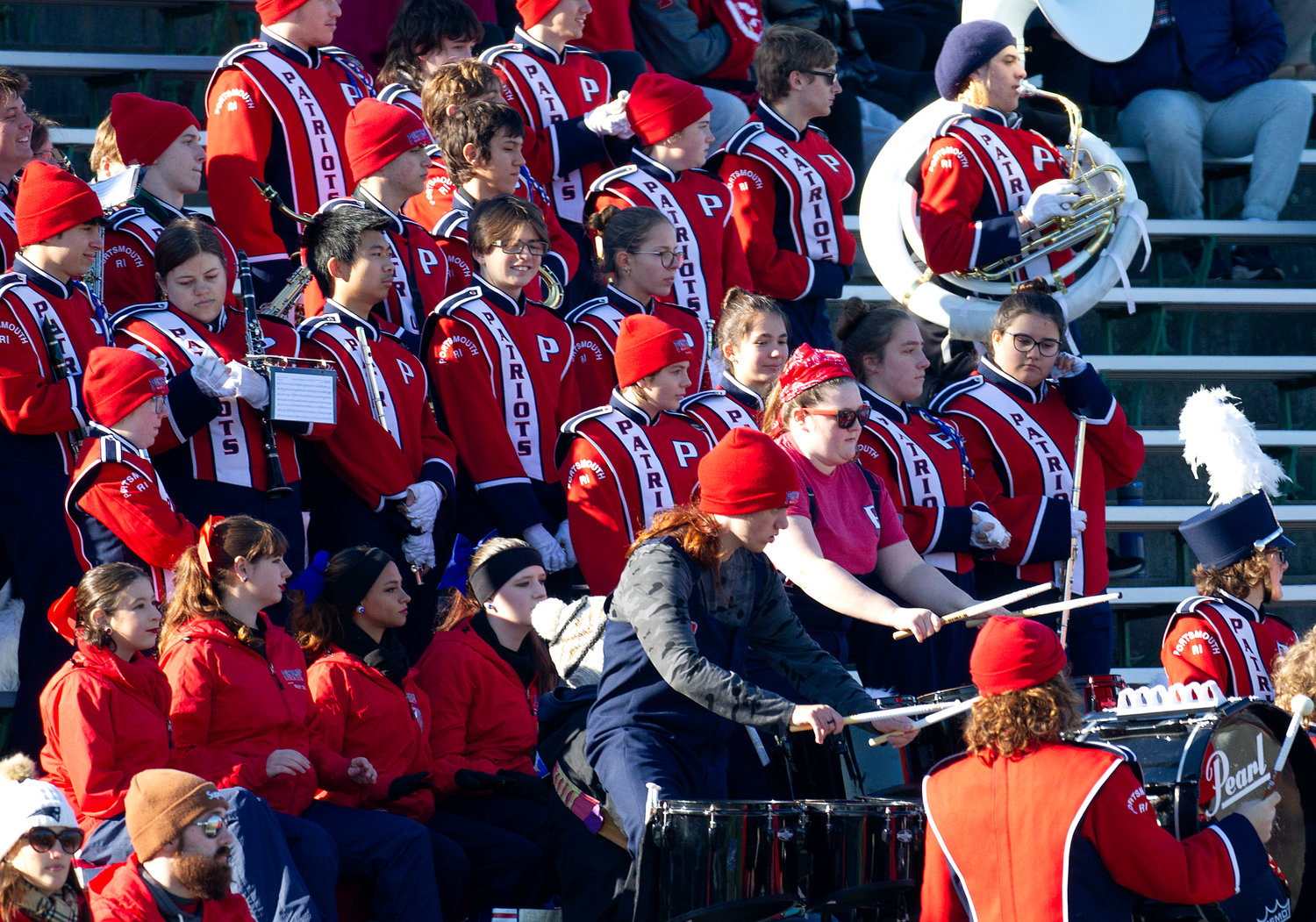 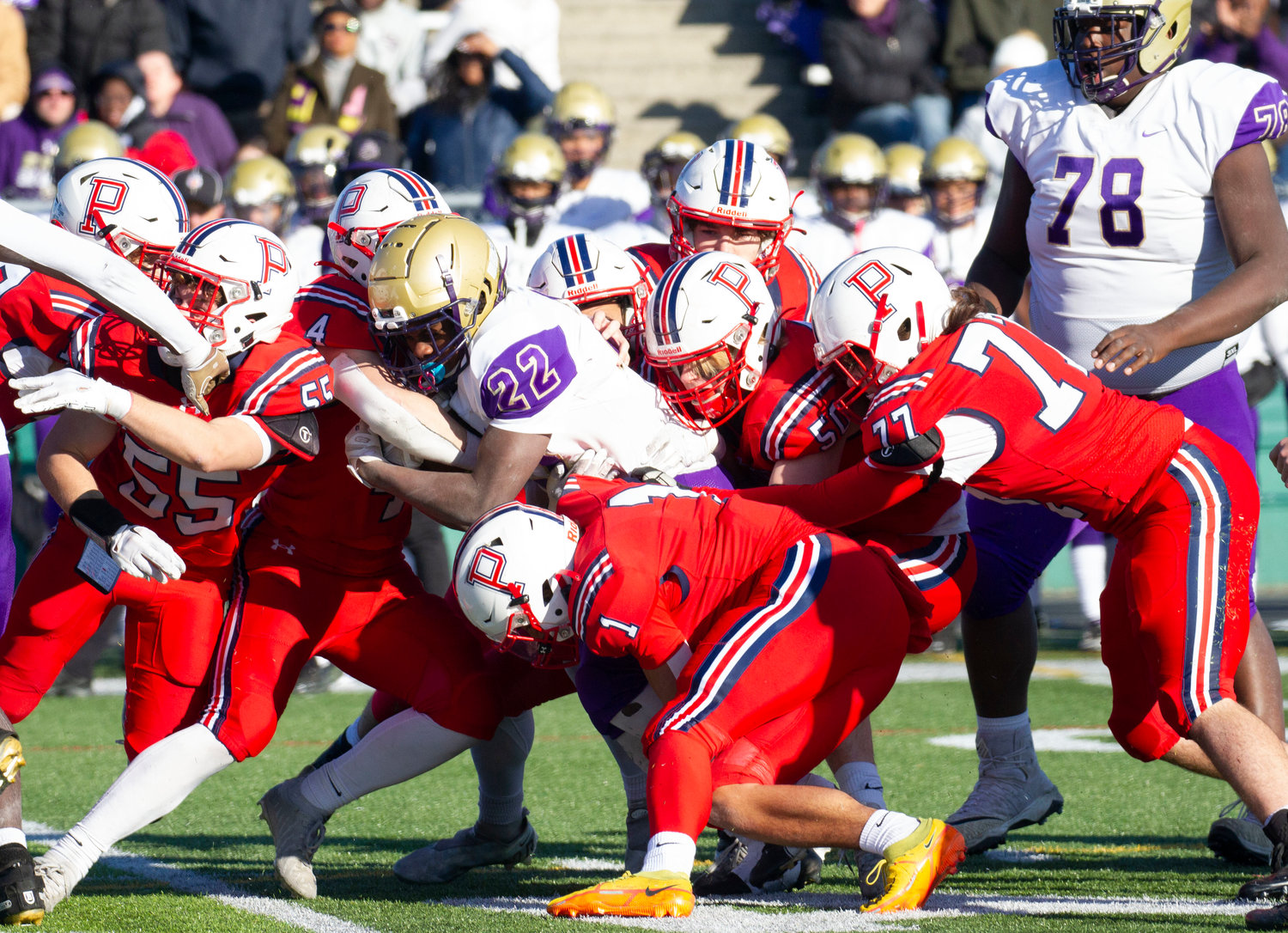 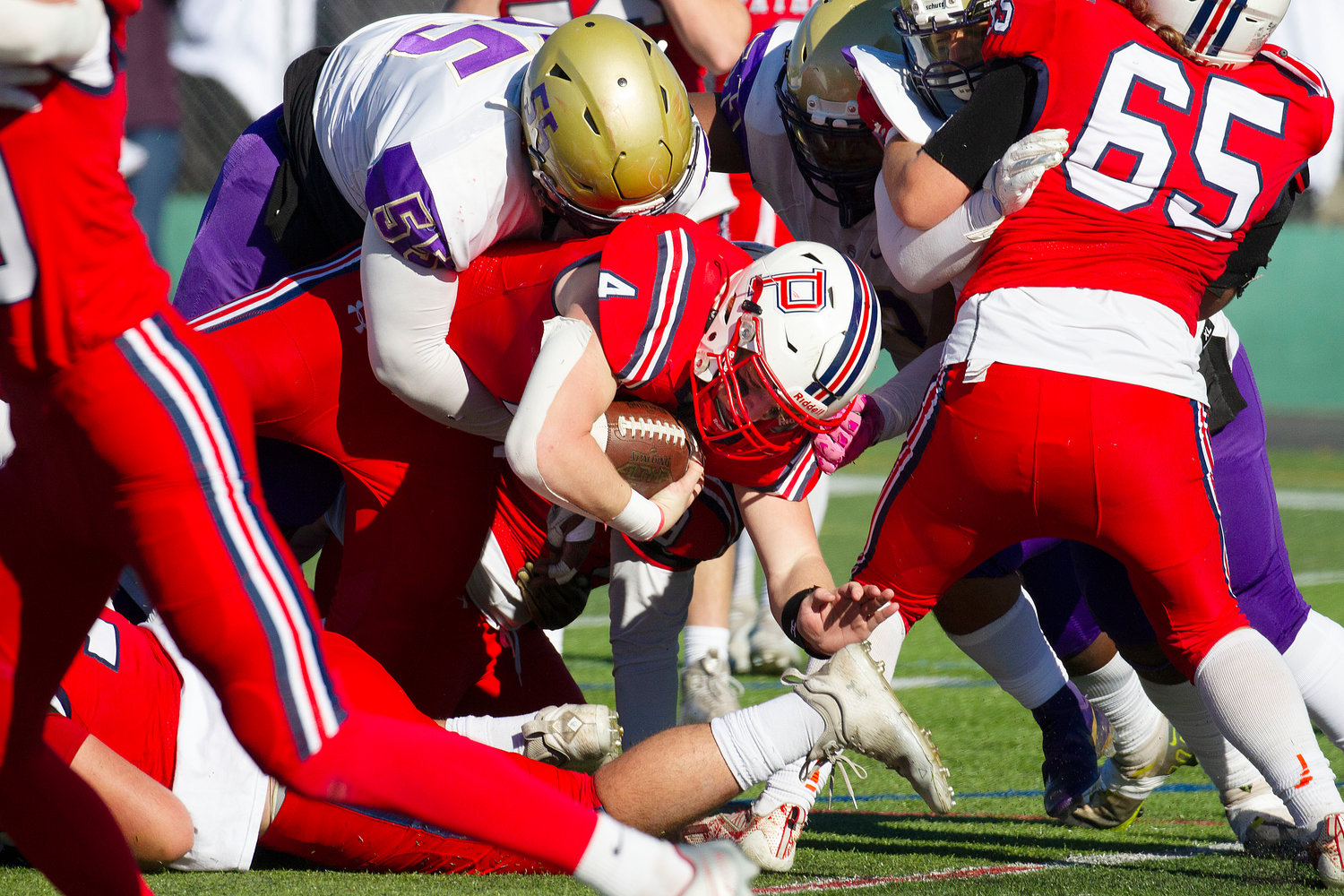 Quarterback Neal Tullson rambles up the middle as the Patriots head into Saints’ territory in the second quarter.
RICHARD W. DIONNE, JR. Emily Toner performs during halftime along with the other PHS cheerleaders.
RICHARD W. DIONNE, JR. 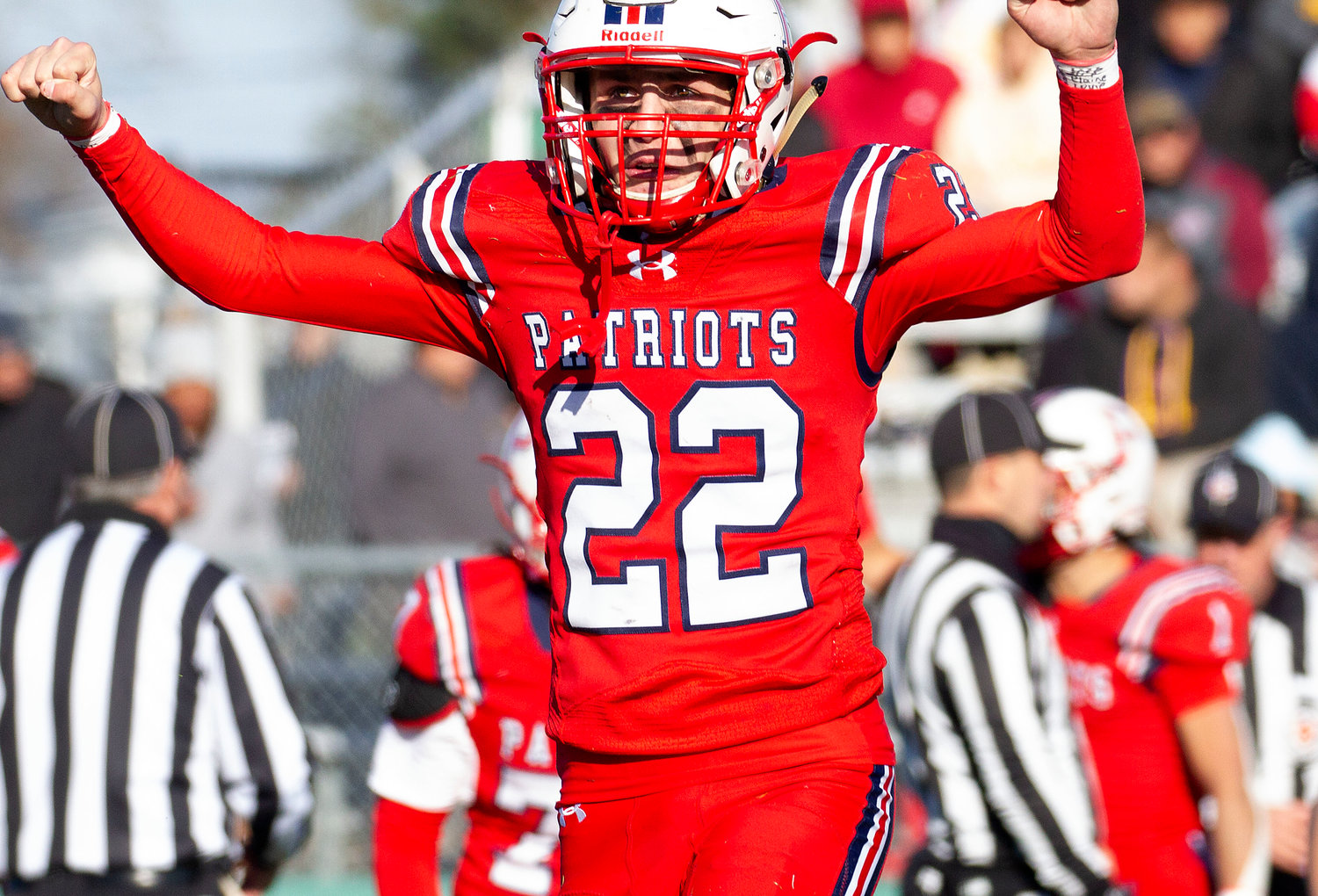 Dylan Brandariz (middle) and others celebrate after the Patriots seemingly recovered a Saints fumble late in the game, clinging to a 3-0 lead. The referees ruled the runner was already down, however, which kept the drive alive.
RICHARD W. DIONNE, JR. Carson Conheeny (No. 1), Trey Delemos (No. 59) and others congratulate Tyler Hurd (middle) after he made an impressive fourth quarter pass interception.
RICHARD W. DIONNE, JR. Ben Blythe (No. 77) and others gang tackle the Saints’ big running back Moses Mues in the fourth quarter.
RICHARD W. DIONNE, JR. Defensive back Aidan Maisen makes a big stop on third down in the third quarter.
RICHARD W. DIONNE, JR. PORTSMOUTH — The Portsmouth Patriots played 47 minutes and 12 seconds of near-flawless, shutout defense during their bid for a Division II Super Bowl title against St. Raphael Academy at Cranston Stadium on Saturday.

Which makes the final result — a 7-3 Saints win thanks to a touchdown pass with just 38 seconds left in the game — such a bitter pill to swallow.

“It's a little bit gut-wrenching, this one, because you're feeling pretty good all the way up until the last drive,” Portsmouth head coach Dustin Almeida said after the game. “But you’ve got to give (St. Ray’s) credit. They made more plays at the end.”

After a scoreless first half, the Patriots went ahead 3-0 on George Smith’s 22-yard field goal with 1:20 left in the third quarter.

That drive had started at the Patriots’ own 46, and featured several good runs by Adam Conheeney, including a 17-yard scramble and then a nine-yard gain on fourth-and-1 to give the Patriots a first down. Quarterback Neal Tullson also kept the ball for a 16-yard run to the 7-yard line.

Later, in the fourth quarter, a spectacular interception by the Patriots’ Tyler Hurd gave Portsmouth a short field with a good chance to ice the game. It came just after St. Raphael’s Moses Meus caught a 23-yard pass to put the Saints at Portsmouth’s 48-yard line.

St. Ray’s attempted another pass, but Hurd tipped the ball and, after juggling it a few times, kept possession and ran it to the Patriots’ own 35-yard line. Despite the incredible play, however, Portsmouth couldn’t capitalize and punted after going three and out.

During the next Saints’ possession, Meus seemingly fumbled the ball on third down, and Evan Tullson jumped on it at the Patriots’ 45. Portsmouth players started celebrating a turnover, but the referees ruled that Meus still had possession of the ball when he hit the ground and awarded the Saints a first down.

No matter, Portsmouth’s smothering defense prevented the Saints from converting on fourth-and-two, and the Patriots took over on downs. Portsmouth’s drive didn’t go anywhere, however, and Smith had to punt.

Unfortunately, the ball went off the side of his foot as he booted it into the wind, and went out of bounds to the right, setting up St. Ray’s at the Portsmouth 43-yard line.

Benefiting from the short field, the Saints staged an impressive drive featuring catches by Ethan McCann-Carter and runs by Aaron Julius. McCann-Carter ended up catching the seven-yard TD pass from quarterback Dan Wulf.

After getting the ball back, Patriots’ quarterback Tom Hurd’s arm was hit by a Saints defender and his wobbly pass was intercepted by Meus. Wulf took a knee to end the game.

Despite the gut-wrenching loss, Almeida said his defense turned in an excellent performance, while also tipping his hat to the Saints.

“They  took advantage of the situation. It came down to us having to pitch a shutout. They scored within the last minute. The defense was awesome today against a really talented group of kids. They kept scrapping, kept making plays and they caused turnovers. The guys played hard; I'm proud of them. I thought they were excellent the whole game.”

Almeida said he didn’t expect a high-scoring game with the two defenses on the field. “I just thought we were going to have more points than this,” he said.

Getting to the championship game was a feat itself for the Patriots, who sustained several key injuries this season and got off to a poor 1-3 start.

“It's just the group of kids that we have that kept us going,” Almeida said. “When you get guys like that — really good kids, really good families and the support that you have from the community — it feels good when you have that stuff in place and you have all the people behind you even when things are bad. It’s not insurmountable. That's what we do. We’re a family.”

Portsmouth will host Middletown for the annual Thanksgiving Day game at 10 a.m. this Thursday. The Islanders played in the Division III Super Bowl in Cranston immediately after Portsmouth, but they also lost, 13-7 to Moses Brown.

Almeida said he has high hopes for the Patriots next season.