Westport resident Joe Moniz has made learning a trade the law in his household. The last seven of his 10 children have gone to Diman Regional Vocational Technical and his youngest, Gloria, an … 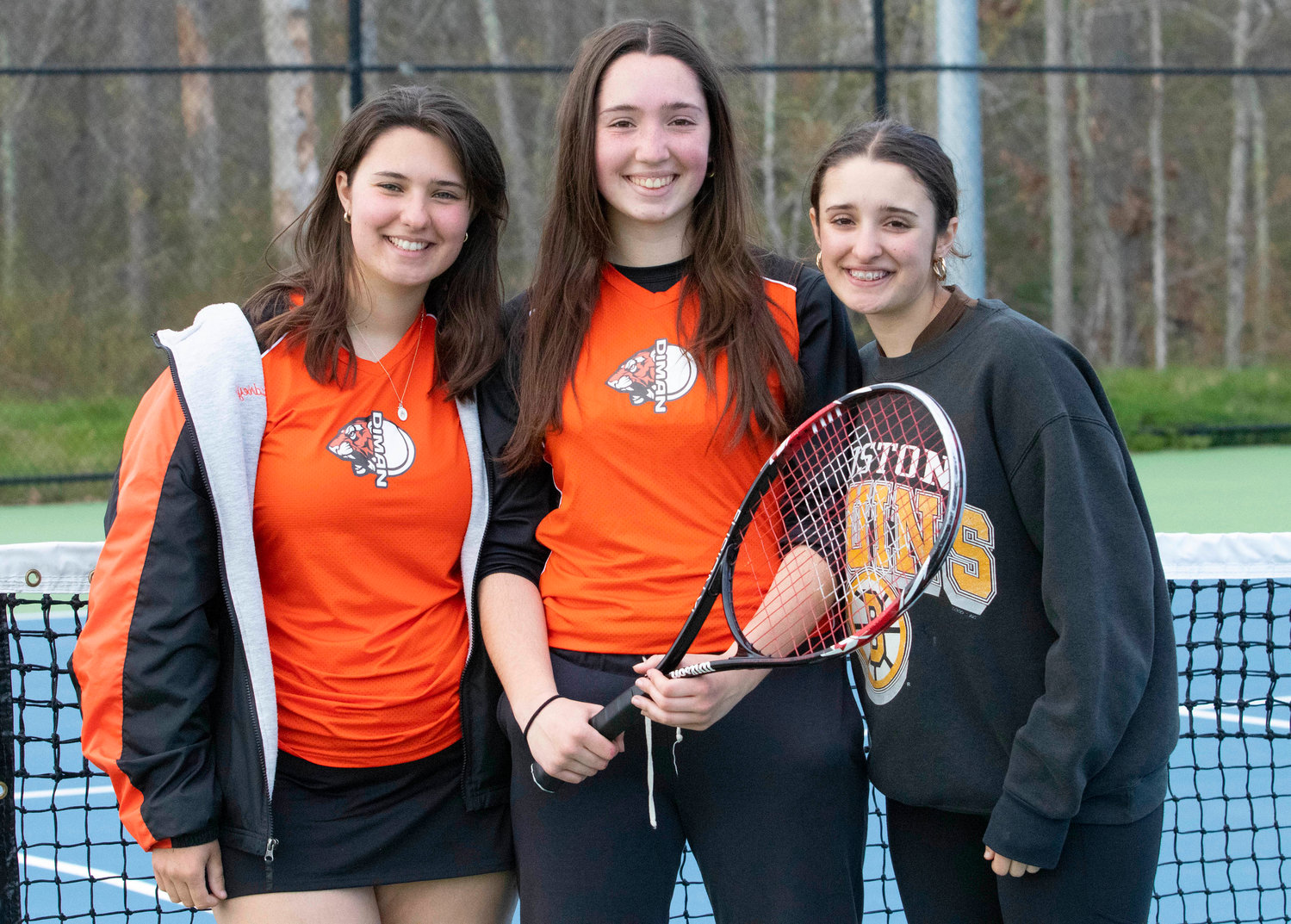 Sarah Moniz (left) and sisters Lindsey and Gloria during a match between Diman and Westport at Westport High School this spring.
Photos by Richard W. Dionne, Jr. 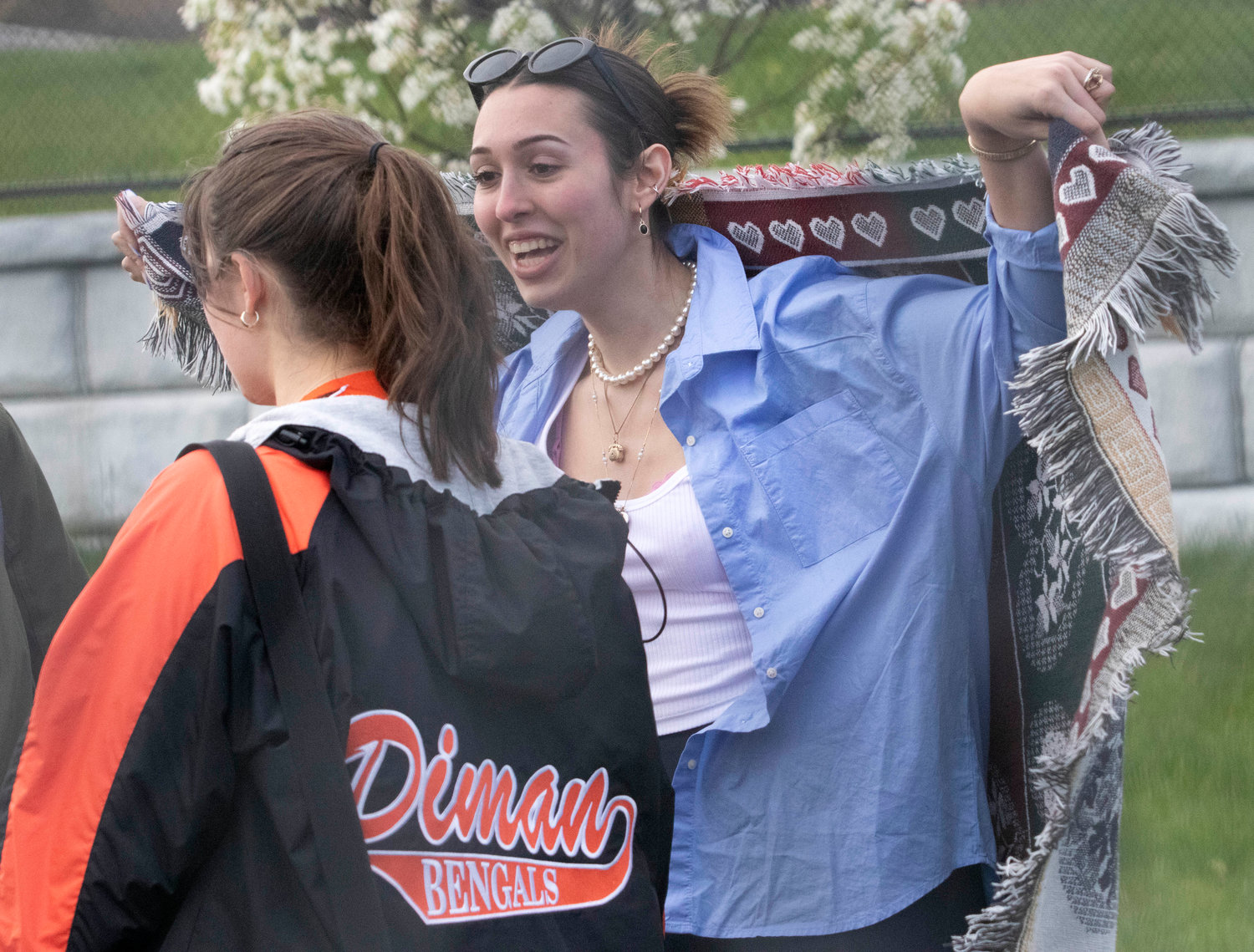 Emily Moniz (right) shares a laugh with her sister, Sarah after a Diman vs Westport tennis match in Westport this spring. 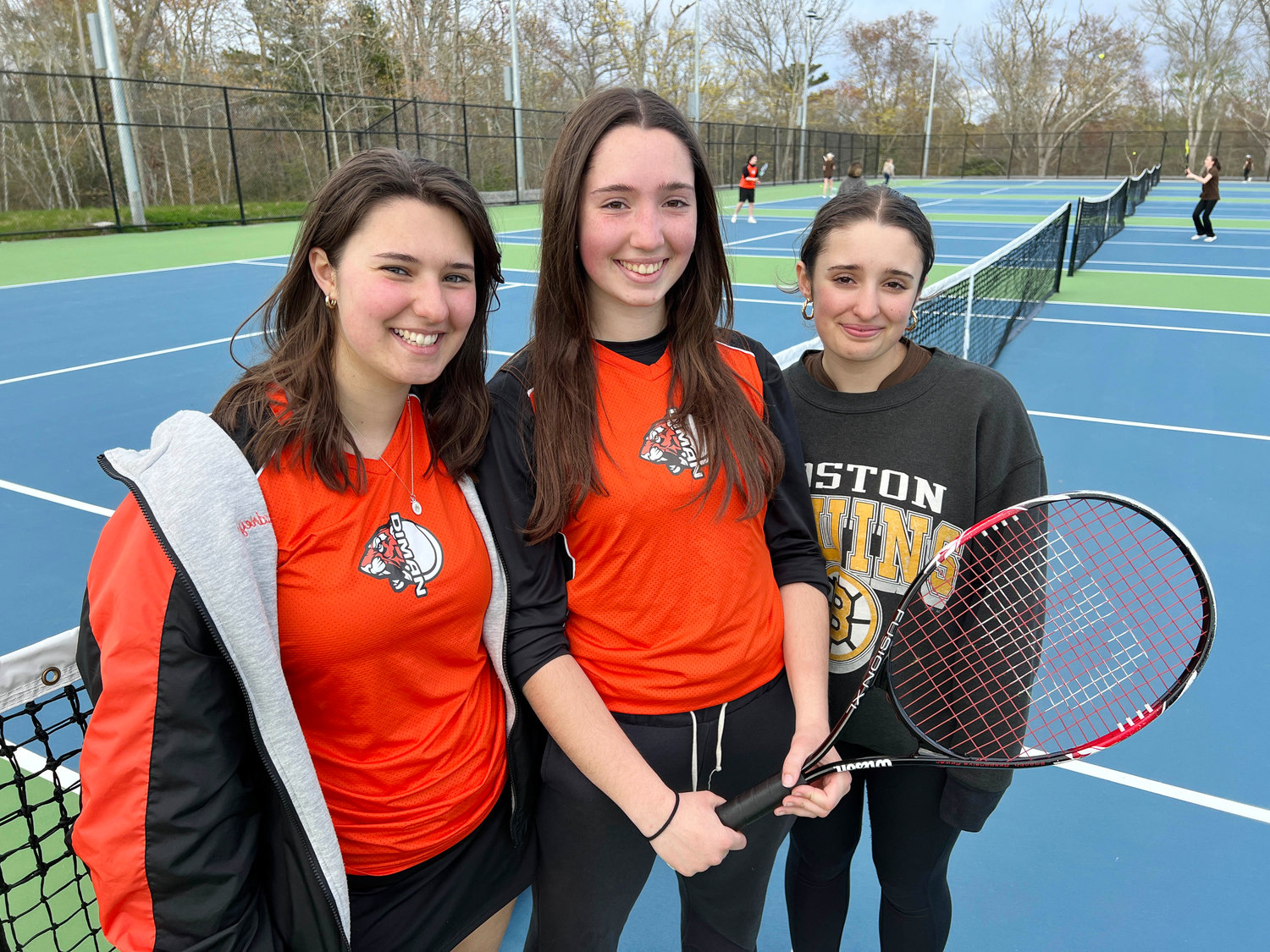 Sarah Moniz (left) and sisters Lindsey and Gloria during a match between Diman and Westport at Westport High School this spring. 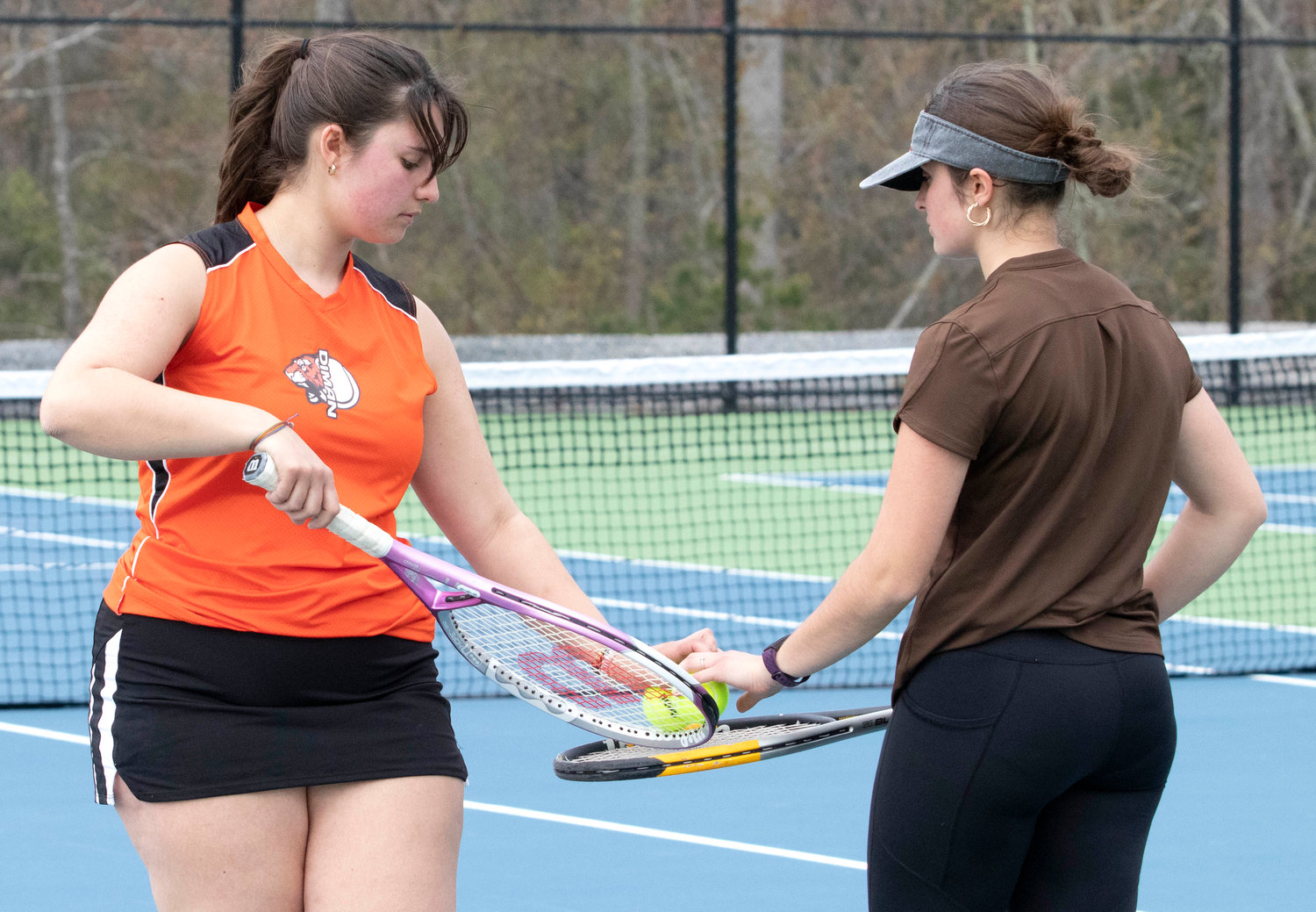 Sarah (left) and younger sister, Gloria both second singles players, squared off during the Diman vs Westport match. The young sister prevailed in straight sets. 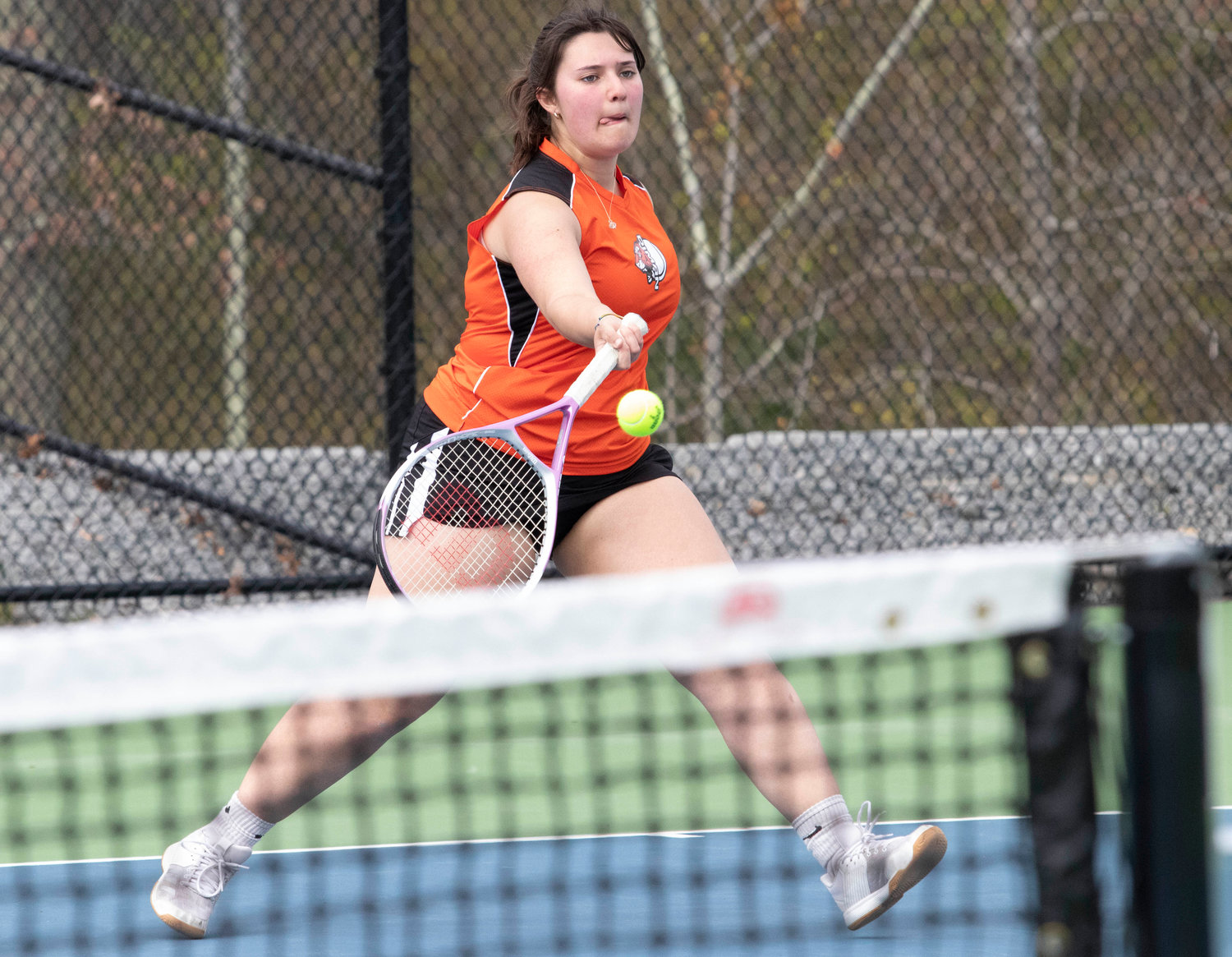 Sarah hits a forehand during the match. 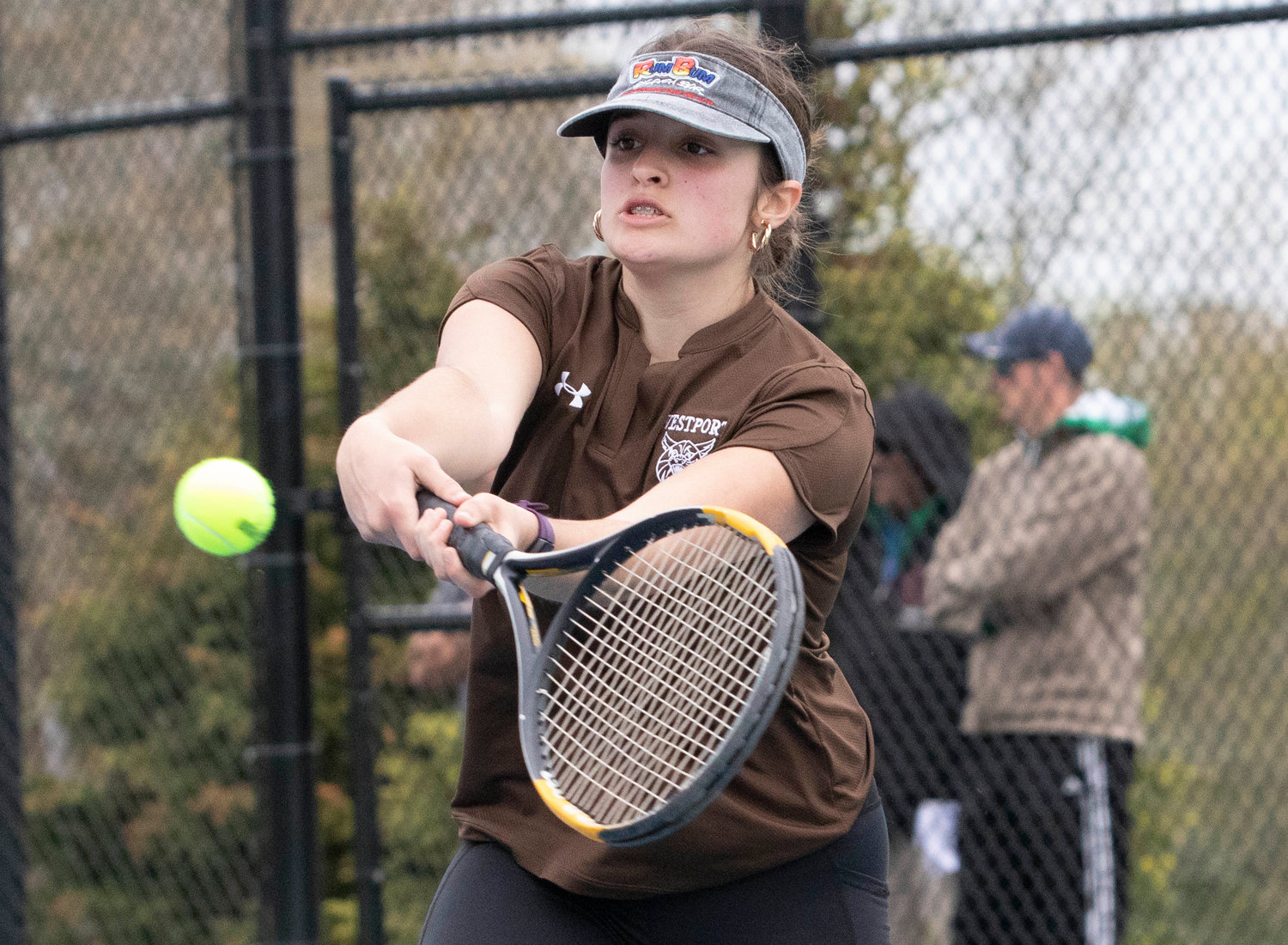 Westport resident Joe Moniz has made learning a trade the law in his household. The last seven of his 10 children have gone to Diman Regional Vocational Technical and his youngest, Gloria, an upcoming freshman, will be heading there next year too.

But it’s not just the shortage of jobs in the trades that intrigued Mr. Moniz. It’s about learning a skill and gaining confidence in oneself.

“They have all seen how they’ve been able to do lots of things and learned skills that they never knew that they really had. It has helped them to decide career paths,” said Mr. Moniz. He and his wife, Lucy have urged their children to try Diman, where they would be exposed to areas of learning they wouldn't be exposed to in a traditional high school.

“We let them decide what they want to learn,” Mr. Moniz said. “For us as a family, we know going to college is a big thing. You don’t always know what you want to do. There may be trades that they might like. Skills that they never even tapped in to.”

Gloria, 14, finished up her last year at Westport Junior/Senior High School on Friday and will join her elder sisters there. Sarah, 16, is taking business tech and Lindsey, 15, is taking graphic arts. Gloria is planning to study in something in the medical field, graphic communications and, or, business tech.

“I am looking forward to exploring all of those shops,” she said. “I’ve always loved art, so I was looking more towards graphics. I’m interested in business technology, it’s important for any field. This year I’ve been into health, athletic training, physical training and nutrition. I’ve grown to really like it. At first I was like, medical stuff, no that’s not for me. I don’t want to be a doctor. Then I realized that there is so much more to the field. I love sports and I looked into what I could incorporate into that.”

Their siblings before them, Isaac, 26, Elijah, 23, Adam, 22, Audrey, 21 and Emily, 19, have all graduated from Diman are and working in their fields or are still in college. The two eldest sisters, Victoria, 36 and Allison, 32, stayed on a more traditional path.

Have to play a sport

Another Moniz mandate is that the children have to participate in sports.

“I make them do sports,” Mr. Moniz said. “I don’t care if you like it or not. You’re playing sports. You got to do all of the seasons.”

Emily now in college at age 19, gave Mr. Moniz the most pushback about playing sports. She liked volleyball, but didn’t want to play other sports.

“When I first got to middle school,” Emily said, “I was really just interested in playing volleyball and I had my mind set on that. I think that I was just nervous to start something new.”

“We made her do tennis and we made her do volleyball, guess what? She played varsity for both sports, freshman year and all the way up. She was the outstanding athlete of the year for volleyball and tennis.”

“My parents have always helped us be hard working people and they pushed us to play sports,” Emily said. “It has helped us stay determined and push ourselves. There are certain lessons that you learn while playing sports, like sportsmanship. That’s how my parents have always taught us. With ten siblings, there is always a little bit of rivalry anyways. It was helpful to have that sportsman mindset on and off the court.”

“If they just sit around then they don’t what they can do,” Mr. Moniz said. “You have to apply yourself. Yes, you might not be comfortable, but you have to do it. We’ve always been a big sports family at home, so I knew she could, but it’s the confidence thing. So for us, I just get them involved in doing things that are going to challenge them.”

Emily fell in love with tennis after playing her seventh and eighth grade years for Coach Matt Kampper at Westport.

She loved it so much, that she wanted to keep playing when she went to Diman freshman year, but they didn’t have a team. So the then HVAC student asked one of her teachers if she could start a tennis team.

“We started off as a club freshman year, then entered the Mayflower league and became a team my sophomore year,” Emily said. “Since then it’s been great.”

Emily, back from a semester at UMASS Dartmouth studying fashion design loved the Diman experience. “I had great teachers. They taught me to persevere. When you are a woman in a trade that’s heavily dominated by men, you have to put your foot in the door and prove yourself. Prove that you’re good and you know what you’re doing. I loved it. I felt that I was able to do that.”

This spring she took in her three younger sisters playing a match at Westport High School. Sarah and Lindsey played for Diman and Gloria played for Westport.

“It’s amazing. It makes me so happy to see them not following in my footsteps, but paving their own paths playing tennis. And it’s great. They seem so happy playing. I’m glad that I could start something that they all enjoy so much.”

Next year, all three sisters will play on the same team.

“That is going to be amazing,” she said about the prospect. “It will be very fun. I am interested to see how the layout falls. Who will play what. Will they get to play doubles together? That would be really cool.”

“I think that they will all be really excited for that as well.”

Sarah who didn’t enjoy playing against her sister this season, is very excited to have her younger sister playing for Diman.

I’m excited to have her on our side,” said Sarah Moniz. “She’s really not fun to play against.”

“Both of my sisters are strong tennis players,” said Sarah. I fully acknowledge that.”

“It has been so much fun,” Gloria said of playing tennis for Coach Kampper at Westport. “I love my all my teammates and I’ve made new friends. It’s going to be hard to leave my teammates. It’s the first team that I have played on. My tennis journey started with them. But my Westport journey is ending. I’m still going to support them even when I’m on Diman.”

Gloria is looking forward to playing with her sisters.

“When I go to Diman, it will be a weight off my chest, because I get to play with my sisters. I will get to go to practice with them and experience being on a team with them.”

Who will win the ladder matches?

“That’s to be determined,” Gloria said.