Owner: Westport's Fork in the Road will fly again

Stolen fork returned Thursday, and owner said he will put it back up after repairs 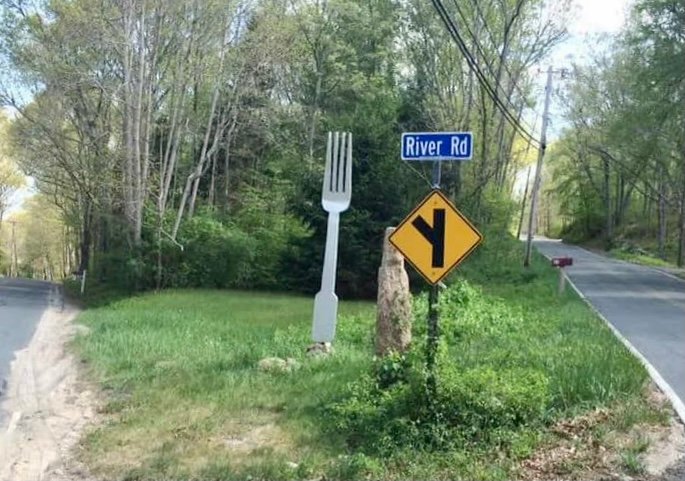 The fork in the road is back, and will fly again.

Tom Schmitt, the Westport resident who along with wife Kate built the  11-foot utensil and planted it at the corner of River and Old Harbor roads 11 years ago, woke up Thursday morning to the welcome news that it had been found, two days after he reported it missing.

Little Compton Chief Scott Raynes said officers working the overnight shift Wednesday into Thursday spotted the fork at "our own little fork in the road, so to speak" — the intersection of Meetinghouse Road and West Main Road.

"They scooped it up and brought it back to the station."

No word on whether officers needed a forklift. Either way,  Little Compton police turned it over to their counterparts in Westport, and they called the Schmitts early Thursday to come and pick it up. It's now safely back in his garage.

"Westport and Little Compton police just did an amazing job," Schmitt said. "I wish all citizens could see how efficient they are. It really boosted my confidence in these public servants."

The whimsical utensil has long since become an icon in Westport, and Schmitt said it's given him immense joy over the years to hear people's reaction to it when they pass by it or mention it to him.

"That's what we were hoping would happen when we built it," he said. That so many people expressed an interest made him feel good about the impact it has had, and shows the strength of the community — the Westport Highway Department even offered to lend him a hand when the time comes to put it back up.

This is the third time the fork has been taken. The first time, it ended up on a pier on the Westport River and the second time, whoever took it managed to get it all the way out to Elephant Rock, where they wedged it in the rock formation just offshore.

The fork did not survive its most recent disappearance unscathed, Schmitt said. A few years ago, Schmitt and some friends poured about a ton's worth of concrete to secure the base. Whoever took it apparently didn't know about the concrete, Schmitt said, as they cracked the handle about halfway up while trying to remove it, before using some sort of saw to cut the metal base.

"The base didn't go anywhere but I think they must have thought they could just pull it over with a truck," he said. "They tried to repair it .... it certainly was not good woodwork."

Schmitt said he will definitely re-install the fork, and said he's got some ideas on how to strengthen the base. What he hasn't figured out yet is what he will do to mark the occasion. He hangs ornaments and decorations off the fork's tines to celebrate various holidays, and said that while he isn't sure yet what he'll do to mark its return, he's got some ideas about that too.

"Maybe a pair of handcuffs?"