At 5:03 am, police and rescue responded to the corner of Canonicus Street and Bottom Street for a hit and run crash that snapped a utility pole knocked over a fire hydrant and lamp … 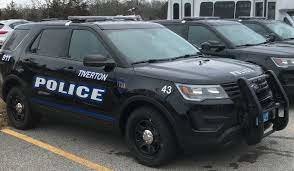 At 5:03 am, police and rescue responded to the corner of Canonicus Street and Bottom Street for a hit and run crash that snapped a utility pole knocked over a fire hydrant and lamp post and damaged a wall.

Police were called with complaints about fishermen on Nanaquaket Bridge and on neighboring property — homeowner asked them to leave but parties are not abiding.

Police received several complaints about blasting shortly before noon in the area of Warren Avenue and Hambly Road.

At 1:54 pm, police took a complaint of Craigslist fraud regarding a rental.

Police responded to motor vehicle accidents on Highland Road (8:27 pm), and on Bulgarmarsh Road (8:41 pm) near the recreation area (8:41) pm. There were no personal injuries in either but a deer was killed in the Bulgarmarsh accident.

An officer went to Muse Way at 9:24 pm for a complaint of children ringing doorbells and running.

At 9:40 pm, police responded to a complaint of people drinking alcohol in the Longplex parking lot.

Ryan Daniel Rigdon, 38, of Fort Lauderdale, Fla., was arrested on charges of domestic simple assault on a person over age 60 causing bodily injury, and domestic refusal to relinquish a telephone, at 2:11 am at a Seapowet Avenue address.

Steven Leon Segura Gibson, 32, of Tamarac, Fla., was arrested on a charge of domestic violation of a no-contact order, second offense, at 2:13 am at a Seapowet Avenue address.

Tracy Marie Bartell, 45, of 121 Persimmon Drive, Tiverton, was arrested on a bench warrant from 2nd Division District Court at 2:58 pm on Main Road.

A barking dogs complaint was filed at 4:57 am on Mark Drive.

8:38 am at Windwood Apartments: Complainant “was driving down the street when he noticed his neighbor was outside with his pants pulled down.”

Police went to the Tiverton Casino at 5:55 to assist with an ejection.

Police were called to Deer Run Road for several complaints about dogs allowed to run around the neighborhood all night long.

Police went to the Dollar General on Main Road at 4:26 pm for a dog in a car with the windows rolled up.

At 12:01 am, police received a call from Riverside Drive about someone running a loud generator outside a van. Police reported that the generator has been turned off.

Irving Stigalt Baxter, 47, of Central Falls, was arrested on an affidavit and arrest warrant from another department, and cited for driving with a suspended license (second offense), at 3:53 am on Route 24 north.

Both vehicles were towed but there were no injuries in a two-car crash on Bulgarmnarsh Road at Luke Drive at 6:20 am.

At 6:39 am, police were notified about work starting before 7 am at Tiverton Materials, Fish Road.

Dylan T. Lefevre, 26, of New Bedford, was charged with obstructing a police officer and driving with a suspended license at 4 pm at the Tiverton Casino.

Police assisted with a casino ejection at 8:32 am.

A Stafford Road resident complained about people dumping debris on the caller’s property.

Tiverton and Fall River police responded to a report of possible gunshots in the area of Willow Street.

Police handled neighbor harassment complaints on Russell Drive (5:35 pm), and Cross Road (5:58 pm). In the latter, caller said a dog is let out to bark at her while she walks in the area.

At 8:43 pm, a caller reported that while she was walking her dog on Ledoux Lane, another dog bit her dog. Both owners were advised to quarantine their dogs.

At 9:26 pm, a caller complained of fireworks near Bulgarmarsh Road.

Jacob C. Oliveira, 21, of 39 Belvedere Drive, Bristol, was arrested on charges of driving  under the influence of liquor, blood alcohol concentration unknown, and refusal to submit to a chemical test at 5 am on Fish Road. Police and rescue had responded to Fish Road at Cottrell Road at 3:10 am for a vehicle that went off the road “deep in the woods behind trees and rocks.” The driver (Mr. Oliveira) was transported to Rhode Island Hospital.

At 12:26 pm, a Crandall Road caller reported that a person is dumping trash on his property with a tractor trailer.

At 2:11 pm, a steamroller struck a police cruiser on Bulgarmarsh Road (no injuries).

Aubrie L. Phaneuf, 34, of Pawtucket, was arrested on a charge of driving under the influence of liquor, blood alcohol concentration of .15 percent or more, at 8:38 pm on Main Road.

At 4:04 pm, a Bourne Mill Apartments caller complained that, a couple of weeks ago, a pizza delivery person forgot to give her $5 in change.

Cars were ticketed at 6:32 pm for illegal parking by the waterfront at Bay Street.

A party with loud music and fireworks was reported in the area of DeCosta Drive at 9:56 pm.

Mason Charles Doughty, 35, of West Warwick, was arrested on charges of obstructing a police officer and driving with a suspended license at 2:17 am on Route 24 north.

At 2:27 am, those at a loud party on Fish Road agreed to turn the music off for the night.

At 5:24 pm, police and rescue went to Fish Road for a two car crash. The occupants declined transport to the hospital.

Jaime O. Vintimillaortiz, 39, of Fall River, was cited for violation of town rules for recreation and open spaces, at 11:33 pm on Fogland Beach. Police had been called there regarding a large fire and fireworks.

At 10:12 am, a car struck a pole, knocking pole and wires to the ground on Seapowet Avenue. There were no injuries; National Grid was called.

Robert Amaral, 45, of Somerset, Mass., was arrested on a charge of driving under the influence of liquor (second offense), blood alcohol concentration unknown, on Main Road at 6:25 pm.

A Hilton Street caller said that someone keeps breaking into his garage.

Andrew Decotas, 26, of 26 Cliff St., Tiverton, was arrested on a charge of domestic disorderly conduct at 1:24 pm at the Tiverton Casino.

Aaron D. Medeiros, 50, of 857 Main Road, Tiverton, was arrested on a charge of driving under the influence of liquor, blood alcohol concentration unknown, at 1:56 pm on King Road.

Richard Blanchette, 59, of Swansea, Mass., was arrested on a bench warrant from 6th Disrtirct Court at 1:56 pm on East Road.

At 9:04 am, a coyote was said to be roaming around the streets near Amicable Church.

At 7:32 pm, an officer reported being in. Pursuit of an ATV “doing wheelies on Crandall Road.” Lost him on King Road.

Police were notified about a man making threats to juveniles on Nanaquaket Bridge at 8:03 pm. Investigating officer reports “misunderstanding.”