Lt. Thomas Plourde, a member of the Westport Police Department for more than three decades, is nearly ready to turn in his badge. The Westport resident always wanted to be a cop, and said he lived … 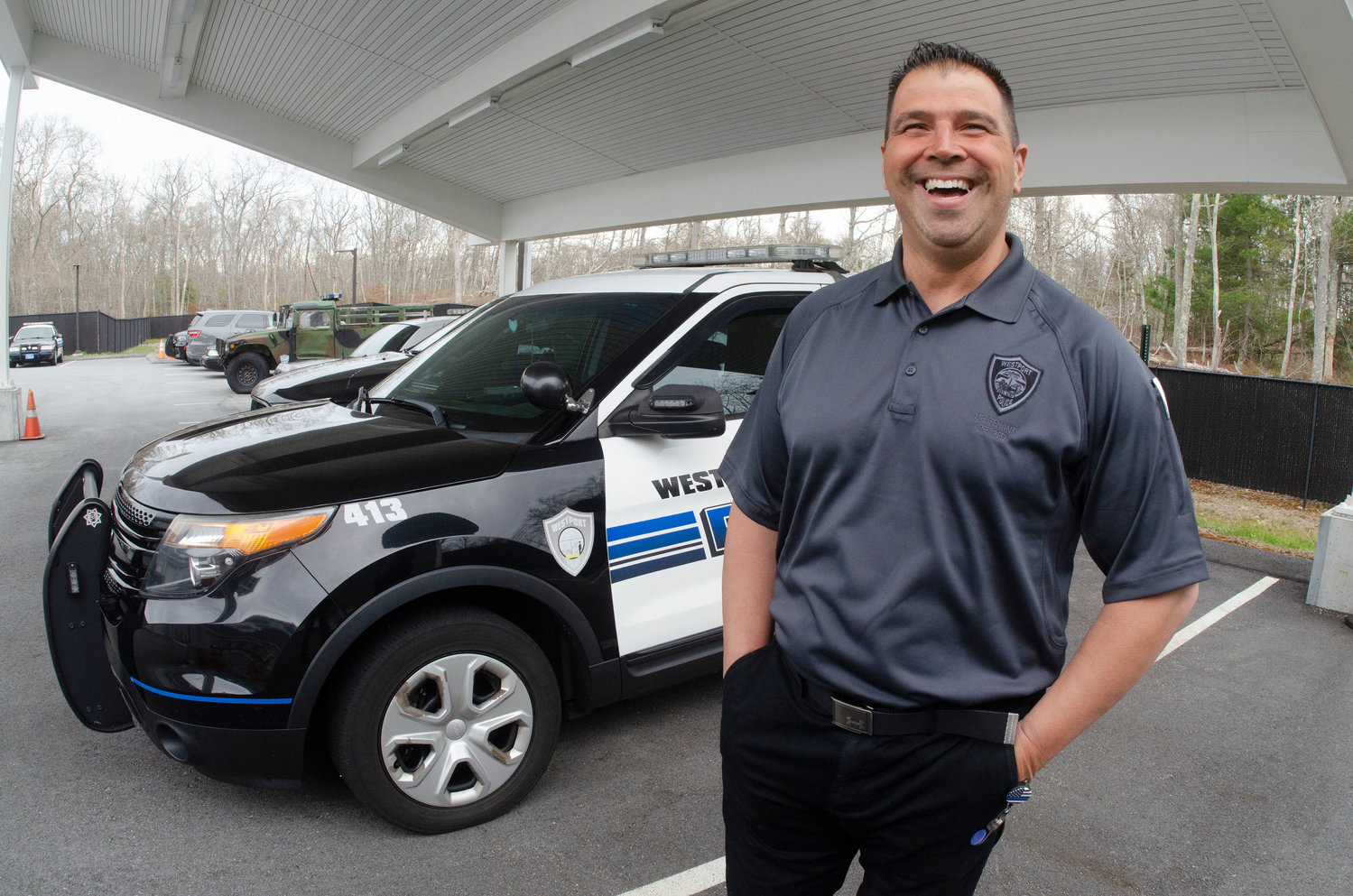 Lt. Thomas Plourde is retiring from the Westport Police Department after 34 years of service to the town.
RICHARD W. DIONNE JR. 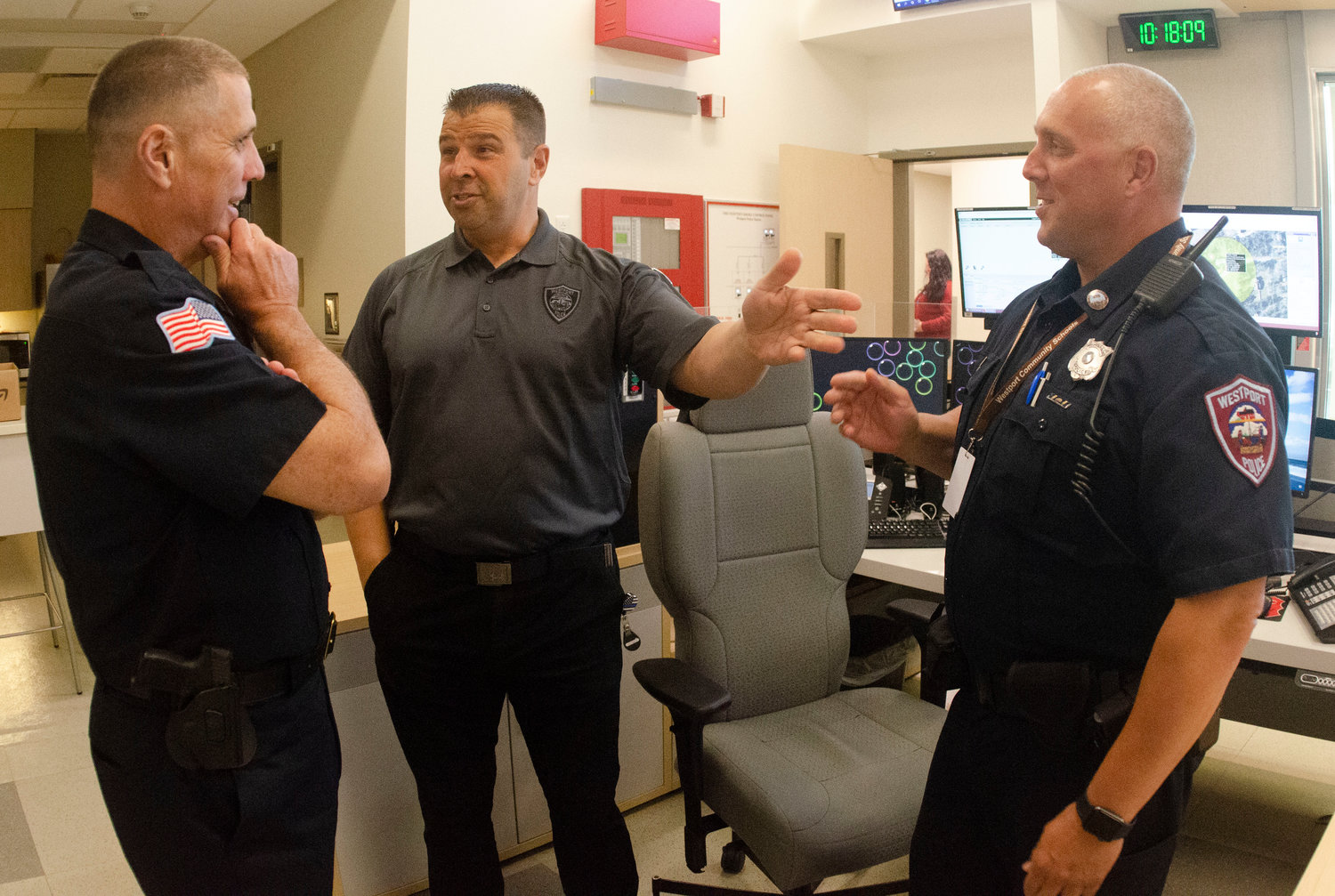 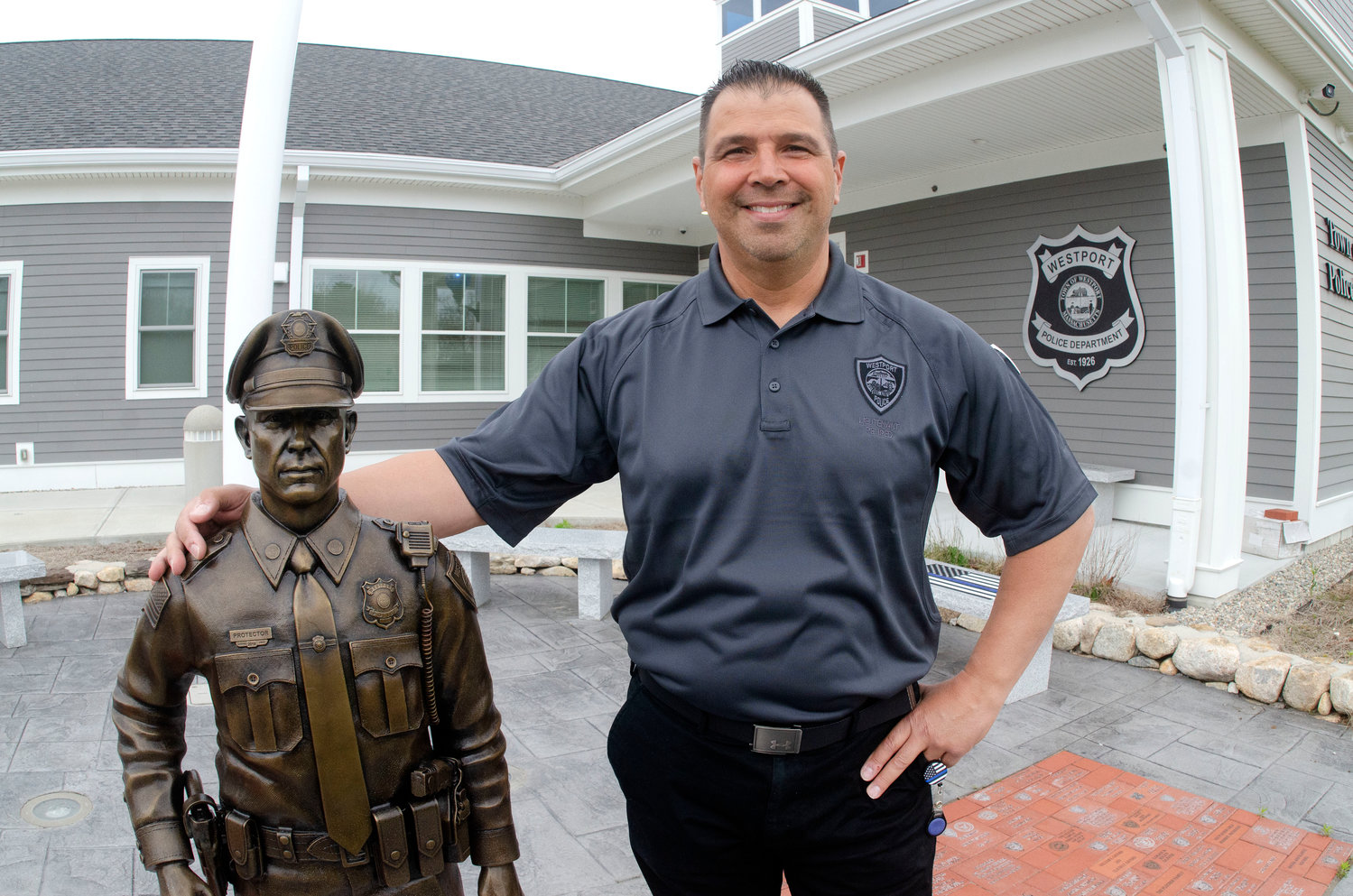 Lt. Thomas Plourde, who was instrumental in the placing of the bronze police officer outside the new police headquarters, has all but retired from the force.
RICHARD W. DIONNE JR.
Previous Next
Posted Tuesday, May 3, 2022 10:11 am
By Ted Hayes

Lt. Thomas Plourde, a member of the Westport Police Department for more than three decades, is nearly ready to turn in his badge. The Westport resident always wanted to be a cop, and said he lived the dream every day he spent on the force. As he slowly transitions into retirement, the 55-year-old said he leaves a department with morale about as high as he's ever seen it, with a good group of experienced and professional officers. Looking back, he has a million stories, he said — "every day was different."

From drug busts to going after drunk drivers, to his early experiences inspecting trash at the Westport town dump and working with kids, he said he wouldn't change a thing.

Where does your retirement stand?

I was going to leave on December 31. But the chief said, 'There's a lot of guys with Covid. You're a supervisor; can you stay a little longer?' So I stayed on until February 1, when Covid started clearing out a little bit. I miss it already! Now I've got my foot in the door, 12 hours a week. I do fingerprinting for (firearms) licenses, I still do road detail jobs, things like that. I'll go when they tell me I have to go; I'll take it to 65, 10 more years.

Why'd you become a cop?

I don't know. I always wanted to, ever since I was a kid watching TV shows back in the '70s. The Rookies, SWAT, Columbo, TJ Hooker,  all those shows. I started off as a reserve officer (and) went to the academy at 21. I started as patrolman, then two years as a detective, then sergeant, and lieutenant in 2019.

Do you remember your first days?

I do! We used to work at the landfill a lot. At the dump, there was a cop working every day, just making sure people who came in with trash were from Westport. My first full job on the department was 1988, The Westport Fourth of July fireworks at Horseneck. They had like 10 of us (officers) down there, thousands of people came down. It was wild."

"I do. It's different every day. Sometimes it's a blur, but every day was something."

Any notable cases you look back on?

I guess it depends on the function I was serving.

As a detective it would be the drug lab, 1998. You can still read about it online, it was a big case. We got some info from an unidentified informant that people were making drugs at this big, big massive house in Westport, Mt. Pleasant Street, at the very end. So me and Deputy Chief (John) Bell, who was also a detective at the time, we started looking into it. Ultimately after a few months of investigation we got a search warrant, a no knock warrant. When we went in they had no idea we were coming. They had gas masks on, it was a full working lag. I remember JB looking at me and saying, 'What do we do now?' I mean, this was a big case and sure enough the DEA came down from New York, hazmat came down, the Department of Environmental Protection came down because they were pouring 55-gallon drums of formaldehyde into the ground. The whole ground had to be ripped up and decontaminated. We were in over our heads a little bit; when we walked in we didn't expect it to be that big. But the chief (former chief Mike Healy) let us stick with the case with the very end.

We arrested three people, and that led me to Florida. I went to Florida with the DEA and arrested another guy; they were shipping the drugs to Florida.

How was the chief to work with?

How about the current Chief Pelletier?

Lots. I was a RAD (Resisting Aggression Defensively) instructor. I really enjoyed doing that. We did it in the old police station downstairs and put about 120 kids through the program, teaching them about safety and things like that. We ended up having to stop because there was mold in the basement, so the whole thing got kind of derailed. But while I was doing that I really enjoyed it.

When I was younger, when I was a patrolman, I strived to go after drunk drivers. I was never a drinker and I wanted to keep the streets safe. I won a MADD (Mothers Against Drunk Drivers) award three years ago.

I've had two car accidents, both when drunk drivers hit me in a cruiser. The first time, a guy hit me in 1996. I had just worked a detail at the old Alhambra's. I was pulling out, 2 a.m., and the guy rear ends me, rolls me into the grass and takes off. I got knocked out, taken to the hospital. We ended up getting him about two weeks later.

We knew it was a maroon car because of the paint on the white cruiser. So Dave Simcoe, one of our guys, he was taking John Bell to get his car worked on. So he's sitting there waiting and he sees, staring him in the face, a maroon Nissan Pathfinder. White paint on it. So he runs the plate and it comes to right where I was hit, off Route 77. So he asks the guy, 'Hey, who owns this vehicle here?'

'Oh, the guy called me and old me to pick it up at his house because he had an accident.'

Long story short, it was the guy. We had the state police check it out and they ended up locking the guy up. He pled out to the charges.

What was the other time?

Second time, I got hit right in front of the old police station, around '02 maybe, '03. I was stopped with an ambulance, they were taking someone out of the house. I got rear ended by an SUV — another trip to the hospital. He was a local guy who hit me.

I've had a couple of knee surgeries, shoulder surgeries. I did a lot of Alhambra's details, bouncing and stuff like that, working the door. I got hurt a few times doing that.

What are your thoughts on Westport as a place to live?

Love the town, love it. Great place to raise a family, great place to work. The town's been good to me, you know? I put my heart and soul into this place but they gave it back to me. They take care of us, and I can't complain.

I don't think so. I loved the job. Every function I was in, I gave it my all. I tried to treat people like I'd want to be treated. We run a tight ship here so I'd talk to people if they needed talking to. I would never come down hard on anybody unless they needed it. I did a lot of internal investigations. It's a great department.

I would say it's as strong as it's ever been. We've got some good patrolmen here."

How did it end up at this point?

I think a lot of it is that we used to only hire from in town. Then we started hiring guys from Fall River, New Bedford, Dartmouth, Somerset, Swansea. So we're getting a larger crew of candidates. We have three or four guys from New Bedford and they have seven, eight, nine years of experience. They're already trained, they're already experienced, they know what they're doing. The department is doing great.

Teach maybe? I've got my master's degree (criminal justice administration) and I may do some investigation work, maybe. I'm going to go back to the gym and start working out again, and spend more time with the kids. It all blurs together, but I love the job. I put everything I had into it. It goes by fast.