From the pitch to the tops of school administration, Joseph Aguiar excelled. 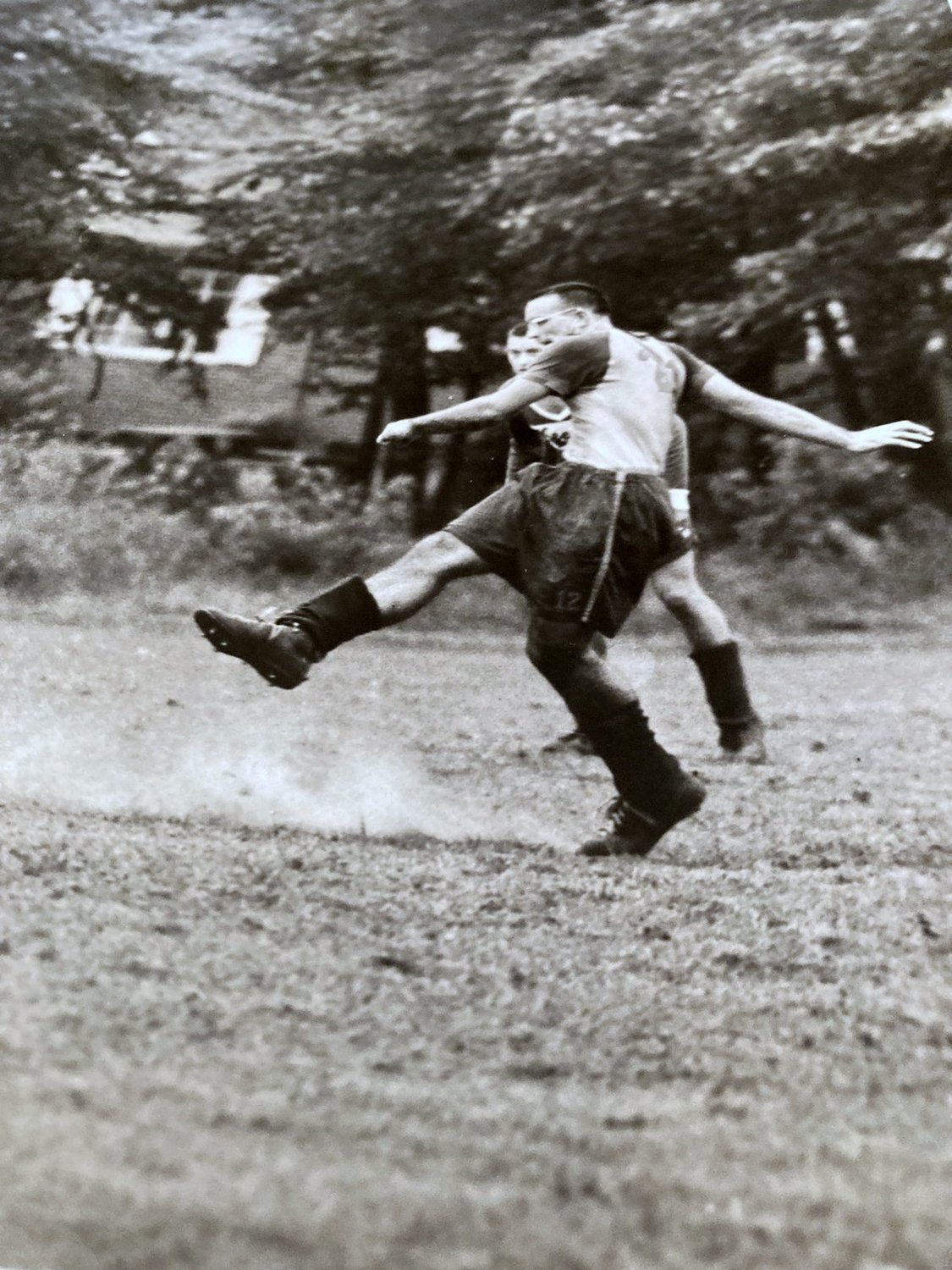 Aguiar excelled in soccer, from his early days playing around Bristol to becoming a Rhode Island College Hall of Famer and member of its 75th Anniversary All Time Soccer Team.

Bristol native Joe Aguiar, now 85, made quite a reputation for himself, first as a great high school and college athlete, and later as an educational administrator.
Manny Correira
Previous Next
Posted Friday, May 20, 2022 2:31 pm
By Manny Correira

You never know who you’re going to run into in the newspaper business. I found that out recently when a friend of mine (Frank Caruso) put me in touch with a gentleman who was bought up in Bristol, but later made his mark in athletics and education in other communities. A remarkable process for this highly recognized man of Portuguese and Italian extraction.

Joseph Aguiar, now 85 years of age and currently residing in Nantucket, began following his road to success as a youngster growing up at 594 Wood St. in Bristol. The son of the late Joseph and Raphaleia Aguiar, he embarked on a career which would ultimately reach Hall of Fame status.

“I consider myself to be very fortunate to be raised in Bristol,” he said the other day in an interview at a local coffee shop. “All of the honors and recognition I have received are directly related to older Bristolians who were role models, served as good examples, and competitive friends who encouraged me to be better than I thought I could be.”

“My interest in athletics began at the YMCA , where we played touch football, basketball, and the 1000-point fitness challenge,” he recalled, “and the Town Common, where we played touch football and baseball. The Y created my interest in track by entering a Bristol team in the Y’s State Track Meet at Brown University. I placed in two events, defeating LaSalle students representing the Providence Y.”

Back in the early to mid-1950s, the former Colt Memorial High School produced some of its greatest athletic teams, and many of its stars were former sandlot and YMCA friends of Joe’s, including Manuel “Pepsi” Fernandes, Manny Marshall, Ray Cordeiro, Jerry Simmons, and Eddie Cordeiro, among others. He always fit in perfectly with that group.

“He was quite the young man,” said Cordeiro. “Chubby was well-liked by everyone and I knew he made a great name for himself in education later in life.”

Ironically, Joe opted to forego an education at Colt Memorial High and instead entered La Salle Academy, where he earned All-State recognition in track and field in the low hurdles and 4x220 relay. He captured two events at the New England Catholic High School track championships — the low hurdles and as an anchor for the 4X220 relay.

Becoming a soccer legend
Joe also had an interest in the game of soccer, which began at an early age.

“I was invited to play with older boys who had recently arrived from the Azores in Portugal,” he noted. “We would play almost every evening at Veterans Park at the end of Wood Street. It did not take long before I could feel they considered me a better than average player.”

As luck would have it, a graduate assistant directing a soccer class at the University of Connecticut asked Joe why he wasn’t on the soccer team with his ability. That opened the door to new adventures.

“I left UConn, returned to Bristol, worked at Collins and Aikman, and joined the Navy Reserve,” he said.

Joe also participated on a team called the Bristol Junior Townies back in the day.

“Some of the players were legendary Bristol athletes,” he pointed out. “I was the starting safety and alternate fullback. I can’t remember the entire roster, but I know Charlie Ouellette, Ed Cordeiro, Ken Cunard, Sal and Chuck Annarummo, Manny Marshall, Buzzy DiRobbio, Jerry Burke, Jim Perry, and Jerry Simmons were offensive starters.”

Eventually, Joe entered Rhode Island College, where he set records as one of the school’s all-time great soccer players. His school goal-scoring record lasted 15 years and the fact that he served two terms as student government president resulted in him being elected to “Who’s Who in American Colleges and Universities.”

Joe was inducted into the RIC Athletic Hall of Fame for soccer and track and was later selected to the All 75th Anniversary All Time Soccer team along with Bristol’s Jim White and Kyle Teixeira.

Educational acumen matches sports prowess
Joe’s professional background is also quite impressive. He taught geography at Attleboro High School, was assistant principal at Westford Academy, Principal at Blanchard Middle School (the first middle school In Massachusetts), a Mott Scholar in Central office doctoral studies at Wayne State University in Detroit, and served as Superintendent of Schools in Ohio for 30 years. He was also recognized by the Ohio House of Representatives for service to public school students.

Once he retired, Joe was called out of retirement by the Nantucket School Committee to increase academic standards at the high school and to improve student and teacher morale and train three interns for administration. All three are now successful principals. He was also honored by the Massachusetts House of Representatives for outstanding service to the public schools and honored by the Nantucket Community Foundation as an advocate for children. He was also named Nantucket’s “Senior Man of the Year.”

A very civic-minded individual, Joe is presently serving a 7th consecutive one-year term as President of the Elder Services Association, a volunteer non-profit which holds assets of a half million dollars to be used to provide physical, emotional, Alzheimer’s, and cultural programs for Nantucket’s senior population.

One look at this remarkable man and it’s easy to figure out that regular exercise is part of his daily routine. He confessed that he weighs less now than he did when he was in college.

As he proudly exclaimed in conclusion, “I could never have imagined that I could have received the recognition that has come to me. And to think, it all started in Bristol."

DeWolf, Towers fuel Bristol-Warren all-stars to back to back wins